Denton Village and Lane Head crossings have not been automated as they are both on single track roads. If an Automatic Half Barrier crossing was installed on such a narrow road, there is the risk of a road vehicle being trapped on the crossing with a descended barrier behind and ahead making the exit too narrow. For such a crossing to have been acceptable when the other crossings on the line were automated, the cost of the road widening to two lanes would have made the project uneconomic.

The key lock instrument is locked and released remotely by the Low Row signaller with a 'Key Lock Release' switch above the representation of the crossing on the panel. It has two positions: Released ('R') and Normal ('N'), each with a light above it. When 'Released', with its light lit, the crossing keeper has control of their instrument and can withdraw the keys to operate the gates at will. With the switch at 'Normal', the crossing keeper is unable to withdraw the keys if they are in the instrument.

A third (central) light labelled 'F' (Free) sits between those for 'Released' and 'Normal' on the Low Row panel; this is illuminated when the keys are in the instrument at Denton Village, the typical position between trains when no road traffic is crossing. This light, along with the 'Released' light being lit, indicates to the signaller that they are free to withdraw the release for the crossing to signal a train.

To withdraw the release, extinguish the 'FREE' light on the Denton Village instrument and prevent the key lock keys being removed from the instrument, the Low Row switch is moved from 'Released' to 'Normal'. Initially the 'F' light at Low Row stays lit, but the 'R' light goes out and the 'N' light lights up. When a route is then set across the crossing, the 'F' light goes off and the signaller can't release the keys by turning the switch back to 'R'. After the train passes the crossing and the route is cancelled, the 'F' light re-illuminates and normally the signaller turns the switch back to 'R' immediately to Denton Village so that the gates can be operated at will (they do not wait for a request from Denton Village).

The final two amendments are: Prior to 2009 resignalling, there was a colour light controlled from the local ground frame at Lane Head (so not all semaphores). Denton Village south gate has been painted white since our Feb 2020 visit. Many thanks to Andy Overton for the additional information.

Lane Head: This very remote, manually worked gate crossing, 45m 38ch west of Newcastle, is a very unusual survivor, on a very minor road. This is, in reality, little more than a byway or cart track, not even qualifying as a yellow 'C' road. The road has 'no motor vehicles except for access' signs and the crossing sees practically no vehicle traffic other than occasional farm vehicles, although there is equestrian and foot traffic. Our visiting members were told that the lane is on Satnavs, and that if there is a problem on the A69, motorists use the lane as a diversion. As the e-BLN pictures show, the lane southward is hardly suitable for road traffic as such and the roadbed between the south side gate and the railway formation is pretty much completely grassed over! It is speculated that the only reason the crossing has not been previously downgraded to a user worked crossing at some point was the poor visibility along the railway due to a bend in the line, coupled with reasonable canting on the track which might lead to a risk of grounding of large agricultural vehicles.

The crossing keeper now operates from a small portable building a little way along the line towards Carlisle on the north side beyond a low walled grassy mound on which a ground frame was once mounted. From a photo on the wall, the modern cabin may be a relatively recent replacement for a very traditional stone crossing keeper's hut between the former ground frame and the crossing itself - no doubt it was easier to crane the new cabin into the space beyond the ground frame while the original cabin was still in use. The adjacent cottage on the opposite side of the road was the crossing keeper's cottage and is still owned by NR, but is presently empty - an accommodation opportunity?

The key lock instrument at Lane Head is visually similar to that at Denton Village, but the method of supervision by Low Row signal box here is very different. If the gates need to be opened for a road vehicle, the Lane Head crossing keeper telephones Low Row and requests the release. Consequently no 'Train Approaching' lights are provided on the Lane Head key lock instrument and there are no 'Train in Section/Train Approaching Section' Absolute Block indicators; the only warning of an approaching train is from the TRUST screen. On the Low Row panel, the Lane Head Key Lock Release switch is usually therefore kept in the Normal position ('cannot open gates') with the 'N' light illuminated and assuming no train is signalled, the 'F' light is illuminated as well.

On receipt of a request for the release from Lane Head, if there isn't enough time for the crossing to be used safely before the next train, then release will be refused. However, if the line is clear with no rail traffic approaching, the Low Row signaller will turn the switch on the panel to Released, the 'N' light will extinguish, the 'R' light illuminates and the 'F' light will remain illuminated. This enables the keys to be removed from the Lane Head instrument to open the gates; the rest of the process is the same as at Denton Village (BLN 1366). As soon as the button is depressed to withdraw the first key the 'F' light in Low Row will extinguish, effectively preventing a train from being signalled. When the road traffic is clear of the crossing, the gates closed to the road and locked, the keys back in the instrument (and the 'F' light illuminated again at Low Row), the crossing keeper will again telephone the signaller who will turn the release switch back to Normal, the 'R' light extinguishing and the 'N' light illuminating.

Here as well, an emergency replacement switch on the key lock instrument allows protecting signals LR7417 and LR7418 on the Down and Up lines respectively to be put back to danger in an emergency.

Lane Head has a call bell in the cabin which rings when bell pushes (of different designs on either side of the crossing) are pressed by a user requesting to cross. The closing procedure for Lane Head was not noted but in the absence of further information, it appears likely that the procedure is the same as at Denton Village, with the gates padlocked to small posts to allow road traffic to cross the line.

Finally, during the Feb 2020 visit, our members were told that Lane Head gate box would be abolished during May 2020. However, it is now understood that this scheme has not gone ahead and there are no longer any plans for it to do so; the current arrangements remain for now.

The current gates seem to be replacements for white-painted ones reportedly present in 2013.
[© Mike Quinn cc-by-sa/2.0 2009] 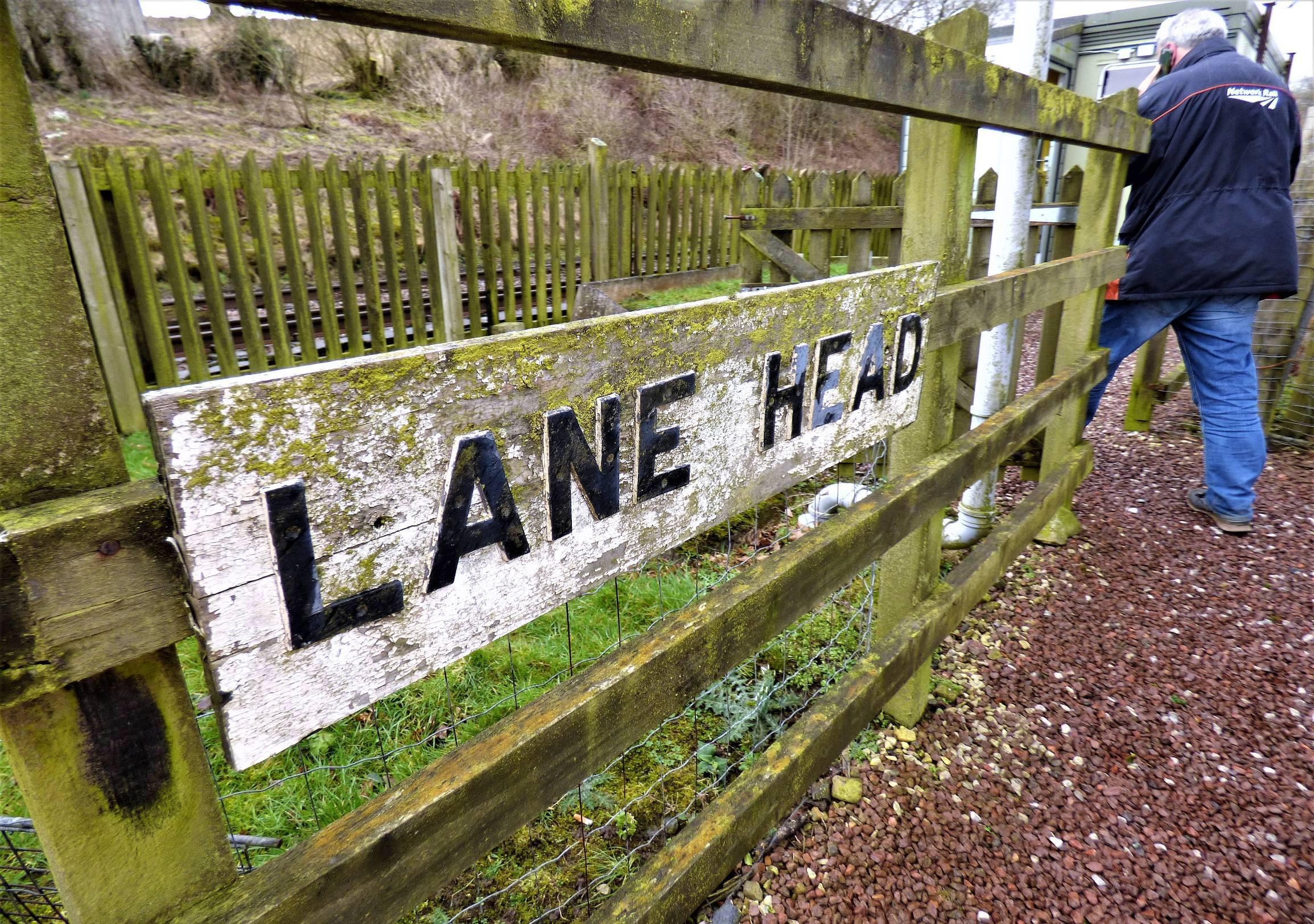 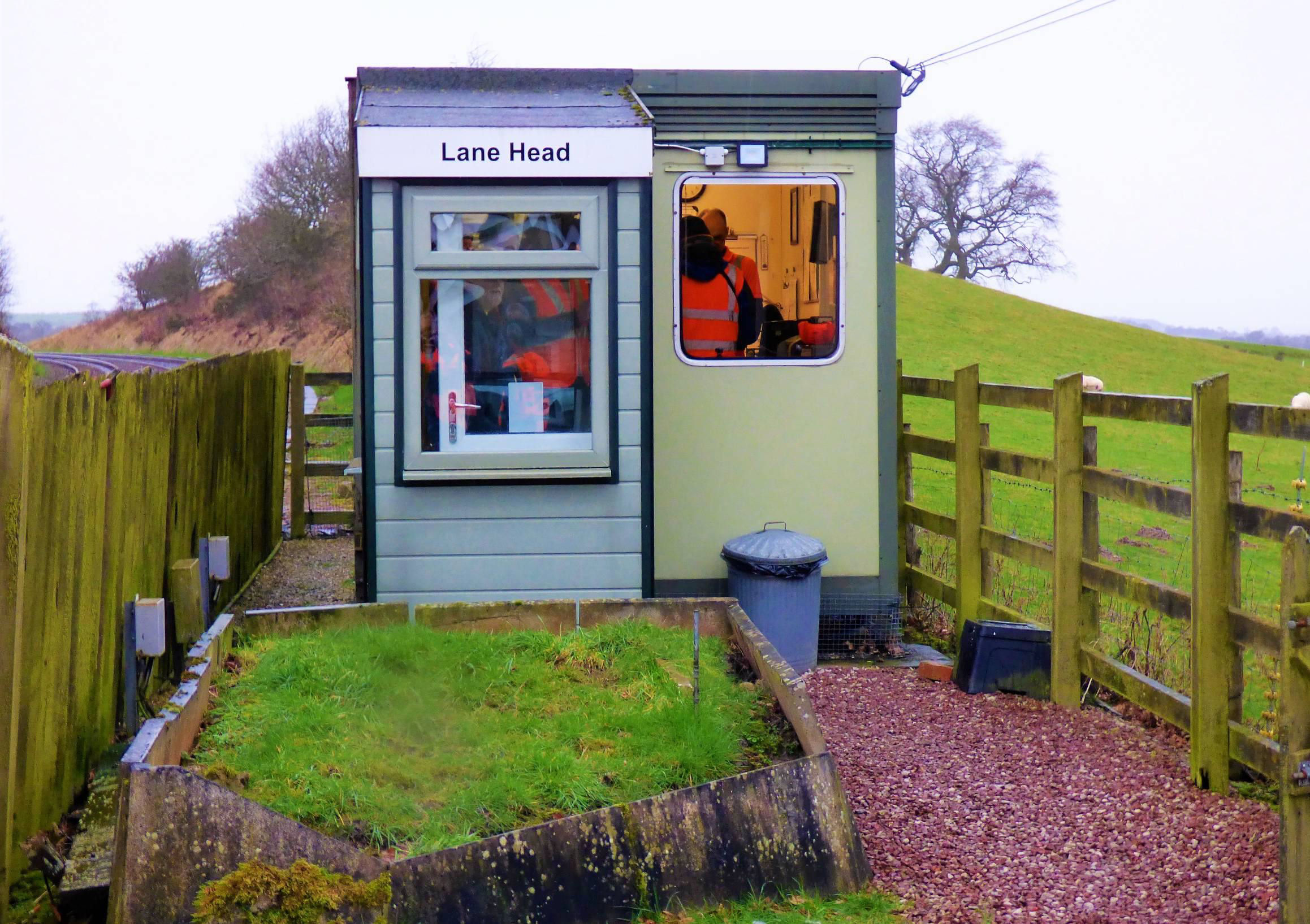 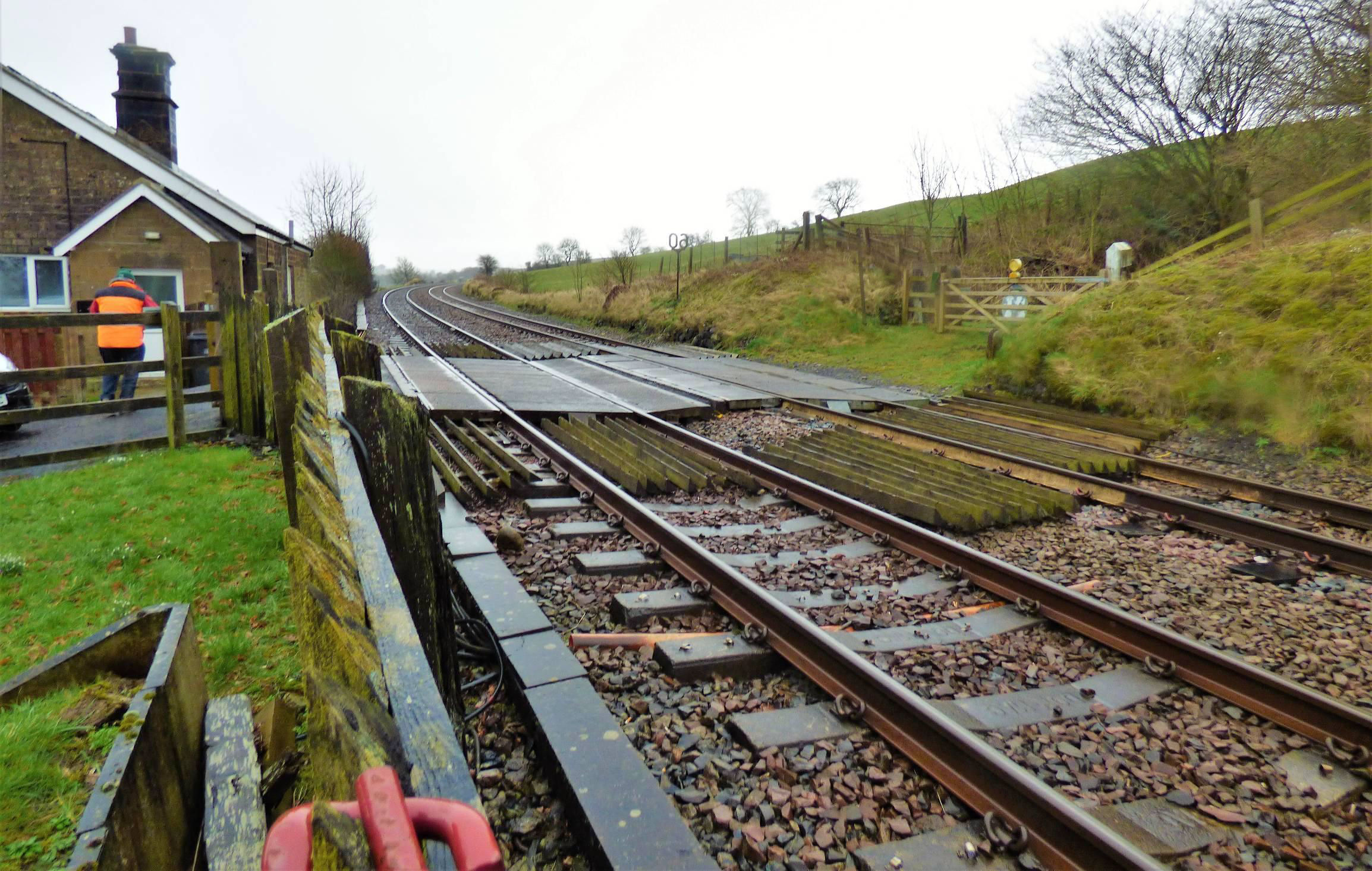 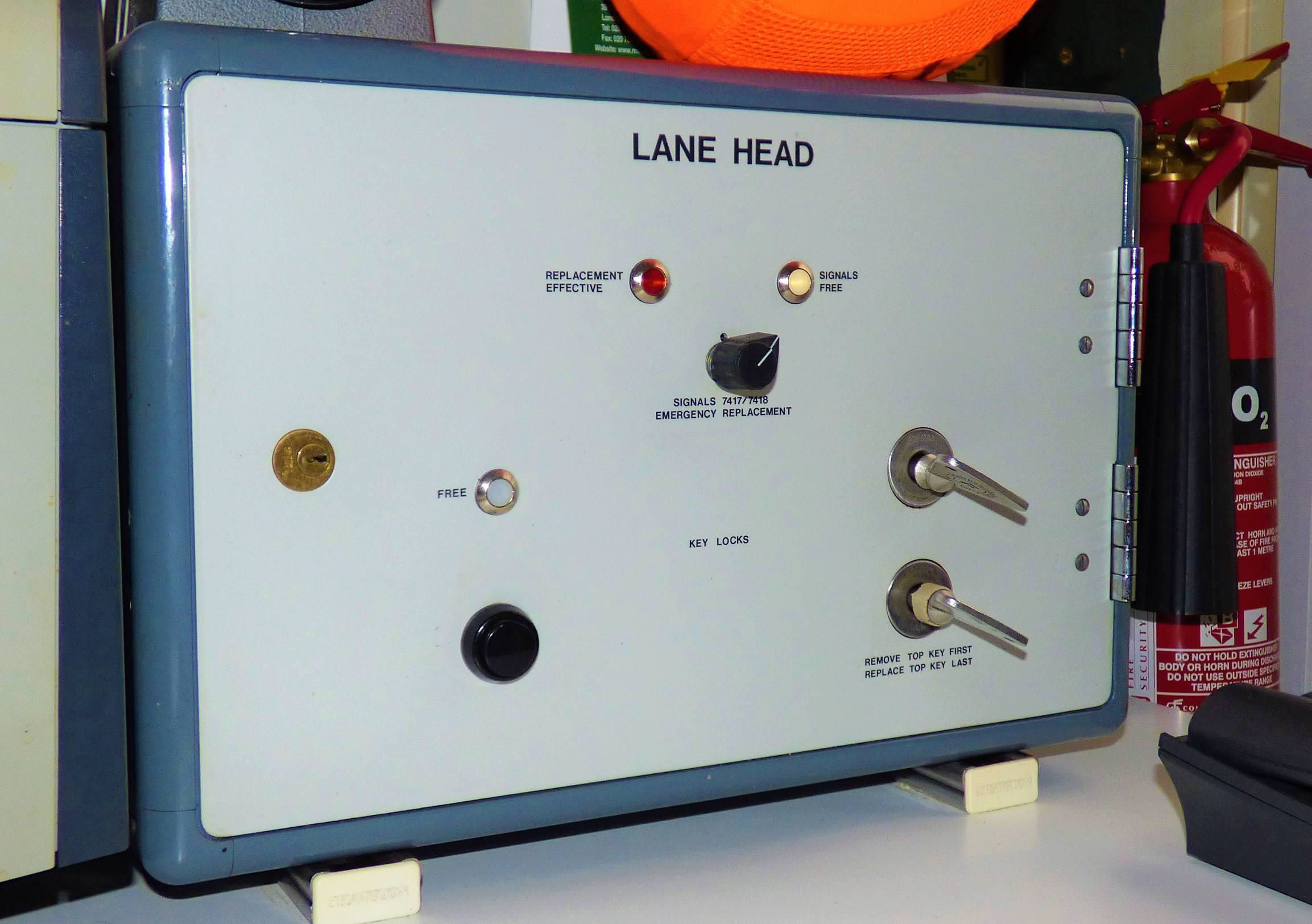 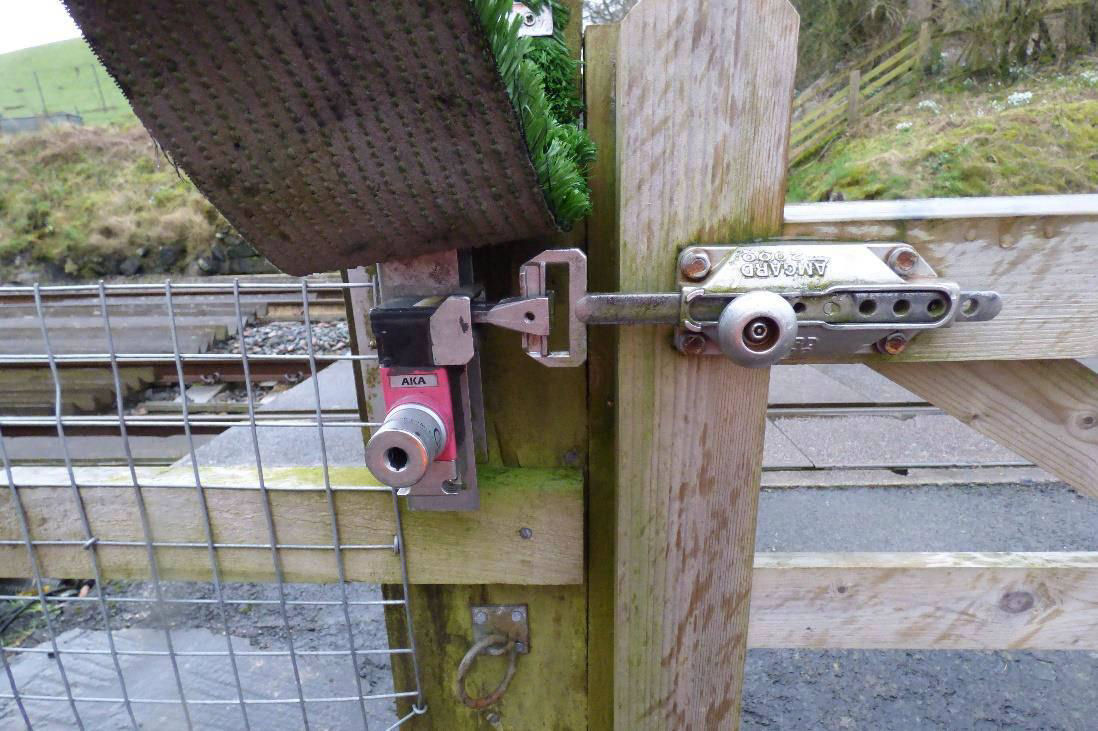 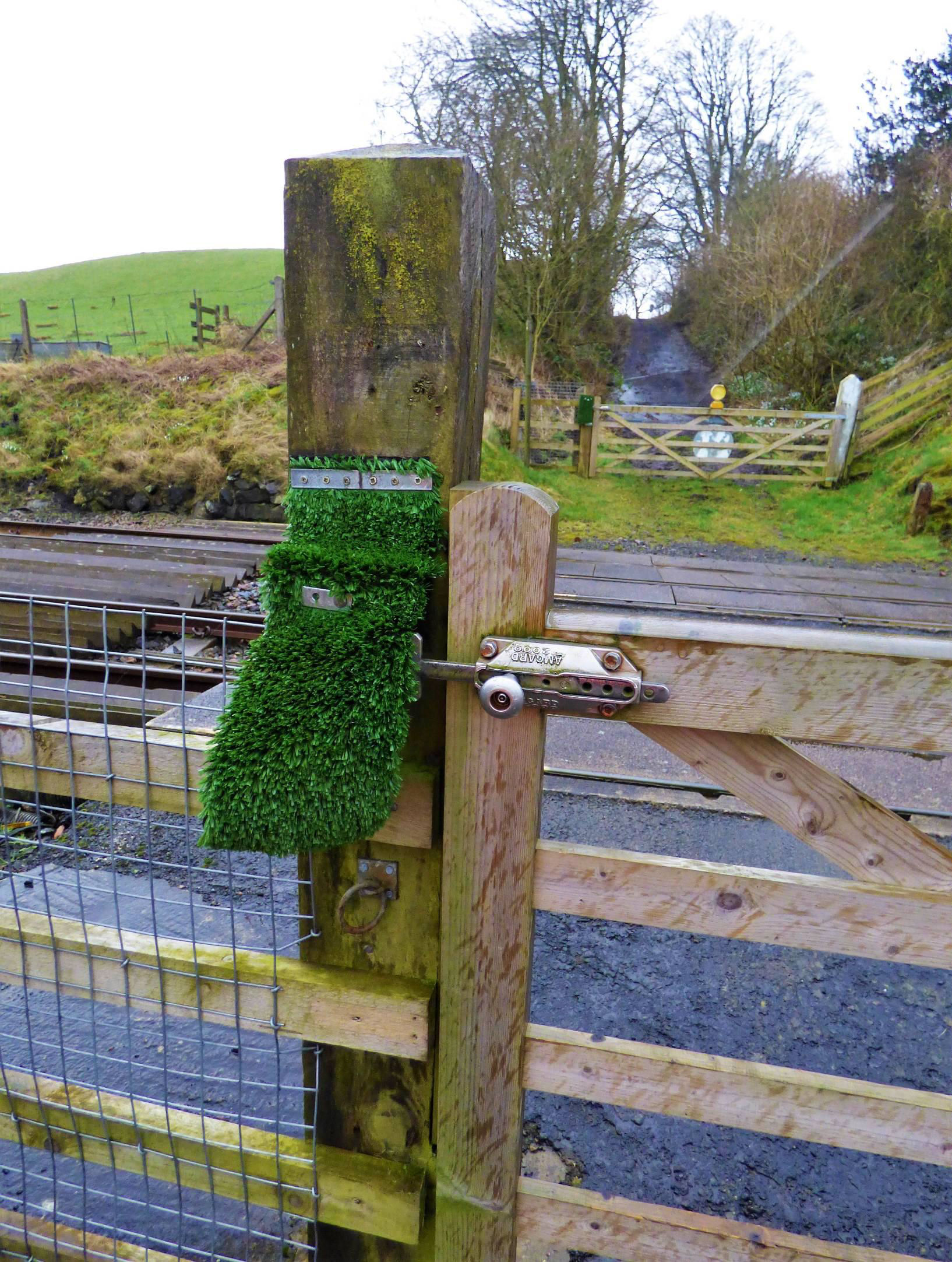 The crossing from the north side with the grassy track.
[© Nick Jones 2020]