This branch, though less than four miles long, and closed over 50 years ago, has a fascinating history. Its principal claim to fame however is that it is the subject of the only detailed descriptive book ever published by the Branch Line Society. Unfortunately, the book was less than a commercial success when it hit the shelves in 1965 and the planned follow-on series never materialised. Search 'Holcombe' on our website archive for a PDF copy.

The branch was opened by the Bury & Tottington District Railway in 1882 and taken over by the Lancashire & Yorkshire Railway (L&YR) in 1888. In 1912, it was chosen to test and demonstrate a new 3.5kV DC overhead electrification system by Dick, Kerr Ltd (Preston) who funded the infrastructure and rolling stock which came into service in 1913. On completion of the tests in 1917, the L&YR converted the branch to their 1.2kV DC side contact system, then used between Bury and Manchester Victoria.

By 1951, this electrical equipment was life-expired and the branch reverted to steam operation until it closed to passengers throughout on 5 May 1952. Goods services ended beyond Tottington in 1960 and the whole branch closed on 17 Aug 1963. A participant in our walk once lived in Tottington and had been there (but not beyond) a couple of times on railtours/brakevan trips in freight days after 1960.

Our excellent socially distanced guided walk (two separate groups of six) started outside Bury Bolton Street Station, home of the East Lancashire Railway, and we made our way north along Castlecroft Rd to reach the site of Tottington Jn where the Holcombe Brook branch diverged from the present Bury to Rawtenstall line. The bridge abutments still exist among the industrial units now occupying the site.

From this point, and as far as Greenmount, the trackbed has been adopted by Bury Council; a surfaced cycle route has been created in stages over the last 20 years with support from Sustrans and the National Lottery Heritage Fund. Locally, the route is known as The Kirklees Trail, but more widely it forms part of National Cycle Route 6 which in fact runs from London to Keswick. Fortunately, the impressive viaduct over the River Irwell survives and we crossed it to the site of Woodhill Road Halt.

Although the branch was steeply graded when built, the gradients are now accentuated by missing overbridges and underbridges, here and also at the site of Brandlesholme Road Halt. The original Woolfold Viaduct over Kirklees Brook was demolished in 1977 and a substantial replacement was constructed in 2012 at a cost of £1.1M to complete the gap in the Kirklees Trail. Using large scale historic maps, we were able to locate the sites of Woolfold station, where there was once a passing loop, and Sunny Wood Halt the most isolated on the line. The heavy vegetation along the formation contrasts with the historic photographs featuring the line in open countryside.

We were fascinated to see thousands of painted pebbles recently laid along one side of the path at Tottington by local children during lockdown. These formed the 'Tottington Snake' which was being cemented in to preserve it for posterity. Around the Tottington station site were various railway artefacts including concrete bases for overhead electrification masts and possibly anchor points for the catenary in the arch of Kirklees Street bridge. The nine arch Tottington Viaduct across Island Lodge was built with piers wide enough for a future doubling of the line but this was never deemed necessary.

The Kirklees Trail comes to an end at the site of Greenmount station. The bridge under Brandlesholme Road still exists but has been filled in. Between here and Holcombe Brook terminus, there is no trace of the line. The cutting has been filled in and was built on during the 1960s and 70s. We made our way along the road to the site of Holcombe Brook station where the only remaining railway feature is the retaining wall behind the buffer stops by the Co-op supermarket. It is a shame that this line, a century ago an exemplar of the latest technology, was not developed and was closed relatively early just before significant suburban development in the area. It could have been a good Metrolink route. The Kirklees Trail was certainly popular with walkers and cyclists during our visit, a very interesting and enjoyable walk. A surprise to most was that there were seven stations and halts in under four miles. 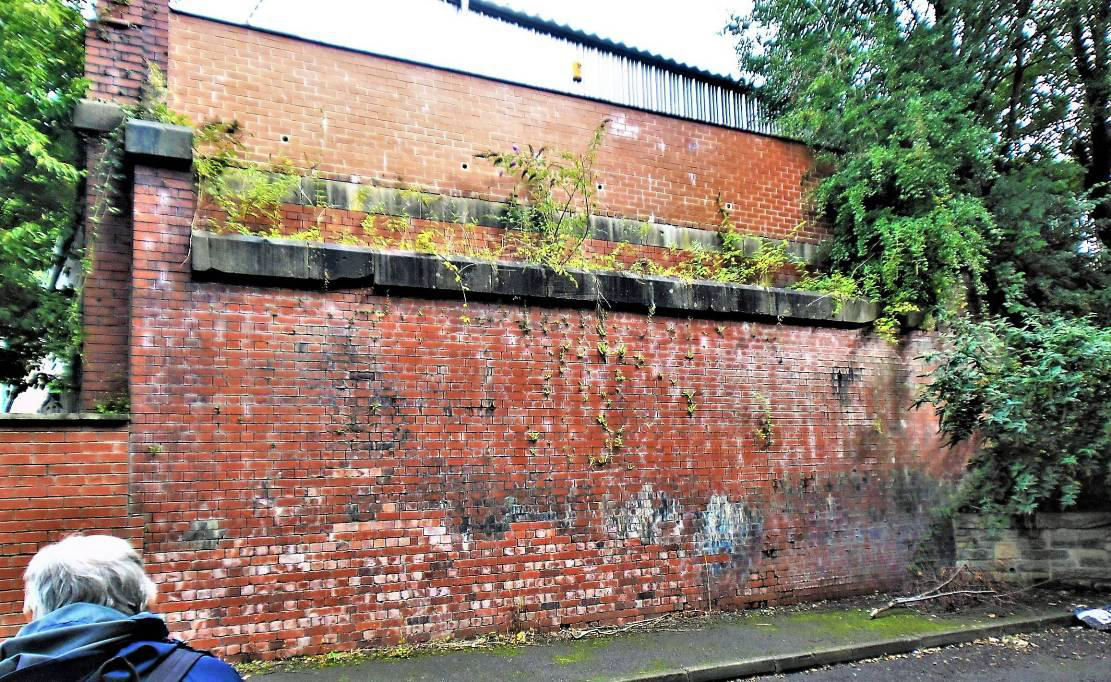 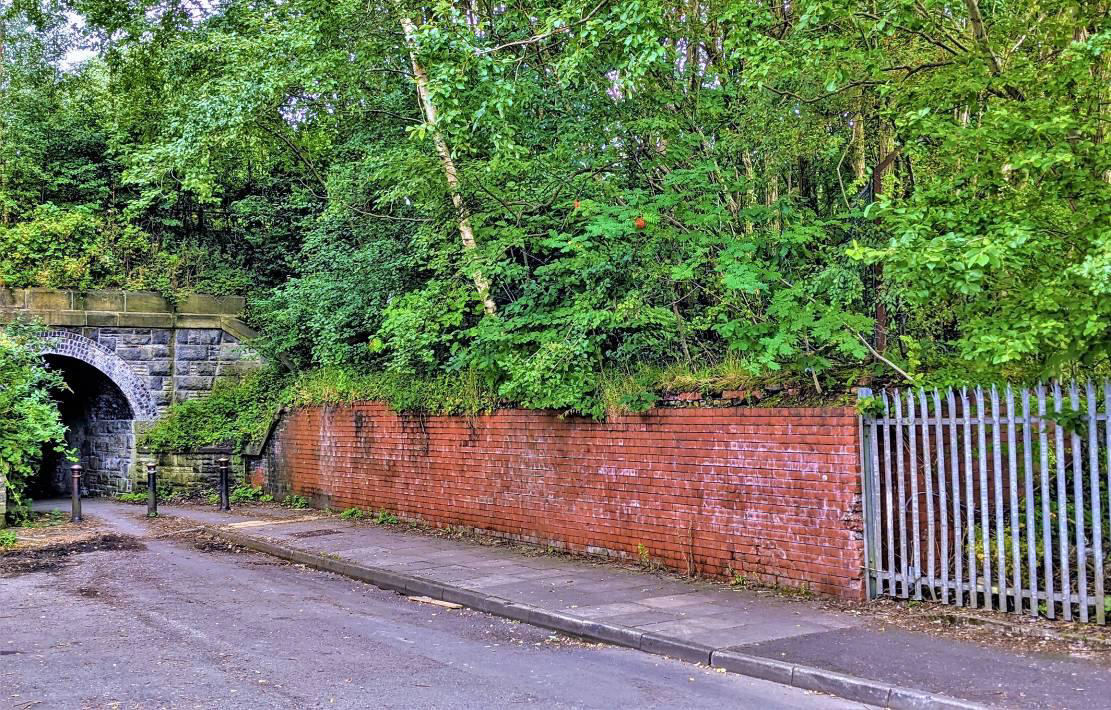 The Bury side abutment of the same bridge as the previous page; left is the Bury - Ramsbottom line bridge.
[© John Cameron 2020] 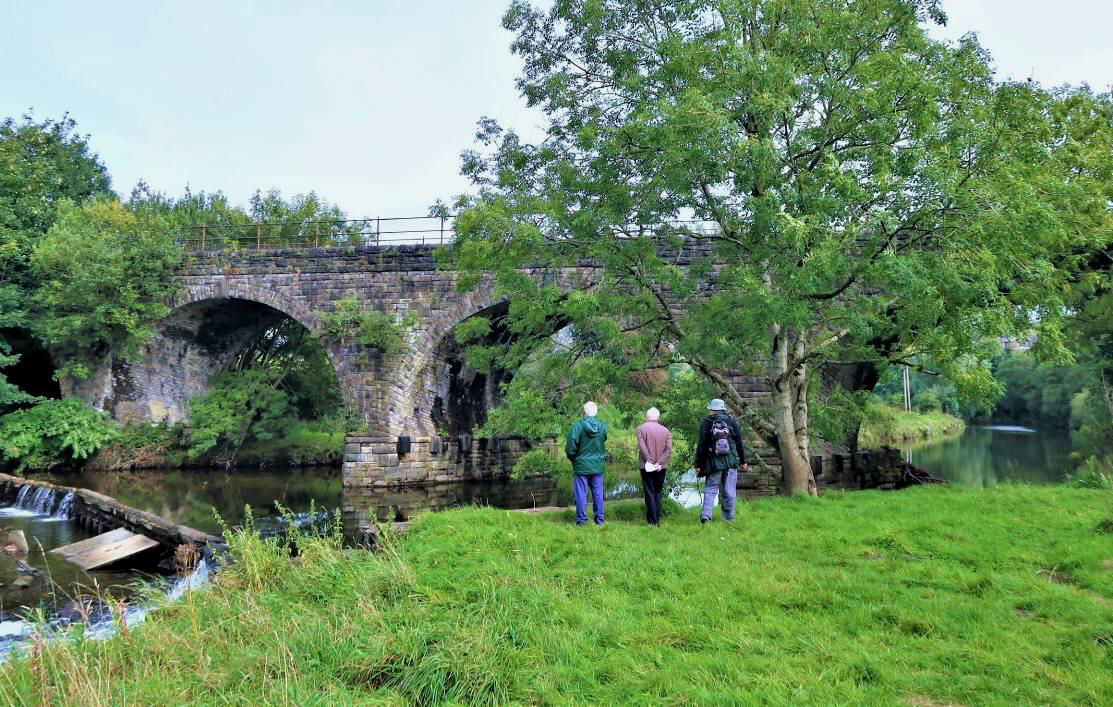 The River Irwell Viaduct which is part of the trackbed walk; Bury is to the right and Holcombe Brook is left.
[© Ian Mortimer 2020] 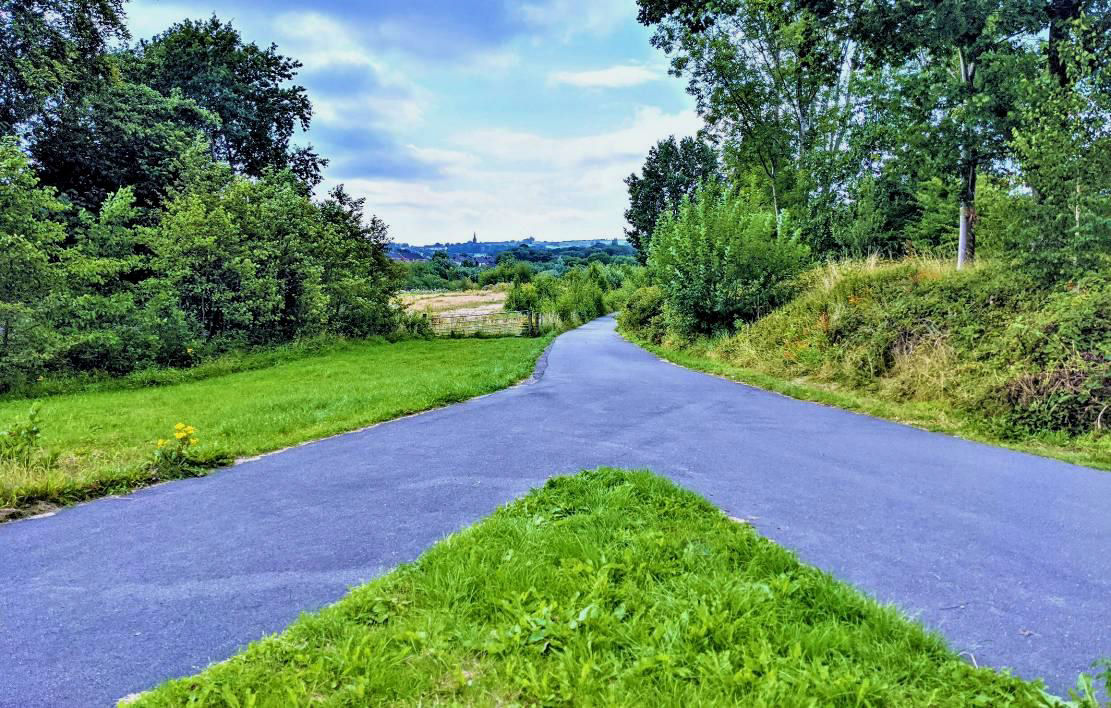 The site of Brandlesholme Road Halt, in open countryside not far from Bury.
[© John Cameron 2020] 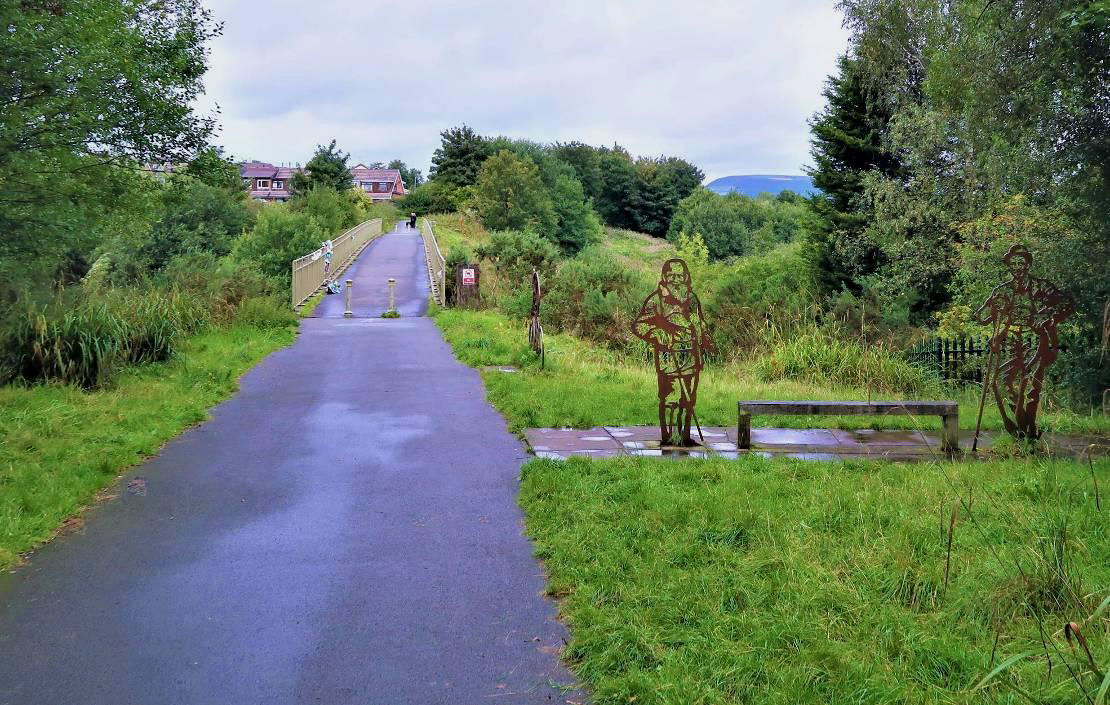 The rail replacement viduct over Kirklees Brook looking along the trackbed towards Holcombe Brook.
[© Ian Mortimer 2020] 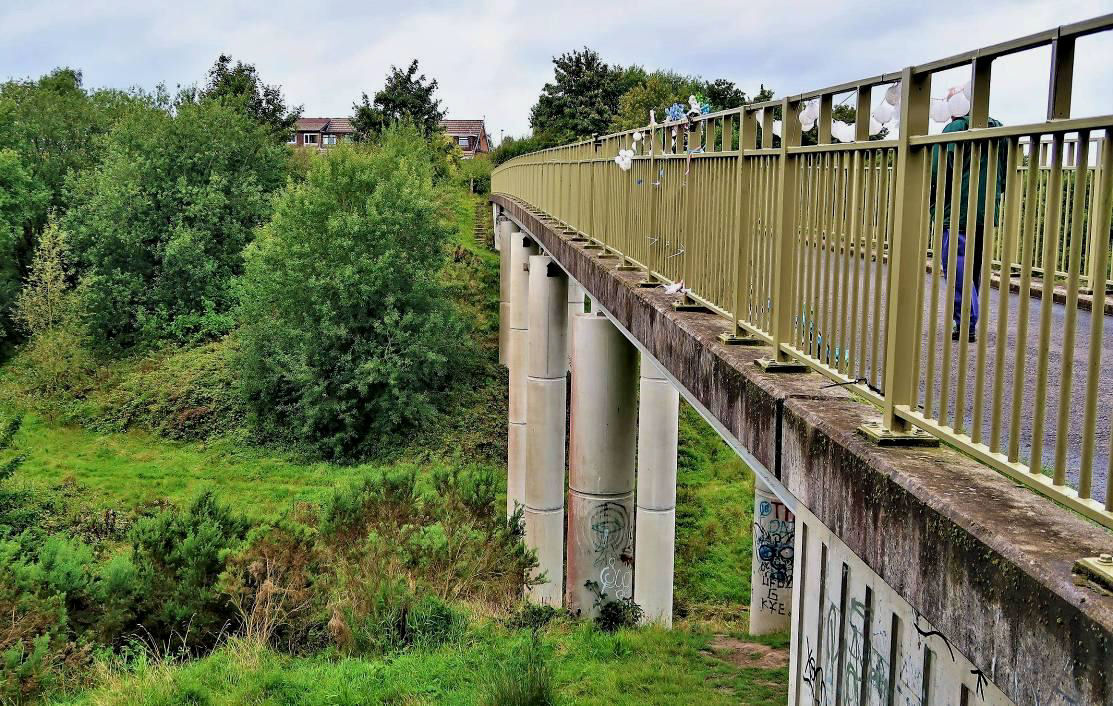 The 65m long viaduct over Kirklees Brook opened on 7 May 2012 replacing Woolfold Viaduct which was demolished in 1974.
[© Ian Mortimer 2020] 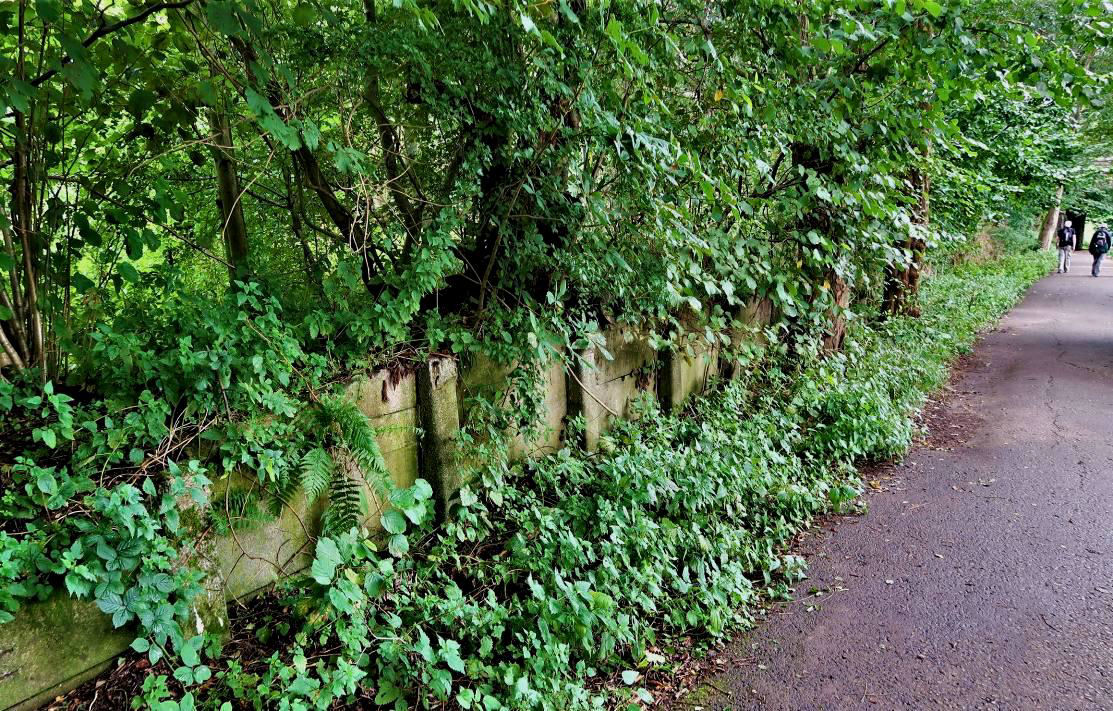 Remains of the station platform edge at Tottington, last used by normal passengers in 1952.
[© Ian Mortimer 2020] 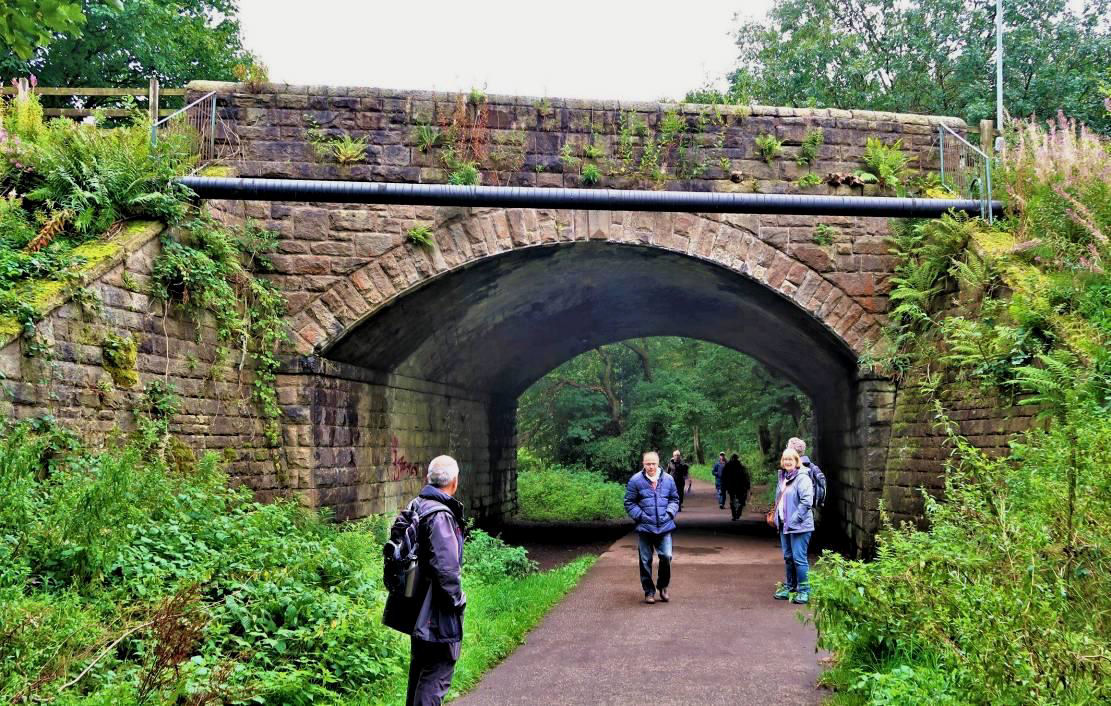 A well built overbridge near Tottington with room for double track; the couple on the right are in the same social bubble.
[© Ian Mortimer 2020] 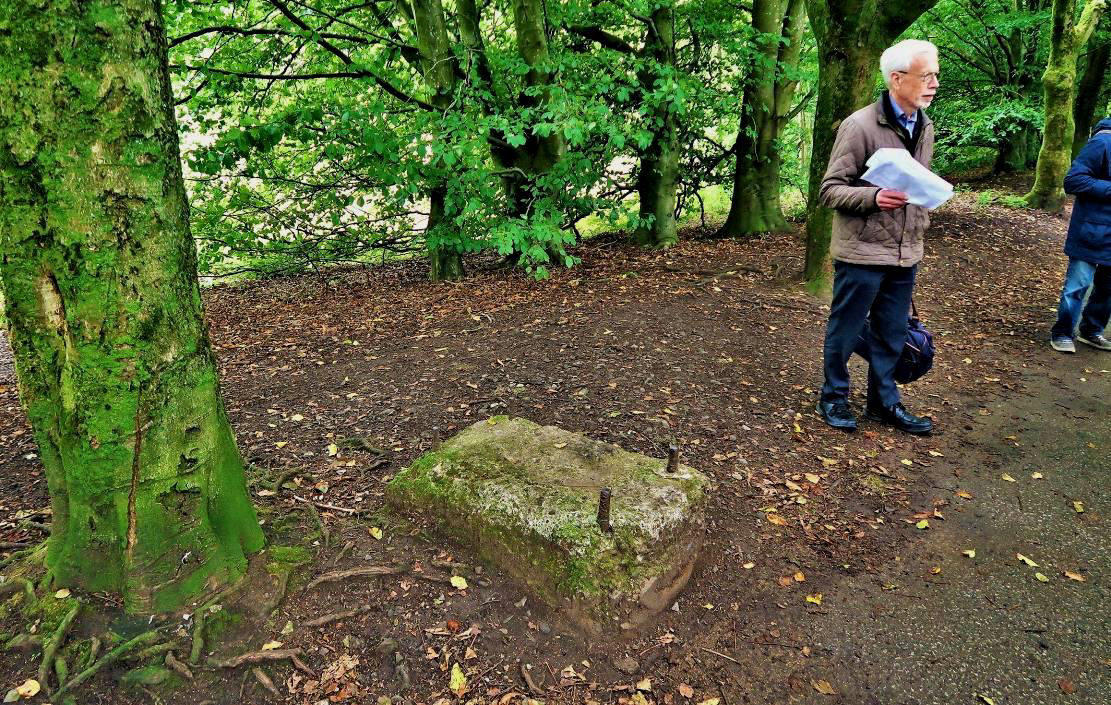 One of the original mast foundations near Tottington from the days when the branch had overhead line electrification.
[© Ian Mortimer 2020] 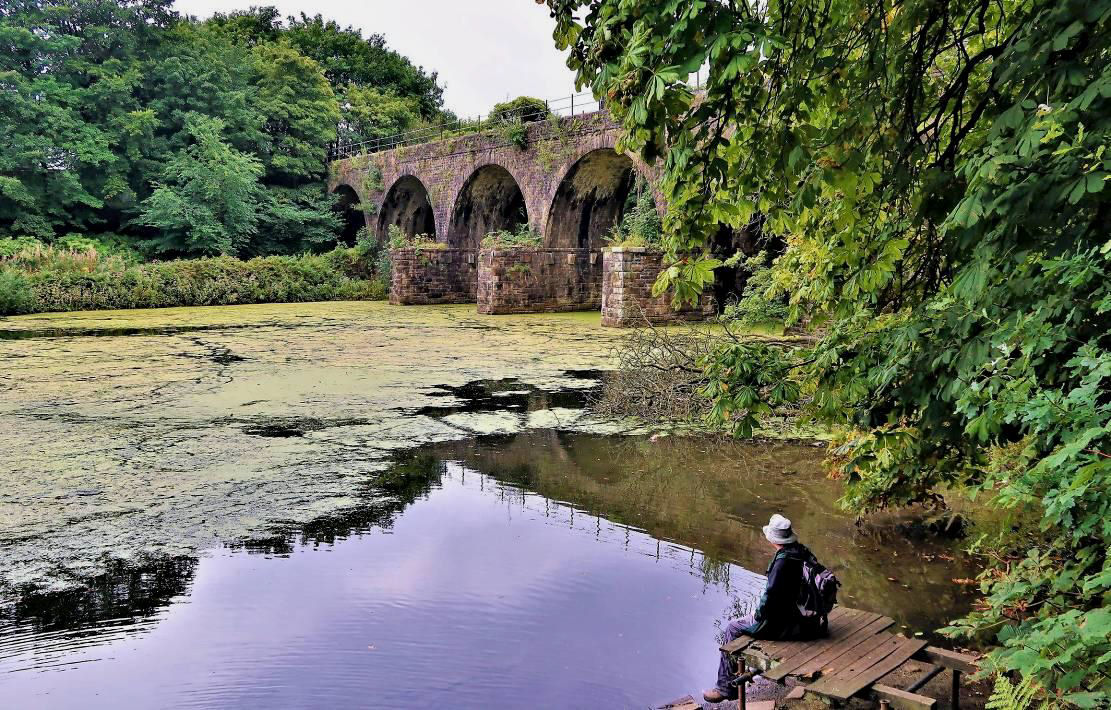 Scholes Lodge Viaduct east side with foundations for double track; Bury is to the left. Our member, bottom right, didn't get wet.
[© Ian Mortimer 2020] 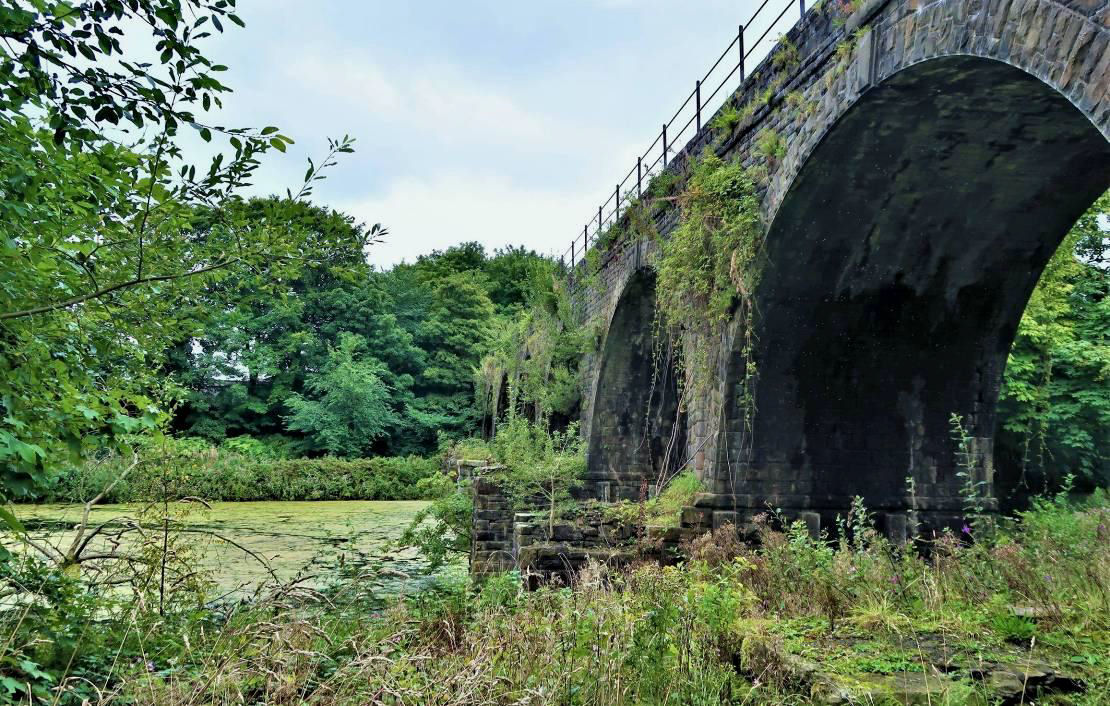 Another view of Scholes Lodge Viaduct east side and the foundations for potential widening, looking towards Bury.
[© Ian Mortimer 2020] 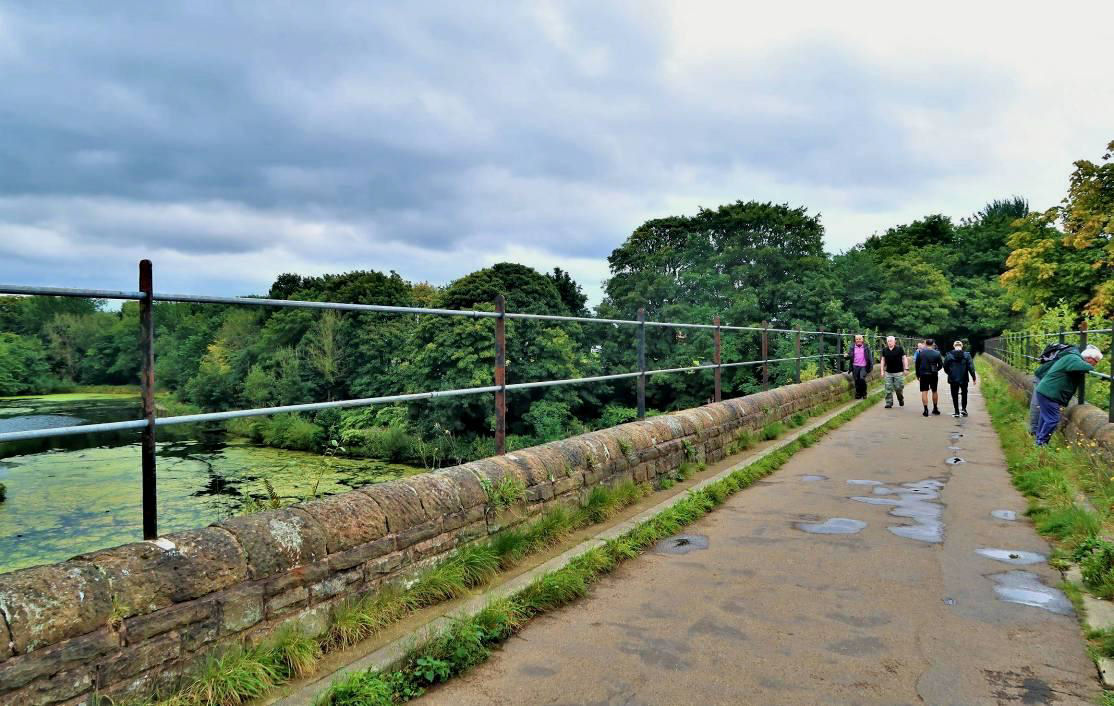 The viaduct - as can be seen this walk is popular with the general public.
[© Ian Mortimer 2020]