The last of the three legs (and not to the IOM), was a single journey to the North West from Paddington (12.27) with unusual moves. While waiting to board our tour I was sat on the bear seat (wearing clothes I hasten to add) by P1, the stewards were busy preparing the train for the day. Then they congregated around the bear statue for a jolly group shot. Did anyone bring the marmalade sandwiches? What is the collective name for a group of BLS stewards? My suggestion is a composite. 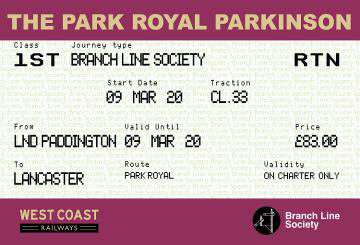 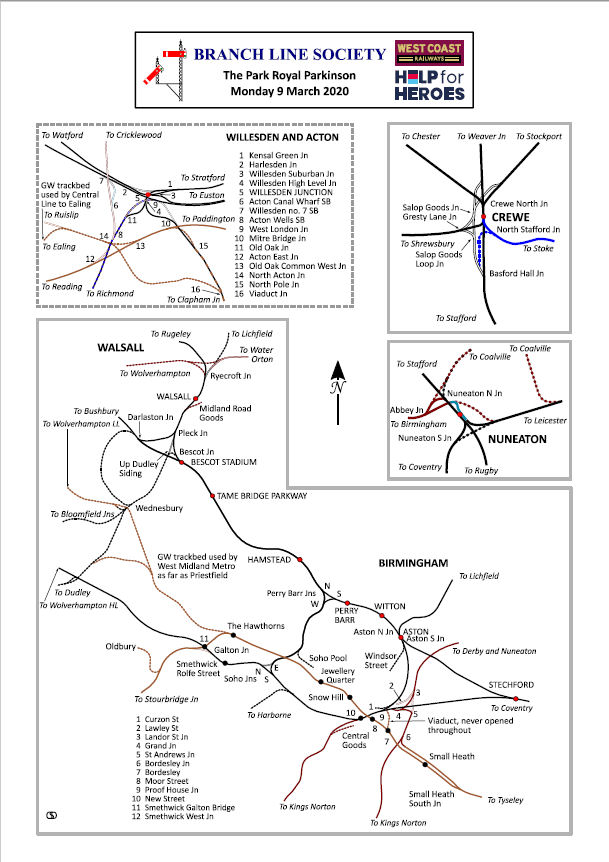 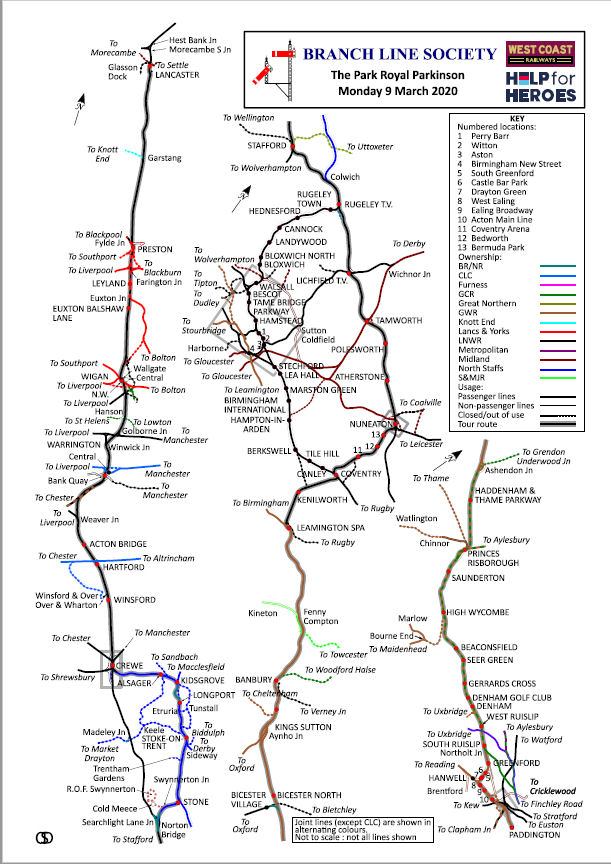 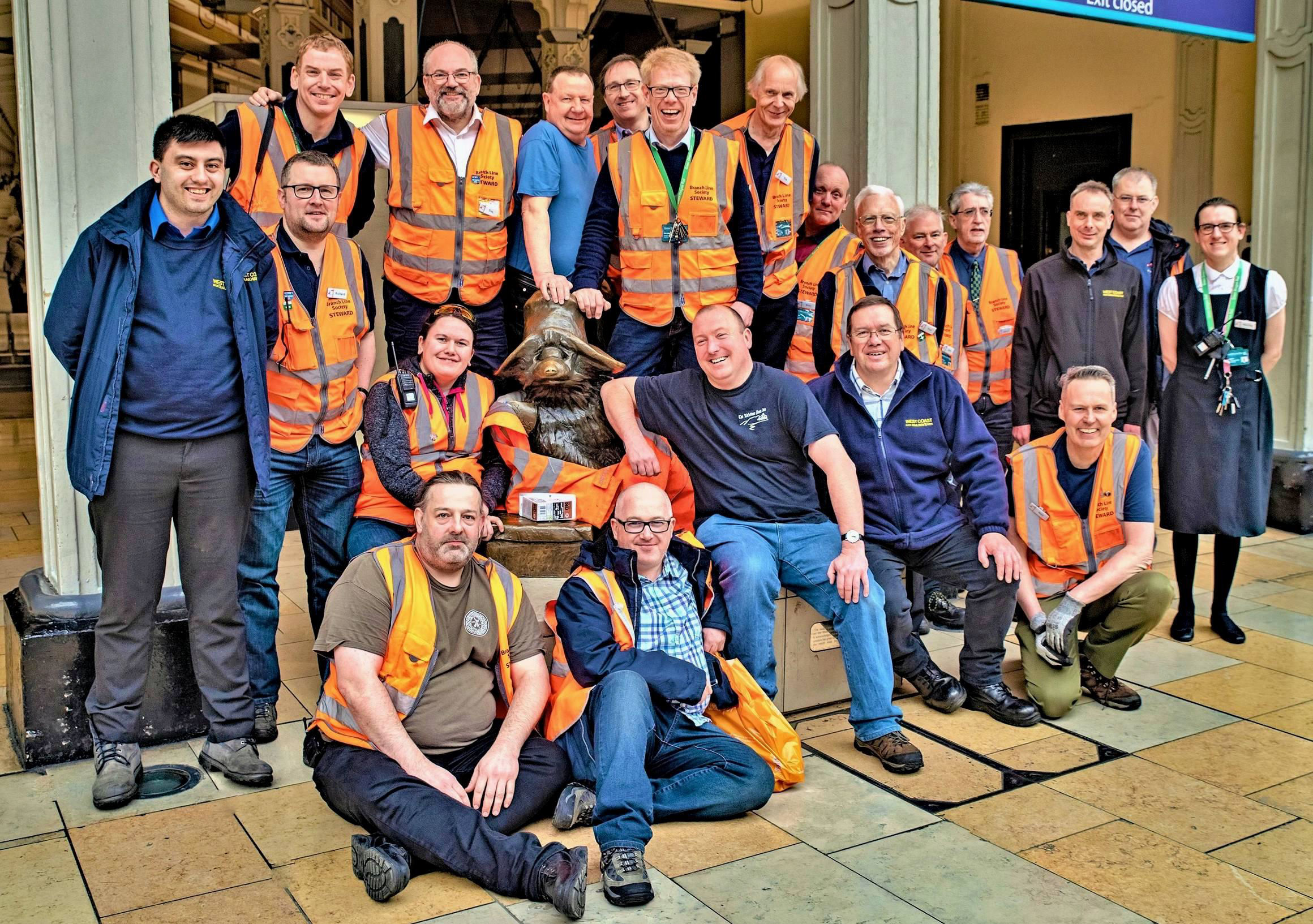 A 'composite' of stewards at Paddington, with that great icon .. Kev Adlam and Paddington (both wearing orange marmalade jackets) before our Park Royal Parkinson on Mon 9 Mar.
[© Geoff Plumb 2020]

47746 on front & 33029 on the rear, the first rare move was immediate: the Link Line (only accessible from P1) and Royal Oak Carriage Loop 'A', then Old Oak Common Flyover and Reception Line 1. We stopped on the latter, next to Old Oak Common Depot site, now flattened - the site of the HS2 station.

To reach the name of the tour we had to go via West Ealing and Greenford South Jn to East Jn. Just past Park Royal Jn there was a sleeper fixed across the single track at 4m 72ch. The line beyond to Old Oak Common West Jn closed (possibly temporarily, possibly for good) from 5 Jan 2019 for HS2 work. However we went sailing past said sleeper - how did the tour manage to do that? At Park Royal Jn it took Park Royal Through Siding to the Tarmac Stone Terminal gate at Milepost 4¼. Well done Kev! Trains run from Angerstein Wharf once or twice a week; the previous one had been four days earlier.

Our tour headed west onto Chiltern territory and north with, encouragingly, much preparatory work to see for HS2 to the east of the line. I sat back and relaxed on the hard seats today (Standard Class). Soon after the usual team of Tim and Paul were selling raffle tickets. An unremarkable journey through the Chilterns followed with plenty of red kites and rain in the air. We passed through High Wycombe, had a brief photo stop at Bicester North and did the Down Banbury Goods Loop at ............... Banbury.

At Leamington, the tour was held on the through line to allow a freight and an all stations (quite a few nowadays) service to Nuneaton go ahead on the single sections to Coventry. This caused late running and some concern. There was a Coventry set down but before unusual track. Reversing into Coventry Carriage Sidings, our tour reached the stop blocks via No4 Siding (the most significant) in fact only No3 and No4 are useable now. Back into the station, a brief pause, and it was across and through Coventry North Yard (making up for missing it on our Type 3 to the Sea tour) and northwards to Nuneaton.

With the goodies over, the train emptied at Stafford then ran via Stoke and Crewe, to Preston, where I left. Goodbyes to all, see and you again on Friday (6 tours in 10 days!) A very good trio of tours, well done Kev and the team including all working behind the scenes on bookings, itineraries, tickets, maps, decals etc for all their hard work. With £4,500 raised for Help for Heroes Charity, it was all worth it. For those who did the tours start to finish it was fantastic value, a 3-day fare of £149 for 916¼ miles.