The middle trip was a full day out from London to the West Country and back. Our tour left Victoria P7 on time with two Cromptons, 33207 & D6515, at the front. The first move was the connection across to Victoria western side and then Fast line through Clapham Junction, switching to the Slow at Balham, before a routing via Tooting to Wimbledon. 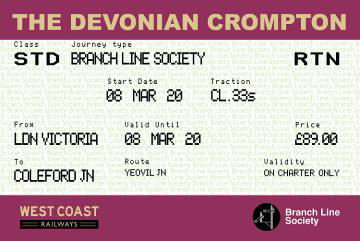 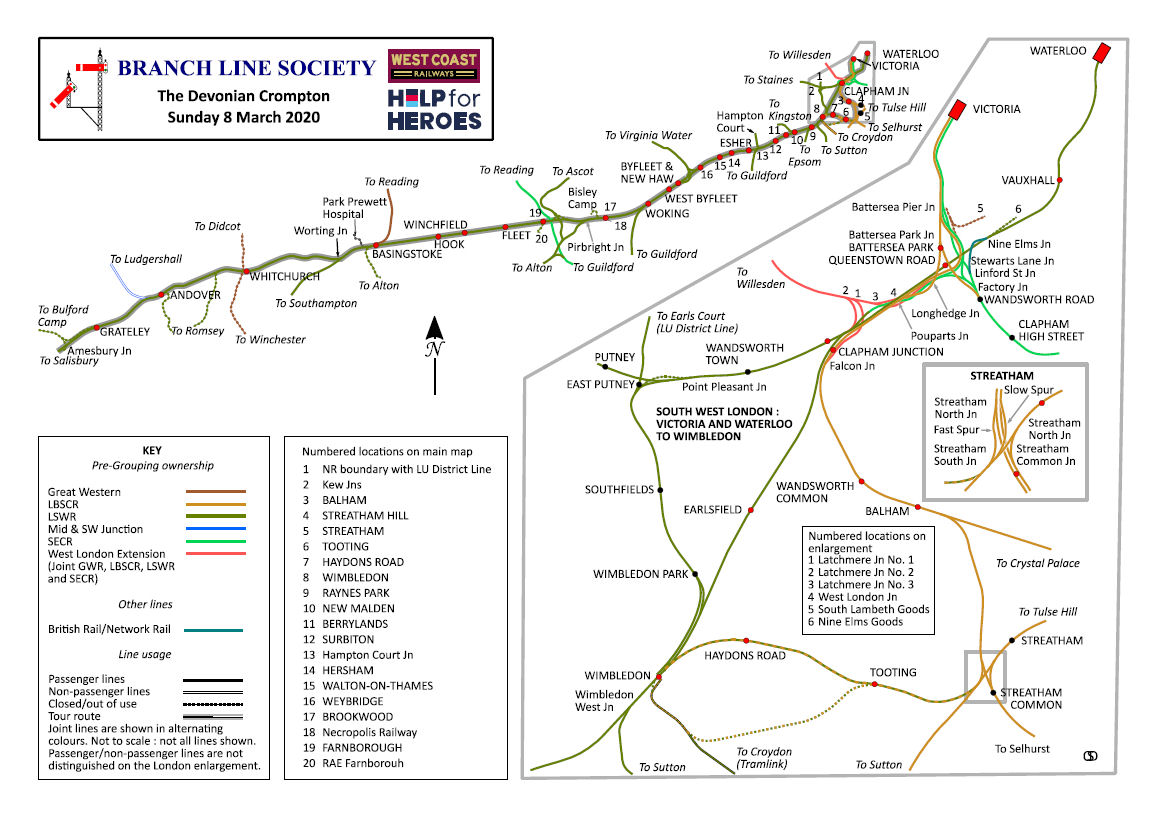 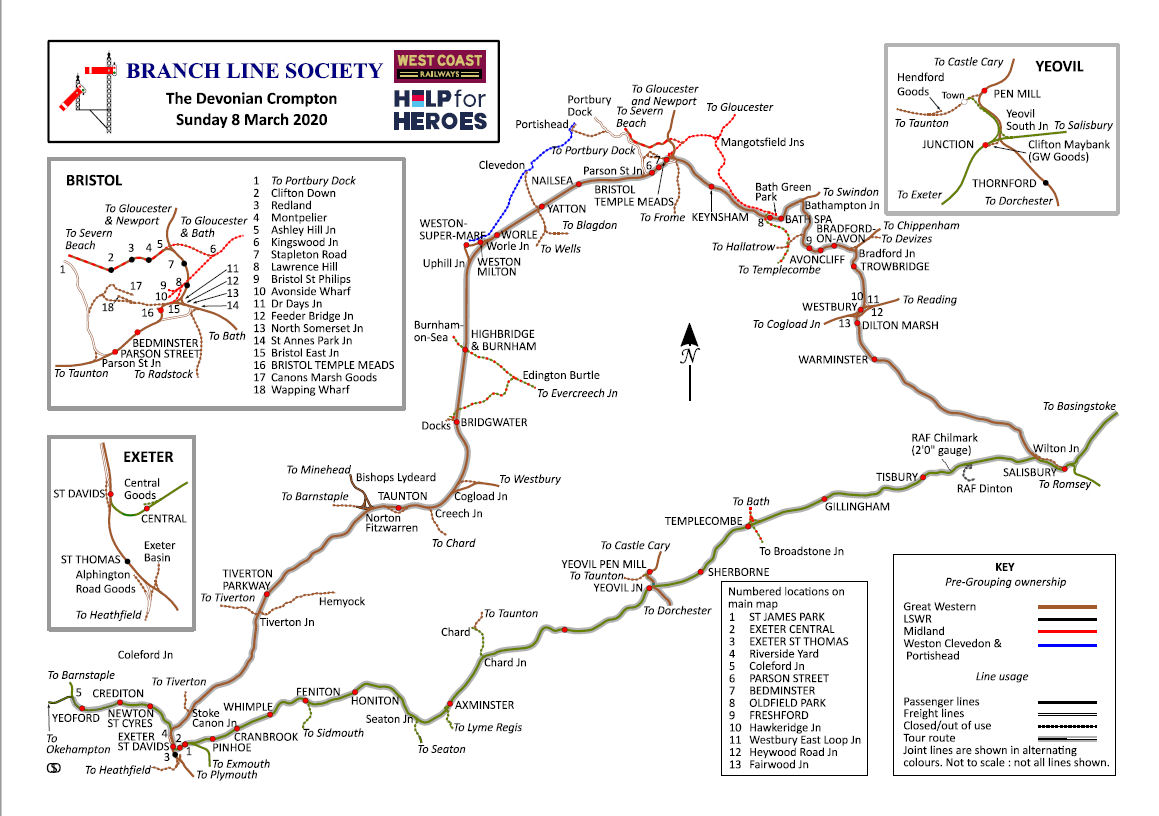 Meanwhile in First Class, complimentary coffee and a bacon roll were served by the lovely Holly and Kerrie. On to the Slow line at Wimbledon West Jn a series of moves was made between Slow and Fast to Worting Jn. For the record, Slow to Hampton Court Jn via Surbiton P4, then Fast and back to Slow via Weybridge P3 and all the way to Woking P4. We picked up some more participants here and were off again on the Fast, then the Slow again immediately before Brookwood and back to the Fast after Winchfield. More joined at Basingstoke and it was Slow line to Worting Jn.

Off the third rail system we had a fast run down to Salisbury, lively with a rattling bogie at my end of the coach. The second complimentary coffee was welcome. A 30 min break at Salisbury allowed a breath of fresh air and a photo. Away again, unusually at Tisbury it was nonstop through the loop. The weather changed further west from the bright sunshine in suburbia to grey and then heavy showers.

A break at Gillingham was to pass a London service and then it was into Yeovil Junction P3 (the Yeovil Railway Centre side where 'Lord Fisher' was in steam for photographers). Here there was another break while the 33s were split, with one on each end for a while, for a trip down the hill to Yeovil Pen Mill. We had lost a bit of time so the reversal at Pen Mill was brief before returning to Yeovil Junction. There we had to wait for another London service. Meanwhile, lunch of stew and cabbage was served.

The late running was causing me concern, would we do the Chard Jn Loop? On previous occasions I'd tried it, I was thwarted by late running. But the worry was over as the brakes went on and our tour looped, time for the first beer of the day to celebrate. At Axminster the tour took P1 in the Down direction - unusual as due to the point geometry the dynamic loop is usually right hand running. We were due a 30 min wait at Honiton which became a minute and by Exeter St Davids we were on time.

A few left the train for a break. I'm sure I heard Brian Blessed roaring 'keep behind the yellow line' as we were due to go. Time to concentrate where we were going in Riverside Yard, which was the Up Goods and then onto the Barnstaple line for a run to our destination of the former Coleford Jn.

The NR Dartmoor Railway boundary was reached, (183m 79ch) just beyond. I suspect due to the company going into administration we could not go to Okehampton. [The sleeper chained to the line would make this difficult - Ed!] The tour reversed and participants enjoyed a 10 min break at Crediton.

Next was Exeter St Davids, so who had 'broken' there could repair to the train, then back to Riverside Yard. The 33s were reunited at the front for the trek back to London. Our tour left the yard via the other north end connection, requiring a hand operated point to be clipped. Back on the main line, more coffee was served with cake. After climbing Whiteball summit the Devonian Crompton raced through Taunton P4. Just after Highbridge whatever was rattling stopped, it must have fallen off!

The tour was first advertised as via Weston-Super-Mare; we take the best way to see that seaside town, avoiding it! Next, an on the day Adlam Bonus, Yatton Up Loop. It reminds me of a time when I worked in Bristol, a colleague who commuted in from Bridgwater would comment if late: Shunted into the sidings at Yatton again. I'd reply I know lots of people who would pay to be shunted into sidings!

Now in darkness, the Devonian Crompton called at Bristol Temple Meads, where quite a few alighted. On to Bath, we passed through Saltford Tunnel where I remarked to my fellow passengers that my home is on top of it. I also pointed out my football club and birthplace as we passed through Twerton and Oldfield Park. After Bath, we entered Bathampton Up Passenger Loop and were then in Wiltshire.

I bought another beer, switched on my tablet and relaxed. Meanwhile, the stewards continued to work hard; three rubbish collections in five minutes, I do admire their energy. We made two unusual moves at Westbury via P3 and Salisbury via P4. Exciting required moves for those from the North, less so for me from the West Country but showing that you do have to pay close attention on a BLS tour...

Back on the third rail, more passengers were set down at Basingstoke and Woking. We weaved our way back to London Slow line from Worting Jn to Basingstoke P3, Fast to Farnborough, Slow to Weybridge and then Fast to Wimbledon. Back in the Capital, the tour crossed to the Slow at Durnsford Road and then, after Vauxhall P7, did almost the whole length of International Jn ladder to end up in Waterloo P17. The second day was over for the dedicated devotees of Devonian Crompton. 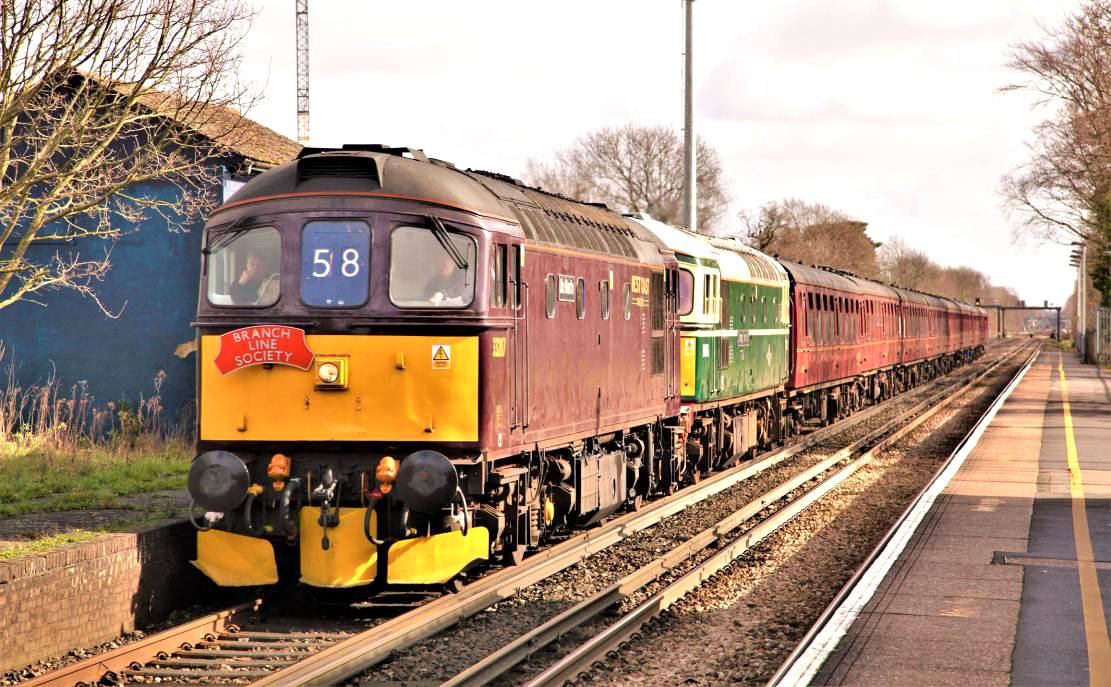 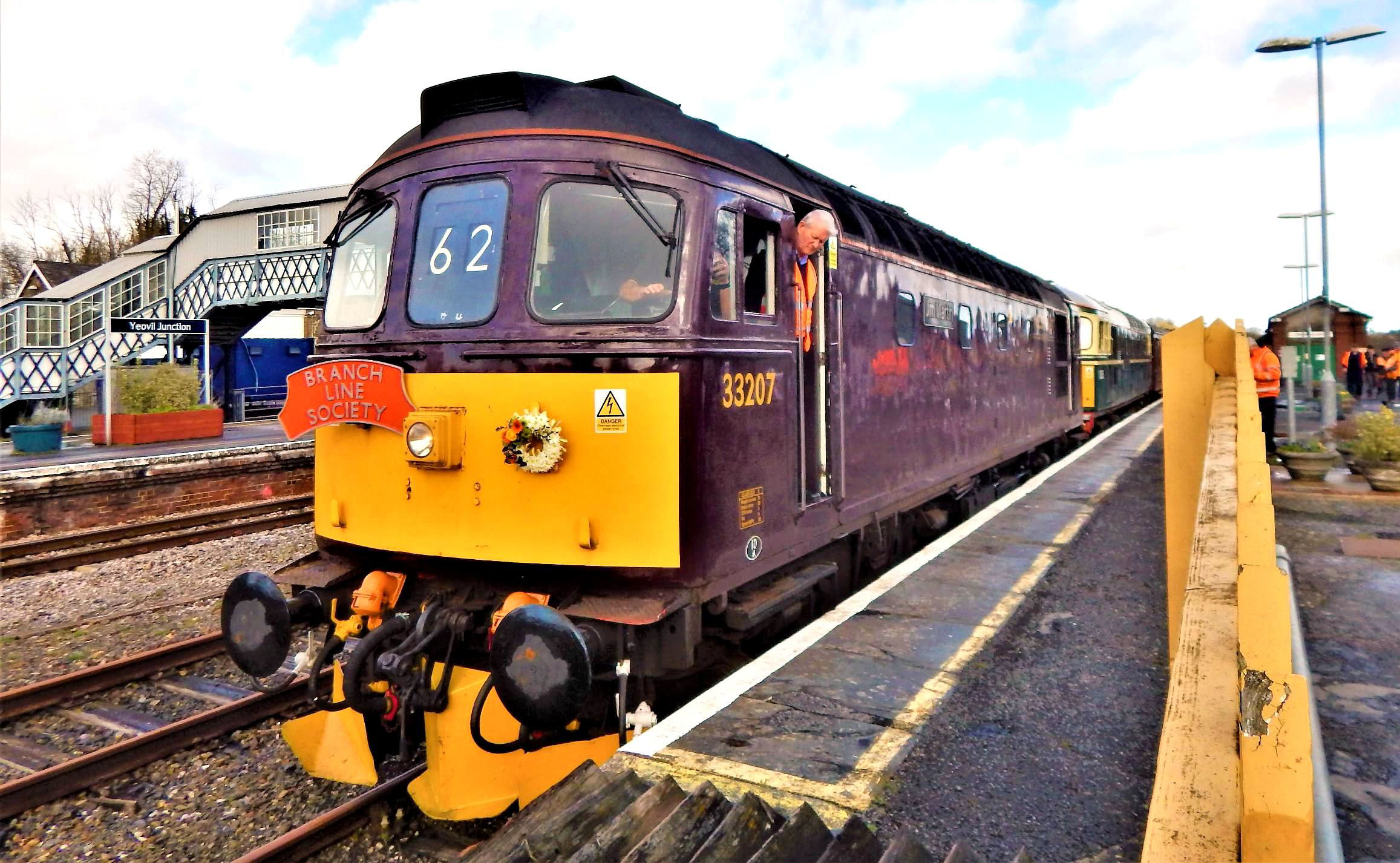 At the country end of Yeovil Junction P3; Yeovil Railway Centre is on the right and the main station is left.
[© Richard Putley 2020] 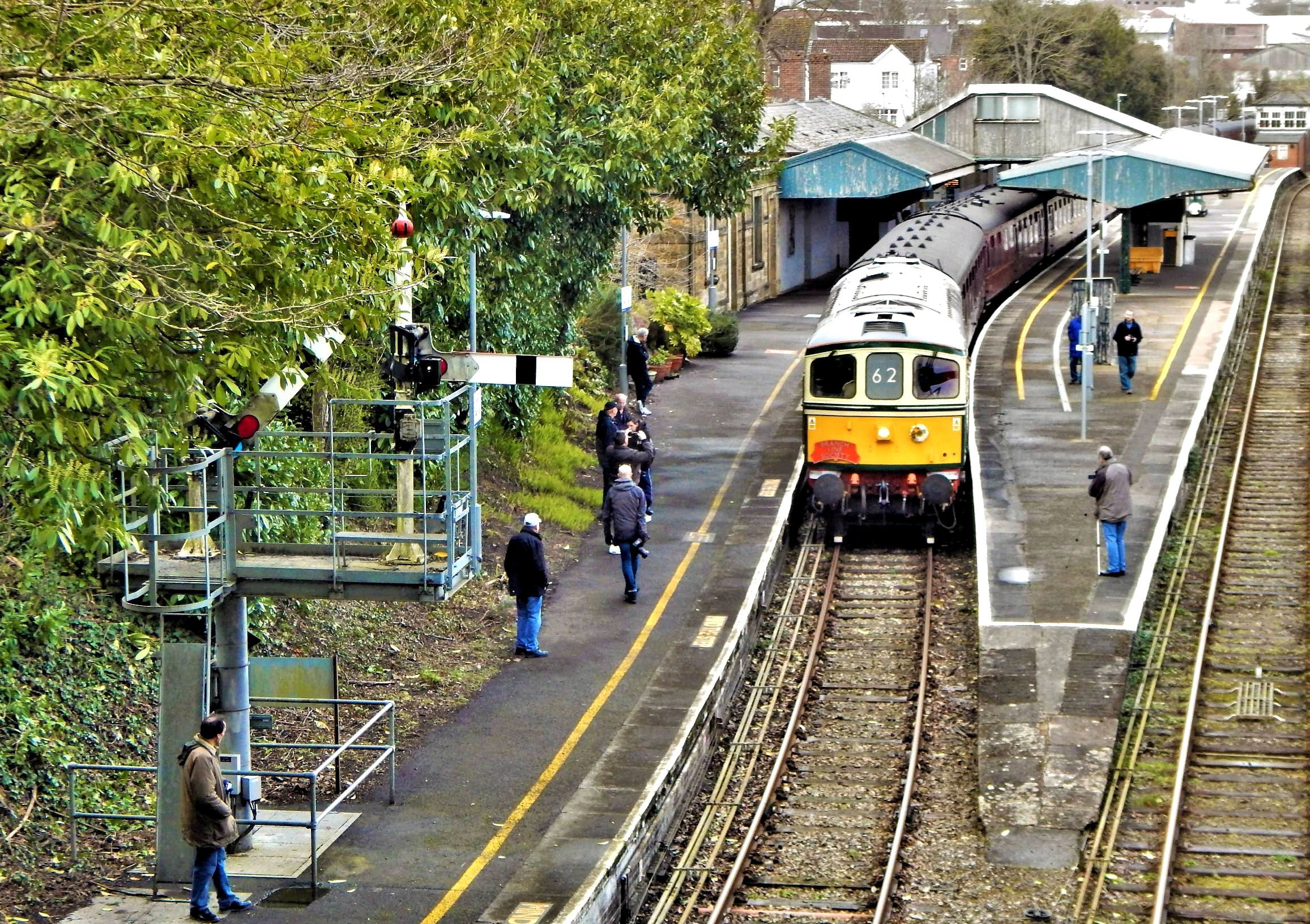 Our nimble photographer then nipped over to Yeovil Pen Mill in time to see the tour reversing there.
[© Richard Putley 2020] 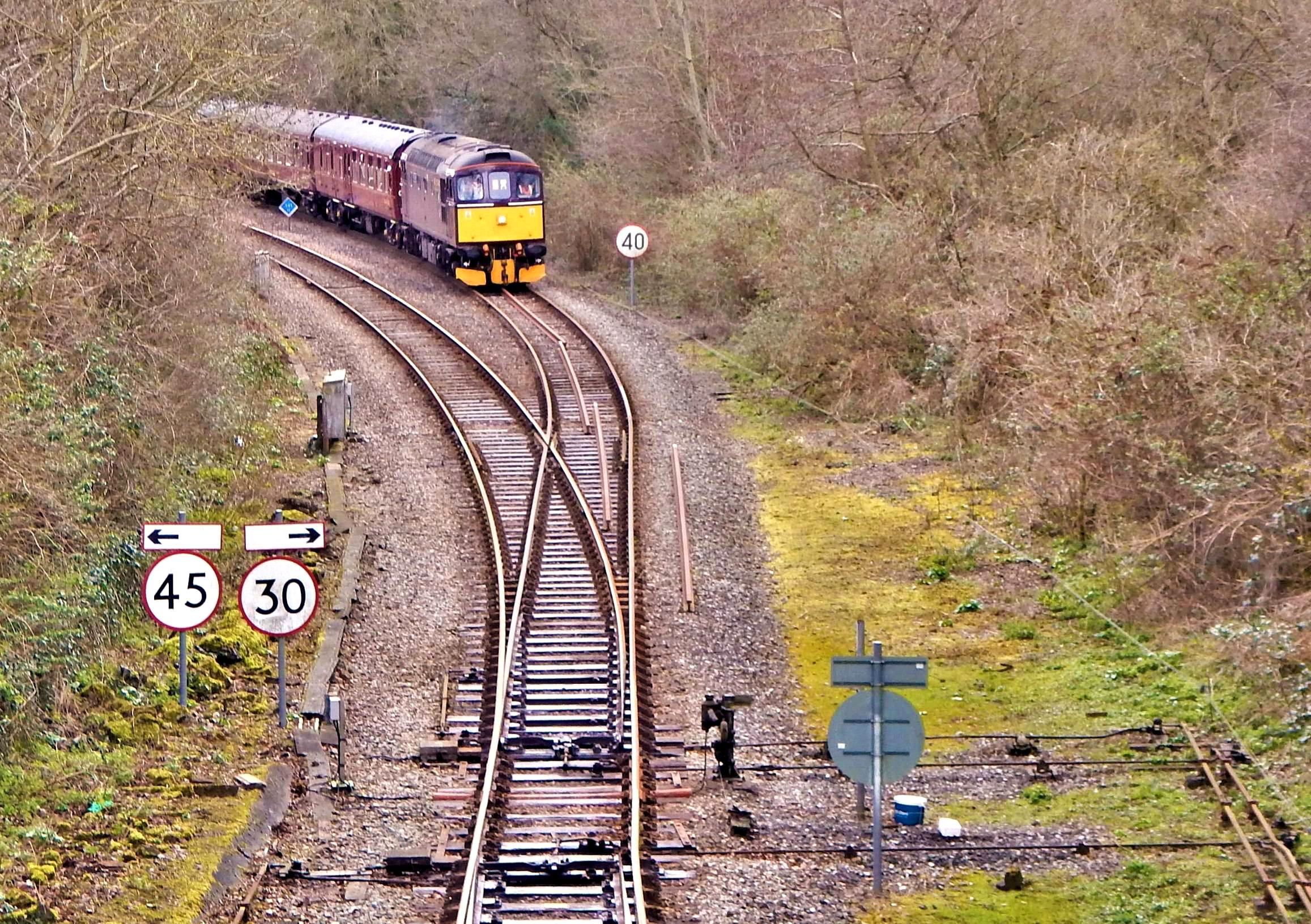 The rear of the tour climbing the bank from Yeovil Pen Mill to run through Yeovil Junction P1 on the way to Exeter and Coleford.
[© Richard Putley 2020] 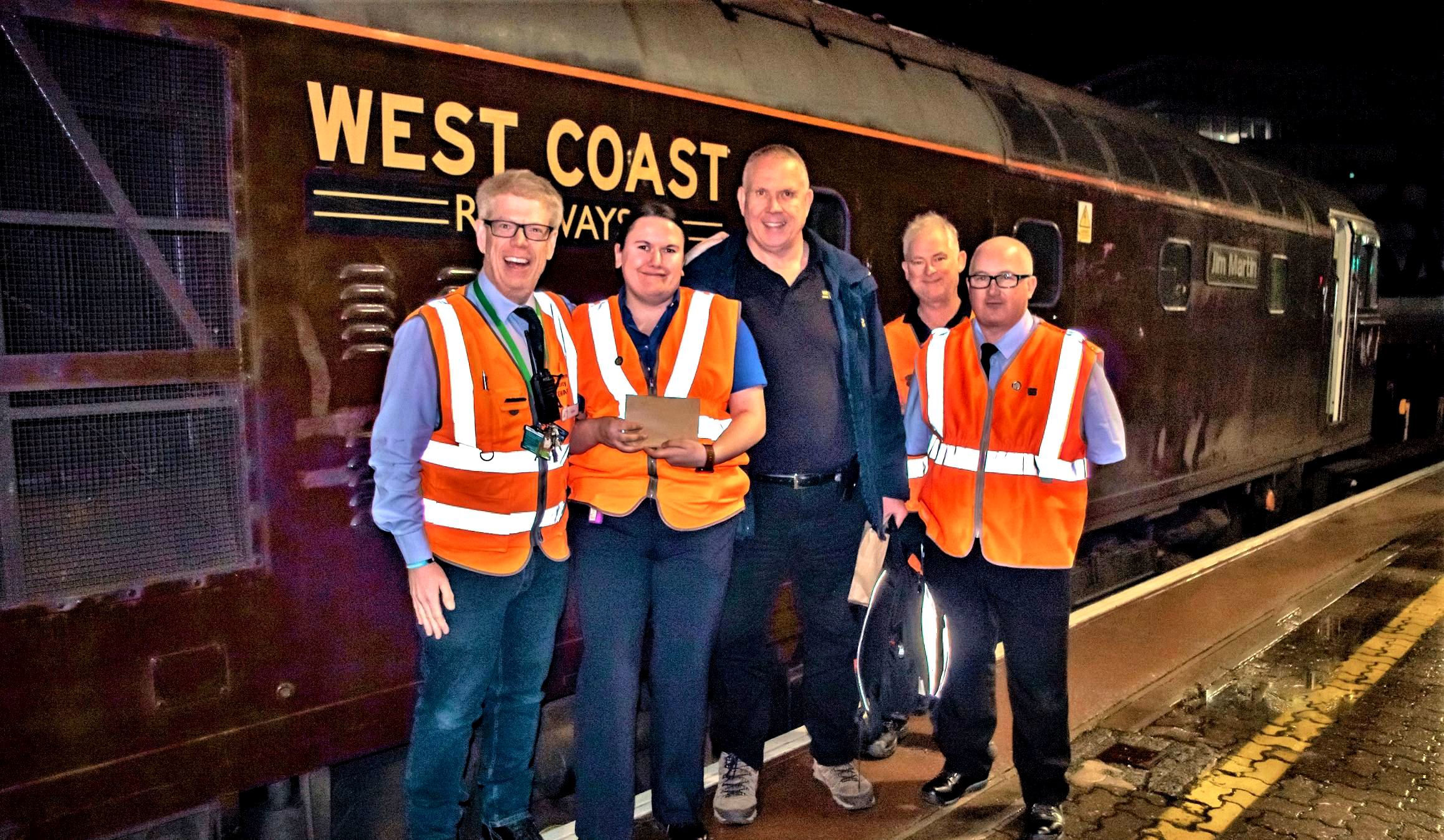 West Coast Driver Bill Monteith is fund-raising for the charity Tommy's, a cause close to his heart, and had asked if our participants would sponsor him on a charity run. £500.33 was raised from our generous tour participants much to the great delight of Bill, seen here in the centre being presented with the cash during a brief stop at Bristol Temple Meads P9 in the evening for a crew change on the way back to London.
[© Geoff Plumb 2020]