Report by Dean A Jones

The sold-out party of 26 started to gather in advance of the very civilized 13.00 start, outside the closed gates of the Ashton Packet Boat Company yard. This is alongside a rather rough, wet and very muddy (slippery) Hanover Street North in Ashton-under-Lyne, a short walk from Guide Bridge station (BLN 1345.412 with map). Some even arrived in style via the Fallowfield Loop (BLN 1345.473). Fair to say that most, if not all, of those taking part were intrigued as to what the day would bring from this little-known PRIVATE site! A tantalising glimpse of what was to come was a stub end of the 2ft gauge track extending through the gate… 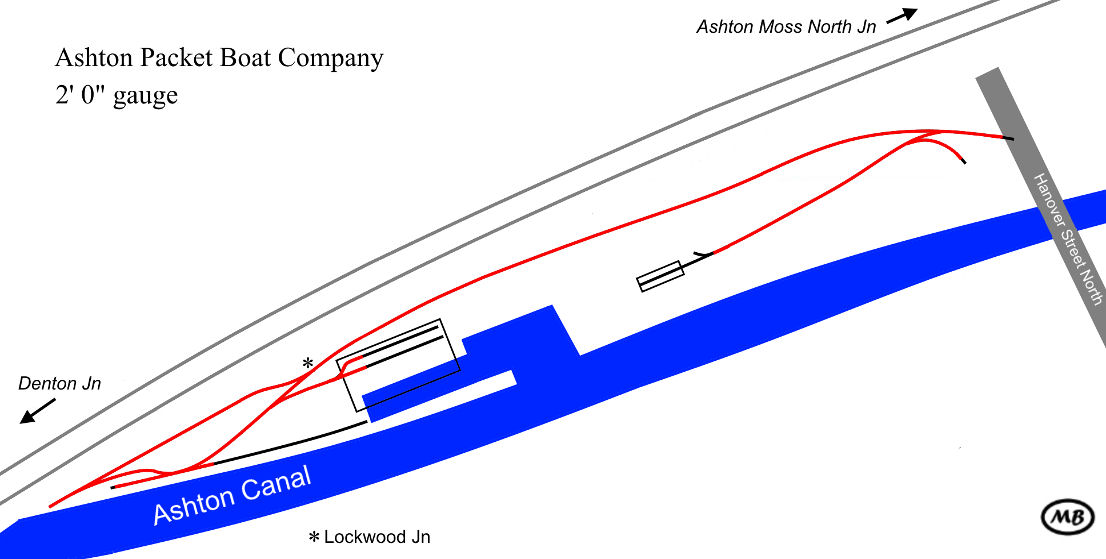 The yard is sandwiched between the north bank of the Ashton Canal, opened 1792 to primarily serve the coal industry, and the non-passenger Oldham, Ashton & Guide Bridge line between Ashton Moss North Jn and Denton Jn. This London & North Western line opened 1862, between Denton Jn and Crowthorn Jn (not a junction after 16 May 1983 but still a change of mileage; now 'Crowthorne') 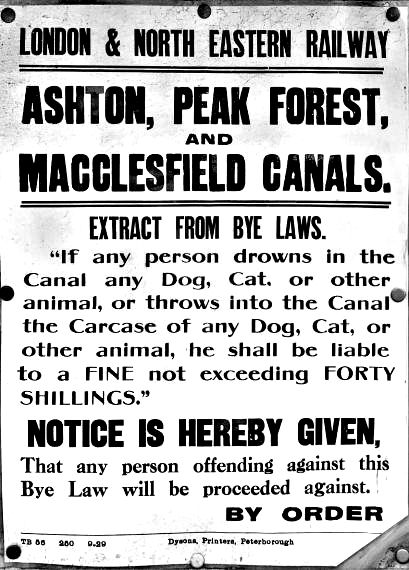 The boatyard is on land that was, at least in part, used for the loading of coal into barges for onward transportation from the nearby Ashton (or New) Moss Colliery, also known locally as Snipe Colliery. It produced coal from 1875 to 1959 and all activity ceased in 1964. What is believed to have been a standard gauge siding existed from the colliery, parallel and on the west side of Hanover Street North, (see map BLN 1345.412) crossing above the canal on some form of timber bridge structure. This siding was therefore at a higher level than the canal so there was presumably some form of hopper/chute gantry arrangement to load the barges. A substantial brick bridge abutment is still in place on the south side of the canal along with a concrete base on the north side which it is believed was part of the support for the railway above. It is not known over what period this arrangement was in use.

With everyone assembled, the gates were opened just as maroon liveried loco RH 200761 (of 1941) arrived on cue. This was followed 'up the bank' by green liveried loco HE 6012 (of 1960) propelling a wonderful and specially constructed (on a wagon frame) coach for our visit, to be used for most of the passenger carrying runs during the day. These two locomotives were to be the primary motive power for the afternoon, changing over at times, both with and without the coach but more of that later!

A short introduction and safety briefing took place after which Bill Holmes gave a brief history of the site, brought into the current use in 1975. The primary function of the yard is the maintenance and restoration of canal boats but there are also a few moorings in use.

An extensive 2ft gauge railway exists, the purpose of our visit, nominally for moving materials around as required. However, it quickly became apparent that in addition to this very practical purpose, many of the volunteers working in the yard are very much railway enthusiasts, emphasized by a sprinkling of railwayana to be found! As the passenger coach had a, very cosy, seating capacity of only four, the rest of us were encouraged to explore the interesting site on foot while the first railtour runs commenced.

The railway network here comprises a 'main line' extending from the gate at the north east end of the site dropping down to a point at the south west end where the Ashton North Jn - Denton Jn line crosses over the Ashton Canal. This main line has branch lines and sidings extending into various parts of the site.

At the eastern end, at a higher level than most of the site, a branch with headshunt serves a working and storage area with containers dotted around. On it was recently arrived (believed from the private Caernarfonshire Slate Railway at Porthmadog) and 'on-charge' best described as rust liveried loco WR 10114 (rebuilt 1984 from WR M7556 of 1972). At the end of this branch was stored blue liveried loco FH 2325 (of 1941). In a container, not rail connected, was loco JF 18892 (of 1931) dismantled.

At the lower end of the site there is a canal side branch (with headshunt) along with sidings into a depot/workshop building. Amongst other rolling stock the canal side branch also held locos HE 2820 (of 1943), green liveried and partially dismantled for repair sitting on a wagon frame, and a partially dismantled and stored WR 7967 (of 1978) again best described as a rust livery!

Among the boats being worked on was a large narrowboat 'JOEL No9', which had been removed from the canal with the aid of three inclined rail mounted bolster wagons (no, we didn't do these tracks). Two Ruston - Bucyrus tracked cranes are on site, 10RB & 22RB, used for lifting materials as required.

Tantalisingly there was also a connecting 'through' line from an east end 'Lockwood Jn' on the main line close to the workshops at intriguingly named Lockwood 'station' and towards a further junction at the west end, at the canal and end of the line. This 'through' line was, frustratingly for the track-bashers, occupied by a wide variety of tippler/lateral wagons, many loaded with all sorts of heavy equipment and components along with recently arrived but non-operational locomotive RH 264252 (of 1952). The latter previously at the premises of Leander Architectural in Dove Holes (near Buxton). So, unfortunately it would not be possible to cover the through line by any of the railtour runs unless…

Track coverage runs took place over the main line using the passenger coach while the storage area branch and headshunt were covered by RH 200761 with participants riding on the loco one at a time!

Eager for more, there was a desire by some to cover at least part of the track into the workshop area so as much of the accumulated items as possible were cleared from the track and from a flat wagon which was then deemed suitable as passenger carrying stock for this purpose. In the meantime a now seemingly fully charged WR 10114 arrived and was commandeered to haul the said flat wagon for shunts into and out of the workshop. The loco did sometimes require manual assistance to move over some of the less than even trackwork! Meanwhile welcome hot drinks and biscuits were available.

During the workshop shunts much effort was taking place, both manual and with the aid of HE 6012, to clear the through line of all the stored rolling stock and accumulated material. Successfully achieved and a great achievement by all concerned, runs commenced along the 'Lockwood through' using RH 200761 and the passenger coach. It became clear that on the return runs the passenger coach would need to be manually pushed to one side to avoid hitting the Lockwood station roof!

Towards the end of a highly successful and enjoyable three hour visit, and after some participants had left, a few hardy souls were treated to a triple header (RH 200761 + HE 6012 + WR 10114) using the passenger coach to the very end of the line through the gate.

The visit finally ended as booked at around 16.00 and the gates were firmly closed to allow the yard to return to normal operations again.

It was great to have a genuine industrial railway fixture again, of the type that was so common in the 1970s and 1980s. Pleasingly, as a result of our visit, £250 was raised for Francis House Children's Hospice. I'm sure that all participants would offer their appreciation to all involved in organizing and operating the railway on a Saturday at this extremely interesting and unusual site. Particular thanks to Adam Rickett, his enthusiastic volunteers and our indefatigable Kev Adlam. The following railway locos were on site at the time of our visit, those marked* were operable and used on the railtour trains: 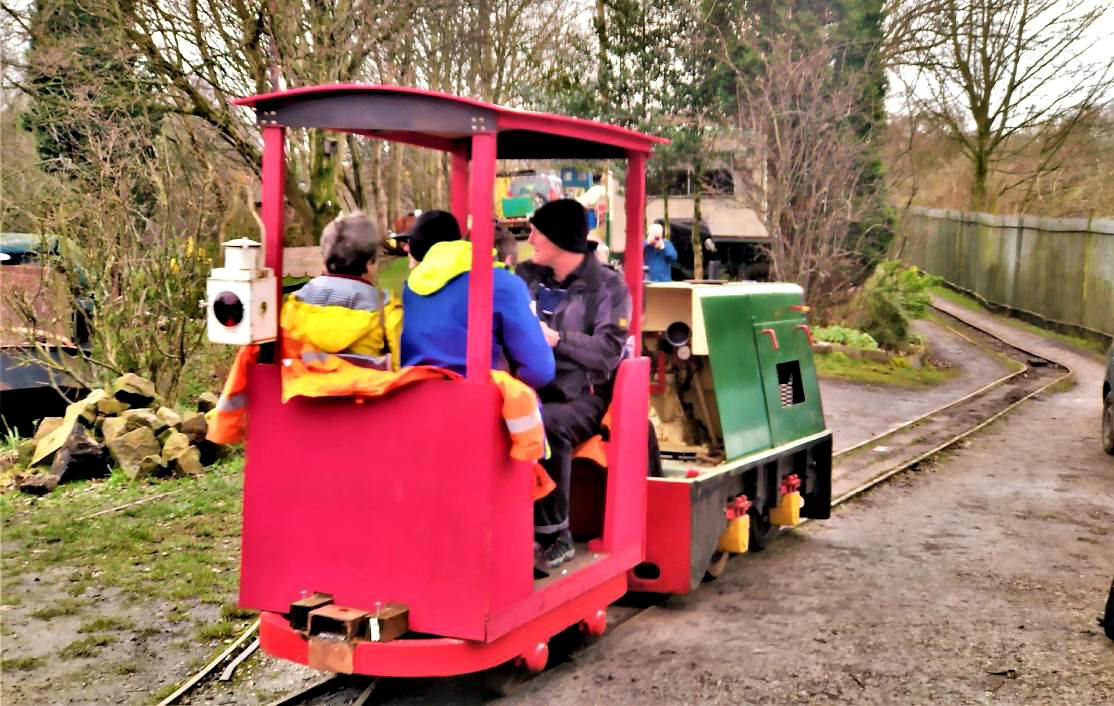 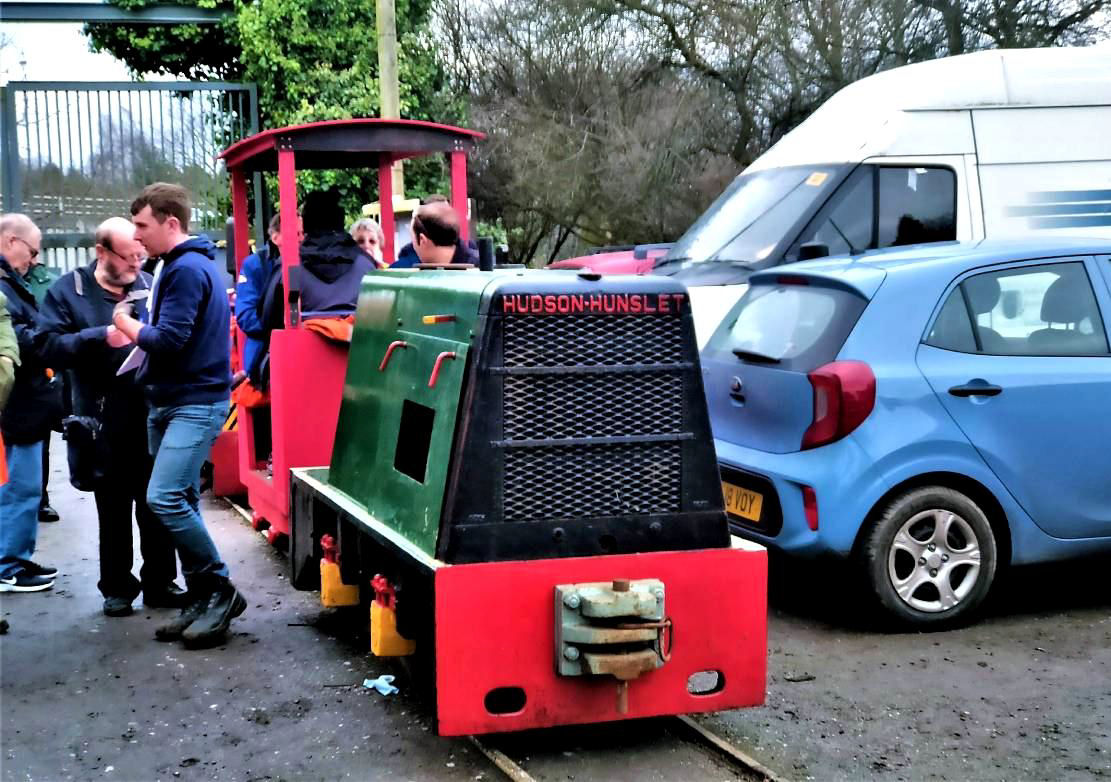 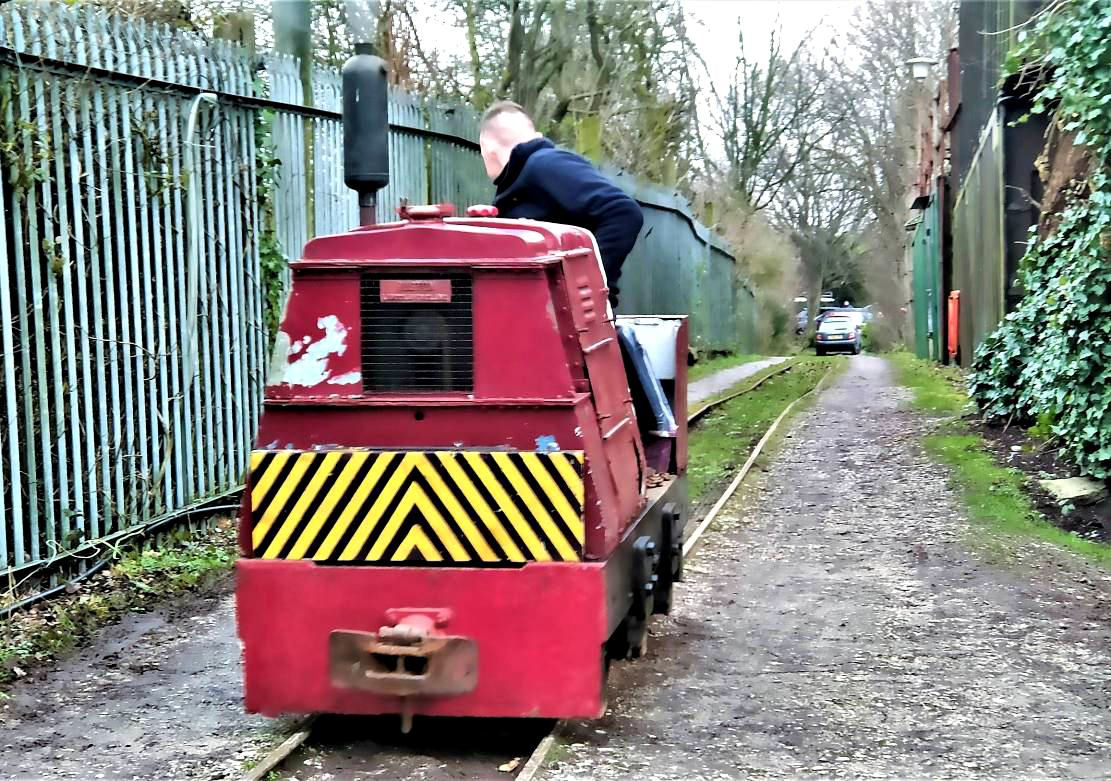 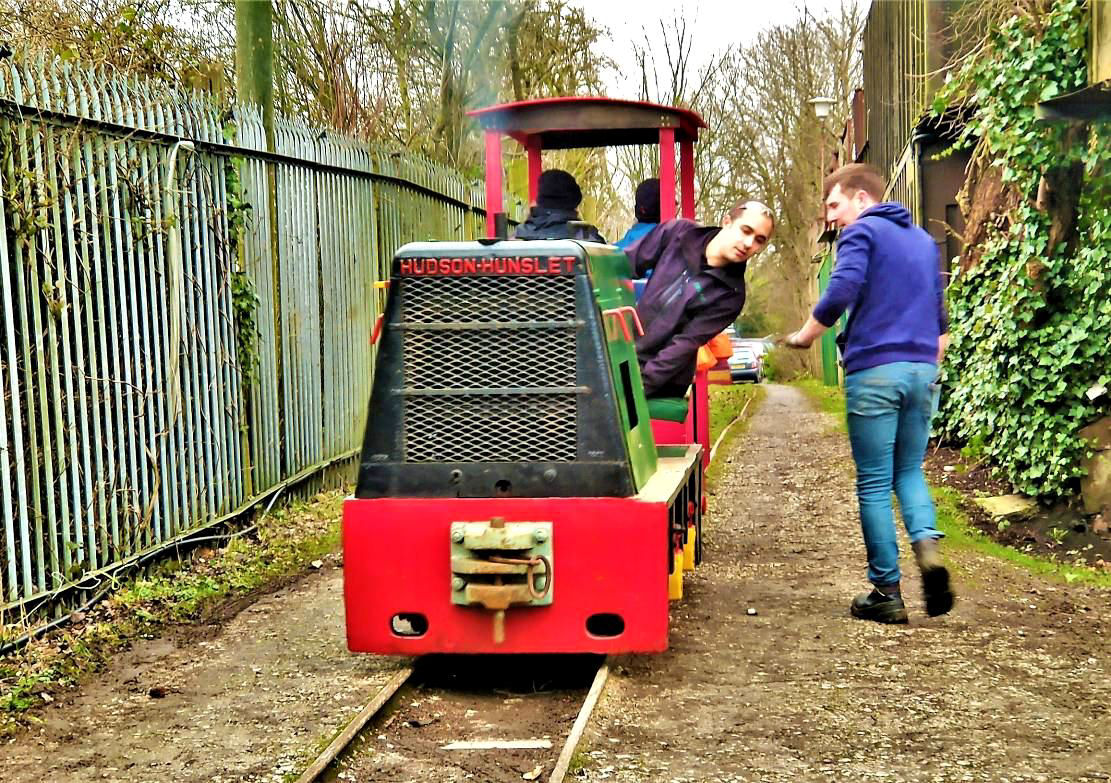 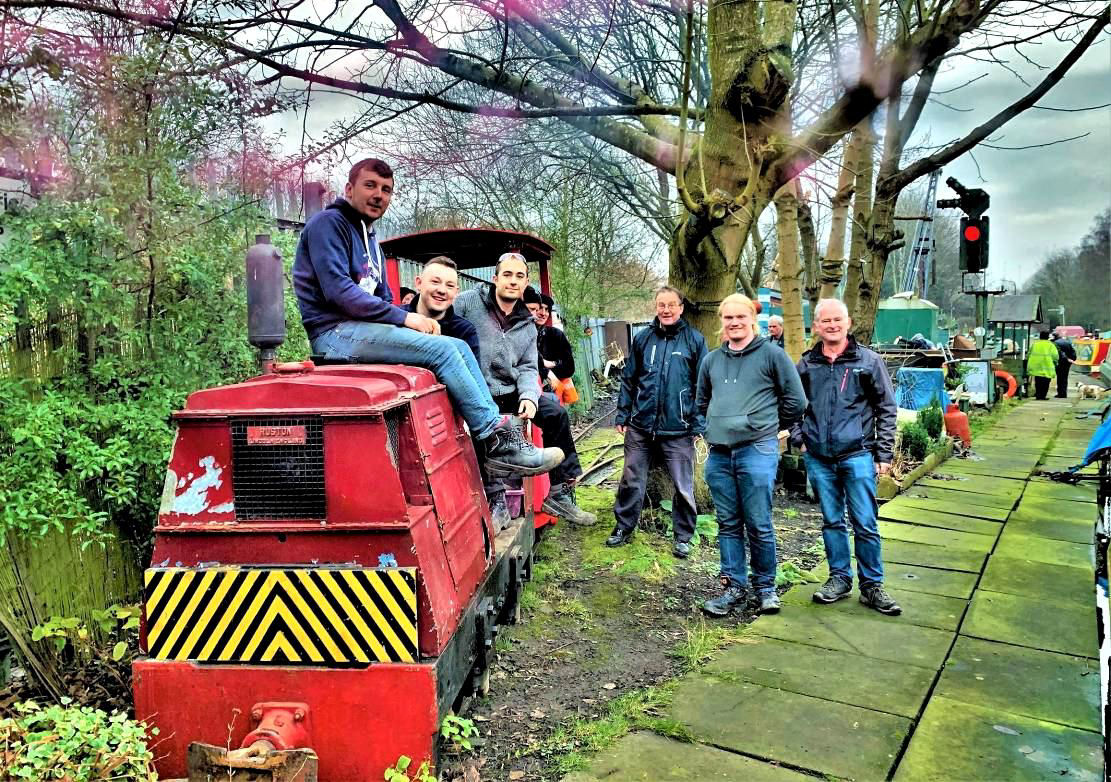 By the canal where the bottom end of the line is at a much lower level than the entrance end.
[© Kev Adlam 2020] 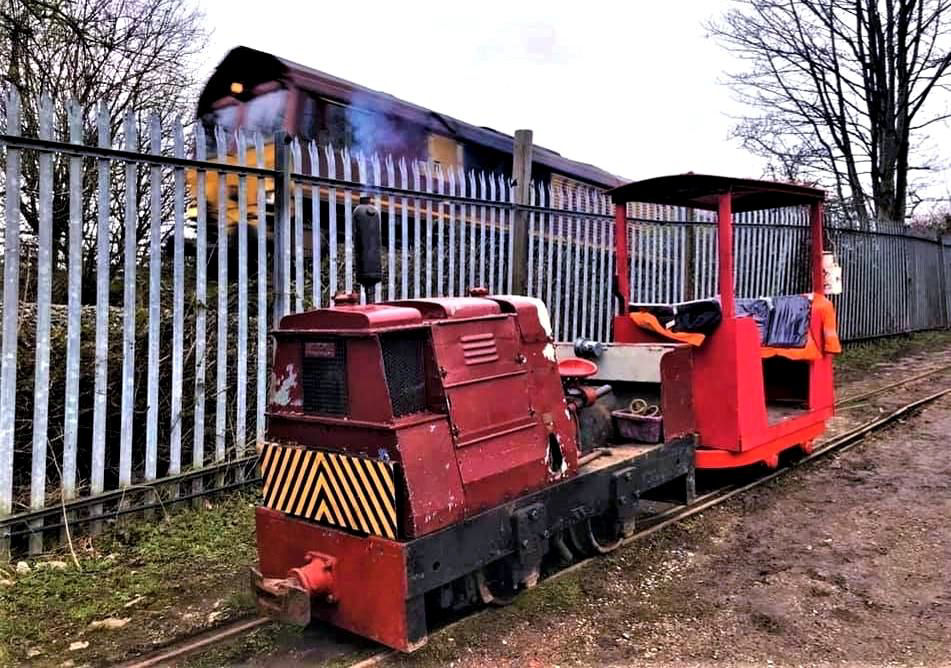 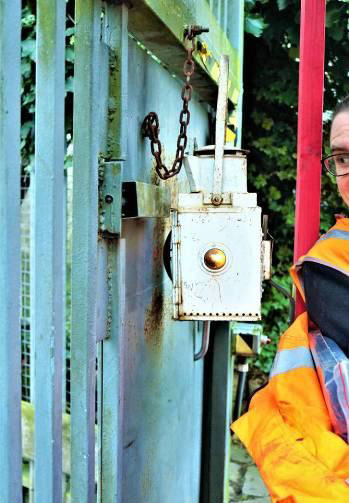 The tail lamp at the entrance gate (some trips did reach the very end of rail outside).
[© Geoff Noakes. 2020] 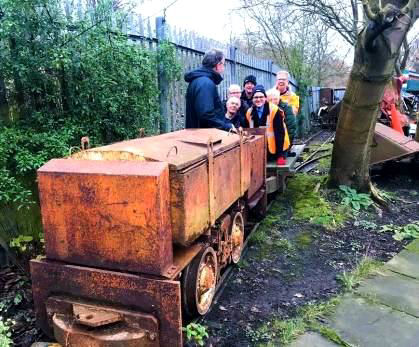