The Fallowfield Loop is billed as Britain's longest urban cycleway, running for nearly 8 miles through South Manchester suburbs. The path was developed by Sustrans, part of Route 60, following the closure of the once double track railway in 1988. It was walked by nine members on the morning of Sat 25 Jan, organised and led by John Cameron, our North West Editor.

We started at St Werburgh's Road Metrolink stop at 09.30; most arriving by tram which, of course, partly runs on the trackbed of the former Midland Railway main line from Manchester Central to London St Pancras via Peak Forest (this section was actually joint with the Cheshire Lines Committee). We soon made good progress along the tarmacked route in cloudy but dry weather. St Werburgh's Road is at the former Chorlton Jn where the Manchester, Sheffield & Lincoln (later Great Central) Railway's Fallowfield loop began. Although the route is surfaced, there are many reminders of railway history, including numerous bridges of a similar style and two extant (of four) station buildings. The bridges are generally smart, nicely painted in black or green and some have been sympathetically strengthened beneath sections of roads due to the (literally) heavier road traffic. The first extant station at Fallowfield was originally in open countryside. Although it is now a Sainsburys café, the building's heritage is clear with the title 'Fallowfield Station' still clearly visible in the stonework.

One-inch to the mile 1961 map. Bottom left is Chorlton-cum-Hardy station (shown open to passengers) and Chorlton Jn. The Fallowfield Loop runs along the bottom before turning northeast to Fairfield (with the curve left round to Gorton and central Manchester). Guide Bridge station is top right with Ashton Moss Colliery (known locally as New Moss or Snipe Colliery) nearby.

Beyond Sainsburys car park (once extensive goods sidings) the railway route was rejoined, the sunken character of the first half in deep cuttings gradually giving way to level ground with better views and finally an embankment towards the end of the walk. We continued east passing beneath the Styal line then under the Stockport to Manchester line (its overbridge had clearly been widened) to arrive at the second intact station at Levenshulme (South). Current renovation of the building there as a cycle hire and repair hub ('Station South') with a café meant that it was difficult to examine closely but, as at Fallowfield, the station name on the concrete lintel over the original entrance door was discovered.

A deviation was made to see an access building to the 96 miles Thirlmere Aqueduct - the longest gravity fed aqueduct in the UK dropping by about 20" per mile. Built between 1890 and 1925 it carries 55M gallons of water per day (11% of the North West supply) from the Lake District at about 4mph, so the water takes about a day to make the journey to the south Manchester reservoirs. Later an exposed pipeline section (the aqueduct is not continuous tunnel) was seen crossing above the Fallowfield Loop.

We then passed the site of Reddish Depot, now totally unrecognisable and covered by a modern housing estate, although the eastern boundary of the former railway was discernible. The walk then crosses above the Manchester to Romiley line before the overbridge high above Hyde Road (the A57). This busy main road narrows down from four lanes to two beneath it for a while causing traffic jams. The walk was timed just right as work began on Mon 3 Feb to widen the road beneath it - the bridge is being removed and replaced with a longer non-railway type one to maintain the cycle and footpath.

At the former Hyde Road Jn (previously Reservoir Jn) one walker branched left along the former curve to Gorton. Here it was apparent that, at the Fairfield and Gorton ends, previous lengthy cuttings had been filled in (with spoil from the 1997-2001 second runway construction at Manchester Airport). Surviving bridge parapets had the appearance of small walls on level ground, with all below them filled in and obscured. The remaining eight continued to Fairfield station, the end of the walk, having taken three hours to complete the route. It was evident that the station once had six platforms, two on the fast lines, two on the slow and two on the Fallowfield Loop line, all once 1500Vdc electrified with complex pointwork. Now there are just the Up and Down Main AC electrified lines, using the original DC supports and OHLE. The base of the demolished station building is evident on the road bridge.

Many thanks to John Cameron for organising and leading a very enjoyable walk, and for providing comprehensive route notes greatly enhancing the experience. 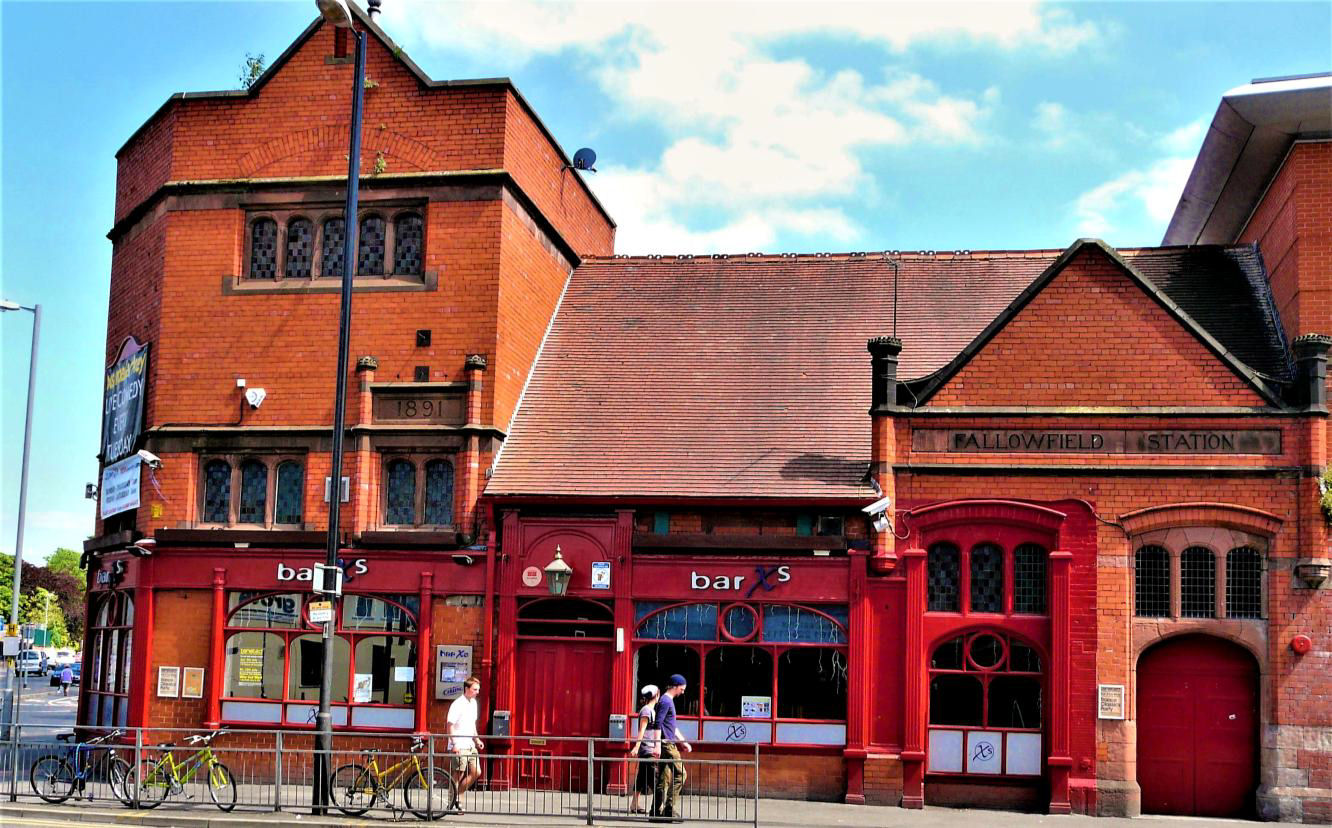 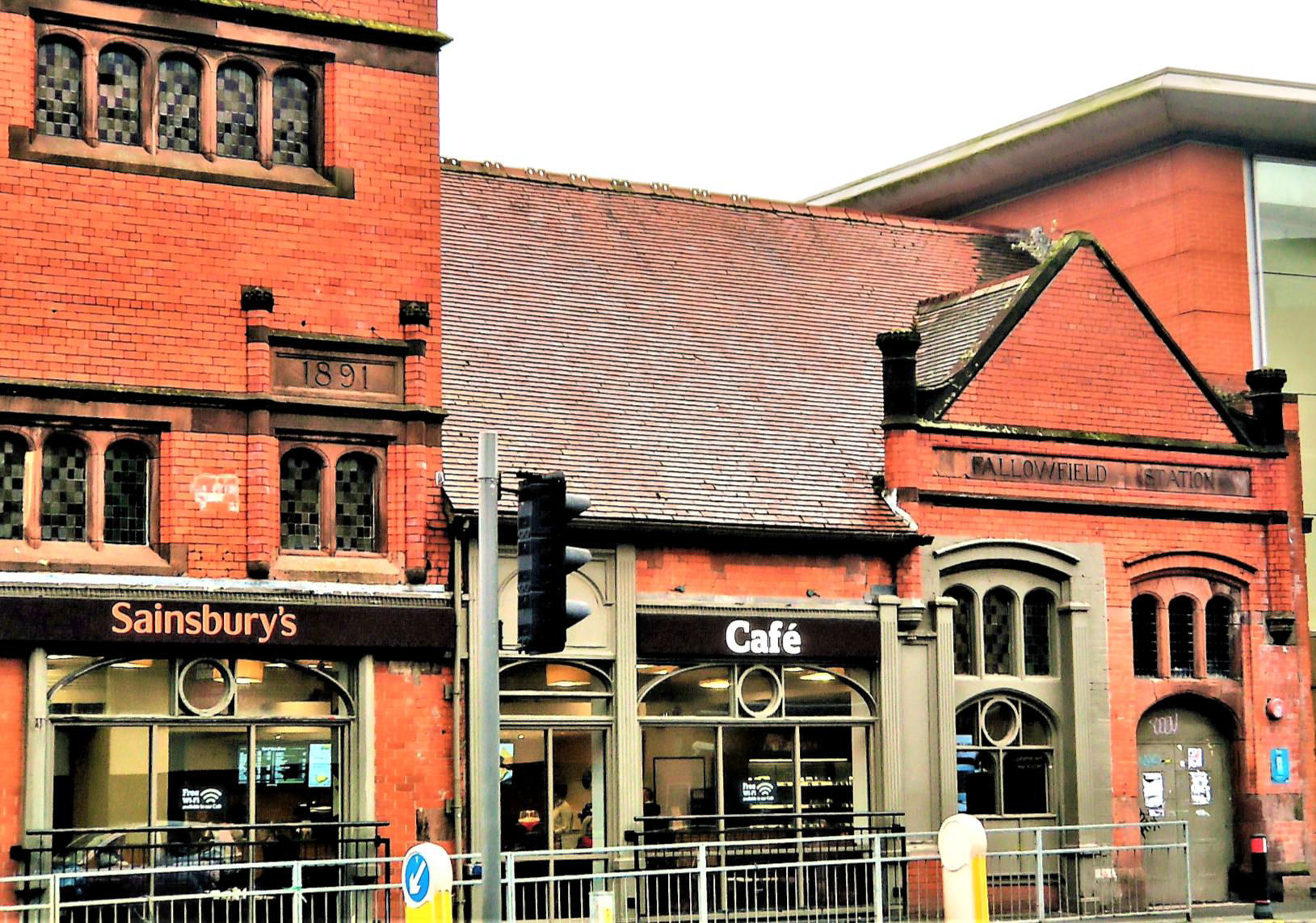 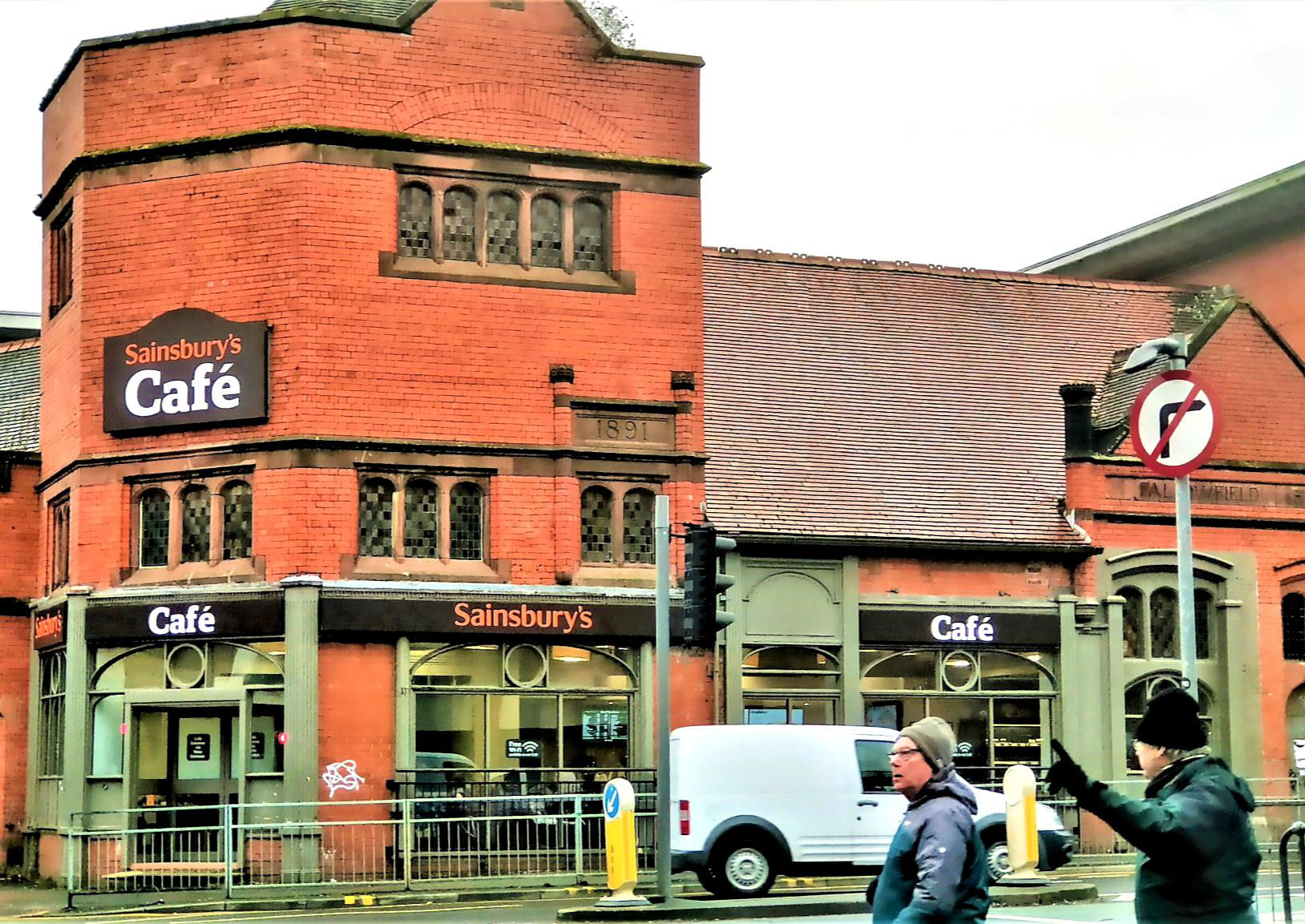 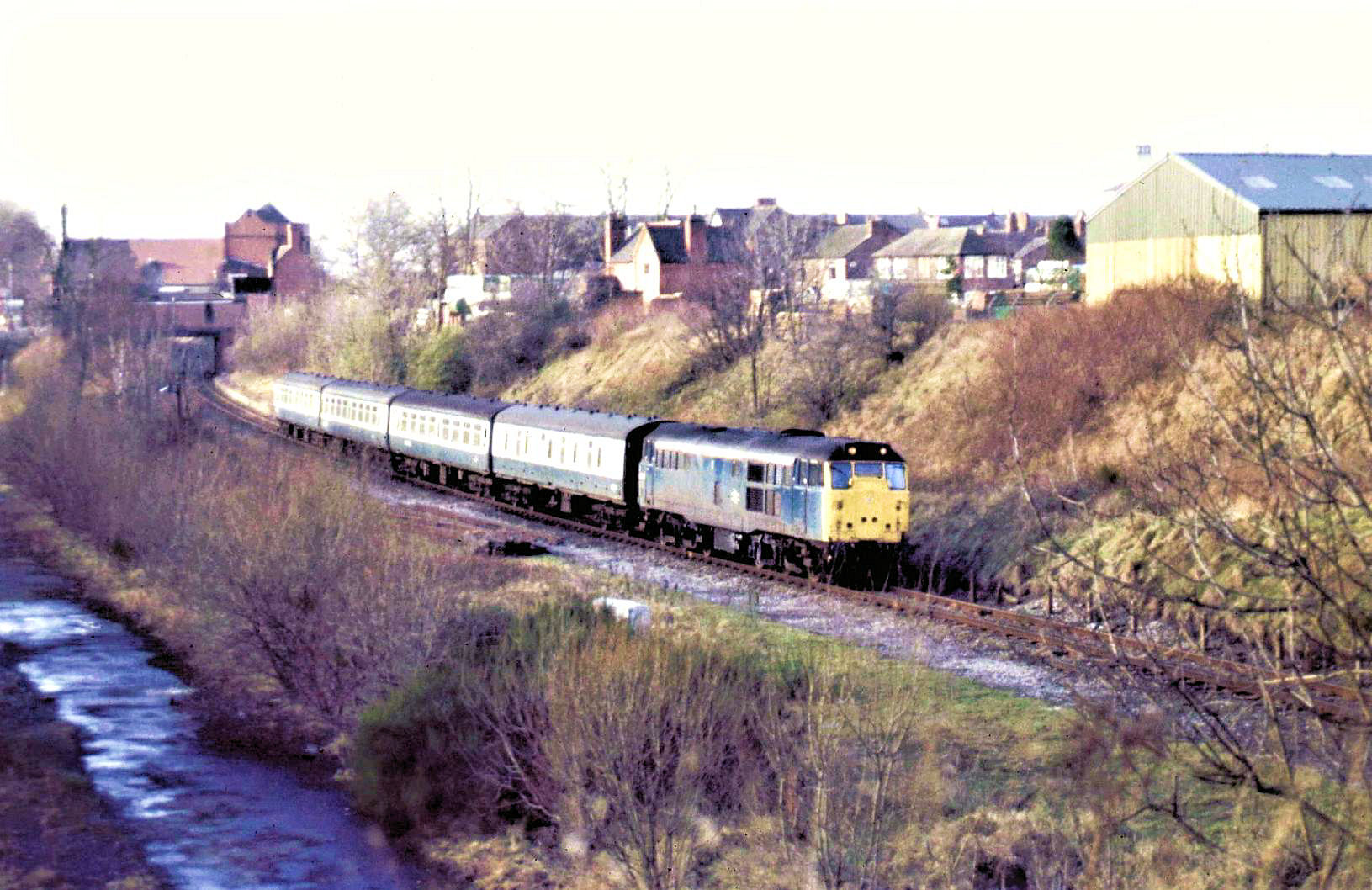 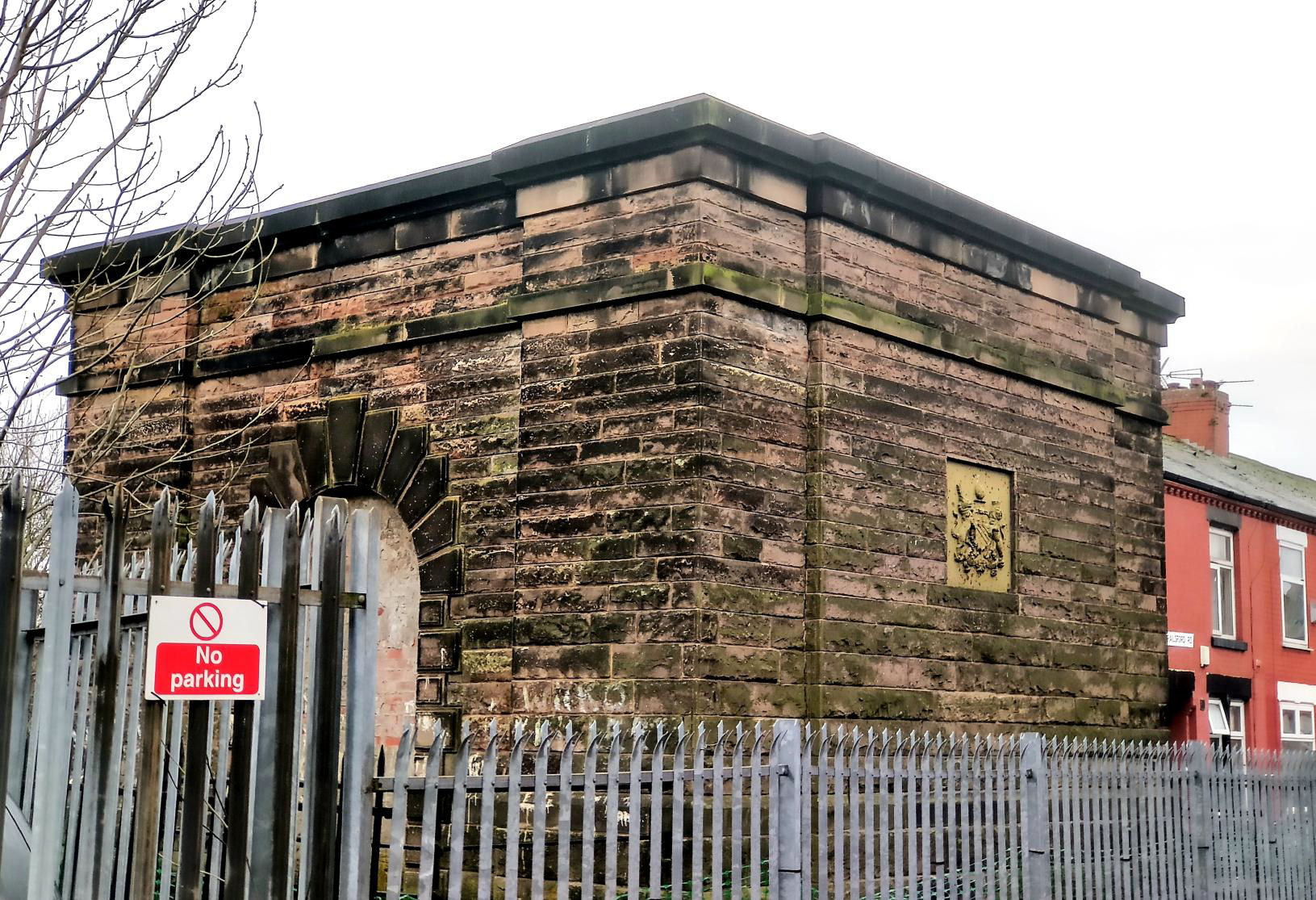 An access building to part of the Thirlmere Aqueduct.
[© John Cameron 2020] 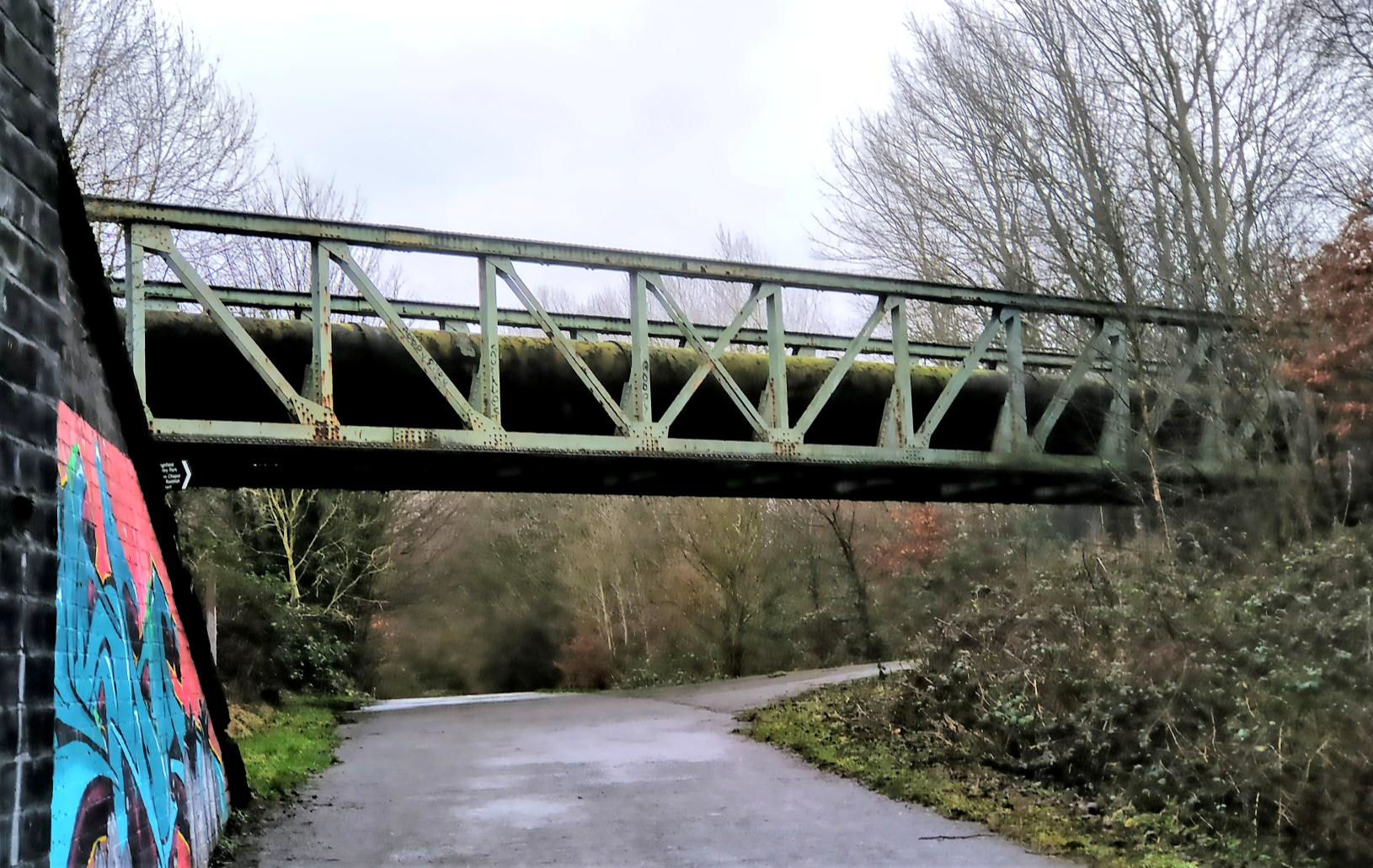 A branch of the Thirlmere Aqueduct crosses over the Fallowfield Loop.
[© John Cameron 2020] 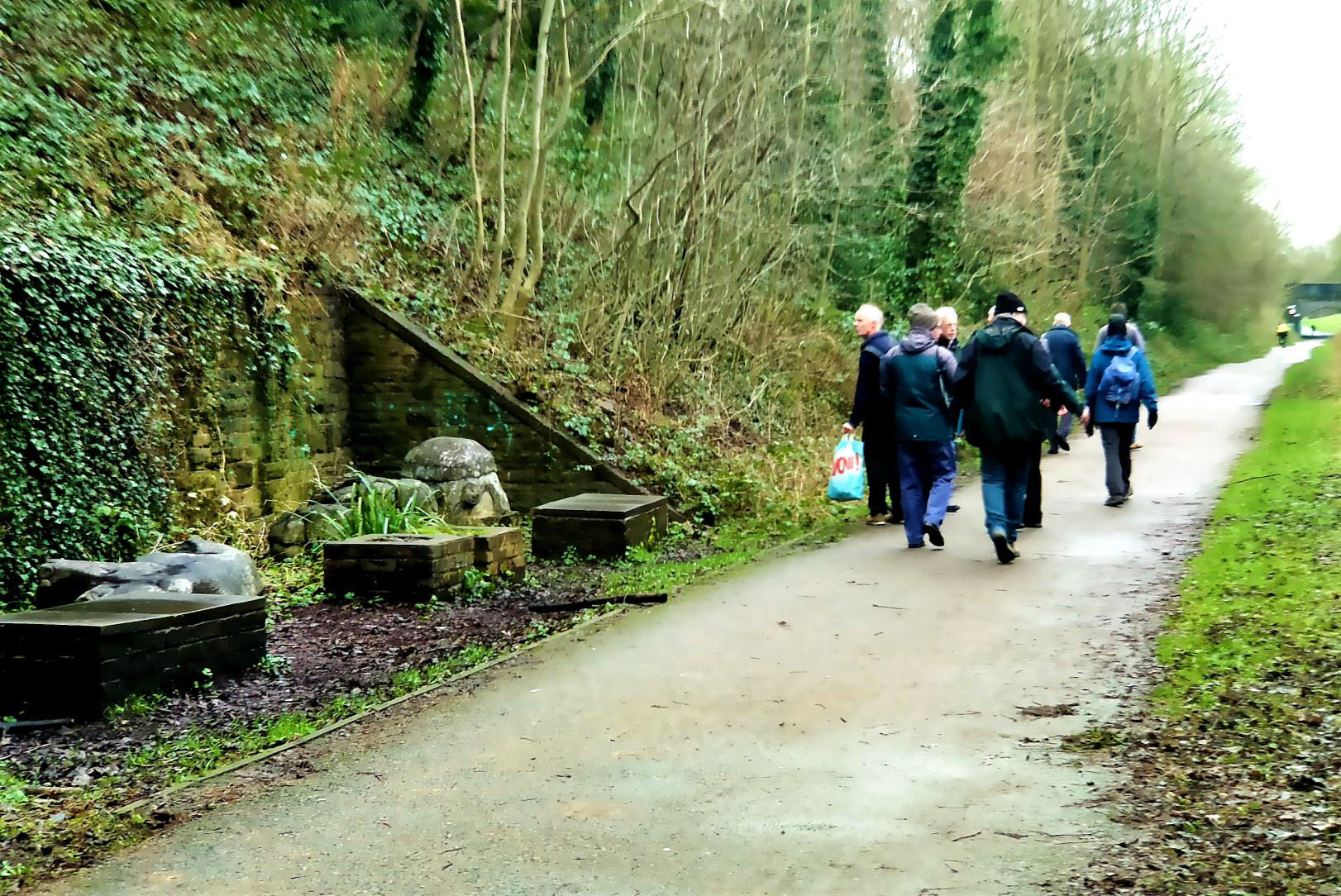 The area on the left (matched by a smaller one off picture, on the right) was thought to be the site of Yew Tree Lane Signal Box (at Yew Tree Lane sidings) opposite to a bothy for shunters.
[© John Cameron 2020] 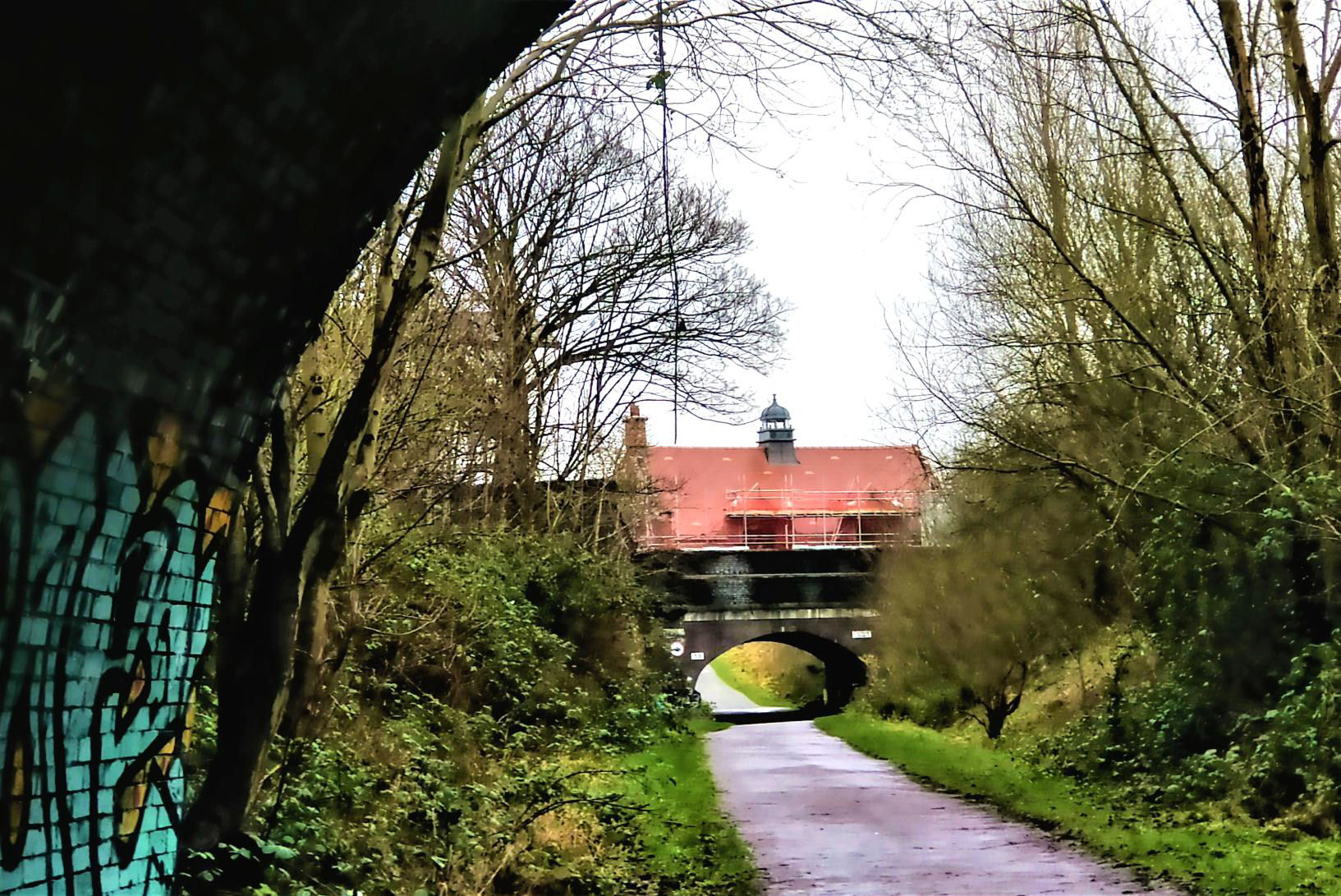 Approaching Levenshulme (South) looking east - the station building on the bridge is being renovated. The original road overbridge is above the white line across, below it the curve is concrete reinforcing for the road (it is not beneath the station building) as on quite a few of the line's bridges. This is why clearance appears reduced although is adequate even for tall cyclists!
[© John Cameron 2020] 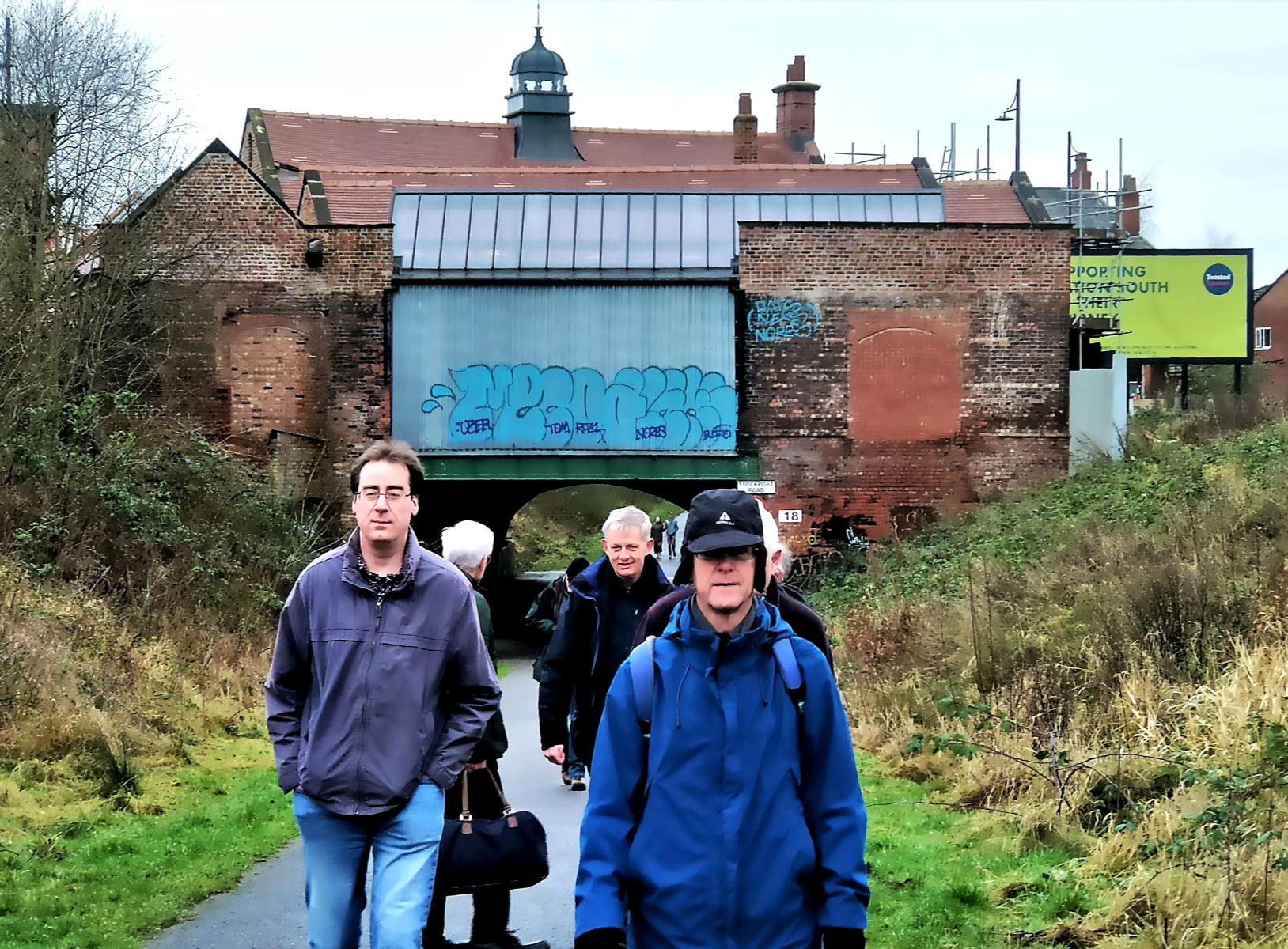 Levenshulme (South) station site looking west towards Fallowfield, the station building has blocked up platform entrances. There was a platform each side here. This end of the overbridge beneath the building is original, without the arched concrete reinforcing.
[© John Cameron 2020] 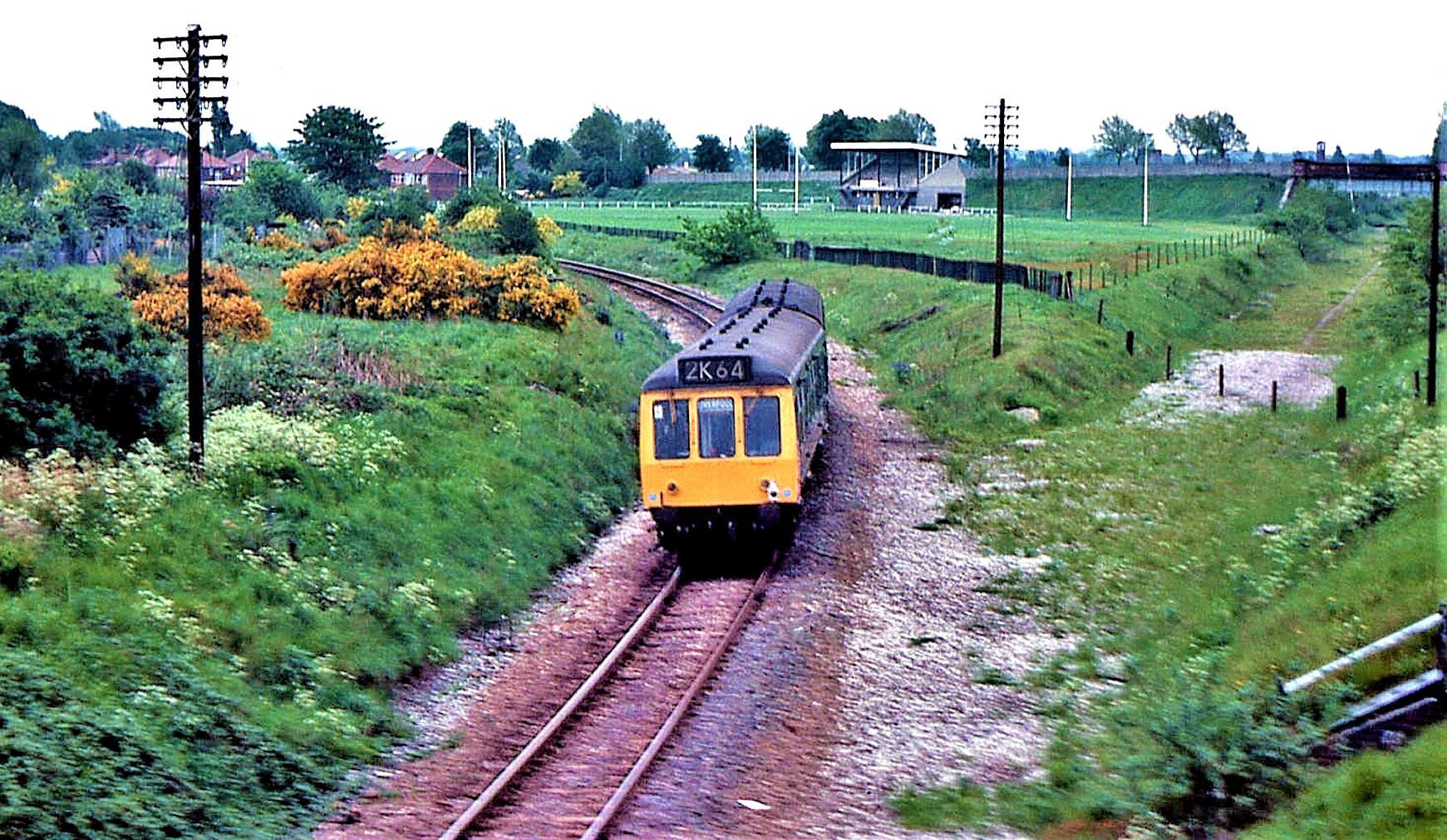 A diverted 2-car DMU takes the Fallowfield Line round to the left at the former Chorlton Jn. Right was the line to (ultimately) London St Pancras via Peak Forest and Matlock, it is now the Metrolink route to East Didsbury and the start of the Airport line! (May 1976.)
[© Ian Mortimer 1976] 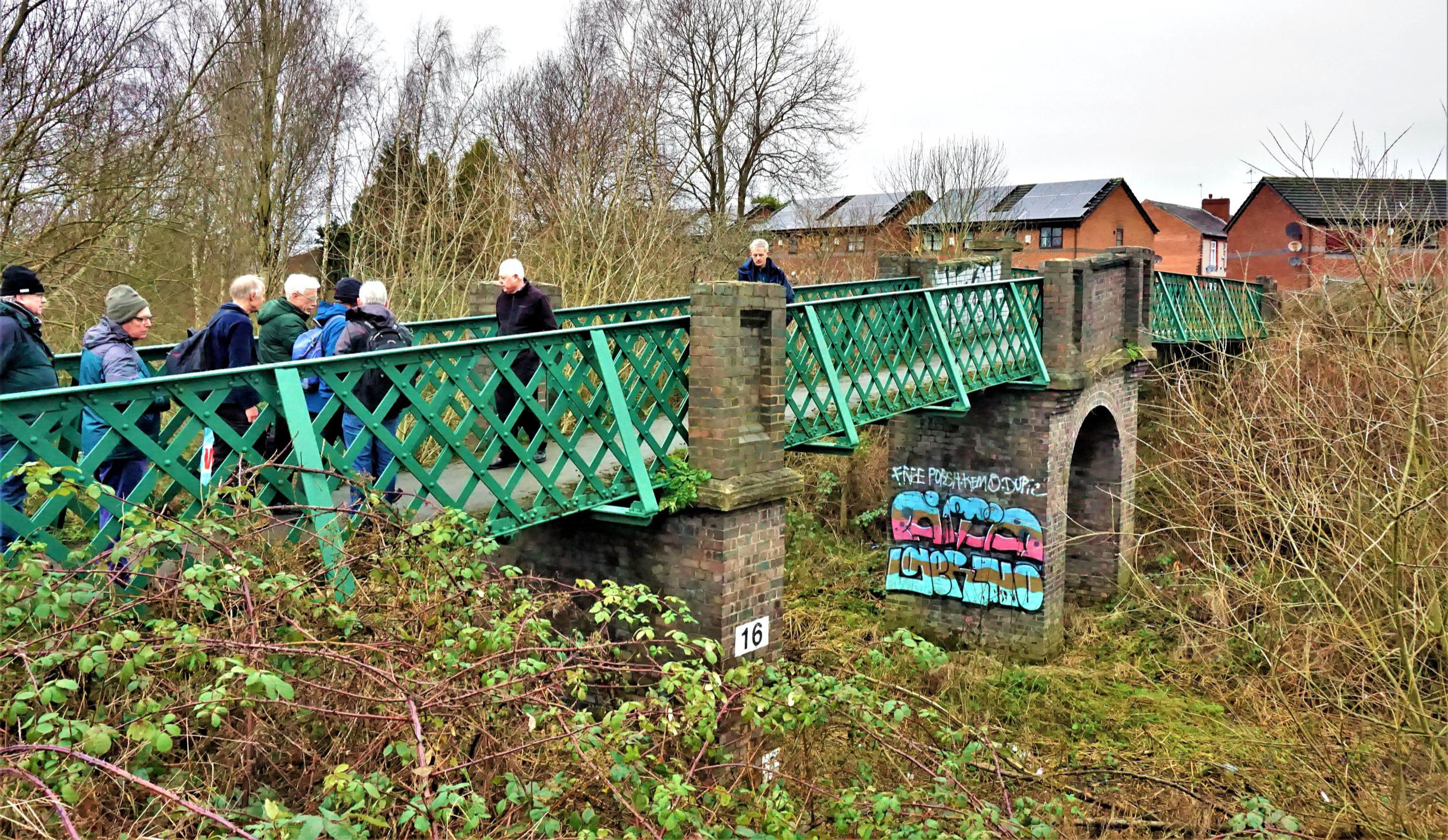 Participants explore the fine asymmetrical 'Bridge 16' over the Fallowfield Loop - numbering is from the Fairfield end.
[© Andy Chard 2020] 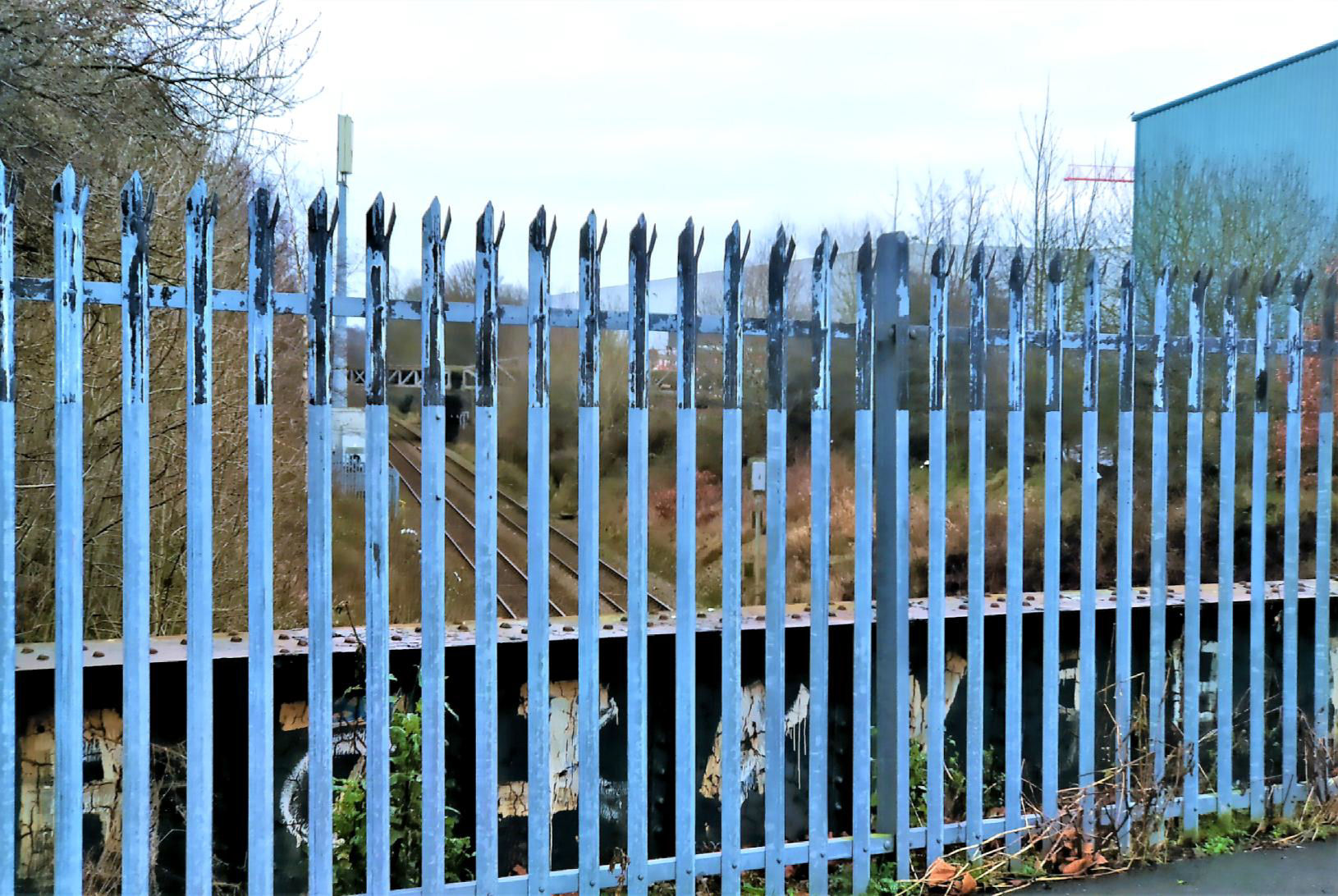 Crossing over the line from Manchester to Romiley and Rose Hill Marple/New Mills/Chinley.
[© John Cameron 2020] 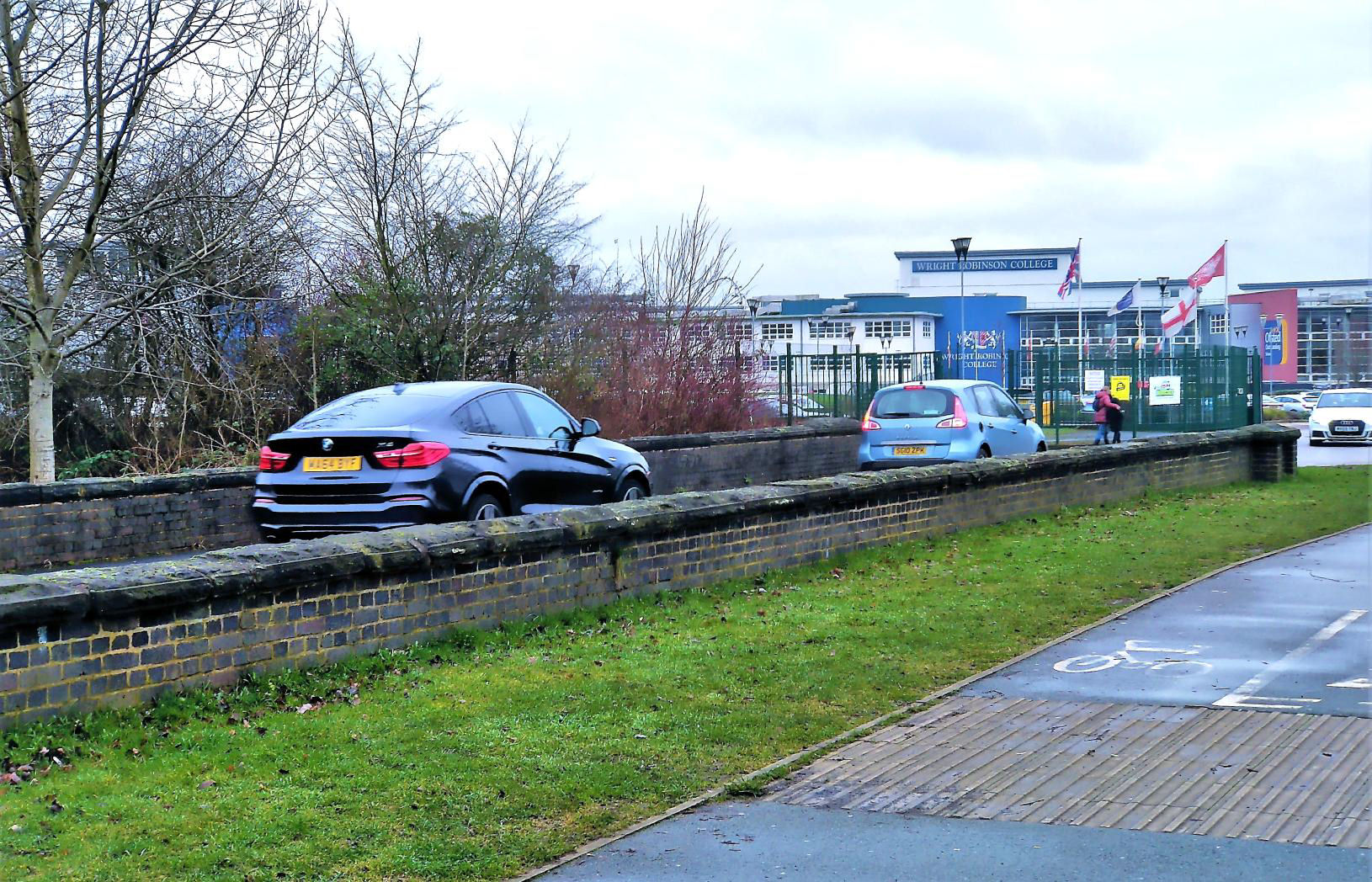 Soon after Hyde Road station the railway ran in a deep cutting to Fairfield which has been filled in, as here. The once tall overbridge is now buried except for the parapets each side of the road.
[© John Cameron 2020] 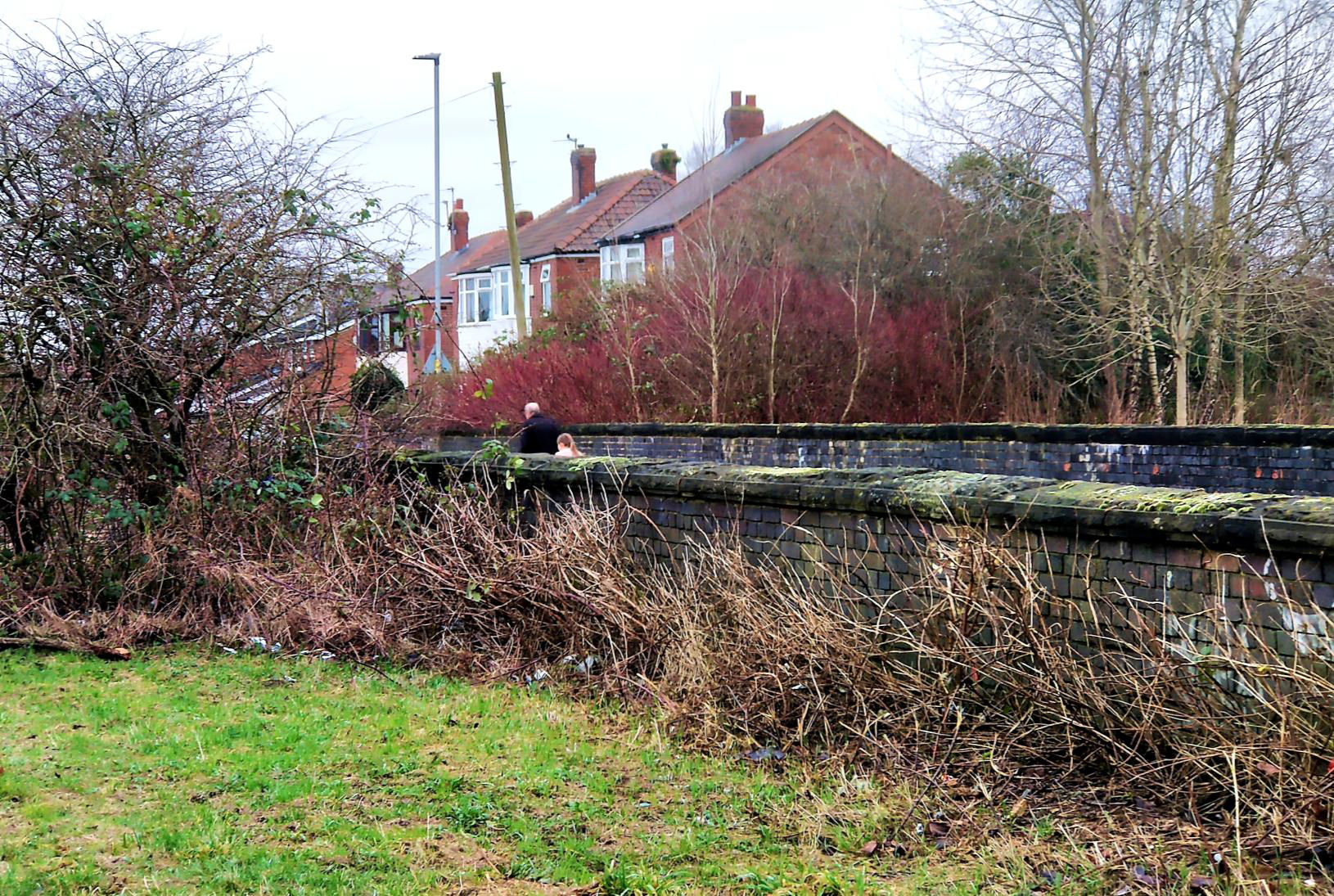 Another buried road overbridge on the filled in section.
[© John Cameron 2020] 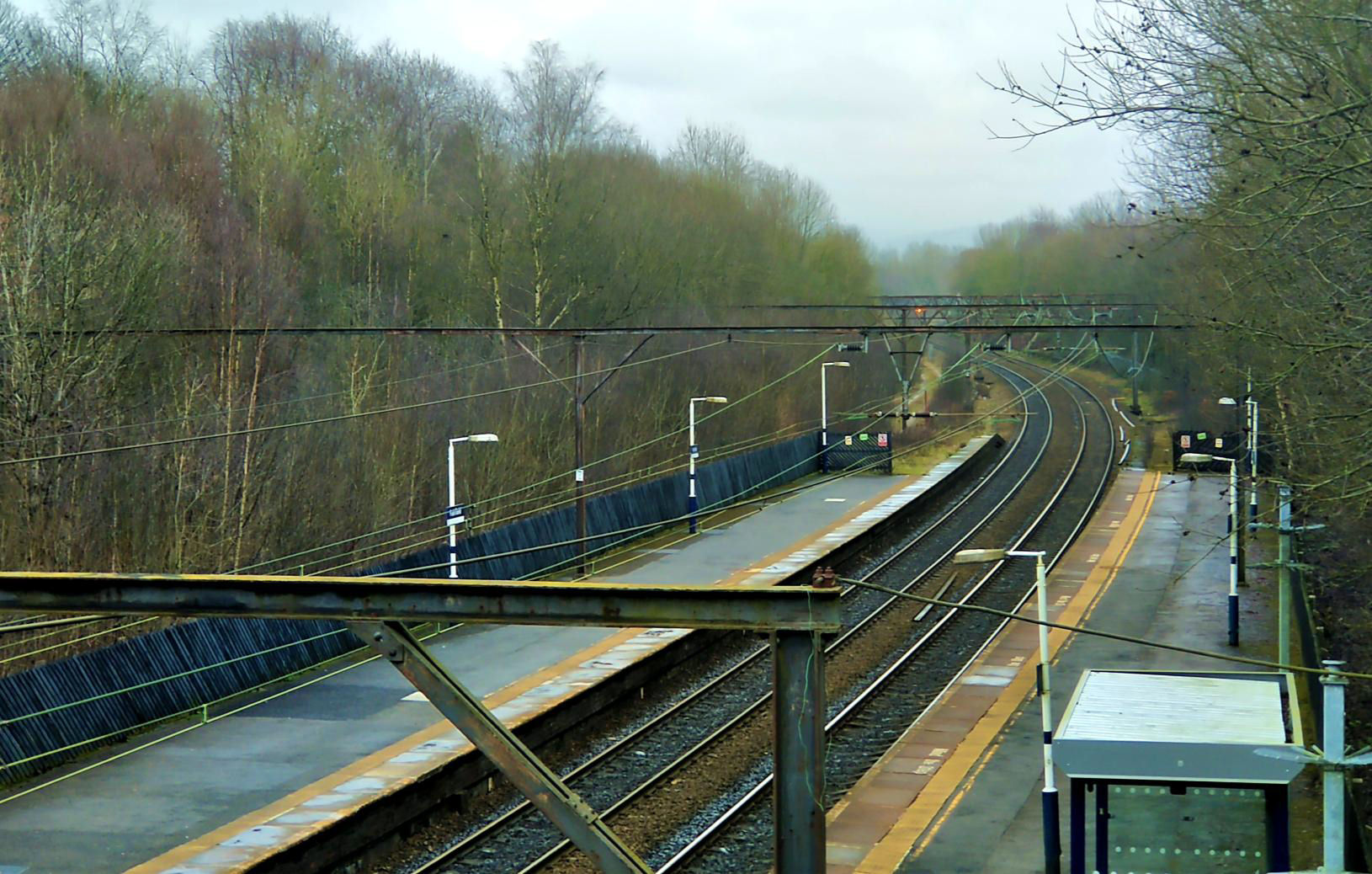 Fairfield from the overbridge looking east towards Glossop and Hadfield, there used to be two Fallowfield Loop platforms (right) with the junction beyond, and two further platforms on the left.
[© John Cameron 2020] 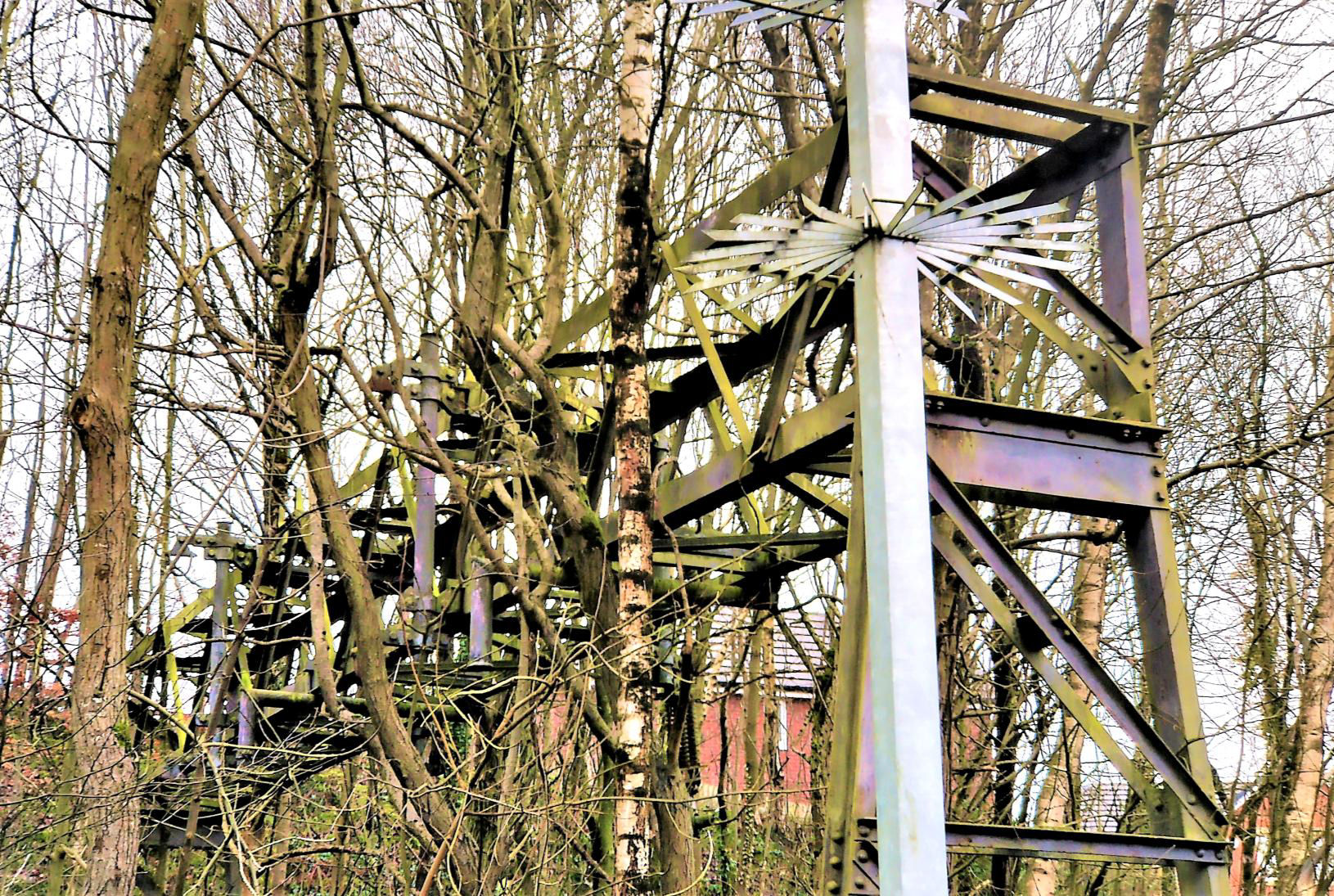 OHLE support on the Fallowfield line platforms at Fairfield with 35+ years of tree growth.
[© John Cameron 2020] 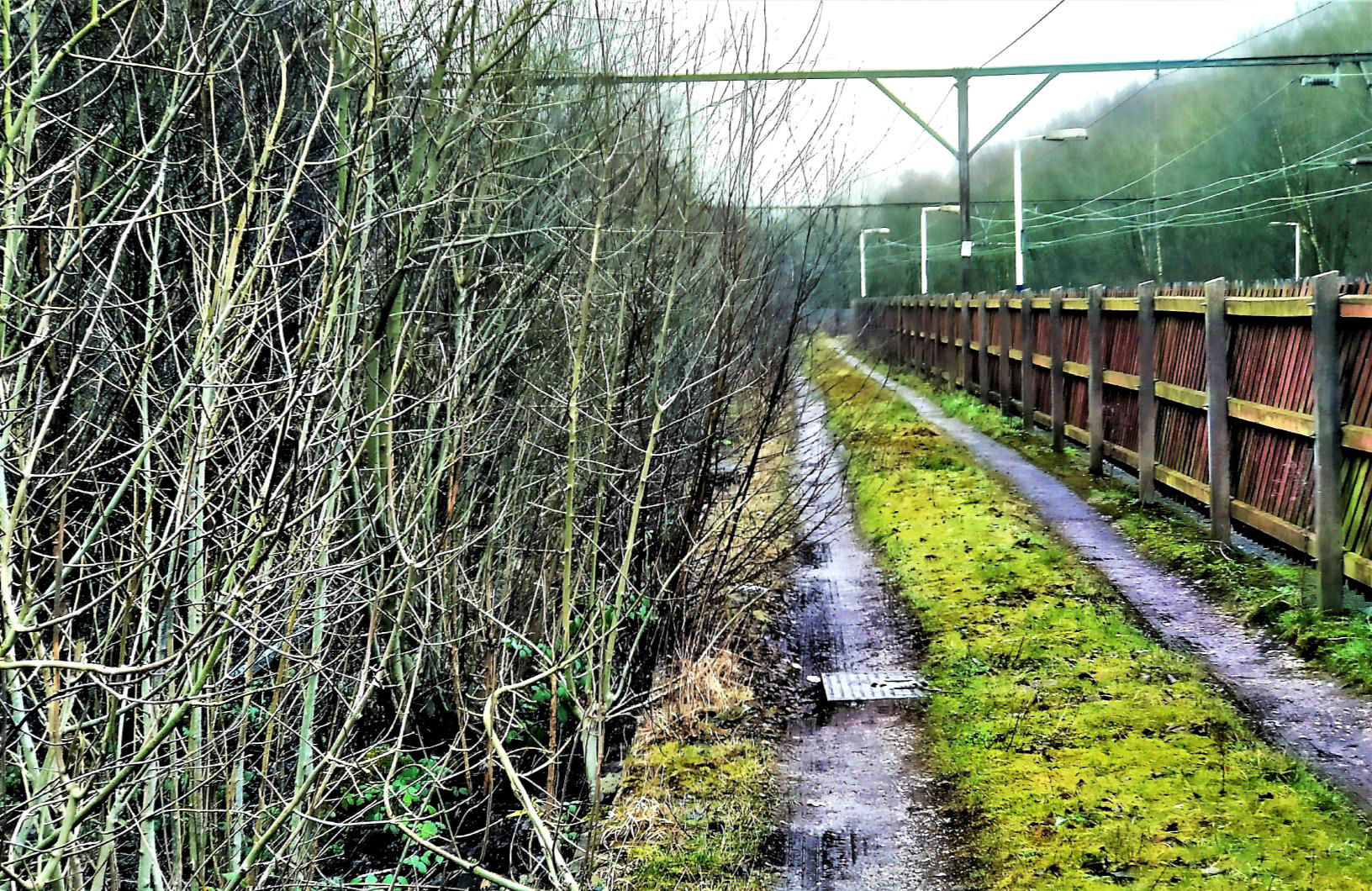 On the northern side of the station where passengers once caught trains to Manchester.
[© John Cameron 2020] 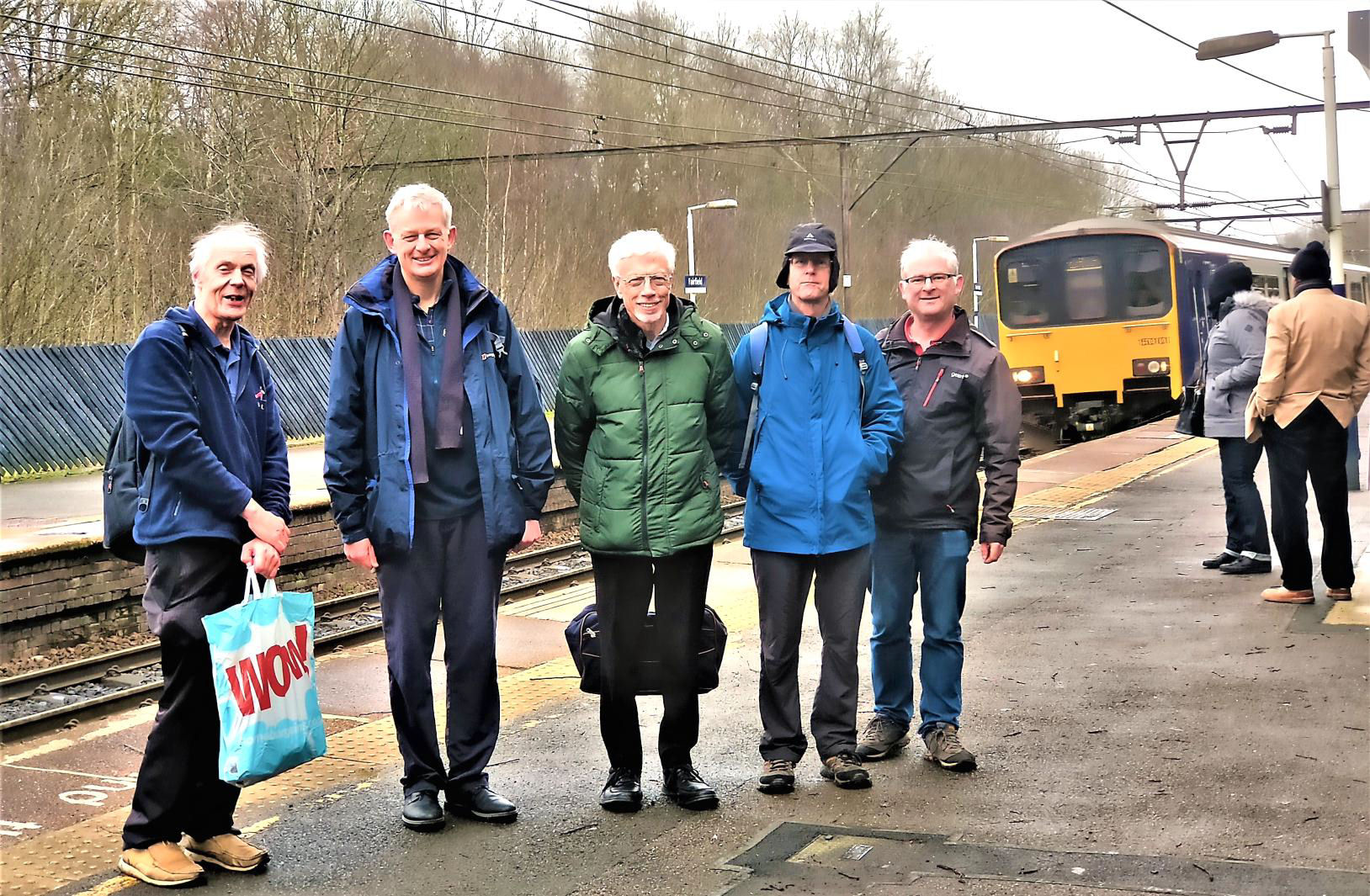 Fairfield; a Rose Hill Marple to Piccadilly train approaches, and they were hoping for a Pacer...
[© John Cameron 2020] 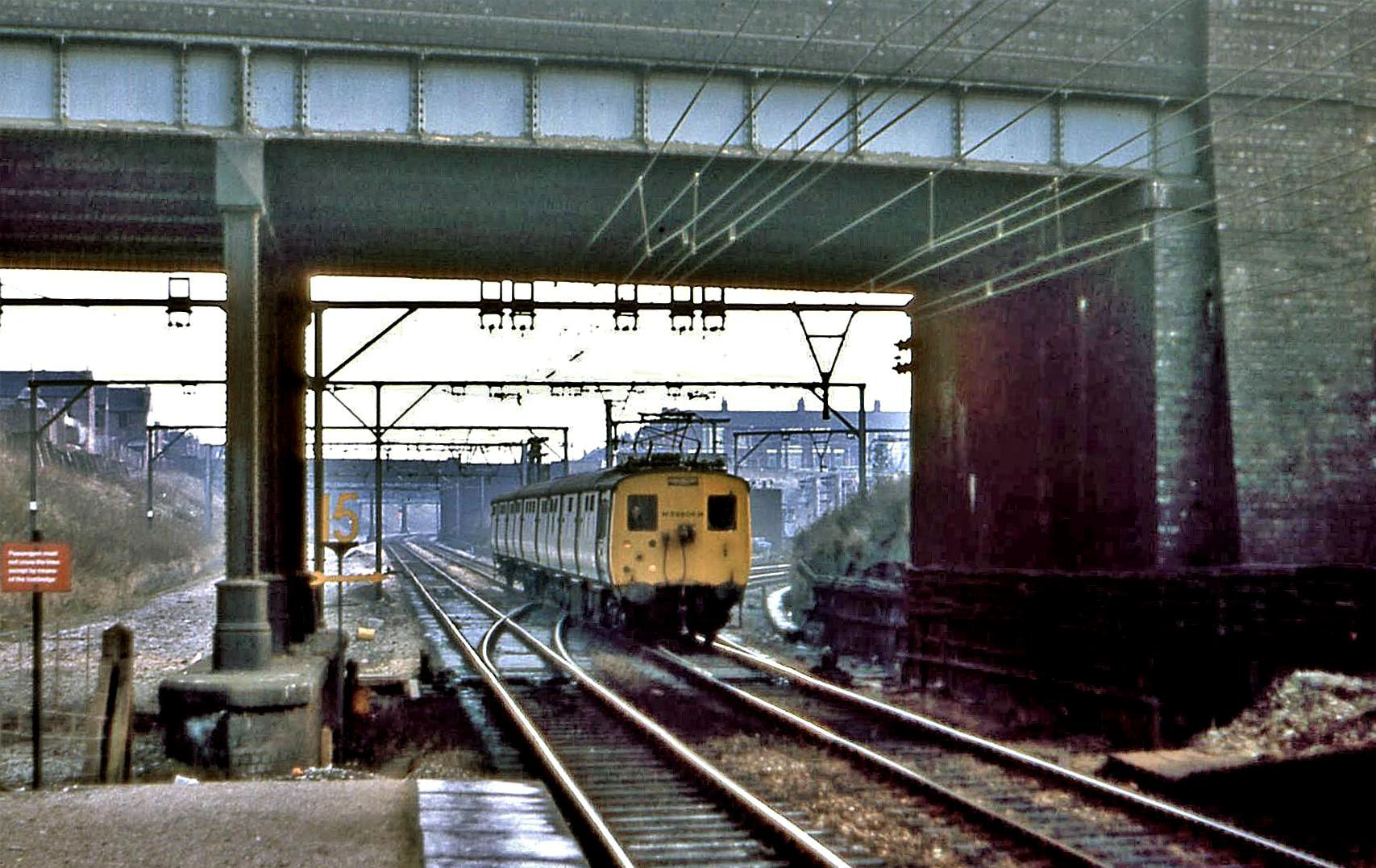 Gorton station looking east, a Class 506 Hadfield to Manchester 1500v DC EMU approaches in Feb 1975. The electrified double track curve round to Reddish Depot and the Fallowfield loop is off to the right. As can be seen, there used to be four electrified tracks along here also.
[© Ian Mortimer 2020]