Our 'Type 3 to the Sea' 10 Aug railtour was a great opportunity to sell Royal National Lifeboat Institution goods (the first RNLI shop on a moving train?), promote the Lifeboat Enthusiast Society and vitally raise awareness of water safety and the 'Float to Live' message. The RNLI is first and foremost a rescue organisation but its objective of avoiding loss of life at sea is also met by education and prevention.

All the RNLI team on board that tour thoroughly enjoyed the interaction with participants and, not surprisingly, it led to some interesting questions and discussions. Among these were questions about the two RNLI owned funicular railways at Padstow and Lizard lifeboat stations. Both stations are linked to the cliff top by steps, which provide the quickest route for crew on a shout. The funicular railways provide more sedate but essential transport for supplies, parts and rarely for casualty evacuation. The remote location and poor road access to both stations make any urgent casualty evacuation from the boats better by helicopter or by calling at nearby Falmouth or Padstow quaysides, subject to tides. The general public or anyone else very rarely, if ever, has a chance to ride on these unusual railways.

John Lawson, Chairman of the Congleton RNLI Fundraising Branch, is regularly in Padstow and well known at the station. Both Padstow and Lizard were happy to allow an organised group to make a return trip on the railways and open up their station facilities during a visit. The locations at Trevose Head (Padstow) and Kilcobben Cove (Lizard) are certainly impressive but a consequence is that access and parking is very restricted. John's visit confirmed that the group should travel on chartered transport and anything more than a small minibus was likely to be 'out of gauge' for local roads!

Planning involved sourcing a minibus and driver with a convenient start point at St Austell meeting the 05.24 ex-Bristol (a short HST to Penzance) and complete the day so members could catch the last Paddington service (with a Birmingham connection). We were advised that the railways could accommodate up to nine passengers at a time, requiring three return trips including two 'Class 5' ECS runs. Dwell time at the lifeboat stations for refreshments and a personal needs break, together with point to point times for the road journeys, were put together as a draft schedule and submitted for validation by the minibus company. It all sounds a bit familiar! (I did receive some feedback that it was not strictly necessary to define a headcode simplifier for the lift run.) Our fixture was ready to launch. 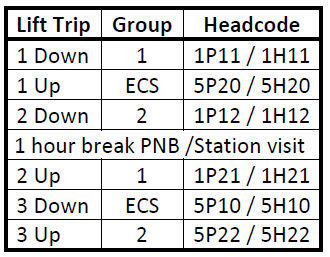 We were keen to go in October to exploit the last potentially good weather and chose a mid week date to minimise clashes [Ironically there was a totally unexpected clash with the UK Railtour's Class 313 EMU farewell tour!] Member feedback that work commitments (and the need to take a few days off work in a few cases) had prevented some attending mid-week is noted. If demand warrants a rerun in Spring 2020, it will be on a Saturday.

With a full complement of 16 places sold I set off to the Duchy the day before and GWR treated me to a IET requiring a complete shut down and reset at Newton Abbot resulting in a 34 minute delay. The shuffling of passengers within and between 2x5 car sets to alight at short platforms in Cornwall is worthy of an entire report! I soon realised that my already full baggage containing tea, coffee, sugar, cups, lids and RNLI sales items would not be able to ascend the 'bank' from St Austell Travelodge to the station without assistance. Once a large carton of fresh milk was added in the morning, the 'UK Bus Checker' app was made good use of to identify public transport up the hill.

Allen's Travel minibus (KT08 WBD) arrived right time off shed into a bay 'platform' by St Austell bus station and at 09.35 all passengers were accounted for, on board and issued with their 'RNLI Goody Bags'. I occupied the Second Man's seat to assist with route knowledge and our very competent and jovial driver Lynette explained that the booked driver had called in sick so she had been rostered at short notice. (Train Operators please note, spare crews on standby avoid short notice cancellations.)

We arrived a few minutes early at Trevose Head, where the glorious sunny weather and vista were just stunning. Once the minibus was shut down and stabled, Lynette joined our group for the descent to the station. The 2ft gauge railway, 32.34m long, was opened in 2001. Its sole car (Alimark, Rushden No20274/811162) runs at 0.35m/s at a gradient of 48o, with a maximum of 12 passengers (in fact). An unexpected bonus was allowing a participant to press the button to begin the descent. Local member Maurice Dart was nominated as this was his last section of required 'passenger' track in Cornwall!

At the 'base station', we were greeted by our host, the station visits officer. The first lifeboat based at Padstow was from 1827, taken over by RNLI in the 1850s. The first three stations were in Padstow Estuary but gradual silting up meant launches were not possible in all tides, so a new boathouse was built in 1967 on the current site, from asbestos and steel. The current spectacular boathouse on stilts was completed in 2006, officially opened 17 Sep that year, costing a mere £5.5M. All materials were delivered by sea other than the concrete that was piped down from above. Even though it is now six miles from Padstow, the lifeboat crew regularly beat the 15 minute target to arrive for callouts.

The new boathouse could house the larger Tamar class lifeboat 16-04 'Spirit of Padstow' (ON 1283) that went into service in 2006 and cost over £2M. This was the second lifeboat generously provided by local resident Miss H B Allen. When we arrived the lifeboat was partway down the slipway as the winching equipment was receiving some planned maintenance - almost as if specially scheduled for our visit. The boat is powered by two Caterpillar C18 diesels generating 2,000 hp, sufficient to make 25 knots for up to 10 hours and also have a towing capacity of seven tonnes. Tamar class lifeboats carry a small inflatable powered boat for use in shallow waters and this launches 'Thunderbird style' from beneath the stern deck in under two minutes. All five seats in the wheelhouse are equipped with flat screens and all propulsion, radar and communication systems are available to any seat such that all the boat's systems can be operated with the crew safely strapped into their pneumatic seats at all times.

We enjoyed a relaxed visit with stunning vistas of the coastline, hot drinks and, of course, the chance to purchase RNLI Christmas cards! We were proud to present the station with a donation of almost £190 and after taking some photographs, including some random headcodes, all ascended the lift to rejoin the bus. It should be noted that some energetic members made a VSTP move on the 101 steps for an additional ride on the lift ECS. 'Up' and 'Down' direction are very appropriate terms here.

We had identified sufficient slack in the timetable to permit an unscheduled stop at Tesco in Truro to purchase lunch. Thanks to Tim Wade for identifying and temporarily reserving a large enough space for the minibus [and you didn't realise he was that big…] and then providing the necessary 'Victorian' style shunter's hand signals to bring the vehicle to a stand in the correct position for disembarkation.

While the station at Lizard is of the same spectacular design as Padstow, it is nestled in a much narrower ravine in the cliffs and the approach lane is very narrow. We had been advised that the minibus needed to return ECS back down the single track because parking is so limited that we would be blocked in for an undetermined period if a 'shout' took place during our visit. The railway, which is the most southerly in mainland Britain, opened in 1995 and runs at an angle of 38o for 45m. The car is Austin & McLean Ltd, Bournemouth, NoFR00-01 HFC. This railway replaced simple lifts built in 1960 and its construction was part of the rebuild in 1995 on the original boathouse foundations. Like at Padstow, the car rides on 2ft gauge Alimak track but, unlike Padstow, is also supported by outer 8ft gauge (that's definitely broad) rails, allowing a wider riding vehicle.

Martyn Chambers, Station Visits and Community Safety Officer, welcomed us, provided a safety briefing and information about the station and its Tamar class boat 16-20 'Rose' (ON1300).

This went into service in 2011 with the current station being completed in 2012. We were introduced to the Coxswain and the Coxswain Mechanic, the only paid personnel. Our tea and coffee micro buffet service began again and we viewed various exhibits and enjoyed retail opportunities before ascending.

A cheque for nearly £190 was presented to Martyn and, before departure, some members had the opportunity to view the winding gear at the summit while others were more focussed on getting the funicular ECS 'in the book', with more VSTP activity noted - this time nearly 200 (Very STeeP ?) steps!

One Lizard volunteer mentioned that he was also an active member of the Helston Railway, running with steam that very afternoon. Always keen to provide added value, a phone call was made and the Railway kindly agreed to hold the last return trip for us. With some route knowledge from the second man's seat, Lynnette our driver diverted on a VSTP basis to the rather remote Railway at Prospidnick. Here our vehicle was directed by exception past the car park and down the Helston branch trackbed, stopping adjacent to the waiting train. It seemed that no token was required for this movement‽

The return trip hauled by Peckett 0-4-0ST 1788 'Kilmersdon' was thoroughly enjoyed, with the request to proceed to the stabled wagons at Truthall Halt met. Lynette completed a reversing manoeuvre back to the car park and succumbed to a request for another short diversion to the back of the yard to view an 'On Track Plant' machine. We then returned Class 1 to booked passenger set downs at Truro and St Austell in good time for the last Paddington service (and even an earlier short HST to Plymouth).

Grateful thanks to all personnel at Padstow and Lizard RNLI, the Helston Railway, Allen's Travel and Lynette our fantastic driver for a very successful day out and some superb Cornish weather. Finally sincere thanks to all participants whose fares enabled us to donate nearly £380 to the RNLI, making a total of £16,488 donated to the charity by the BLS in the last two years. YOU ARE ALL LIFESAVERS. 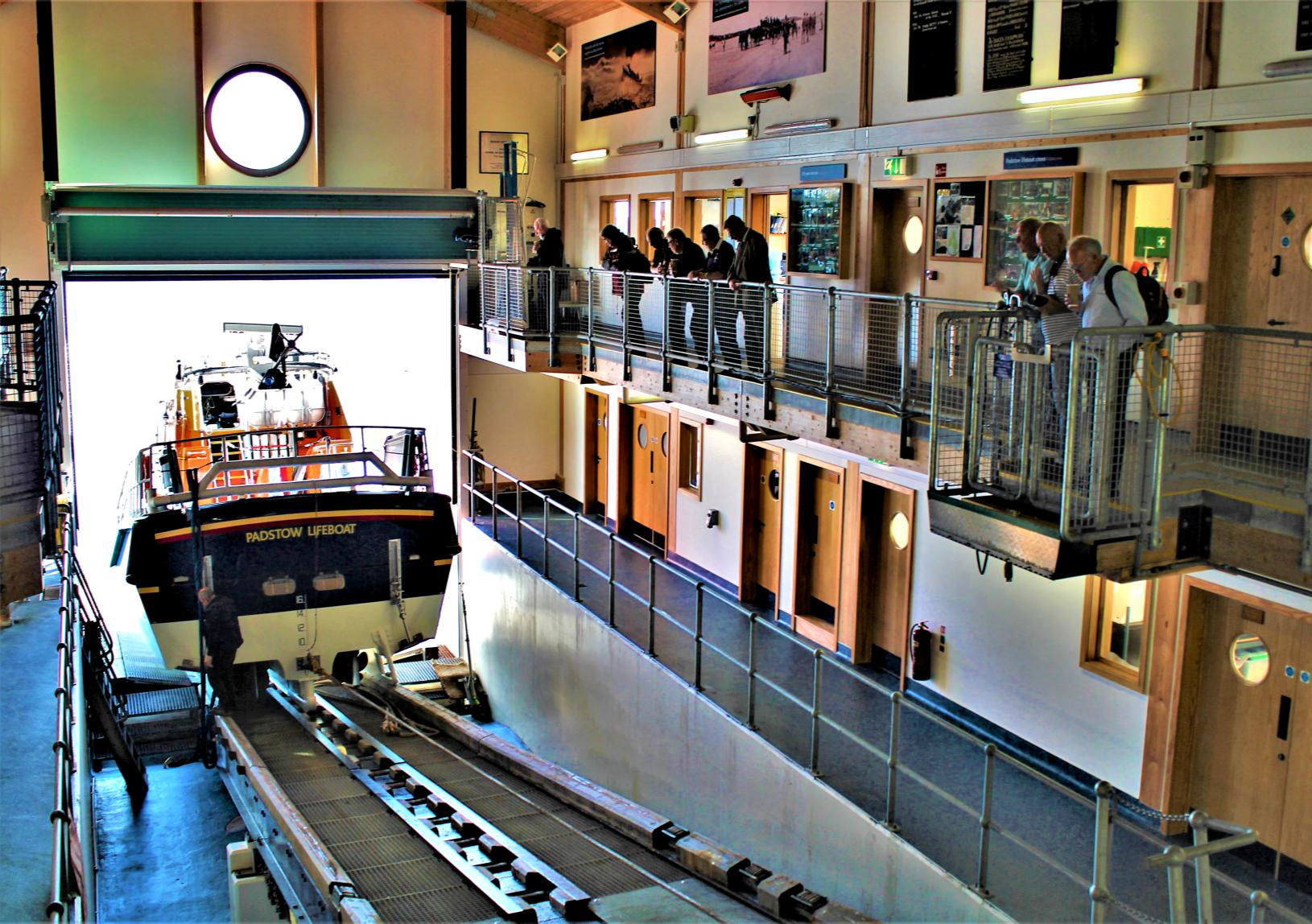 An intense discussion is taking place on the balcony about the criteria to properly 'do' the lifeboat launch slip (available bidirectionally).
[© Mark Thomas 2019] 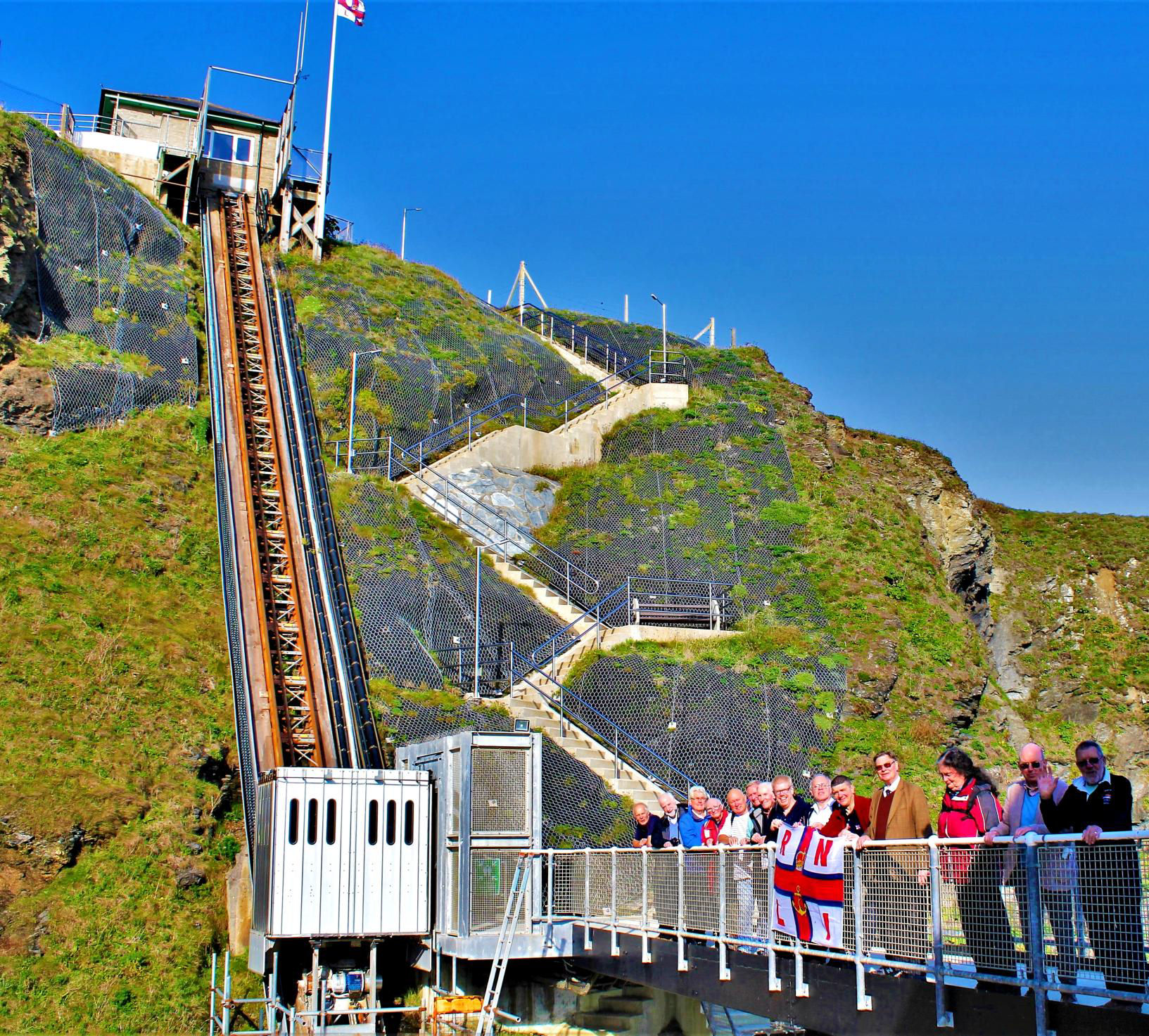 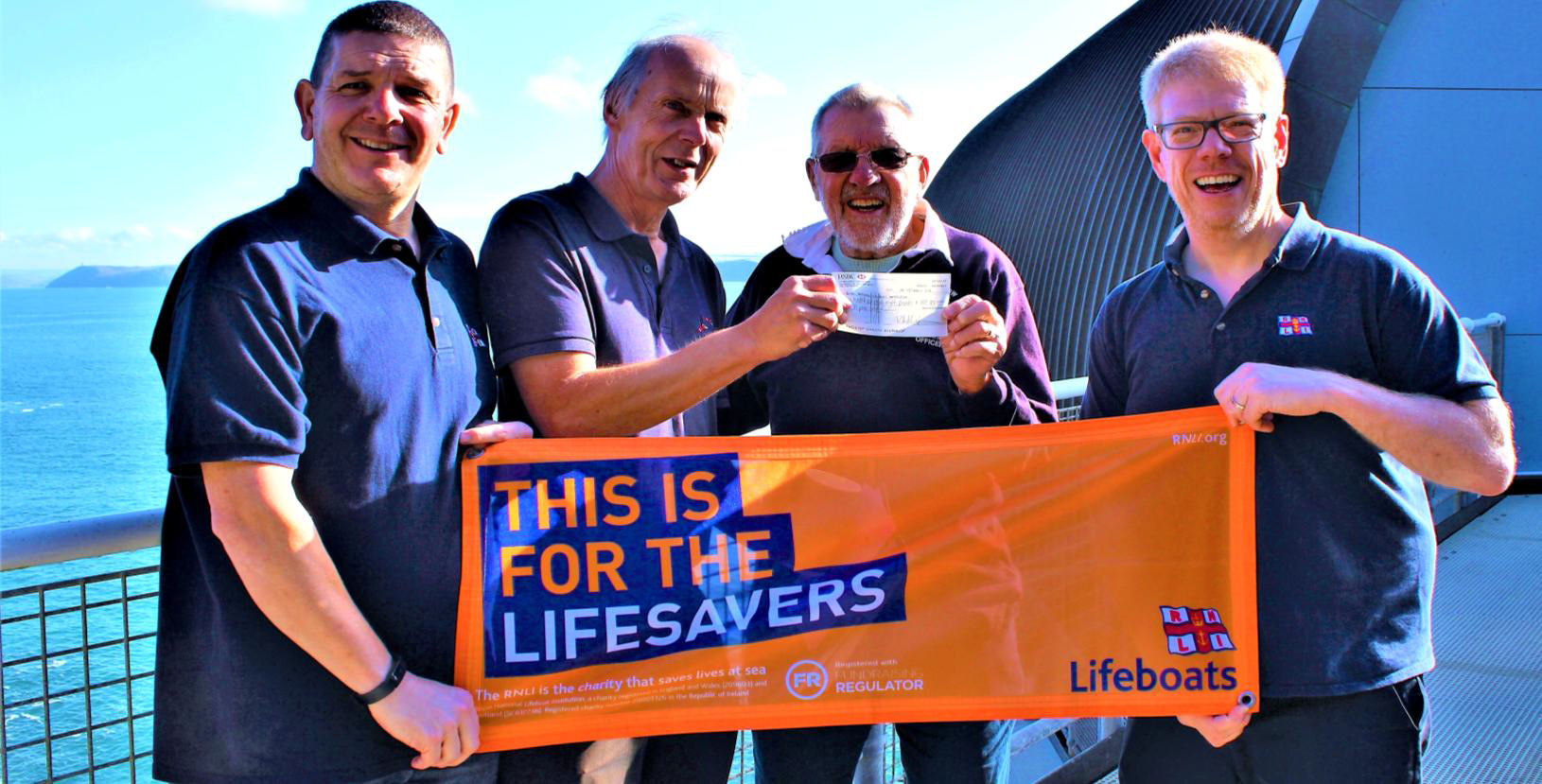 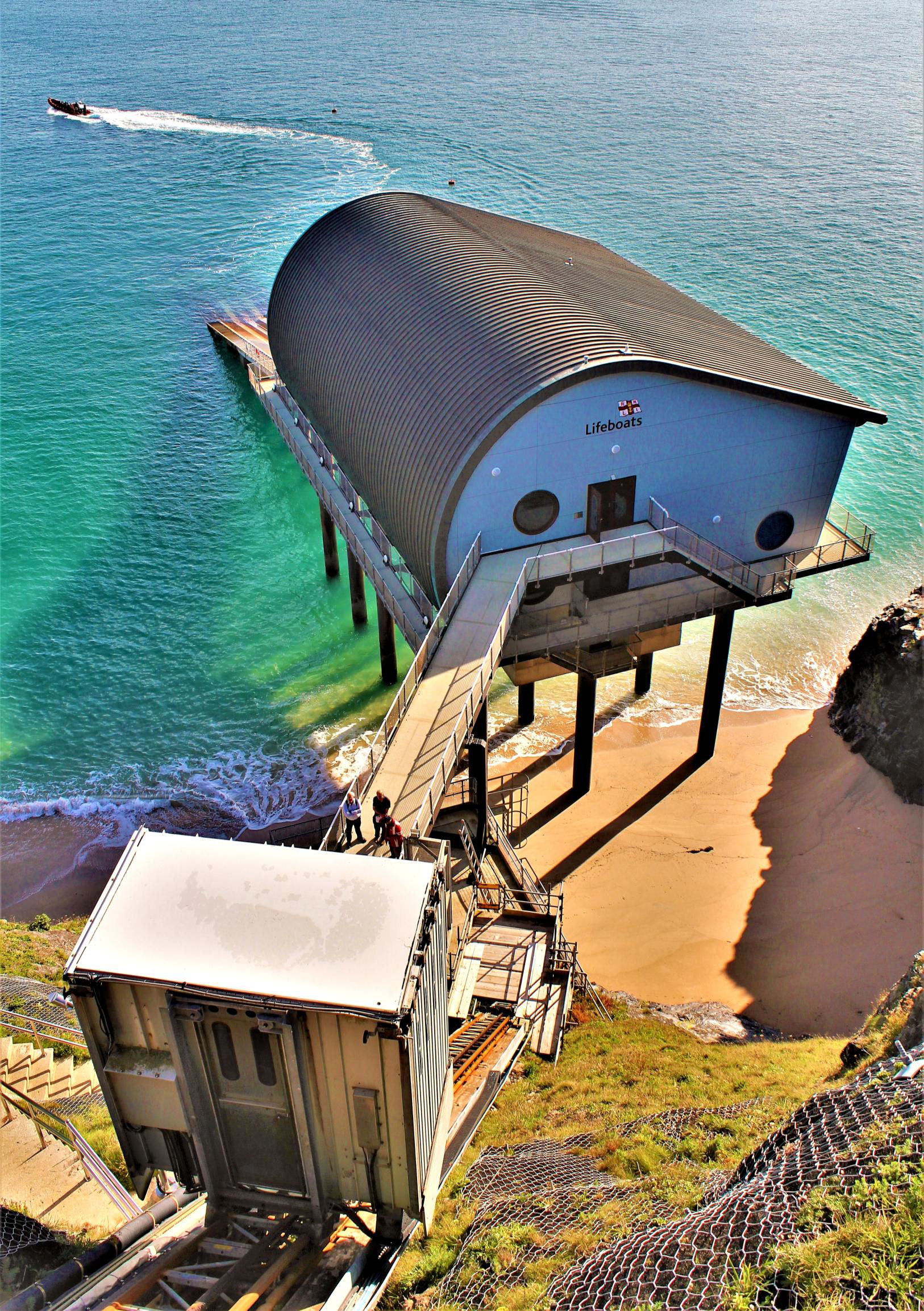 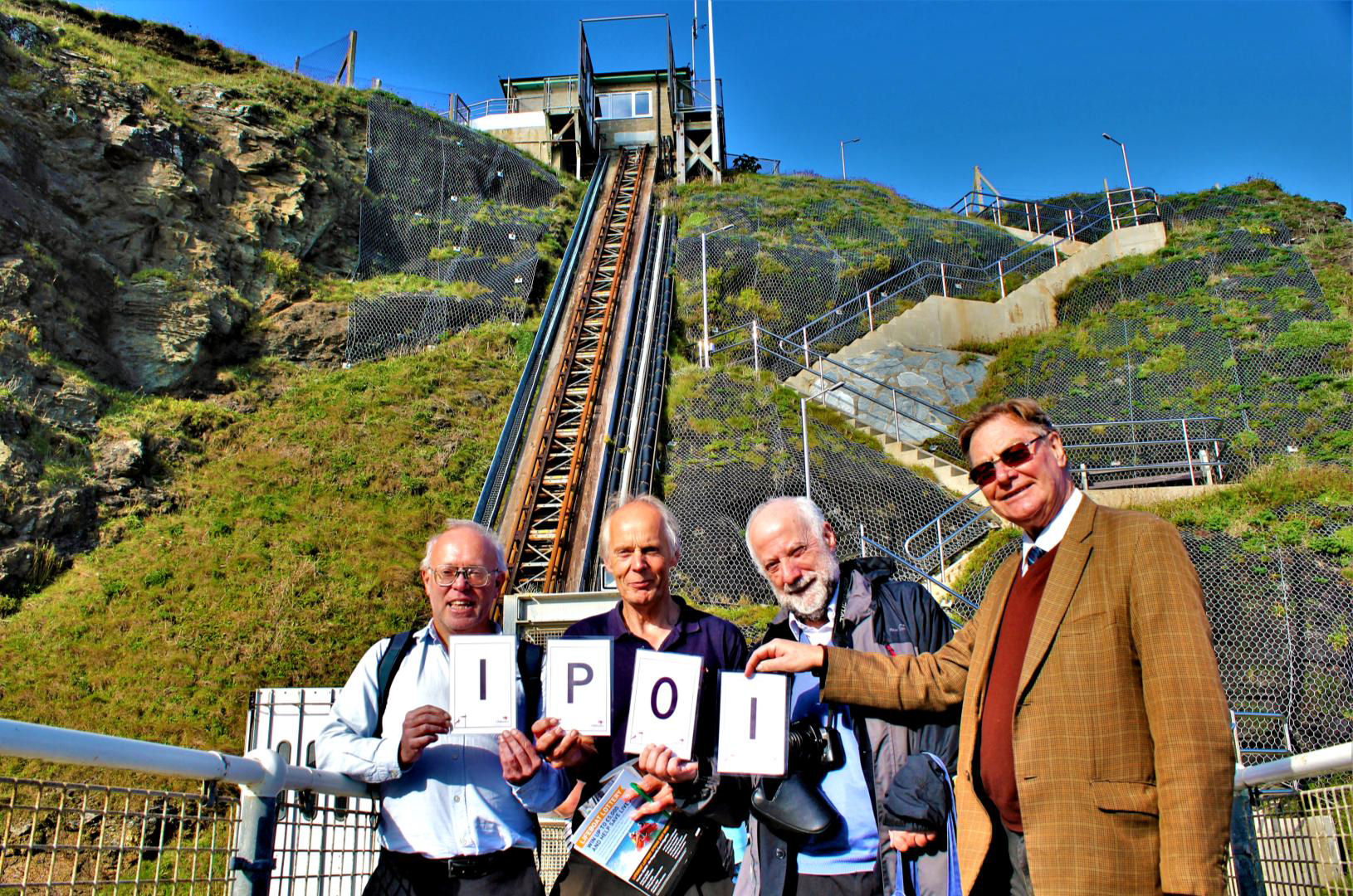 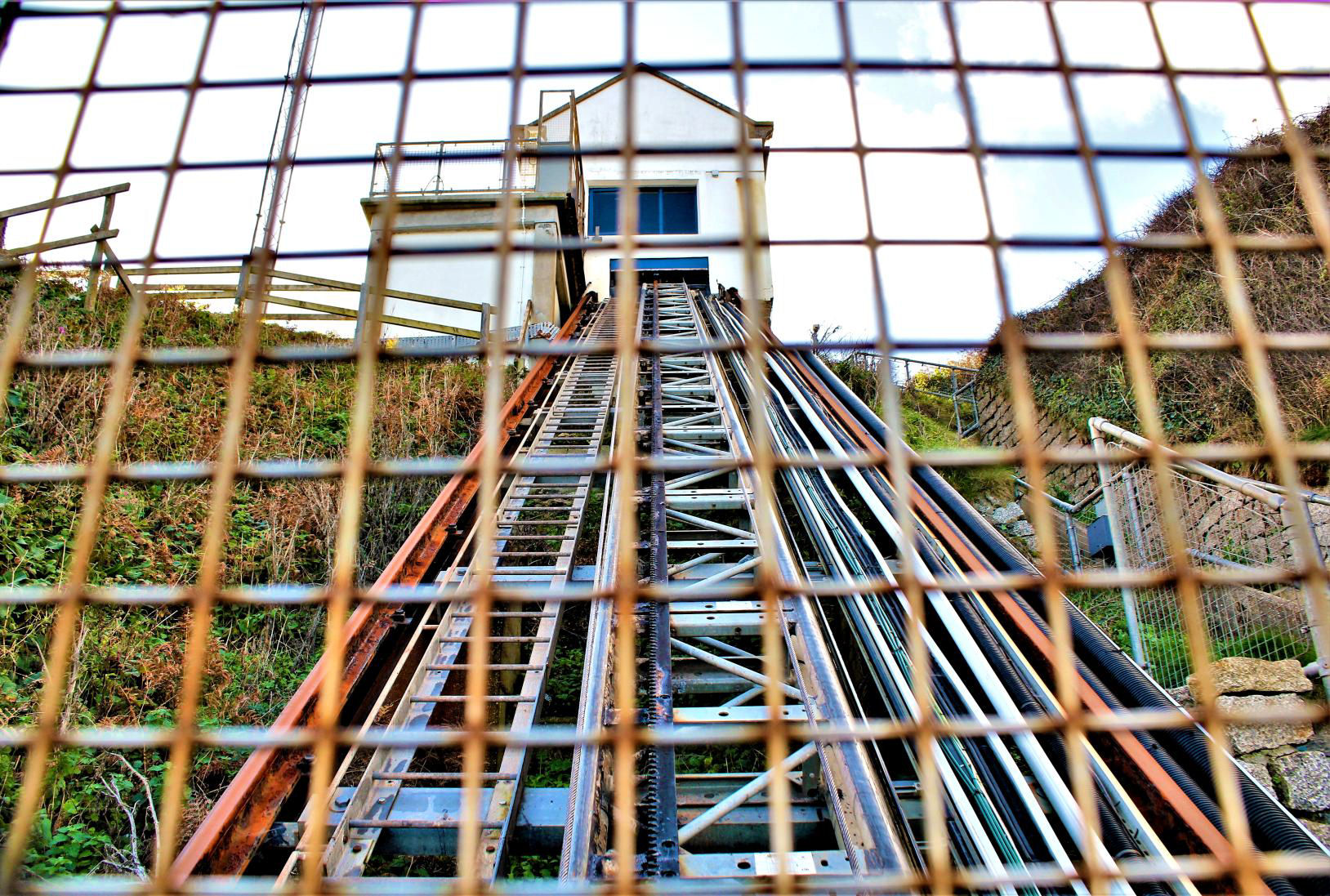 The Lizard, mainland Britain's most southerly railway and mixed gauge too. View from the car/cage from half way up (or down depending on your point of view).
[© Mark Thomas 2019] 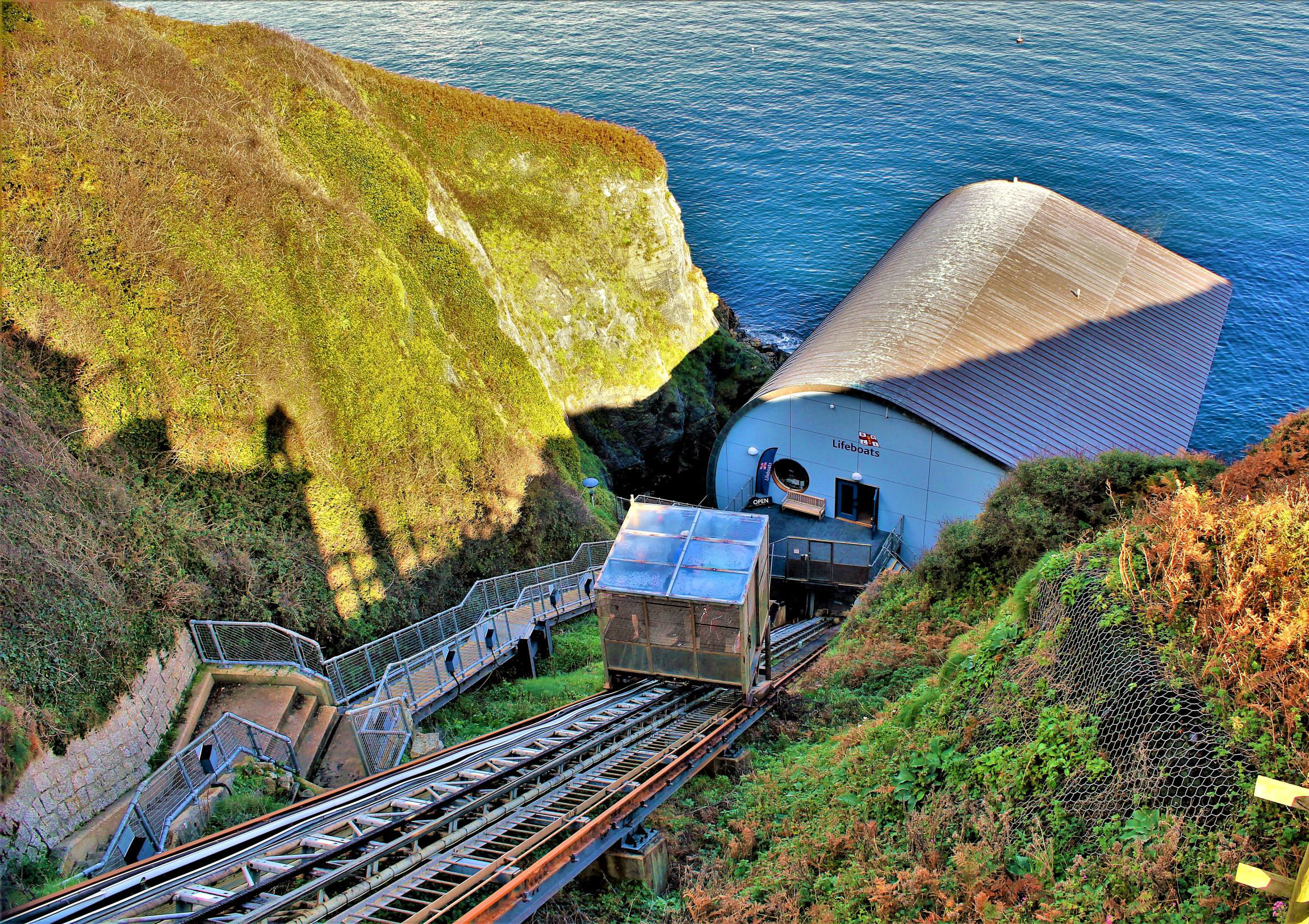 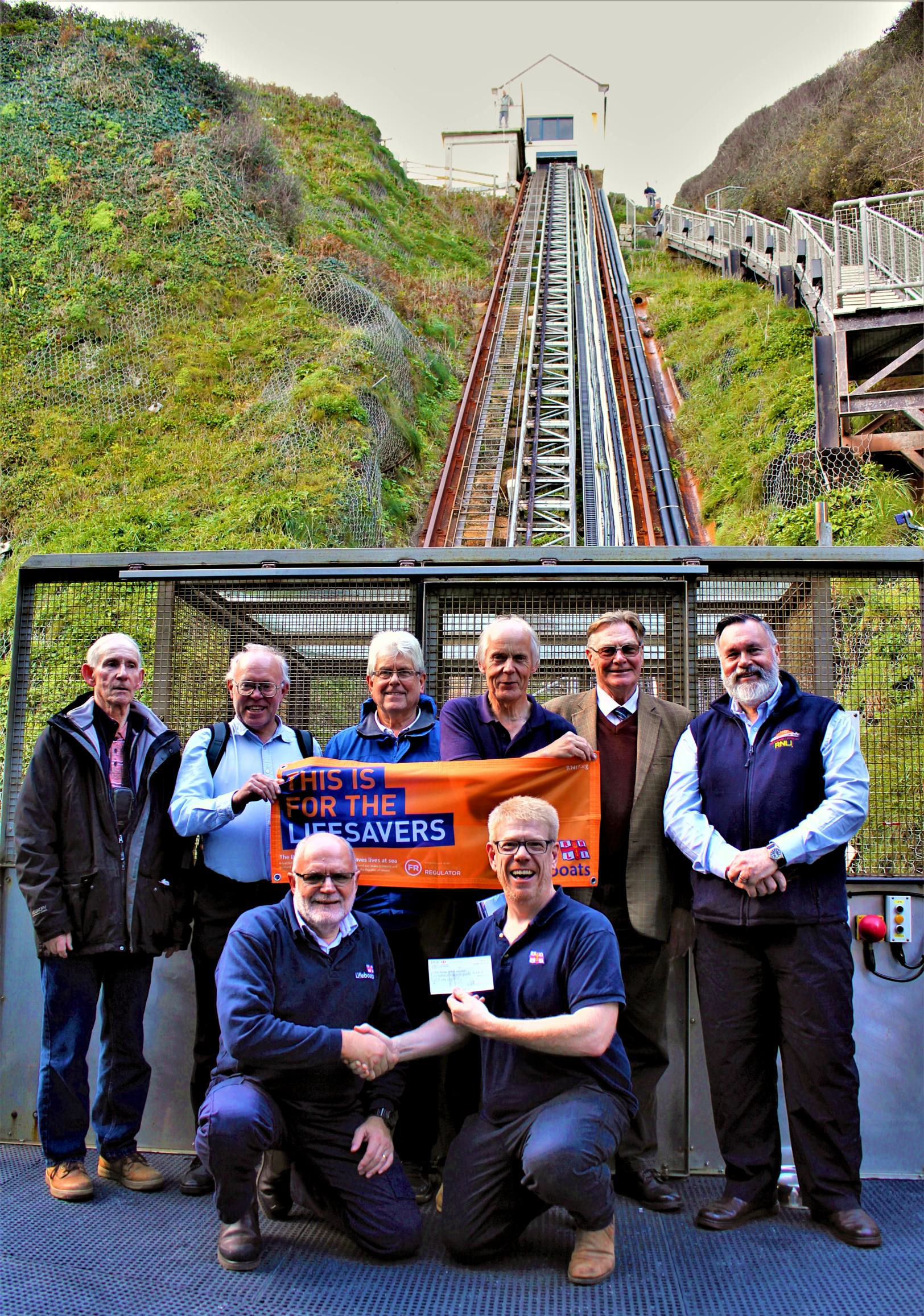 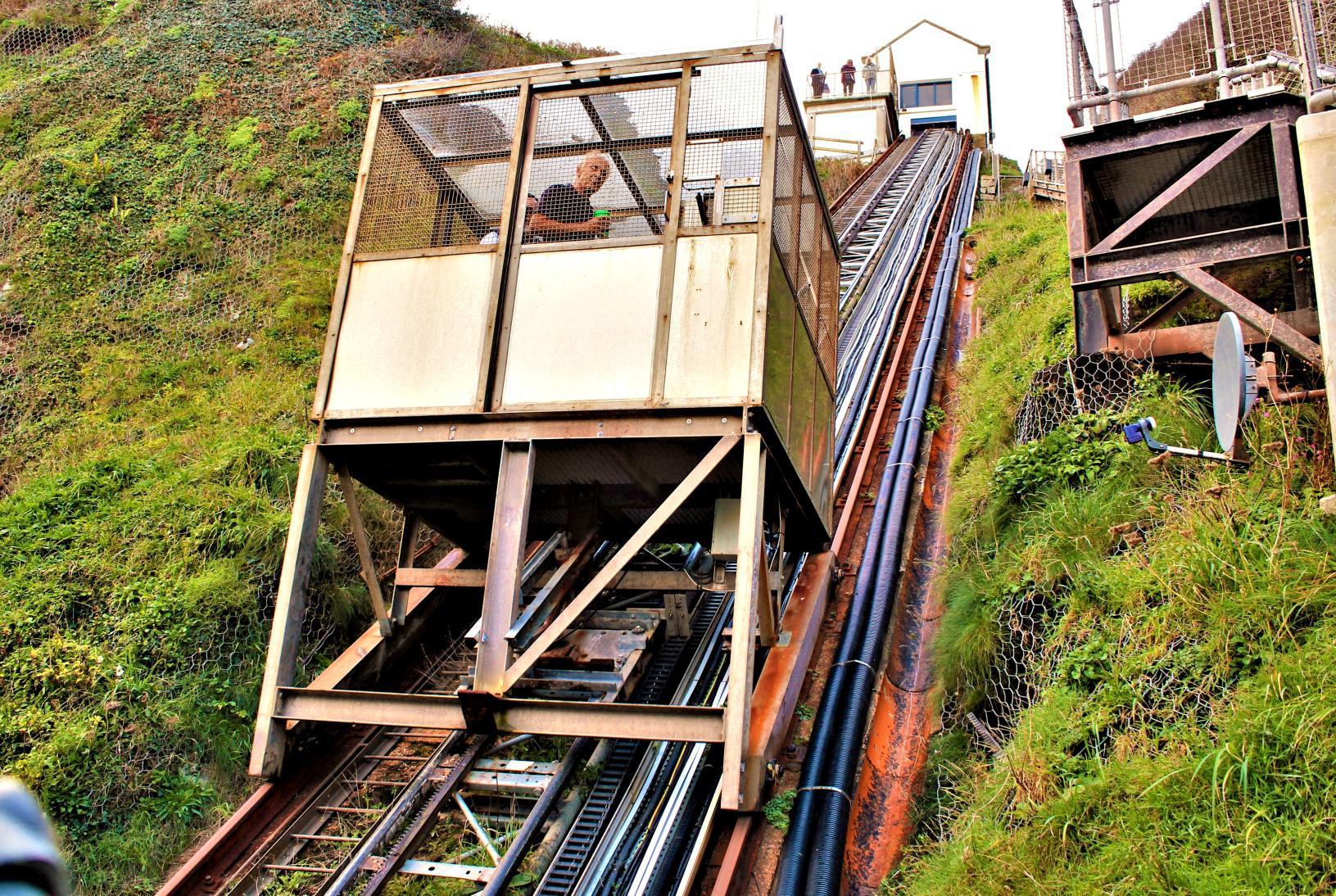 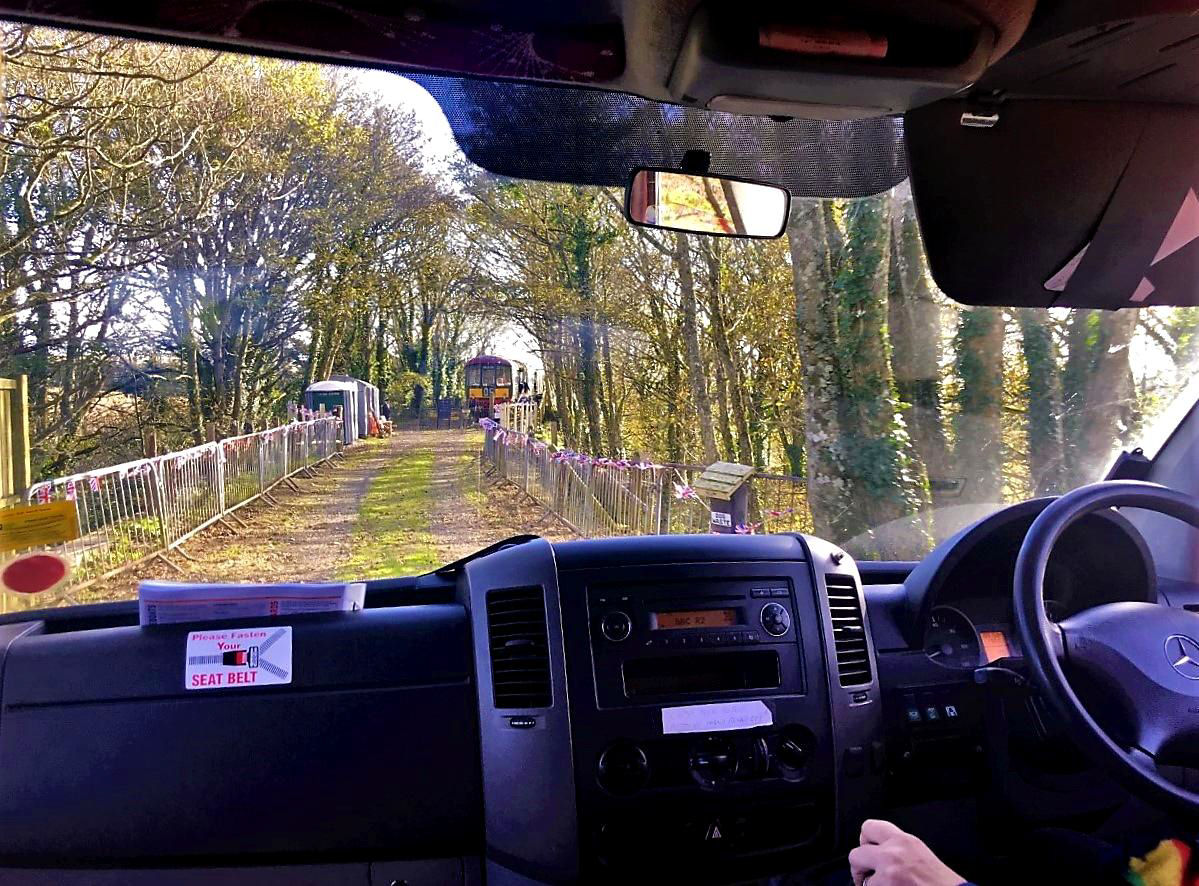 Arriving at Prospidnick Halt from the north along the Helston branch trackbed.
[© Mark Thomas 2019] 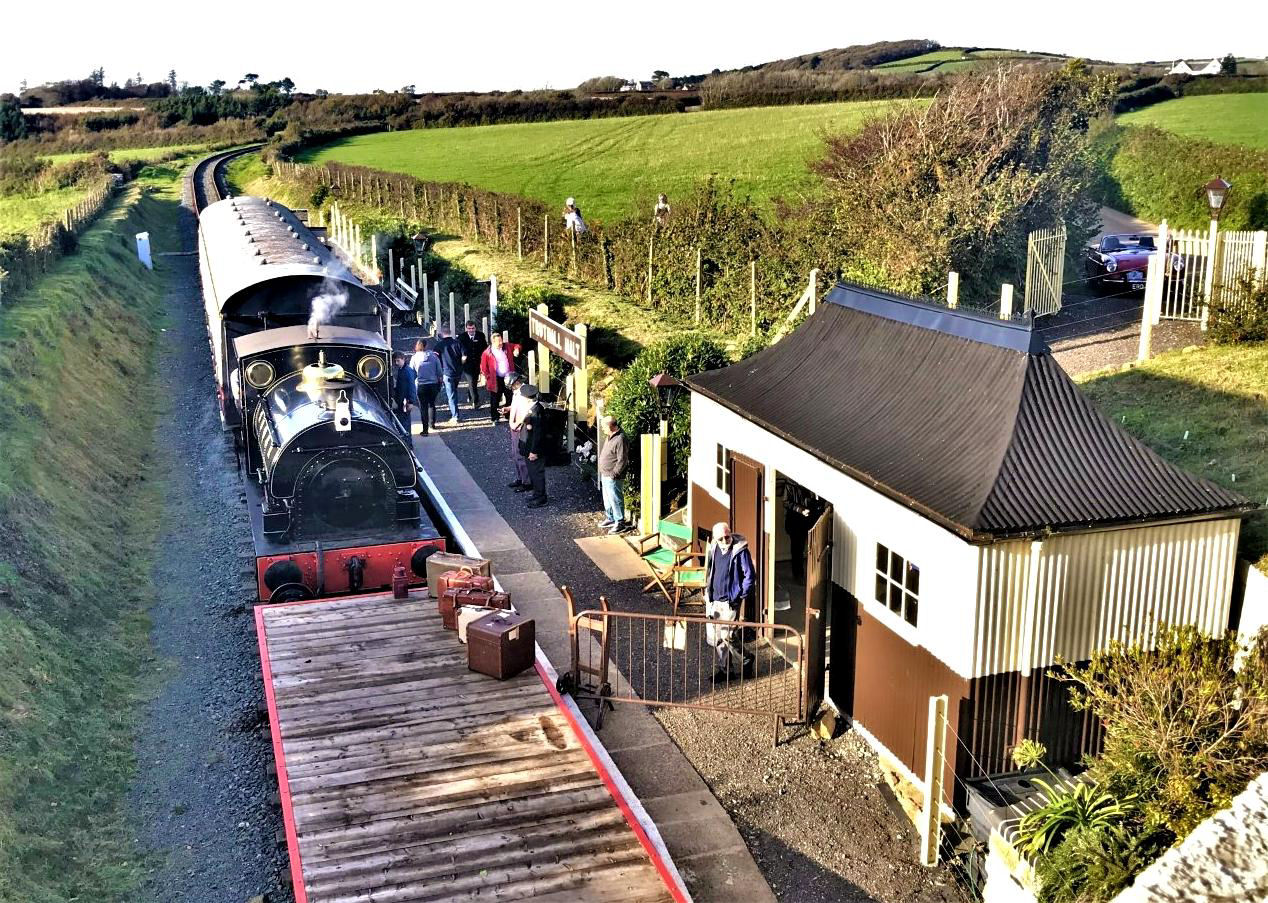 The current southern terminuses at Truthall Halt (honestly) - looking north, note access path off to the right. The future prospisnicks for this friendly line are good.
[© Mark Thomas 2019]