Situated by the River Itchen in Southampton, Riverside Park is no doubt a very lovely place on a nice day. Sadly today wasn't; 17 soggy members met up for Day 2 of our Solent sojourn. The park centre has been the home for the last 60 years to Southampton Society of Model Engineers. [They were actually founded in 1912 as the Southampton Power Boat Club.] We were made most welcome in the cosy and welcoming clubhouse where their members who'd braved the deluge provided unlimited biscuits and hot drinks. It was so wet that, unusually, normal public running was cancelled this day.

As we dried out the reassuring sound of moving rolling stock was heard and, with the rain thankfully subsiding, we started our fun a little late at 11.30. In many ways the set up was typical of model engineers. The 360yd public run 7¼" gauge ground level track (OP 1997) is the outside with the original (1962) elevated 3½/5" in the centre, but with some very significant non-public 7¼" inside that. Running is the usual Sunday golden hours of 13.00-16.00 (when you want to be in many places at once) and until the day of our visit they hadn't missed public running this season. Normal running involves both circuits which is possible due to a footbridge over the 7¼" at the single station to access the elevated line platform. Tracks are deliberately unballasted to prevent ballast from being misused!

We started on the ground level 7¼" track where 'Vulcan', a red battery loco, and two very open sit-astride coaches awaited. Splitting into two groups, having done what track we could in the shed area, our train propelled out of the shed to the headshunt to access the main line connection. This quite extensive layout is within the elevated circuit - a moveable section of which allows access to the public ground level outer loop. This was completed and we returned to allow the second party to travel.

Proper BLS activity then began, the turntable and all possible tracks off it were griced. This included the steep 'ski slope' loading line and most of the steaming bays. Despite raining again, 'people power' was used with help from 'Vulcan' on the steep loading line. While this was taking place, the elevated line started running. D1015 and two sit-astride coaches took us around the circuit. A moveable 'sector plate' accessing the shed is expected to be commissioned this winter; its mechanics were explained.

'Vulcan' and the coaches were returned to the shed but not ECS of course (!). Then a single seat truck was procured to complete the 7¼" layout to all extremities for all that wanted to do this (nearly all).

By now at 13.15 the visit had gone quickly, so having profusely thanked our hosts for the much appreciated efforts they made to meet our needs despite the not great weather, we moved on. There was free time before the next visit so we all headed our own ways. With a few others I had a ride with another 'Western' D1000 on the always interesting 1,000yd Royal Victoria Railway (10¼"). A good number crossed to West Sussex and were made welcome at the 850yd intricate Stansted Park Light Railway (7¼") near Rowlands Castle which was running - including shed visits. There is great scope for an 'all line' visit here. A couple also walked part of the Hayling Island branch (CP 4 Nov 1963) as well - the whole 6 mile route is walkable from Havant station except the missing Langstone Harbour bridge.

Then along a wet M27 to Hayling Island, which was larger and dare I say nicer than I remembered! Now called the Hayling Seaside Railway, this one mile long 2ft foot gauge railway runs along the front. The relatively new railway first ran on 8 Aug 1988 at a nearby holiday camp before moving to the sea front where running began on 5 Jul 2003. Already well known to enthusiasts, with the railway now being up for sale, it recently featured in the national media, much to Bob Haddock, the owner's surprise who, in his 70s, is retiring. Bob was there to greet us and was our special train guard.

Still blustery but now sunny with wonderful views across the busy Solent, 17 members, a slightly different 'line up' from the morning, met up. There was no catering but nearby facilities offered the usual seaside delights and members were seen enjoying themselves.

We began (after public running) at 16.30 with steam outline diesel 'Jack' powering two nicely enclosed coaches. Leaving from the now main base Eastoke Corner at the eastern end we headed out onto the main line which winds its way via the midway Mengham Road station along the sea front to the other (western) terminus Beachlands, where the shed etc was previously. The line has shortened here. Stubs of tracks can be seen but the only other accessible line is the run-round loop. Our train did as much of this as possible but due to curvature and, of course, spring loaded points we couldn't reach the end.

Heading back we retraced our tracks reversing into the landside midway loop but not beyond due to a longstanding points issue. Then it was back to Eastoke Corner station. 'Jack' ran round to propel us as far as possible into the run round loop. This done we headed off to Road 3 of the adjacent 5-road new shed, to the buffer stops. Assuming that was it as the other roads were occupied, much to our surprise we were then asked to transfer to the two coaches on the blocks in Road 4.

Diesel Hydraulic 'Alan B' sneaked on, returning us to the passenger platform where the tour finished. This method of working must be encouraged for future visits, as it maximises track and haulage in the quickest time! The very efficient work meant an early finish, probably welcome after a frenetic but fun weekend. Many thanks to the railways, and especially to our member Bill Davis for all his hard work to make the whole weekend such an enjoyable success. We hope that there are many more to come! 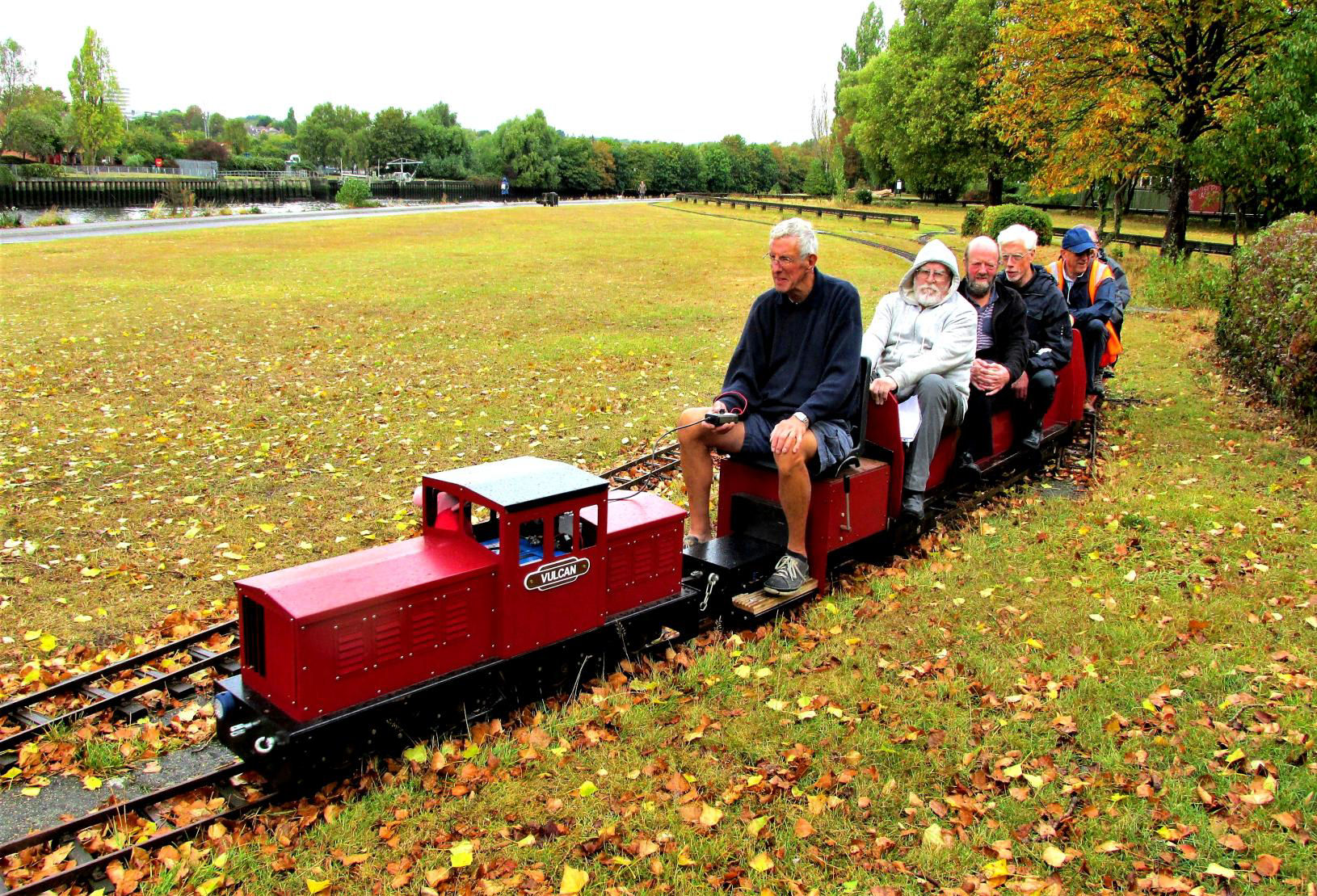 Southamptom MES, leaving the inner loop behind 'Vulcan'. The connecting line from the centre sidings, turntable and shed runs though the (temporary) gap in the elevated line behind. The River Itchen is top left.
[© Simon Mortimer 2019] 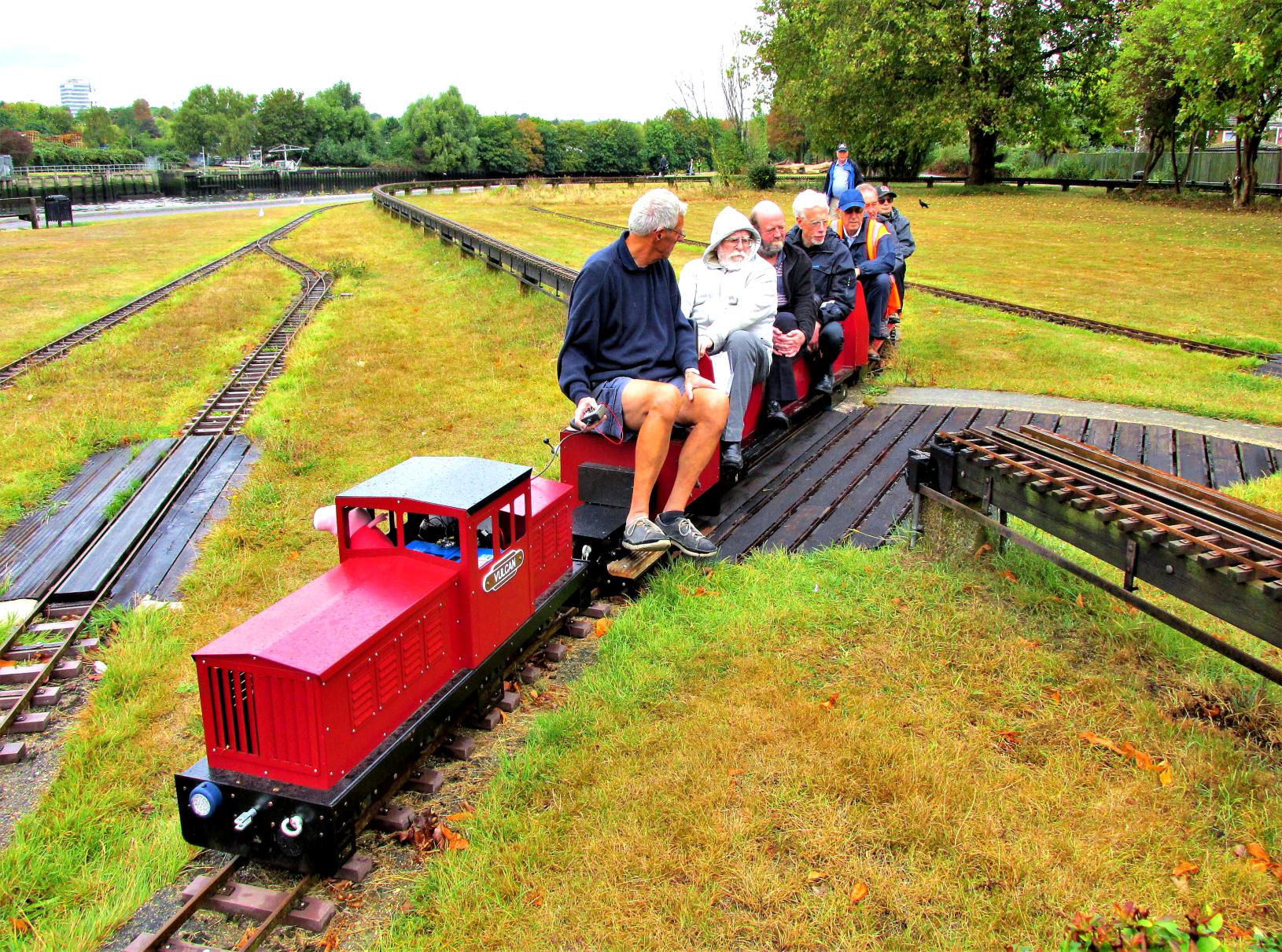 Propelling back over the connection to the headshunt (in the distance) for the shed, turntable and steaming bays.
[© Simon Mortimer 2019] 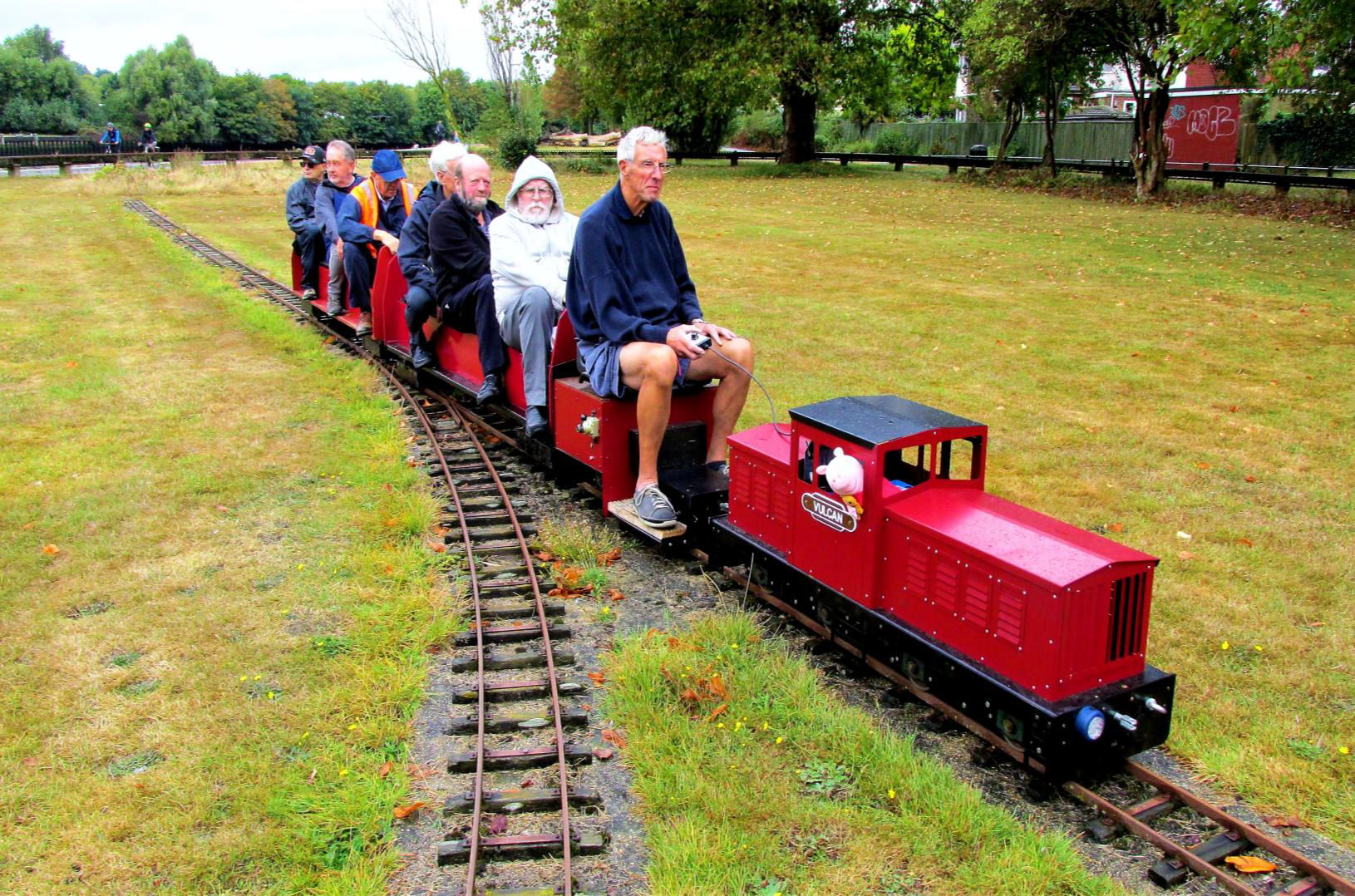 Returning from the end of the headshunt (top left); the elevated line loops round far right.
[© Simon Mortimer 2019] 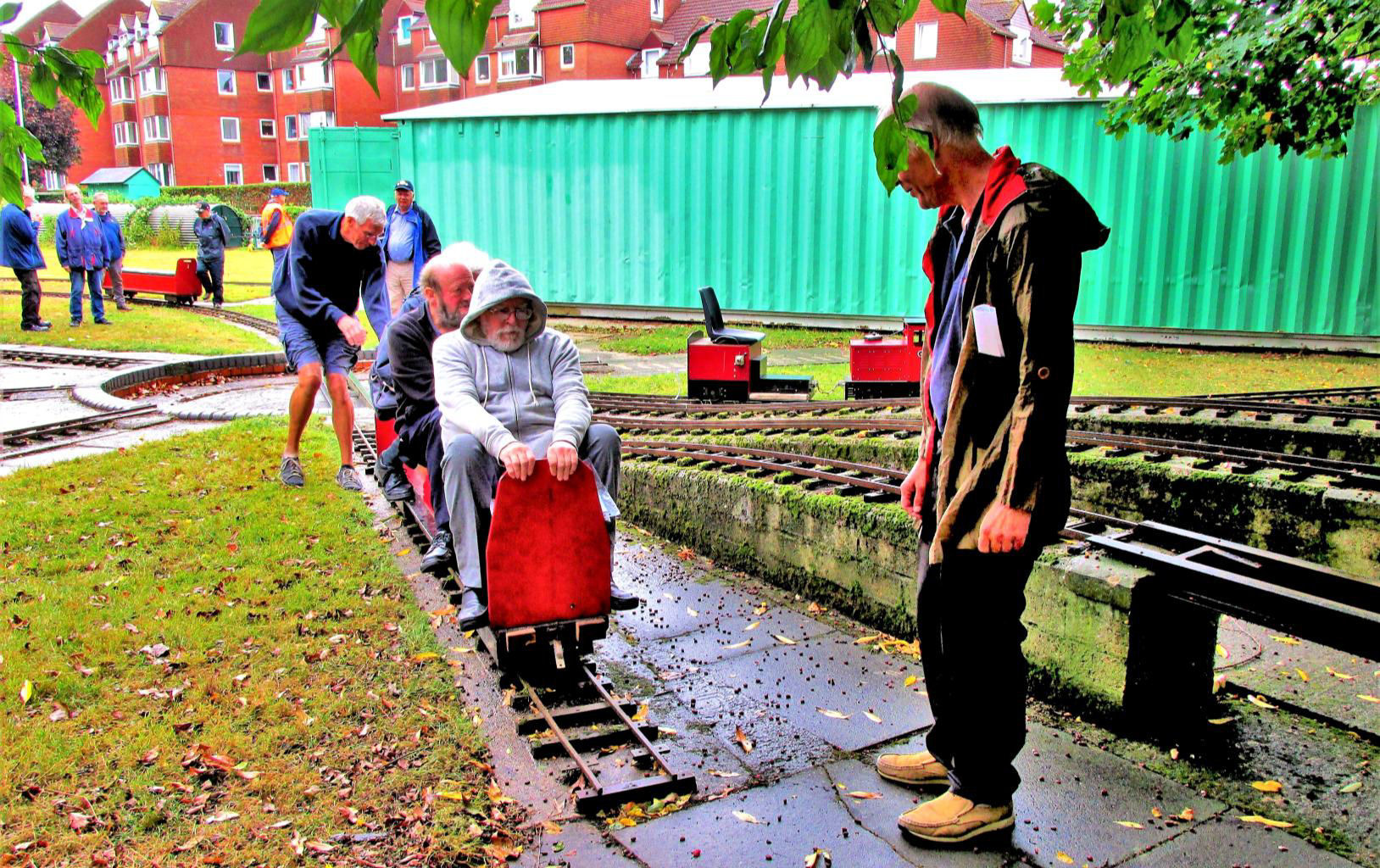 The turntable road and steaming bay coverage exercise begin. Your BLN Editor is quite happy to be pushed around!
[© Simon Mortimer 2019] 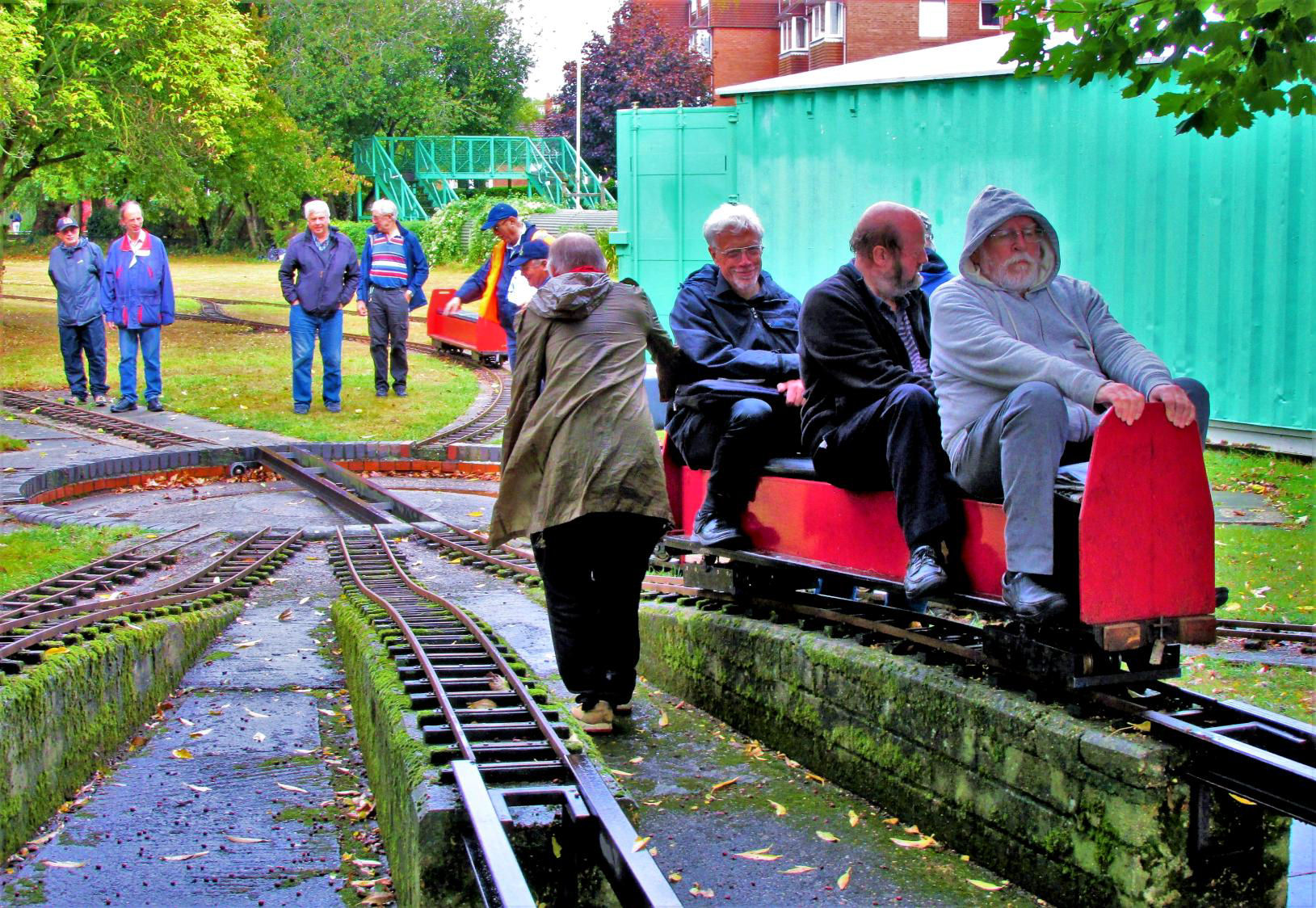 The station footbridge is in the background.
[© Simon Mortimer 2019] 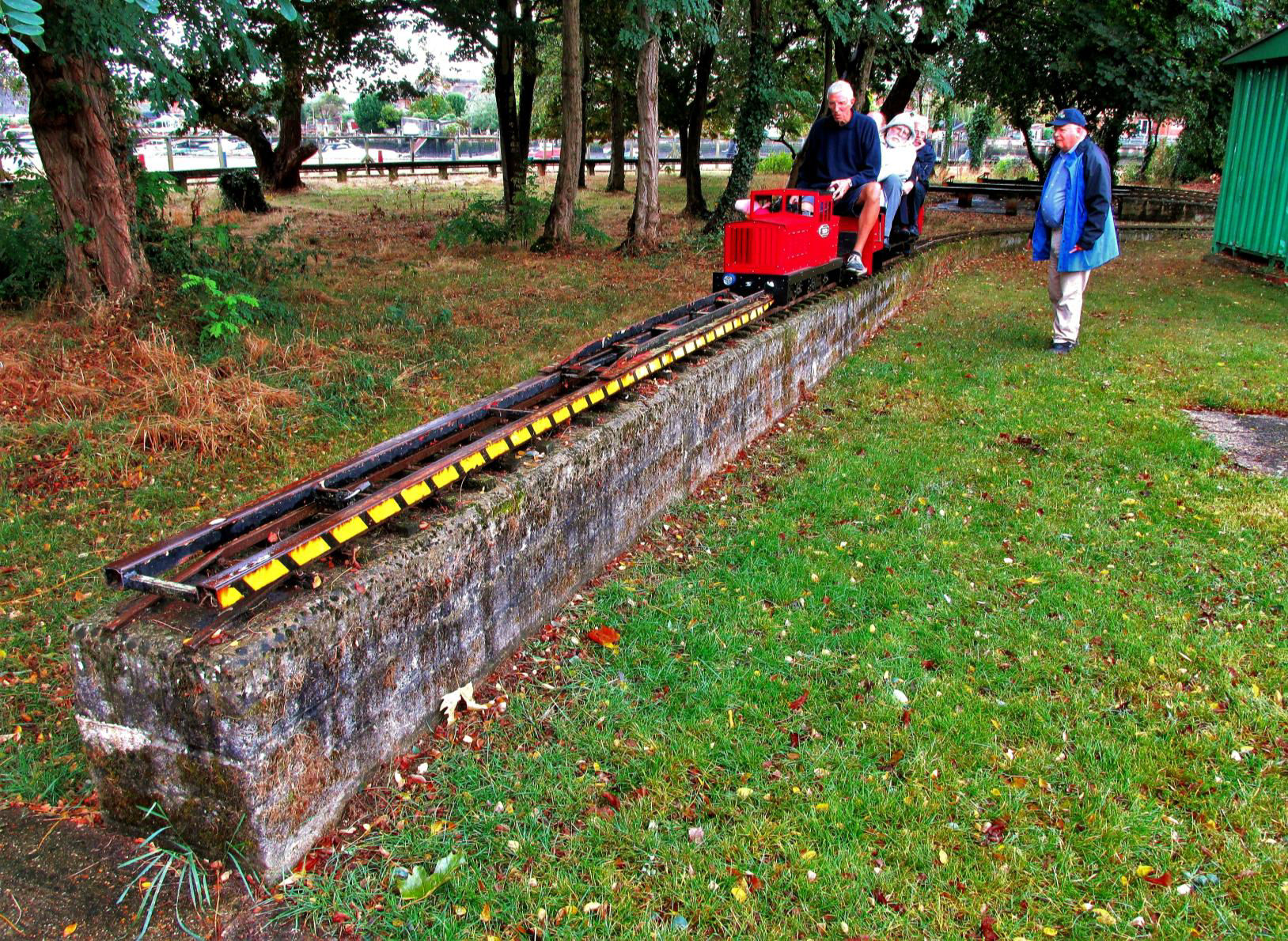 The Car Park loading line was traversed to limit of the extendable bridge section...
[© Simon Mortimer 2019] 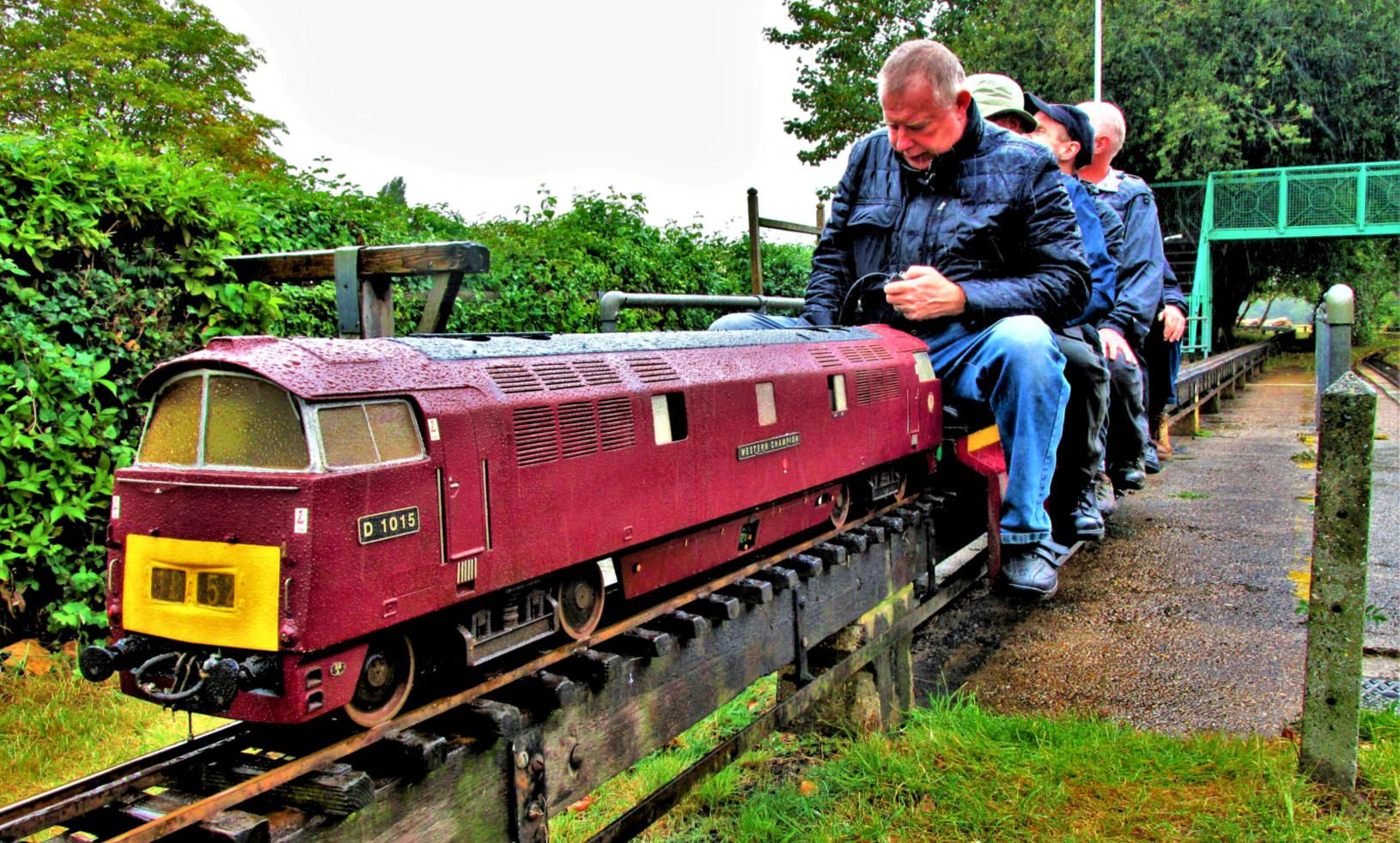 Ready to depart from the station for two circuits of the 5" gauge elevated line.
[© Simon Mortimer 2019] 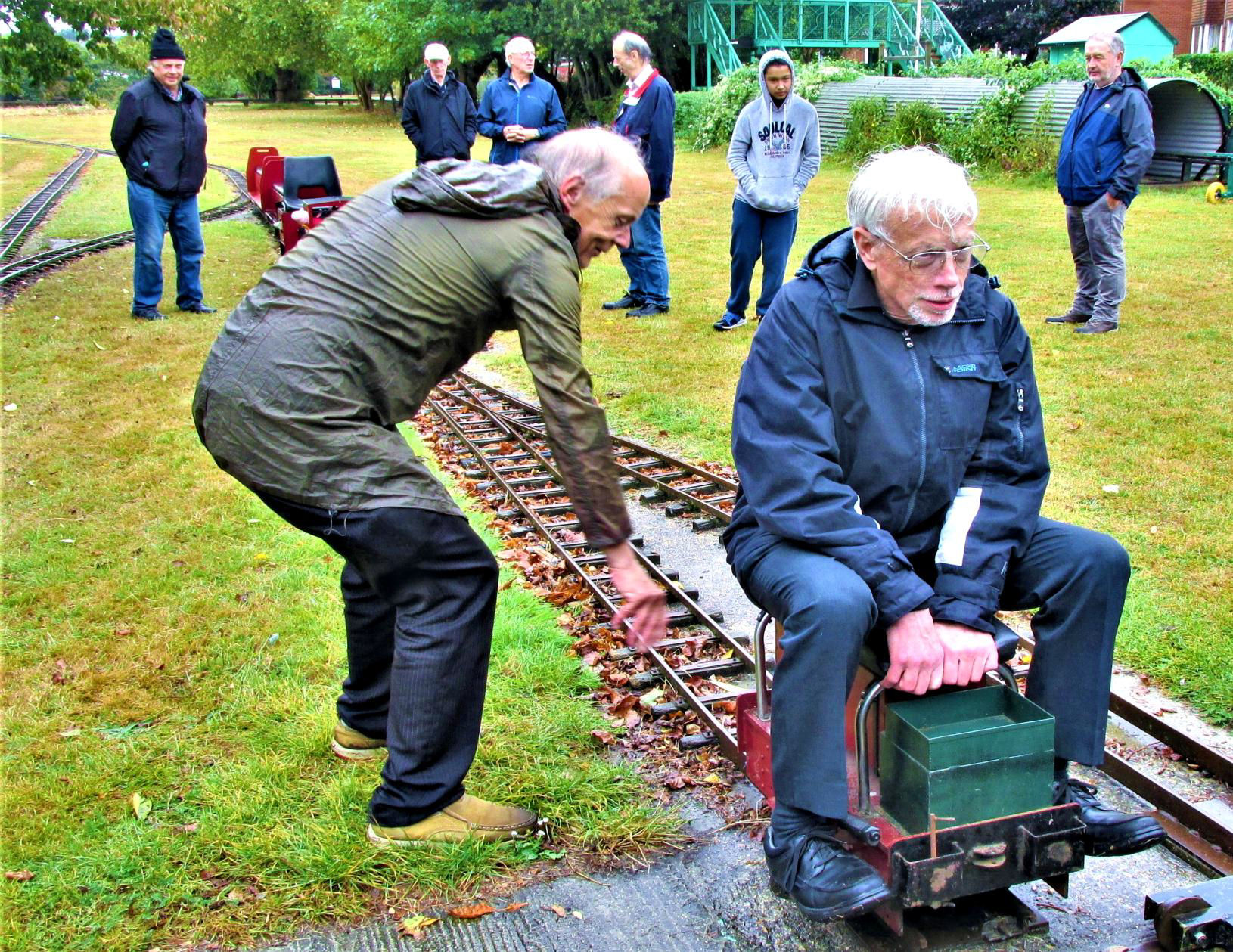 'People Power' and a Gricycle made for one - perfect for finishing those awkward little bits off. Top right is the elevated line shed with the station and footbridge behind.
[© Simon Mortimer 2019] 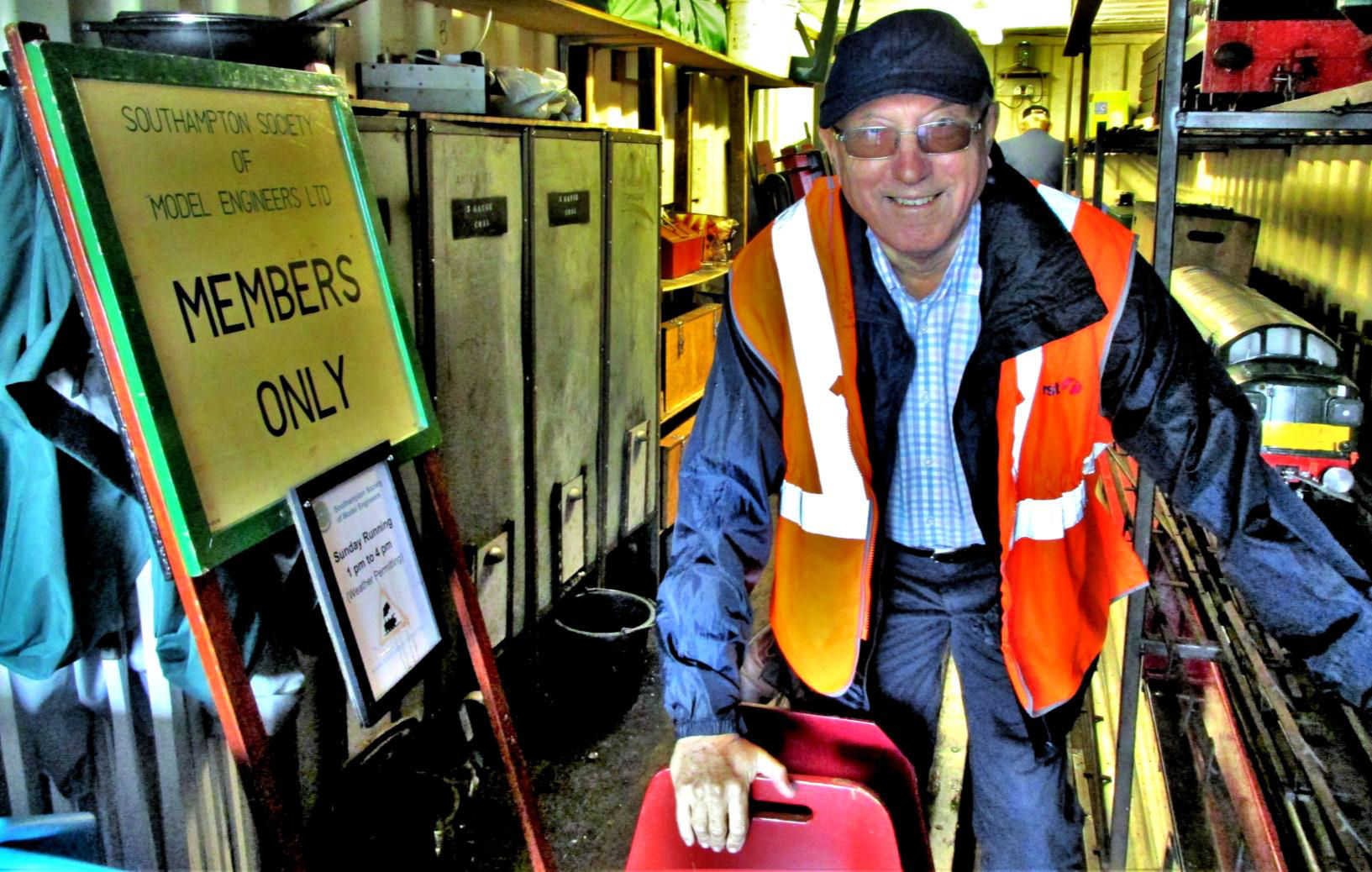 BLS obstacle course - you need to be fit to go on a Society Minor Railway visit… Our organiser, Bill Davis, clambers out over the train in the shed after sitting at the rear on the final move in.
[© Simon Mortimer 2019] 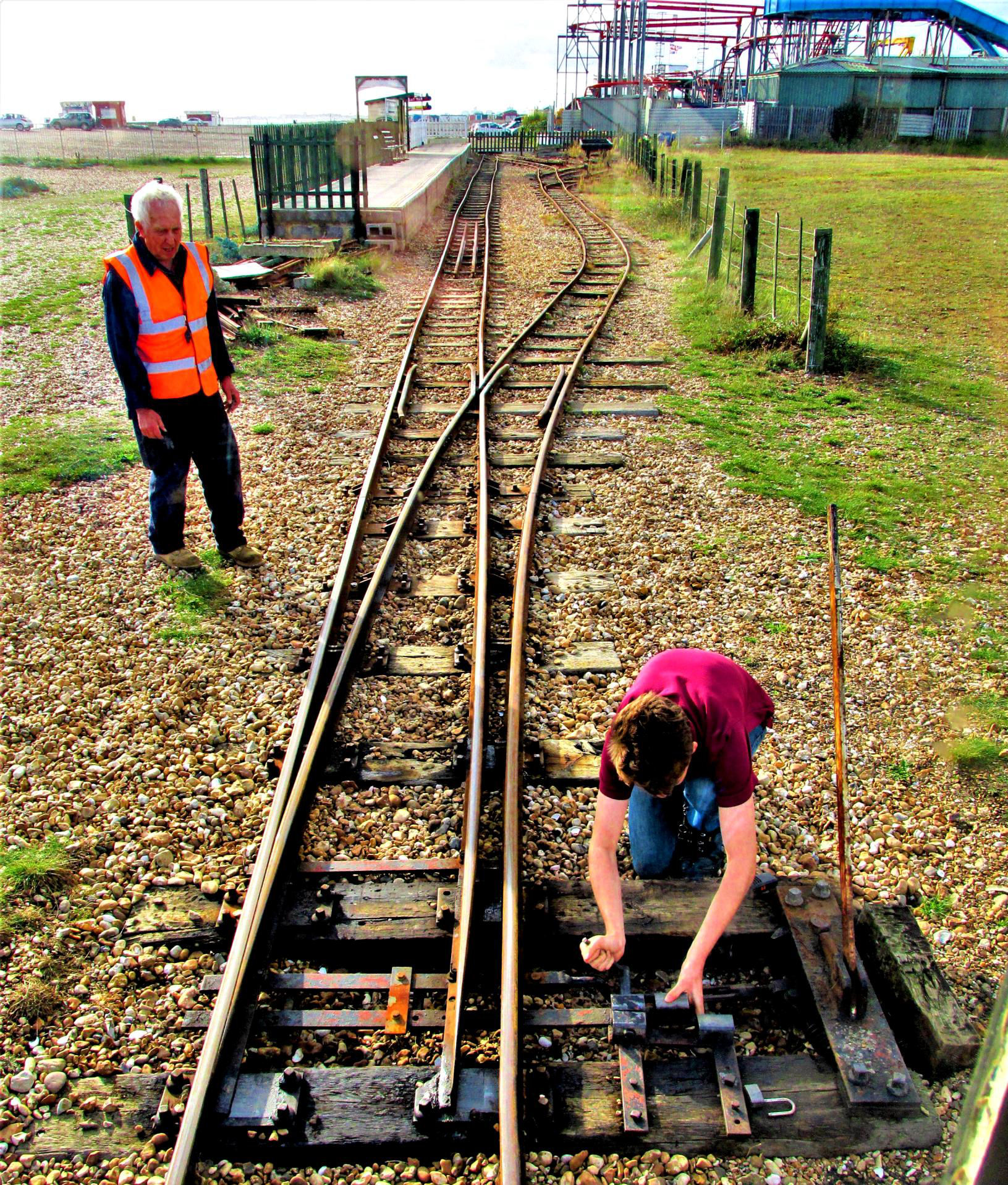 Hayling Railway the curtailed western end Beachlands station which used to be a bit further on. The points are set and locked for the run round loop. The lines off right once went to the shed etc.
[© Simon Mortimer 2019] 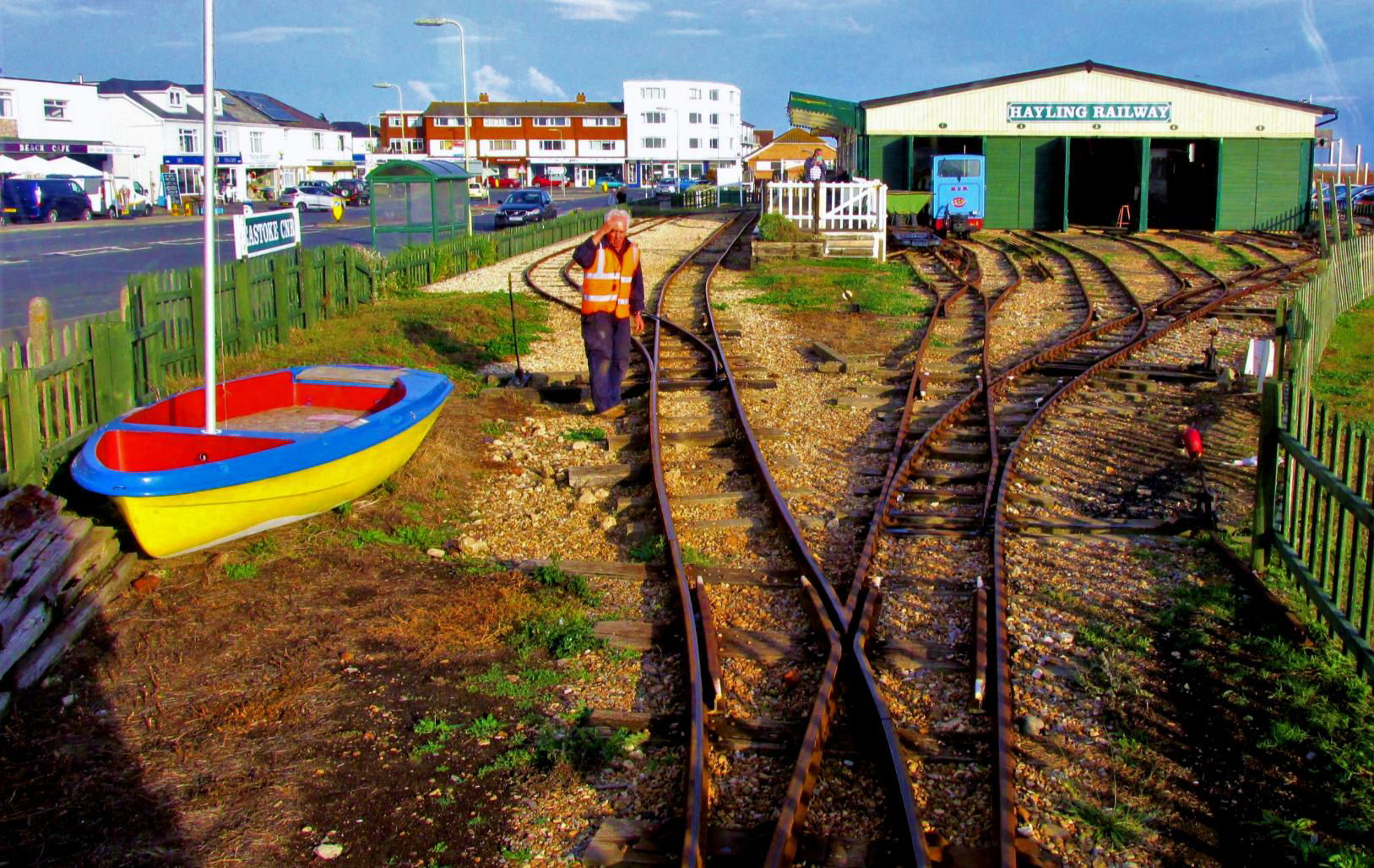 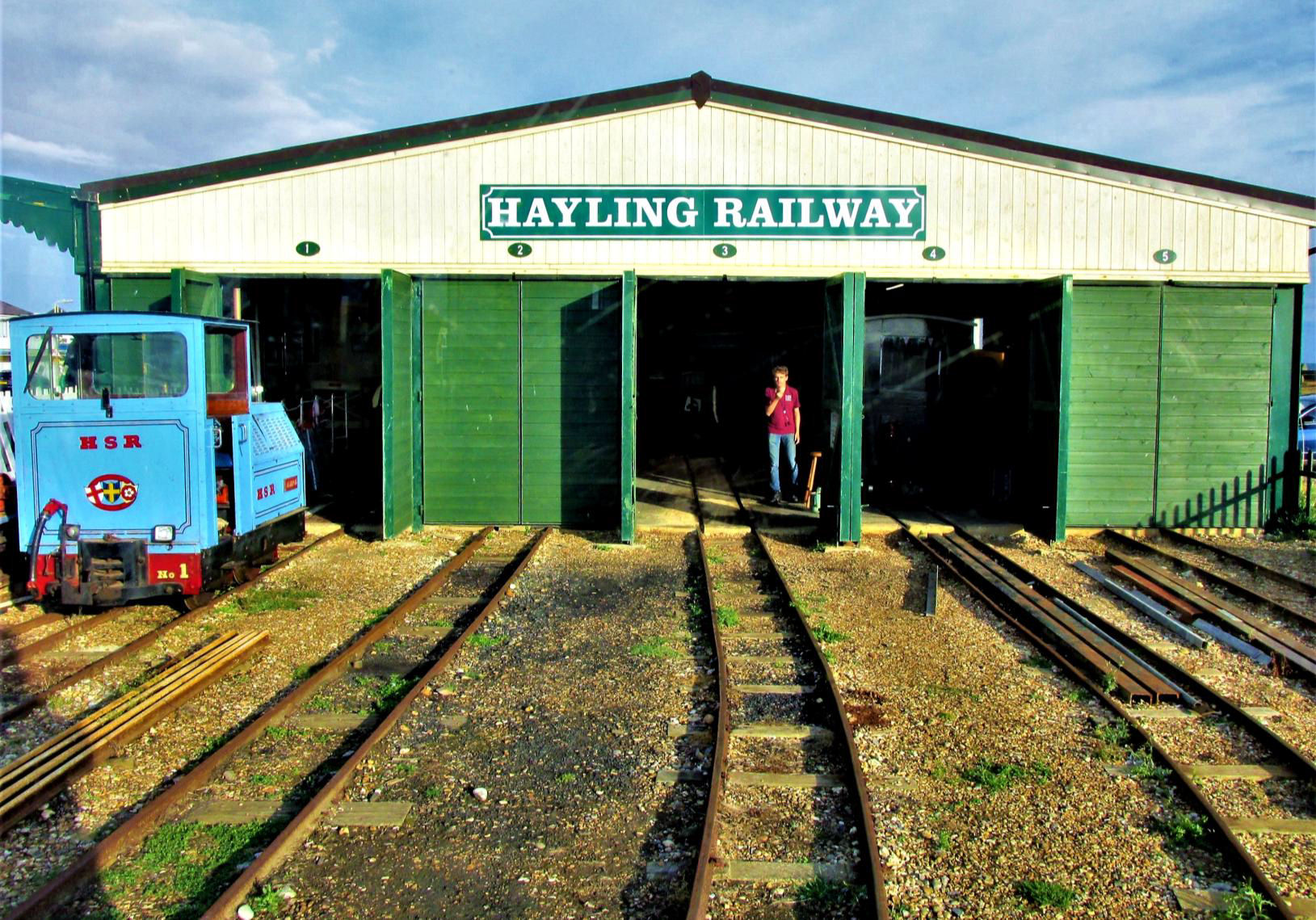 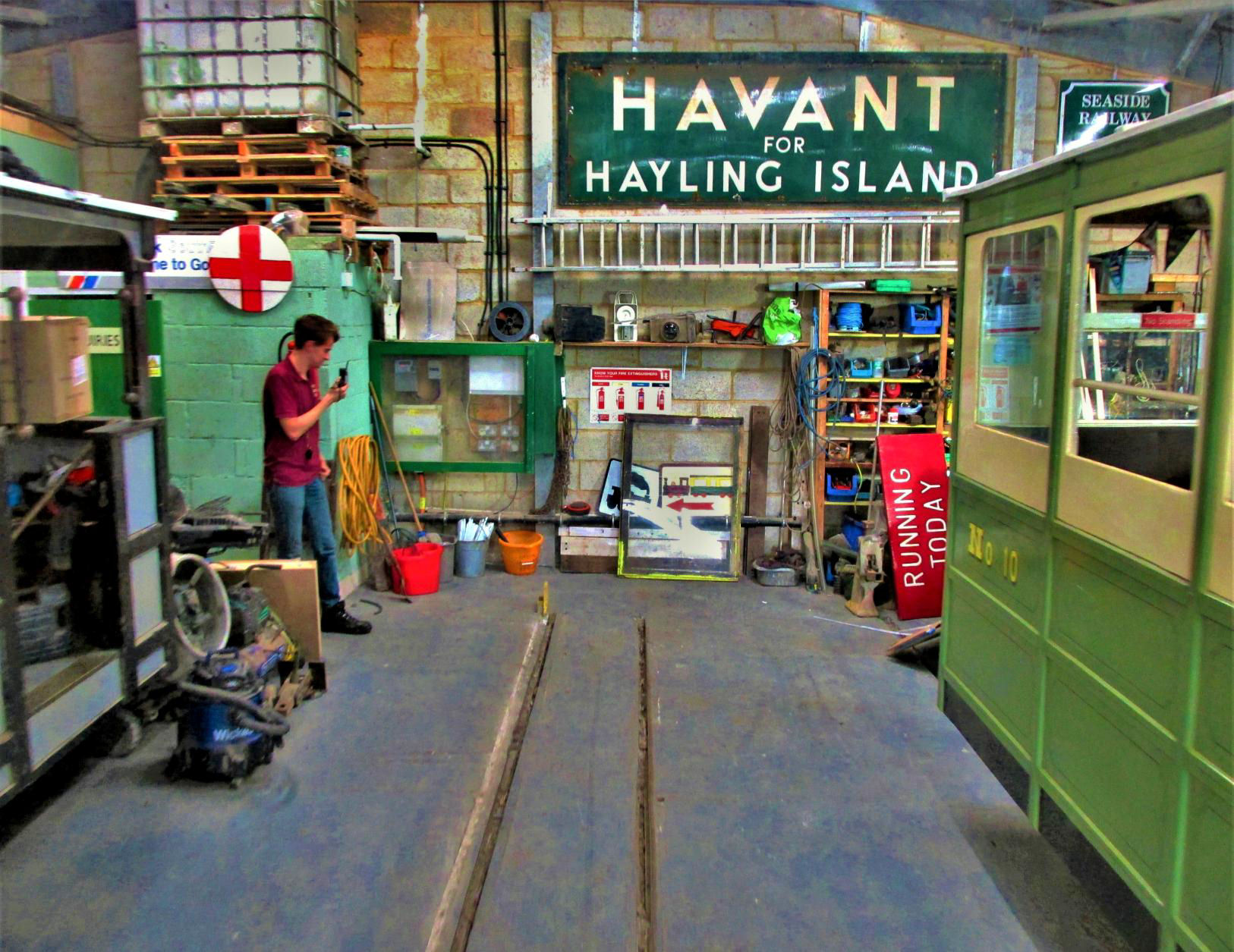 THE END! No historic running in boards were damaged in the course of reaching the end of line.
[© Simon Mortimer 2019]