Another Friday evening post 19.00 departure for your intrepid correspondent found me at Banbury awaiting a southbound CrossCountry train. A 15 minute battle with a new Chiltern Ticket Machine trying to extract an Open Return to Southampton Airport Parkway resulted in eventual success but not until I had given it a frustrated thump which temporarily 'killed' it for a few seconds!

I made my way to the platform for the train. Fortunately, in view of what had just happened it was about 20min late, running behind a Chiltern train to Marylebone. At the last minute it was switched to P1 and arrived as the Class 168 DMU was leaving, illustrating the flexibility of the new Banbury layout. My CrossCountry train then used the trailing crossover beside the Chiltern Depot to regain the Up line.

After an uneventful journey and a night in a convenient hotel next to the station, it was time to concentrate on why I was here. I joined a resuscitated Class 442 SWR EMU (all since temporarily withdrawn due to interference with signalling) at Southampton Parkway for the short journey to St Denys to change. This is a rather rundown and unkempt station which could do with a little TLC. The Southampton to Portsmouth & Southsea all stations stopper soon arrived to take me to Bursledon. From here it was a 20 min walk to the 'back' entrance of Bursledon Brickworks Museum as directed by the joining instructions. All 18 participants were in place at the appointed hour and so we began. 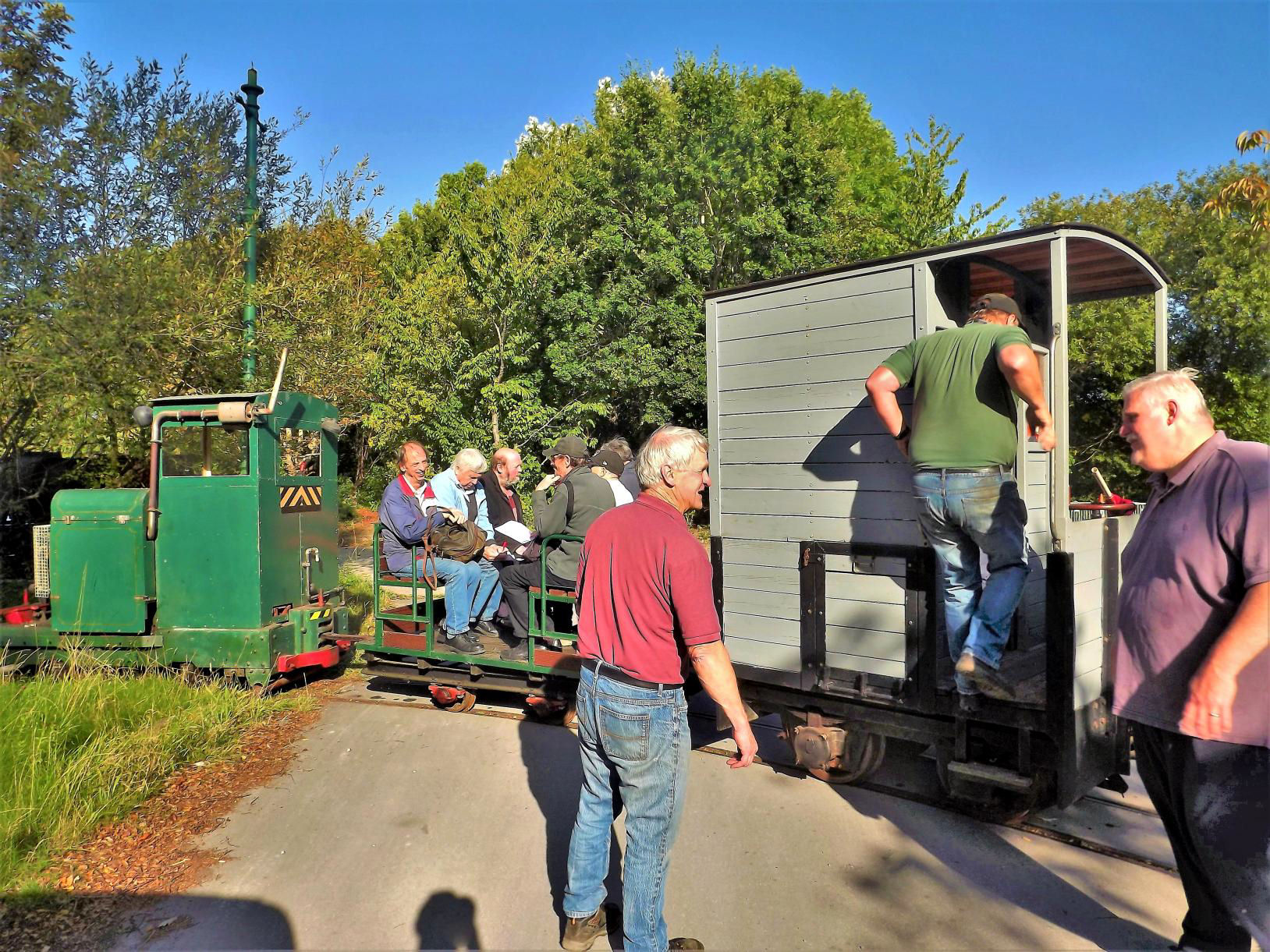 A bright sunny morning at Bursledon Brickworks Museum. The second half of our group has boarded the train at the level crossing on the Mineral Railway for the tour. Our 'outgoing' Membership secretary, Alan Welsh, is furthest from camera in the trio to the left.
[© Duncan Finch 2019]

The 2ft gauge Light Railway (public run 400yd) was first up, with Simplex Ashby No8694 hauling a brake van and a riding wagon, capacity about 10 in total so 2 trips were needed. Starting from the level crossing at the far end of the line from the public entrance (on the Mineral Line which is unsuitable for public use; that's how we like it!) we traversed the lines into all three separate Loco/Wagon sheds - each formed by a dark green painted container - as far as possible. Then a lengthy uphill section to the junction with the 'normal' passenger line. A bit further on we encountered stop blocks; the line has been cut back here compared with our maps, the partly dismantled headshunt used to almost reach the public 'front' entrance to the museum. Paperwork suitably annotated, after a reversal, we proceeded onto the normal run round to and past 'Kiln Halt' to the end of the Line at 'Woodside Halt'. The platform here is unusual (unique?), a flatbed wagon mounted and fixed on a Multi-Wheeled Bogie sitting on a section of isolated track placed alongside the line! No one had seen anything like it before. 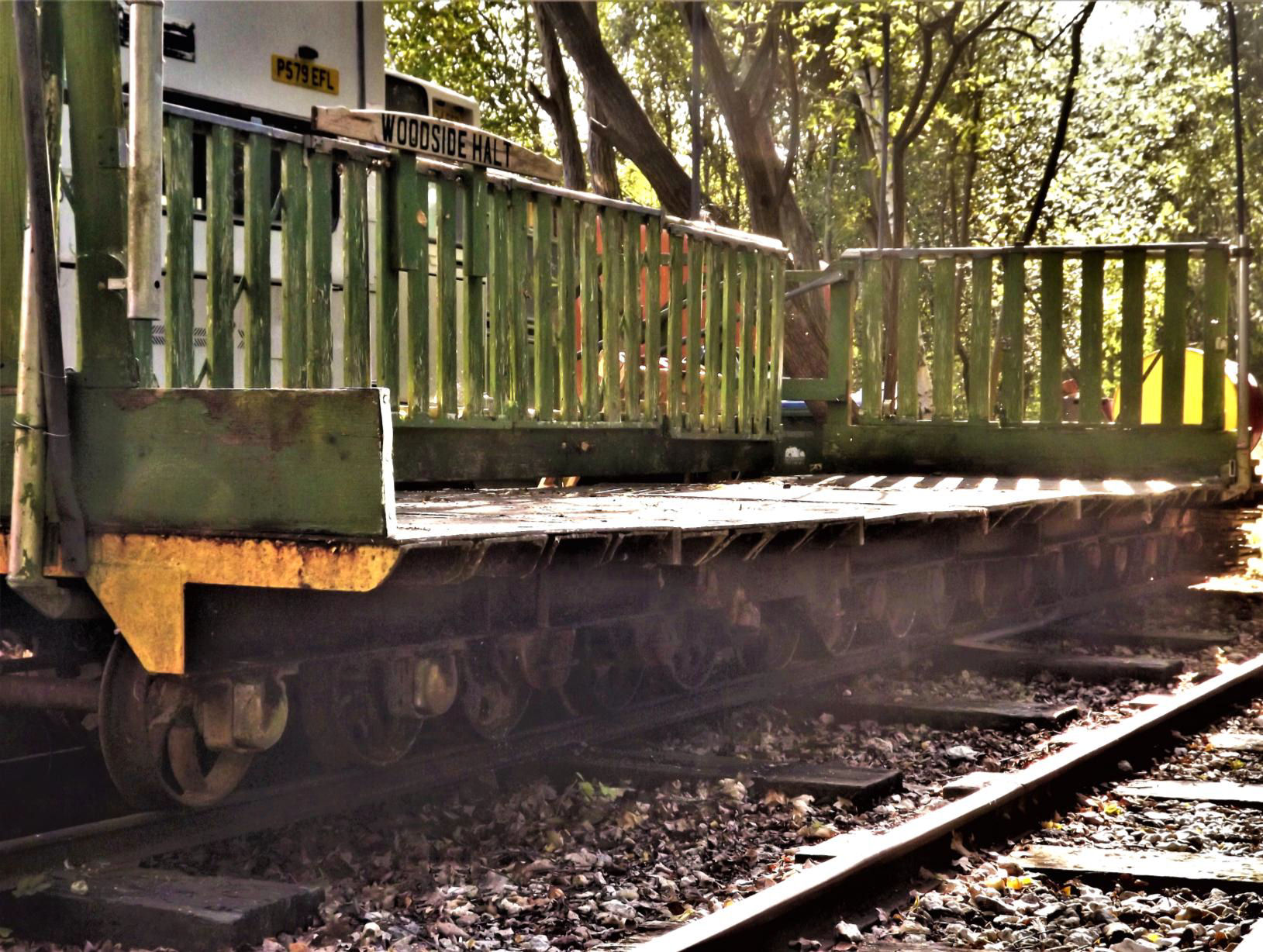 The most peculiar 'Woodside Halt', terminus of the narrow gauge public run and, despite appearances, it doesn't move (it didn't!)
[© Duncan Finch 2019]

We returned to the nearby shed and traversed the headshunt and one of the carriage shed roads before returning towards the entrance. En route we encountered a team of dog trainers and their canine chums being put through their paces in the glorious sunshine (apparently why we were unable to use the main entrance, as well as the site not being open to the public). Two more pieces of track were covered on the way back; part of a short siding on the 'Mineral Line' as far as stabled stock, then by crossing the level crossing where we had joined and going up to the turntable at the end of line. 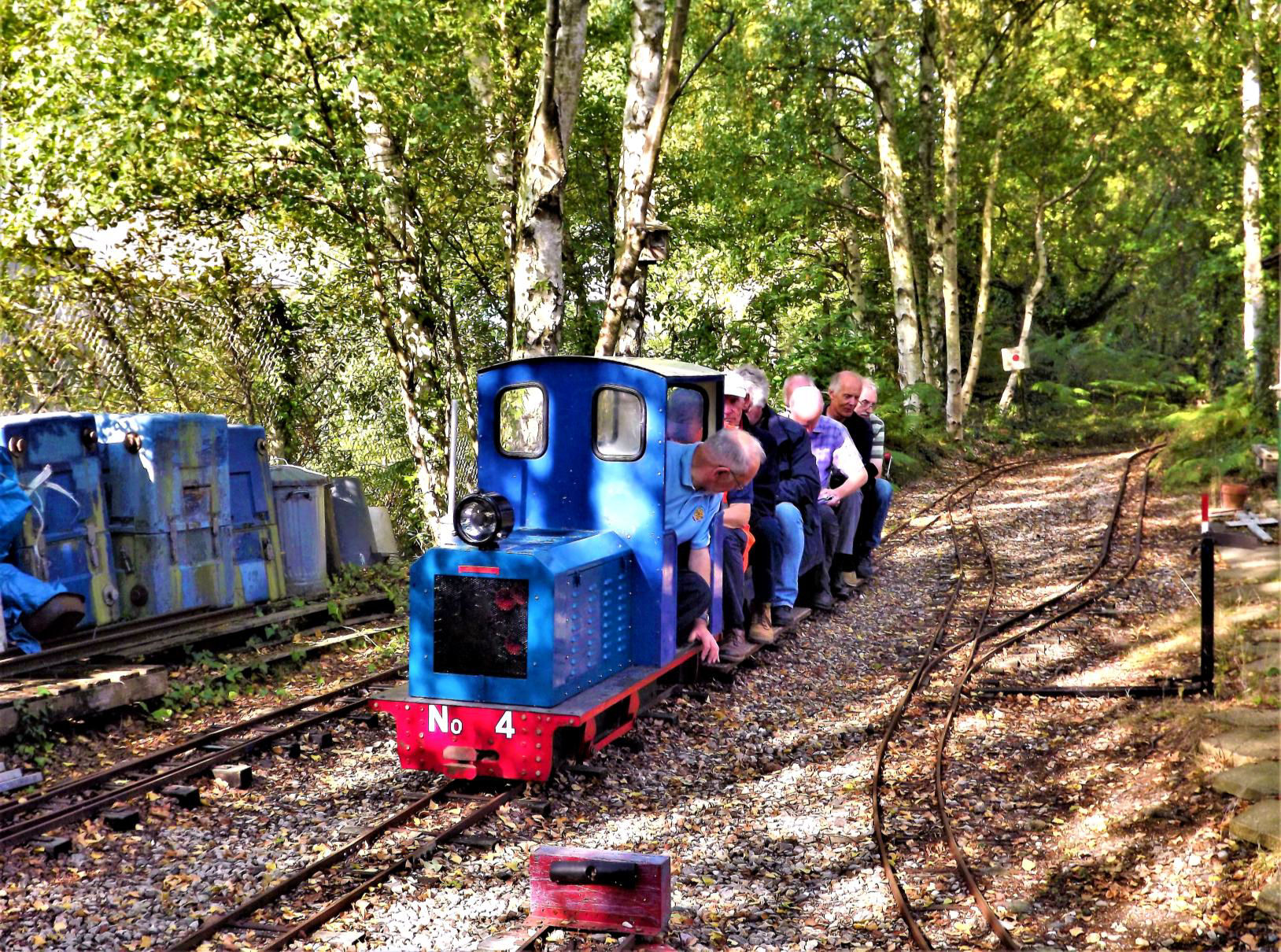 Bursledon Brickworks Museum Miniature Railway. Setting back on the shed (off left) line. Right of the train is the main passenger running line; far right is a high level siding that was traversed.
[© Duncan Finch 2019]

The other group joined for their narrow gauge trip while we miniature men made our way to the 7¼" gauge railway (public run 210yd). Here blue liveried 0-4-0 No2 was waiting with two sit astride coaches. Three trips ran, each for six members. This line runs around one side of the Museum building, the former brickworks (well worth a visit). After the obligatory shunt moves to cover the run round loop and headshunt (up to the turntable), we ran along the 'P' shaped line round to the shed area where we were able to cover one siding and one road as far as the broad gauge Traverser. There was then time for people to cover any bits they had missed and, in some cases, indulge in a bit of rubber tired action courtesy of the local Bus Preservation Group who house vehicles on site! (You know who you are!)

Hot drinks and biscuits were available for a small donation. Very sadly after 22 years of operating, both lines close at the end of this season and have to be lifted and cleared by February. The Hampshire Narrow Gauge Trust is disbanding and most of the narrow gauge stock is going to Statfold Barn. The last narrow gauge public running was 27 Oct although the miniature only may run on Sun 24 Nov.

The next location for our merry band was about 15 miles away. Our organiser Bill Davis had arranged a 25% discounted Group Rate Admission (minimum 12 people) to Marwell Zoo, home to the Marwell Wildlife Railway. Once inside the Zoo, it is another £2.50 per trip to travel on the train, which you pay at the gift shop (cash) or on the train (card only!). The Railway is a 15" gauge 900yd simple circuit with a short shed line and takes around 15 minutes to traverse at slow speed. It does afford views of some of the animal enclosures. Penguin station is the main one by the entrance, with a disused Rhino Halt halfway along and Encounter Village, again disused, on the return loop at the far end. The loco is the sole power here, 'Princess Anne', a steam outline 2-6-0 dating from 1987. 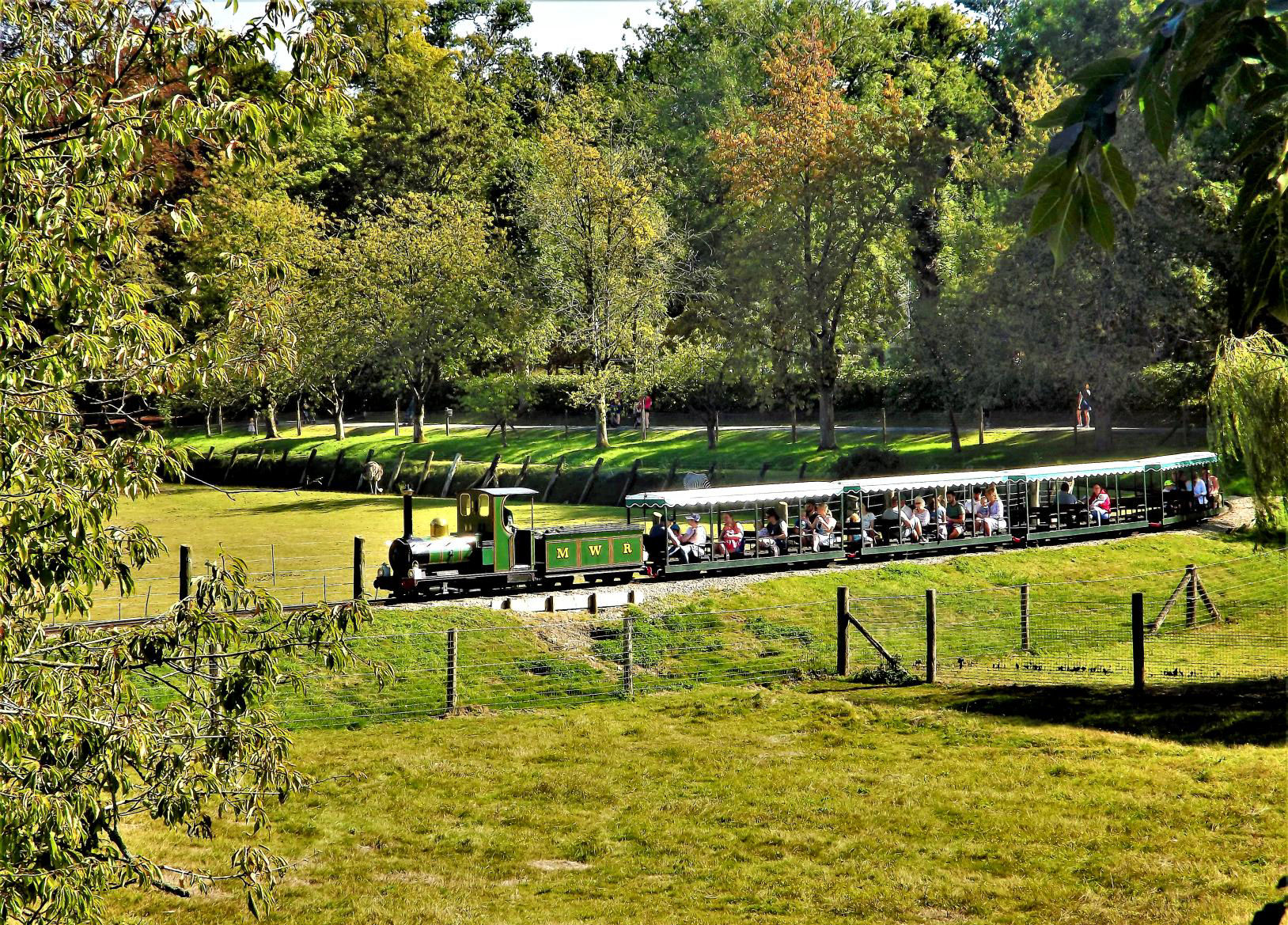 The only other track is to the shed adjacent to Rhino Halt. Most participants were on the first available trip which missed overlap by a good 18", but the members with higher standards (with one who arrived late) achieved it on the following run. There was then time to look around the Zoo, find lunch and/or see an exhibition of spectacular animal paintings and meet the artist (for sale for those with up to £24,000 to spare - although some were not priced, you had to ask). Mr Adlam may care to note that a brand new free road train was running round the zoo (and yes some of us did indeed do it).

The third location was close by, the most unusual Bankside Miniature Railway, (although sounding like a former power station in London it was actually on the bank of the River Itchen) by Brambridge Park Garden Centre. It is not well signposted and the entrance is not obvious. This was brought home to us when we saw a buzzer/bell near the ticket office 'Please ring for a ride'! implying that they have their quiet periods! The public run is an exhilarating 330yd balloon loop of 8¼" gauge (unique in the UK?) on trestles and incorporates an (also unique?) 35ft turntable on which the whole train is turned (ECS) between runs. This is because the loco (Steam 815 Carolyn, a 1924 built 2-6-2) and its coaches are permanently coupled. Rides were given to/from both platforms. Although not a monorail it is very Lartigue-like and reminiscent of the Listowel & Ballybunion Railway.

There is also a 7¼" gauge ground level line here. When visited by your GS and Editor a few weeks earlier to help negotiate our Society visit it was overgrown, had clearly not been used for some time and there was no operational 7¼" gauge loco on site. What a contrast to our visit! In that time the volunteers had completely devegetated and refettled the 100yd line to passenger carrying standards and had two locos in steam, brought over from Eastleigh Lakeside their 'sister' railway especially for us! So 'Black 5' No45440 & GWR 1103 gave rides covering both 'platform' roads and to the end of line (where we were observed by a selection of religious avians in the Garden Centre Bird of Prey section). 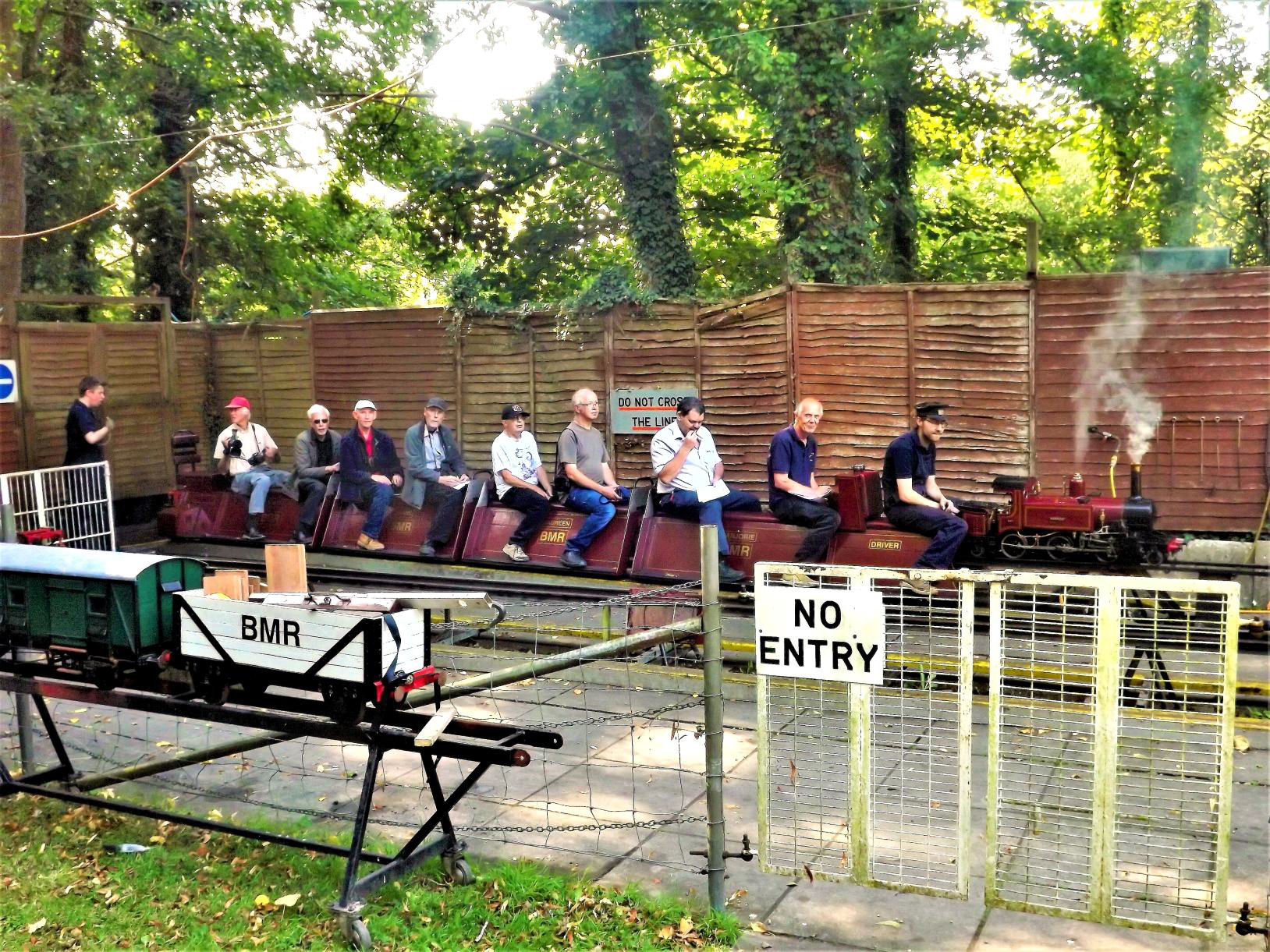 Bankside Miniature Railway; the 8 ½" gauge elevated trestle railway. At the rear Andy Main (who is giving a presentation of his Minor Railway films at our AGM) has his equipment ready.
[© Duncan Finch 2019]

After this it was on to our final location of the day close by, the 1¼ mile complex Eastleigh Lakeside Railway with 7¼/10¼" gauge. Here Bill had arranged an 'all lines' tour but we had to wait until after the last public service had arrived back, around 17.00. Our steed was 4-6-2 No1002 'The Empress' of 1933. Once all were aboard, and after the briefing on the plan of action, we set off from Eastleigh Parkway bay P1. This started with a set back - but actually a positive move - to the buffer stops.

A normal return run to Monks Brook Halt was followed by Eastleigh Parkway usual P2 then the South Level Crossing facing and trailing crossovers. At Monks Brook, to allow bidirectional running through the platform, there is a long scissors crossover and these were covered pretty 'sharply' (at one point we accidentally left our Guard behind!). Parkway platform avoider was covered as were all crossovers and running line connections, some bidirectionally. All this took 45 min, facilitated efficiently and expertly by our jovial and friendly Driver and Guard who were surprised that it 'only' took this long!

After this our members enjoyed a generous buffet in the station café, a fitting end to a great day. A big thank you to all the very friendly volunteers (and staff) at the four locations (seven railways) for their hospitality and understanding, going beyond the call of duty although under no obligation to do so. Thanks to Bill Davis for his excellent organisation (where next year, Bill?) and my personal thanks to Paul Stewart for giving myself and Keith Harrison lifts. Also to the Weather Gods for the perfect day! 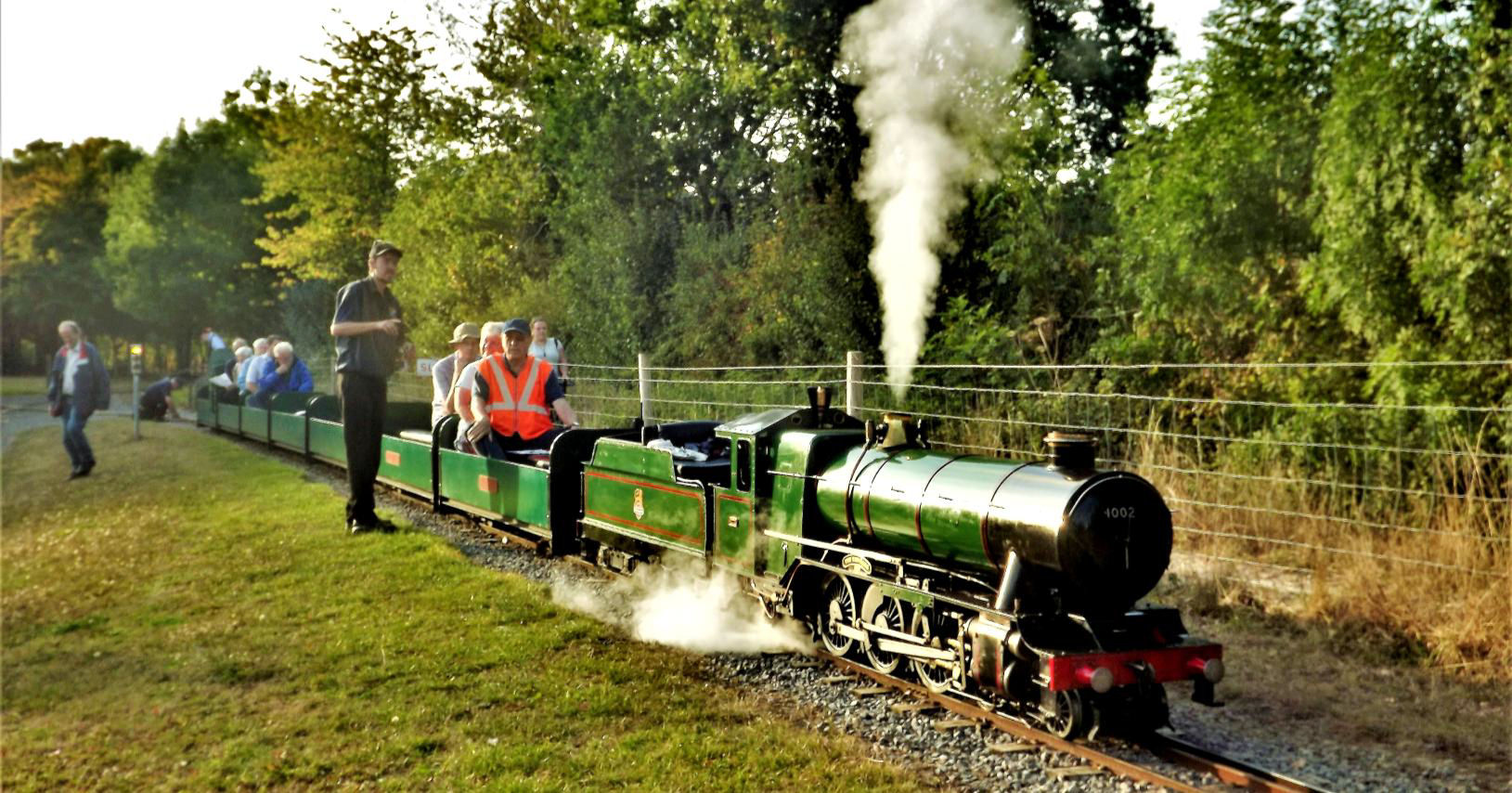 Eastleigh Lakeside Railway, a photo stop in the evening sun just after completing Monks Brook station scissors crossover (left of the signal at the rear off the train). Our 'esteamed' organiser of this excellent weekend, member Bill Davis keeps a low profile (he is the one in a high viz vest.)
[© Duncan Finch 2019]