In a slight change of plan, I boarded this tour at Dorridge instead of Solihull as the car parking is free at weekends. Although it left Solihull four minutes late, the tour, 'top & tailed by' immaculate 20189 in British Rail Blue & 20142 in London Transport Red, had seven minutes here so departure was on time from P3 (the Up & Down Dorridge Passenger Loop, recently remodelled at the south end) with the rarer trailing crossover at Dorridge South Jn. After reversing direction in Warwick P2, on departure we did the trailing crossover at the foot of Hatton Bank (108m 15ch) for the first of two times on this railtour, just north of the station, and returned to Dorridge. 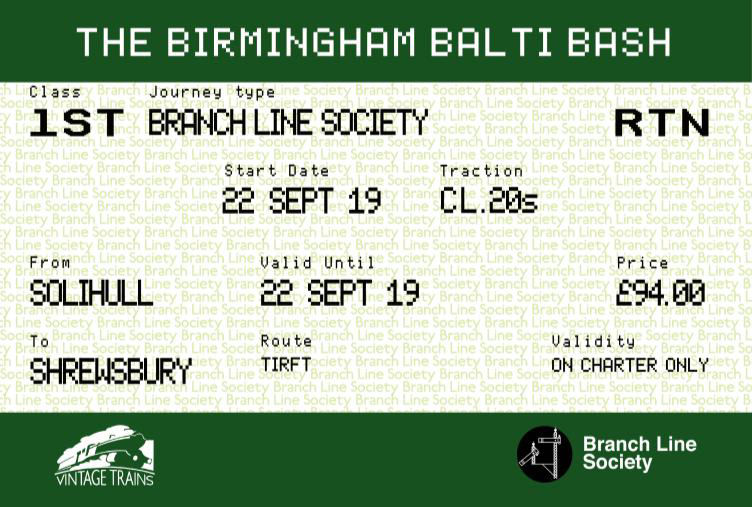 This was via the Down Hatton Goods Loop, picking up at Hatton P2. We were then the first passenger train to do the remodelled, extended and recommissioned (28 Jan 2019) Up & Down Dorridge Good Loop past Dorridge which is shown as out of use in the 2018 TRACKmaps 4 - quite correct at the time. This was not the only change to that publication, as we would see shortly.. 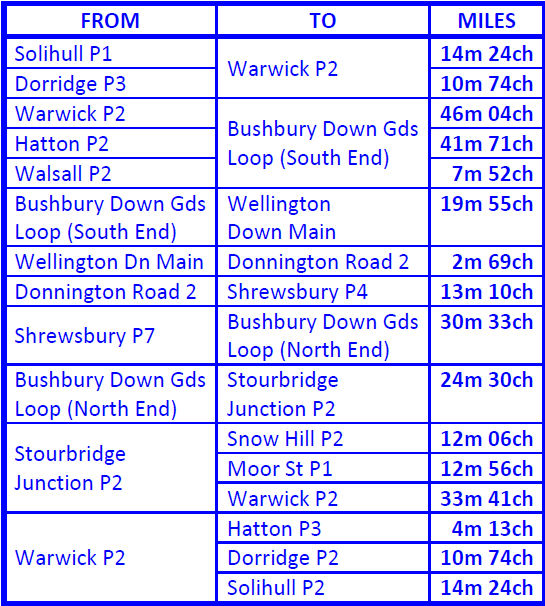 At Tyseley South Jn our tour took the relatively unusual link left to the Tyseley Down Through Siding, passing Tyseley Warwick Road station at Vintage Trains base on the left and the 16 West Midlands Railway (and CrossCountry) through sidings on the right. At Small Heath South Jn it was across to the Down Bordesley then through the Down Bordesley Goods Loop with its interesting looking sand drag - ultra rare track. Running via St Andrews Jn to Landor Street Jn (a link with no regular passenger services) the tour reached the Up Derby Goods then the Down Derby Goods in the Up direction.

There were no locos at Saltley (to the right) today - although they, particularly the Lickey banker, still stable at the junction end of the branch to European Metal Recycling, which dispatches scrap by rail. To the left there were a couple of Freightliner 66s at Lawley Street. The Down Saltley Goods Loop was next (in the Up direction, what else would we expect?) Then it was a real delight to cross the whole layout at Washwood Heath West Jn left to Washwood Heath Arrival/Departure line 1, (No2 is out of use) especially as this line is at a slightly higher level than the main Derby lines. Then, with thanks to DB Cargo and Tarmac, it was Washwood Heath Up Side No2 Road; there used to be 27 lines here but they have all been lifted recently except 1 & 2; 3 remains as a short dead end 'cripple siding' from the Derby end. The yard is earmarked as a HS2 ballast stockpile (if.....). At the Bromford Bridge Jn exit end there is a quite separate single track bridge over the River Tame at a lower level than the main line.

We passed the Jaguar Car Terminal (left) which sends long trains to Southampton Eastern Docks and has two dead end sidings with end loading ramps - the cars are driven onto covered secure wagons.

At Castle Bromwich Jn it was round to the Sutton Park Line. Walsall P2 arrival and departure was early, having picked up the one booked passenger, and we proceeded over a stretch of PSUL from Pleck Jn to Darlaston Jn, but instead of going to Wolverhampton, we continued along the Grand Junction line to Bushbury Down Goods Loop. A reversal there saw us take the Oxley Chord in the rusty direction (no regular booked traffic this way), followed by Oxley Viaduct and Oxley Down Goods Loop past, you've guessed it ... Oxley Depot. Pendolinos included 390001 with its appropriate black writing on a yellow background name plate 'Bee Together'. The 5mph Cosford Down Goods Loop was taken; it has a booked West Midlands ECS working SSuX for a TfW passenger service to overtake it.

The originally intended Ironbridge branch was out of use due to a severe bridge bash (see item 2601) discovered on a special inspection for our tour the previous week. Commendably, at short notice, an alternative branch had been provided. At Wellington, after reversing on the Down Main (through line), this was a trip to Telford International Freight Terminal, (Road 2). Rakes of Freightliner coal hoppers and flat wagons were in the adjacent sidings, with possibly further wagons beyond the A518 road bridge. I think this branch is far rarer than the Ironbridge branch so I know many people were very happy with the late notice change...

We returned via Wellington P2, then to Shrewsbury for a 90 minute break. Surely Shrewsbury must have the most eclectic mixture of signals on the network? Rotating signals, upper semaphores, lower semaphores and colour lights. I had never been out of the station there and a short wander up the hill revealed many historical buildings. These included the Council offices which began life as a school that includes Charles Darwin among its alumni, the castle with regimental museum and an old hospital now luxury flats to name but a few. A longer visit in the future, but not as part of a railtour, is called for. The ECS meanwhile sojourned in Castle Foregate Sidings, Third Line (now only the one!) before Coton Hill.

Back onboard it was through Wellington through line (Up) and down the lengthy Bushbury Down Goods Loop; this time almost the whole 56ch. Of course, the Up Goods Loops at Cosford (5mph) and Oxley were done on the way but I didn't see much of those as I was tucking into my curry, washed down appropriately with a bottle of Cobra. The curry, included in the fare, was 'Bhuna' on the menu which is officially 'medium hot' to 'hot' - perhaps this one was nearer the hot end! However, for a meal served on a train, it was very good quality and included the dips and proper metal cutlery!

Our second Bushbury Down Goods Loop reversal (with Bushbury Jn trailing crossover for the second time - does anyone want to swap the spare for something?) saw us through Bescot where, after the station, we took a left along the Up Bescot Goods Loop. 66141, or number 'Three', one of the recently named blue Maritime Intermodal Class 66s, was stabled. Then, we almost turned back on ourselves via Perry Barr North Jn, Perry Barr West Jn, Soho East Jn & Soho North Jn, but then turning left at Galton Jn to Smethwick Jn, joining the Snow Hill to Stourbridge Junction line. Here, two Chiltern loco hauled sets were stabled, with 68013 & 68014. A reversal in P2 took us through the Stourbridge Down Goods Loop and we stormed up Old Hill bank, 1:51 for over a mile and 1:45 at it steepest, eschewing Rowley Regis Up Goods Loop [it is out of use] in favour of the much more prized Up Rood End Goods Loop. It has been politely refused for other tours; recent tree pruning perhaps suggesting why.

Then it was time to start setting down with a call at Snow Hill - P2 via the facing crossover before and trailing after. However, they missed out on my reason for doing this tour - other than it being a good day out - after Moor Street P1, the Up & Down Small Heath Goods from128m 56ch to 126m 52ch.

This bidirectional line is used by ECS rather than 'Goods' and once on it we were obliged to then take the Tyseley Up Through Siding as the main lines cannot be regained (without reversing) until Tyseley South Jn. Although nearly the end on the tour, the fun was not over; we proceeded to Warwick to set down, then did the trailing crossover again and ran via the Down Hatton Goods Loop, this time to Hatton P3 (of course!). The relatively rare link the Down Dorridge and the Up Dorridge Passenger Loop (P3) followed for final set downs at Dorridge and Solihull, a few minutes early.

This was an excellent trip. Top performance from the heritage traction, which, given the rate at which we accelerated from stops suggested that both 20s powered most of the time, a comprehensive route around the West Midlands probably exercising all nooks and crannies of Vintage Trains' staff route knowledge (34 sections of rare track). There was a pleasant short break in the middle, within a few minutes of time all day, a very efficient service from both Vintage Trains and Society staff/stewards and covering all intended track. Big thanks to all who made it happen, particularly Kev Adlam and Vintage Trains, ticking every box for me. Our 230 participants raised an excellent £1,017.02 for Railway Children with locum Rafflers, Neil, Archie and Etty Lewis (you passed the trial - you have got the job!). 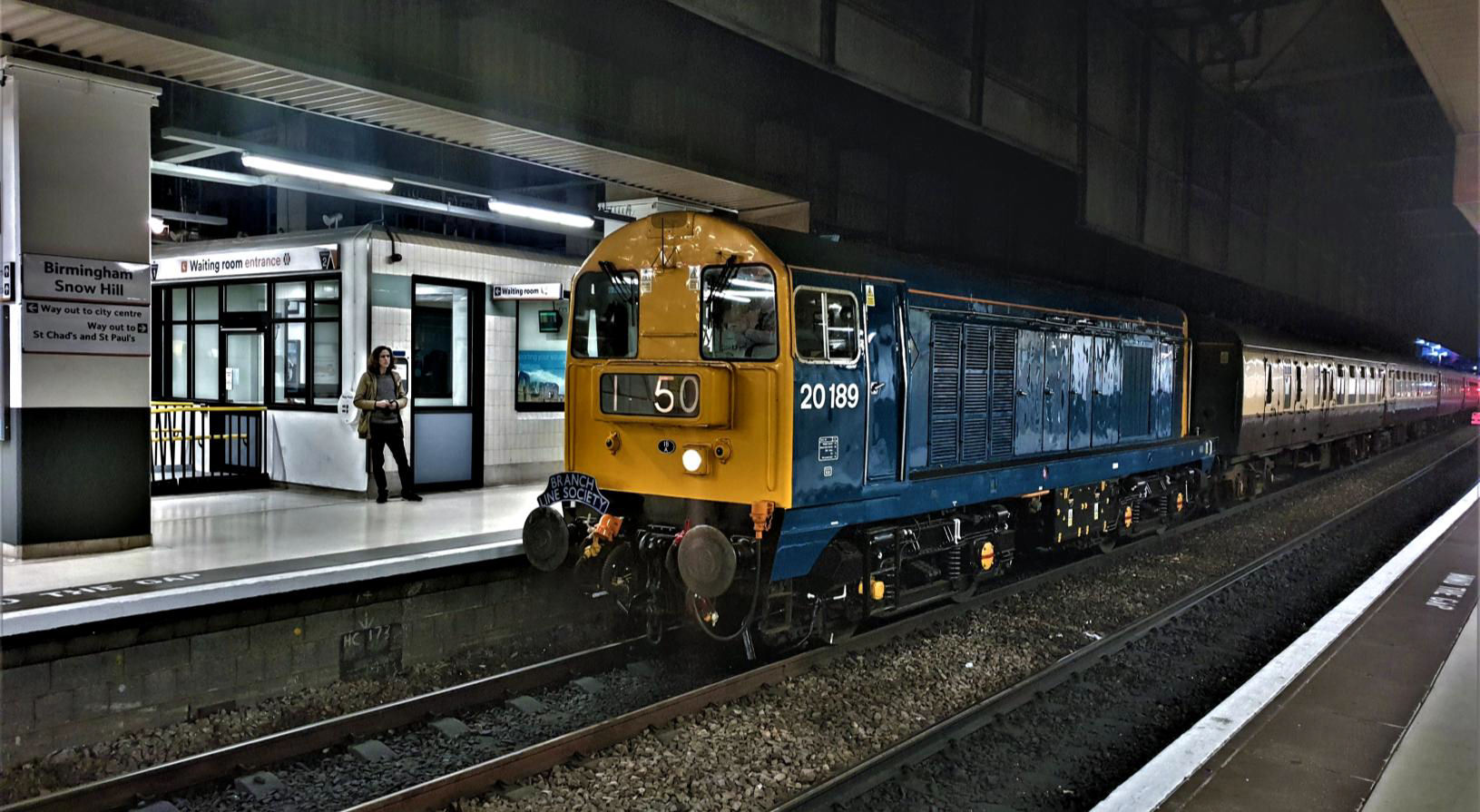 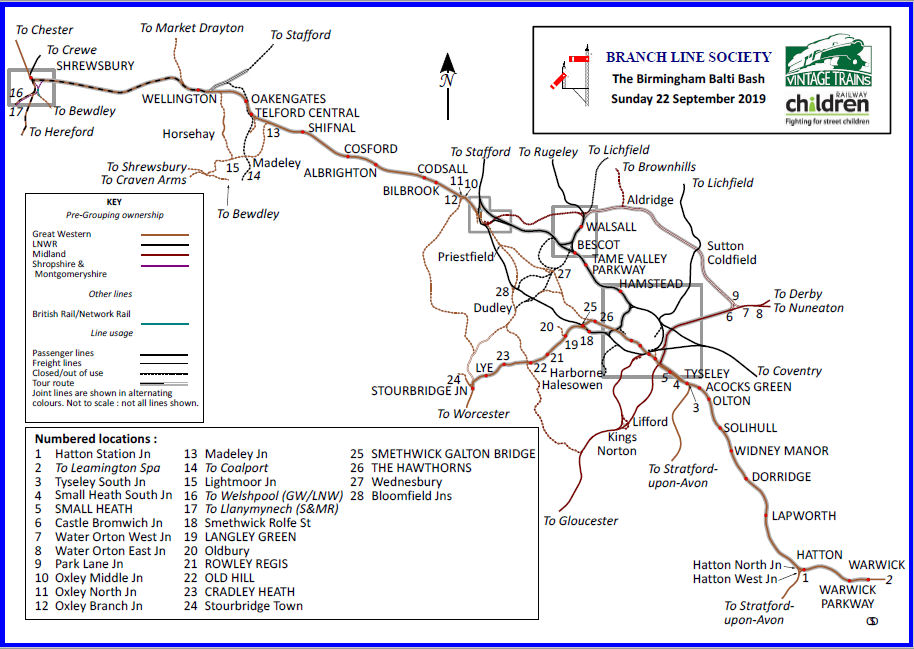 The Birmingham Balti Bash historical tour map 1, with thanks to Dave Cromarty. 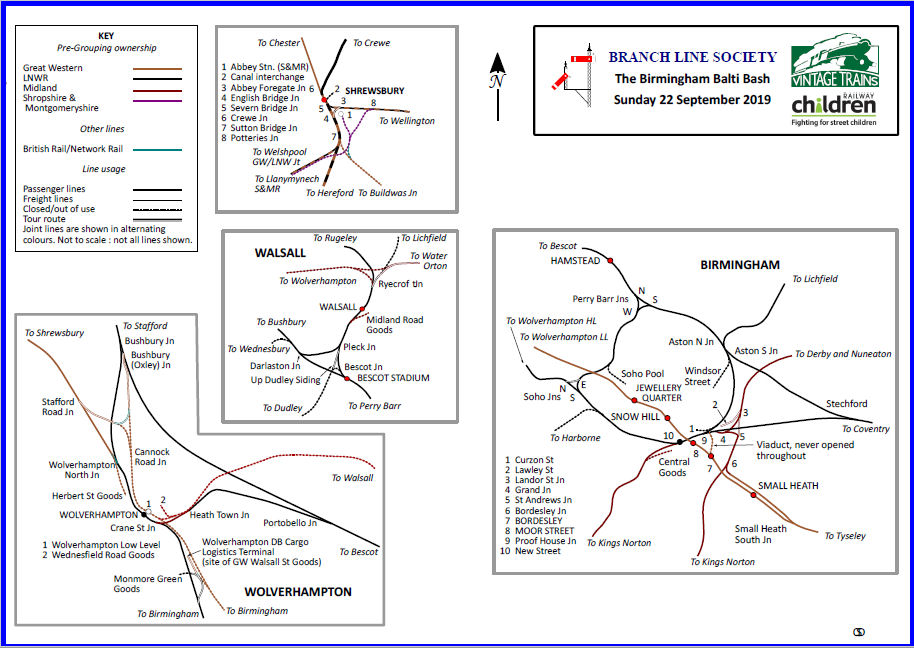 The Birmingham Balti Bash historical tour map 2, with thanks to Dave Cromarty. 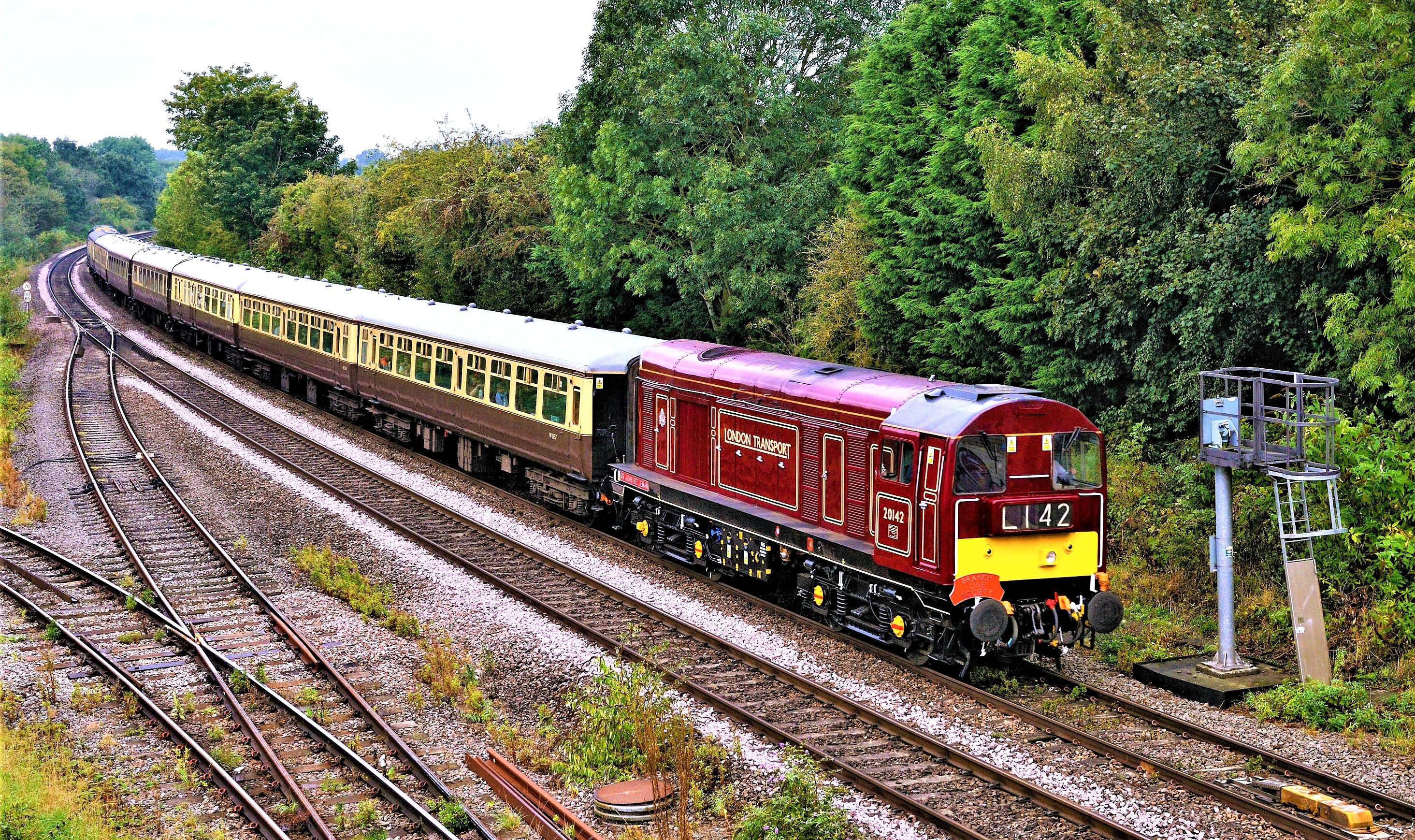 Heading south in the morning on the Up Dorridge Line at Hatton Station Jn, north of the station. The Stratford-upon-Avon line curves round to the left (bottom left corner) and the picture nicely shows the rare link on the left from it/Hatton P3 to the Down Dorridge middle left.
[© Peter Tandy 2019] 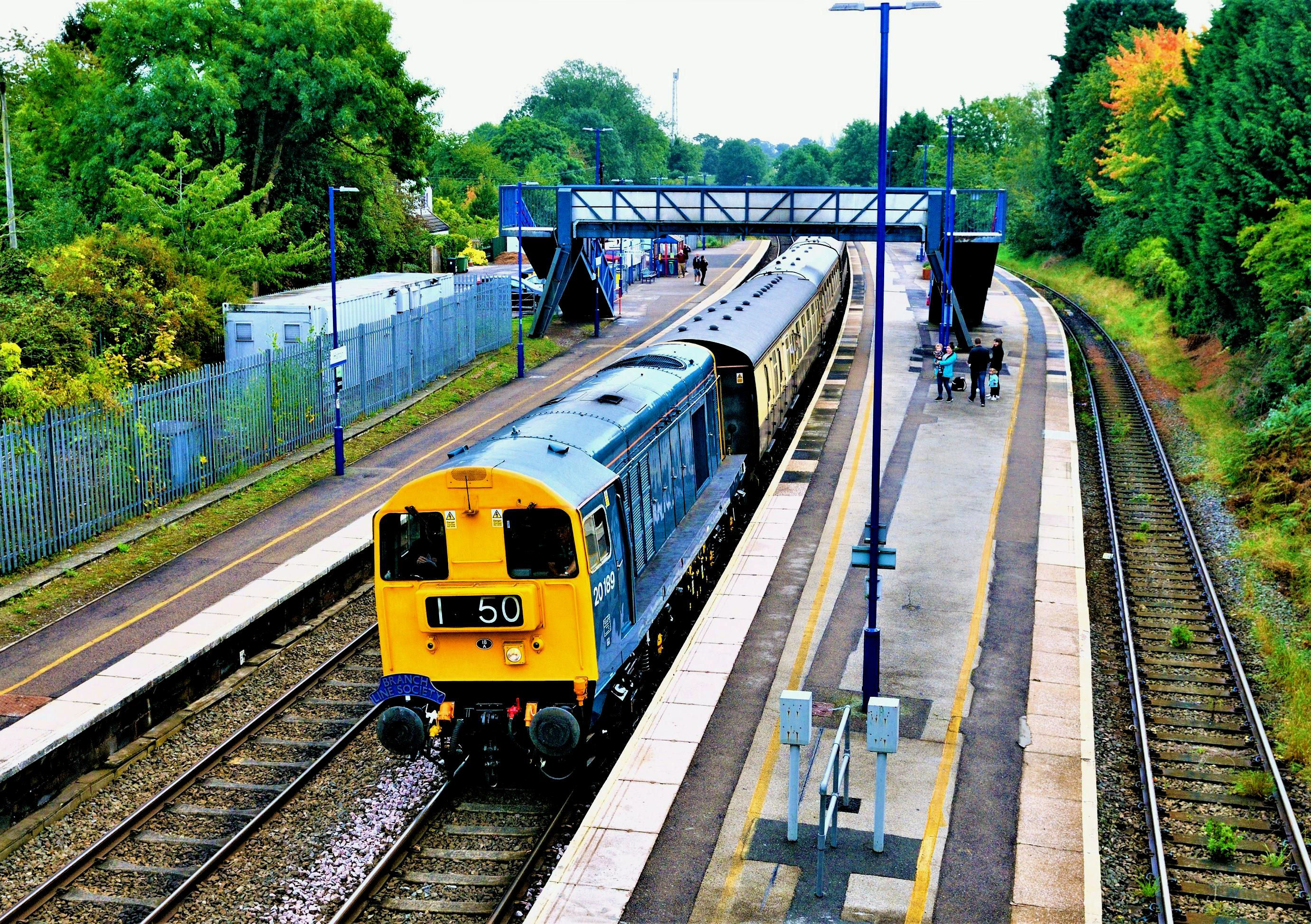 Also in the morning, the tour calls at Hatton P2; looking south towards Warwick; P1 is on the left and P3 is to the right.
[© Peter Tandy 2019] 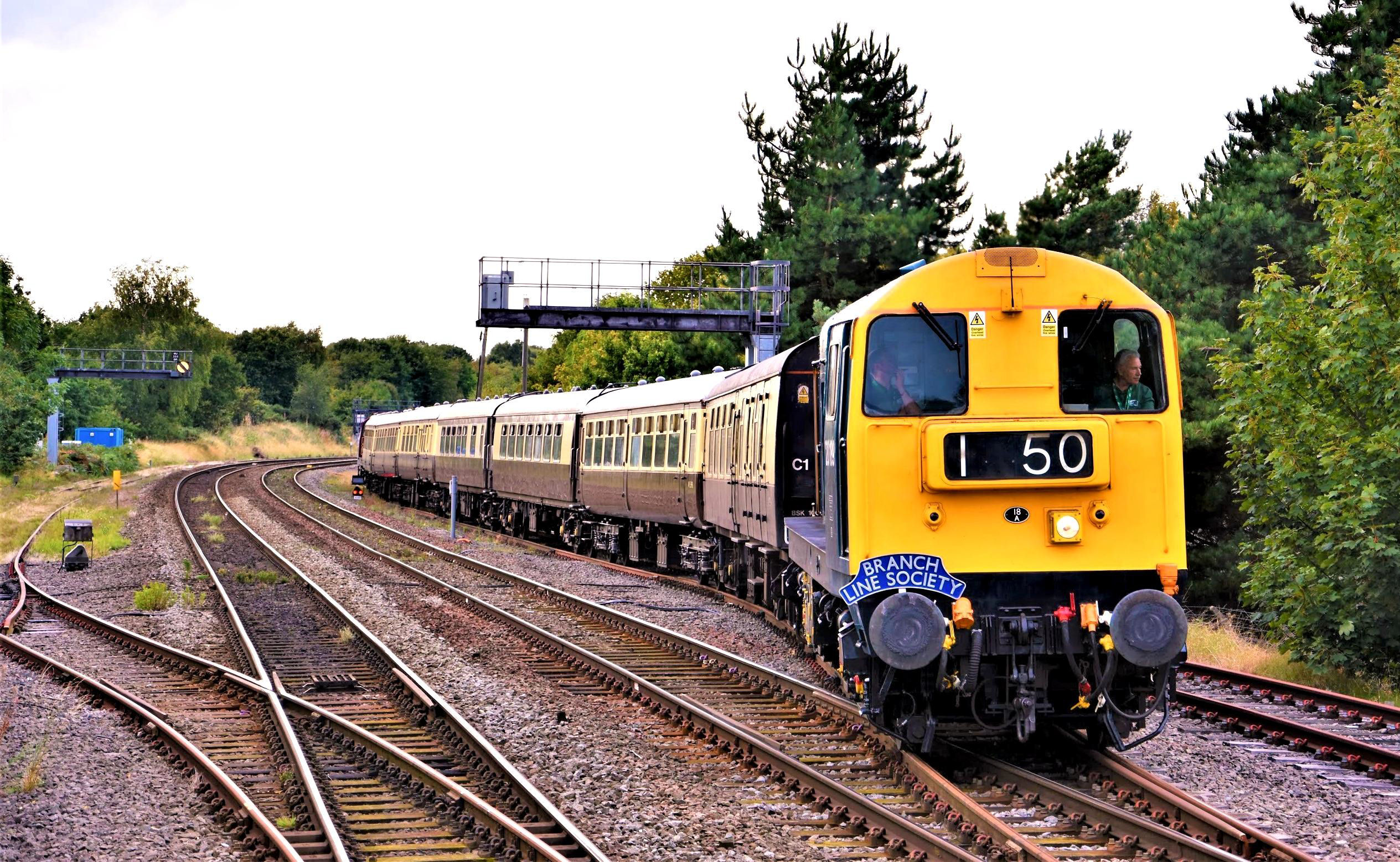 Dorridge North Jn which is north of .... Dorridge, the tour is heading .... north towards Birmingham after doing the extended and remodelled Up & Down Dorridge Goods Loop.. Left is Up Dorridge Passenger Loop (covered later in the tour). Taken from Bentley Heath Level Crossing.
[© Matthew Plumpton 2019] 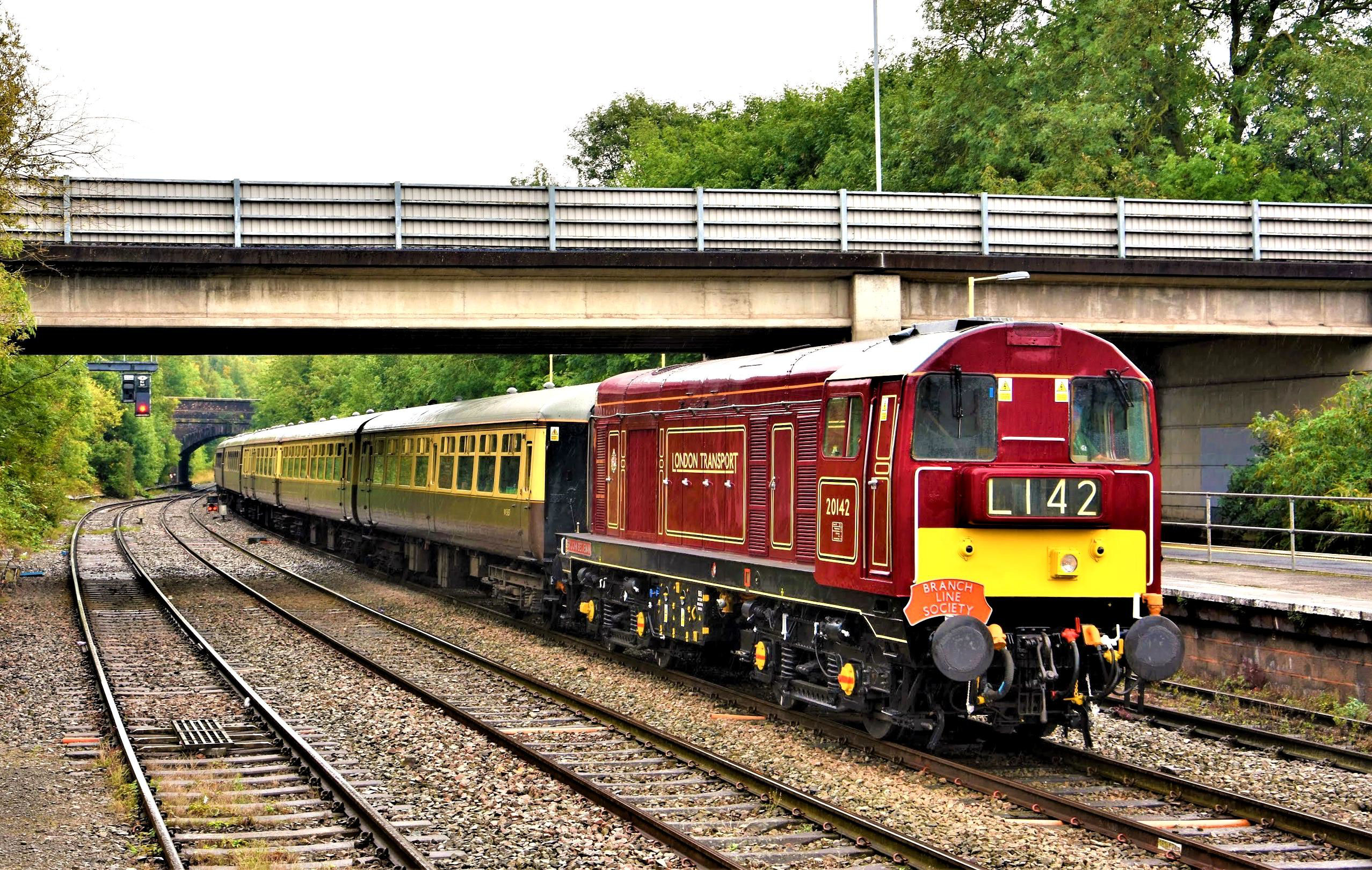 Arriving at Wellington to reverse and take the Donnington branch; little used bay P3 right of the engine, the other side of the platform fence.
[© Matthew Plumpton 2019] 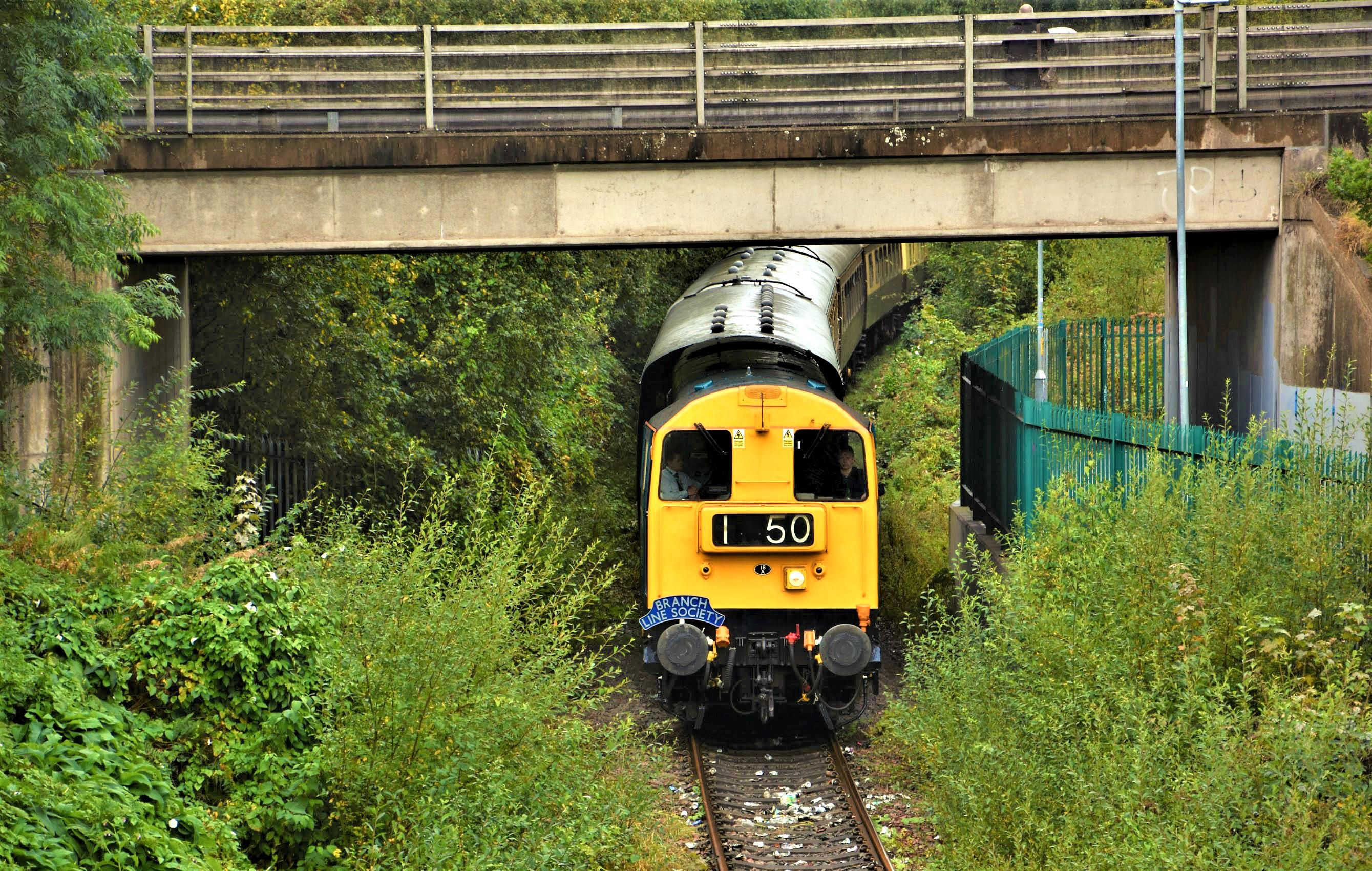 On the Donnington branch - which was double track when it was a through passenger line between Wellington and Stafford via Newport.
[© Matthew Plumpton 2019] 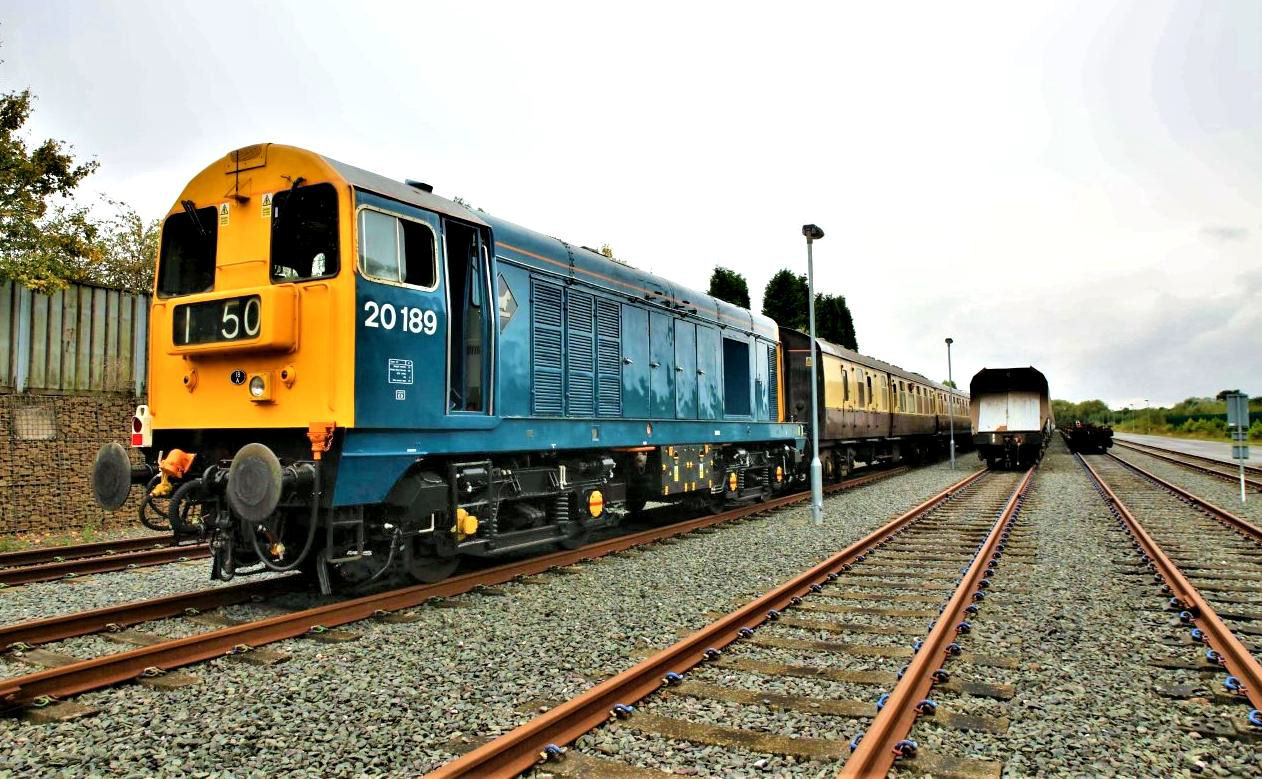 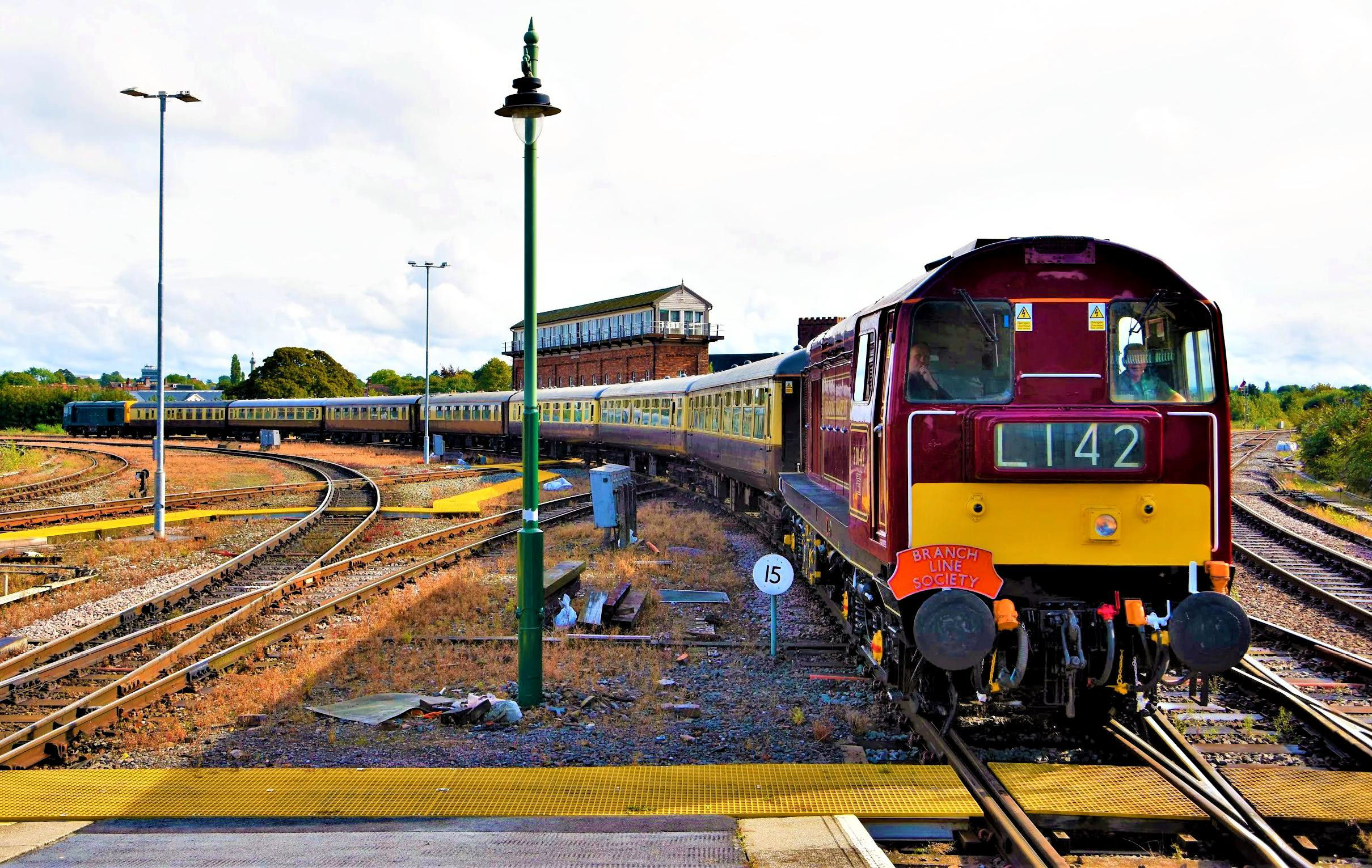 Arriving at Shrewsbury P4 from the Birmingham Line; Severn Bridge Junction signal box is the largest in the world with semaphore signals.
[© Matthew Plumpton 2019] 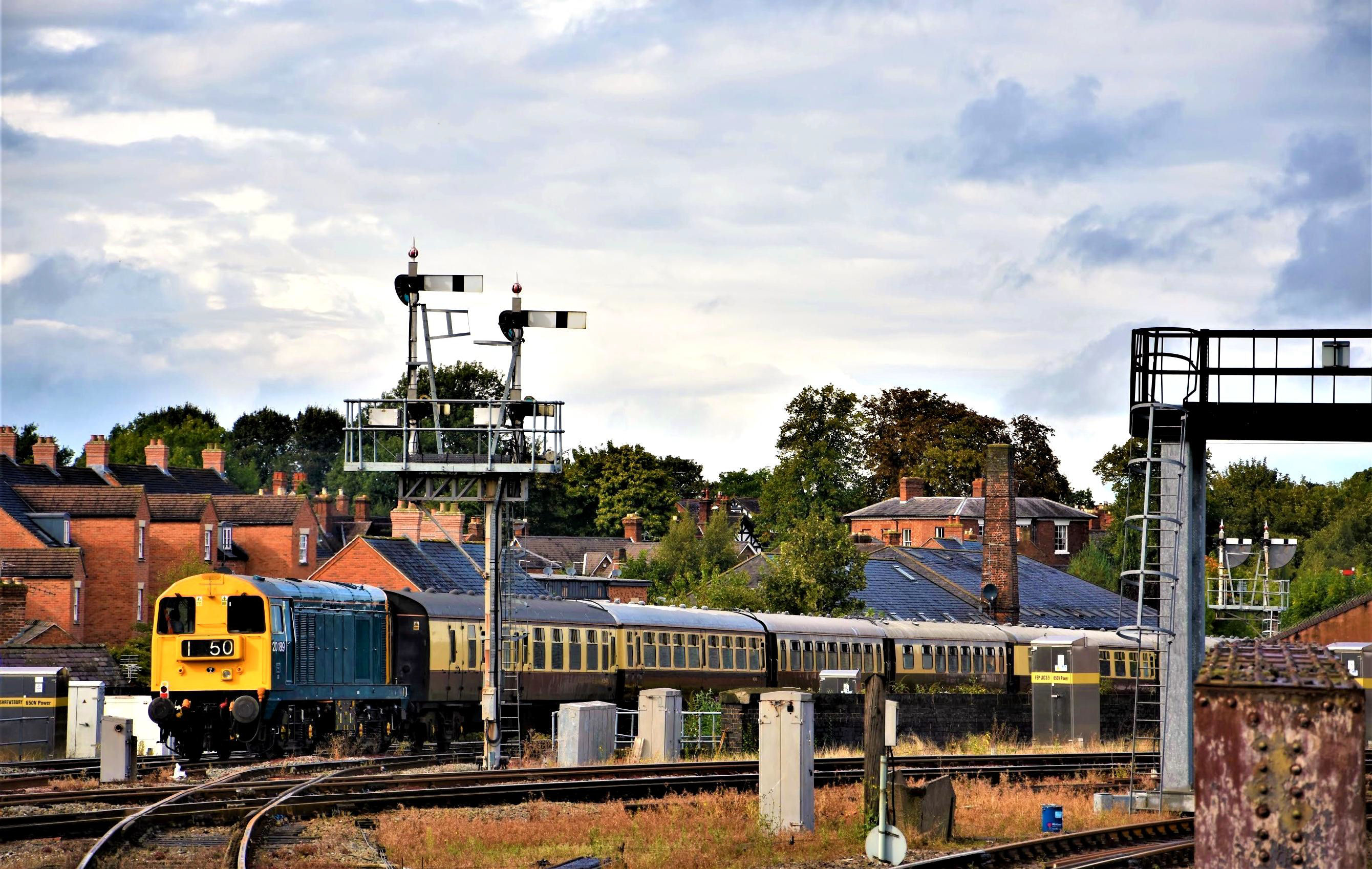 The north end of Shrewsbury, the ECS heads north out of the station on the Chester line to....
[© Matthew Plumpton 2019] 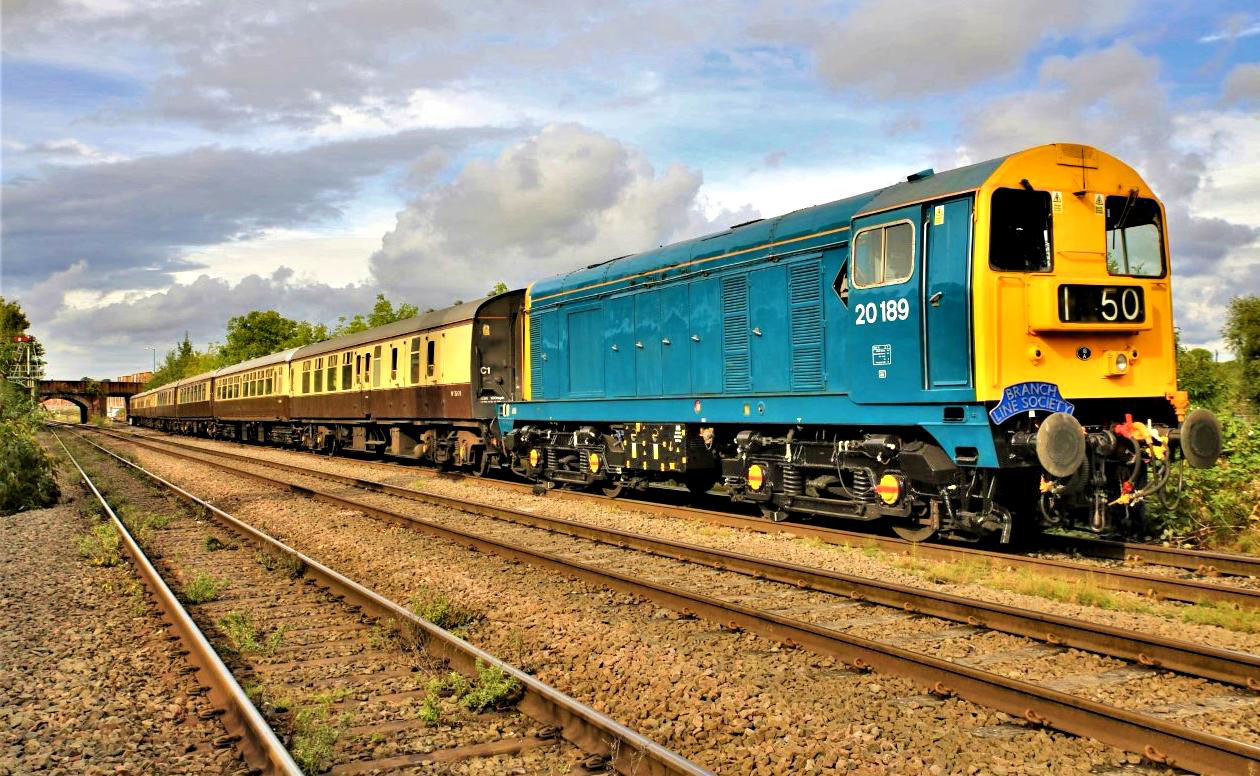 ...Castle Foregate Sidings, Third Line (although there is now only one!) which is also the access line to Coton Hill Yard. The Chester line is to the left looking north towards Gobowen.
[© Authorised NR staff with thanks to Kev Adlam 2019] 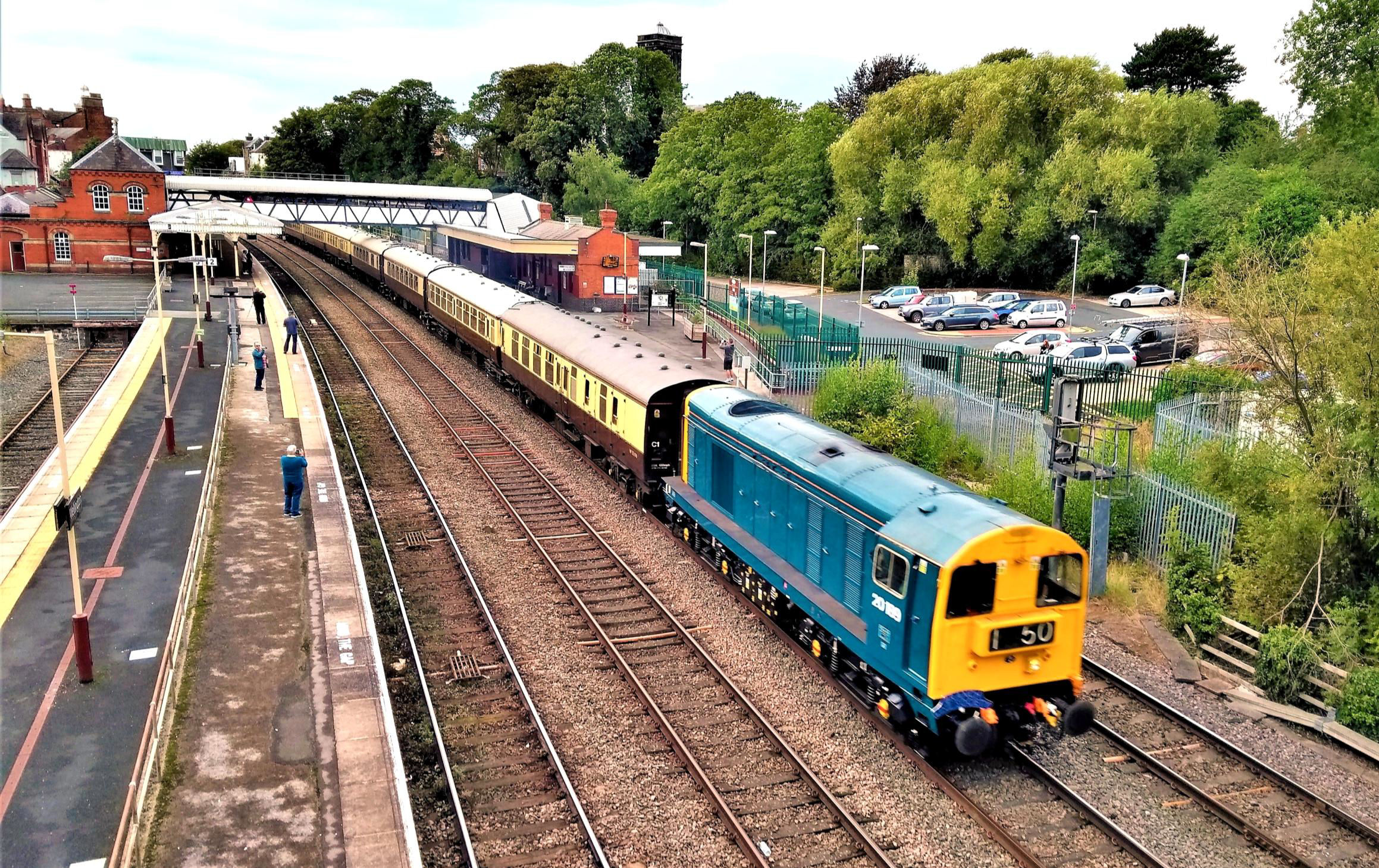 Returning from Shrewsbury towards Wolverhampton on the Up Wellington through …. Wellington; bay P3 is far left.
[© Dave Cromarty 2019] 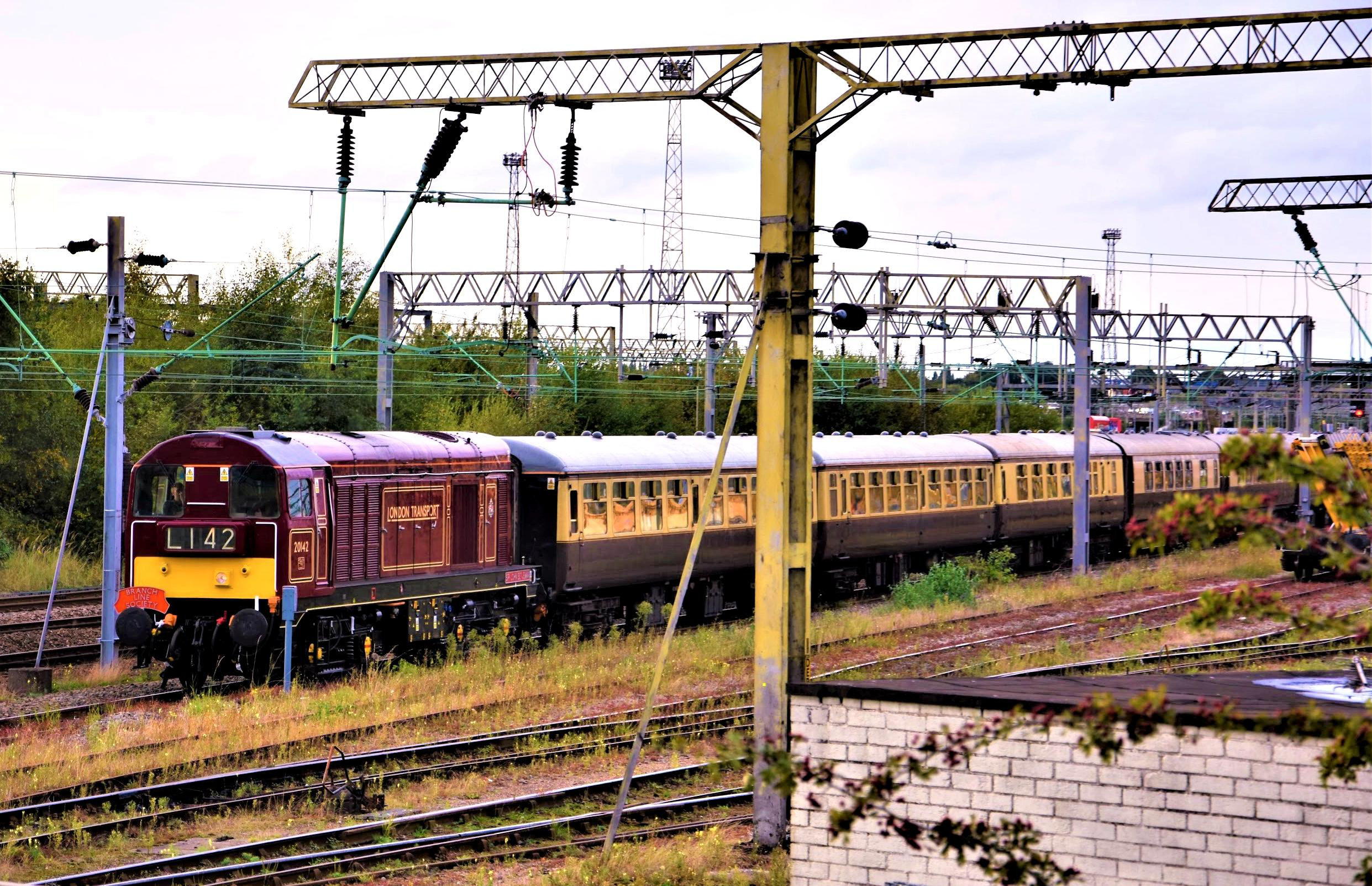 The Birmingham Balti Bash on Bescot Up Goods Loop with the Down Yard and floodlights behind.
[© Matthew Plumpton 2019] 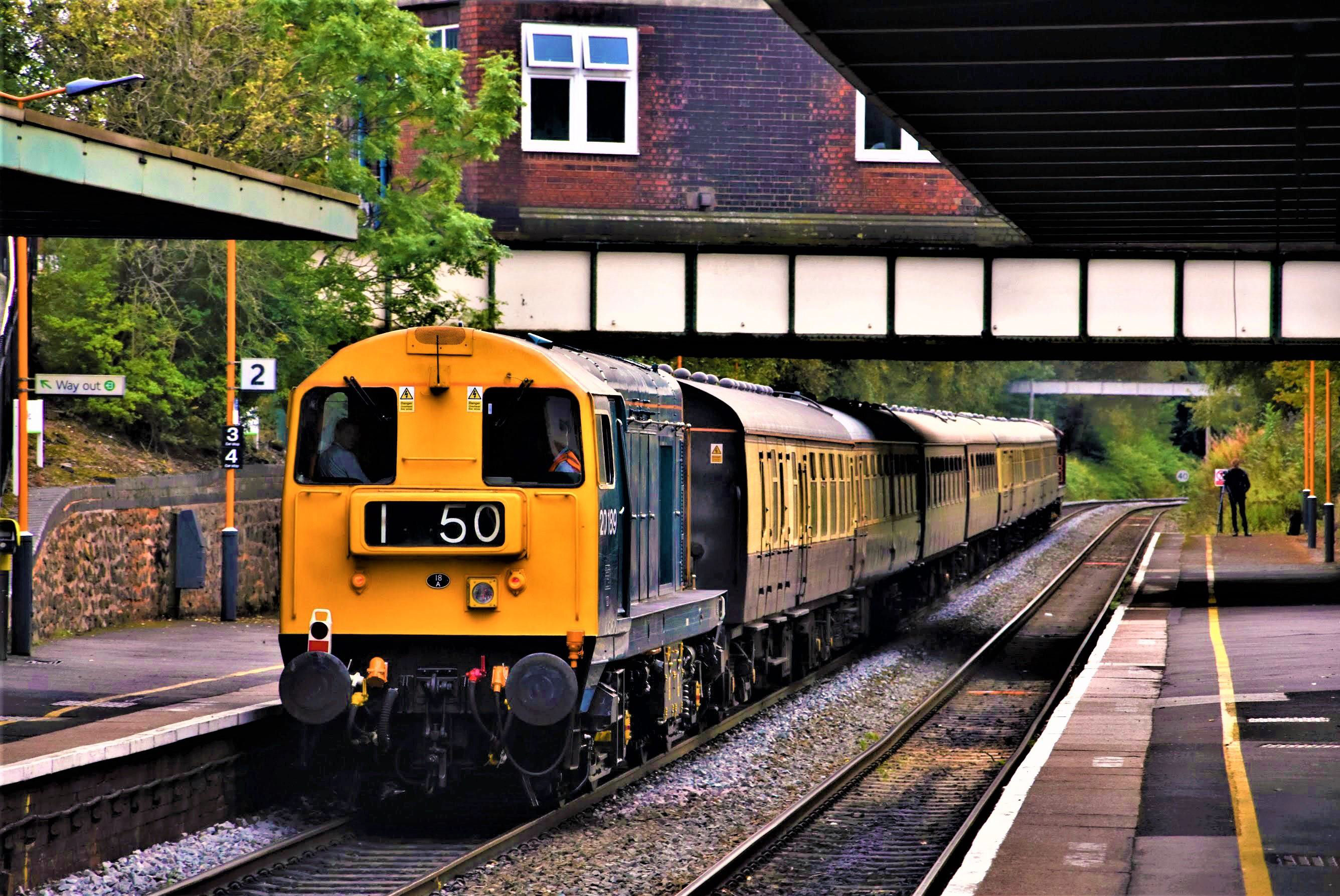 Rowley Regis with the tour heading Down to Stourbridge Junction to reverse in P2.
[© Matthew Plumpton 2019] 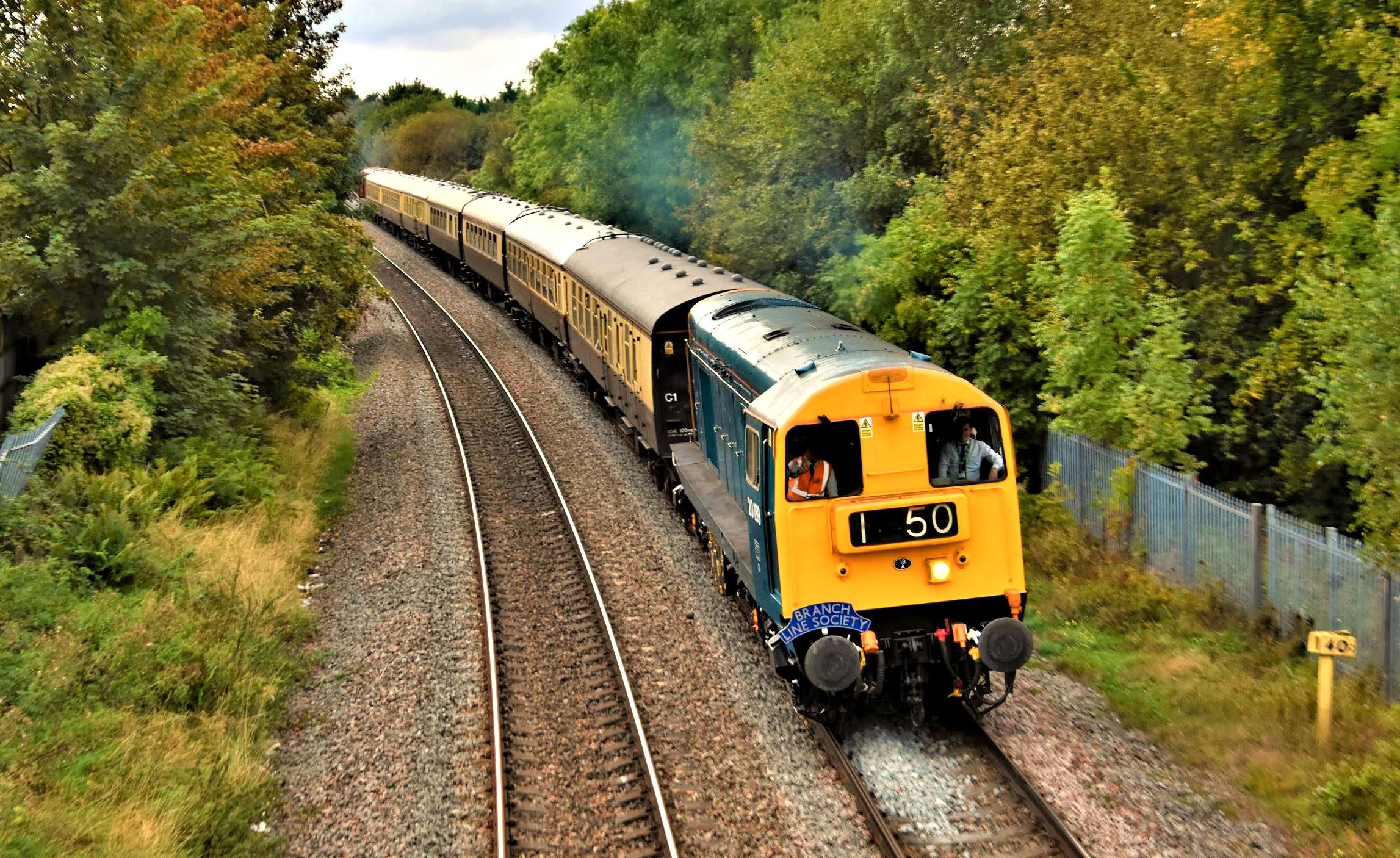 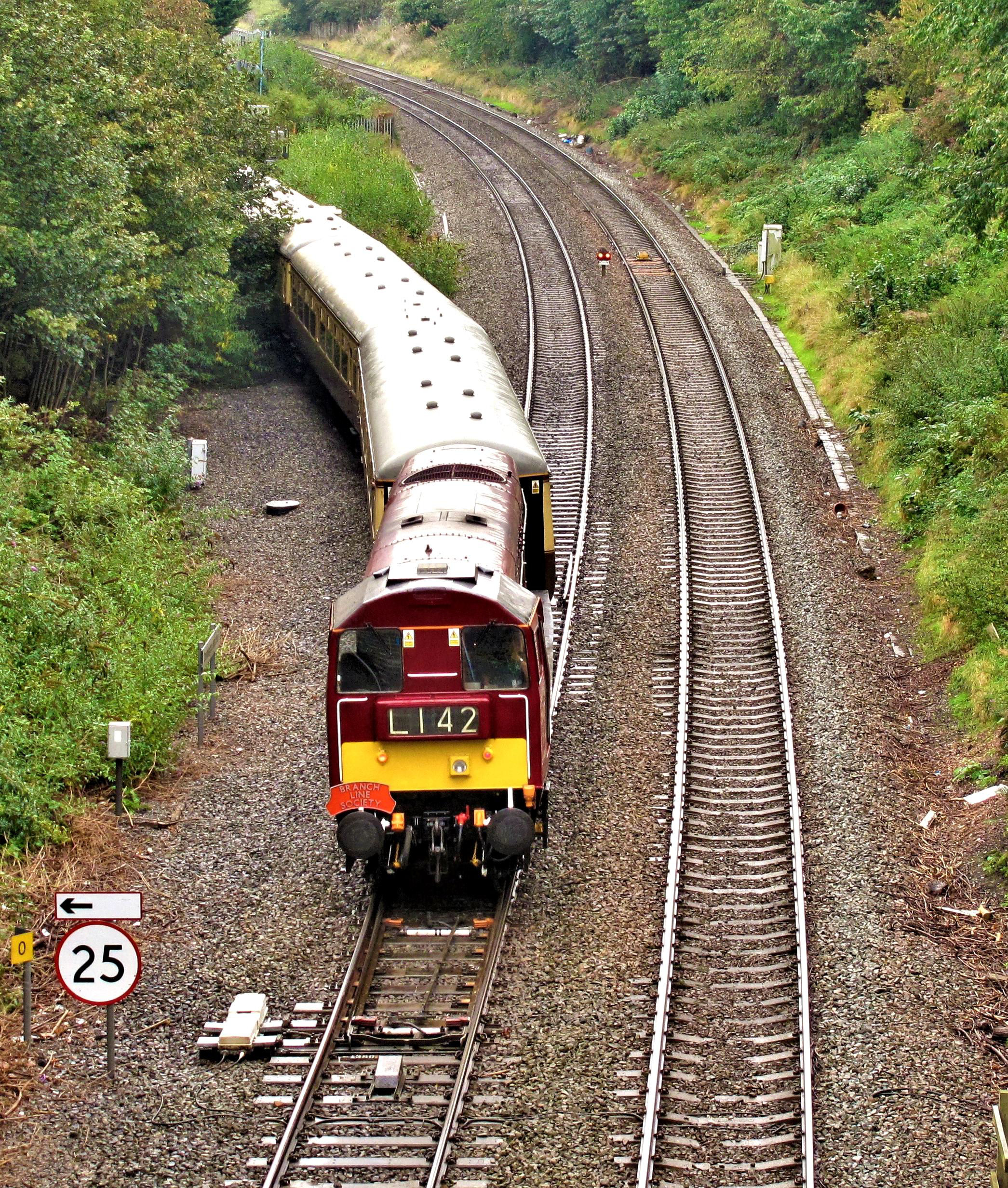 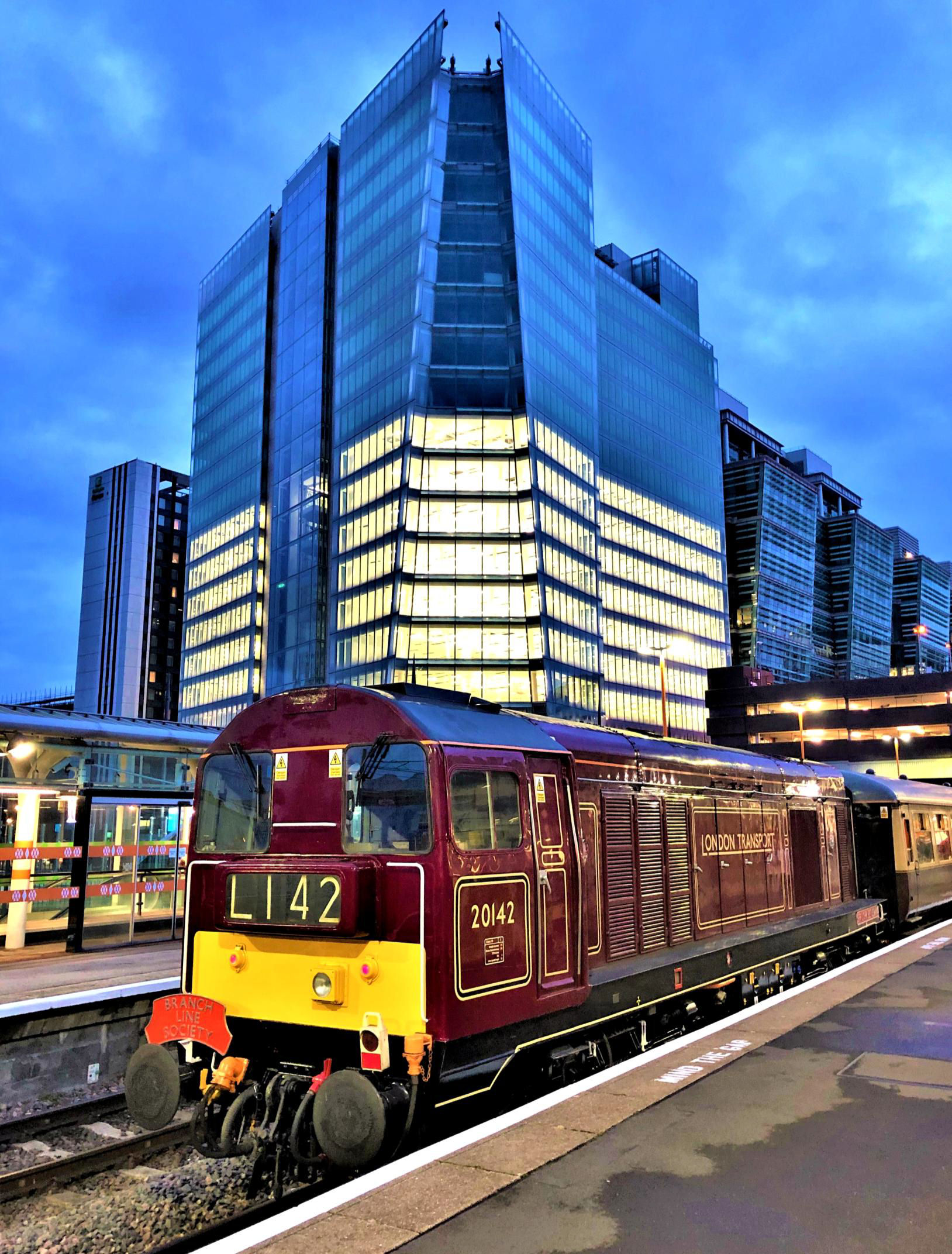