The dawn of a sunny and hot Bank Holiday Monday can only ever mean one thing - pack up the car and head to Scunthorpe Steelworks. Our Society has taken to running twice annual brake van trips around the vast Scunthorpe complex with more than 100 miles of track set in 1,700 acres. This was the 19th such trip recently, which usually take place over the Aug Bank Holiday and the first week in Jan when much of the site's operation is shutdown, allowing us access to areas we wouldn't normally be able to reach. For regulars they mark the passage of time, like Christmas, birthdays, dental checkups and car servicing/MOTs etc.

So it was that at 09.00 with the temperature already in the mid-20s and rising, I turned up at the Appleby Frodingham Railway Preservation Society Frodingham platform to find a mix of familiar 'old faces' and more than a few newbies. In fact, the total of 80 participants set a new Society record for attendance here due to the temporary availability of four brakevans instead of the usual three.

Soon after 09.30 Yorkshire Engine No1 made its way into the platform with said brake vans in tow followed by a dignified scramble to grab the best places, standing on the veranda or seated inside depending on choice. I've always preferred the veranda to give the best view of the track ahead and fill in my A3 map. Thanks to Mark Haggas, all participants were provided with two printed colour copies.

Setting off, news came that a TPE train bringing tour participants had started from Sheffield instead of Manchester (the first time this had happened). Our organiser decided we would return to the platform to collect them off the next train. That still allowed time for a visit to the CEW Dock which was much clearer than usual, and to the end of its headshunt, overlooking the Heavy Repair Bay (HRB) and some lines at the rear of the HRB itself. This was where our newcomers got to enjoy the magical experience of that first Scunthorpe Kiss when we gently nudged the buffers at the end of a cute little siding behind the bike sheds HRB. Even a few of the grizzled veterans shed a tear. Four of the eight northeastern end HRB lines were traversed and the Pig Castor Stay Road was thrown in for good measure. [Thanks to our map man Martyn Brailsford, a marked up updated tour map is available on our website Archive.] A shock for many at this 'point' was the total disappearance of Scunthorpe Plate Mill (closed Oct 2015) -all demolished - leaving just Line 23 and a very large empty space drastically changing the landscape.

Retracing our tracks to the platform, collecting two grateful and relieved members, it was time to hit the Rail Service Centre (RSC) where we enjoyed - for me and I suspect many others - the highlight of the day, running through 6 Bay of the massive RSC building then out to the end of line. Whopping track… From there it was a short journey to the Corus Rail Sidings where I scored my second section of track for the day as we ran through Road 6 to the end of the headshunt, returning via Road 5.

That left time before lunch for a quick trip round the 'Angle' and beneath the Foreign Ore Branch to Mills Exchange Sidings. This busy part of the railway complex comprises 11 sidings, of which I need Roads 8 & 9. Sadly these were both full, so Road 6 it was. From here we nipped down to the Medium Section Mill where an unsuspecting wagon minding its own business suddenly found itself on a trip to the end of the headshunt. Which just proves that you can't stand in the way of progress, particularly when it's the BLS. With lunch calling, we headed back through the same Mills Exchange Sidings road, sped back round the 'Angle' and made our way to the AFRPS Appleby platform for a well earned break.

A sumptuous buffet was enjoyed courtesy of the hard working volunteers from the AFRPS, many ate 'al fresco' and also had an ice cream from the adjacent AFRPS shop - they sold well on this hot day. Since our Jan visit the buffet had been fully refurbished inside and was very smart and comfortable. The AFRPs volunteers had no problem efficiently coping with 80 people - their buffet record is 170!

Then it was time for Round Two, a four hour afternoon stint in sweltering low 30s temperatures. Could we survive? Would Alan Sheppard's impression of a ripe tomato continue? Only time would tell…

But first a little shunting. A DMU carriage had the audacity to be blocking the recently extended AFRPS headshunt we needed by the platform. No problem, a quick bit of coupling (ooh err missus) and said DMU was in the adjacent road. Buoyed by this early success, we were clearly up for any challenge. So when some wagons blocked our access to the coveted High Lines - well there was only one winner. Soon we were climbing to the bridge that passes over the Stores Road (ground level line); this is the closest we're likely to get to those four hot ladies of Scunthorpe - the blast furnaces Mary, Bess, Anne and Victoria. [Strictly entre nous, Mary & Bess date from 1939, the other two from 1954.]

Back down to earth and where next? Just for a change, back round the 'Angle' to the Mills Exchange Sidings, but this time down Road 11 to the Former Bloom & Billet Mill (BBM). 'Former' as in 'used to be' rather than anything to do with forming steelwork - this two mile long production line was moved to India. Here I scored my third bit of track when we ventured into the building down BBM5 (left hand line) to the end of the line. For good measure BBM3 (right hand line) also ended up on the map before our return to Mills Exchange Sidings to reverse. These were possible due to the reduced activity at the whole works which was on summer shutdown, just ticking over, for holidays and maintenance. An overhead crane was being maintained above the Furnace Road - a continuation of the line through the end of the Former BBM. This line was therefore under possession which extended to the original and recently opened new through lines to Concast. This possession was due to be removed the very next day! One for our next visit then; it was also noticed that its new loop at 'the Subway' was complete.

Next a quick sprint round the longer way to Concast to reverse, noting in passing that the connection to the Muck Bank was secured out of use (it's amazing how things change). En route we were able to glance longingly at that new section of track linking the Former Bloom & Billet Mill with Concast.

By now the day was at its hottest and Scunthorpe Sunthorpe was positively glowing. However, it could also have been the torpedoes (hot stuff) that passed us as we 'ran' via the Mill Shop 'Running' Road to the P'Way Depot Headshunt. This was once part of a through route to our old favourite, Mills Exchange Sidings. From the headshunt, a quick sprint past Temper Road (we wouldn't have wanted to lose that) via the West Bank (no, not that one) took us past Northants Bridge and Road 65 to reverse. This was to give the railtour access to the line round to the complex of lines at Bridge 44 and beyond which also involved an interesting double shunt with three reversals where there are four tracks.

There is quite an intricate layout here and some of it has changed over the past year, so in between trips to the BOS Gantry, Rod Mill Line 14, its Loop and the Scrap Bay right hand road, we covered an impressive number of crossovers and connections. By now news had filtered through that the 19.08 TPE to Manchester Airport had been cancelled, so a dash back round the site's perimeter brought us back to the AFRPS platform in time to connect with the 18.48 Northern service to Doncaster instead.

All in all, it was another excellent trip around this fascinating complex and I'm sure some of the newbies will be returning for another bash. We covered around 36 miles with a dizzying 58 reversals. Most importantly, the record turnout ensured the much needed donation was a record amount: £3,645. As usual there was no deduction by the Society for any expenses, all the printing was donated by a member and the Society waived the normal credit/debit card fee costs to maximise the donation.

It only remains to thank the tireless AFRPS volunteers for their sterling efforts on the day, in particular Glenn Britcliffe, British Steel Scunthorpe for allowing us on site, and last, but not least, our very own route director Alan Sheppard (a fully qualified AFRPS member). Alan spent this very hot day (previously unknown at Scunthorpe) changing numerous points. Hopefully he's returned to his normal colour now. 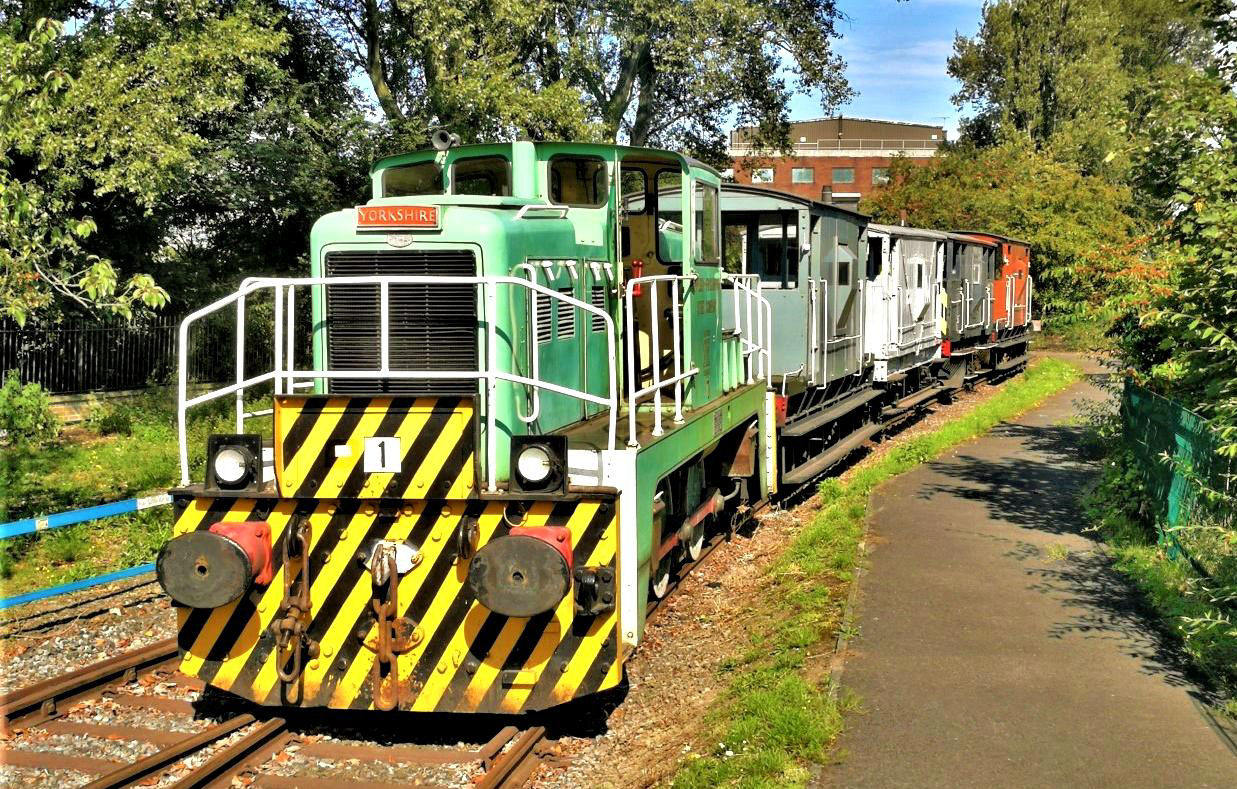 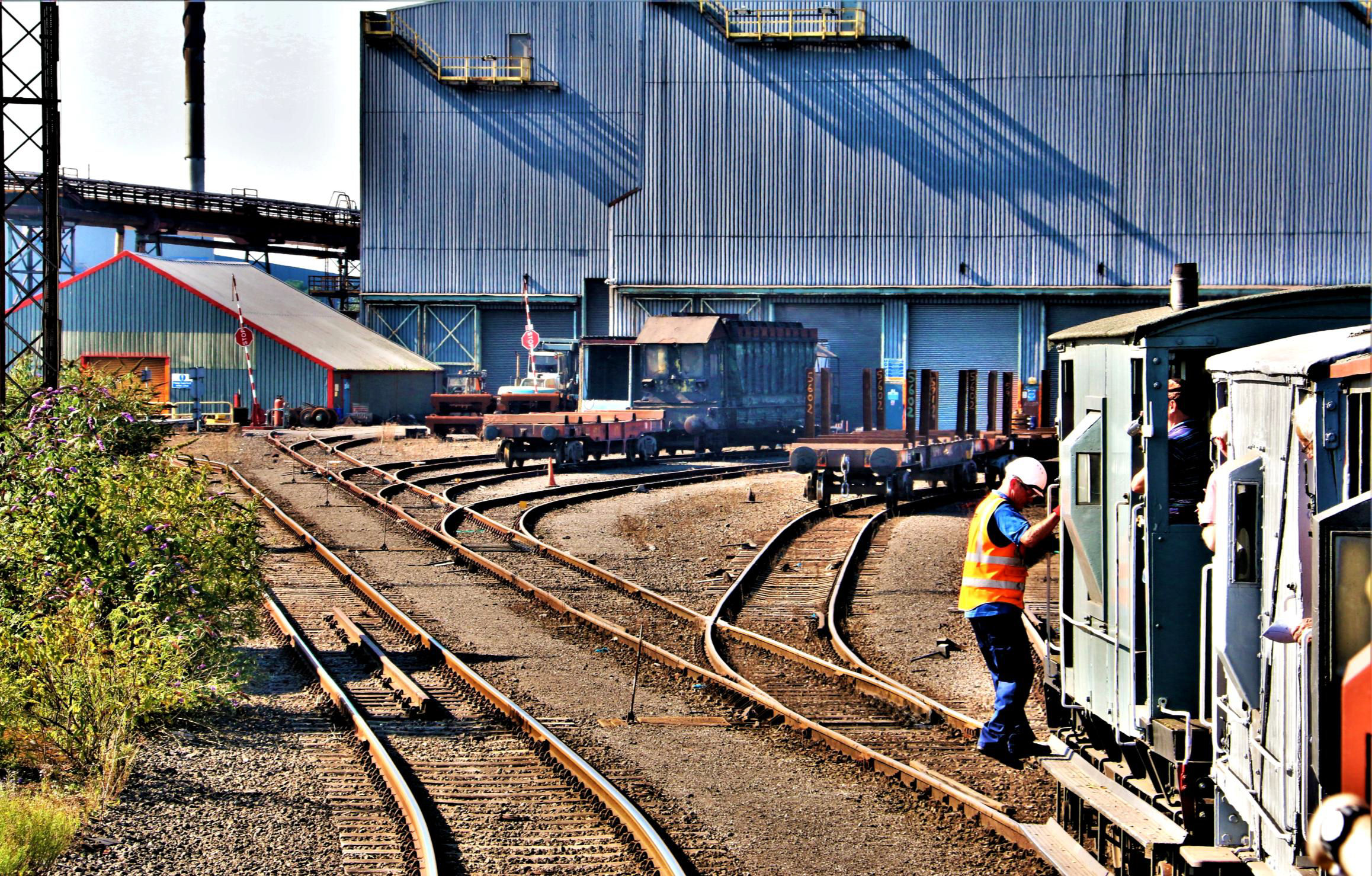 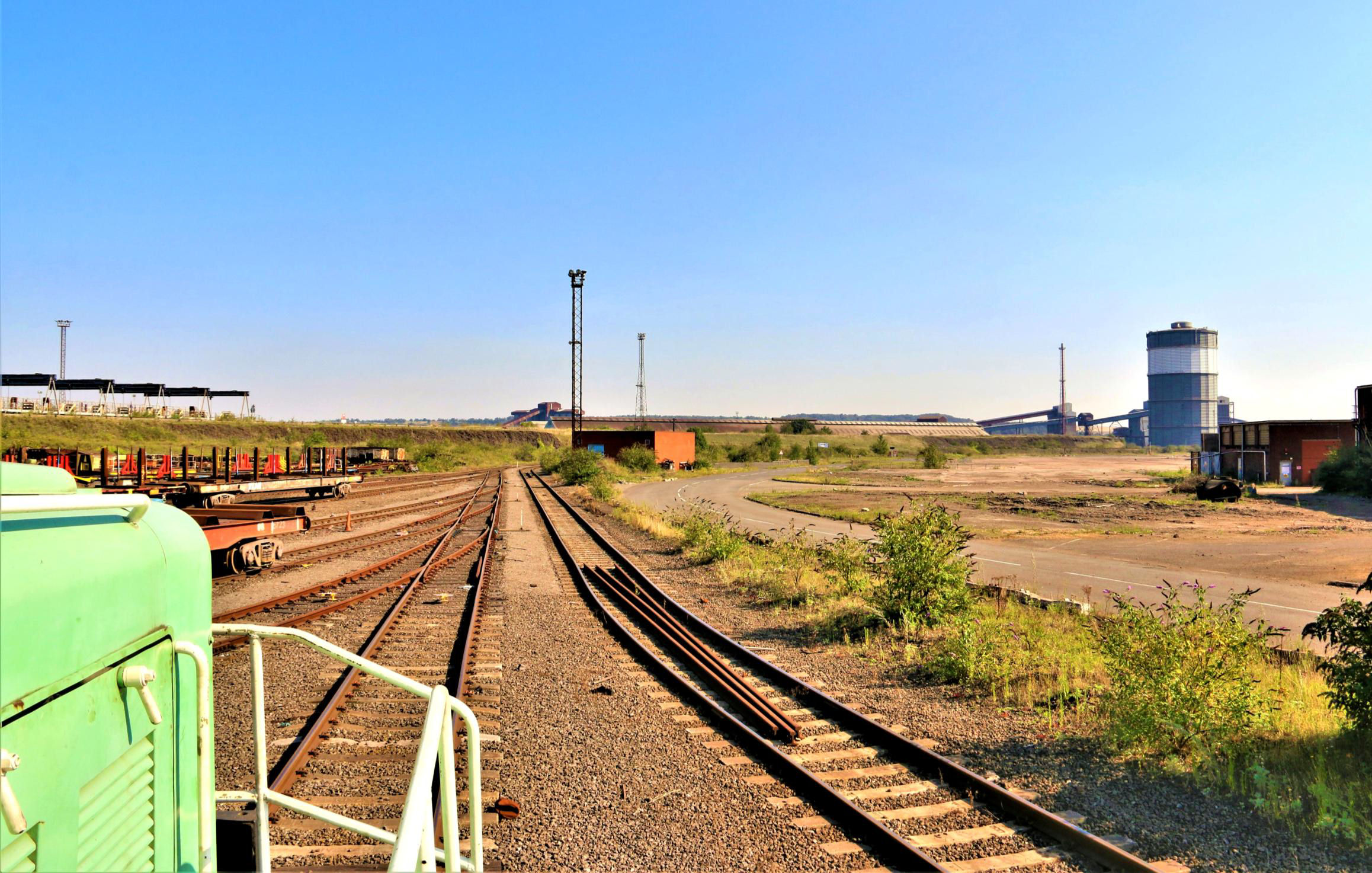 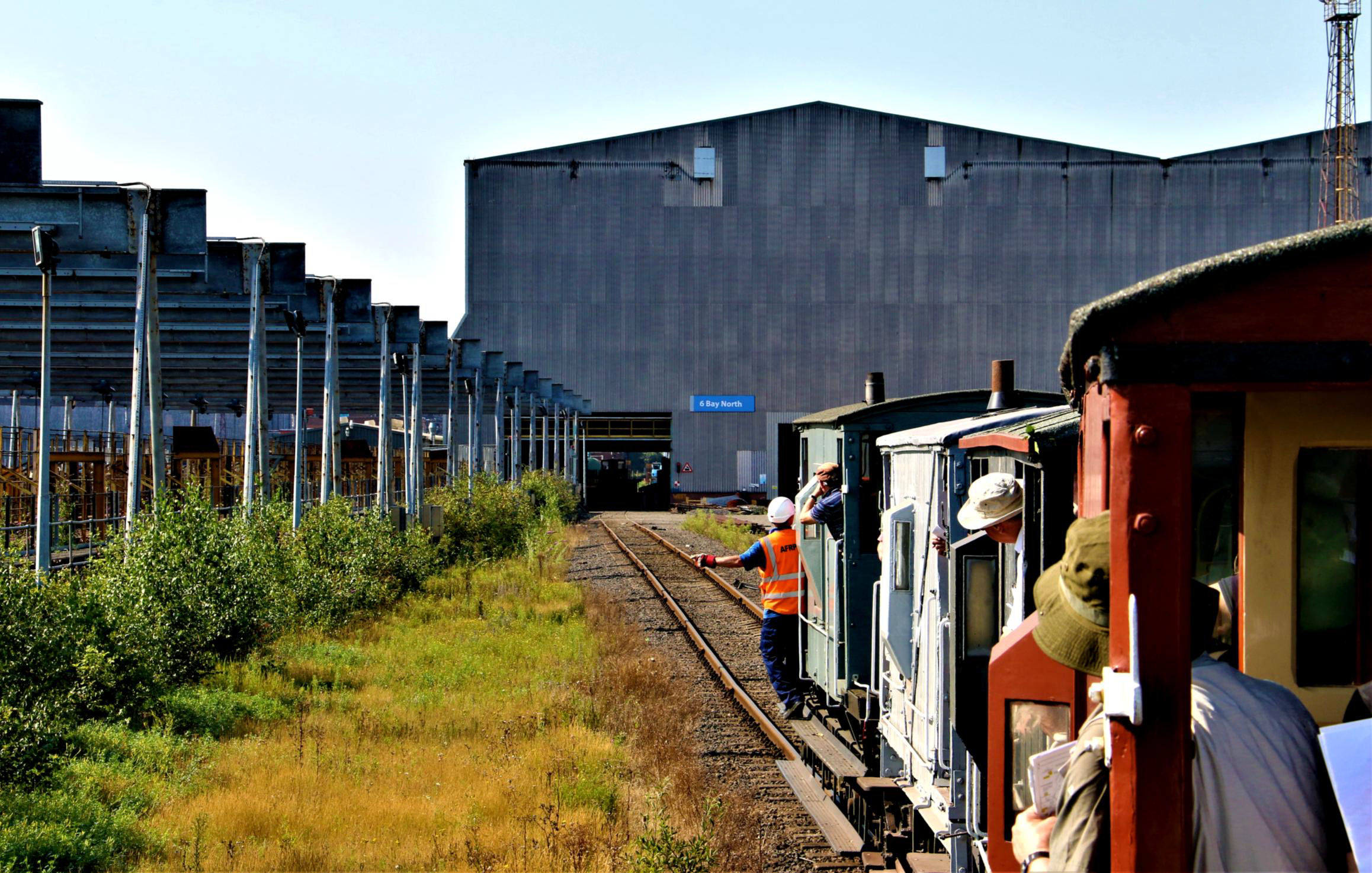 The Rail Service Centre, (as in rails and continuously welded rails) 6 Bay North end - the tour ran through the building to the end of line.
[© Chris Ziemer 2019] 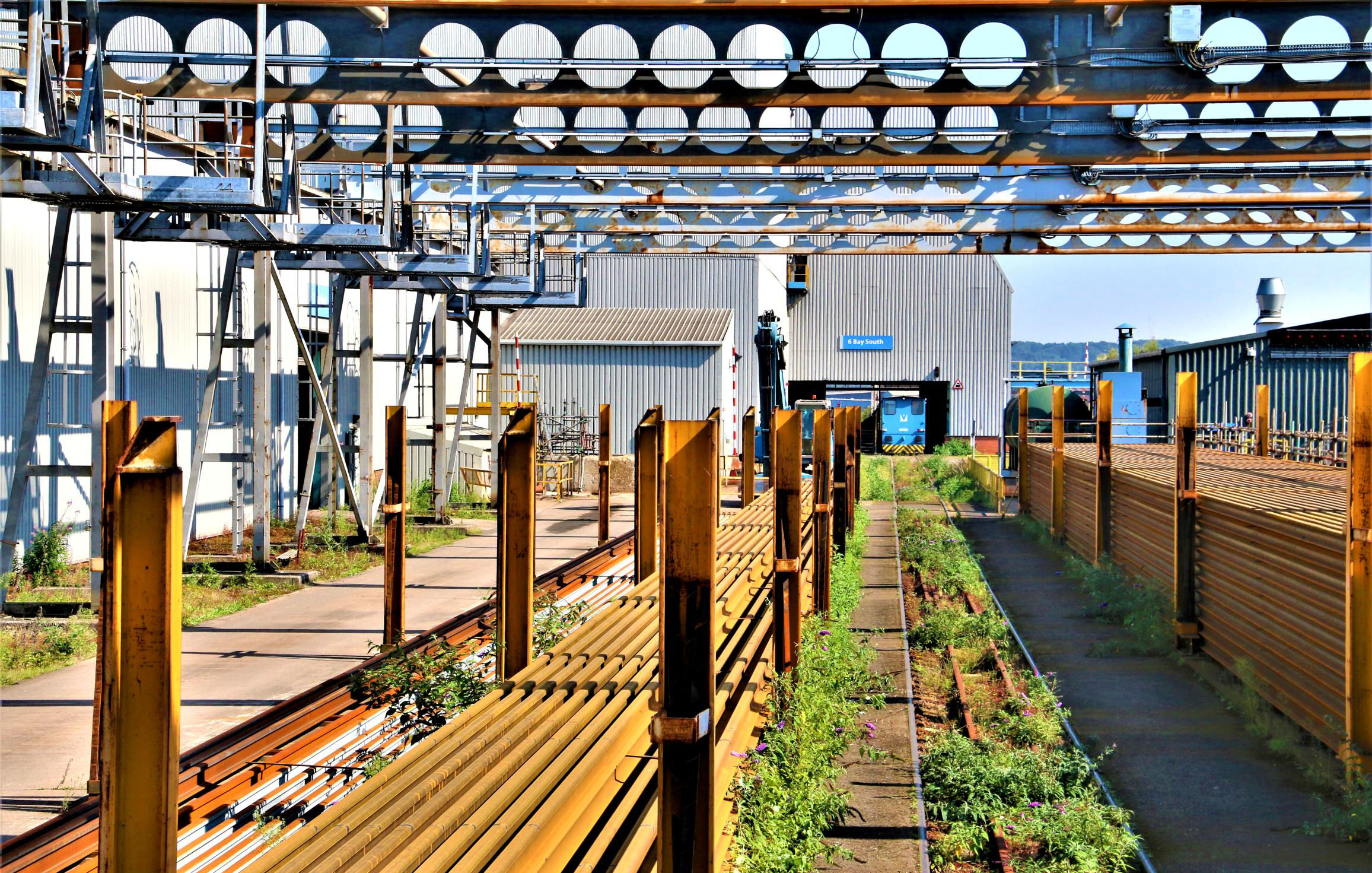 6 Bay South after running through the building, passing the blue loco on the line to its left; the other end of our train is at the end of line.
[© Chris Ziemer 2019] 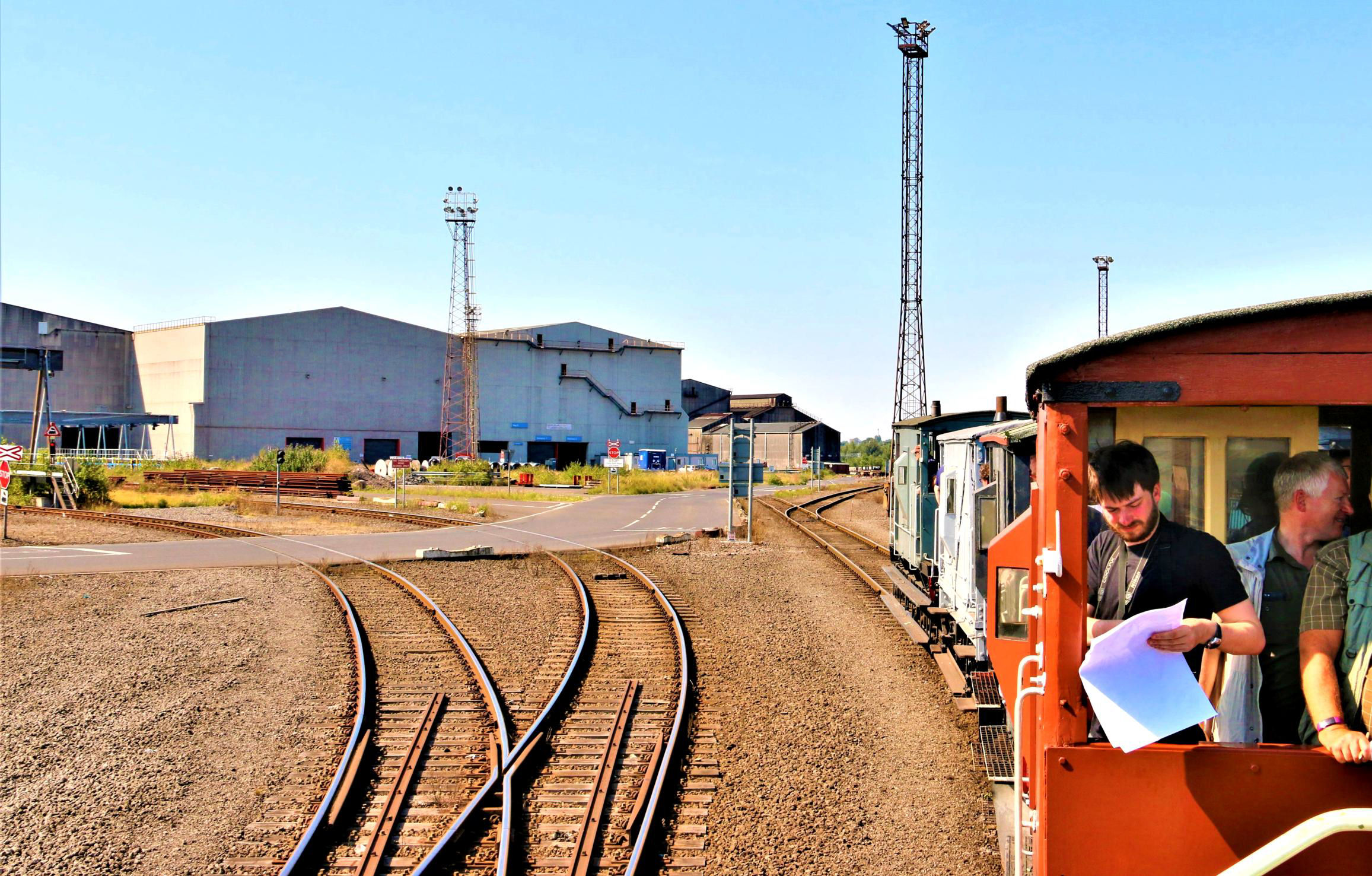 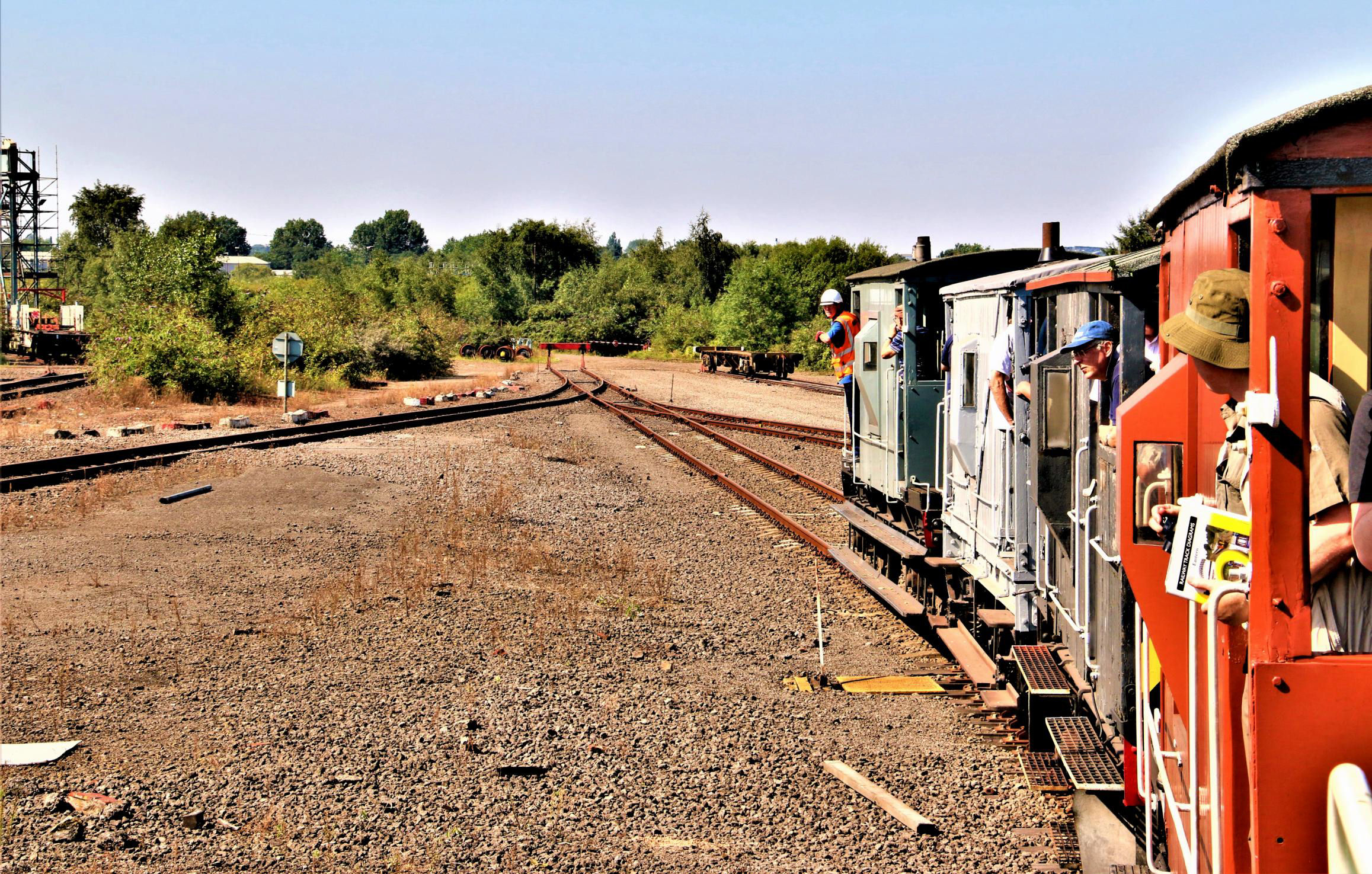 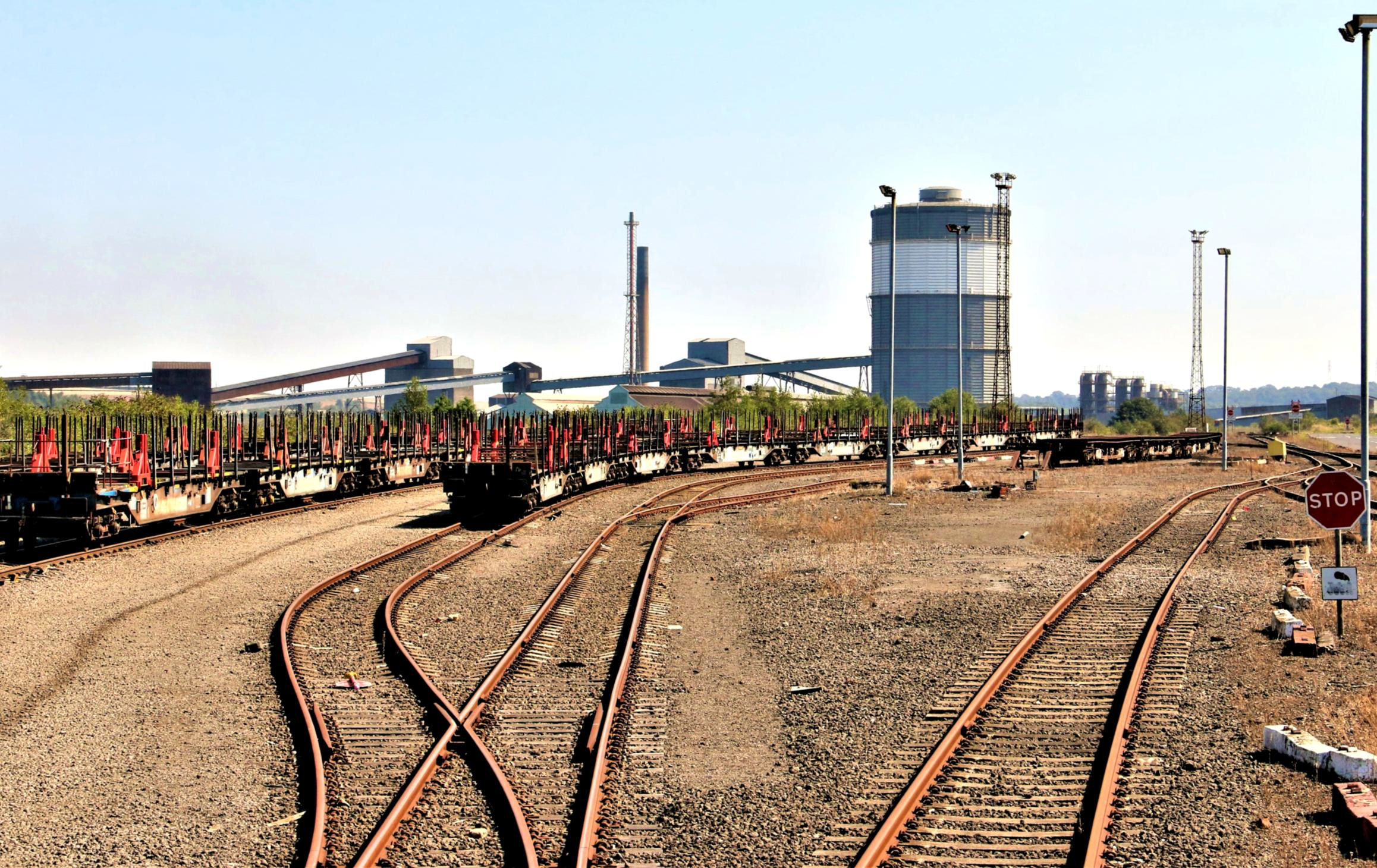 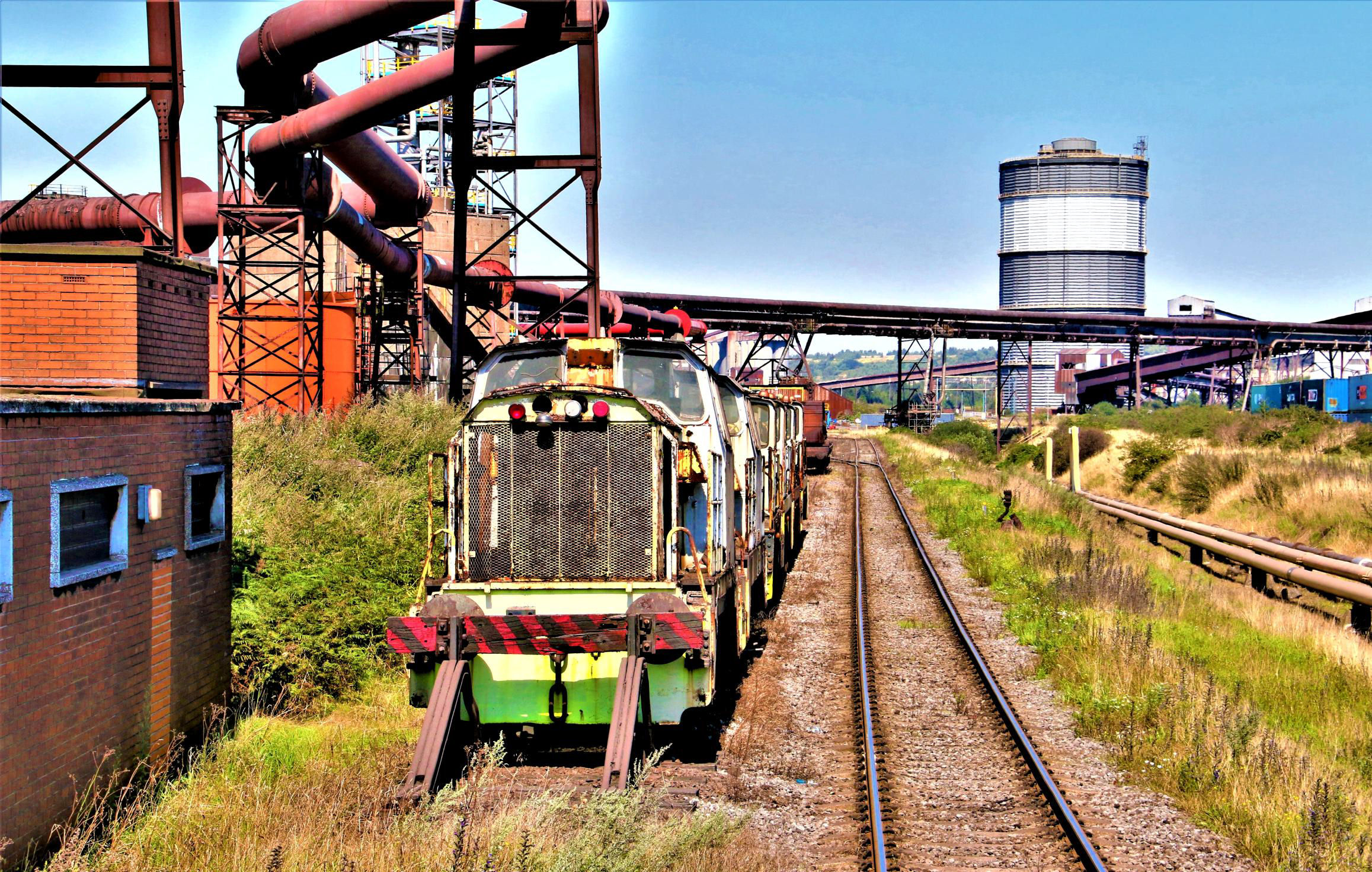 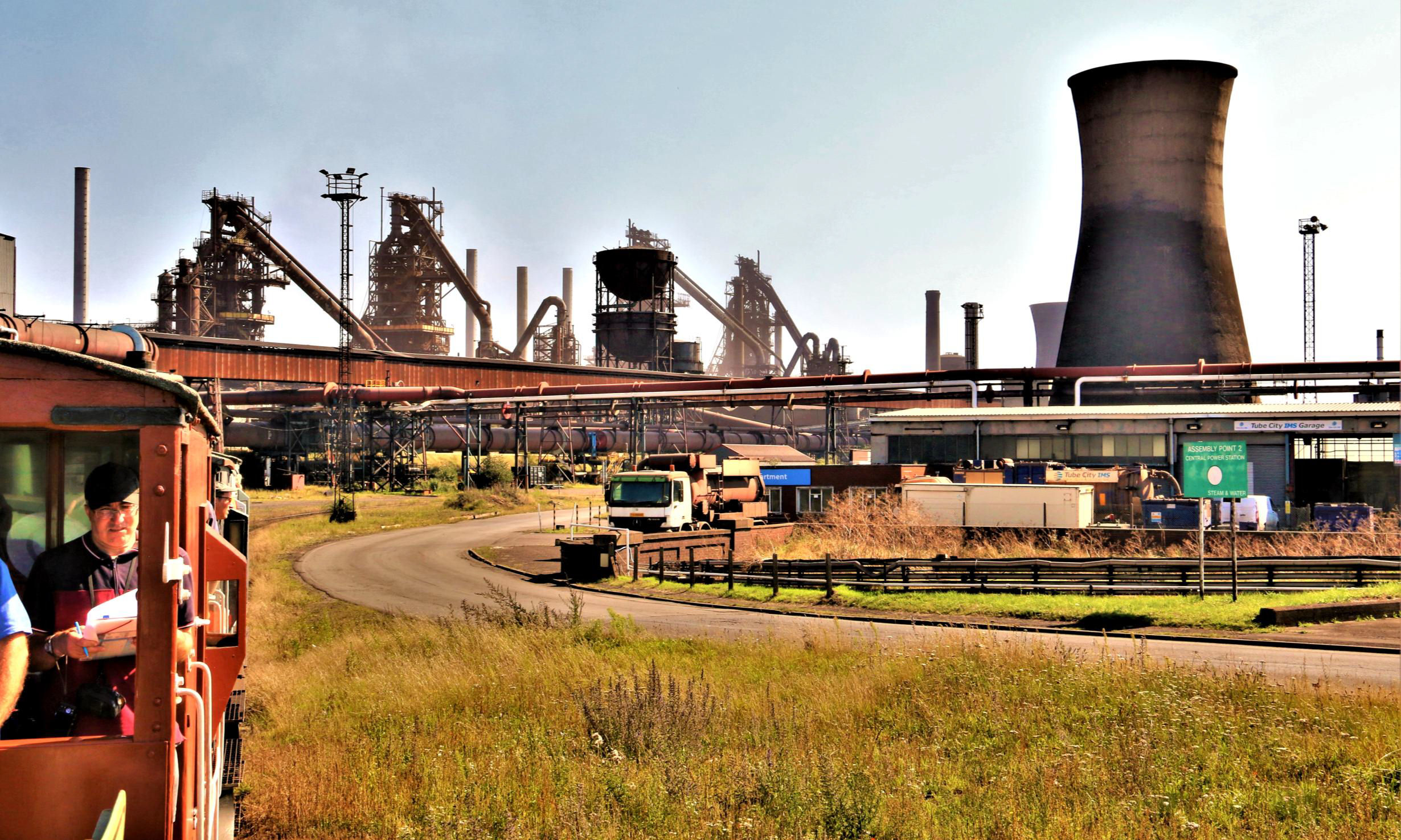 The four blast furnaces at Scunthorpe (where is the swear box then?...
[© Chris Ziemer 2019] 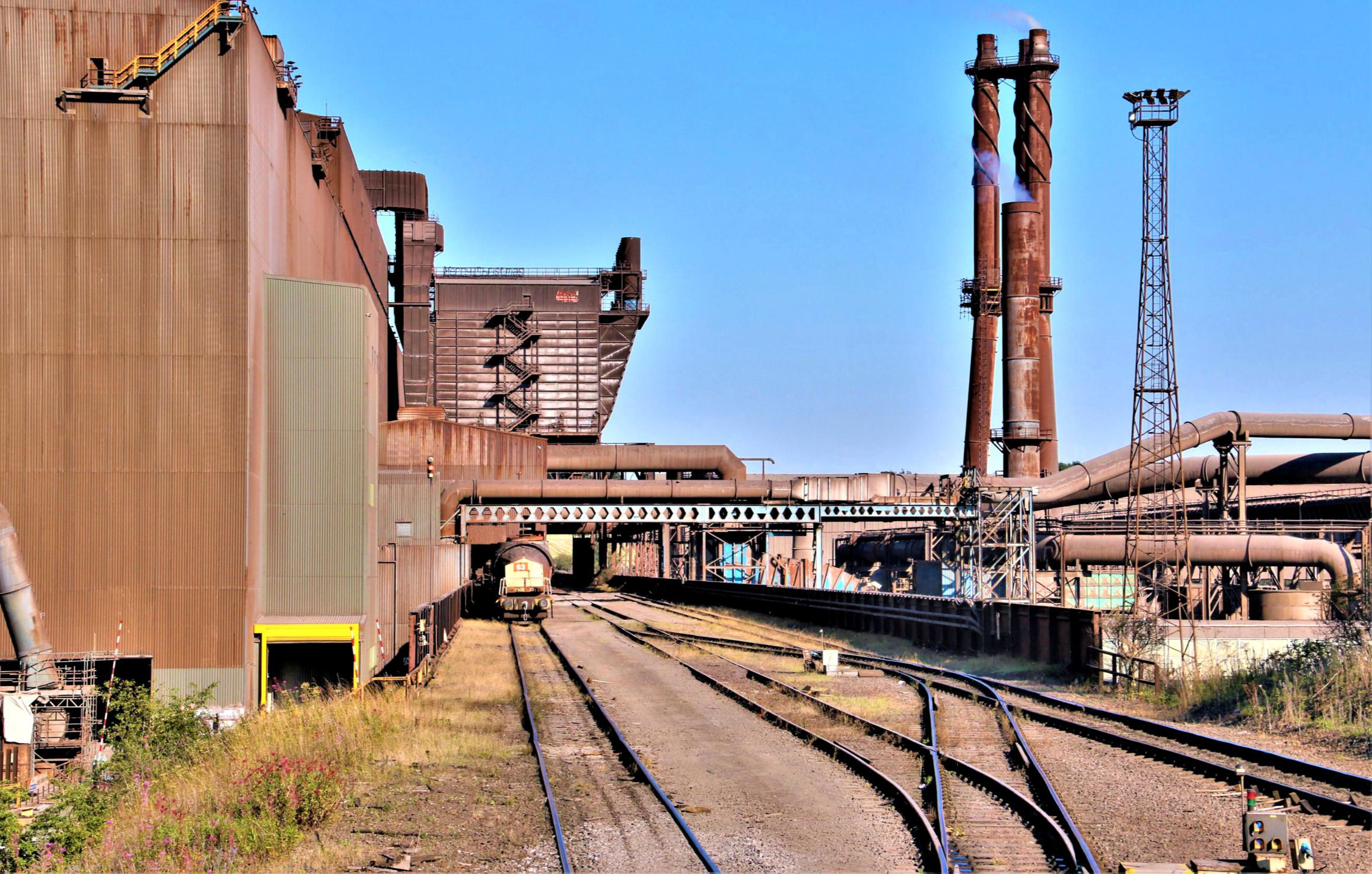 The BOS Plant Gantry looking east towards the end of line (we have been allowed up there a couple of times in the past).
[© Chris Ziemer 2019] 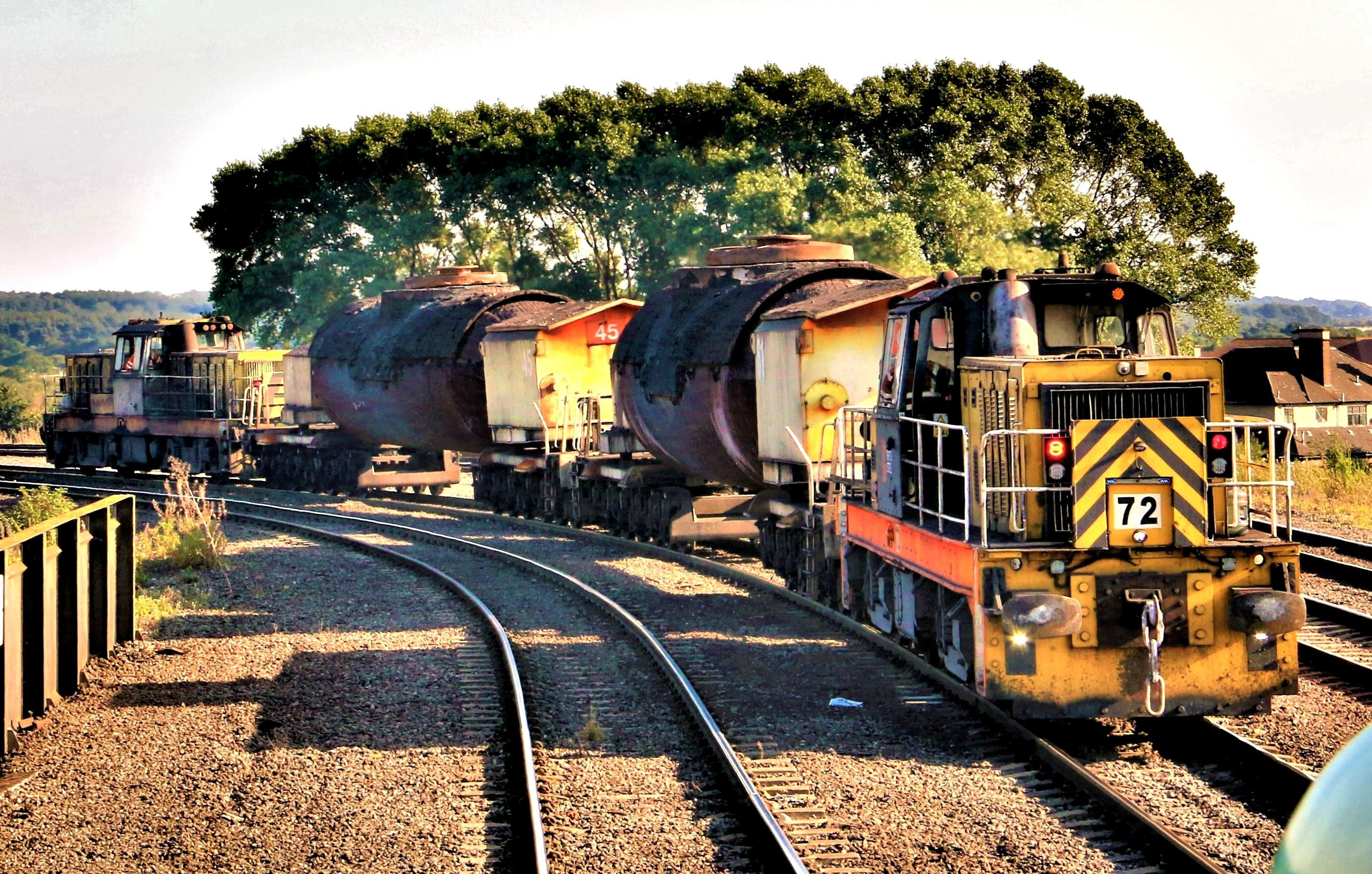 A hot (it was too) metal torpedo train approaches the BOS Plant.
[© Chris Ziemer 2019] 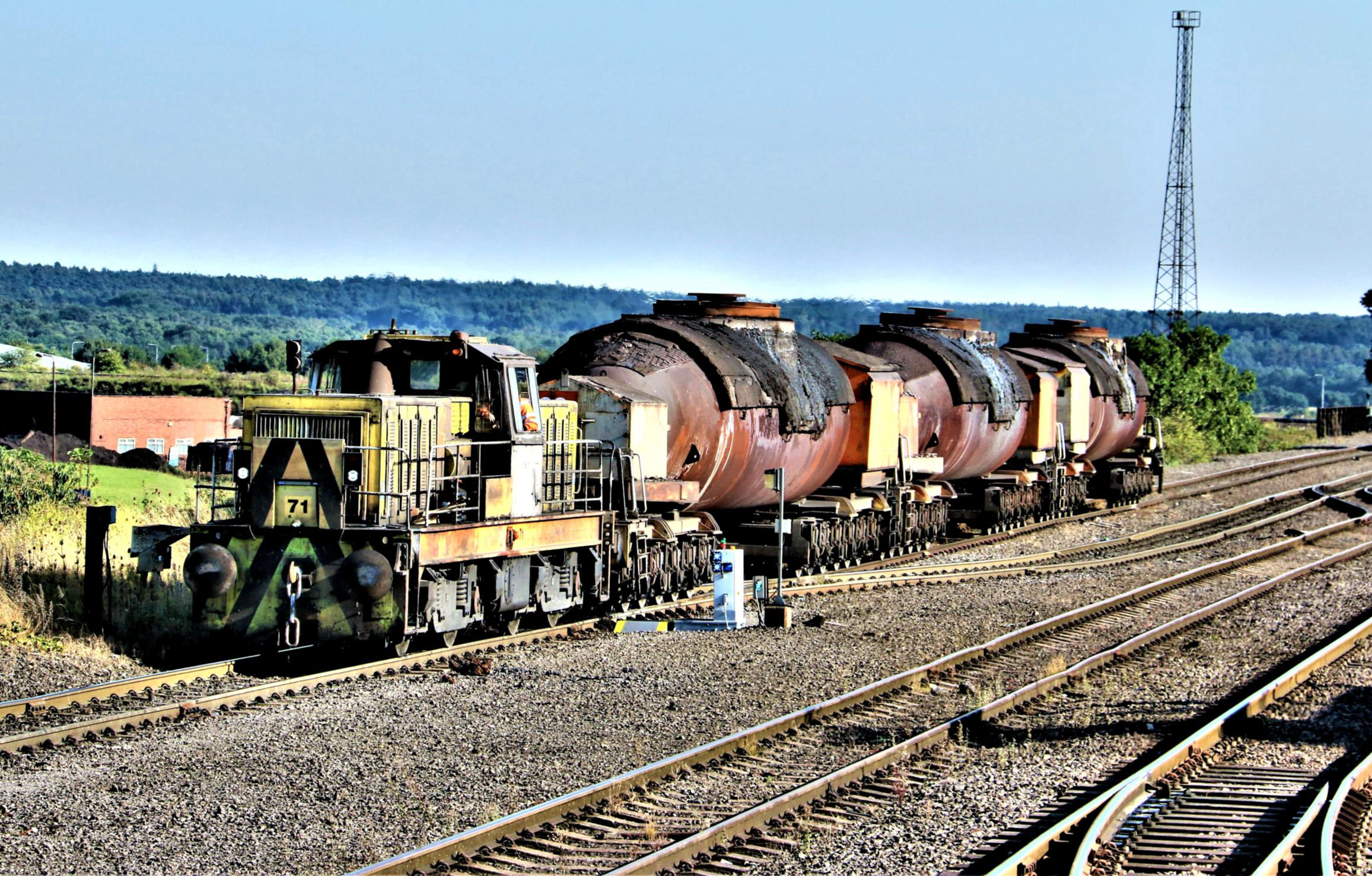 A single loco with three discharged hot metal torpedoes on the 4-track section by Bridge 44; that's an impressive number of wheels.
[© Chris Ziemer 2019] 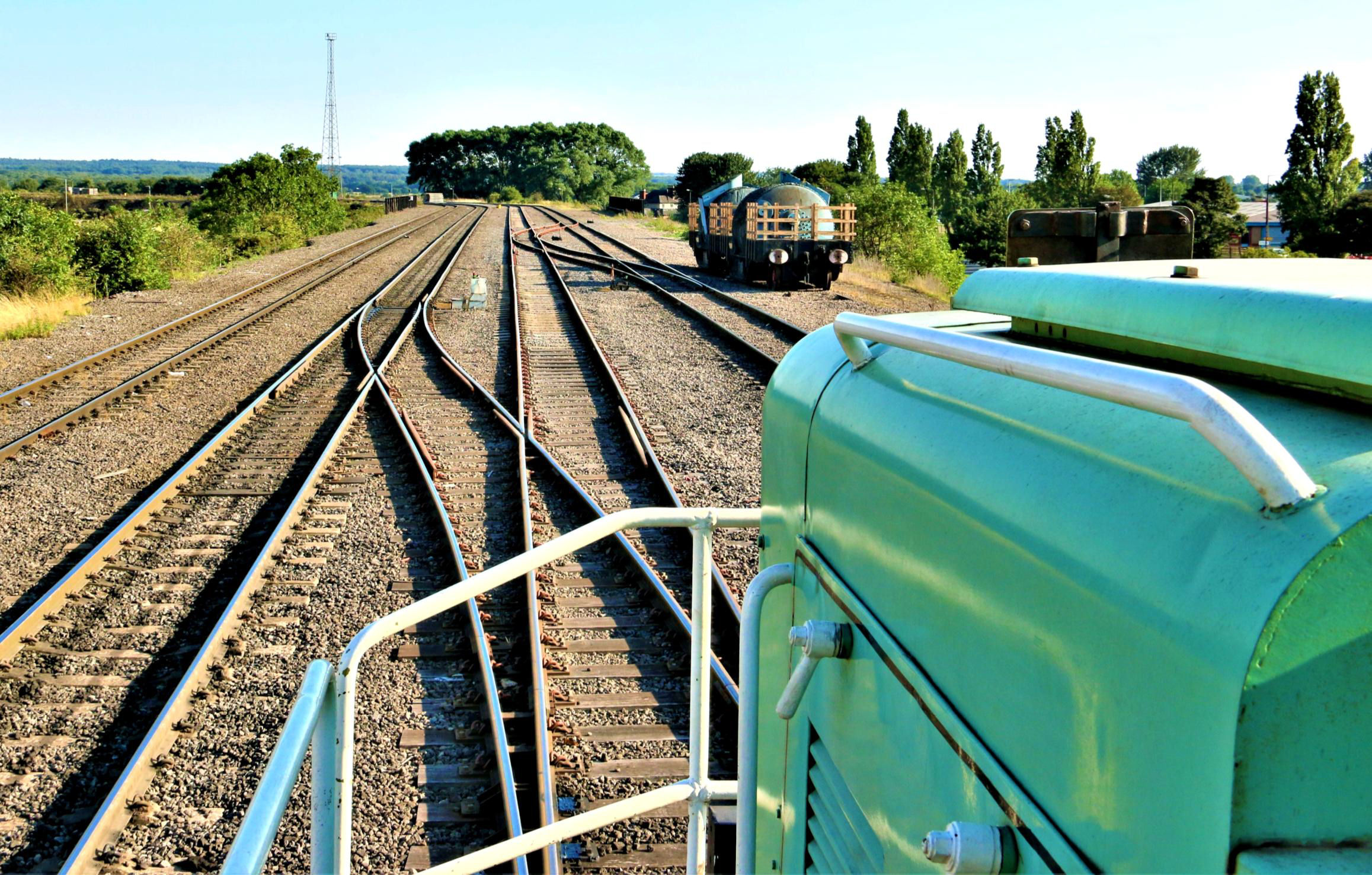 The three sets of points at Bridge 44 on the 4-track section; the two further away are the new ones.
[© Chris Ziemer 2019] 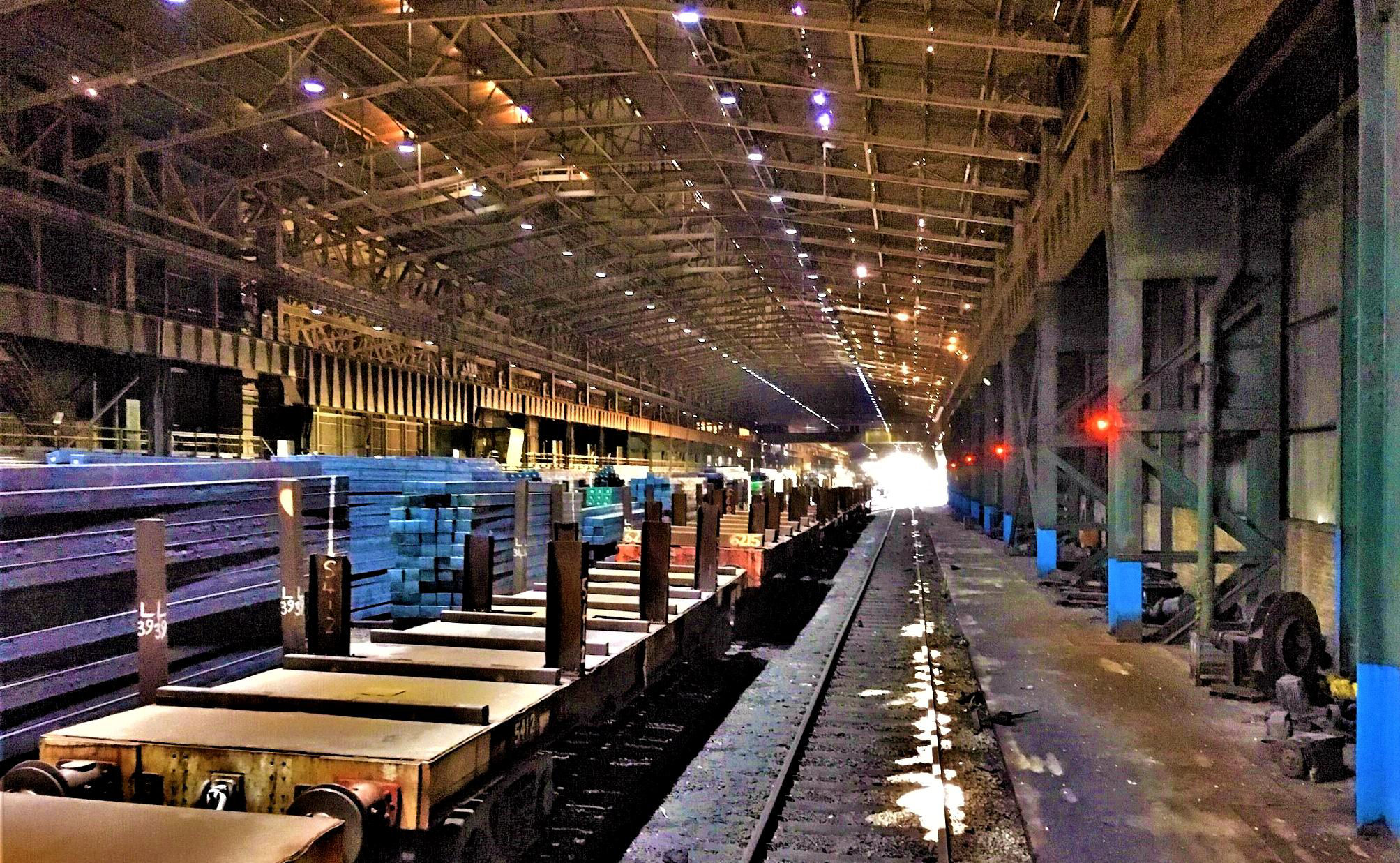 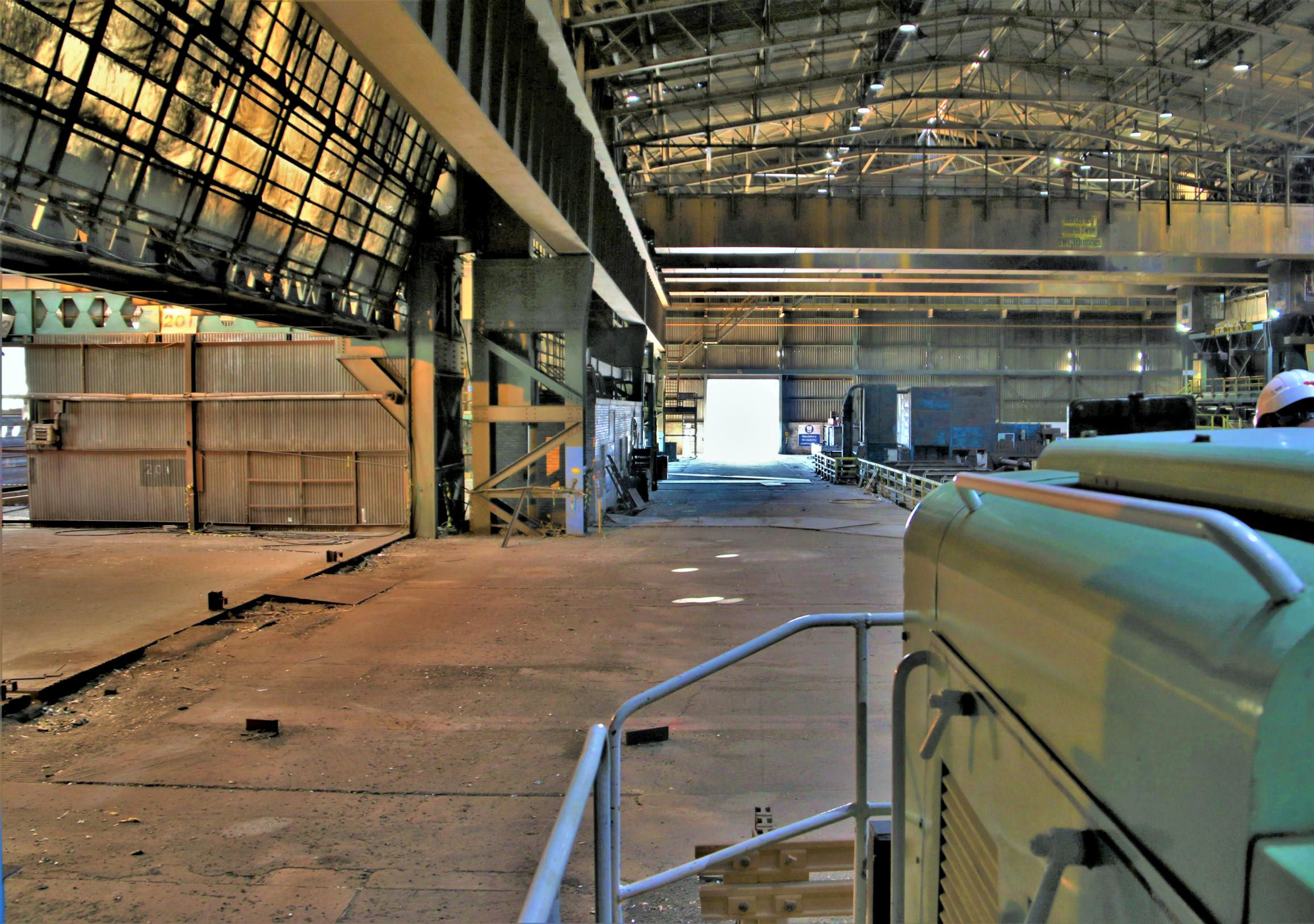 The same location from the loco end of the train, the buffer stops are bottom centre right; note the large overhead cranes.
[© Chris Ziemer 2019] 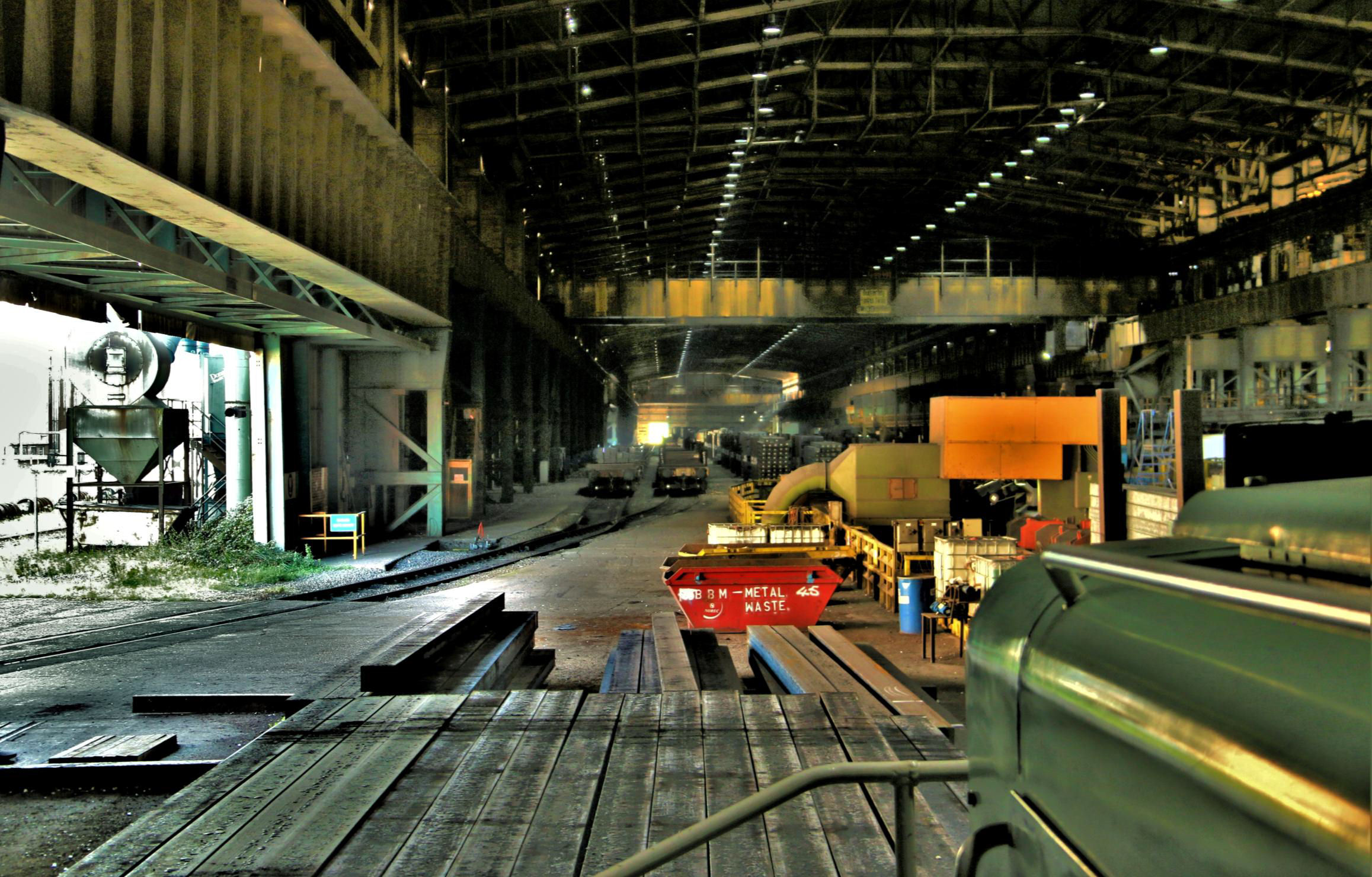 From the other end of our train, in the other direction, BBM3 right hand line. BBM4 is immediately ahead - both lines are occupied.
[© Chris Ziemer 2019] 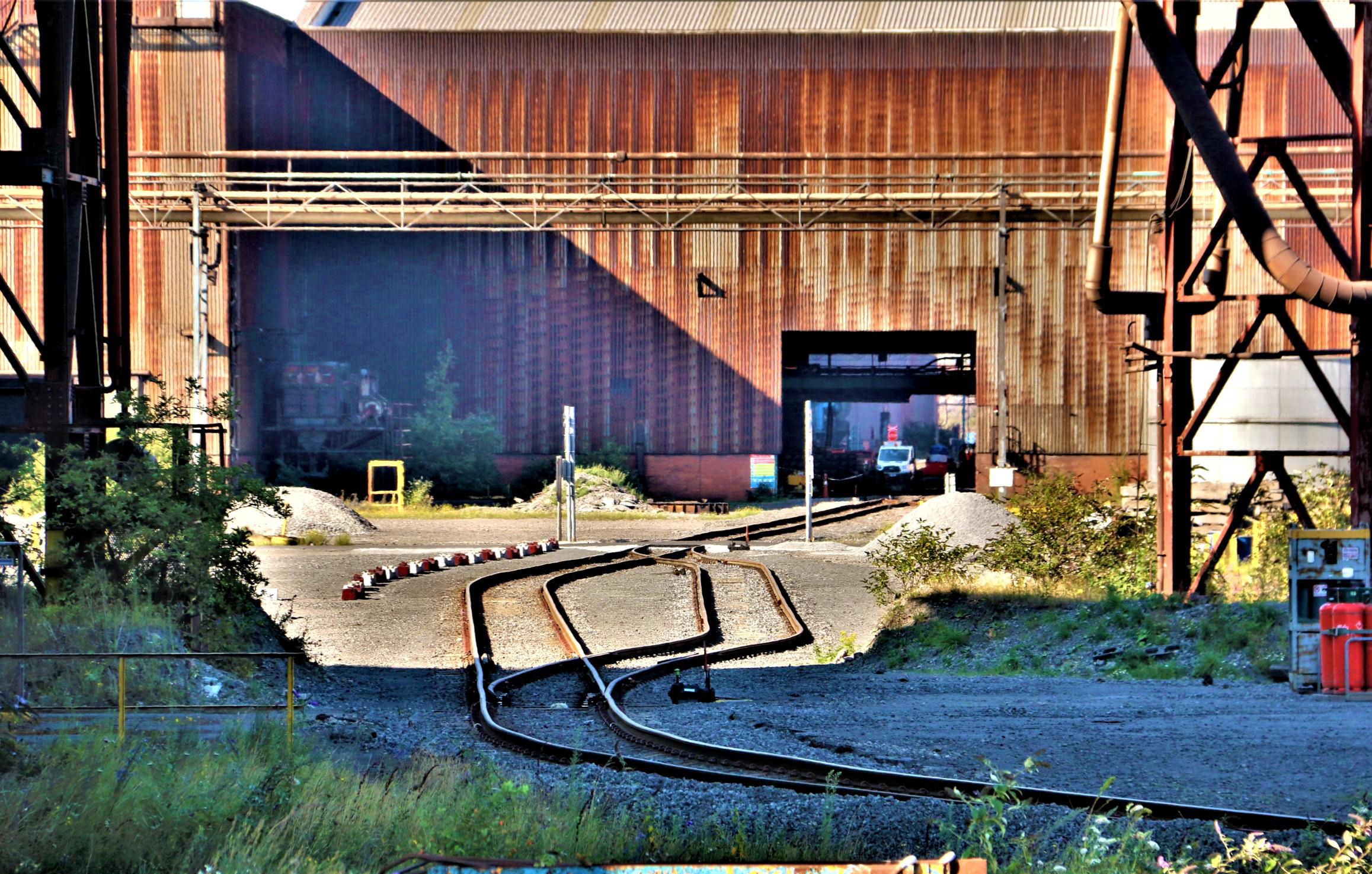 The new through line (with loop) was unavailable as the overhead crane above 'Furnace Road' in the building ahead was being worked on.
[© Chris Ziemer 2019] 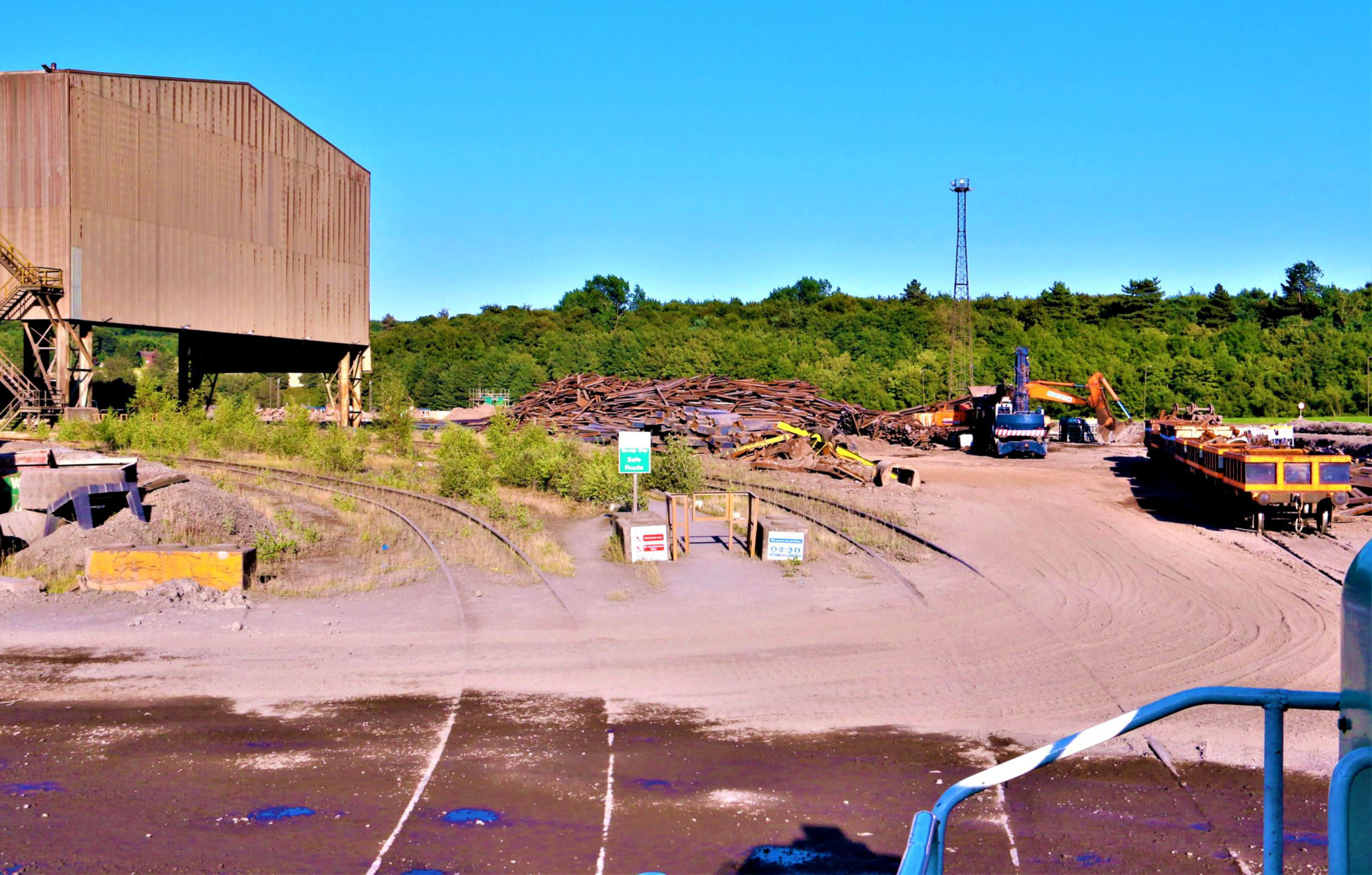 Ploughing through the debris filling up the tracks at this busy level crossing approaching the Scrap Bay at the southwest corner of the works.
[© Chris Ziemer 2019] 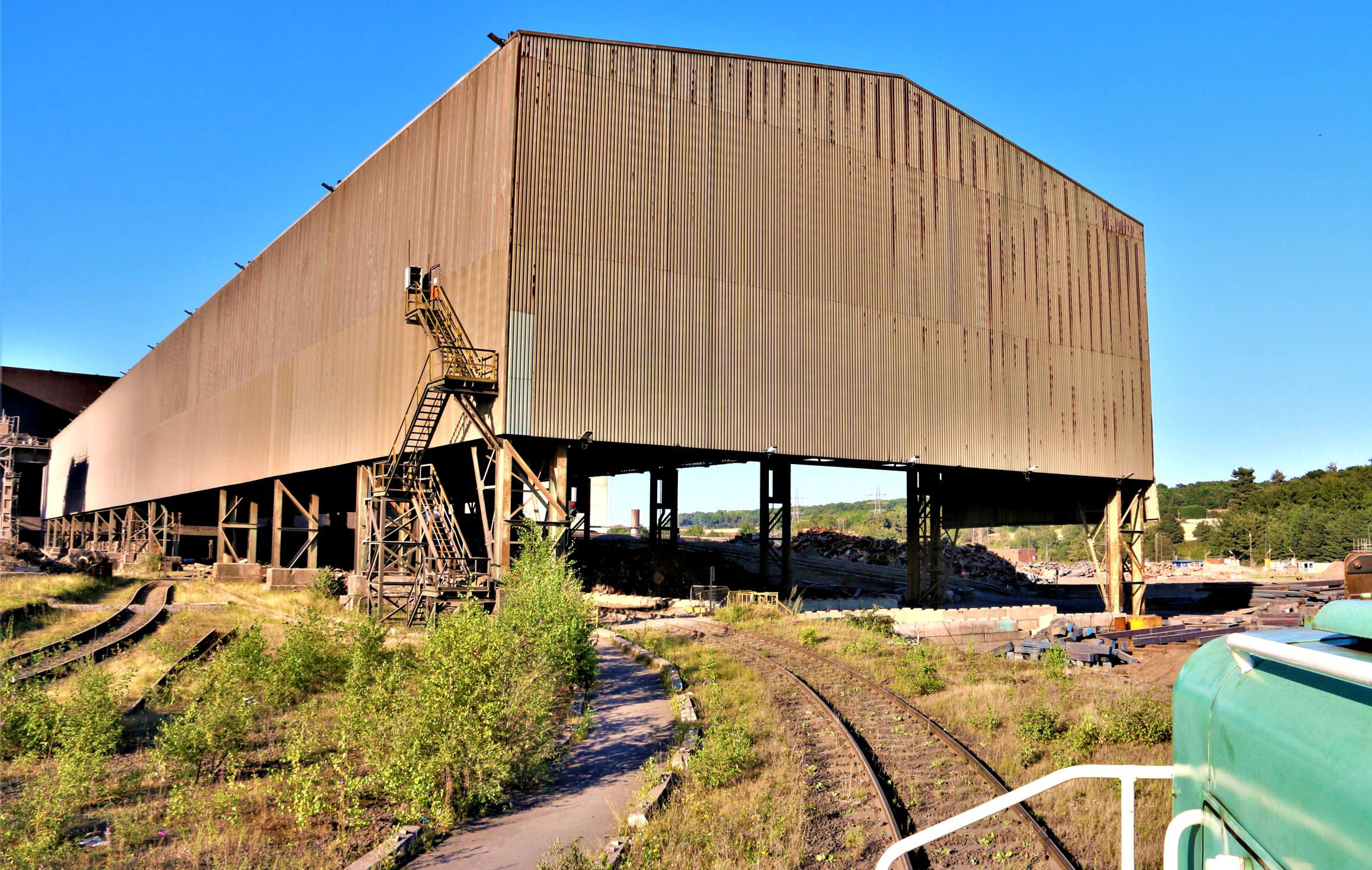 The Scrap Bay is another enormous structure, the door at the top of the stairs middle left accommodates a standing adult.
[© Chris Ziemer 2019]