30 members gathered at Pleasureland station Southport, for a most interesting visit (some staying locally had even managed breakfast). This traditional 15" gauge seaside railway dates back to 1911 making it one of the oldest in the country, and some of the original stock is in the terminus shed. It was opened that so we could view the stock and later a carriage of a more recent vintage was wheeled out to photograph. 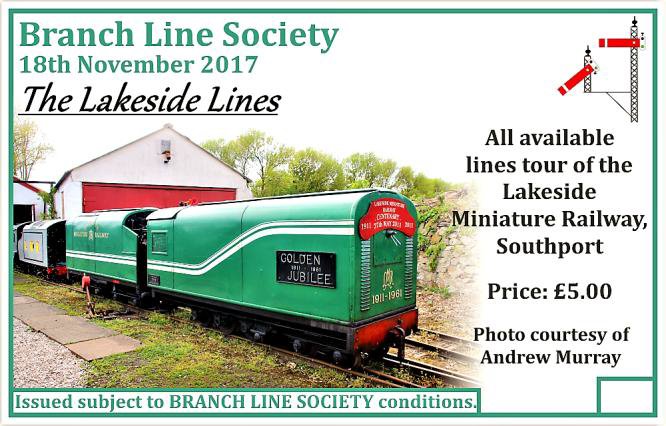 All track on the shed side of Pleasureland platform was (very) OOU; the point blades at the junction with the main line being bolted to the sleepers. This old carriage shed is destined to become a museum with some equipment, including the belt driven lathes, from the railway's workshops, being installed there.

Marine Parade station platform looking inland in the opposite direction to the picture below, the loco is on the run-round loop.
The track/loop for the second platform used to be on the right but you wouldn't know.
[© John Cameron 2017]

The morning's travels started with loco No.3, 'Jenny', hauling our train the length of the line to Marine Parade station. Here the loco was uncoupled and the stock pushed out of the way so that each participant could have a round trip in the cab to the end of the headshunt returning through the run-round loop and back along the platform road. Those with lower Body Mass Indexes were able to do this two at a time! The rails into the second (left) platform and its run round loop have been lifted, their junction with the main line plain-lined. The sleepers remain but are filled up with soil and grassed over, a dramatic fairly recent change. The station loop and track round the first bend almost to Princes Park (intermediate station CP 1948) has been relayed on ⅓ size standard gauge sleepers. The new owner advised this would continue each winter, but first he had to relay both platform surfaces. 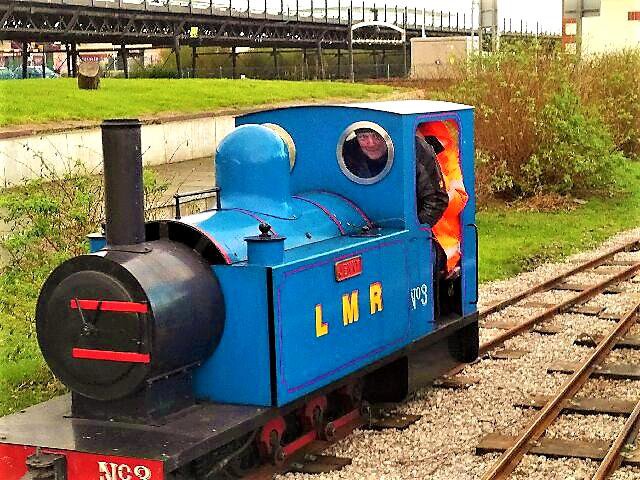 Looking towards the sea Mr Sheppard (smiling) sits on Mr Adlam's lap (but don't tell anyone!)
while doing the run-round loop at Marine Parade station, both riding 'Jenny'. The driver is on the
other side of the cab. The disused second platform is to the left; its track is now replaced by grass.
Southport pier (sadly no tramway operating these days) is in the upper background.
[© John Cameron 2017]

On returning to Pleasureland the exercise was repeated to cover the headshunt extremity and run round loop! Our sympathies to Owen Bramley, the owner driver having gone round his two loops about 60 times in all! The line's insurance does not cover passengers being propelled by a loco so the stock was pushed beyond the points leading to the sheds. Everyone managed a trip on a sleeper wagon along all five sidings and shed roads, full overlap being ensured thanks to people power! Our thanks to Owen for opening especially for us and we trust that his newly acquired venture will be the success it deserves to be. The 08.30 start was fully justified as there was enough time after to walk to Southport station for a Merseyrail EMU to reach our SGM and AGM comfortably without rushing. 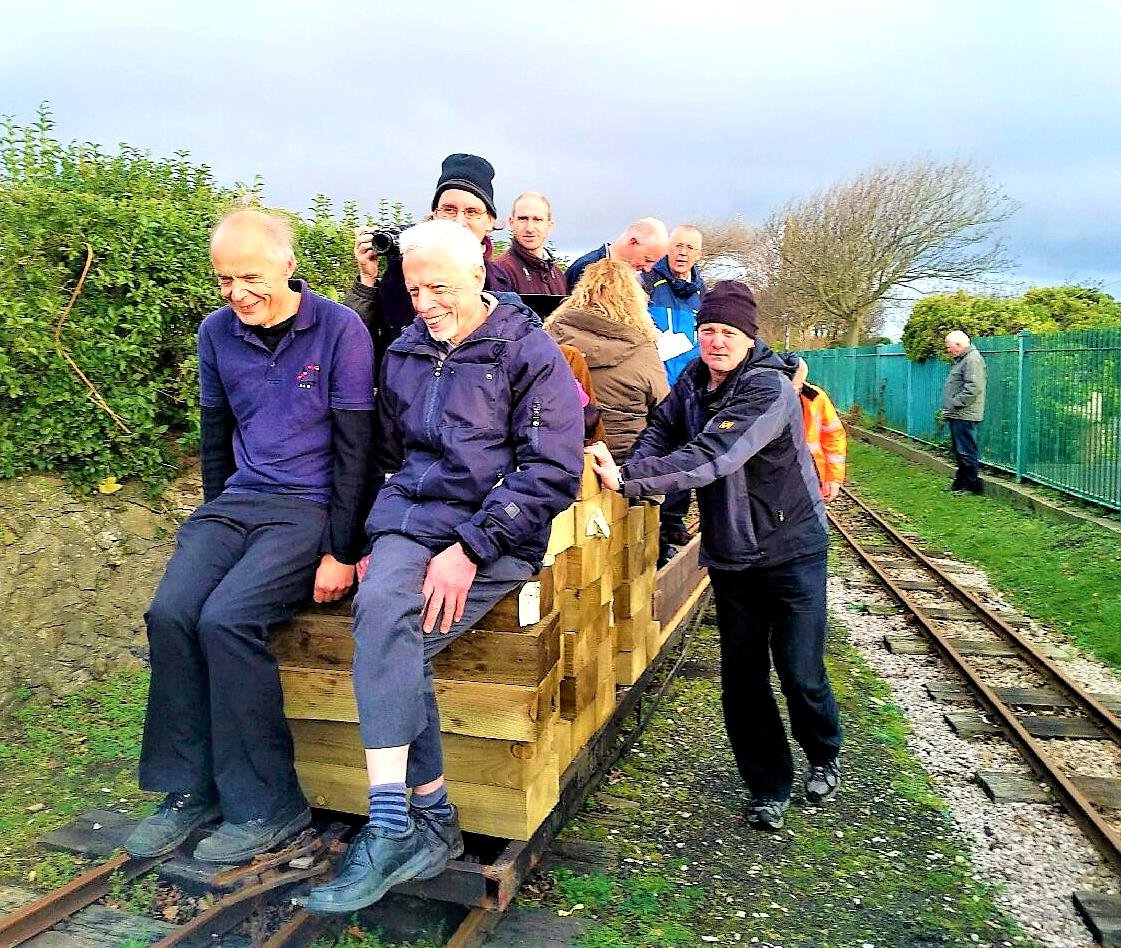 Some participants enjoy doing the shed road on a sleeper train which is kindly being guided by Alan Sheppard.
The running line is to the right, Pleasureland station is not far behind the camera.
[© John Cameron 2017] 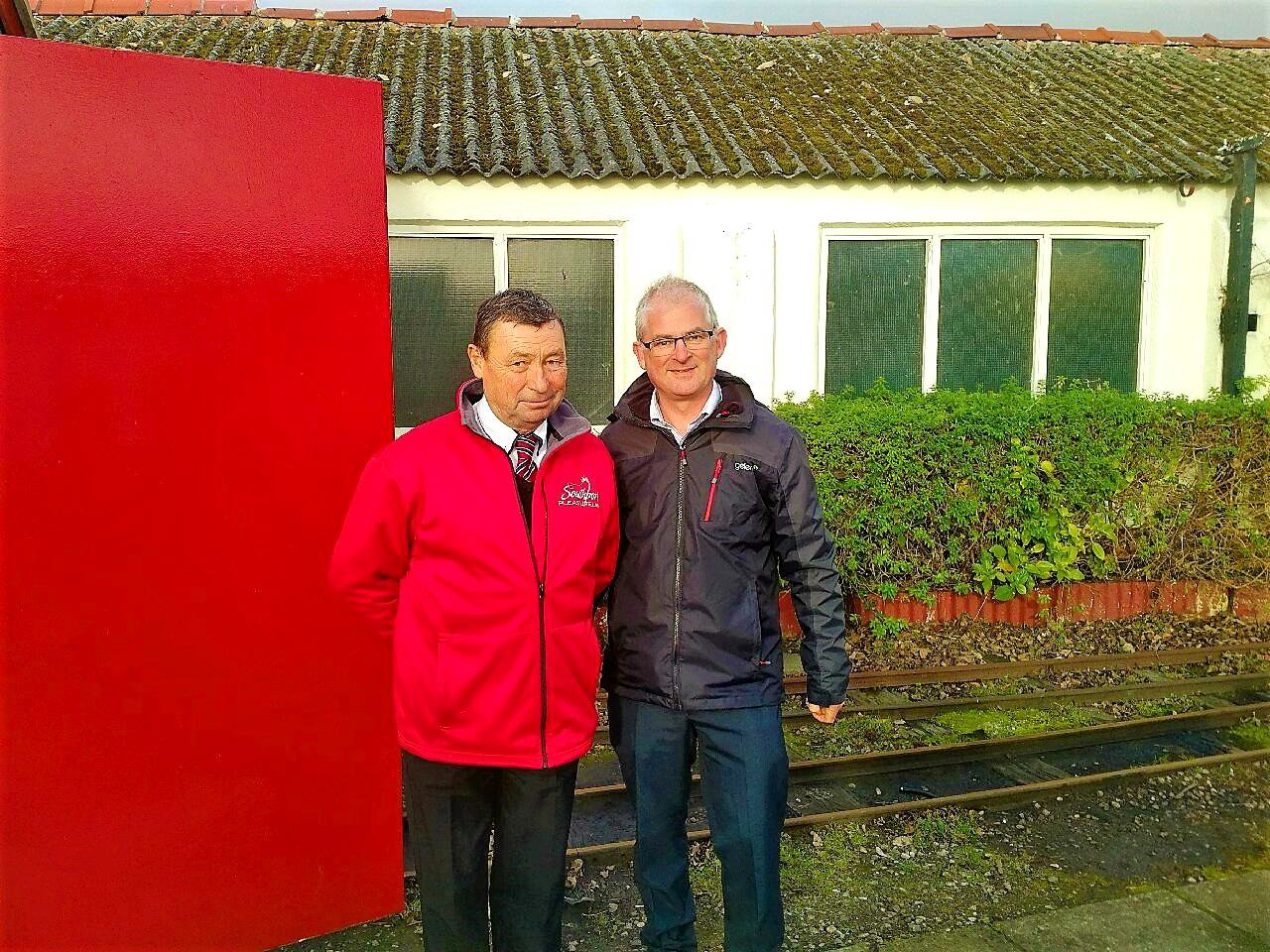