On a cold, and frosty morning at least in Malvern (or so your Editor tells me), 40 members met at the WLLR in Hesketh Bank near Southport for a visit which did all that was promised and probably a lot more. Copious quantities of bacon rolls, or baps in this corner of the kingdom, tea and coffee were available to purchase before we adjourned to our charter. This was diesel loco 'Tawd' with 4 open wagons (from MoD Eastriggswith longitudinal seating recently added especially) to reach the parts other rolling stock (normal passenger coaches) cannot reach. 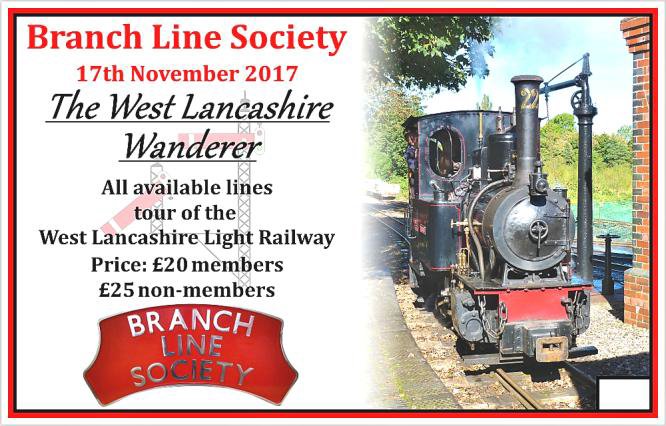 'Tawd' was waiting on Becconsall station run-round loop and at 09.15 began the day's travels by shunting up the headshunt to the buffer stops (of course). A quick reversal and we were off, via the run round line; the first of various trips along the line to Delph.

For those whose knowledge of the Lancastrian dialect is somewhat lacking a 'Delph' is a quarry and hereabouts the line onward was laid along the quarry edge. Unfortunately due to a slow landslip the insurers will no longer provide cover for trains further than the current Delph headshunt, even though the rails are still visible (and easily walkable) quite a way beyond a substantial buffer stop constructed of sleepers. No31, Mill Reef, then coupled onto the rear and took us back to Willow Tree Halt, the intermediate station, where it was uncoupled and 'Tawd' then shunted the train into the left hand siding there, the other one then being occupied. After leaving the siding Mill Reef was re-coupled and, leaving 'Tawd' behind, we returned to Becconsall platform and to the headshunt, overlap completed! 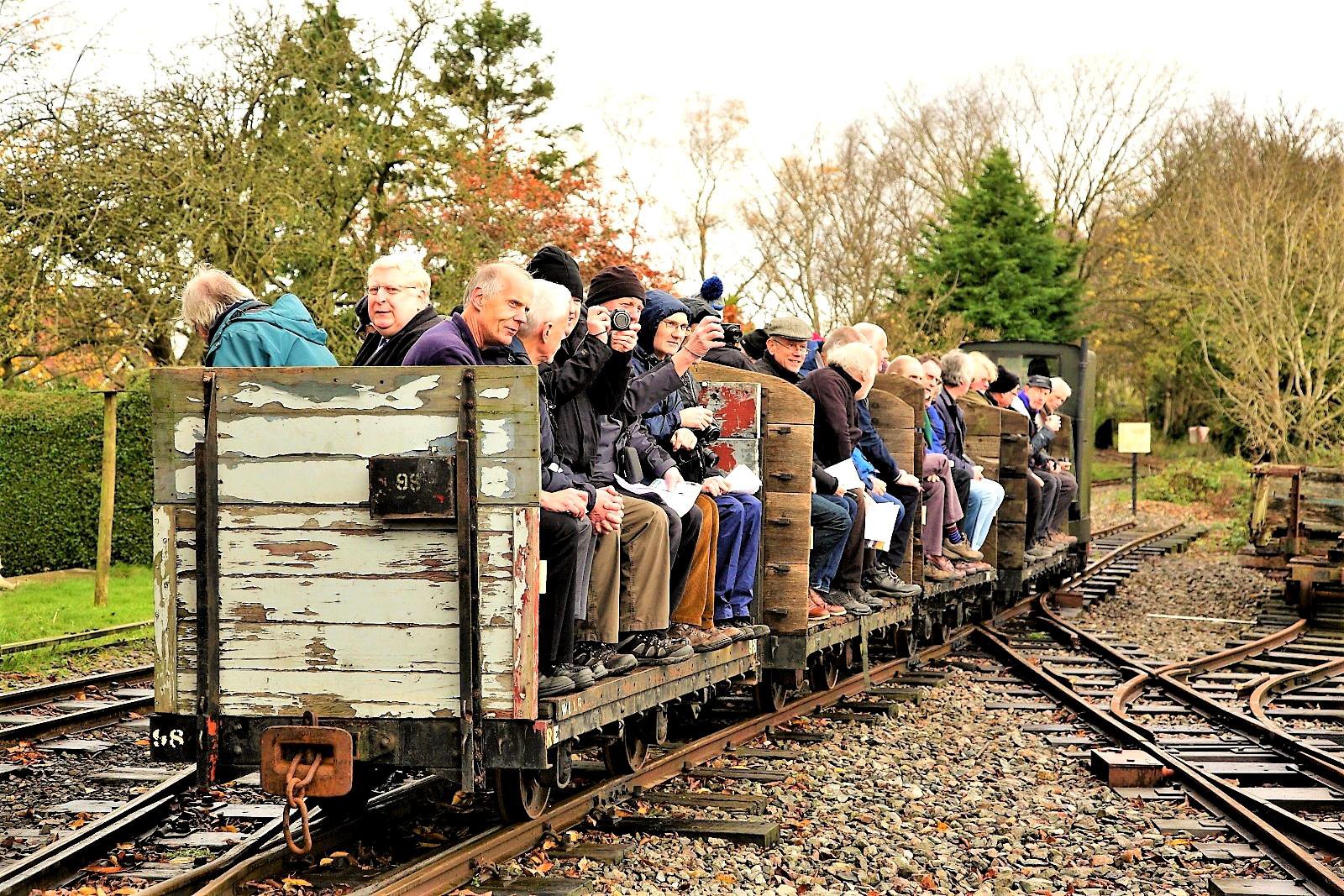 Our special train with the 40 participants on the West Lancashire Light Railway.
[© Alan Hart 2017]

Planet No.10, Ruston 36 and Mill Reef then provided the motive power for a comprehensive track bash of all available loops and sidings in the station area, except one short line where there was no way the point could be held in position and that siding was occupied by a couple of trucks anyway. What was absolutely amazing was the efficiency of the movements going on in the background. The railway has an extensive rolling stock collection (some of which even they wondered would ever move again - they did!), which had to be shunted to make every line available for us including even the turntable where everyone had 'spinnage'! Then another journey to Delph, to cover the run round loop there and return to Willow Tree Halt for the second siding brought us back to Becconsall. 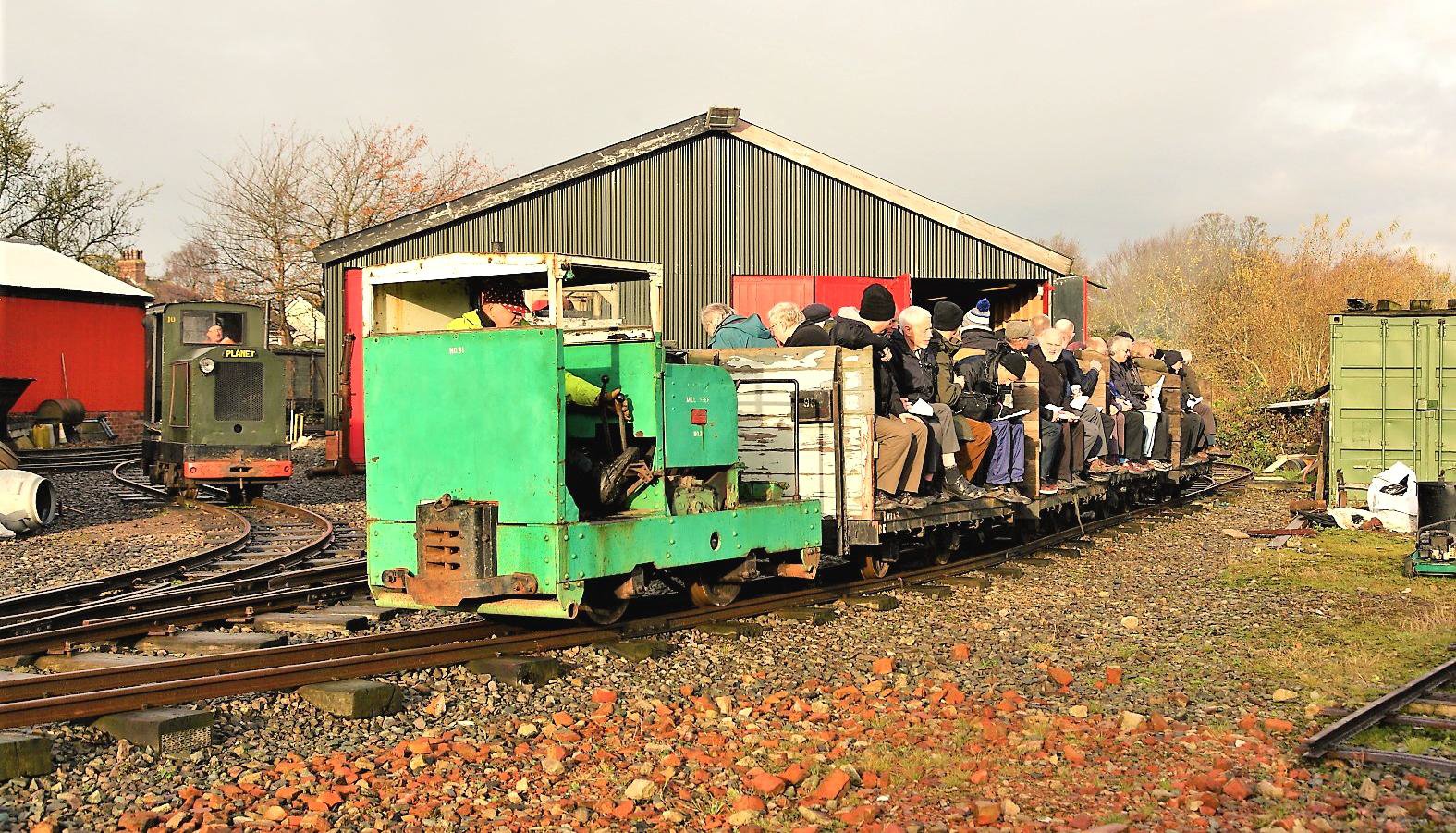 With everything out of the way, steam loco 21, 'Utrillas', brought the (remarkably wide and capacious for 2ft gauge) passenger stock into Becconsall for the final trip to Delph, then ran round and propelled the coaches back to the buffer stops for return. On arrival at Willow Tree Halt all those who wished disembarked and the train was shunted back up the line to the junction with the sidings line and then took part in a short run past before everyone rejoined to return to Becconsall. The haulage fraternity had a pleasant surprise when told that the guard's van was built on the chassis of a loco and some climbed aboard so it could be counted as such! Arrival at Becconsall for the final time was at 13.05. 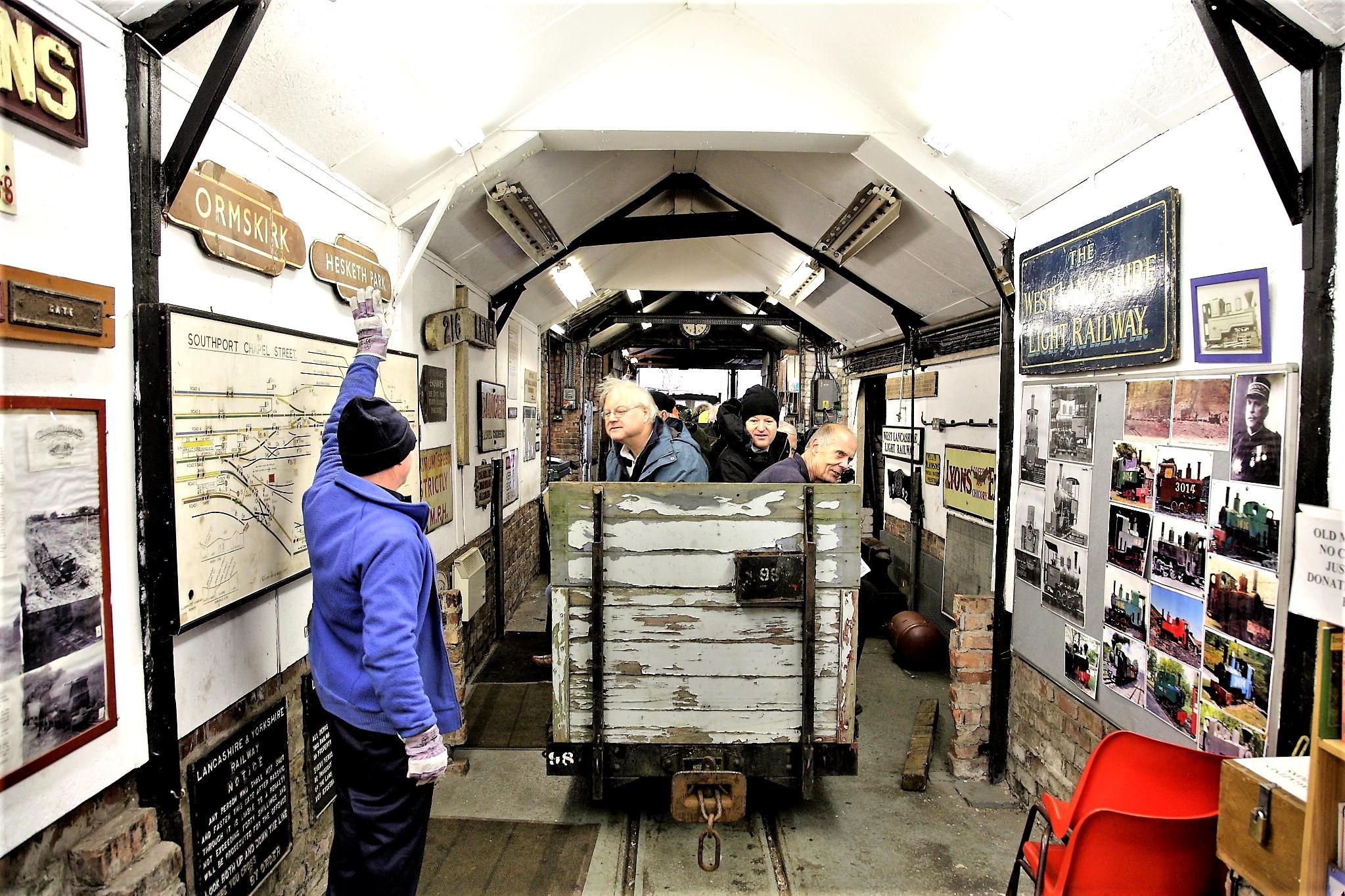 We've just come to inspect your artefacts (a likely story) - for the record the very end of line was reached
after a few obstacles were cleared (with permission of course).
[© Alan Hart 2017] 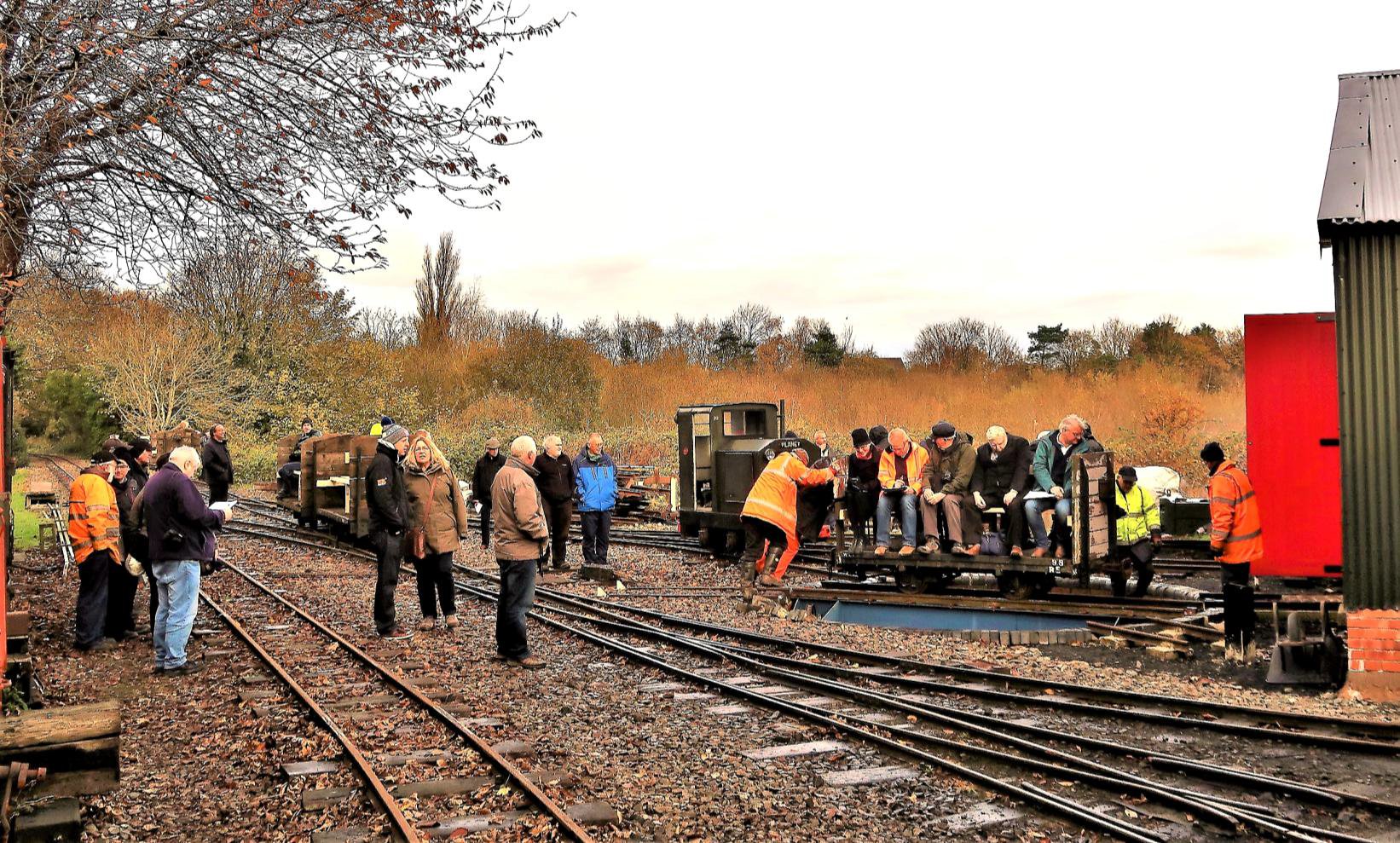 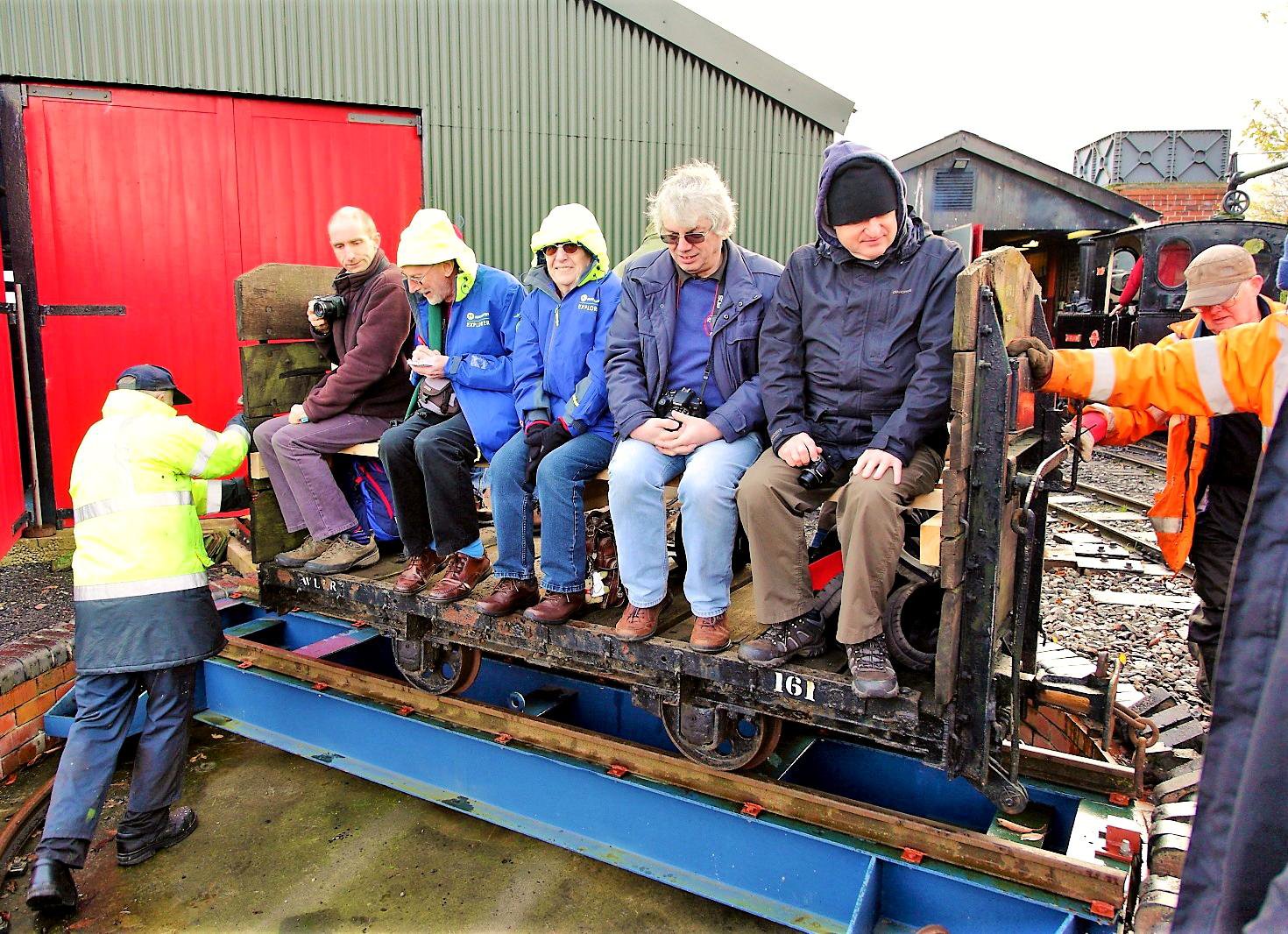 Left to right: members from Daventry, Laxey IOM (two), - at least occasionally, New Malden and Coventry
enjoy spinnage on the turntable. Our Chairman notes down the haulage.
[© Alan Hart 2017] 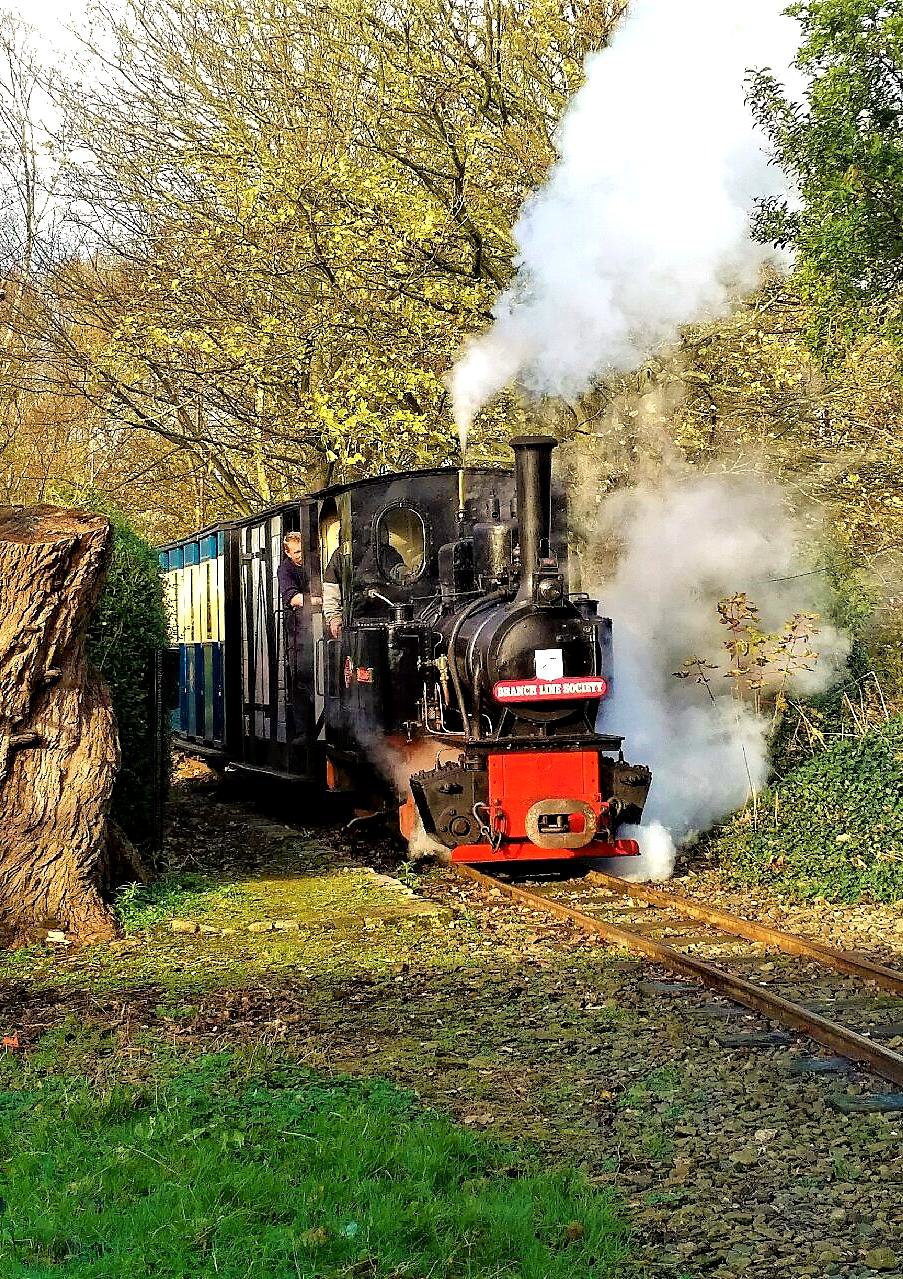 This is a 2ft gauge railway that is well worth a visit and be warned, you may have to do this in the near future. It appears that since the railway was first built on a green field site over 50 years ago they have been on a recurring 6-month lease from the local brickworks/builders merchants. Unfortunately there has been an application to the local Planning Authorities for residential building on the land so things will be changing. As an aside, the railway's current toilet block will end up in someone's back garden (so if you need it…)! The WLLR is attempting to raise funds so they can purchase the land they run on, whether through donations or loans, otherwise their future may be somewhat insecure. Sincere congratulations to the WLLR, especially the Operations Manager and Alan Frodsham, for the way they managed our visit, nothing was too much for them; virtually every inch of track covered with 6 locos! 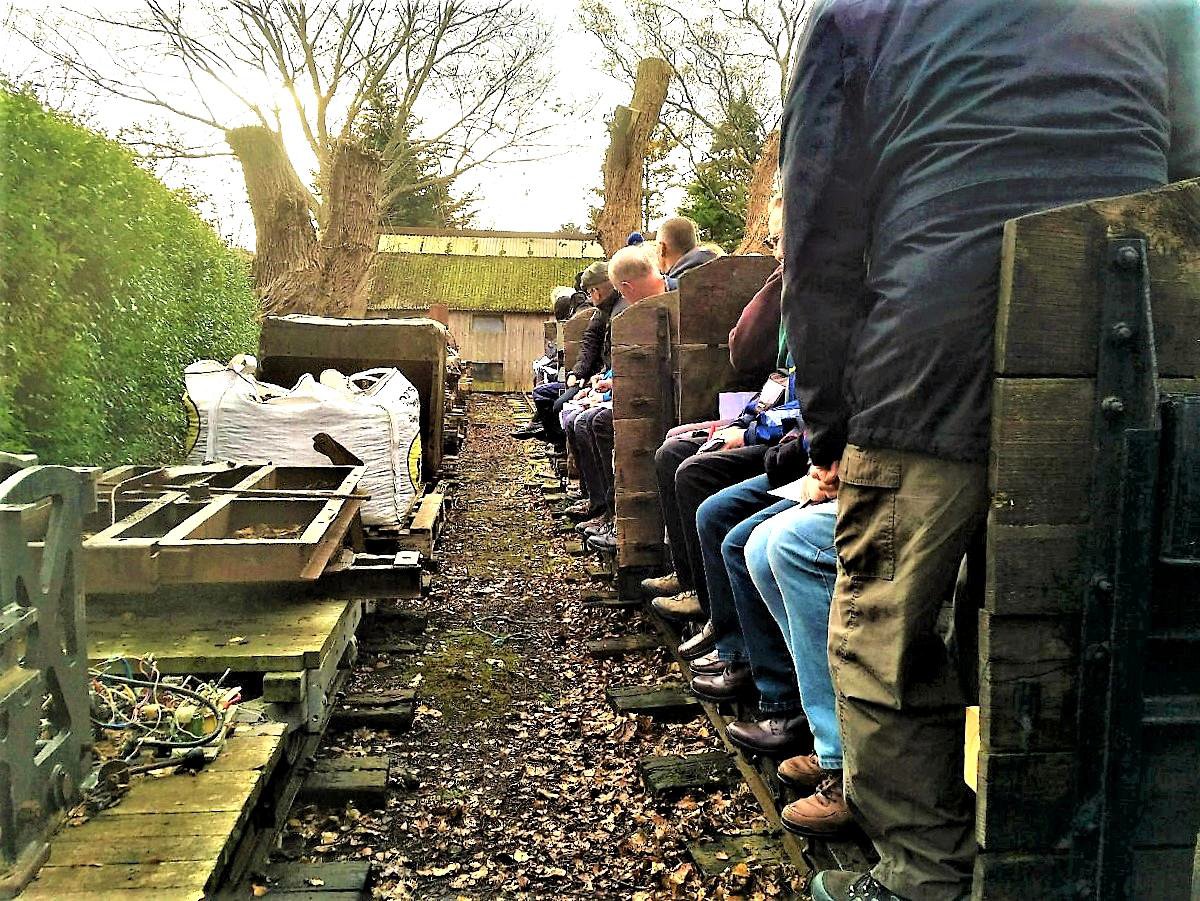 Willow Tree Halt right hand siding; participants keenly focus on the end of line - this stopped in front of the shed as did the train.
The left side had been done earlier in its entirety.
[© John Cameron 2017] 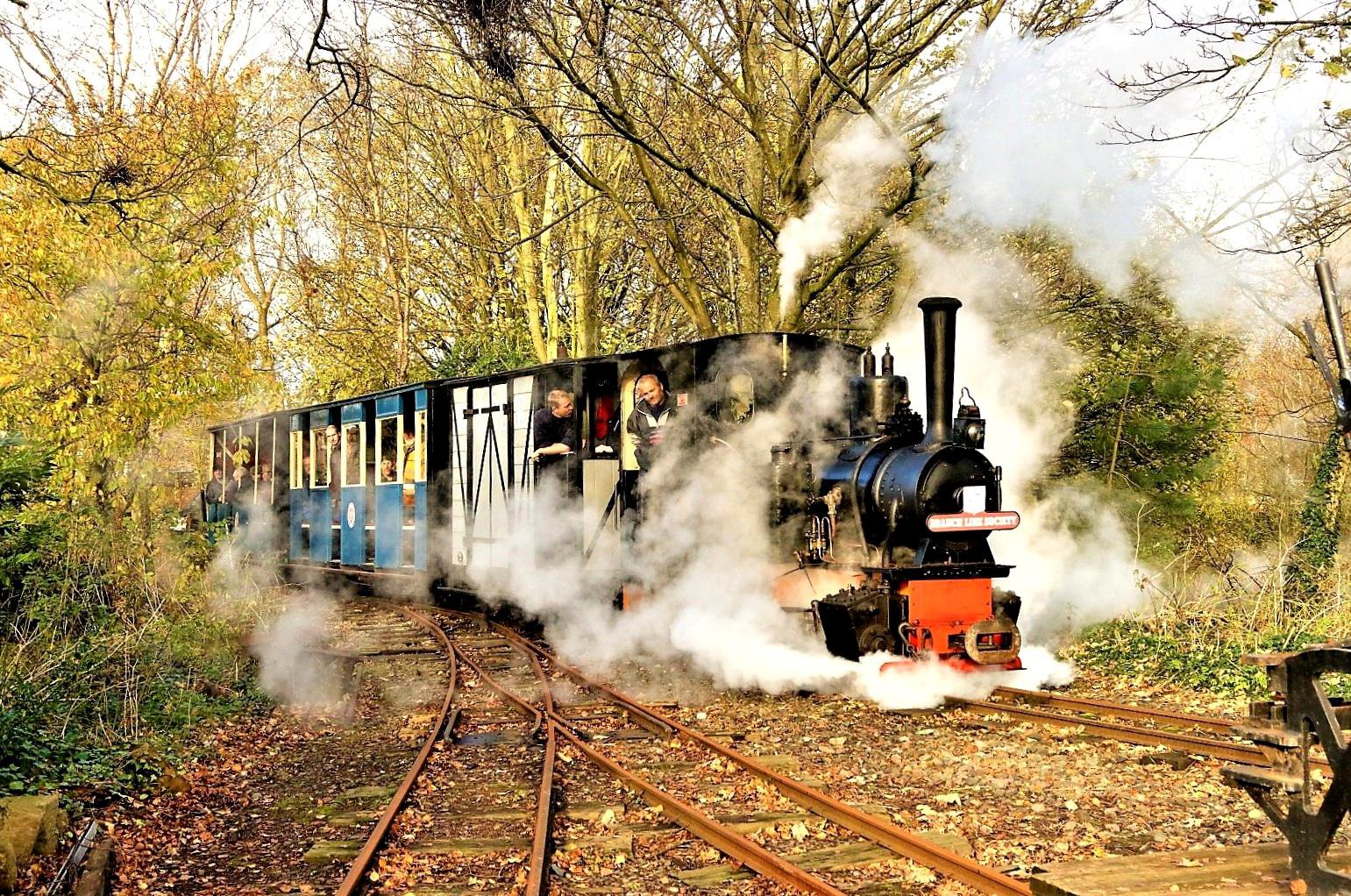 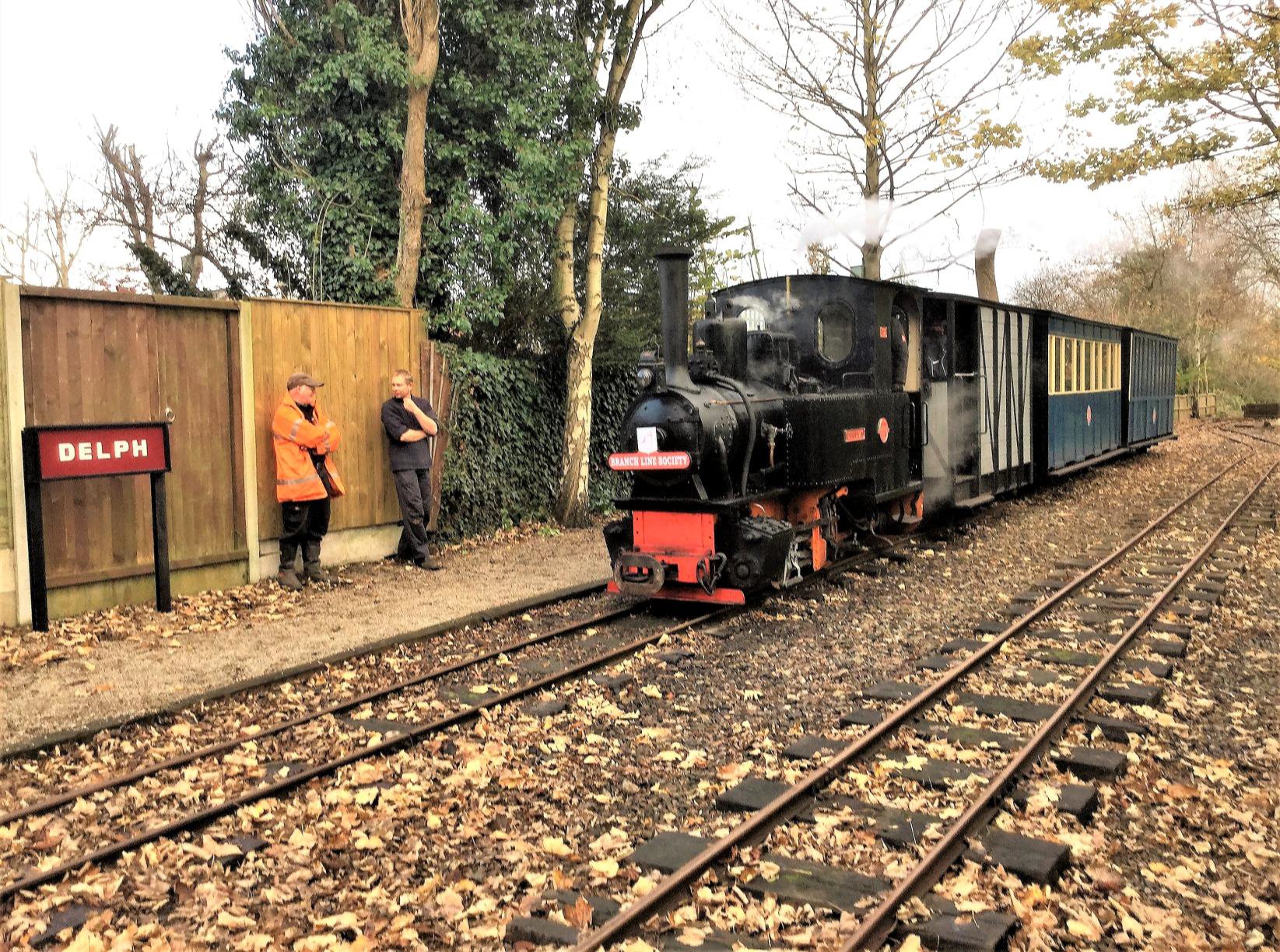