The 18 participants arrived for 14.00 at the 70 acre Stafford Country Agricultural Show Ground after the morning Baggeridge visit. There was a Dolls House show on and the railway was eventually found tucked away in a rather secluded northern corner. It is only has public running once or twice a year during the main showground events. A 2015 extension has converted the layout from a 250yd oval in to a 590yd dumbbell. Waiting at Stafford & District Model Engineering Society's Bagnall End station was 0-6-0 TT WB No6 'Waldenburg' in green livery with three blue sit astride coaches, its driver and guard as well as a signalman for the 5"/7¼” ground level line. The loco is a scale model of a narrow gauge tank loco built by SLM in Winterthur [2276 of 1912] for the Waldenburg Bahn; the prototype is preserved in the Swiss Museum of Transport, Lucerne, and it performed admirably throughout the afternoon. 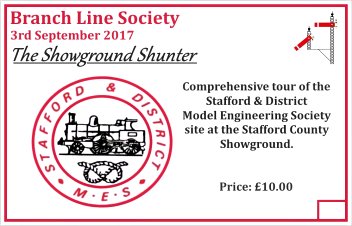 The 5"/7¼" ground level layout is fully colour light signalled, including track circuiting on the running lines, controlled from Bagnall End station signal box. Unfortunately no loco was available for the 3½/5" elevated line. The intention was to accommodate us on one train to simplify operations initially. As participants arrived it was obvious three coaches wouldn't be enough and a fourth was hastily extracted from a carriage shed. To warm up the loco, and to gain momentum to climb up the steep connection to the new extension, a couple of anticlockwise circuits of the original route were made which was in the relative shelter of a wooded glade. Then the tour proceeded out on to more exposed ground along the perimeter of the showground field to Queensville station, the end of the 2015 extension. After a quick run round, the loco using the turntable at the end of the line, the train proceeded back to the shelter of Bagnall End thereby completing the public running route.

After a short wait more serious activity began with a warm/speed up circuit then out onto the moor to Queensville again. The loco was released, via the turntable and moved down the release road. Then the rest of the train was systematically routed, one coach at a time, via the turntable (including a full spin) and headshunt, shunting the whole middle loco stabling road - only accessible from the turntable - to join the engine on the release road. Naturally the passengers stayed aboard their respective coach during this manœuvre…! Once the train was complete it set off along the release line (which can only be accessed from the turntable end due to the spring point the other end). Queensville 100% covered!