Well known for his Scunthorpe Steel Works exploits, this was local Hull member Alan Sheppard's first time in organising a programme of events on behalf of the Society. Spread between two Ridings of Yorkshire, the first location where we met at 09.00 was the 7¼'' gauge Wolds Way Lavender Railway in Wintringham, east of Malton. This railway holds a particular distinction in that despite its obvious status as a tourist attraction and gauge, it is a genuine working railway actively engaged in the harvesting of lavender for use in the production by distillation of lavender based health products etc. 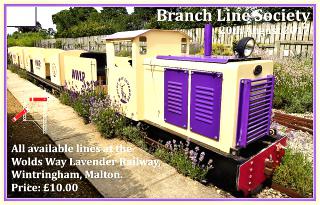 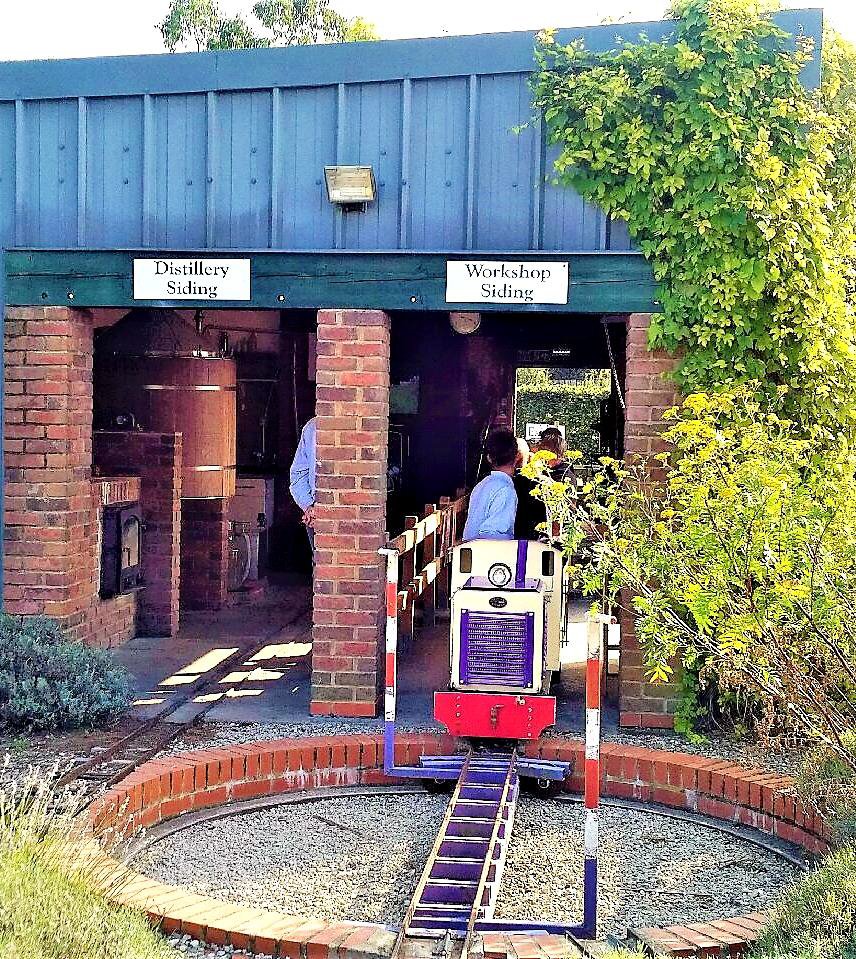 Wolds Way Lavender Railway, A 'still Life' view from the platform in the direction that passenger carrying trains don't normally run with
some very helpful signs above the lines. The Lavender Oil production equipment is 'still' on the left but would be working again next day.
[© John Cameron 2017]

The small group of participants was split into two groups and the first group joined the train at the appropriately named Grosso Junction (Grosso is a variety of lavender) station. The two sit-in coaches were also named after types of lavender: Nana Alba and Miss Kathrine (sic). Traction was provided by a Roanoke 0-4-0PH with works number 0502019RS2. The first move was to propel the stock into Platform 7¼ and, after the doors had been opened, into the Workshop Siding from which it was possible to see an embryonic Bagnall 0-4-0ST plus tender. Comprehensive coverage was achieved by a series of reversals using the crossover and traversing the Wood and Distillery Sidings and as much as possible of the Flower Drying Siding.  A forward move was then made of the station area to cover the length of the Hopper Siding; the hopper is used to fill the wagons with cut lavender. During this move, it was possible to observe the formation of a section of line going straight ahead from the junction of the Hopper Siding, the former passenger run taken out of use in 2011. The train then took the main run and return circuit from which it is easy to see the lavender fields. Adding to the incongruity of this particular railway, it then reaches a spring-loaded junction where all trains veer to the right and pass through a tunnel of 'Minor Railways' style construction. The route then circles the Nature Pond, and eventually heads back to the station area. The second party (and a three again from the first - yes they did each pay twice) boarded the train, and followed exactly the same route. After the railway activities had concluded, the party were treated to fresh scones and hot drinks in the Tearoom. 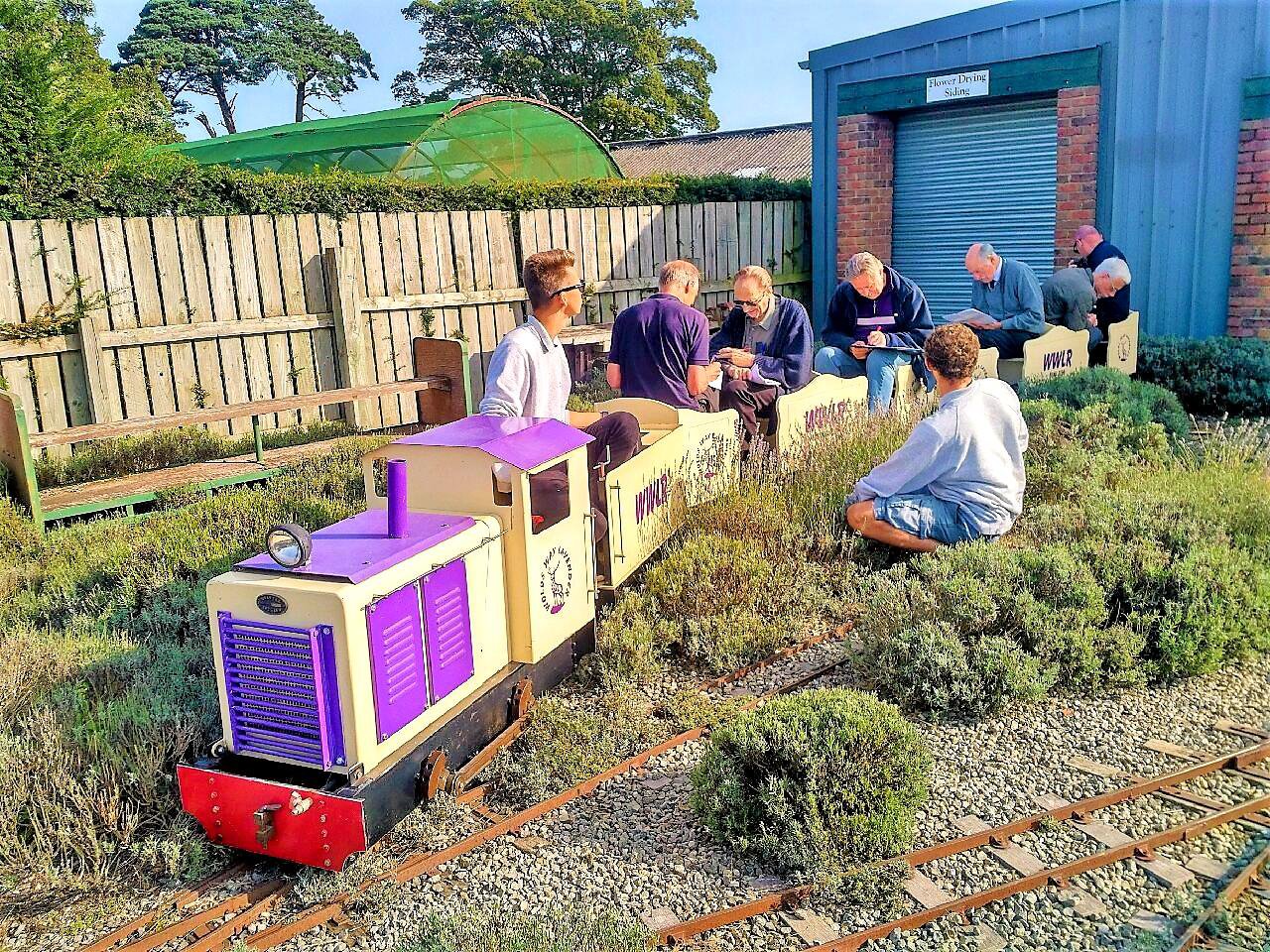 The first group in Wood Siding between the Distillery Siding (off picture right) and the Flower Drying Siding (left).
It was difficult to see the wood for the lavender. In true BLS tradition (nearly) everyone is meticulously noting down every last detail,
perhaps purple pens would have been more appropriate here than the traditional red?
[© John Cameron 2017] 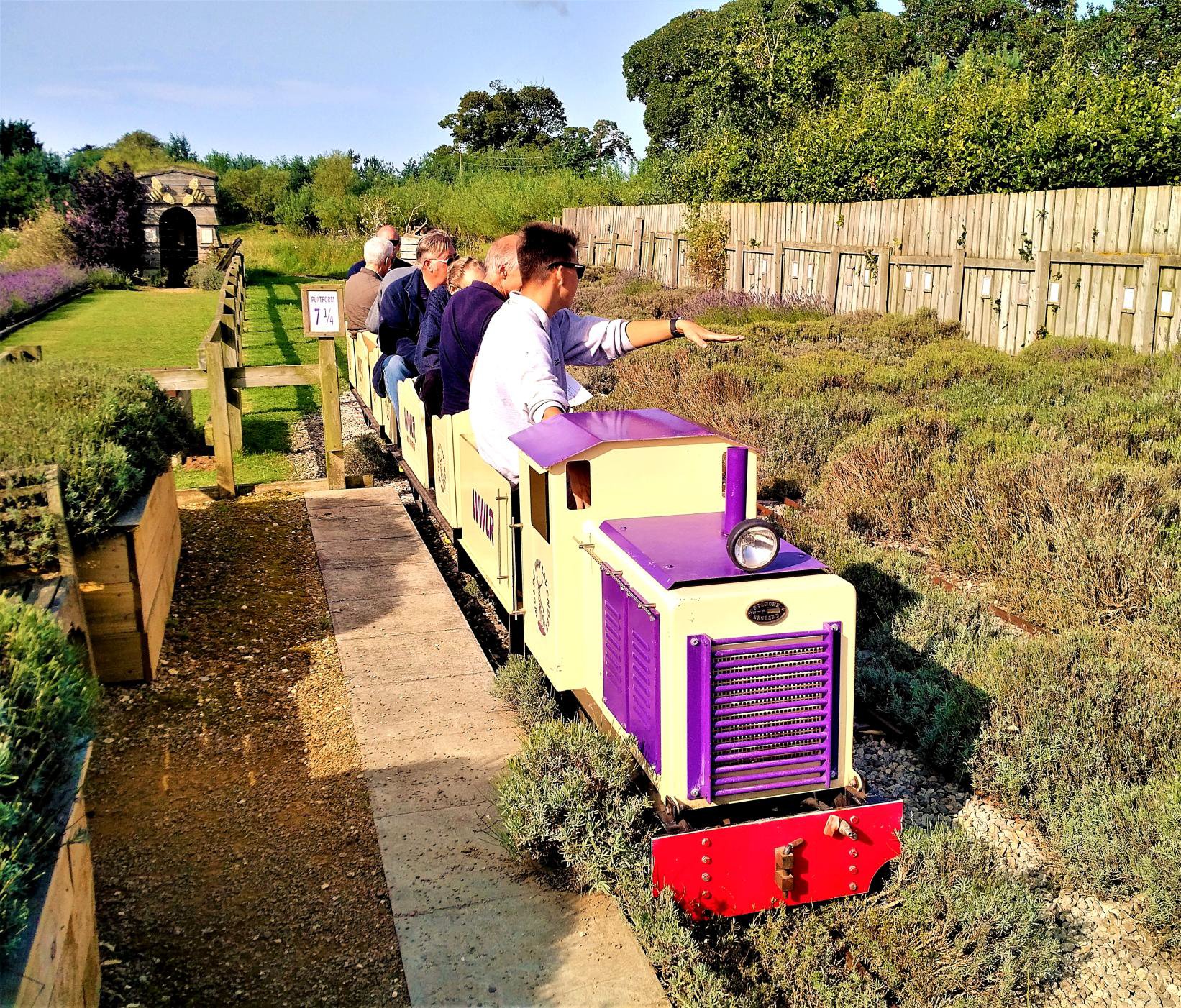 The second trip heads away from the station, in the opposite direction, towards the Hopper Siding (which is off to the right beyond the train).
Garvan, our driver, is pointing out some of the many different types of lavender and the train is actually running through lavender.
The observant will have spotted three members from the first trip and that they have changed ends for some reason.
[© John Cameron 2017]

A move to East Yorkshire saw the group arrive at the standard gauge Yorkshire Wolds Railway a little to the southeast of, and on the opposite side of the road to, the original Sledmere & Fimber station. There is only one locomotive here 0-4-0DH GECT5576/79 one of a trio originally supplied new to the British Steel Corporation Shotton Works. This was not officially a BLS fixture,as the railway was open to the public, but it soon became one! There is only one short section of track, initially traversed in the cab of the loco by all of the group, but stopping short of the end of the line. It become immediately apparent to the organiser that there was scope for a little extra track at the north end of the run, and a little persuasion (bribe?) with a generous donation achieved the sought after end of line for all. During the subsequent lunch break three of the party explored parts of the Malton to Driffield line (CA 1958) including Burdale and Burdale Tunnel, Wharram station and the site of the quarry sidings. 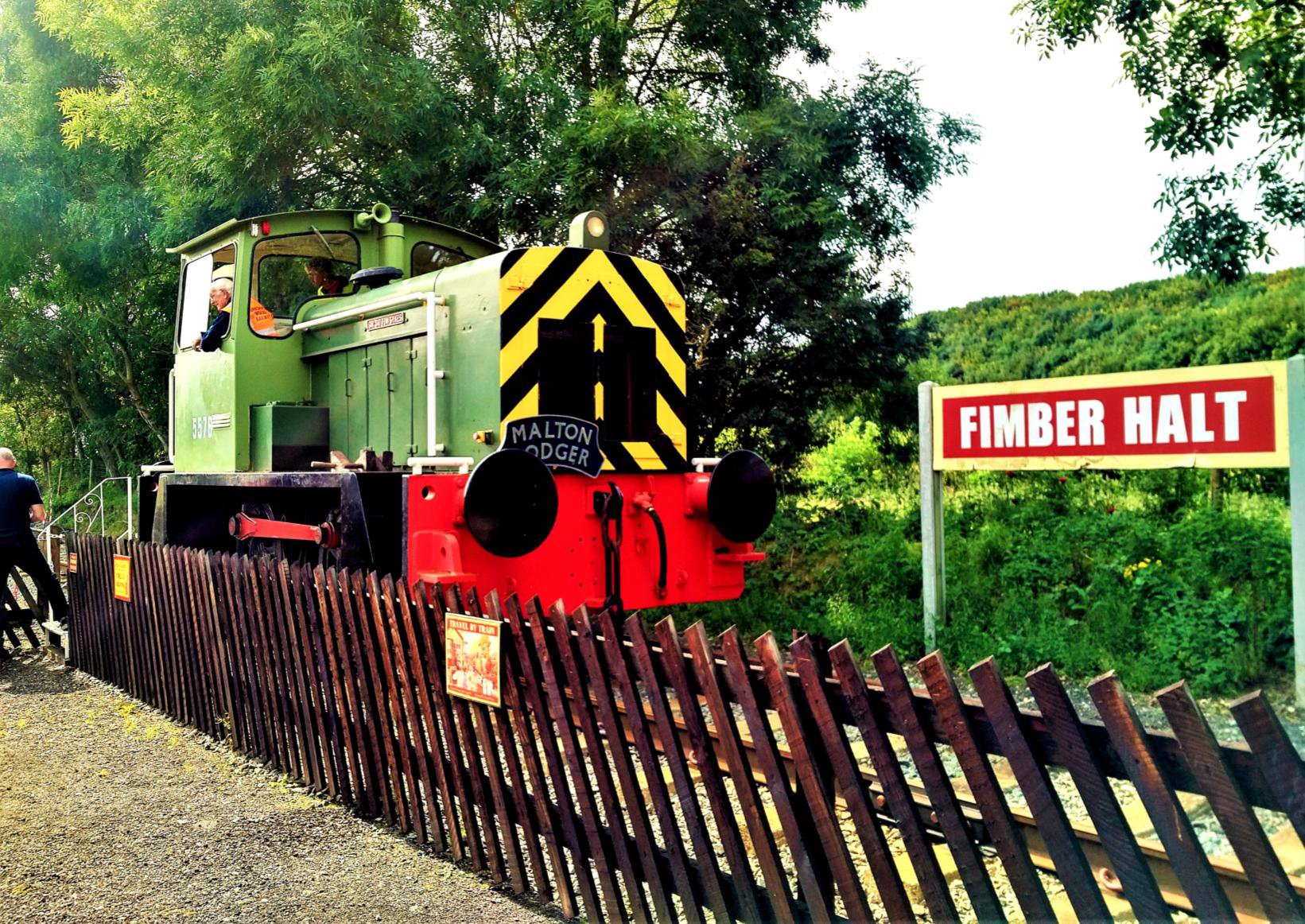 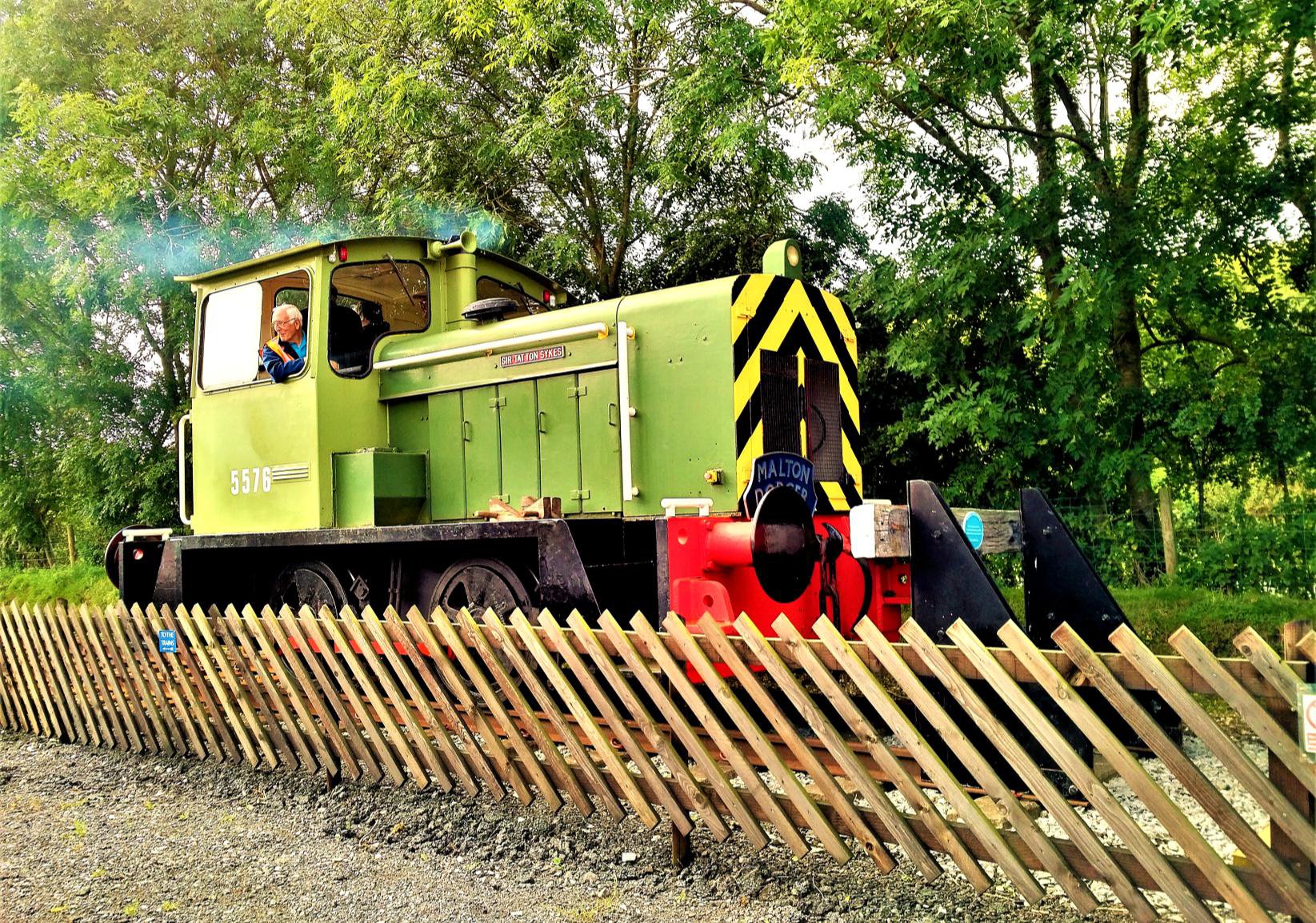 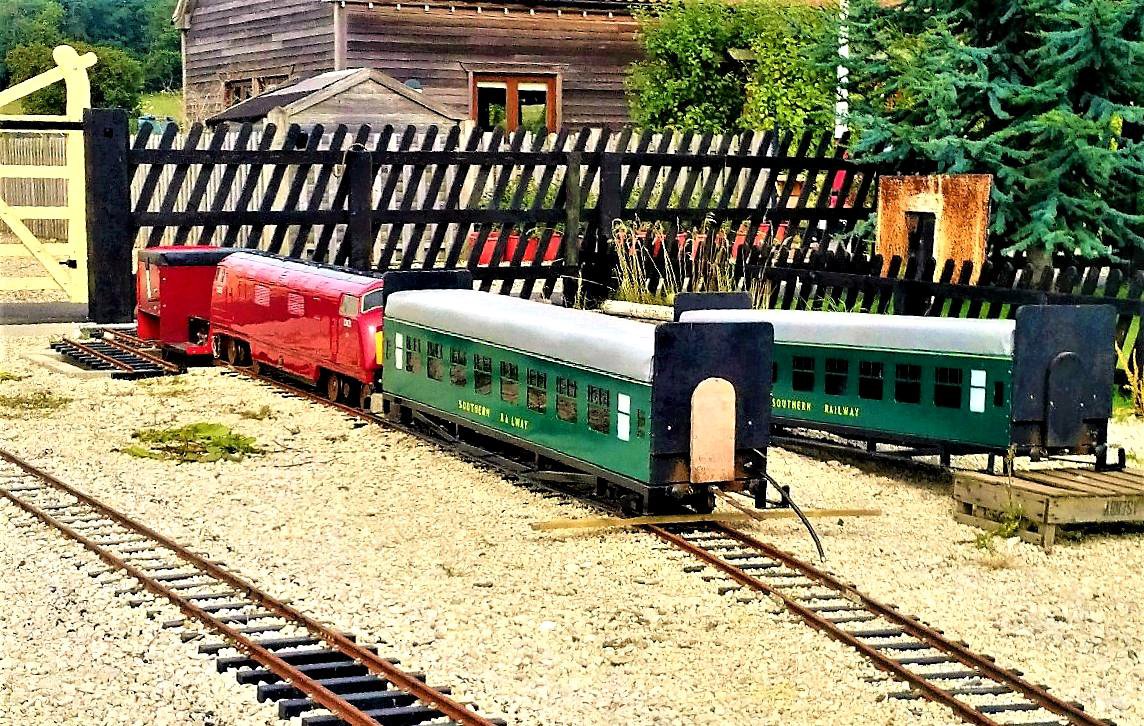 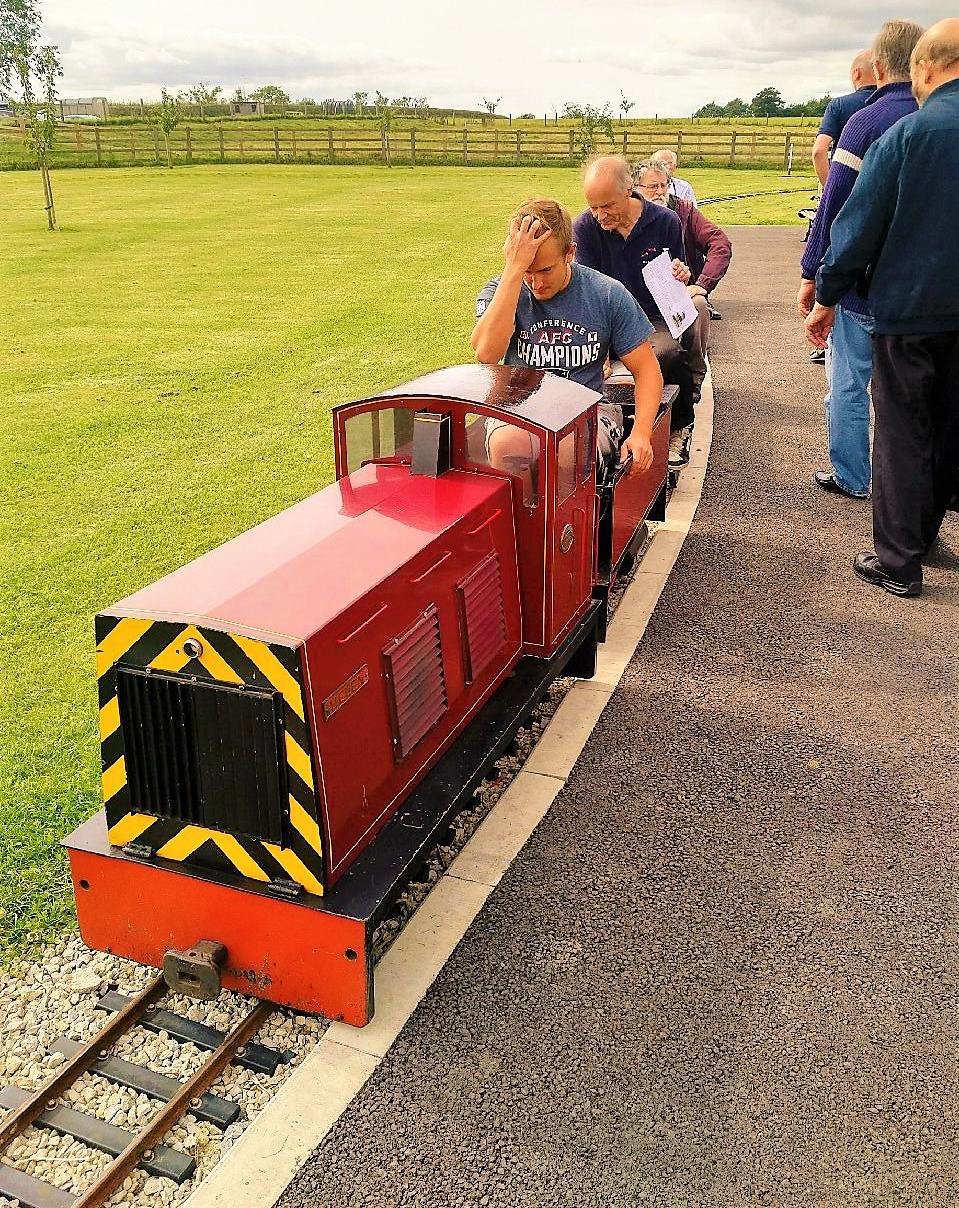 Cedarbarn Railway station, the train will take the circuit around this grassed area and end up
in front of the far fence heading off top right to the main run. What is the driver thinking though???
[© John Cameron 2017]

Grateful thanks are due to Sam and Alex (the driver and pointsman), Steve & Anne (the owners) and, Katrina, of Wolds Way Lavender also Karl, Mandy, Alison and Garvan (the driver) at Cedarbarn. Thanks to Alan Sheppard for organising these excellent fixtures - we hope that he will arrange more!