A visitor to the Great Central Railway (GCR) on his way home enquired why three diesel shunters were being coupled to a rake of coaches in Loughborough Central (HQ of the modern day Great Central Railway) P1. The purpose was explained to him and he departed suitably impressed. For those of us booked on the special the purpose was clear: there were some sections of track required by (unusually) almost all participants and, to add interest, three Class 08s (one a fairly recent arrival) were to haul the coaching stock on the 'main line' element of the special. This joint PLEG/BLS 'Track and Traction' event was excellent value at only £20 (with the offer to purchase a GCR day rover for just £10 more - many bought one and had a full day and evening on the railway). 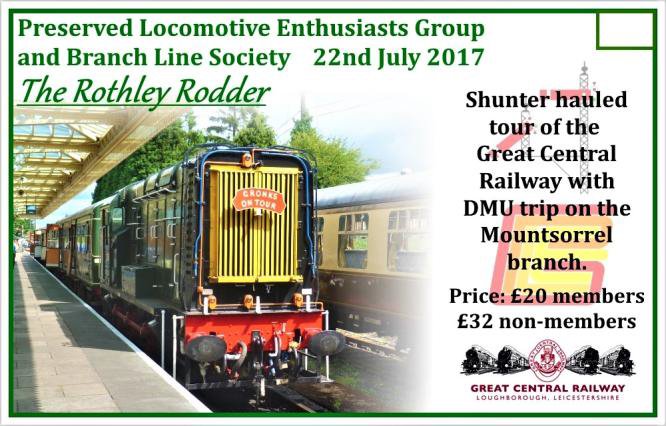 Departure was on time at 18.00 (allowing some to visit Kingmoor DRS Depot open day earlier!). Locos 08907 and D3690 (formerly 08528) made light work of the nonstop journey to Rothley Brook passing through Quorn & Woodhouse, Swithland Up Loop and Rothley P1. Rothley Brook is where the eponymous watercourse flows beneath the railway. Here the train reversed and now hauled by 08694 (added to the stock at Loughborough Central) returned the short distance to Rothley P2 where this leg of the tour terminated. Almost simultaneously the stock for the Mountsorrel branch formed of three car Metropolitan Cammell DMU vehicles 50266, 50321 and 51427 arrived at P1 on the opposite face of the island platform. A rain shower discouraged dilly dallying and participants moved quickly to the DMU for the 'The Mountsorrel Railway' journey, for many the highlight of the event. 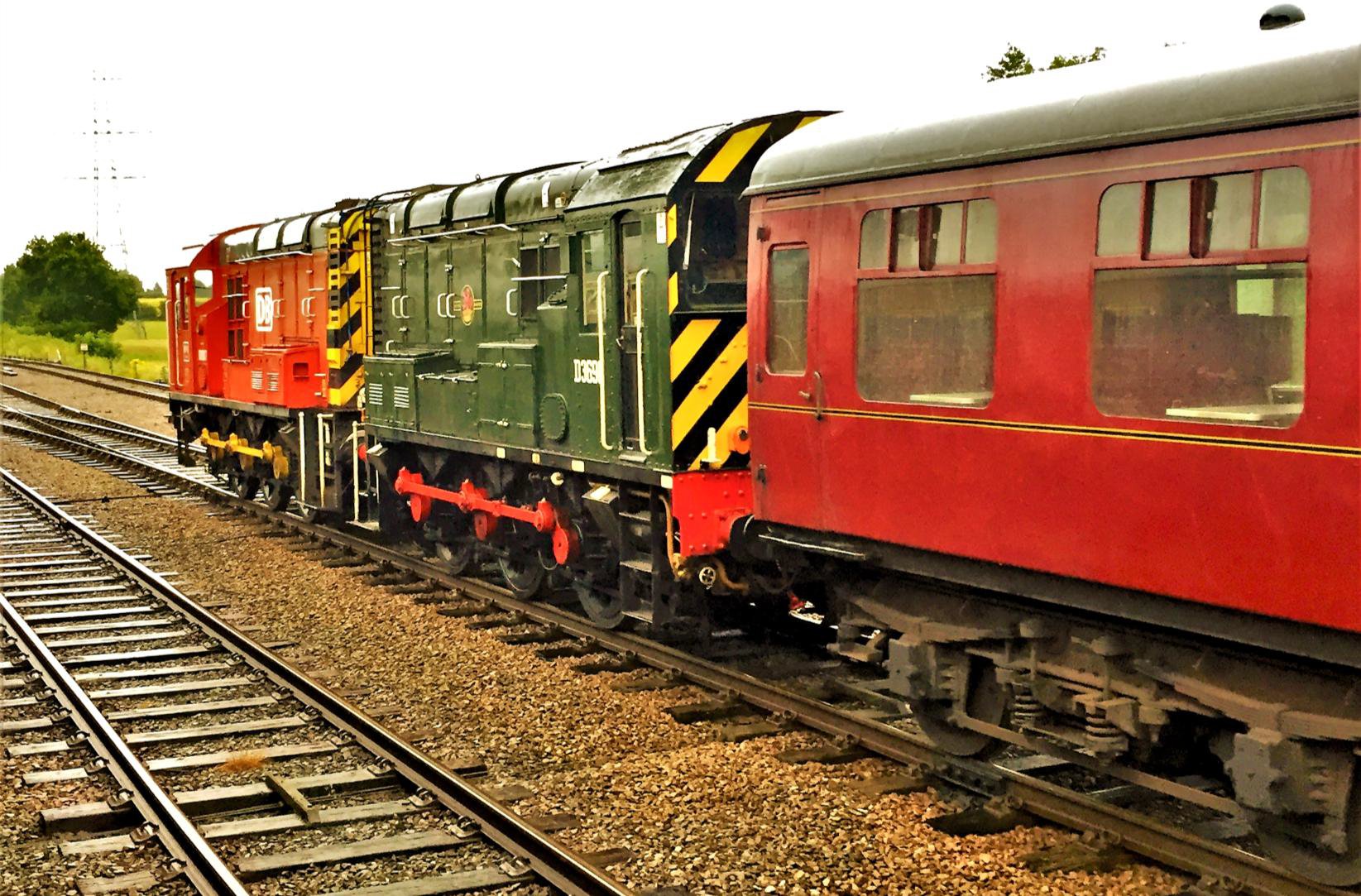 Above and below: Loughborough GCR, both ends of the 'mainline' part of the trip.
[© Kev Adlam 2017] 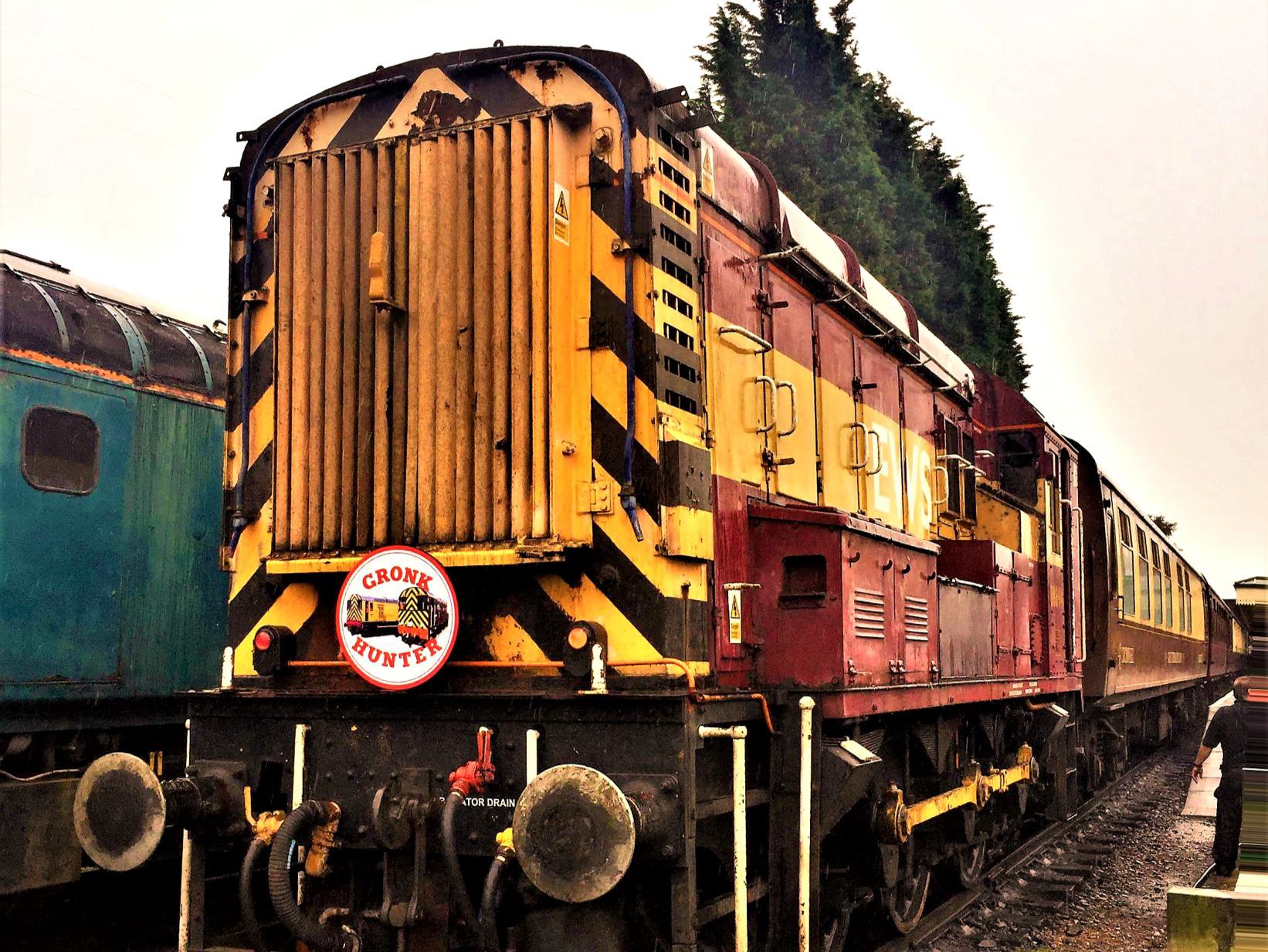 On time the DMU headed north from P1 (along the Up Main in the Down direction) to enter Swithland Up Loop from the south end. It proceeded to the north end and, close to 97m 10ch, stopped to await permission to enter the single track Mountsorrel Railway. The revised signalling which will permit regular through is not yet in place, so special dispensation was needed for trains onto the branch; there had already been two through trips from Rothley during the day.

An indication of the tight curve on the line was the provision of a check rail. After a pause at the Nunckley Hill ground frame (0m 68ch from the junction with the GCR), it was onwards through Nunckley Hill station to Mountsorrel itself, 1m 10ch from the junction. Here in time honoured tradition the train went beyond the platform end - well only part of the leading vehicle in the event - to stop at the sand drag. 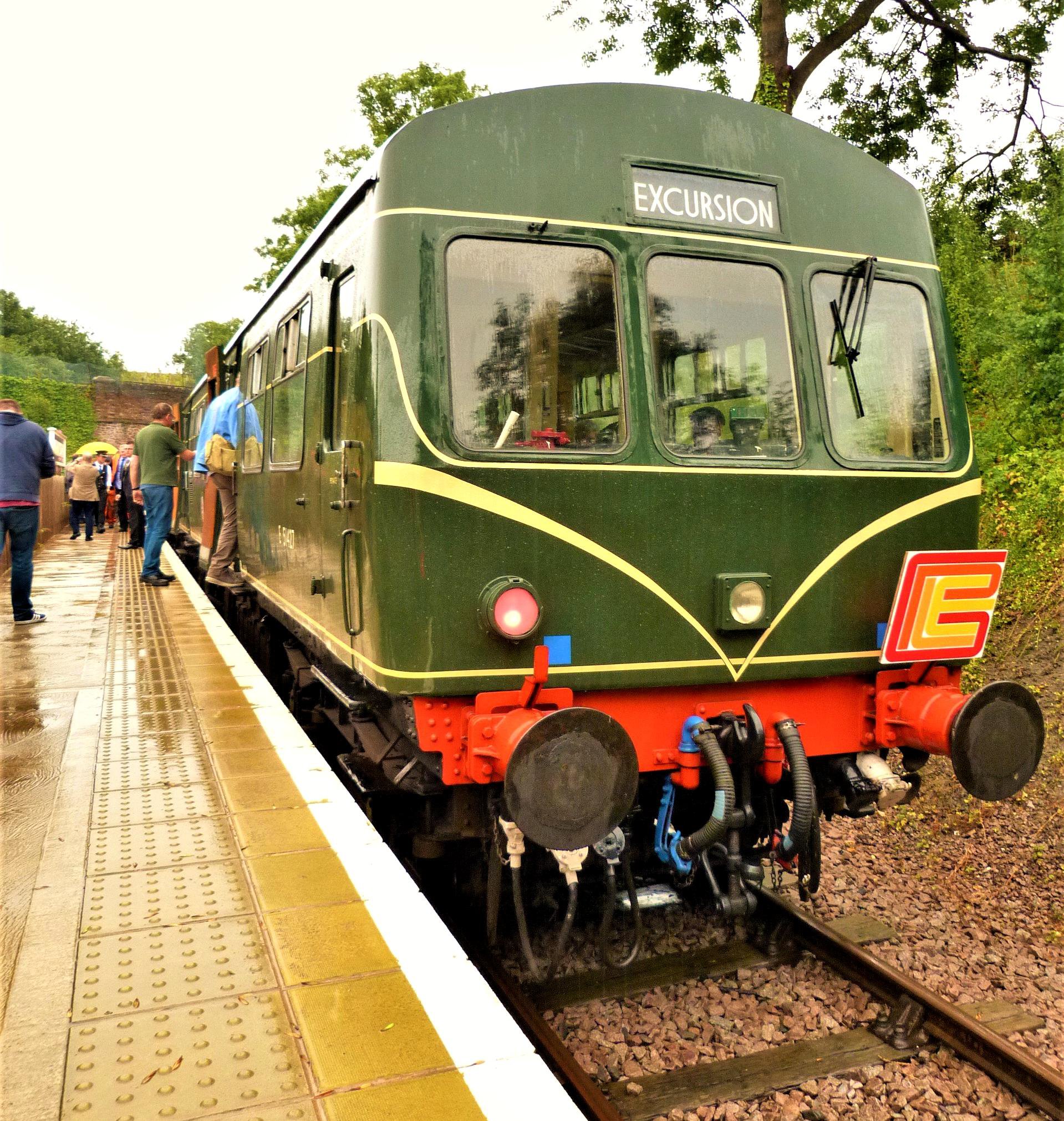 The junction end of Mountsorrel station with the 3-car DMU.
[© Jim Sellens 2017]

Why reopen the Mountsorrel branch? Railway Vehicle Preservations (RVP Ltd) was formed in 1968 to preserve interesting items of railway rolling stock for use on a 'steam railway'. They moved to the GCR in 1981 gaining charitable status in 2002 and operate Rothley Carriage Works for the GCR. Now RVP's charitable aims are to preserve LNER coaching stock from the period 1923-1950 and items of railway postal history. Covered rather than open storage was deemed necessary but there were limited sites for carriage sheds along the GCR. In 2005 RVP took on the lease of the disused Mountsorrel branch but were unable to obtain planning permission to build on it. Permission was eventually given for the shed since built on the Up side of Swithland Sidings. The Mountsorrel Railway rapidly took off, becoming a community project constructed by volunteers with support from local businesses. It OP 23 Nov 2013 (special event) and 24 Oct 2015 (public trains) but not running onto the GCR. Nunckley Hill is its main centre where there are recently laid sidings, rolling stock accommodation, museum and facilities.

Back on the trip, after the brief stop at Mountsorrel for photographs, the train began its return to Loughborough Central via Rothley Brook. A straightforward journey you might think but there was a small but important piece of track to be covered on the branch. For those in what was now the leading DMU vehicle, there was the opportunity to enter the very rare track leading to the sand drag protecting access to the Great Central Railway by the ground frame at 0m 07ch from the boundary. After this manoeuvre the DMU had to reverse 2ch back for the points to be reset to return to the GCR.

As the trip approached the GCR and Mountsorrel boundary, the steam hauled evening dining service, possibly a little tardy in leaving its booked stop at Swithland reservoir, passed by, then stopped at Rothley to pick up a passenger who reportedly had missed it [missing the 'starter' at Loughborough Central but did they get their just desserts?]. Returning to Swithland Up Loop, the coaches and locos for the return to Loughborough were on the Down Main, so more photographs while we waited for permission to proceed. Once the line was clear the DMU was able to go to Rothley Brook and reverse into Rothley P2. The loco hauled set itself now appeared at P1 for another swift cross platform change.

With 08694 in charge it departed from P1 to run briefly down the Up Main in the 'wrong' direction and switch to the Down Main via the rare trailing crossover located adjacent to Swithland Sidings and which, of necessity, had to be omitted from our otherwise comprehensive Jan 2013 fixture. Amazingly the DMU simultaneously departed from P2 along the Down Main into the Down Swithland Loop, a rare instance of unusual 'parallel' running on a heritage railway, although for only a short distance.

08694 took the train back towards Loughborough Central but assistance was needed from 08907 and D3690 as the direct route into P1 was just too simple for a BLS tour. Instead, in search of the unusual for which we are well known (and to uphold our reputation) there was a final flourish. The trip ran via the Loughborough Down Loop alongside P2 to Shed Road 1. Here was the last reversal of the tour via the trailing crossover north of the station and into P1 which the tour had left 2½ hours earlier. 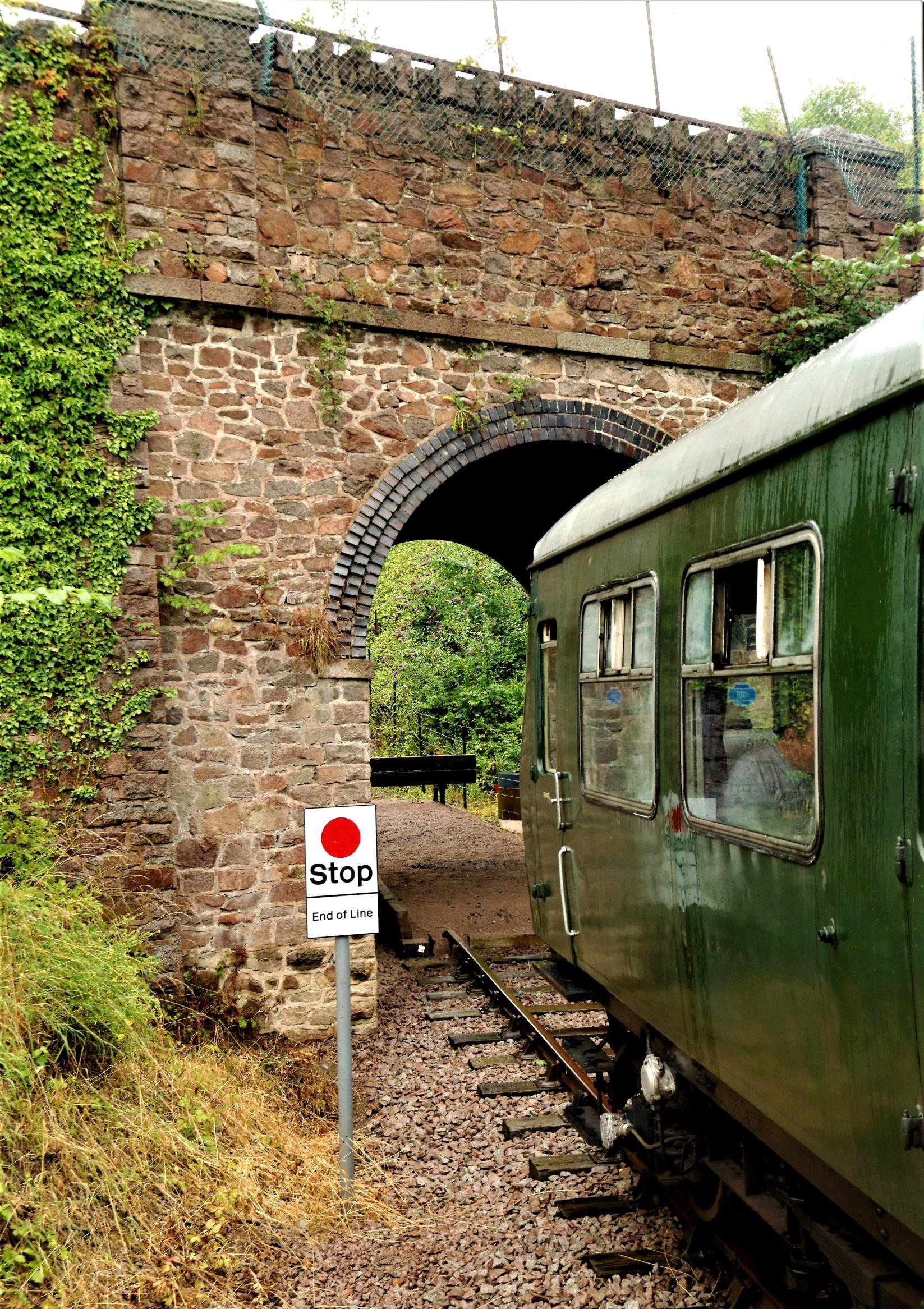 The end of the Mountsorrel branch under Bond Lane bridge. It once continued to the quarry connecting with the former (Midland) branch to the Midland Main line. Large amounts of aggregate are dispatched by rail from the (Down side) terminal south of Barrow upon Soar.
[© Iain Scotchman 2017]

How does this anonymous member assess the tour? Well pretty darned good. Whether your interest is track or haulage there was something on offer in this evening jaunt and if you combine the two then you can't really ask for more. In summary another first class event from the Fixtures Team. Thank you for your hard work which is much appreciated by those members who regularly participate in Society events. Thanks also to the GCR and Mountsorrel Railway for all the arrangements, particularly for the buffet on the main train and even a well stocked bar on the DMU. The 140 participants celebrated the first day of through running on to the branch and the railways benefitted by over £3,600 with sales.