Sunday 25 June 2017 dawned bright and sunny - a perfect day for our track and traction tour with PLEG of the extensive rail freight facilities at AV Dawson's Middlesbrough Goods complex (an unusual facility these days). This describes the 11.00 tour (the second of five identical (they were too!) runs during the day which carried 200 people in total, raising a very creditable £6,800 for good causes nominated by the company). 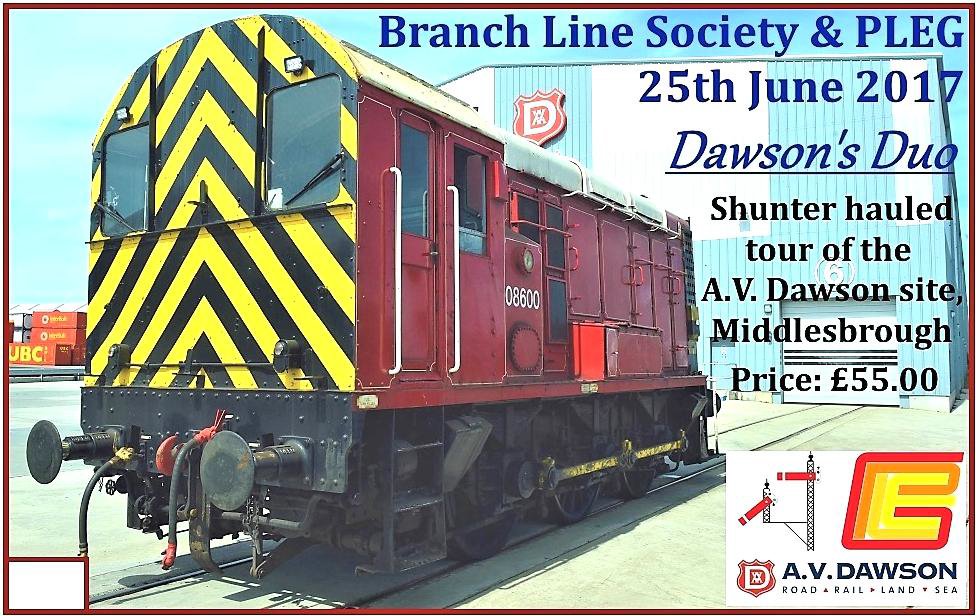 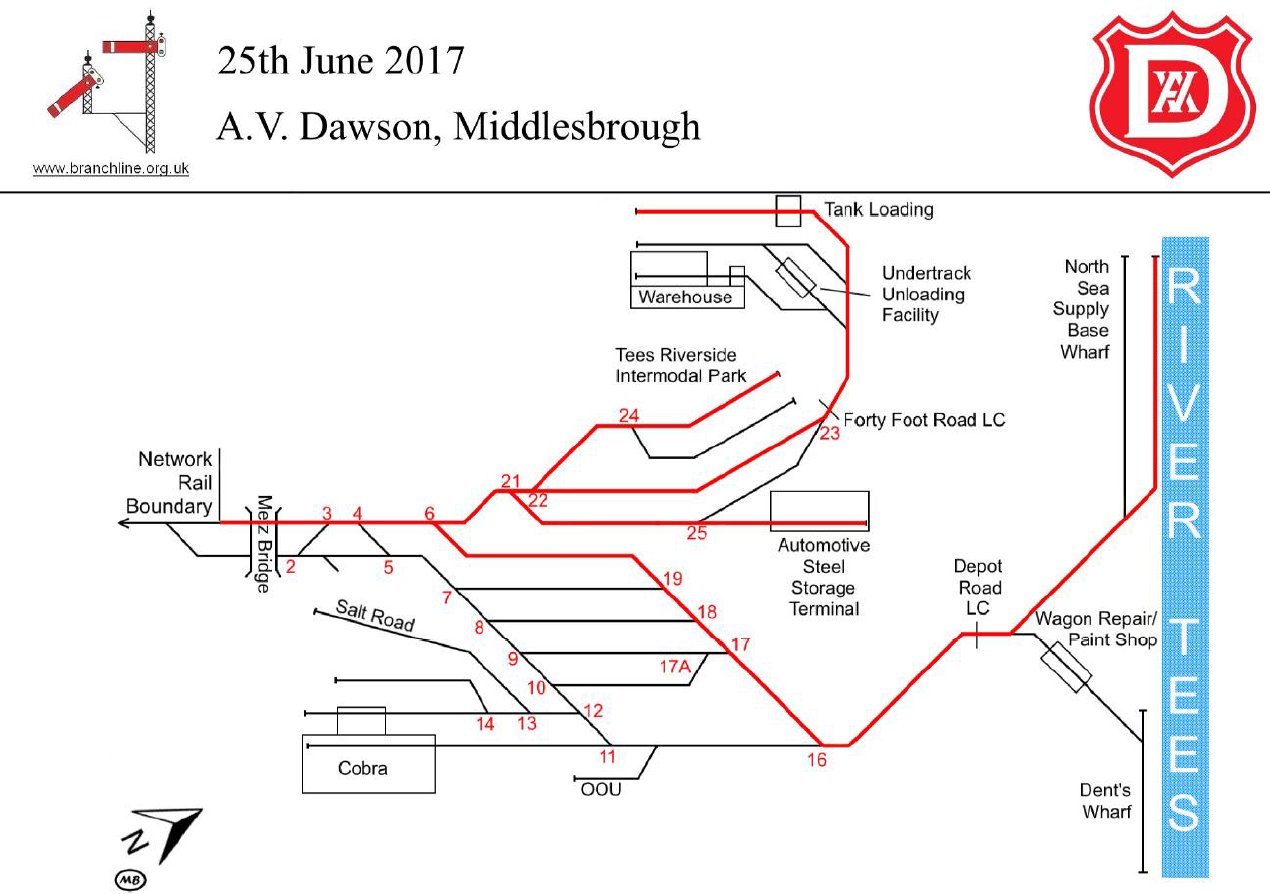 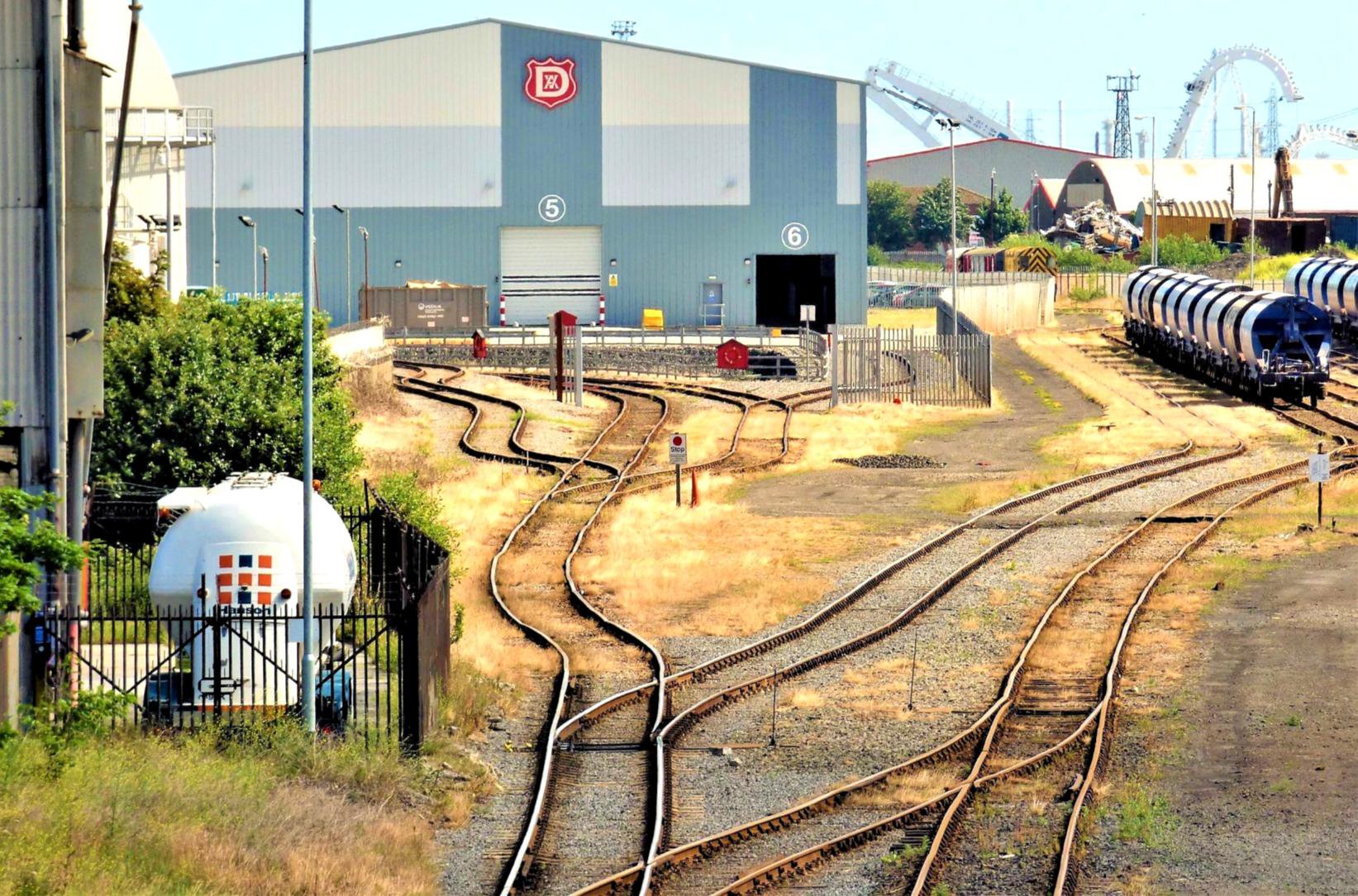 The view north from the Metz overbridge; the Intermodal and Ayrton Terminals are round to the left, door '6' is the rail access to the massive Automotive Steel Storage Terminal and '5' is road access. The wagons (top right) are in the yard and the tour train is behind them in the background on the River Tees Quay branch.
[© Nick Jones 2017]

First on the agenda was a welcome cuppa after, in many cases, long journeys and a fine array of home-made cakes were sold in by 37th Middlesbrough St John's Rainbows and Brownies. Charlie Nettle, Head of Marketing and Business Development at Dawson's, then gave a safety briefing and a short presentation about the company's history and current activities. This family-owned business was formed in 1938 by Arthur Vernon Dawson and is now run by his grandson Gary. The company with about 125 employees offers warehousing as well as logistics services by sea, road and of course rail; annual turnover is £25M. 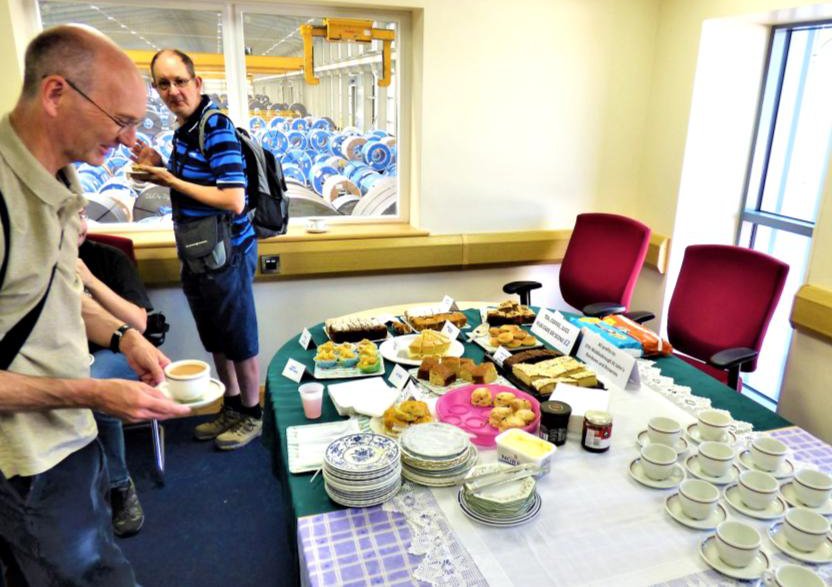 Tea, Coffee and cakes (which went like hot cakes and were frequently replenished)
in the offices above the Automotive Steel Terminal - visible through the rear window.
[© Nick Jones 2017]

We then walked down stairs to the Automotive Steel Storage Terminal to board our railtour formed of ex-ferry wagon 'Molly' (see footnote) recently acquired from the Wensleydale Railway, brought in specially by road and 'topped & tailed' by 08600 in Dawson's distinctive red house livery and 08598 in Potter Group yellow. This massive building was opened in 2015 and provides over 100,000 square feet of storage in a perfectly controlled environment (temperature and humidity) for highly specialised automotive steel. This is achieved with mostly 'green energy' including geothermal heating. 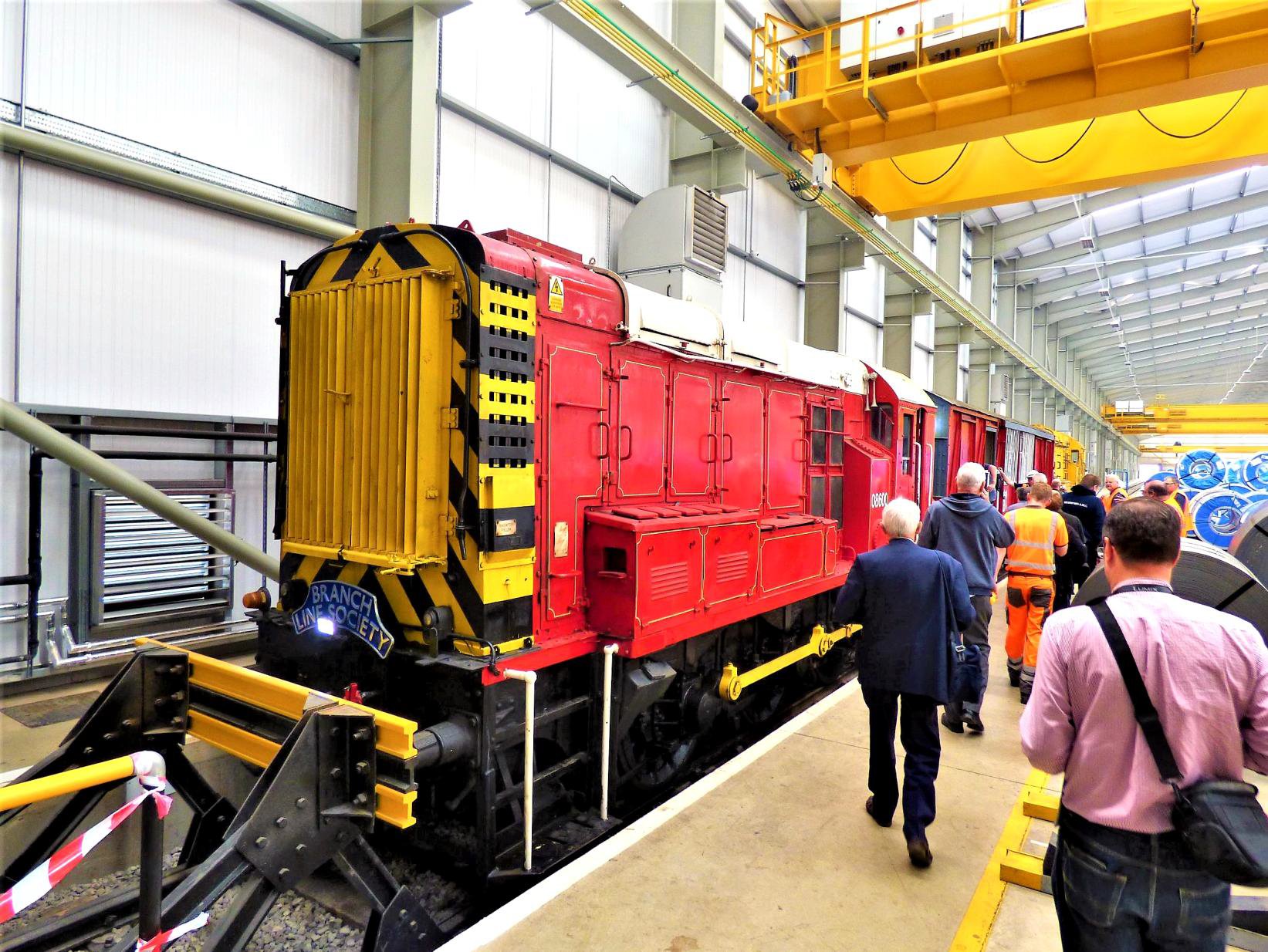 Joining the train in Dawson's Automotive Steel Storage Terminal (at the end of line!).
[© Nick Jones 2017]

The terminal is served by three trains a week from Margam (from Port Talbot Steel Plant). Unlike other Dawson's traffic, this does not normally require use of their 08 shunters. The train loco (generally a DB Cargo 66) runs round in the yard and propels the whole train into the shed. Ours was not the first passenger train to occupy the shed, Pathfinder Tours' Tees & Durham Freighter ran in on 8 Oct 2016. 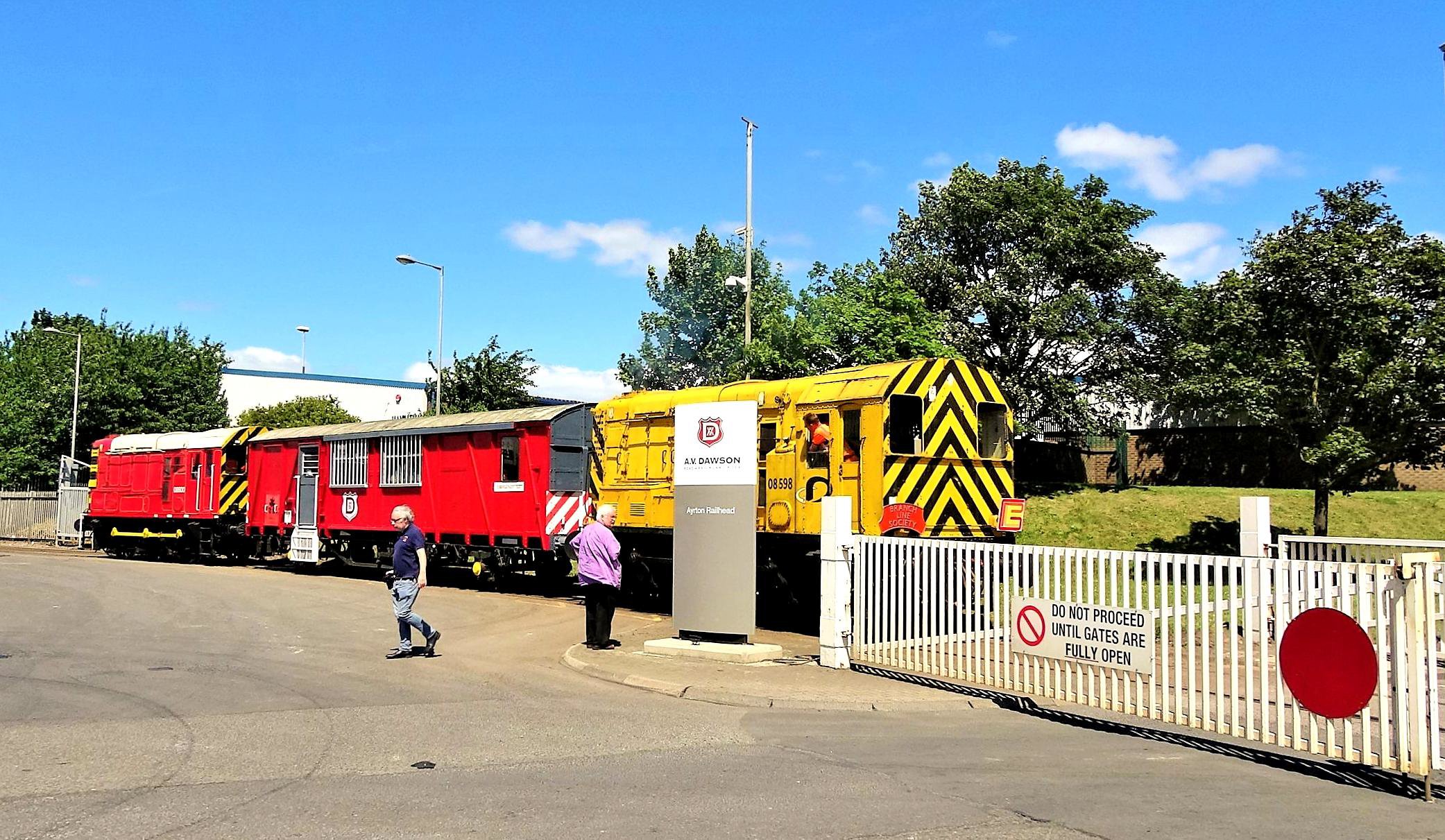 Our tours departed from the buffer stops; reversed at 21 points (see marked track diagram thanks to Martyn Brailsford) and descended over the Forty Foot Road Crossing under the eagle-eye of acting crossing-keeper for the day (Martyn Brailsford!), over the weighbridge and into the Ayrton Terminal. 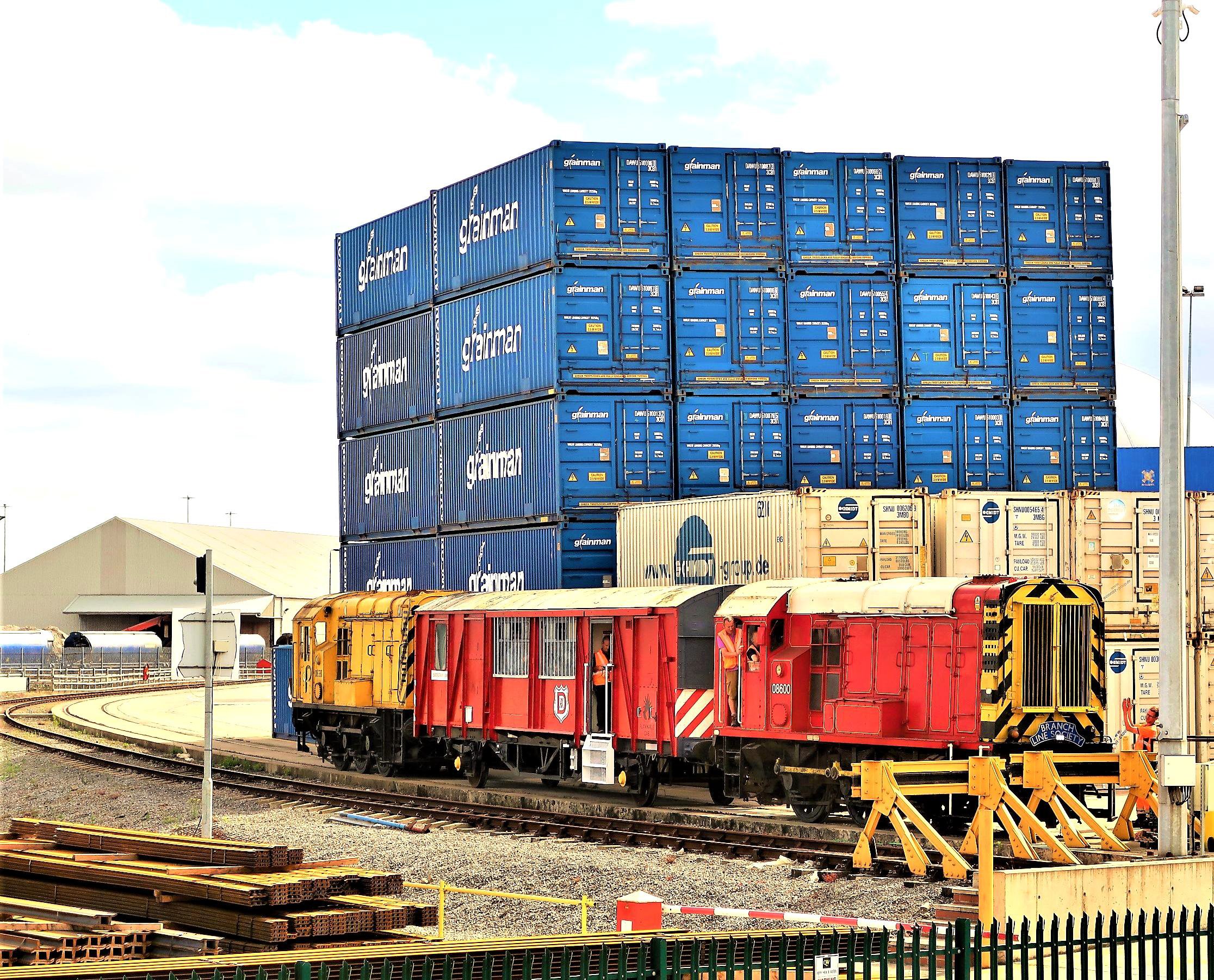 At the buffer stops of the intermodal terminal.
[© Ian Mortimer 2017]

We took the northernmost (Tank Loading) line and resident Dawson's driver David Johnson kindly took us right to the buffers! Although there has been no tank traffic of late, this line was used recently for storing redundant JIA Polybulk wagons. Ayrton Terminal is the area of the Dawson's site that is most intensively used by rail traffic currently, with multiple inbound loads of potash and polyhalite each day (even Saturdays) from Boulby mine for road distribution. These trains are hauled to the goods yard (the grid of sidings) by the main line loco - normally in rakes of about 10 wagons. 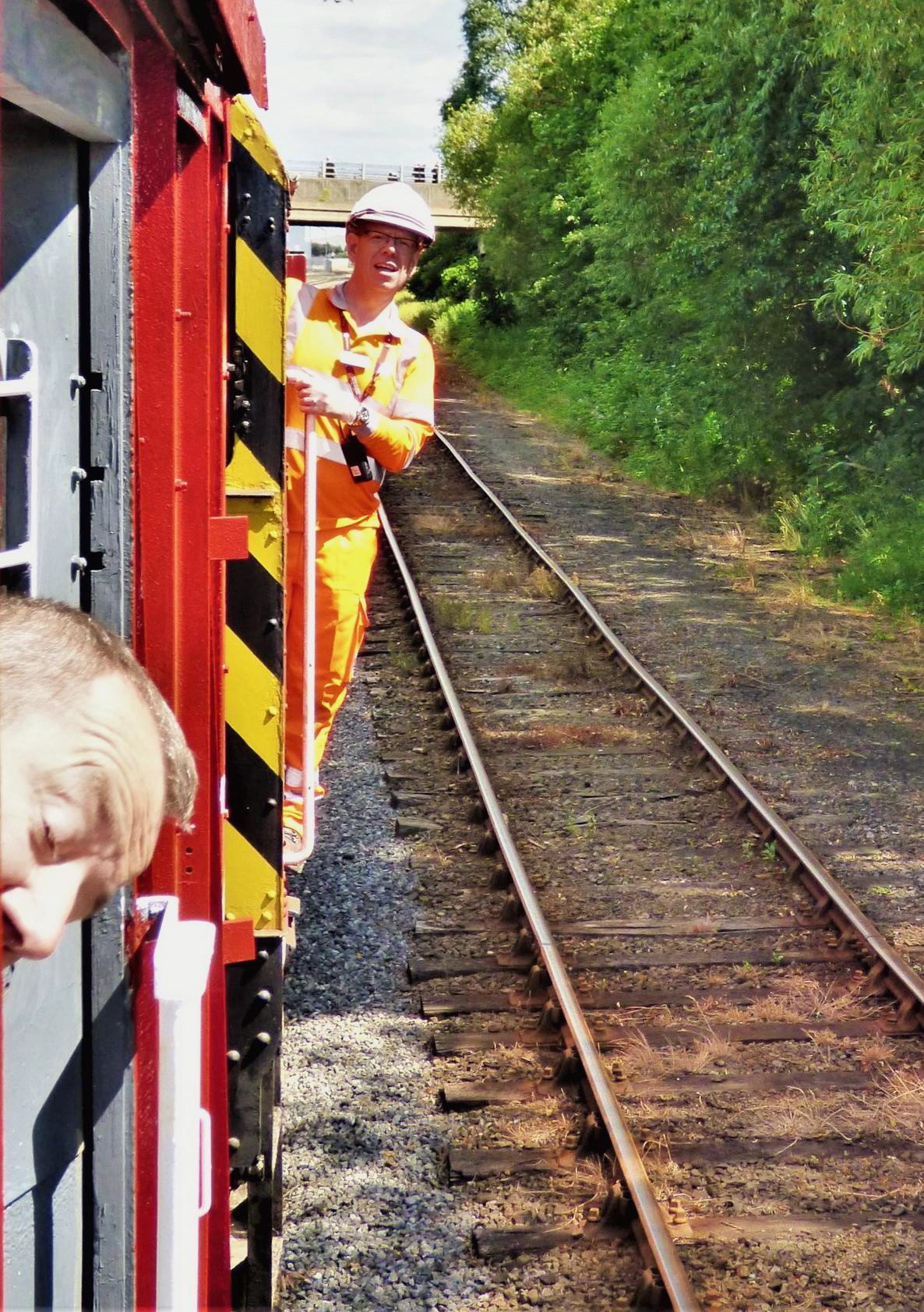 The train stationary at the NR boundary (behind the camera), looking north. Behind train manger Kev's hard hat, in the background is the bridge
carrying 'Metz Bridge Road' (!); Middlesbrough Goods is the other side. Mr Chad is bottom left: 'Wot no run through to Tees Yard?'
[© Nick Jones 2017]

These are taken 3 or 4 at a time down to Ayrton Terminal by one of Dawson's 08's and propelled through the discharge shed (an undertrack unloading facility). No freight traffic was operating on the day of our five charters, being a Sunday. Non-runner 08774 'Arthur Vernon Dawson' was stabled on the discharge road, allowing everyone on the train to have a decent view of it. Back up to 22 points, another reversal took the tour to the Intermodal Terminal. This is primarily for containers but recent uses have included inbound construction materials for the new Woodsmith Potash Mine near Whitby, and storage for scrap JIAs. The Class 08 shunters are also sometimes stabled here between jobs. 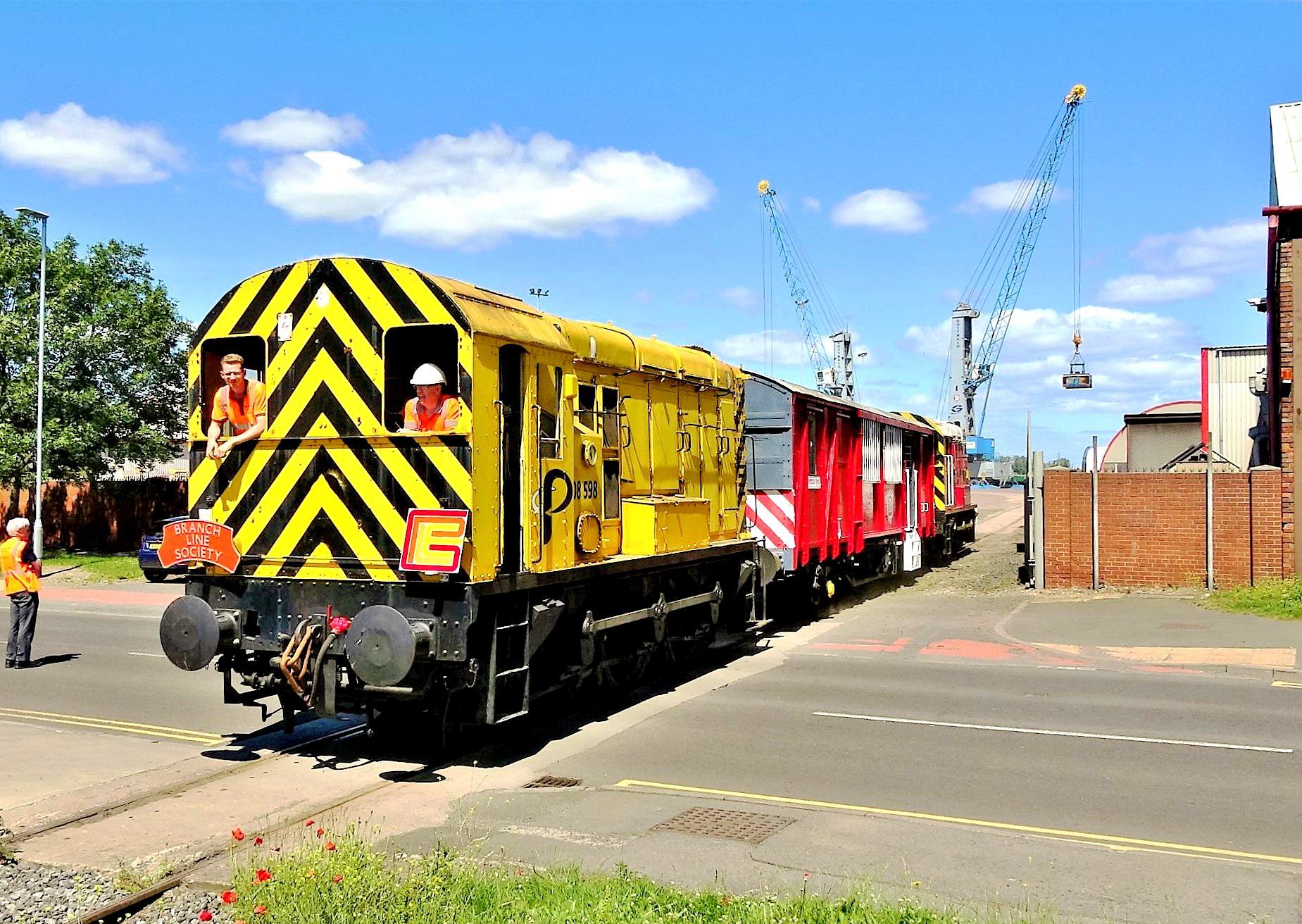 Crossing Depot Road Level Crossing which was very quiet on a Sunday;
stewards (mostly out of picture) stopped the traffic including some very surprised locals out for a jog/cycle.
[© Nick Jones 2017]

Next was a run under the Metz Bridge, right up to the NR boundary (at MP 19 from Darlington) before another reversal and the last branch of the tour, the North Sea Supply Base Wharf. This runs on the quayside serving five ship berths on the River Tees. Again, driver Dave obliged by leading us as far along the branch as possible, only giving up where the track disappeared into the gravel! The last rail freight traffic on this branch had been pipe traffic 18 months previously. Our tours were almost certainly the first ever passenger trains to run north of Depot Road level crossing since the line opened in December 1830. The intervening period of 186½ years may constitute a world record for the length of time between a line opening and seeing its first passenger train and it was considered to be the highlight of this excellent tour by many! The trains were also a great surprise to some of the locals out for a Sunday cycle or walk. The Dent's Wharf branch was not traversed; it was blocked and OOU, as could clearly be seen passing its junction. 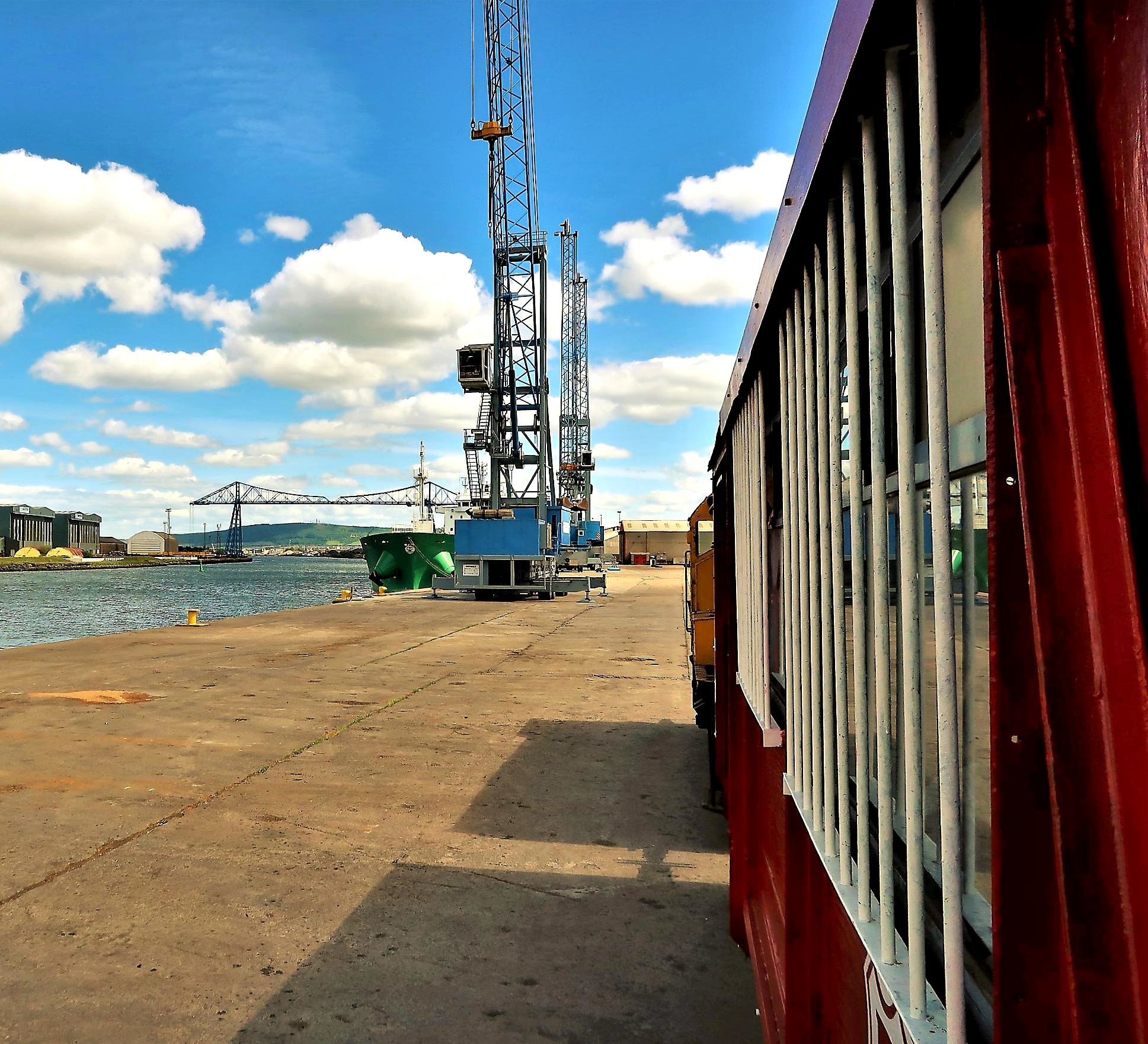 The River Tees and quay looking east with the famous Middlesbrough Transporter Bridge in the background; from the tour at the end of line.
[© Ian Mortimer 2017]

After a final reversal at 6 points, we returned to the Automotive Steel shed again to disembark. However, the fun was not yet over. There were more runs of the train and many of us took the opportunity to photograph them from various public locations. Dawson's also kindly invited us to walk around the Ayrton Terminal so that the unloading facility could be viewed close up, along with 08774 specially moved to where it could be seen from the tour and on foot (the remains of 08912 were also on view).

A massive thank you must go to Kev who, as always, had put many hours of hard work into the meticulous planning (it showed) with numerous site meetings and also his hard-working group of stewards. Special mention of the Dawson's staff who pulled out all the stops to give us a highly interesting and enjoyable tour with a fascinating glimpse into this very successful railway and freight facility. It is quite incredible and a tribute to all involved that an event like this can be staged in 2017. https://goo.gl/P1ckSN is a report with a video and pictures from the local press. e-BLN 1287 has historical notes about the fascinating complex area by Geoff Blyth (who once lived in Middlesbrough) with maps by Dave Cromarty and an unmarked track diagram by Martin Brailsford. 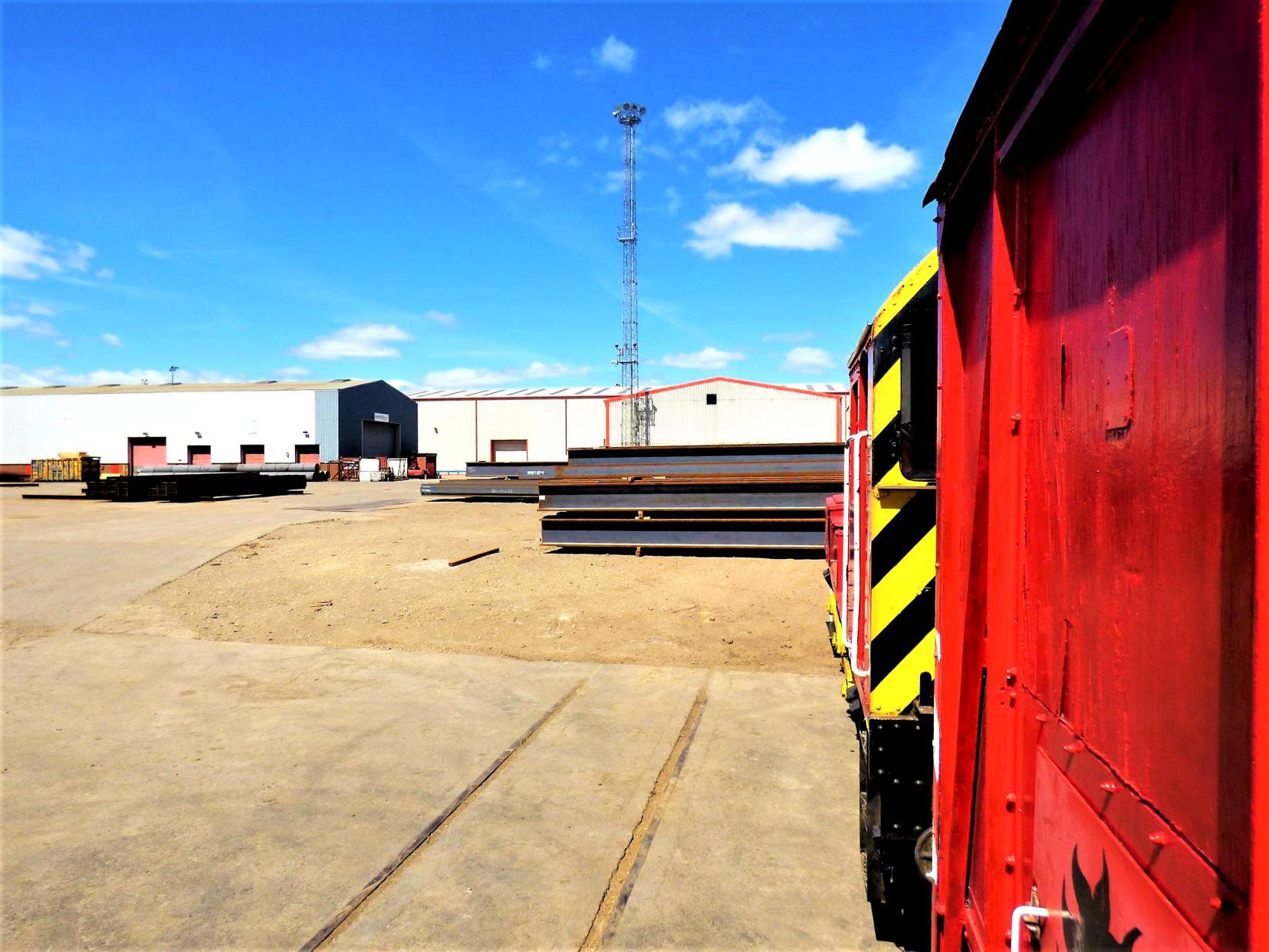 The River Tees Quay; the end of line at the North Sea Supply Base Wharf and into the gravel.
The previous three pictures were all taken at the same location in different directions.
[© Nick Jones 2017] 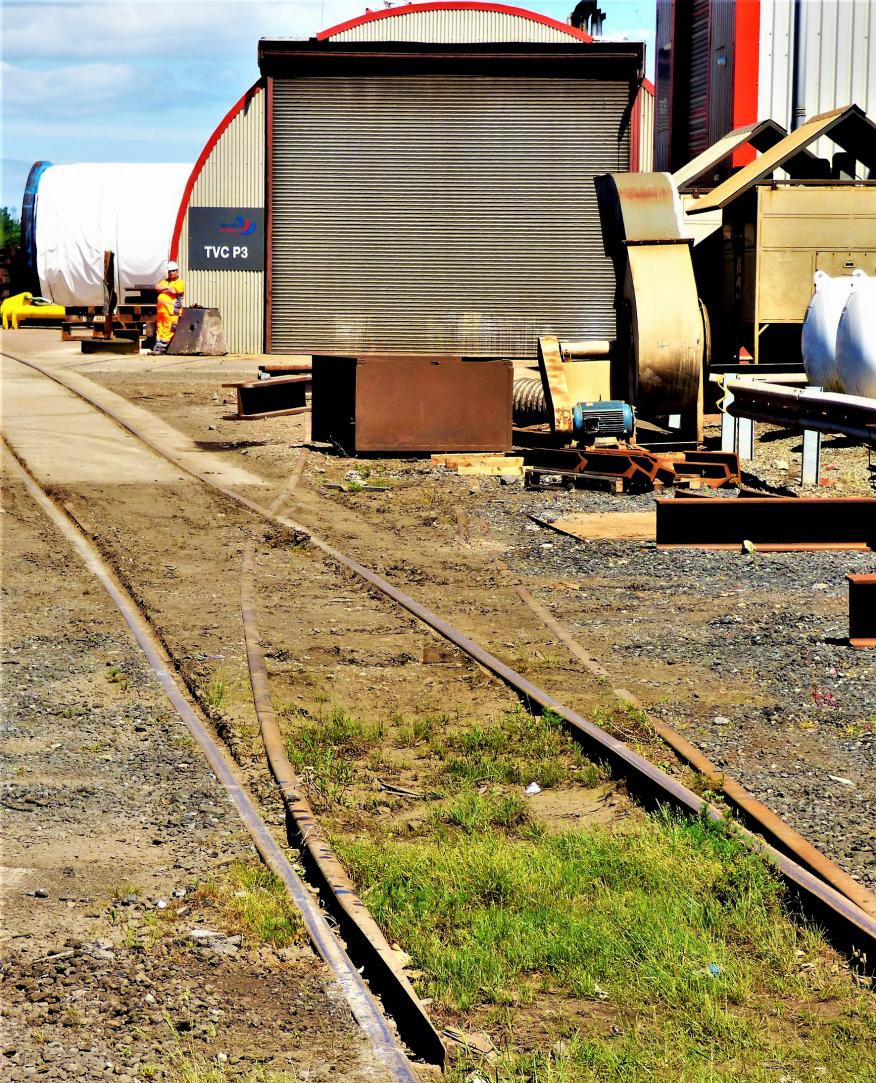 The junction for the OOU Dent's Wharf Branch, which goes off right through the large roller door; looking north towards the River Tees.
There were some large chunks of metal on this line as well as the buildings. The line off left is to the River Quay
(North Sea Supply base Wharf) and was included in the tours. Depot Road Level crossing is behind the photographer.
[© Nick Jones 2017] 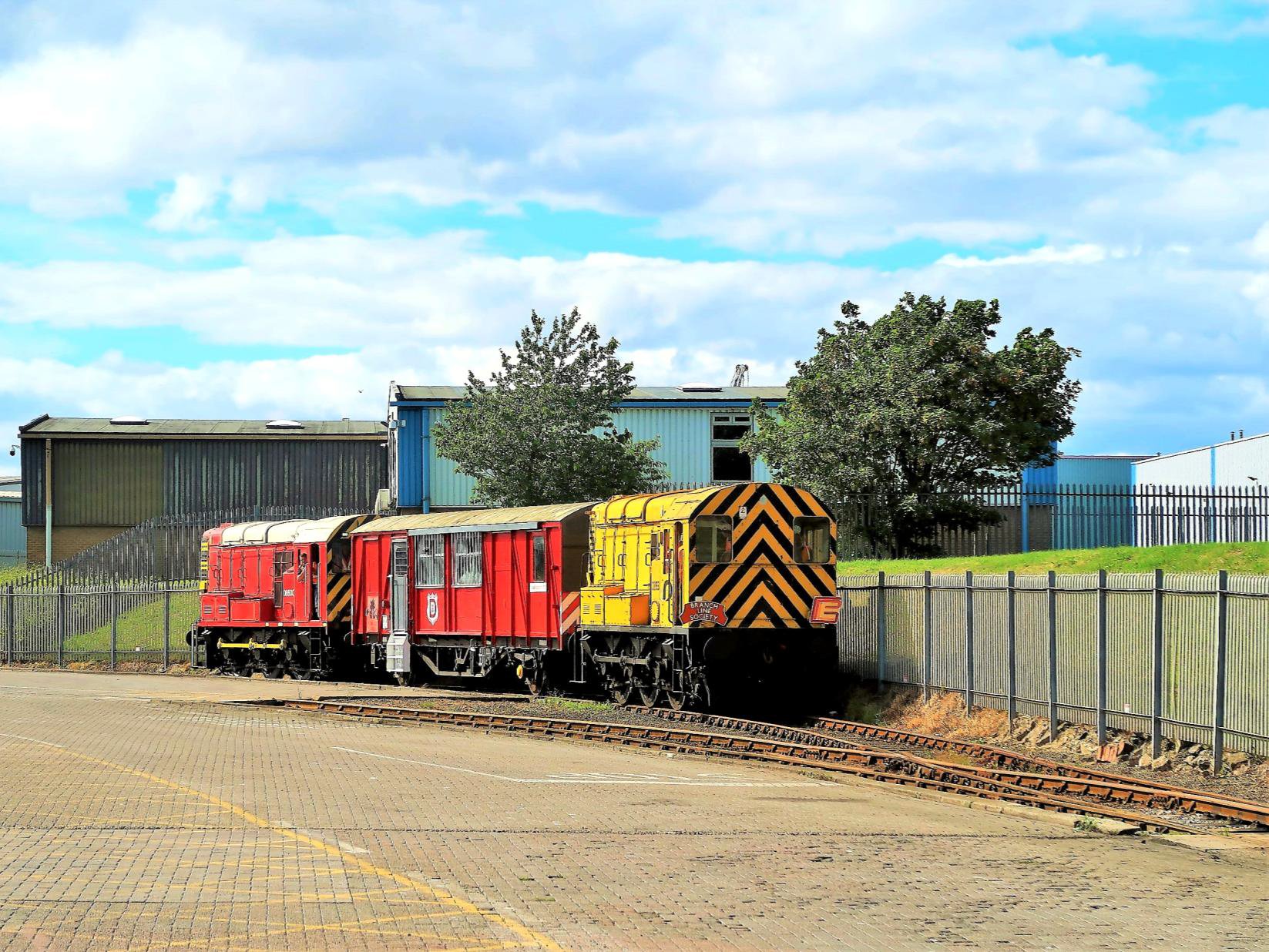 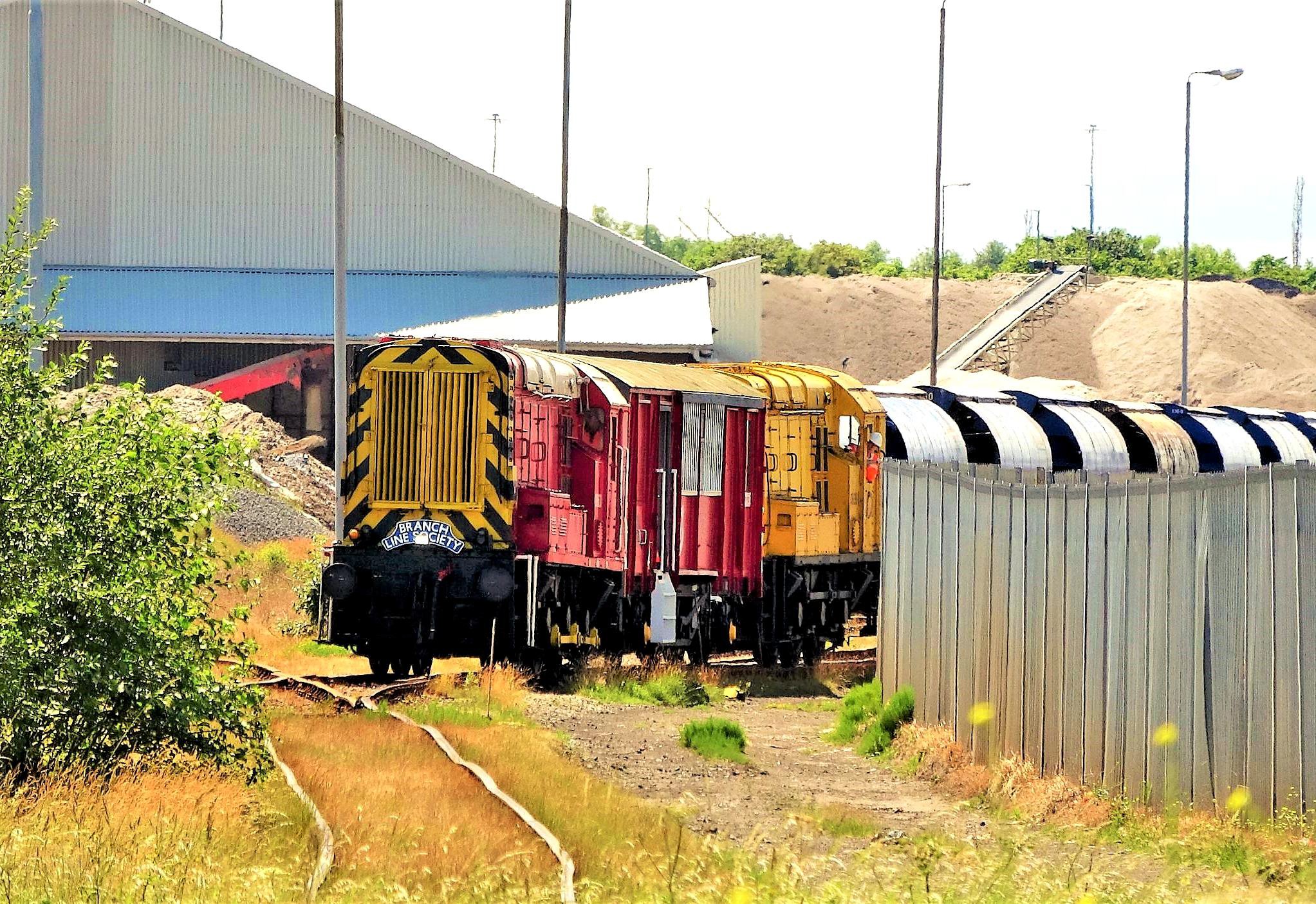 An optical illusion as a tour passes through the Goods Yard; - despite appearances it is not hauling the JGA wagons!
[© Nick Jones 2017] 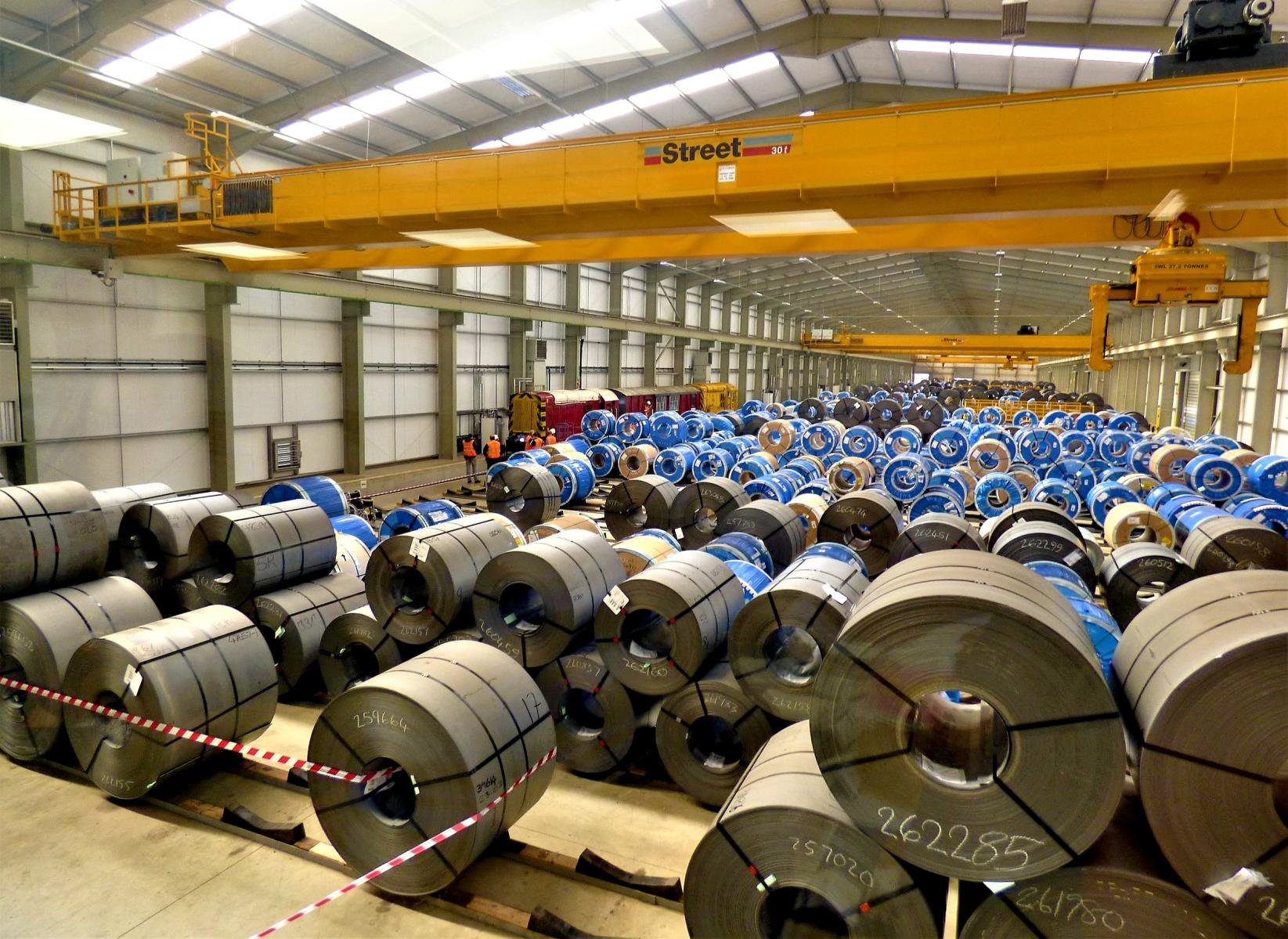 A tour arrives back in the massive Automotive Steel Storage Terminal.
[© Nick Jones 2017] 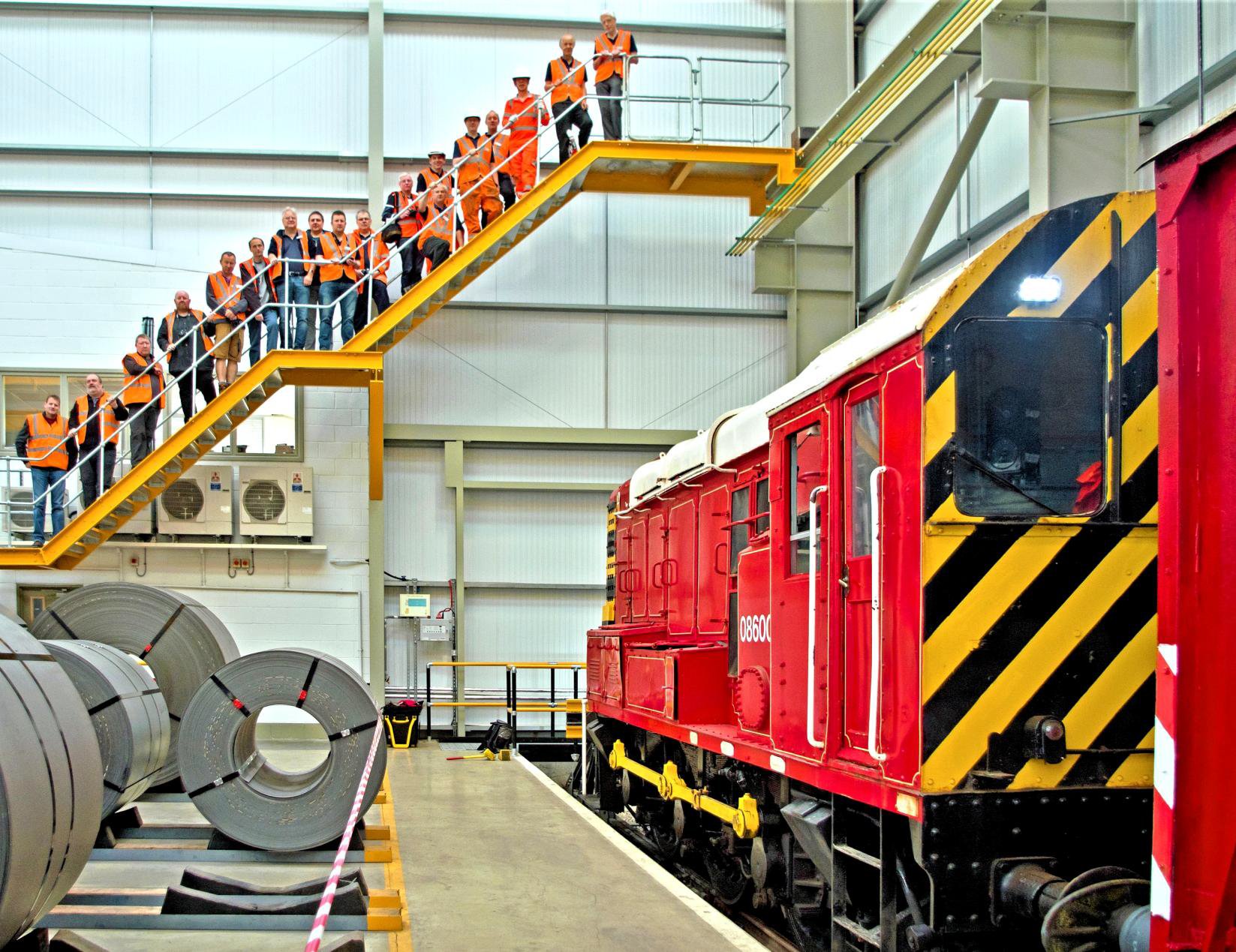 The 'line up' of stewards (or should that be an identity parade?) from the Society and PLEG. All had arrived for 08.30 and stayed all day on rotating duties.
[© Geoff Plumb 2017] 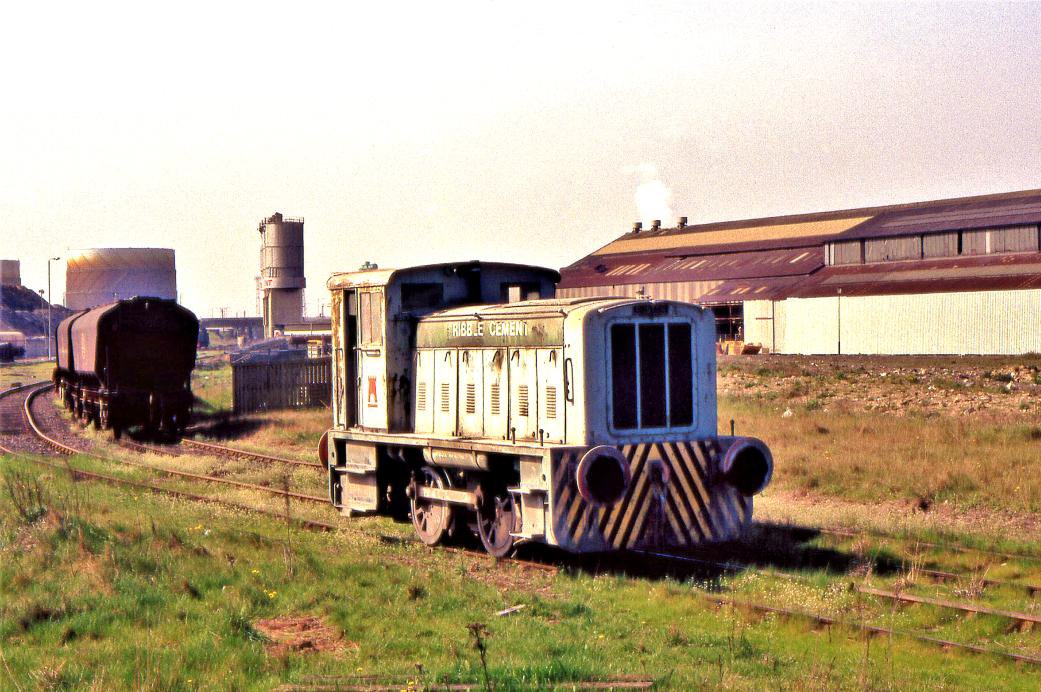 The Society has become a Rolling Stock Owner, acquiring a 4-wheel 20 ton non-ventilated ex-Ferry Van B786968 'Molly' originally with sliding doors. Her debut was on our 25 Jun AV Dawson tours. The van was built for BR in 1961 by the Pressed Steel Company, 46ft long over buffers. In BR ownership she was converted at Lowestoft into a mess van with a door, emergency exit, and two windows each side. The van had been on the Wensleydale Railway (WR1117) OOU for some time and will hopefully come in handy on many future occasions. Although unlikely ever to run on the main line, it is perfectly sound and can cope with curves of radius as small as 2½ch, making it ideal for the type of remote lines our members love to explore! 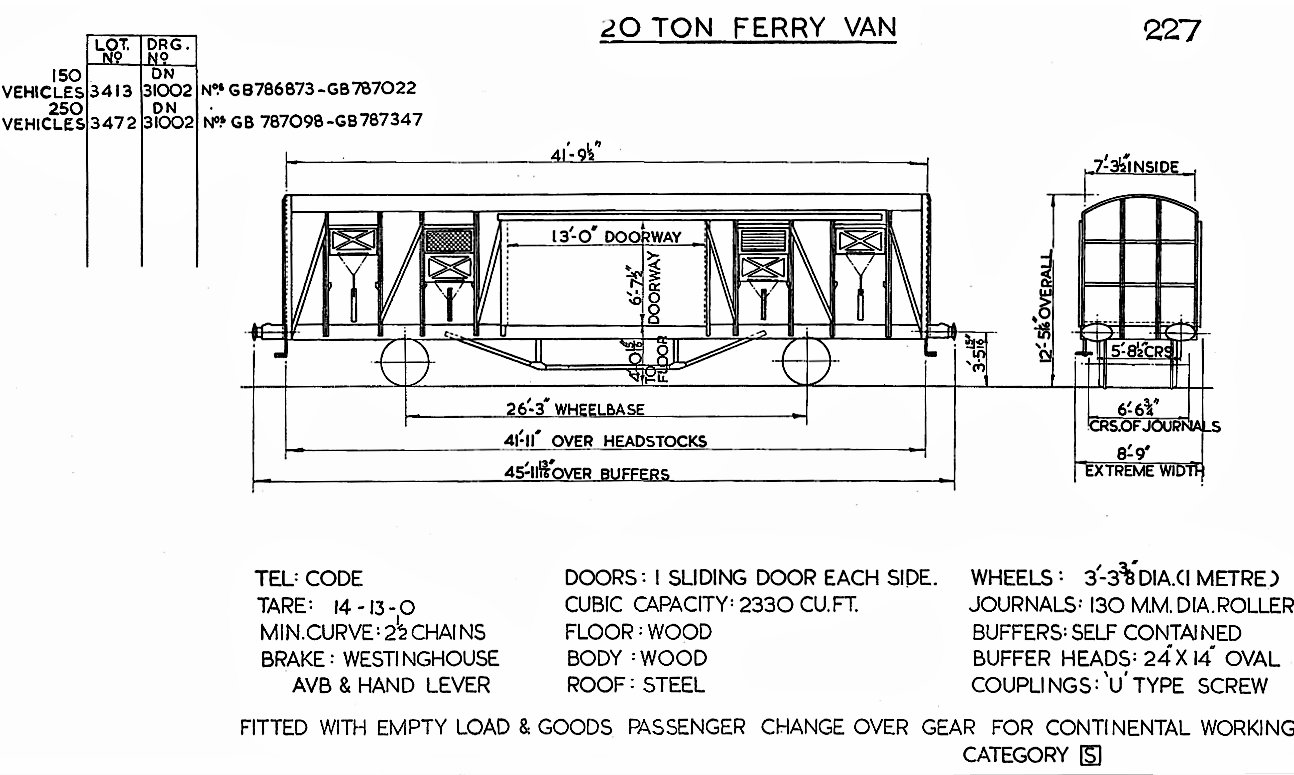 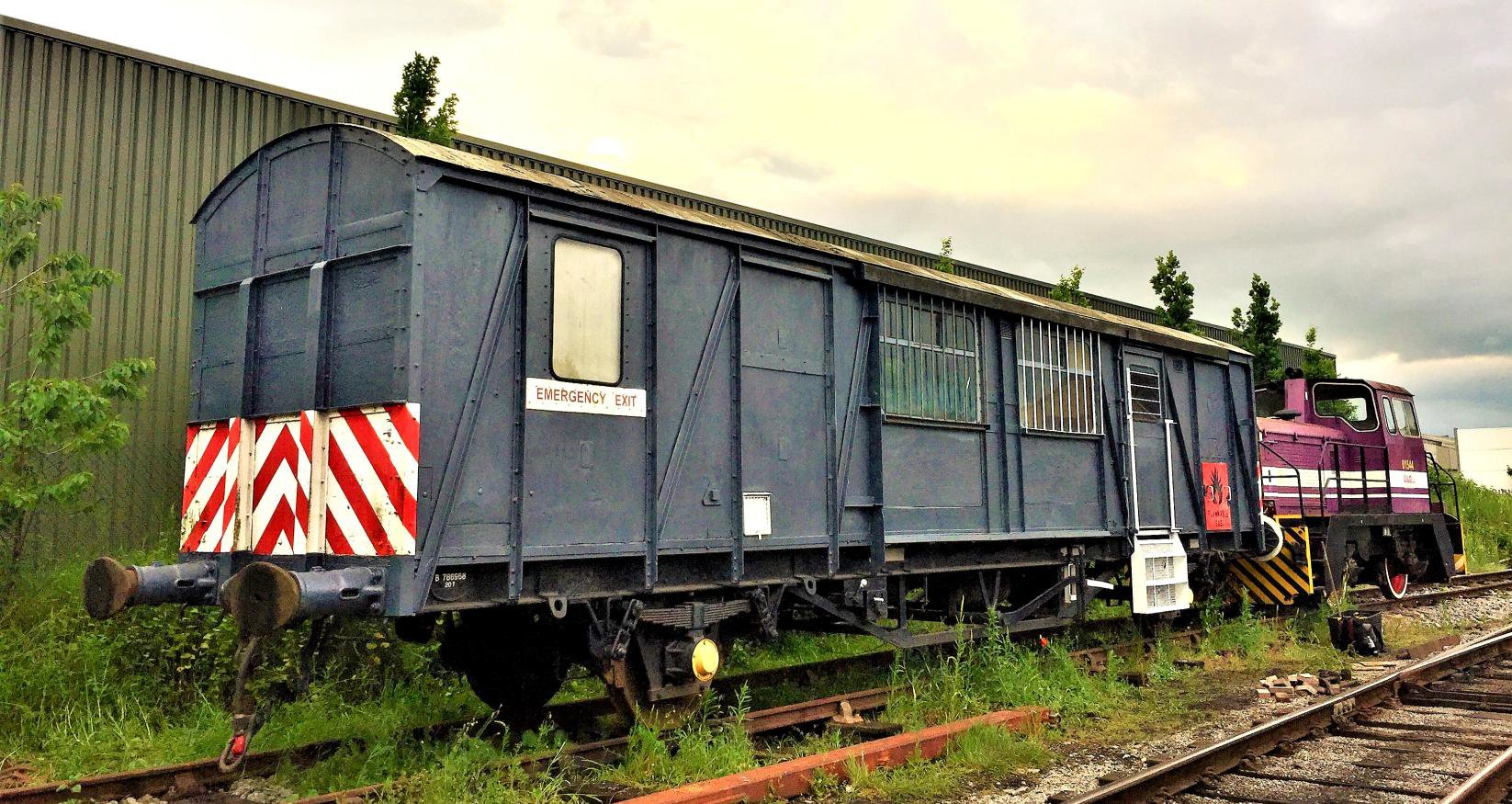 'Molly' in undercoat while still at the Wensleydale Railway.
[© Kev Adlam]

A small team of BLS volunteers (thank you) led by Kev Adlam carried out restoration work on the van for our 25 Jun event, including rubbing down and filling the exterior and painting in the splendid Dawson's red. The interior was thoroughly cleaned and couplings were attended to. Internally, there are 14 seats with room for rather more standing. At one end is space for a guard/stewards and a cupboard to store equipment such as point clips, fire extinguisher and a first aid kit. The van is based at Barrow Hill and it is hoped that she can be used in 2018 for a re-run of the tours at AV Dawson's (the original date was heavily oversubscribed) as well as some other interesting fixtures… 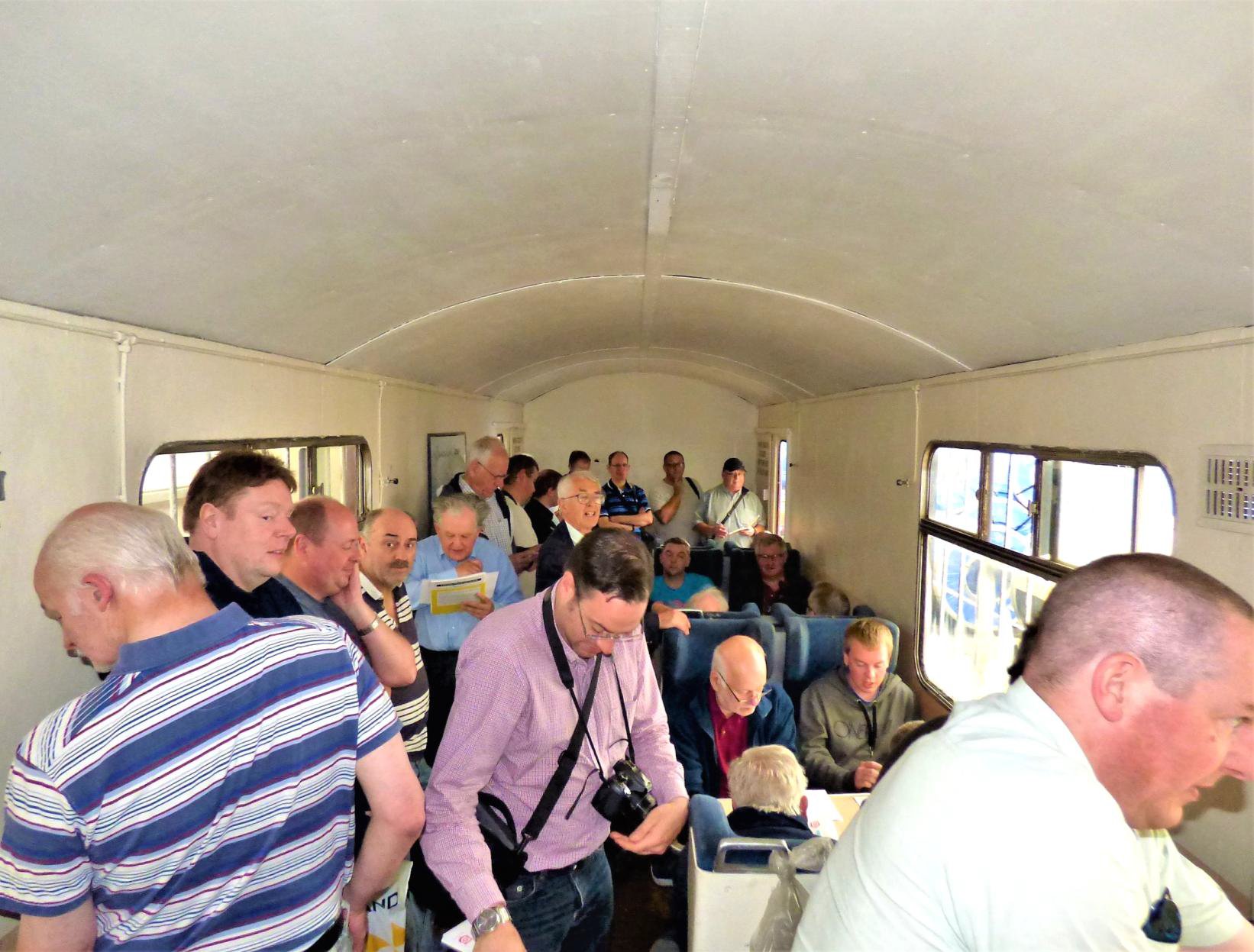 On 13 Aug in 22 'volunteer hours' the kitchen sink, cupboard, steel toilet cubicle, the rest of the bed frame, shower, damaged heaters, some of the gas pipework, taps from cold water tank and wipeboard were all removed. The Yale locks were removed ready for new keys to be cut, holes in floor were replaced with steel plate and the sole bar was painted black gloss on all four sides including the buffer beams (and looks much better for it!). Additionally a temporary repair was made to the inner door handle and the roof was inspected for integrity. The next big task is to paint inside and there will be some filling and prep work to do, and remove the old lino flooring before sourcing a new floor. The Society is grateful to the Wensleydale Railway, Barrow Hill Roundhouse and Reid Freight Services, specialising in rail vehicle movements by road, who moved the van. 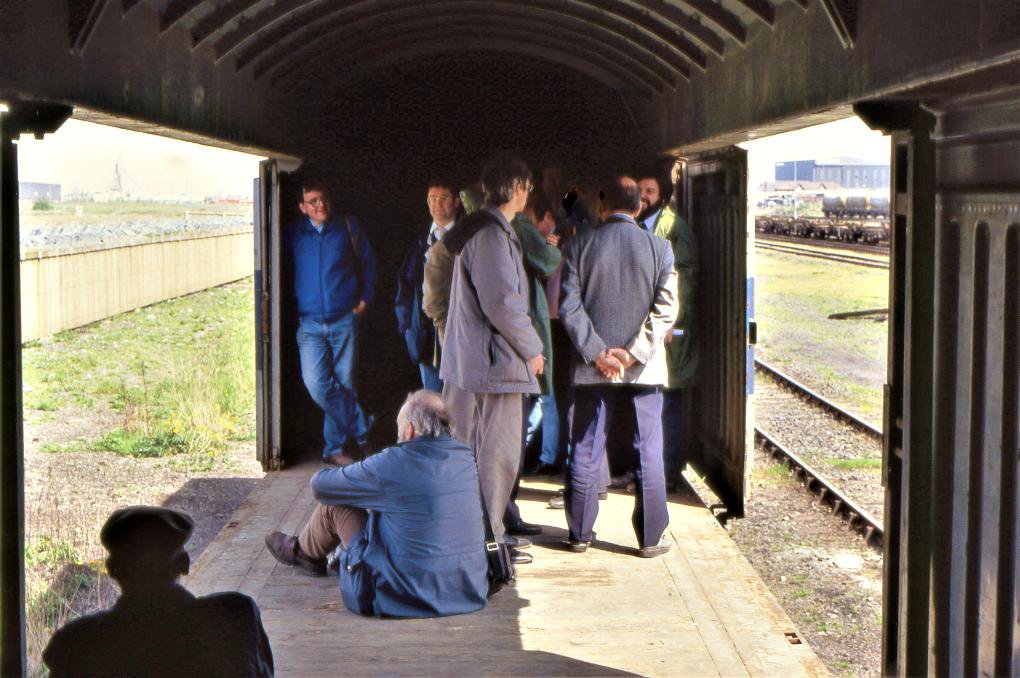