As a prelude to our 'Cat & Dock' railtour the next day, 20 Members (including a 'Doc' but no Cat) eagerly assembled at Rudyard station (also site of the standard gauge one) and enjoyed tea and coffee while our trains were prepared. One was with Steam No.8 'King Arthur' 0-6-2T of 2005, and the other 4w4 DH 'Glen Auldyn'. The first set off to Hunthouse Wood terminus where the loco ran round and in true BLS tradition propelled the train to the bufferstop on the remarkably long headshunt. 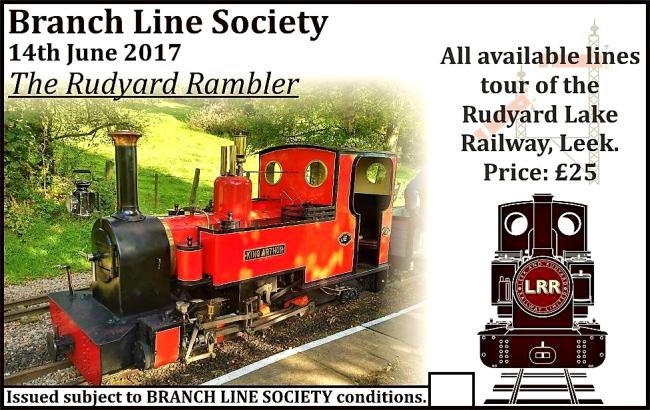 This cleared the loop's north spring point (even in summer) so return was through the loop (what else would you expect on a BLS trip?). A second trip to the buffers was followed by Lakeside loop (now with sprung points and left hand running) where we crossed the diesel-hauled train. The 1¼ mile run on this 10¼" gauge railway alongside the lake is in superb scenery and it was a lovely sunny day too. Back at Rudyard station a most interesting talk was well received about the history of the Lake Railway and the Isle of Mull Railway (most of its assets are now here). On 18 Dec 2015 the new owner bought the railway, under the name 'Leek & Rudyard Railway' (hint) and is investing heavily. The track from Mull is earmarked for the south extension to Leek and an extension north is being considered. 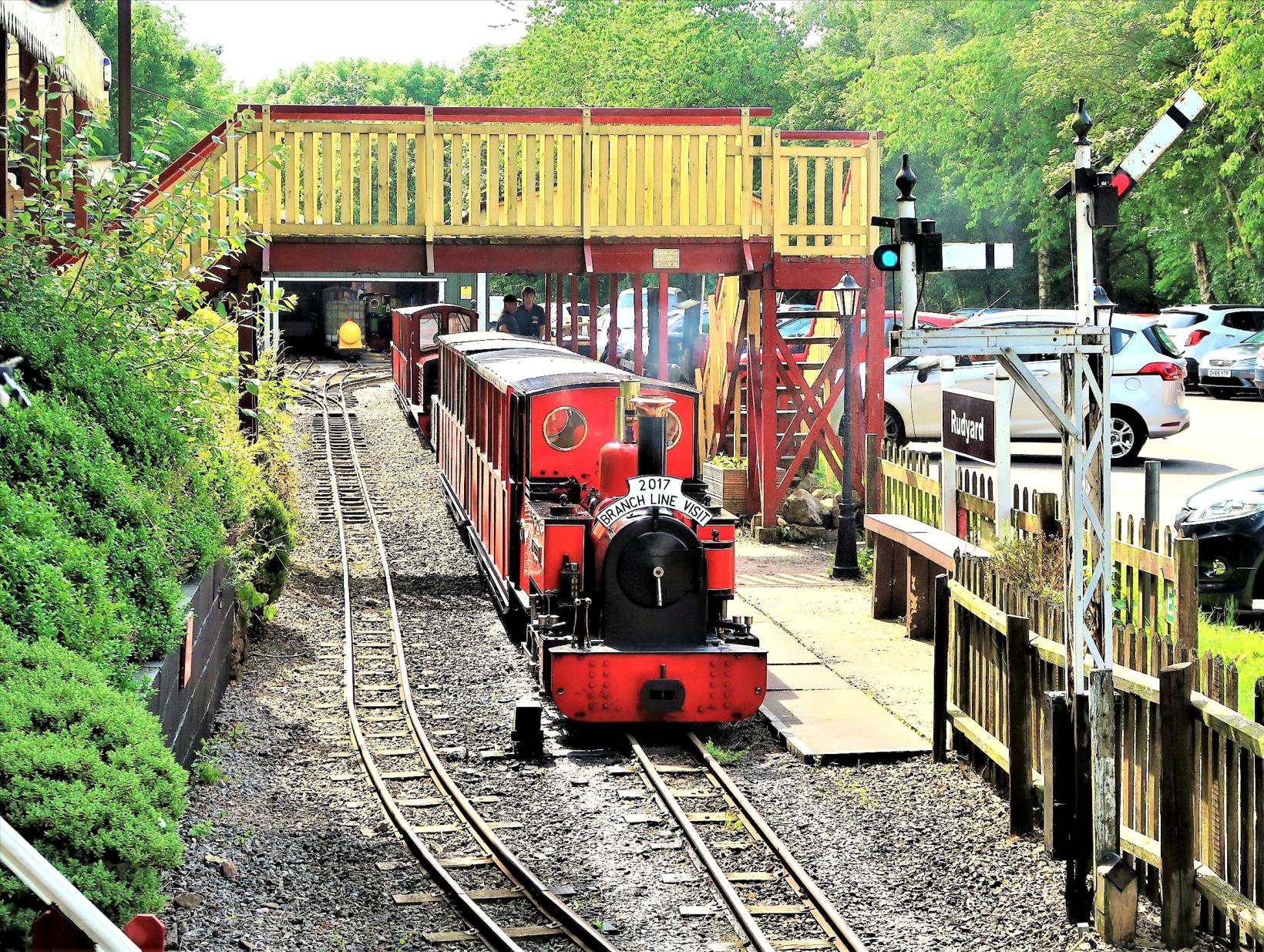 BLS special at Rudyard (note headboard) Wed 14 Jun - not a public running day (although quite a few did express interest and wondered
what was going on as we went in and out of the shed). Looking south towards Leek; the new shed is in the back ground. 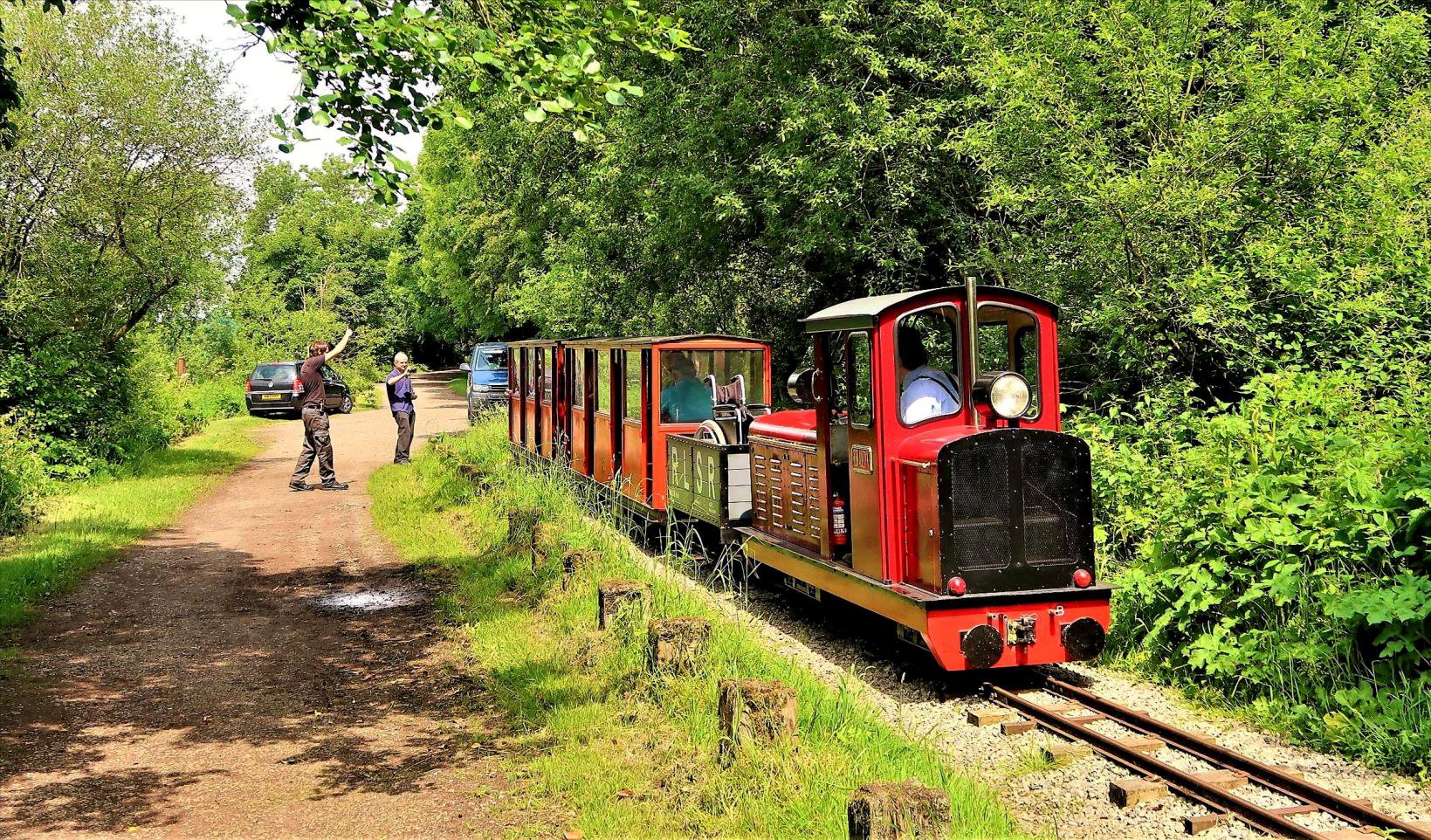 At Hunthouse Wood station headshunt end of line, looking north towards Rushton.
Vehicular access is along the former trackbed, one day the railway hopes to extend this way.

After the diesel party arrived back they made a steam-hauled trip to Lakeside and we had an excellent buffet lunch in two sittings. To do the start of the line south towards Leek, which newly curves sharply around the west side of the brand new shed, a wagon had been especially adapted with four wooden benches fixed to the sides onto which two people could (only just after that superb lunch) squeeze. With eight per train, three trips were made propelled by No8 for everyone to reach the end of line. 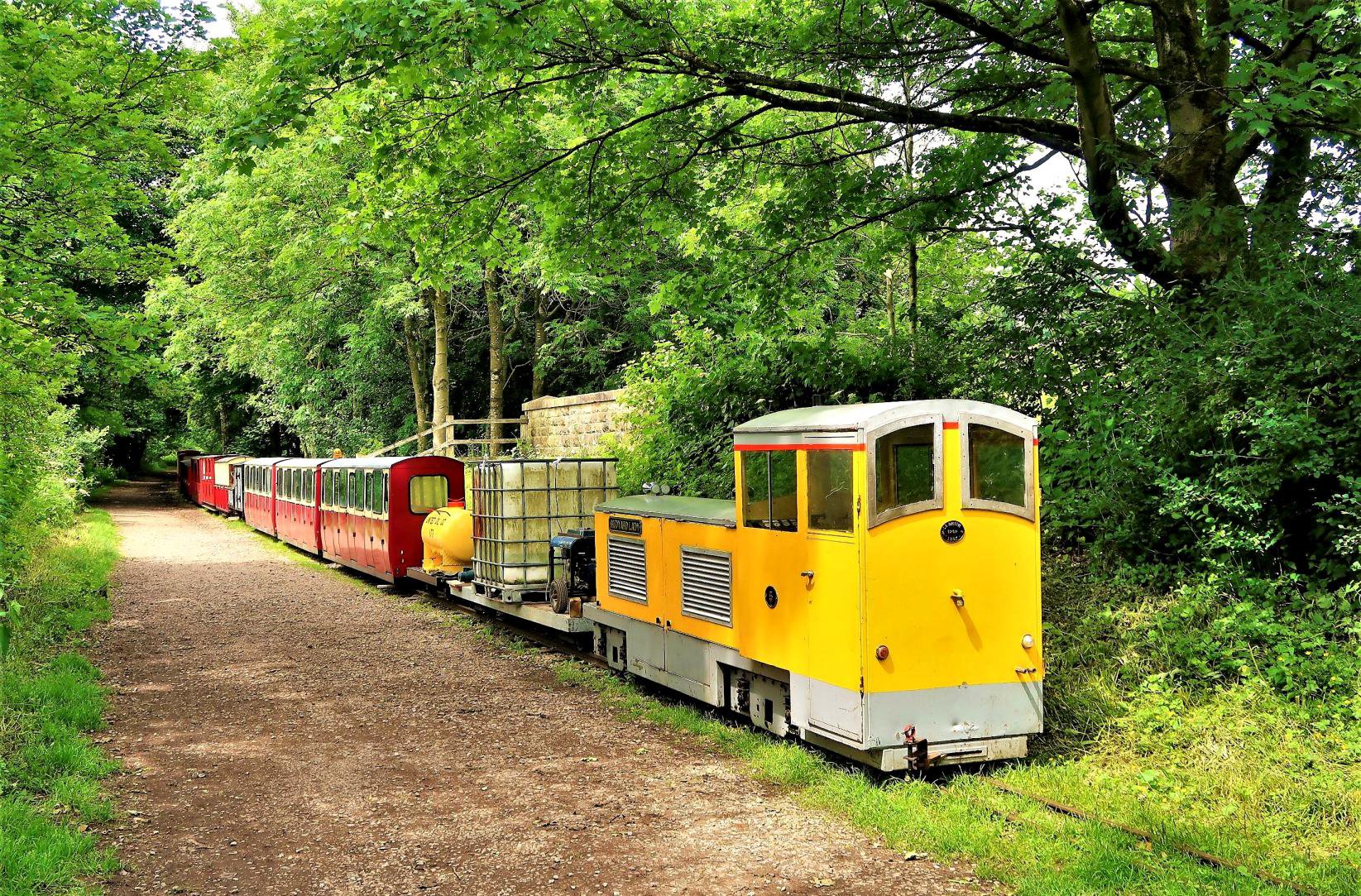 After lunch the stock on all the shed roads was moved to the running line north of Rudyard station making an unusual sight.
This view is typical of the lovely setting of the railway. There is plenty of width on the trackbed for the 10¼" gauge line and the good sized foot and cycle path.

Then there was an intermission while every item of rolling stock was hand-shunted out of the extensive new well equipped shed (erected over the winter with a new layout partly ready for the extension) and pushed up the line, apart from No.5 'Rudyard Lady'. We methodically did all six roads apart from the end of the one line that runs through the far door (blocked and the track beyond not yet connected anyway). The rest of the Rudyard station track was also traversed until everyone had done everything they wanted. After the stock had been returned to the shed there was a final steam trip to Hunthouse Wood with the usual run-round and propelling move and through the loop for the third time! This gave steam haulage to the end of line for those who had missed it earlier and had asked our organiser if it might be possible. 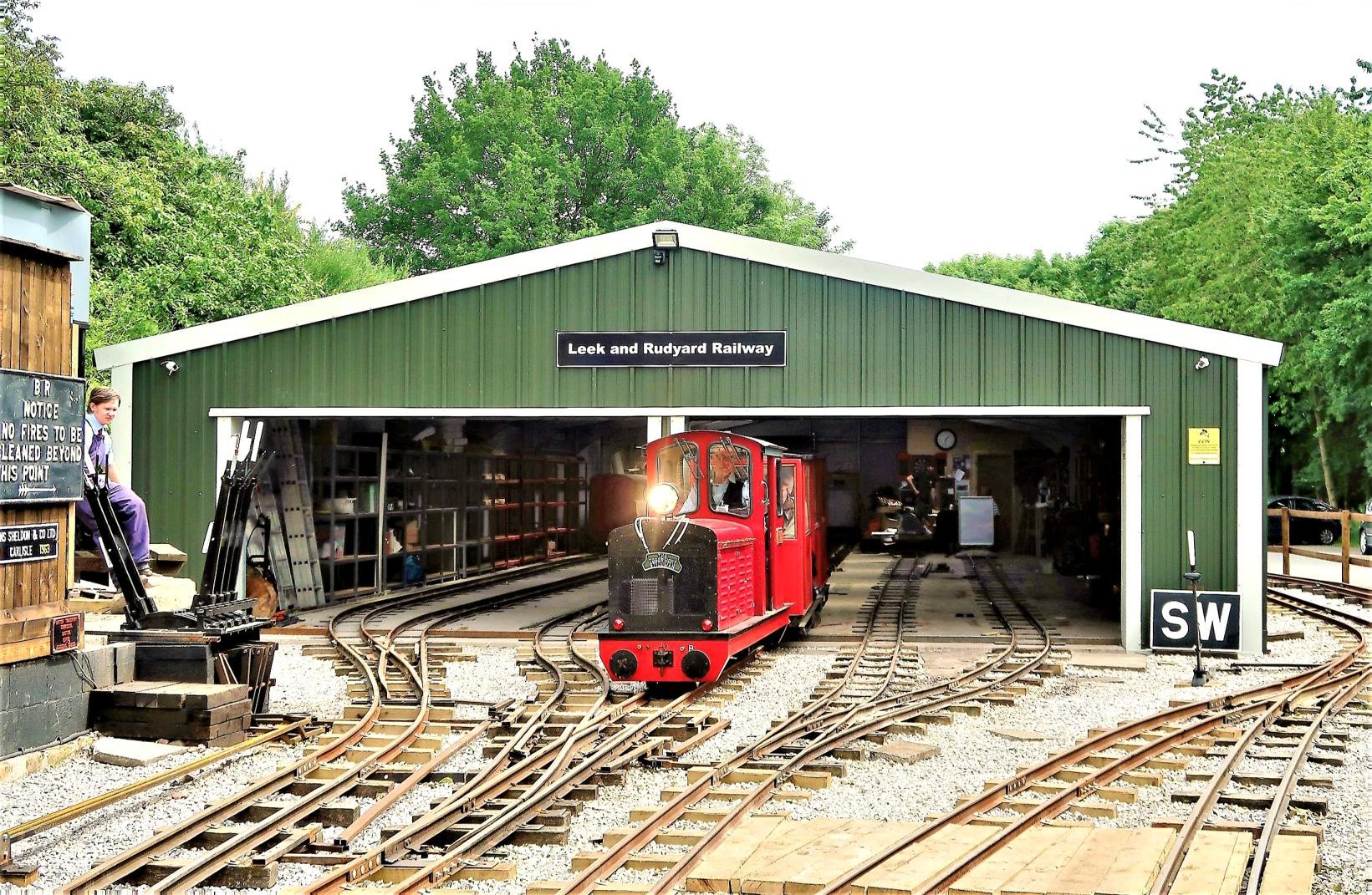 The new shed and track layout (all installed during the closure last winter) at the south end of Rudyard station; the track was all traversed by our tour.
Right of the shed is the start of the Leek extension; the fence far right was moved out to accommodate it. Note the railway name on the shed. 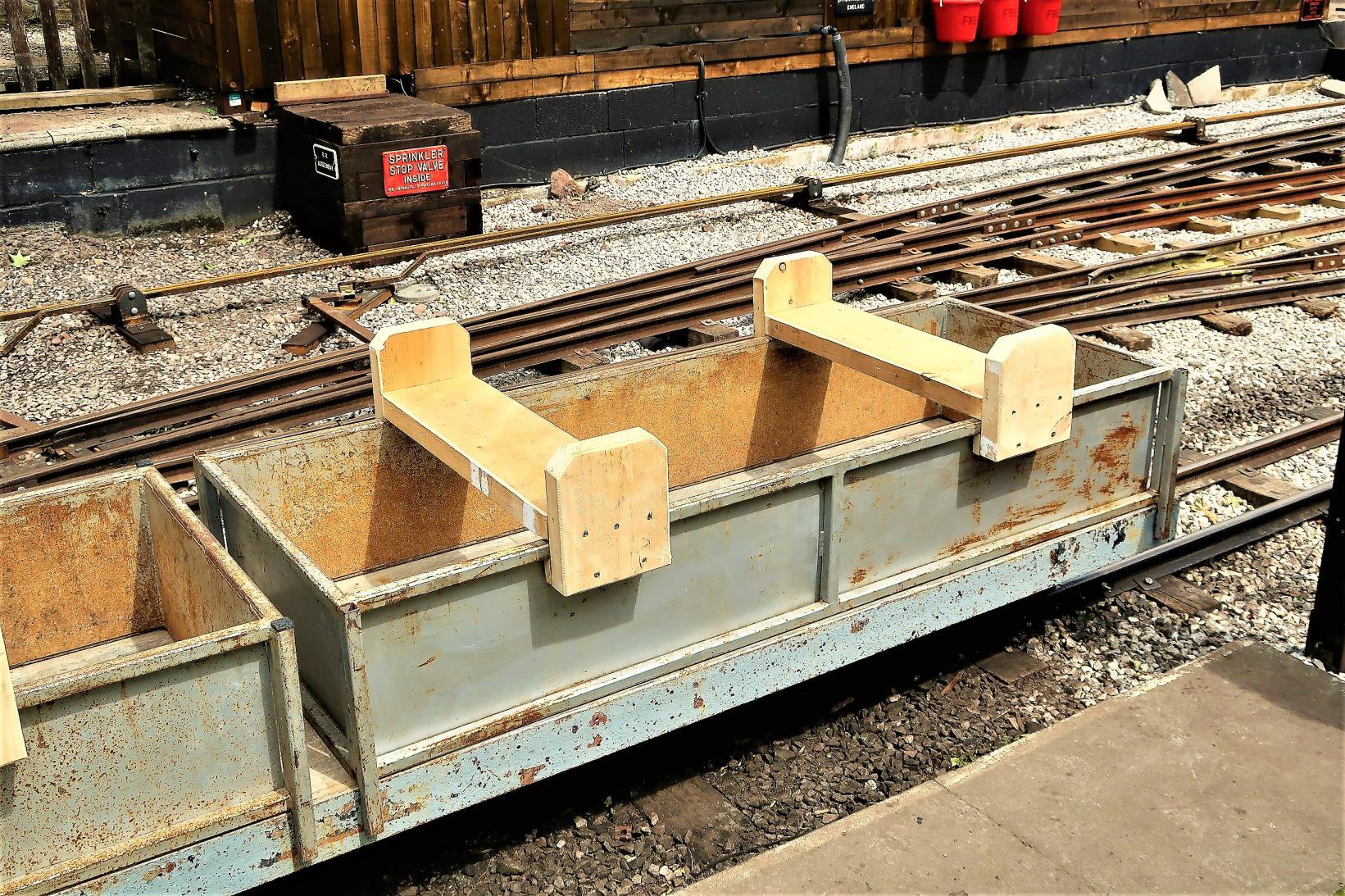 The specially converted vehicle used for our party to cover the start of the Leek extension.

The Rudyard Lake Railway staff were thanked for their considerable efforts that made our visit so enjoyable. Our visit to this very friendly railway with great prospects ended at 16.10 but there was a walk to do ... 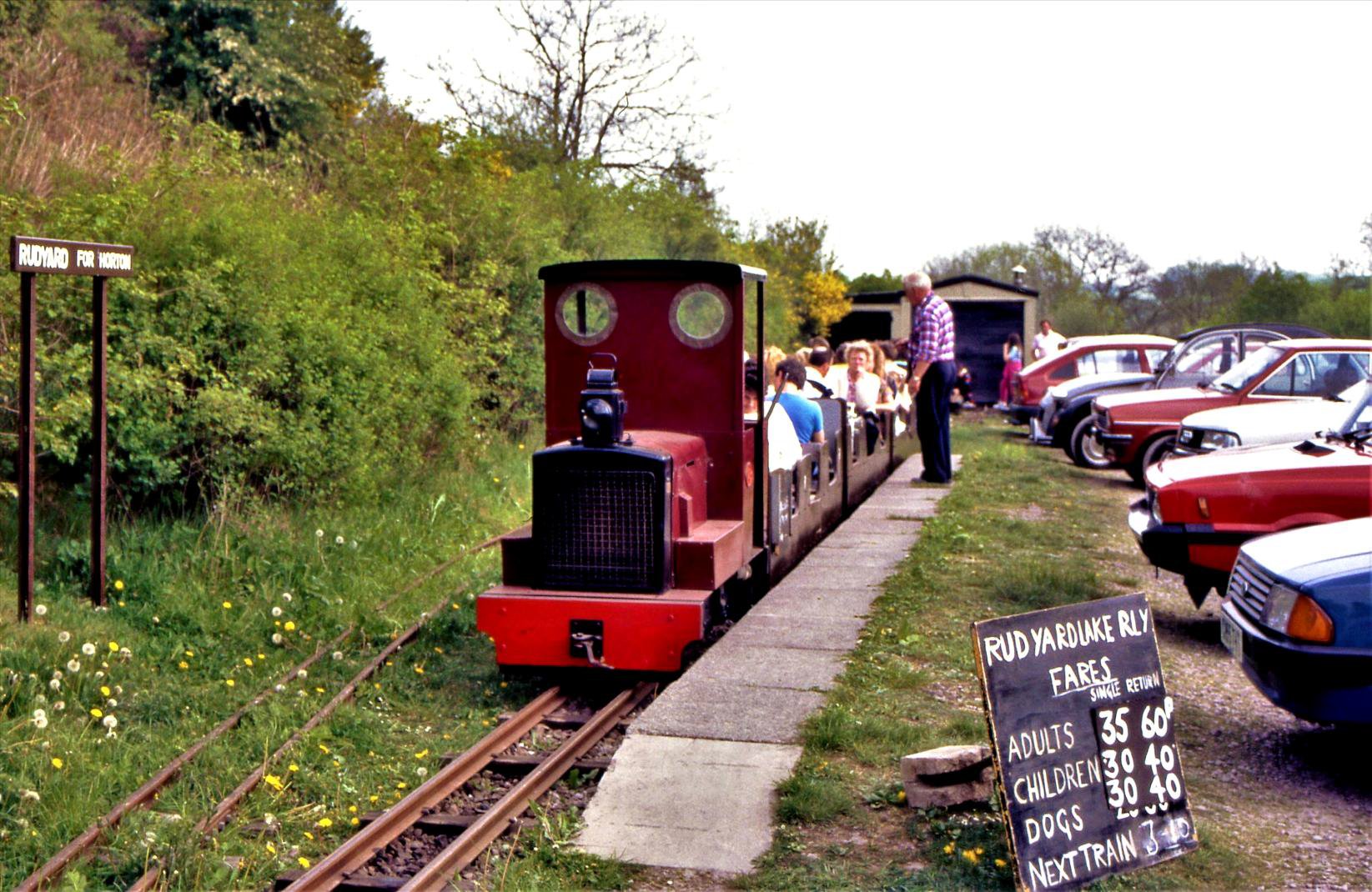 By way of contrast, a previous incarnation of the 10¼" gauge railway in May 1990 when it ran push-pull for
¾ mile between Rudyard and Lakeside. The present line is over 1¼ miles.