After meeting in Ashover Parish Hall car park, our group of 12 adults and two children set off in the warm afternoon sunshine along local footpaths towards the former Ashover Butts station. The station site and trackbed of the 1' 11½" gauge line can still be seen and we were also able to follow it into Ashover Butts Quarry which used to provide limestone traffic (mainly for road construction but also rail ballast), fluorspar for the iron & steel industry and a small amount of lead. The site of 'Where the Rainbow Ends' café was visited. It was dismantled after passenger services finished in 1947 and saved in store by the Ashover Light Railway Society who intend to re-erect it when a suitable site is found. 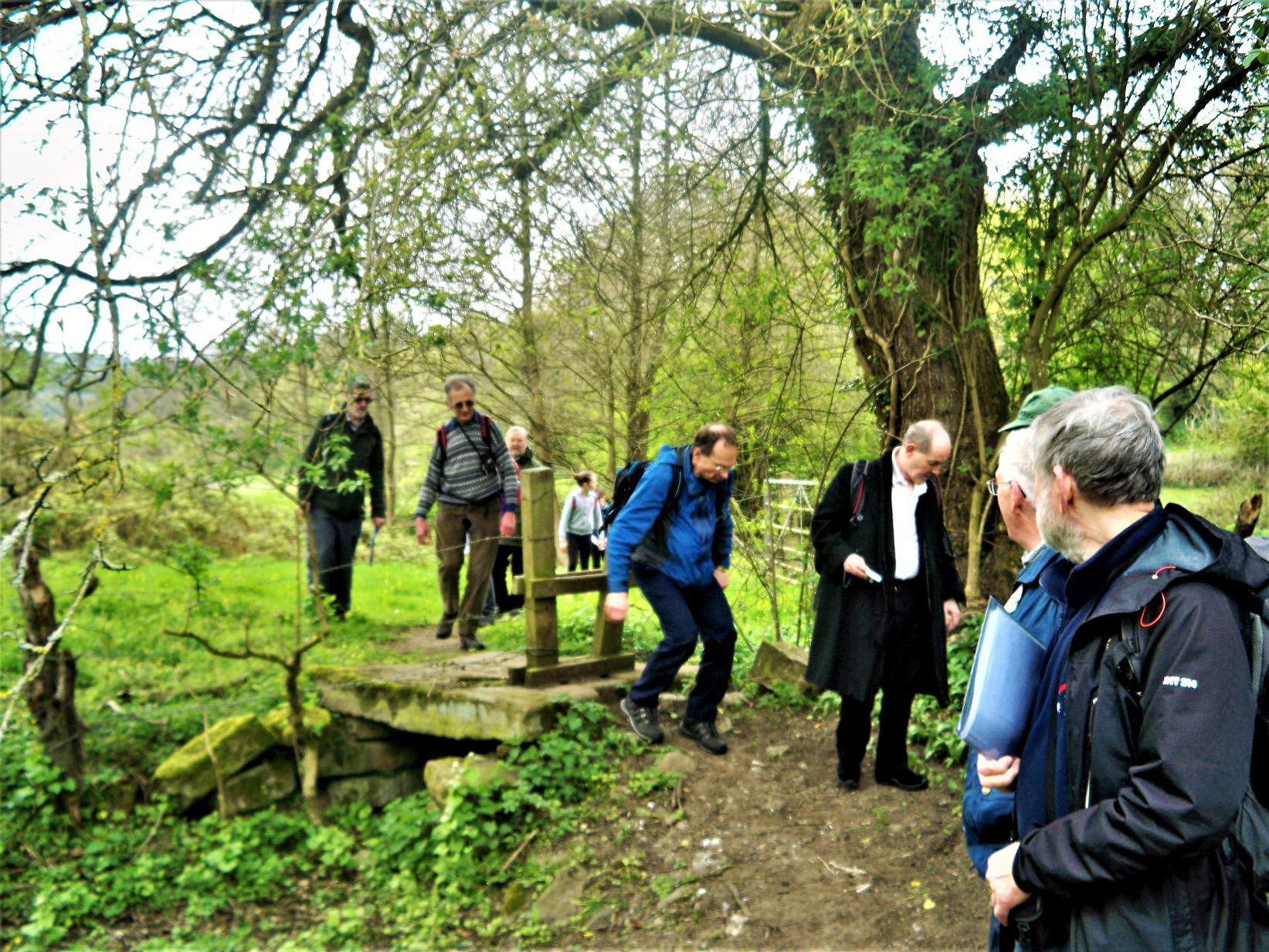 On continuing our walk it was clear that the railway crossed the River Amber several times as it meanders through the picturesque valley since former bridge abutments are visible in many places.

Walking back into the village we passed All Saints church, where members of Florence Nightingale's family are buried, before proceeding down a steep sunken lane to the old trackbed and site of the station at Salter Lane (for Ashover Village). 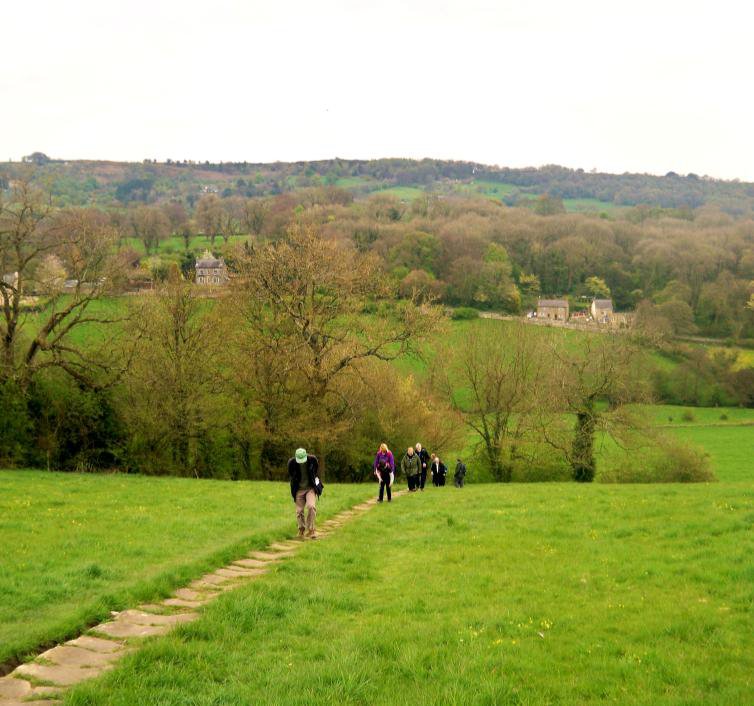 Any minute now Julie Andrews will pop up and sing 'The Hills are Alive with the Sound of Music…!
[© Neil Lewis 2017]

The trackbed is quite clearly visible here in both directions but unfortunately we were unable to walk along it as it is not a public right of way. Instead, the group went up the other side of the valley, taking a short (and very welcome!) break at the top of the hill by a cattle grid which (together with another grid further along) partly consists of old Ashover Light Railway (ALR) rails [regauged!], before continuing on to Overton Hall. This, along with its estate, was purchased by the Clay Cross Company in 1918 for £33,000 for the company to exploit the minerals and construct what was to be the last commercial narrow gauge railway in Britain in the pre-preservation era. The East Wing of Overton Hall is currently on the market for a guide price of £675,000!

After observing the small headstocks and old plant which remain from the lead mining industry near the Hall, we walked down the lane to the Miners Arms at Milltown (a halt on the railway) to see where the line ran alongside the pub. Its hospitality was enjoyed by the 90 enthusiasts from the Birmingham Locomotive Club who rode on the last ever passenger special over the line on 24 Aug 1947. 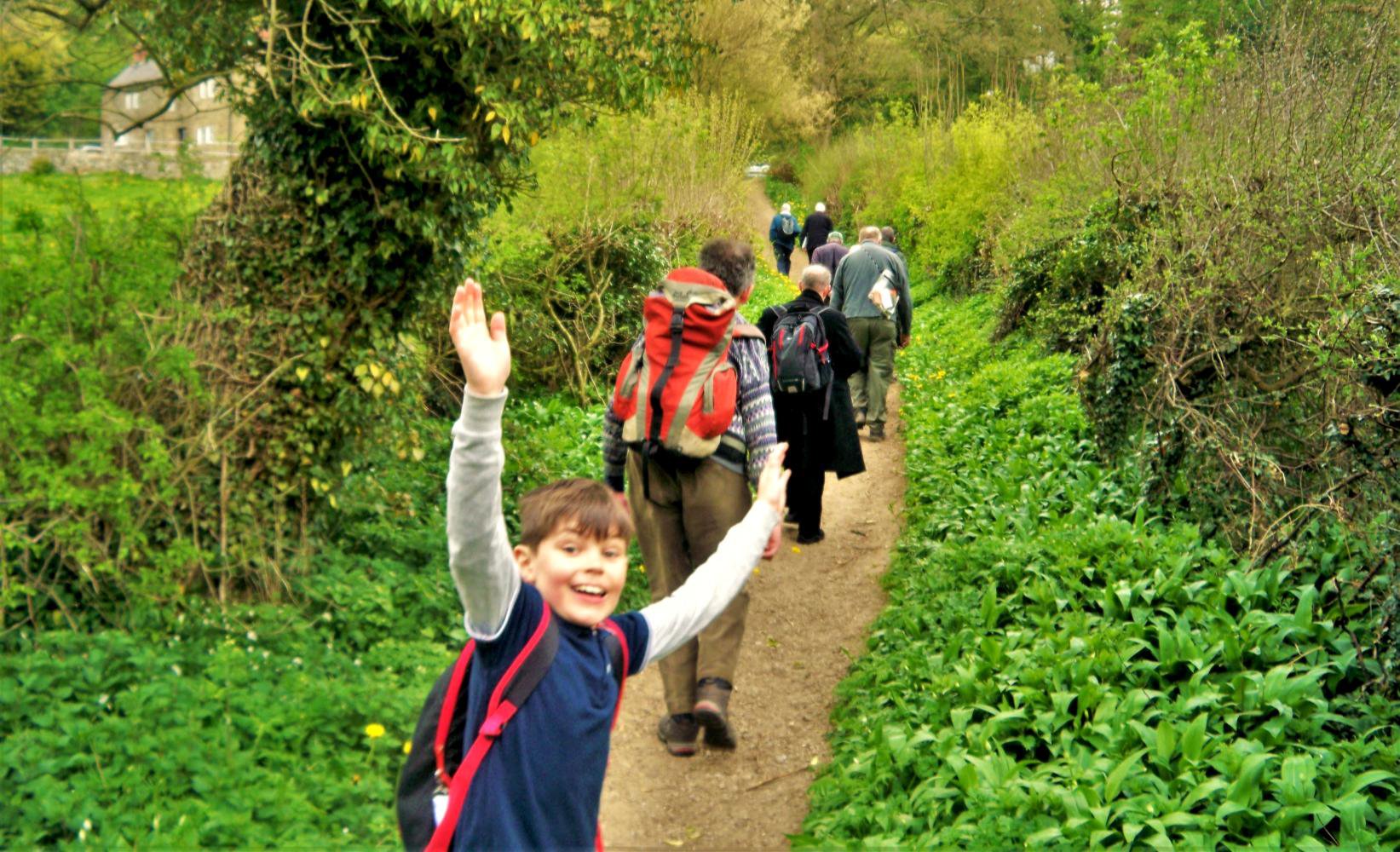 Our group then headed back towards Ashover via the halt at Fallgate where the old shelter still exists (along with a section of old track) in use as a store. Following the course of the railway we came to Milltown Quarry and saw the former stables, now part of private property, which housed the ponies that were used to pull wagons up a short incline. There is still some tram track visible in situ and we were also able to observe the old mill and powerhouse on the other side of the river.

Continuing towards Ashover, our two younger companions took some members to see another cattle grid which uses sections of ALR track, then we all walked back together to our starting point, passing on the way the Old Poets Corner public house, where guests at the opening ceremony of the ALR enjoyed a free drink in 1925 - no such luck for us though!

Thank to John Cameron for his organisational skills and historical notes (see BLN 1274.249 with map), and our local Chesterfield member Neil Lewis for leading us on a very interesting and informative walk. Neil also provided notes with an excellent collection of maps, photographs and other material relating to the ALR. Thanks to Ruby and Archie Lewis who ably assisted their dad throughout the walk. It is hoped to repeat the fixture and see other sections of this interesting and unusual line as well.