My 'maiden' report concentrates on my personal enjoyment on these trips which clean rusty rails. Our train was Chiltern Railways' (CR) 121034, one of the last two remaining Class 121 units then in regular main line service (which ceased after 19 May 2017). 121034 stood in the platform at Aylesbury photogenically resplendent, our guard dressed in a well presented 1950's - 60's BR style uniform. 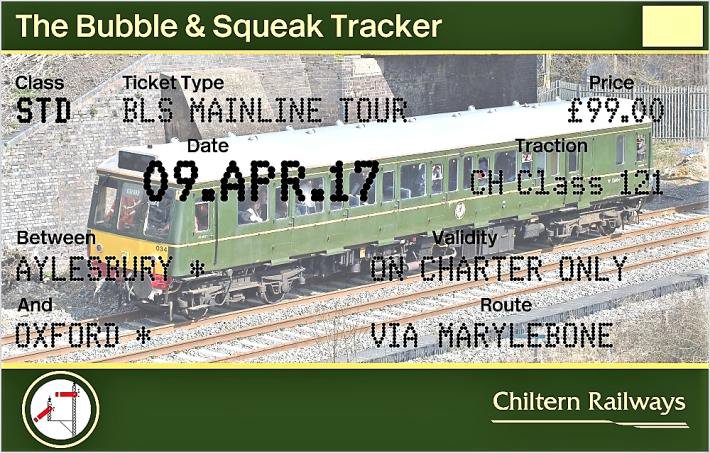 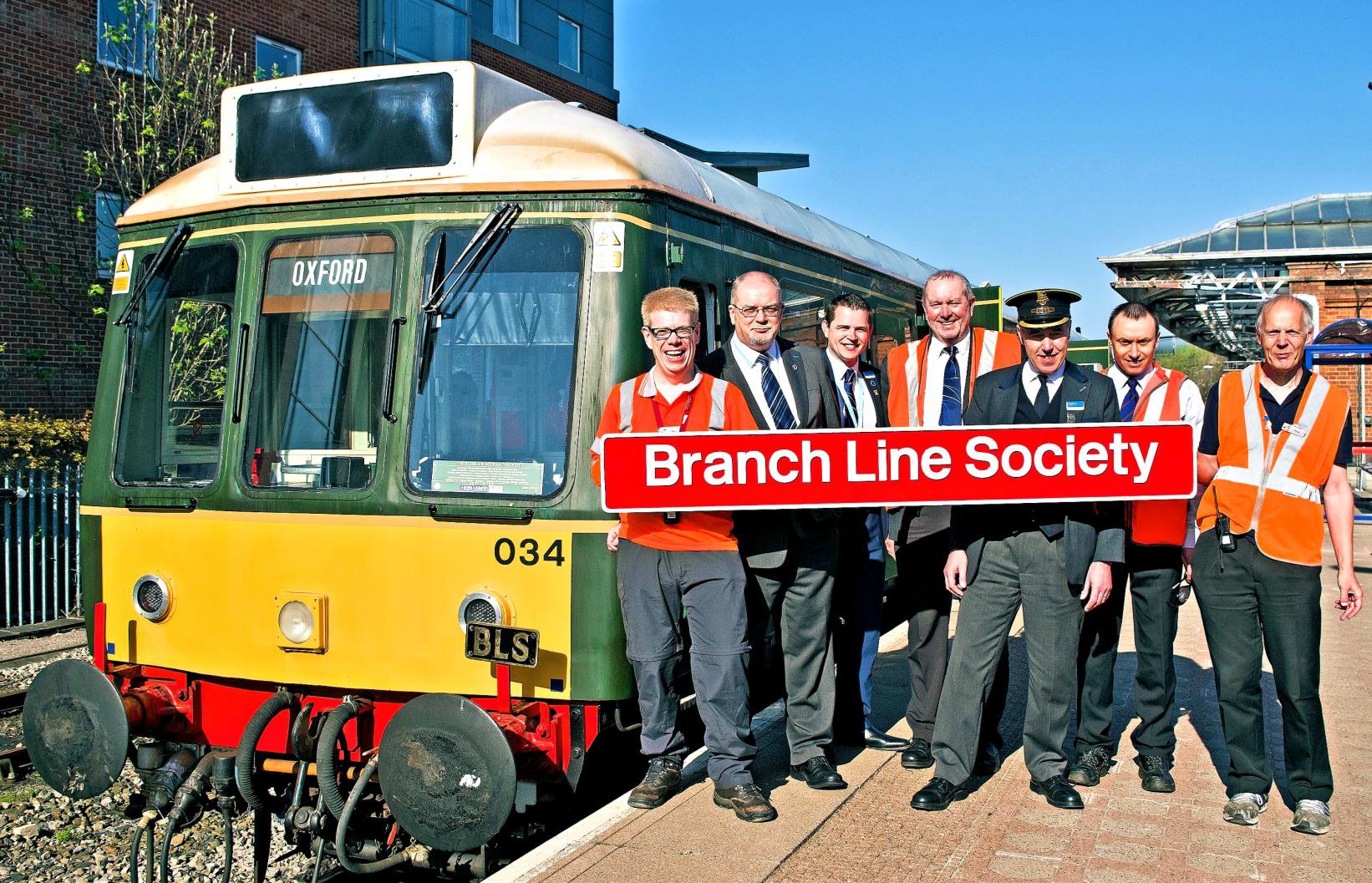 At Aylesbury P1 before departure in the morning.
[© Geoff Plumb 2017]

1Z20 left punctually to head directly onto the single line towards Princes Risborough, through the well maintained stations of Little Kimble and Monks Risborough. At Princes Risborough we passed non-stop through P2 south and, superbly, through Down P1 at Gerrards Cross in the Up direction.

Maintaining a good speed, the 'old girl' was slowed by 'double yellows' near Denham Golf Club to arrive, right time, in West Ruislip P4 Up Platform Loop, to allow faster service trains past our 70 mph restricted 'Bubble car'. Then we had a good run straight into Marylebone P3, busy even for a Sunday morning with that modern, definitive London cosmopolitan buzz. The CR staff were smart in appearance and well represented; the public admired 034 as they passed by. The station manager and a relative joined for the ride as far as South Ruislip.

The route taken in detail, with thanks to Martyn Brailsford

Those standing near windows heard the engines' throaty roar as they pushed now 1Z34 up the significant gradient through St John's Wood and Hampstead tunnels. This was followed by a very spirited and entertaining run to South Ruislip for a pathing stop where our guests left. Next was High Wycombe P1 for another pathing respite. We reversed and moved over to Signal ME641 on the Up Main, reversing again back onto the Down Main and headed northwards towards Bicester. Then at Princes Risborough, there was another weave from Down Main to Up Main for 'wrong line' running through P2 before regaining the Down line. 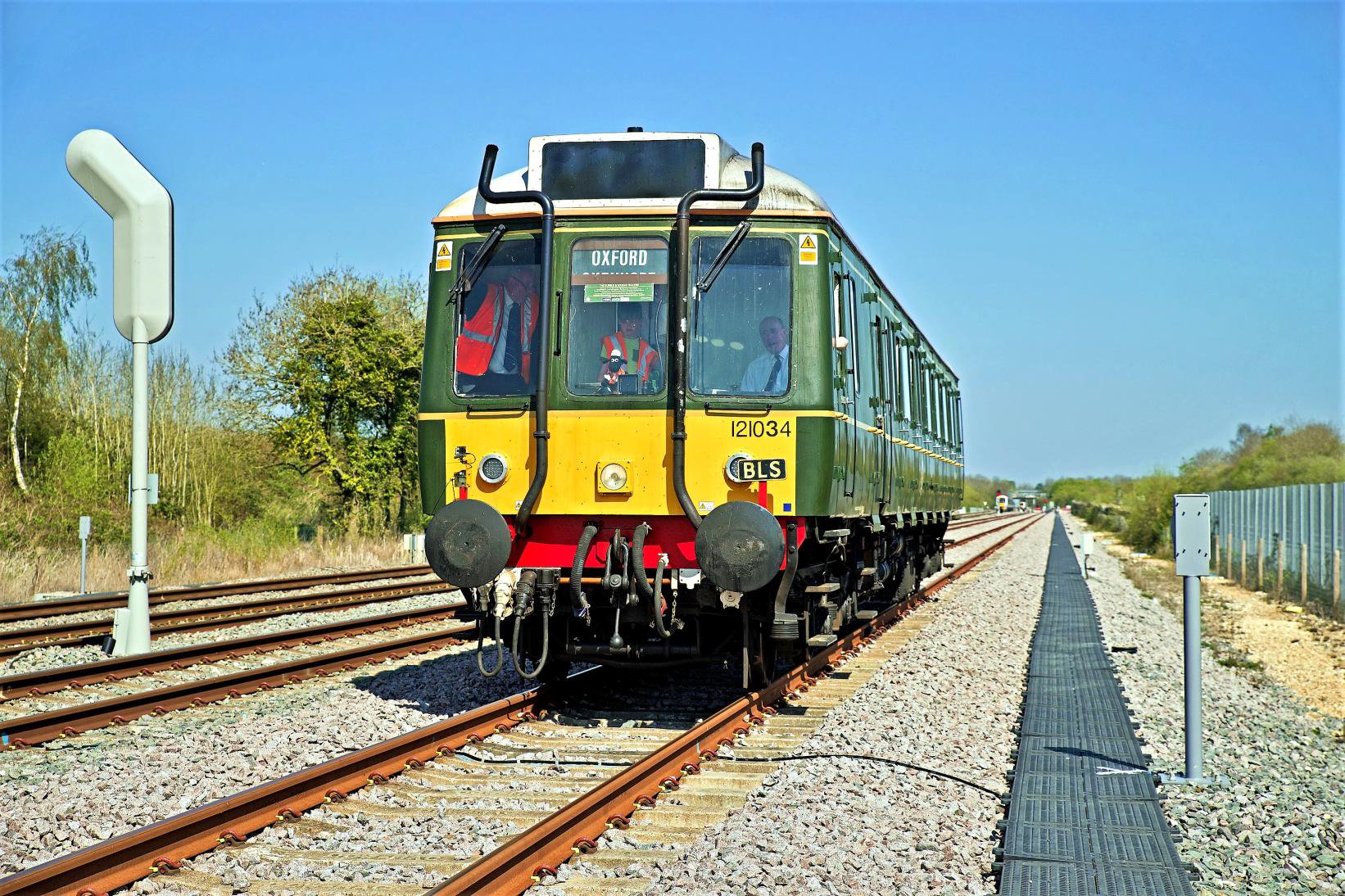 'Looping' in Bicester MoD Goods Loop run-round; right is the depot.
Those with excellent eyesight will see Up and Down Chiltern DMUs in the background behind the train.
[© Geoff Plumb 2017]

Then towards the Bicester area where we left the GWR New Line at the recently installed Bicester South Jn, quickly passing along the new chord to Gavray Jn on the LNWR route once from Oxford Rewley Road to Cambridge. Next Bicester Village, formerly Bicester Town before slowing for the next 'looping' in Bicester MoD Goods Loop run-round.

The connection from the current loop into the depot showed significant recent use, despite internal movements now being by road. There were once direct passenger trains from inside the depot to London Euston and Oxford Rewley Road, the latter hauled by WD locomotives with Royal Engineer crews. Moving out of the loop we headed towards Oxford Parkway and into P1 at Oxford, before reversing into Road 1 of the Oxford Down Carriage Siding and then back into P2.

Now 1Z65, the DMU retraced its tracks to Bicester Depot loop, crossing Bicester West Jn to enter the actual loop, thus covering both its tracks. Then through Bicester Village 'wrong line'. Leaving the Village (shades of No.6?), we crossed Gavray Jn again to the Up line onto the 'virtually disused' line towards Bletchley to meet the Aylesbury line (curve from the former Calvert Jn) at Claydon L&NE Jn. As we headed into the run-round loop there, our driver took us to the fence at the end of the line (12m 00ch from Bletchley; it is 'mothballed' beyond), to a spontaneous round of applause from the 65 participants! Then a reversal and left turn to the Aylesbury line and past Calvert Waste Transfer site. 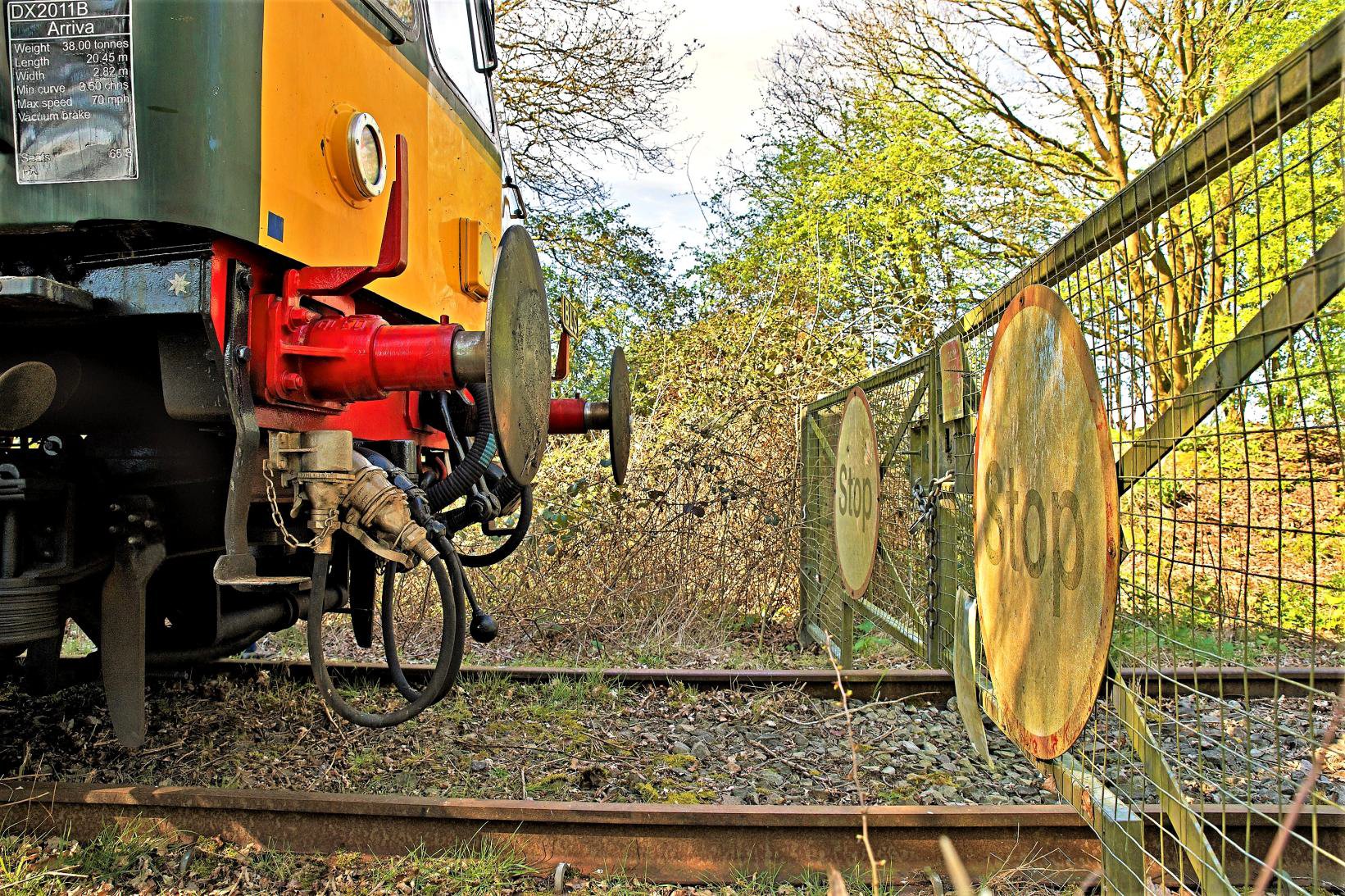 Claydon Gates: The east end of the run-round loop head shunt, just before 12m 00ch from Bletchley (to the right and 'mothballed'), the future East West Rail.
[© Geoff Plumb 2017] 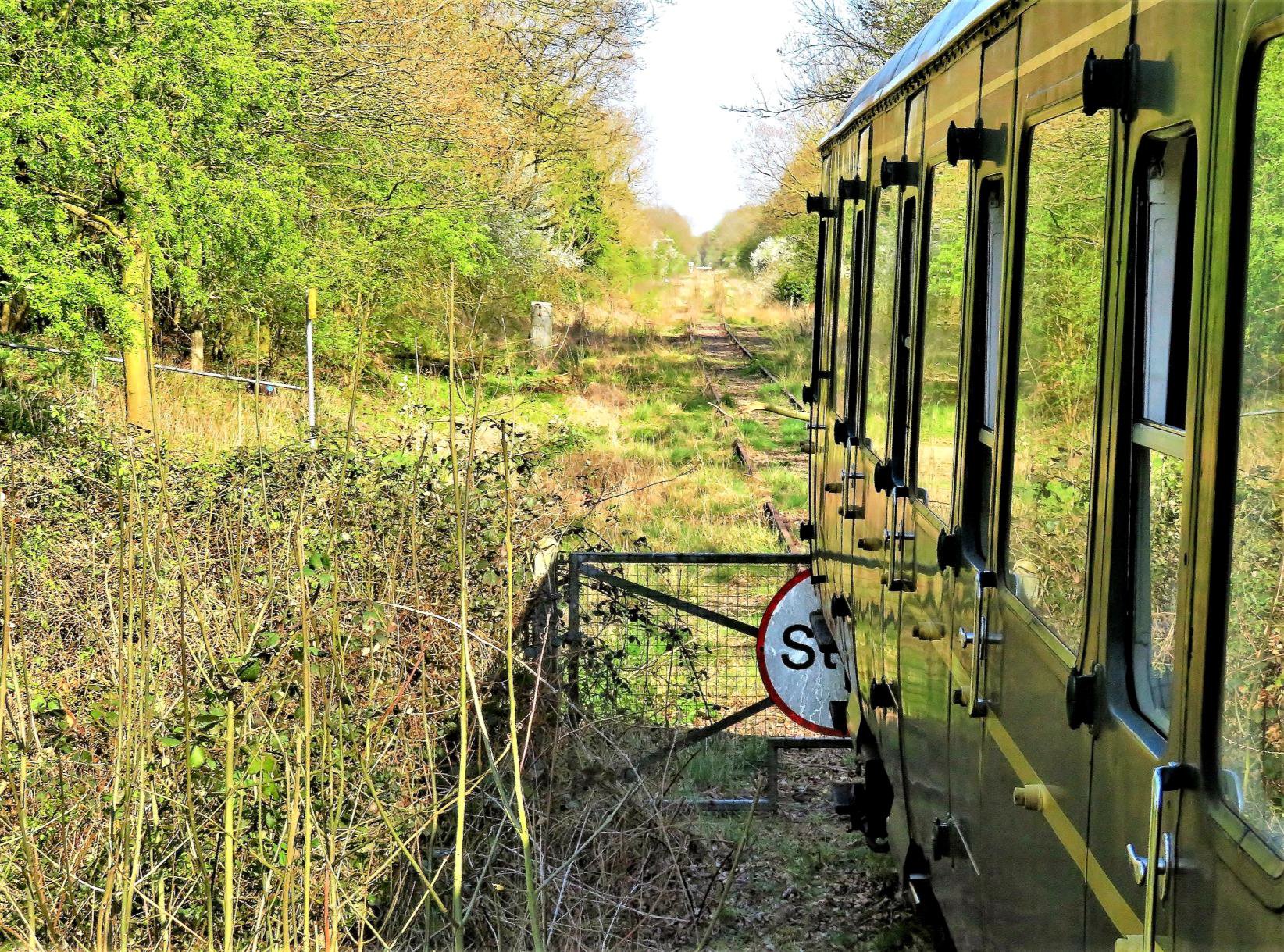 Claydon Gates: The same location from the train looking towards Bletchley.
[© John Zabernick 2017] 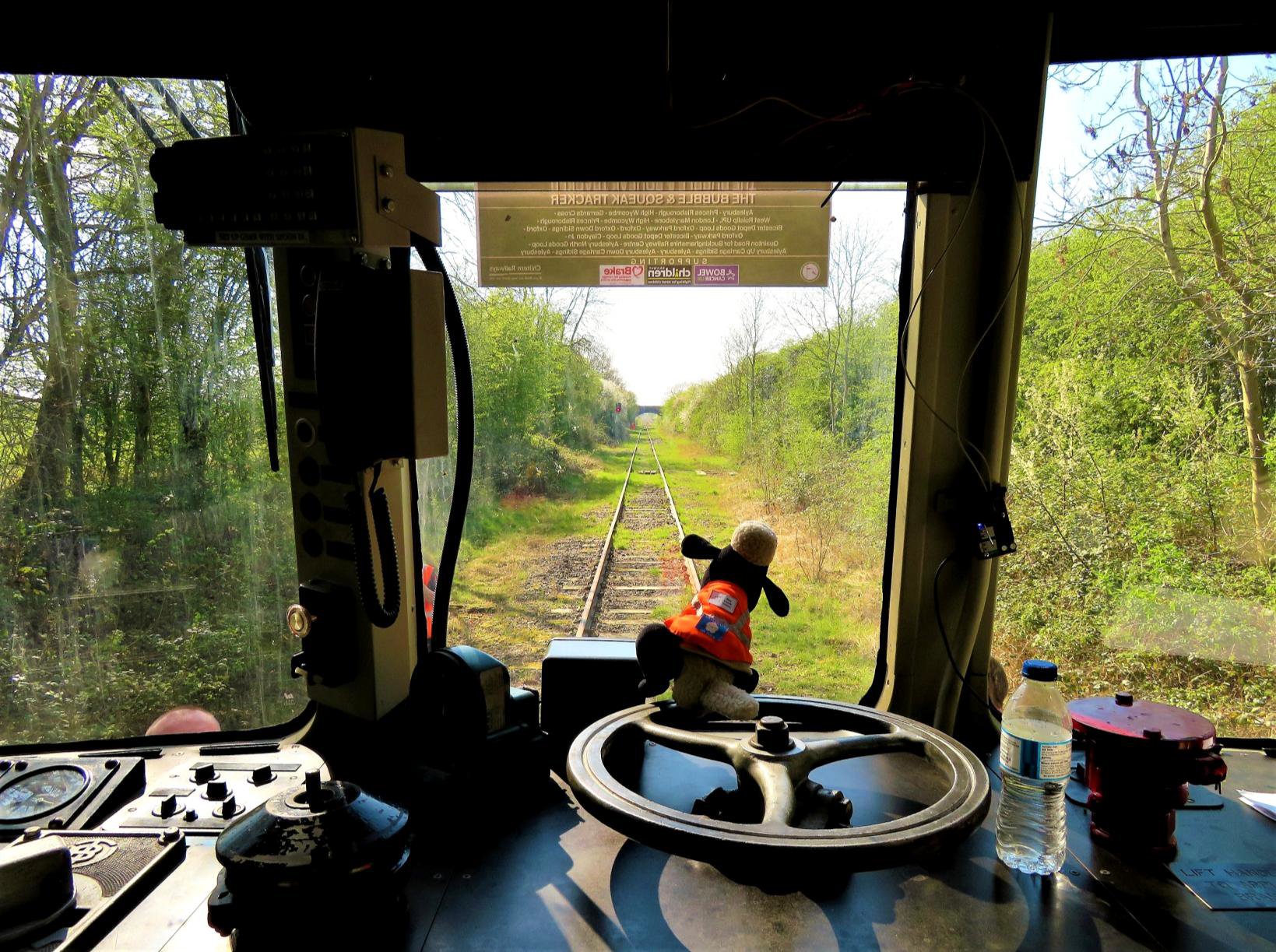 Claydon Gates: From the other DMU cab, a sheepish picture looking back at Claydon loop.
[© John Zabernick 2017] 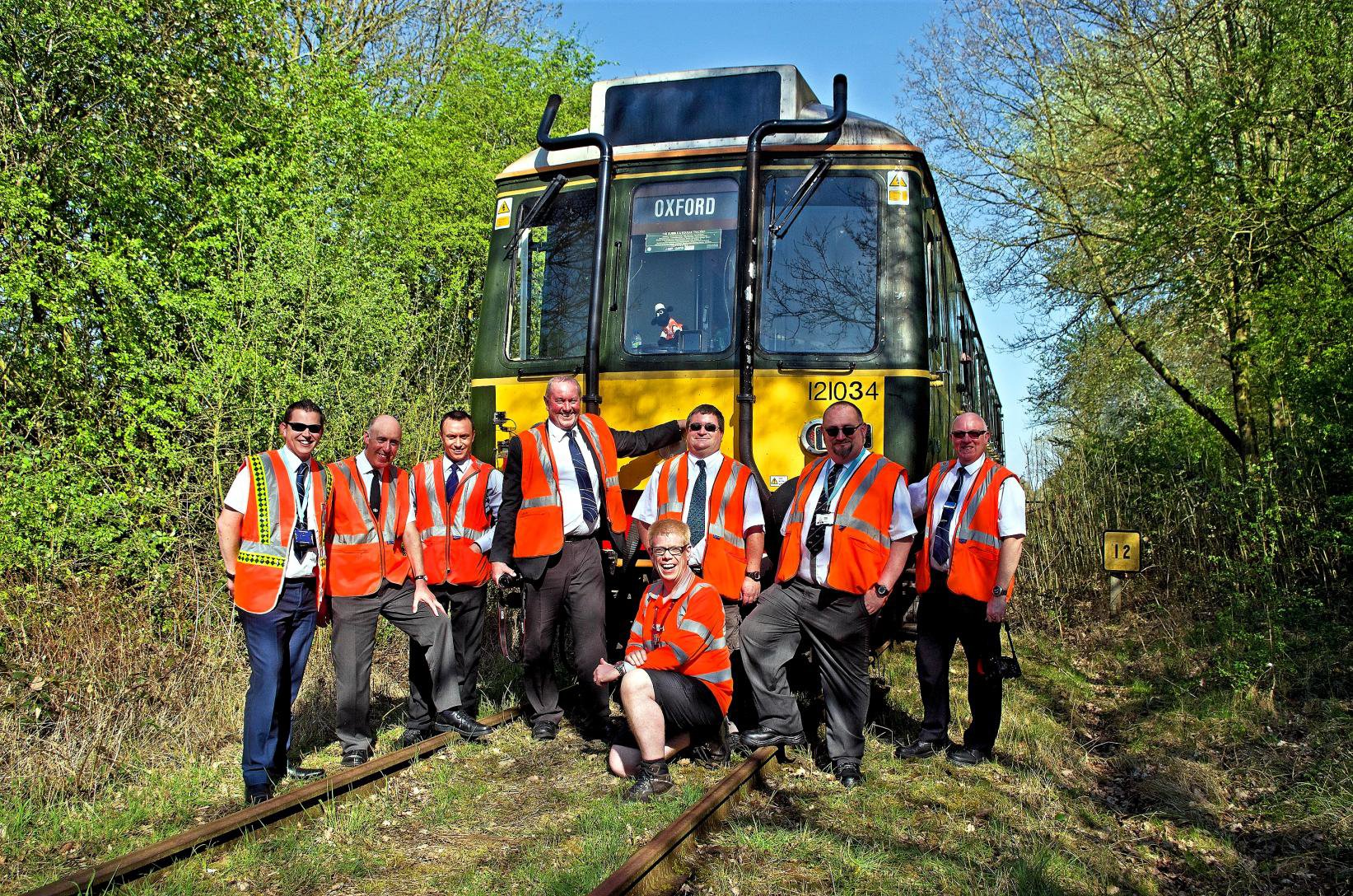 Claydon Gates: Chiltern staff; Kev Adlam and Shaun the sheep - (who was really in charge and
has done more rail trips than most people have had hot lamb dinners) MP 12 in glorious sunshine.
[© Geoff Plumb 2017] 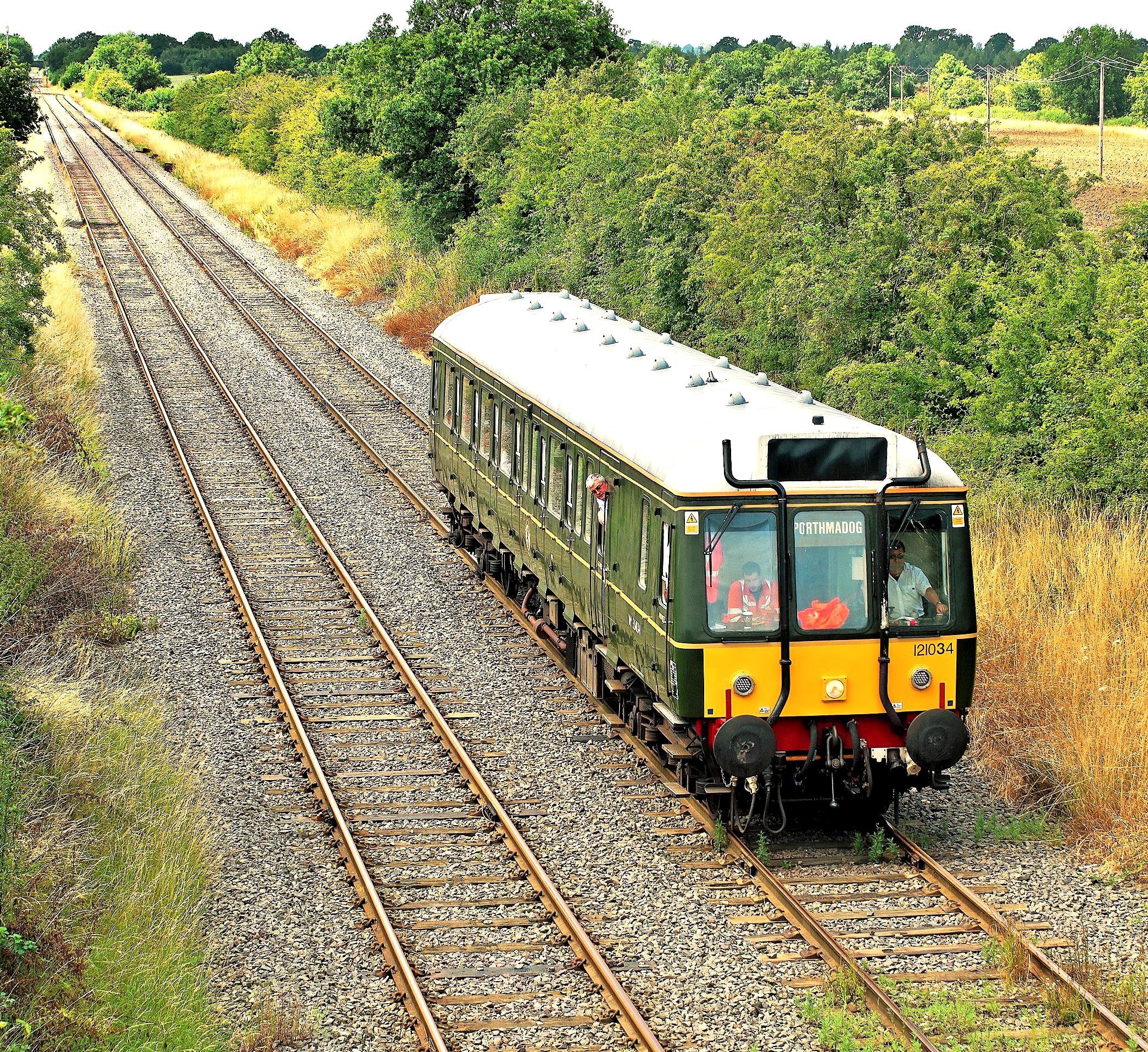 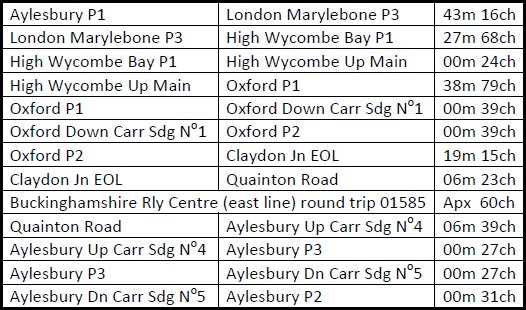 The mileage above and souvenir ticket are thanks to Jim Sellens who also looks after Shaun the Sheep. 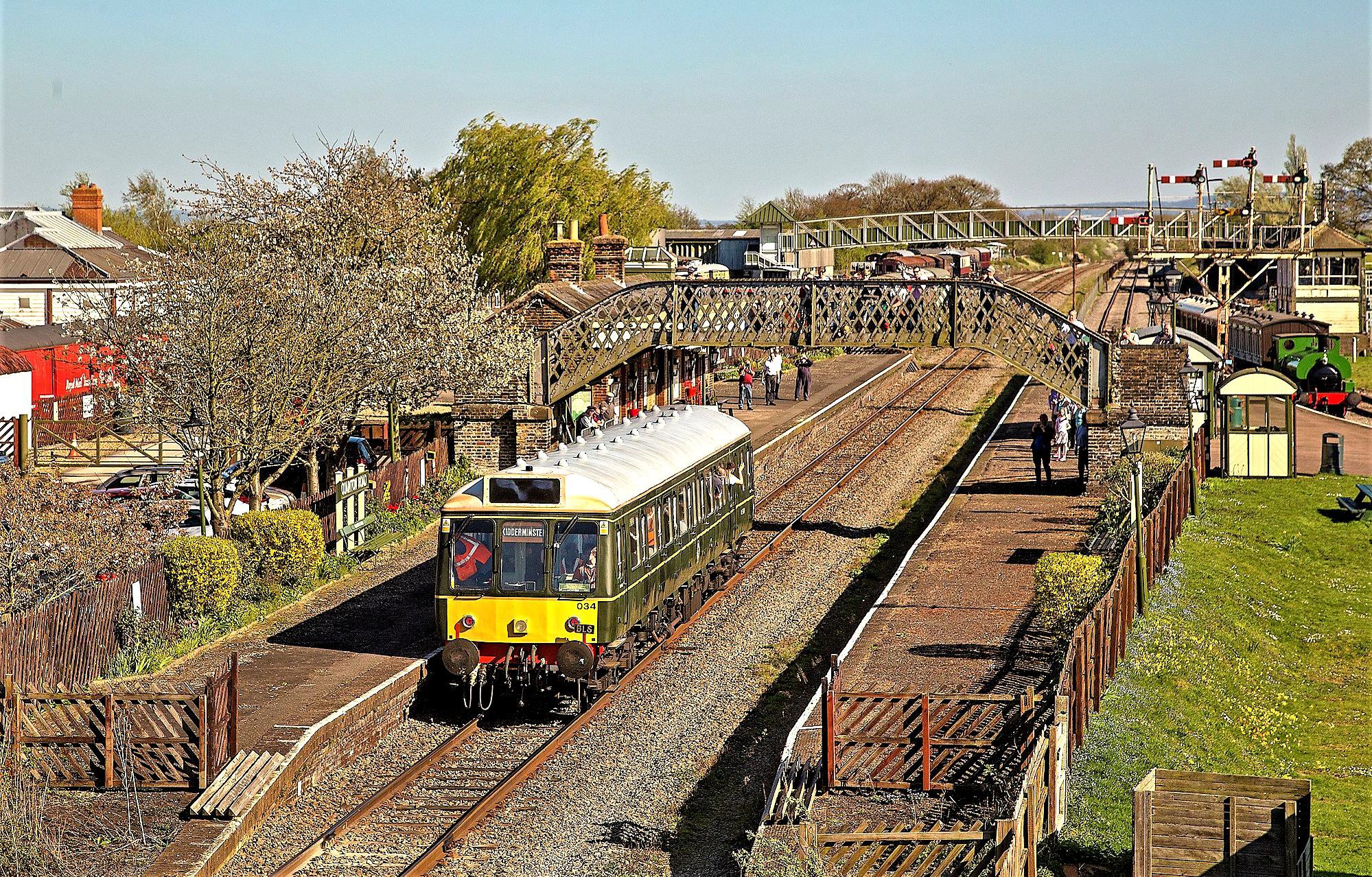 Next, arrival at Quainton Road station for the Buckinghamshire Railway Centre where we were welcomed with brake van trips on the 'eastern' demonstration track, hauled appropriately by ex-CR Wembley Depot 'Scaz', including sections each end not used on the normal public runs. The more adventurous members even managed an impromptu rare route trip on the Model Engineers' miniature railway!

We left here at 17.00 to continue south along the Aylesbury line, passing by Aylesbury Parkway station and through Aylesbury North Goods Loop before entering Aylesbury P3. The initial move was to Carriage Siding 4, back into P3 then Siding 5, our final unusual track before terminating in P2, thereby visiting all three platforms. 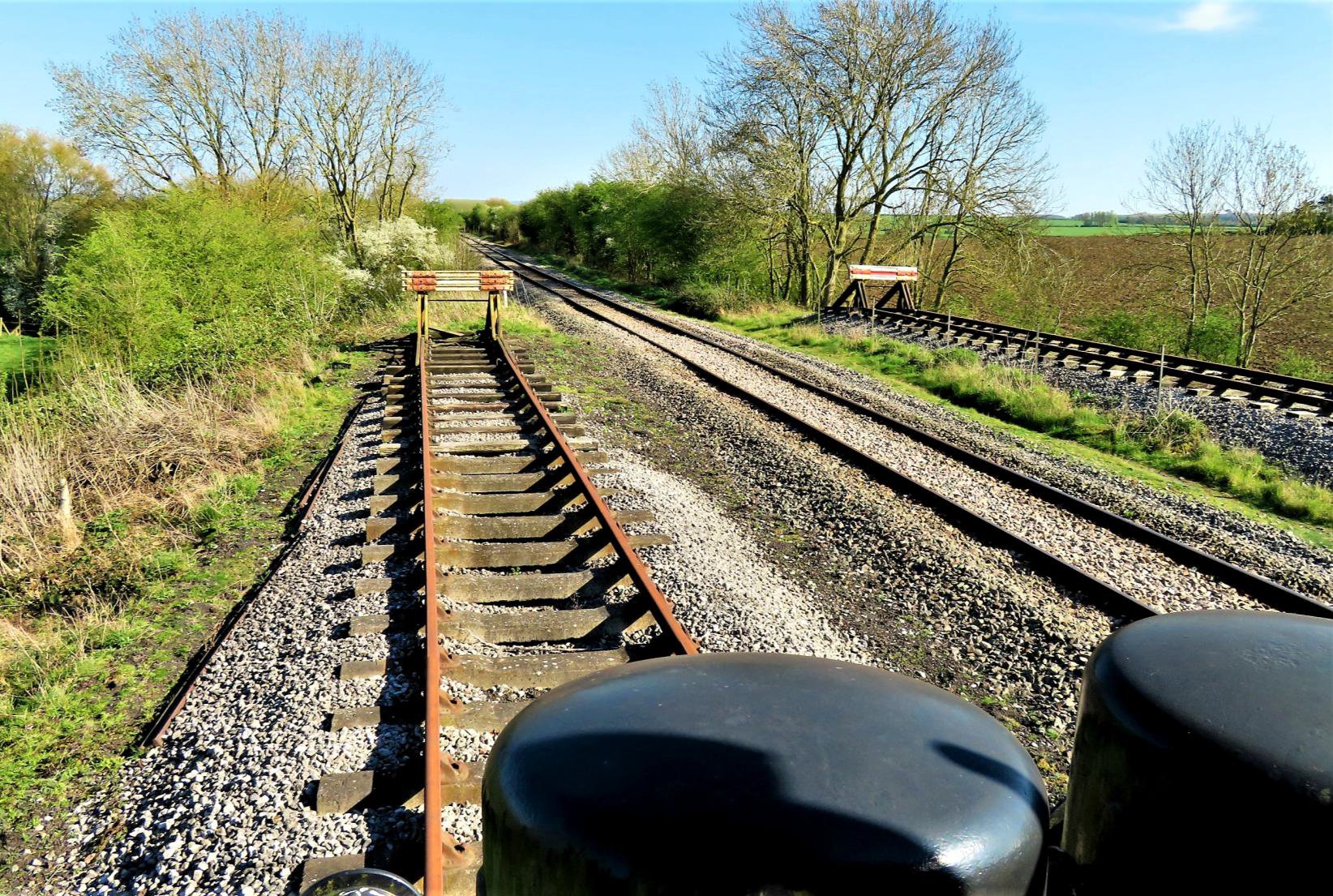 Thanks to Kev & Co for a very interesting and enjoyable day, good track, good stock and good company, raising £1,151.75 for Railway Children and £2,303.49 each to Brake (the road safety charity) and Bowel Cancer UK. This was a very good result with only 65 on board (although fully booked of course). The 'Bubble & Squeak' was a fitting farewell to Heritage DMU use in non-heritage railway operation. For the record the Aylesbury to Quainton Road Bank Holiday Monday shuttle on 1 May ran with a Chiltern Heritage DMU for the last time.