Out of bed 02.55 on 18th March 2017. Left home 03.58 driving with one booked stop close to Birkbeck station to pick up my friend from the North. He was on a lodging turn at his nearby son's. No trams or trains were seen on the railway overbridge which I, and many others I would see during the day, had crossed on our 442 Farewell railtour six days earlier. Parked north of the Euston Road and joined the merry throng by King's Cross P0/1. The throng this time was limited to booked passengers, plus one I understand wanting to buy cake, for the HST (in their 40th birthday year) in PI. Joined the HST, departed 05.32, two minutes down. There was an amount of hesitation, repetition and deviation on the journey, I will list the first and third later. The repetition, ignoring crossovers, was going through the Down platform at Bowes Park twice. 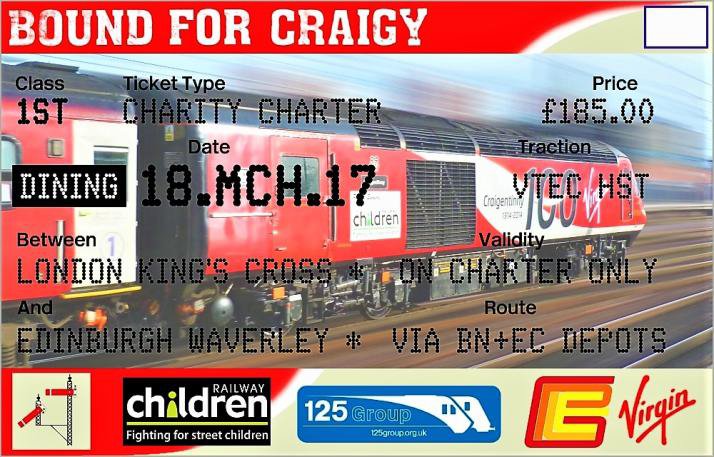 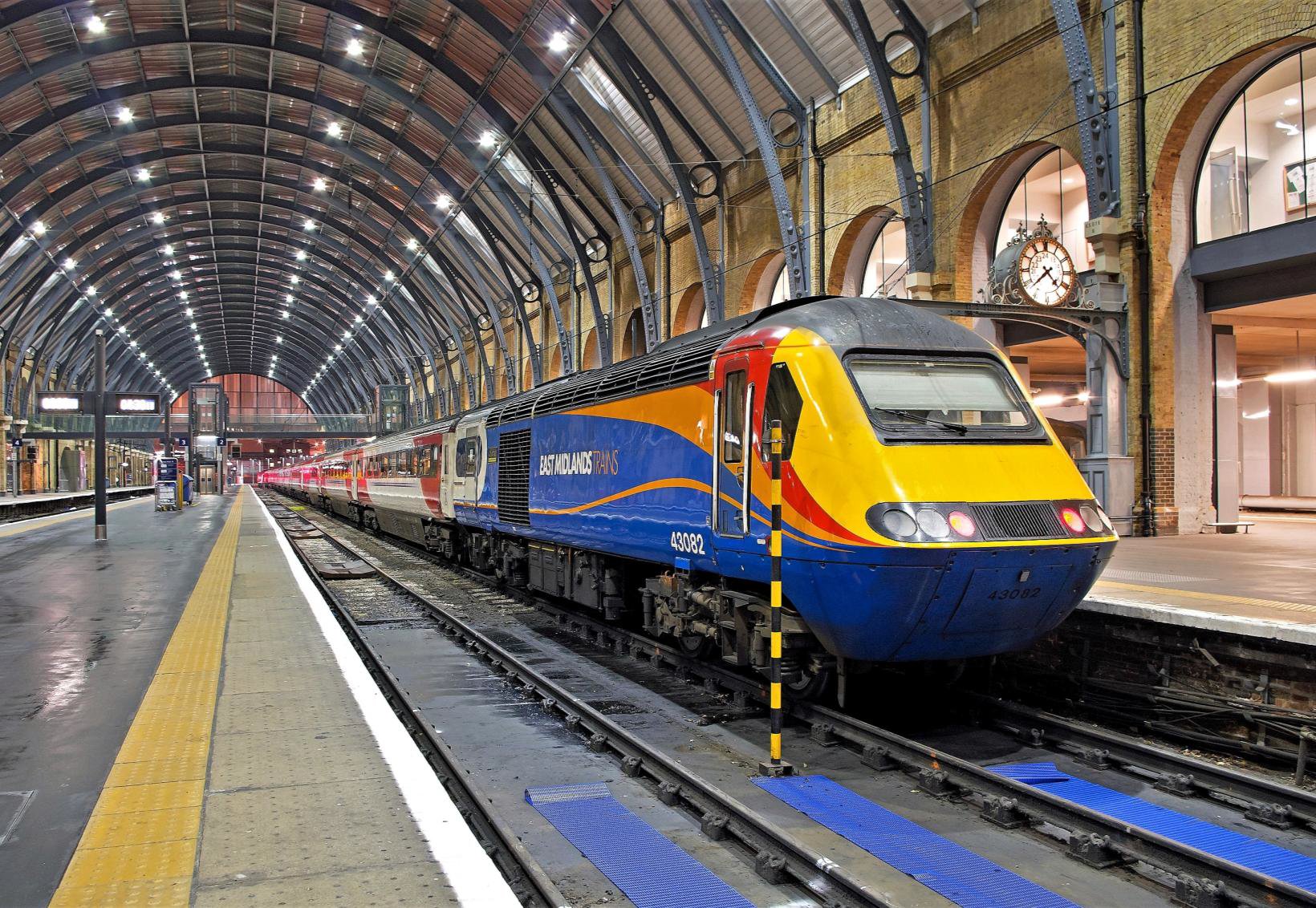 Fate had been tempted. Fate did not miss a chance. An announcement came on the HST that dining would not be as the elaborate menu set out. The full contents had not been loaded on to the train. The diners did not go short, but it was more in line with Virgin service train fare. It was prescient of Kev to set up another mobile 'Bubble & Squeak' (our 9 Apr Chiltern railtour), a healthier alternative to the one that dropped off the menu. A later announcement was that the bacon rolls had all gone, but this would be rectified at the next station call - Doncaster (and it was). 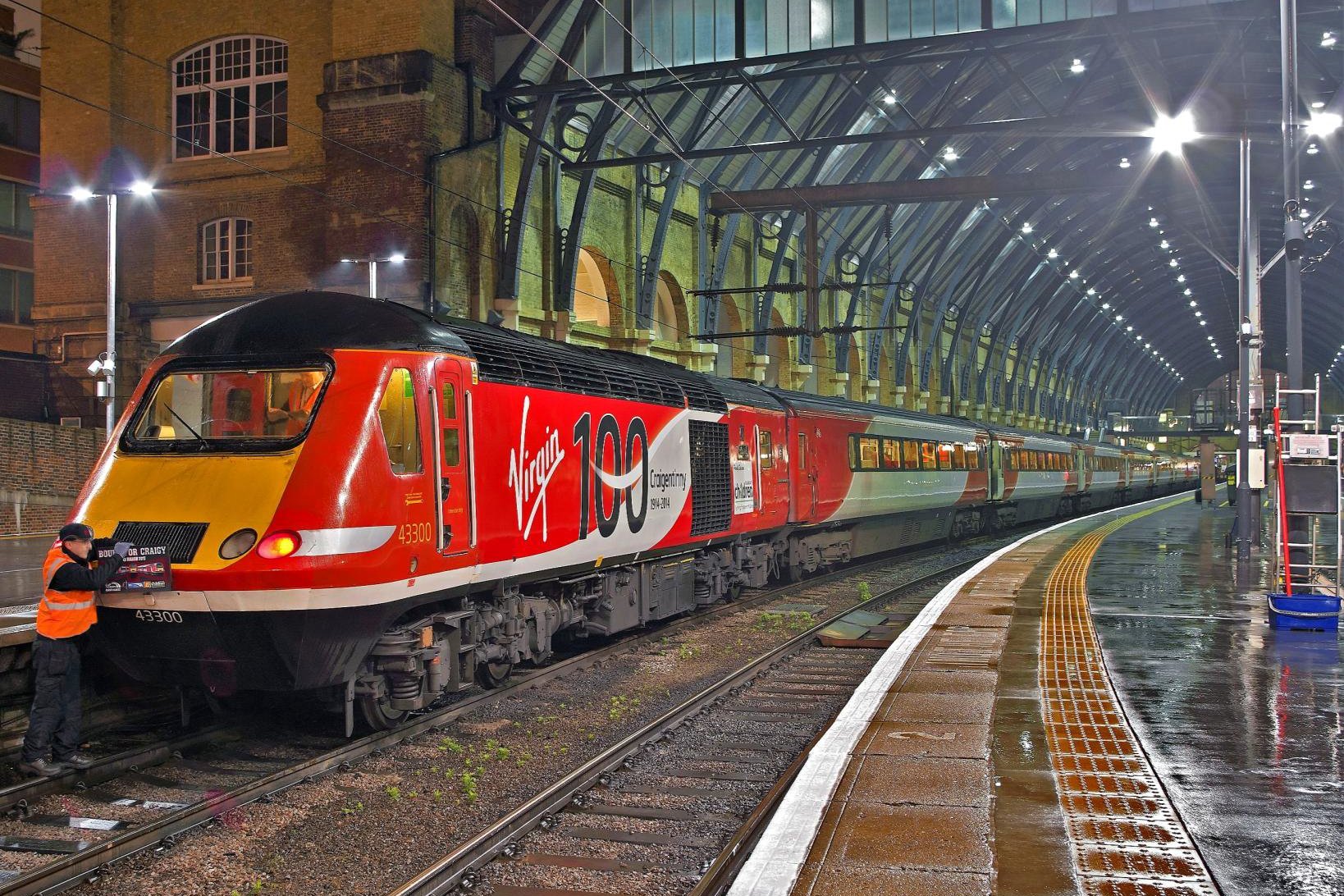 A bespoke lamp iron bracket had been made to fit the 'Bound for Craigy' headboard onto 43300 'Craigentinny 100' so that it remained in place during the high speed sections of the tour! It was quite an operation to fit it at King's Cross before departure at 05.30; initial destination was Bounds Green Depot!
[© Geoff Plumb 2017] 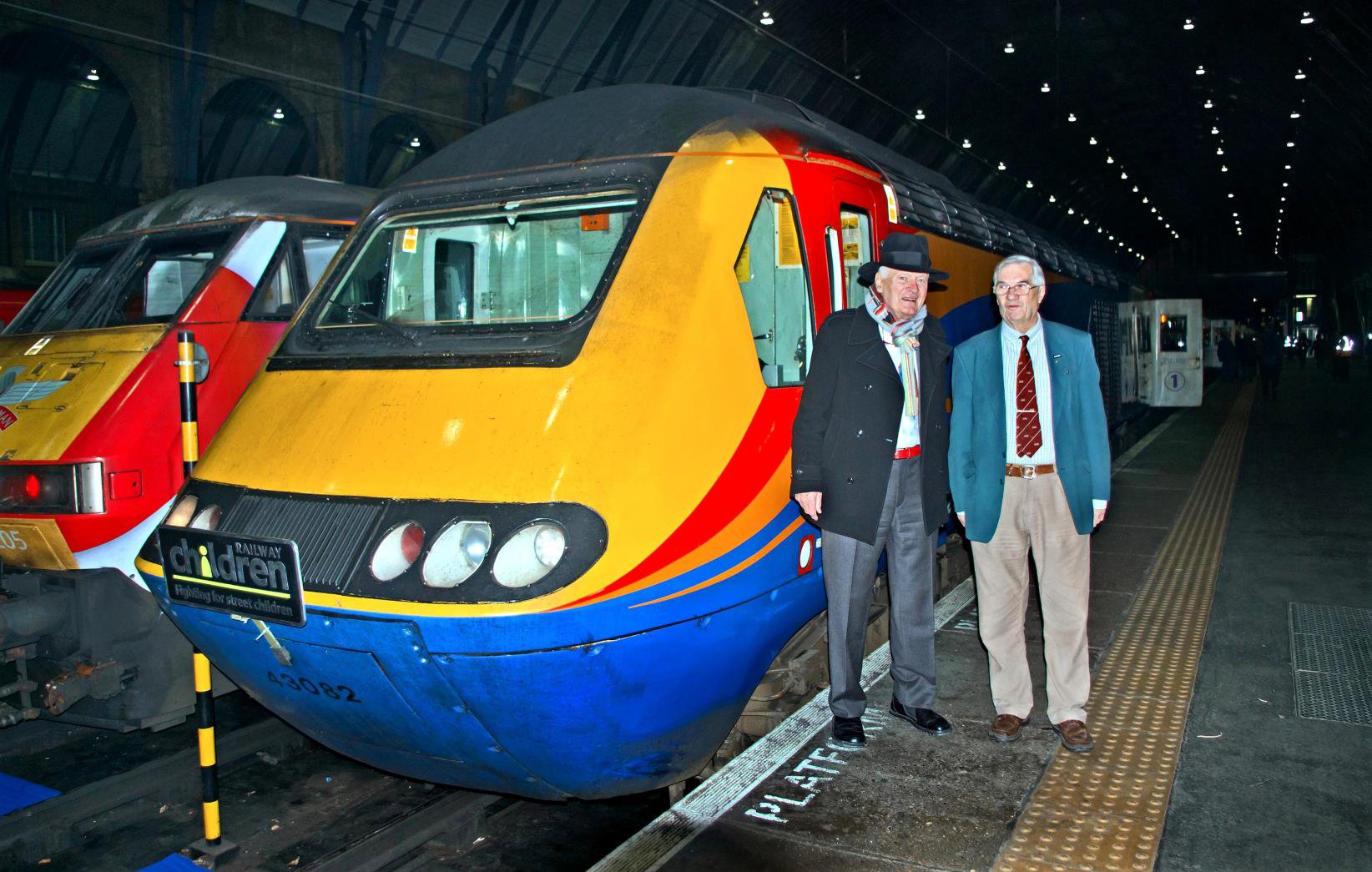 Two of the VIP guests; Sir Kenneth Grange (left), designer of the distinctive HST nose cone (amongst many other things), and David Maidment (right), founder of the Railway Children charity.
[© Geoff Plumb 2017] 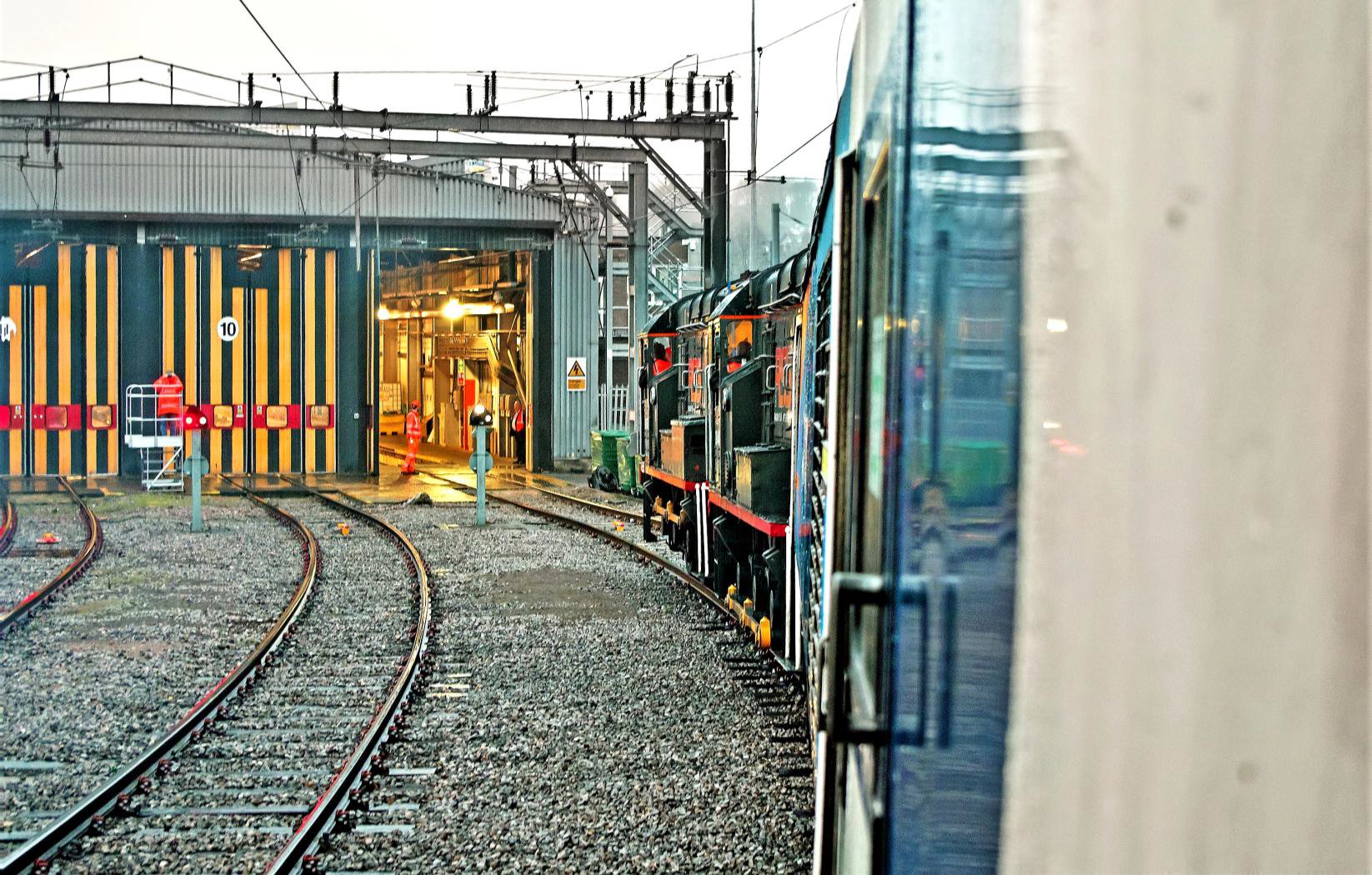 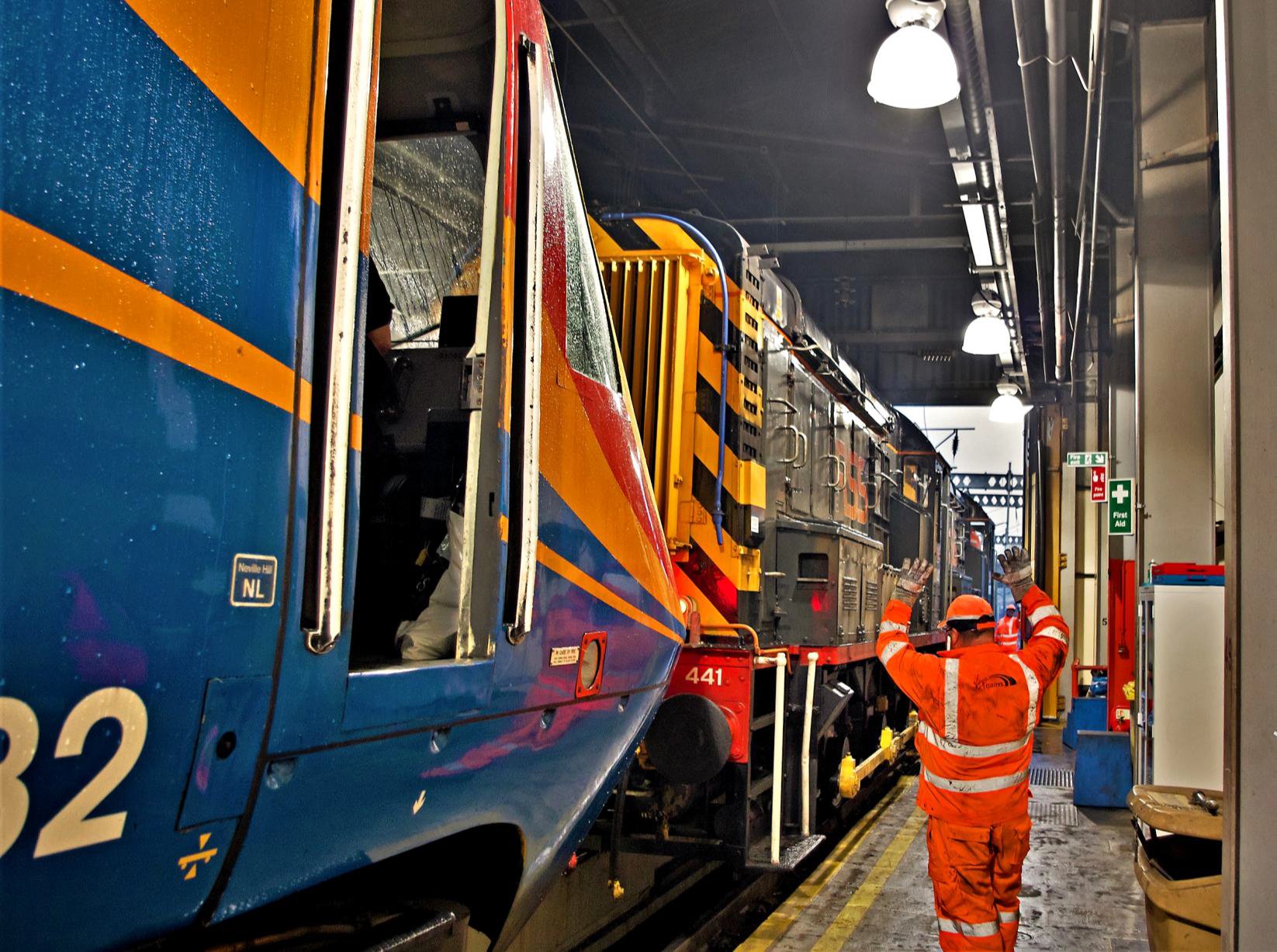 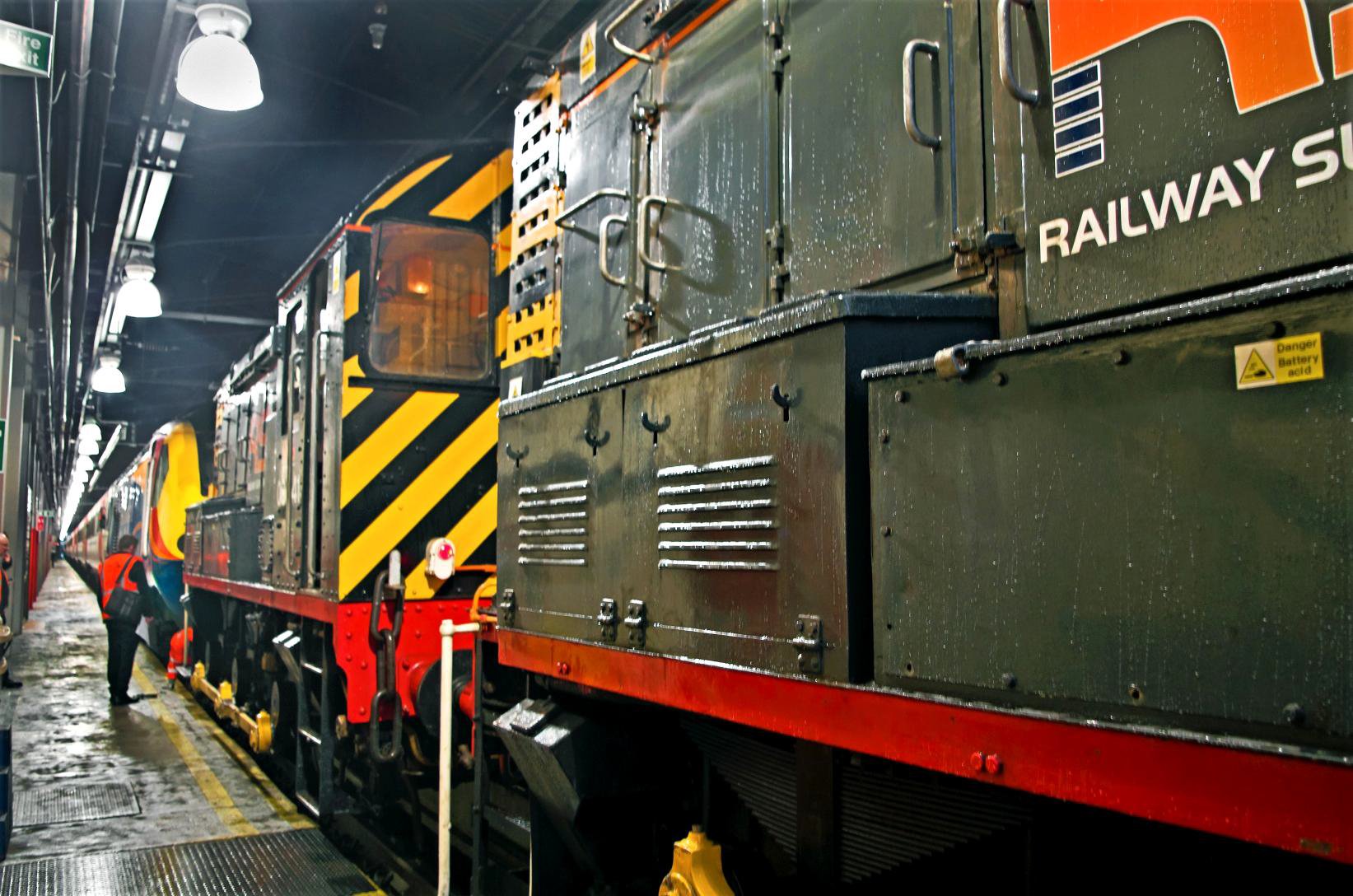 Arrival at Edinburgh Waverley P19 was 2½ minutes late after a journey of some 401 miles. No Civic Reception this time but, as we were winning track, Princes Street was thronged by Scottish Rugby fans returning from Murrayfield after winning against Italy. Many had the Scottish National Flag round their shoulders and/or a facsimile painted on their faces, so that could be said to be a reception.

Back to Waverley from Princes Street, re-boarded the HST for the return to King's Cross; some 399 miles. No booked stop on the drive home. Fast past Birkbeck, my friend from the North had left intermediately to go home. Home arrival was at 23.58 and 20 hours after setting off.

An unusual view from an HST cab! 08472 coupled to rear power car 43082 on No2 Reception/Departure line then hauled the train along the Bypass Line towards the East Depot Line.
[© Geoff Plumb 2017] 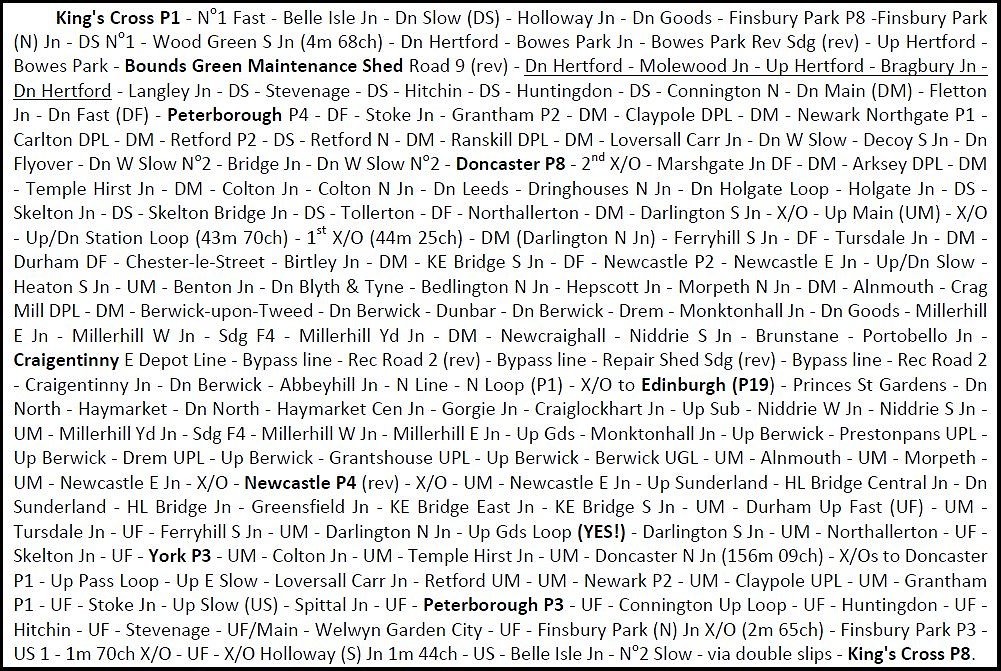 The route in detail.

Hesitation: Two notable examples; the first at York Yard North. Our tour was held to allow 1E64, six mins late, to pass. It was delayed 8 mins at Colton Jn while we crossed to the Down Leeds. The second was approaching Drem; we ran behind 2Y03 from North Berwick to Edinburgh.

Deviation: Comparing the loops listed with the Permit to Travel letter the omission was Berwick-upon-Tweed Down Goods Loop while West Slow No1 at Doncaster Decoy was replaced by West Slow No.2. Darlington Down Main was replaced by the Down Station Loop. Drem DPL was not on the list but was in the timing sheet; it was not covered. More time would have been lost via the loop because of the hesitant running above. However, there were track bonuses over those listed in the letter, the running from Newcastle on the bidirectional Up in the Down direction to Benton Jn outward. Returning to London: UPLs Drem, Claypole & Connington; I stand to be corrected on both hesitation and deviation.
(* goo.gl/vHHtBV for the younger readers.)

Other Things: Thanks to the Railway Performance Society (detailed logs with e-BLN), I now know that GPS data measures 'Vertical Interval' in its output. The interest arose from measuring distances in the past from maps. These were inaccurate as it is not possible to measure height gained/lost on climbs and descents en-route. Outward the tour climbed 5,778ft and descended 5,607ft - gaining 171ft.

Looking at the OS 6" map (1842-52 editions), the King's Cross area spot heights average about 55ft. In Edinburgh, on the 1894 OS 6", the Princes Street end of Waverley Bridge spot height is 215.6ft. A spot height at the junction for the Abbey Hill branch is 104.1ft, the line climbs from there to Waverley. My approximation was a net gain of 50ft from King's Cross. On the return, Edinburgh to Retford (data lost for rest of journey) the train climbed 3,399ft and descended 3,480ft. I have not done Retford spotting.

The Railway Performance Society also kindly provided a speed profile that bore out my general impression of how the train ran, with maxima as expected with an HST 125. I also learnt what gen is provided by the Railcam group. The predictions of what was going to happen next were accurate.

Calendar Day Mileage Record: The Craigy total mileage of 900m 29ch in a calendar day is a record for a one day BLS tour during our 62 years. The tour is also the new UK record holder for a one day charity railtour, raising over £50k; the previous record of £38k was held by our Class 350 EMU 'Clyde Race Tracker' AC EMU tour of 26 Apr 2014. The detailed Craigy route recorded below is thanks to Martyn Brailsford (it was 'bound' to be!)… My LVRC Clyde Coast Pullman train, Euston to Wemyss Bay and back was some 861 miles, those of us who did the Balloch Basher DMU from Motherwell to Paisley Gilmour Street added another 9 miles, to cover 870 in the day (net of the main train mileage not covered).

Mileages, with thanks to Jim Sellens.

For pictures and a report form the 125 Group see goo.gl/wFIhy4.

For a series of 12 pictures of the Class 08s at Bounds Green by Rich Farish see goo.gl/2FNrjC. 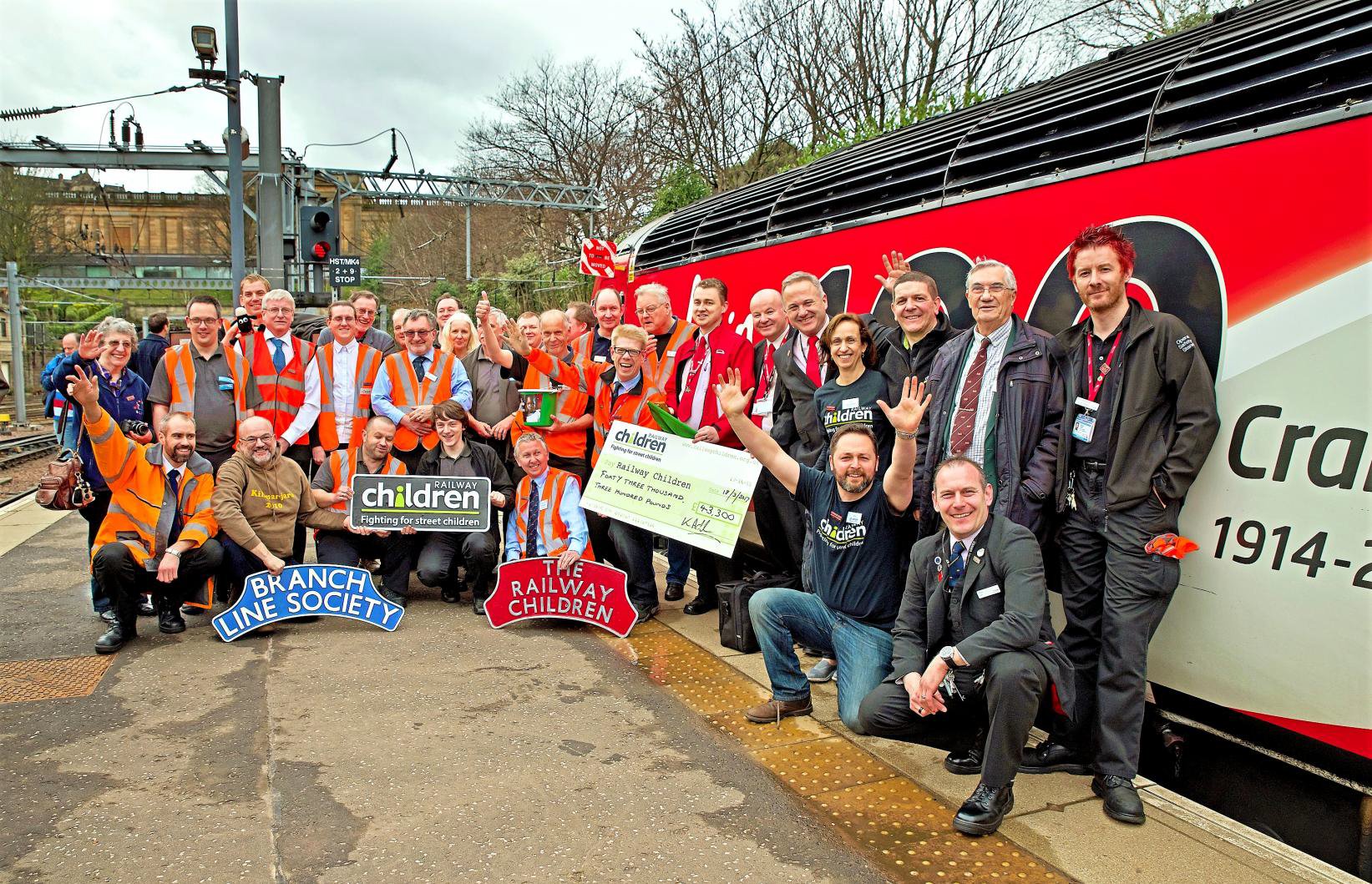 43300 at Edinburgh's Waverley station accompanied by many of those involved in the running of the train. The presentation cheque for £43,300 to the Railway Children charity was not the full amount raised on the day, the final total being over £50,000. An amazing achievement!
[© Geoff Plumb 2017]

From David Horne, Virgin Trains East Coast Managing Director: (dated 24 March) A massive thank you to everyone who helped with last Saturday's charity special train 'Bound for Craigy', operated by us on behalf of the Branch Line Society in support of the Railway Children charity. A stunning £50k was raised for charity - Dave Ellis from Railway Children has sent his thanks, saying: "The commitment, enthusiasm and skill of everyone involved in making this happen in the lead up to the event, was completely mirrored by all of the incredible volunteers involved on board and it was so humbling and inspiring to see in equal measure. When you consider that it costs us £37k to set up a Child Friendly Station in India that helps us keep children from harm and get them to safety before an abuser can get to them, the total amount raised really will literally change thousands of lives."

The special train took several months to plan and arrange, not least because of the special route it took from King's Cross to Edinburgh via both Bounds Green and Craigentinny depots, as well as the Blyth & Tyne line and Millerhill. A big thank you to everyone who gave up their time on the day to make it happen and to those who worked on the preparations before the big day…. A massive thank you to the entire team - you can be really proud of what you have achieved for the children who will now benefit from Railway Children's work.