All photos © Andrew Gardiner 2017, except where stated

It is probably best to start by describing the method of working between the boxes visited. Track Circuit Block (TCB) working applies Tees - Redcar signal boxes and Middlesbrough - Nunthorpe, except the Absolute Block (AB) on the Middlesbrough - Whitehouse Goods Lines. Train Describers are not provided on the sections worked by TCB; trains are described by single stroke bell. In all cases apart from Grangetown and Redcar (which have buttons on the panels) the bells for the TCB operated sections are the bottom sections of BR standard block instruments. Absolute Block also applies between Redcar and Longbeck.

The Longbeck to Crag Hall single line is worked by British Railways (BR) Tokenless Block instruments, originally designed by the Western Region goo.gl/bSS3wf for the rationalization of the Exeter to Salisbury line. The Crag Hall to Boulby Mine single line is worked under No Signalman Key Token (NSKT) regulations but that between Nunthorpe and Whitby is worked under No Signalman Token Remote (NSTR) regulations - it has multiple sections, all supervised from Nunthorpe by telephone.

goo.gl/p6M8iR is an extensive and interesting collection of 101 photos taken during our visit with thanks to our member Andrew Gardiner.

12 members met at the former Sussex St Level Crossing, just west of Middlesbrough station and were joined by our NR host, Tim Johnson. The first visit was to the NER Type C1 ('C' denotes the former NER Central Division) Middlesbrough box dating from 1877 (Middlesbrough West prior to the abolition of the East box in the 1960s). There is a small IFS (Individual Function Switch) panel commissioned in 1978, which also controls Cargo Fleet Rd Level Crossing on the branch, and works to Tees box (located in Tees Yard control tower) to the west and Whitehouse and Nunthorpe boxes to the east. 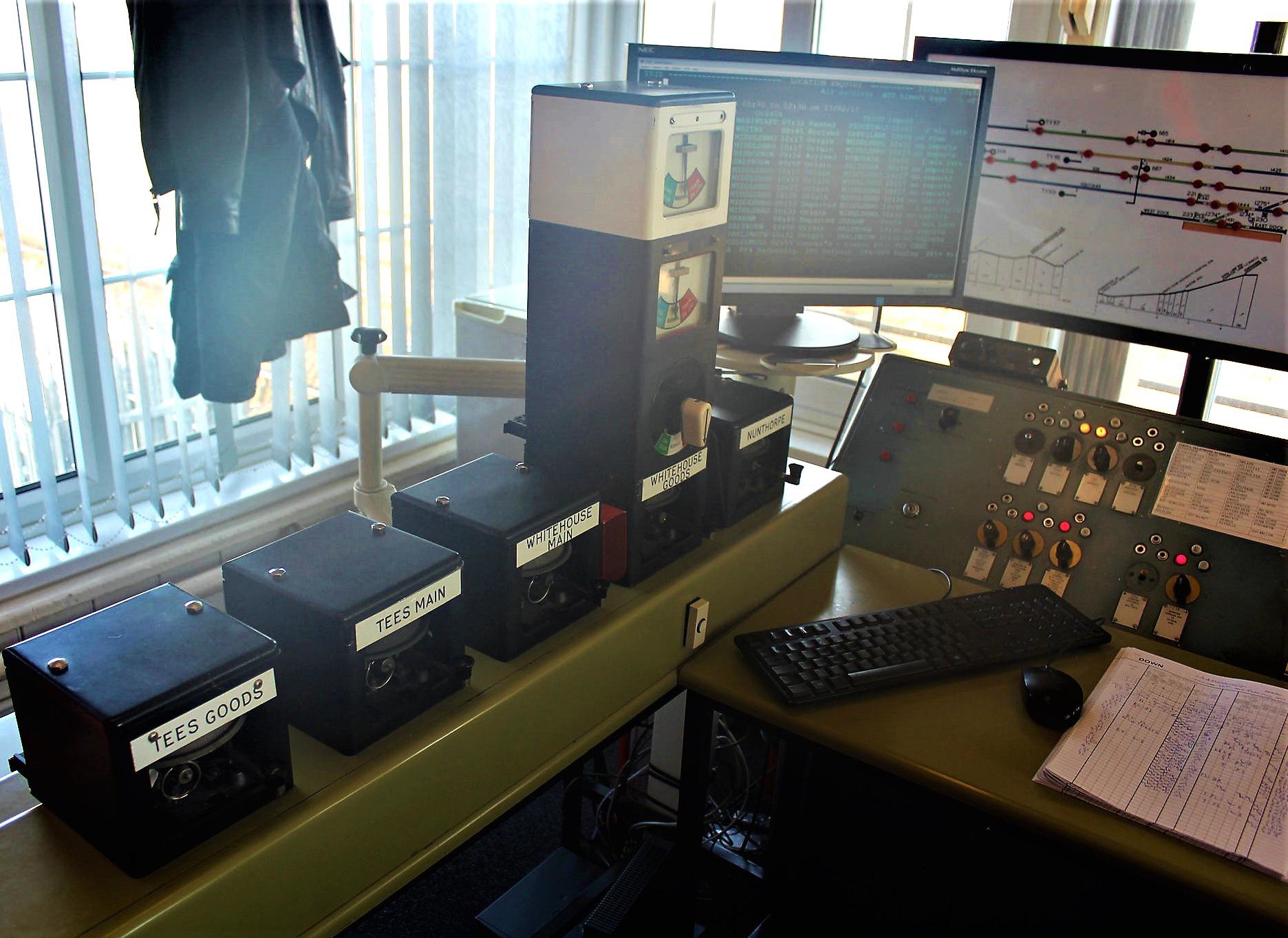 Middlesbrough with the five adjacent block bells, each can ring and has a ring (see below).

There is a Direction Switch used to accept trains on the 'Nunthorpe Single Line'. Five block bells sit side by side to the left of the signaller's workstation - a full block instrument for the goods lines to Whitehouse and the bottom sections of block instruments for the four TCB operated sections. Each has a 'ring' hanging from the tapper, so that the signaller can actually see which ring has rung!

Middlesbrough station has two platforms (there are proposals for a third) and a stabling siding at each end. The Down platform is reversible and the 'Up' can also be used for east departures (not clear on TRACKmaps Oct p47B 2016). There used to be a middle line, for stock stabling, and an east end Down platform 'Whitby' bay.

We then continued east to Whitehouse, an NER 1874 type C1 box, extended in 1900 and subsequently refurbished. It has a McKenzie & Holland type 17 lever frame with 41 levers (27 spare) with tappet locking. The box controls a normally lightly used level crossing which comes alive on match days, as Middlesbrough FC's Riverside Stadium is close by. The Goods Lines end here. The diagram still shows the short Stockton Haulage branch, where the internal system was covered on our Cleveland Area Industrial railtours of 5-7 May 1989 (BLN last reported rail traffic in Jan 1994).

Amazingly, the 'BSC Coke Works' line is still theoretically available for traffic! This heavily rusted and distorted track is the former Down Goods line, left as a single track branch when the line to Grangetown (South Bank Jn) was reduced to double track from 5 Dec 1982, for coal trains to serve South Bank coke ovens (which closed 19 Sep 2015). Track which once diverged south west from the box and was still embedded in the road was the subject of some speculation amongst the participants. Subsequent research, after the visits, showed that it formed a short branch from the former Cargo Fleet Sidings to the Redpath Dorman Long engineering works. 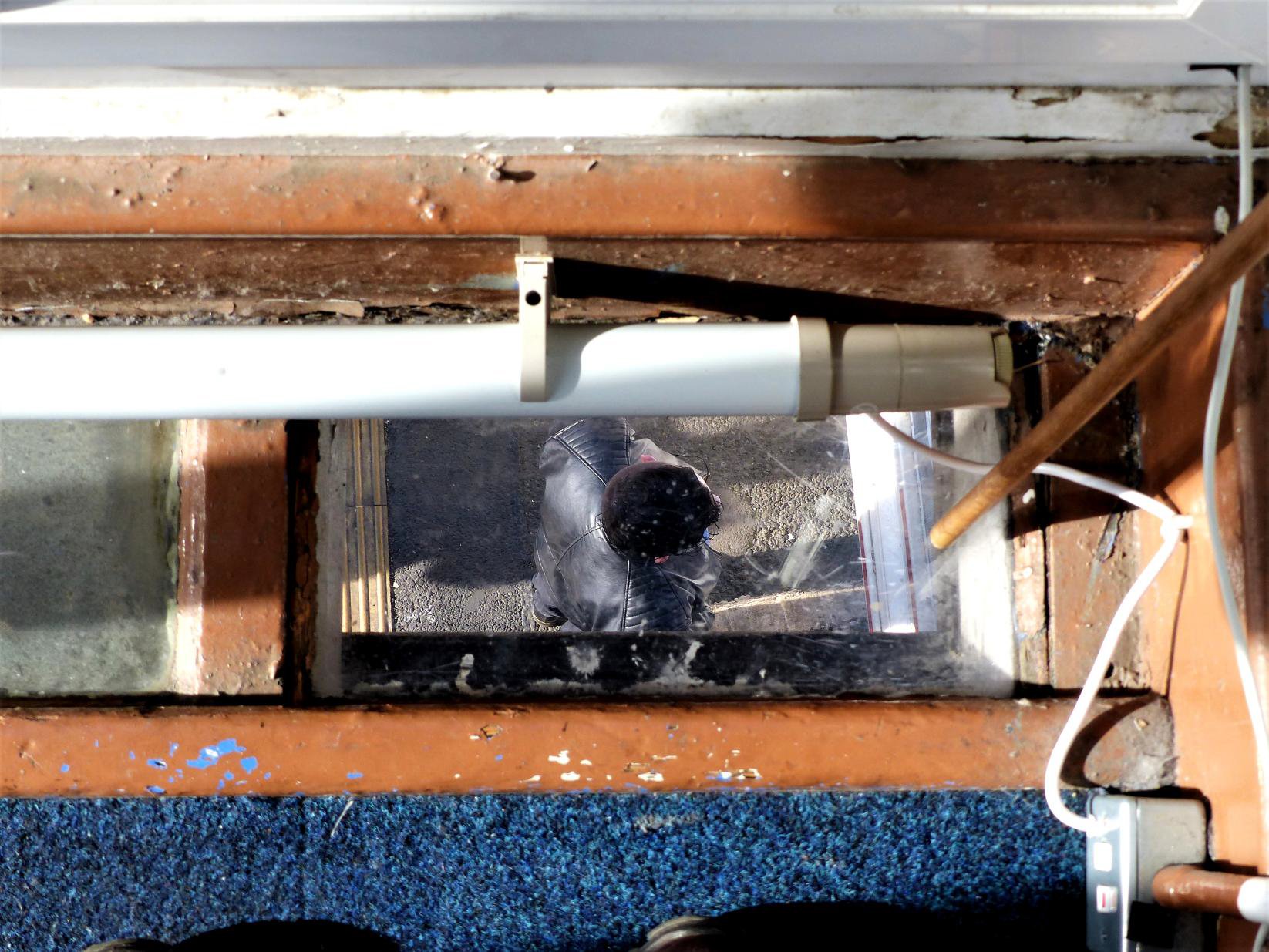 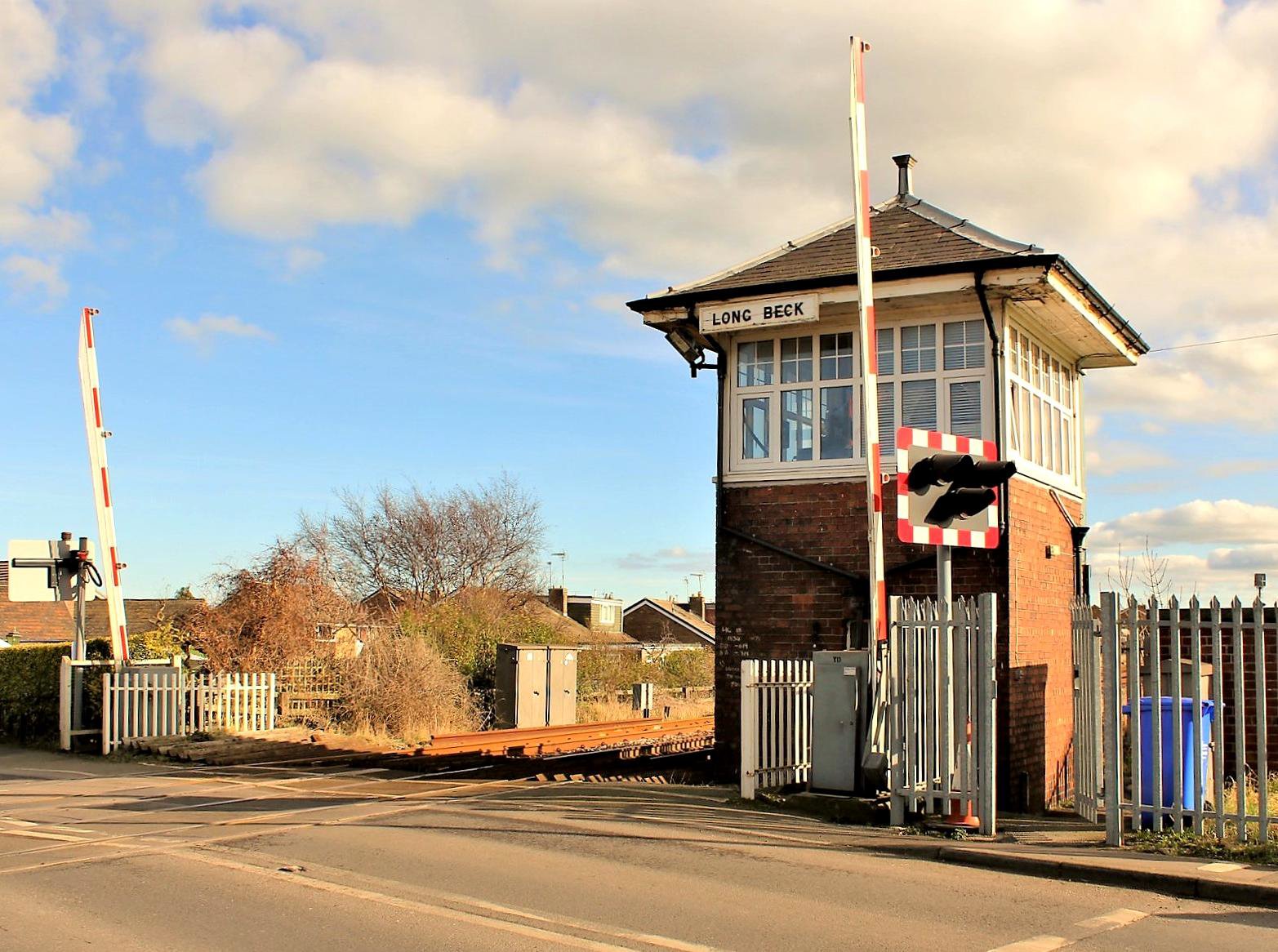 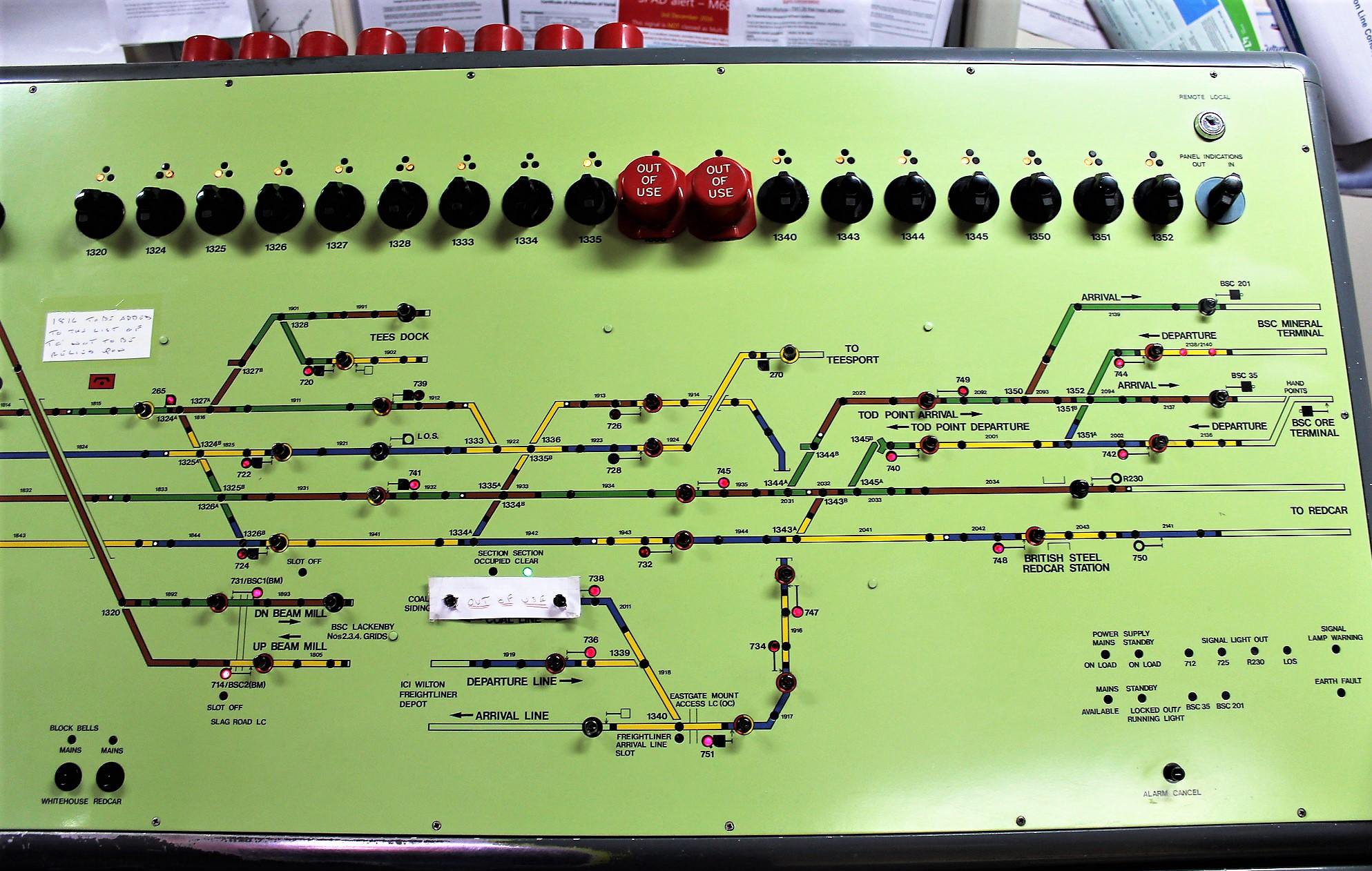 Part of the Grangetown panel with the Wilton branch bottom centre.

Nunthorpe was our last visit, now the only box on the Whitby line. The signaller controls the entire branch and has a 'mimic diagram' to 'track' the trains manually; magnets can be placed on the sections to identify their locations. Drivers are given permission by telephone to withdraw key tokens (Tyers No9) from the instruments at Battersby, Glaisdale and Whitby and the intermediate instrument at Grosmont (for movements on and off the North Yorkshire Moors Railway). The points at Battersby, where trains reverse, are not controlled but work automatically for arriving trains on a first come, first served basis. Battersby has the only signals on the branch which, together with the points, work for departures by the withdrawal of the appropriate token. They can also be operated by a route set plunger, which must be used if either a train is delayed in leaving the station and the points indicator has reverted to 'not set' (red) or a movement is required without a token being withdrawn.

At Nunthorpe; the points at the Middlesbrough end are train operated, with a point indicator where a Down home signal would normally be. The layout is designed to allow trains to turn back in the Down platform without shunting between platforms unless there are consecutive Down trains, in which case the first arrival shunts to the Up platform via the Battersby end of the station. The level crossing barriers are (unusually these days) controlled by a gate wheel with the road warning lights controlled separately by buttons on the block shelf. The box is a 1903 NER type C2b. Due to the unusual hipped roof it is Grade II listed so cannot be demolished without the agreement of English Heritage. It has a McKenzie & Holland type 16 frame with tappet interlocking. In 1966 the box was reduced to 16 levers with 6 spare, a direction lever for acceptance of trains from Middlesbrough, a gate release lever and 2 wicket releases. This was almost certainly with the abolition of Nunthorpe East with singling of the line. Here the current Whitby and the then closed Guisborough (CA 31 Dec 1964) lines diverged. The line between Guisborough Jn (Middlesbrough) and Nunthorpe was singled from 26 Jan 1986. 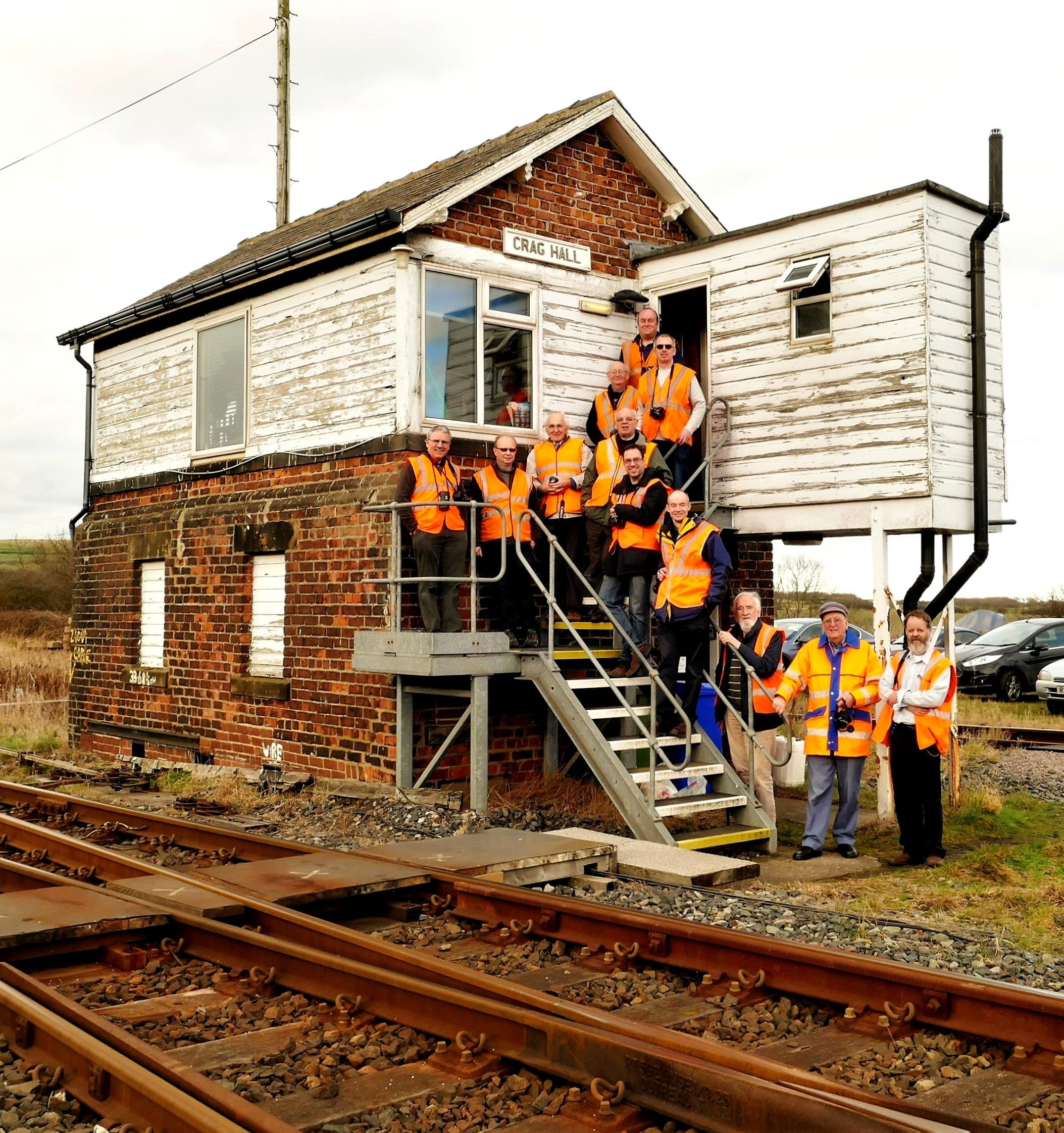 Group photo at Crag Hall (no trains signalled) taken by the Mobile Operations Manger from the single line token 'pulpit' - he was preaching to the converted here. (Roger Carpenter). Second down from the top of the stairs is Nick Jones who organised the visits. Third down is our BLN North East Regional editor Geoff Blyth, furthest left is 'Branch Line' Email message operator Nick Garnham.

Our grateful thanks for this very interesting day are due to Nick Jones for making the arrangements and to Tim and his boss Andrew Thexton for making the visits possible. Thanks also to our members Nick Jones, Andrew Gardiner and John Cowburn for their help in compiling this report.