This historic 2ft gauge railway transported slate about six miles from Bethesda to Port Penrhyn at Bangor and CA Jul 1962. Much can still be walked. Today the heritage PQR aims to reopen sections. After the Blackpool trip (above), some had stayed the night intermediately for our 11.00 visit. A helpful sign on the A5 pointed the way to the railway in the hamlet of Coed Y Parc. Parking is limited so members were directed to a slightly soggy field. The walk then to the railway was interesting by mountains of slate waste to join the track bed. 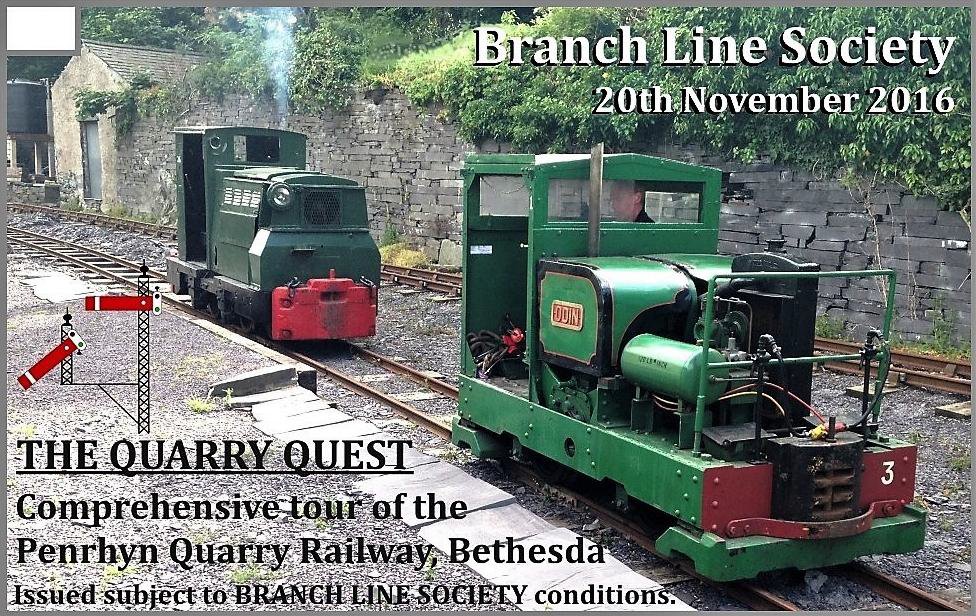 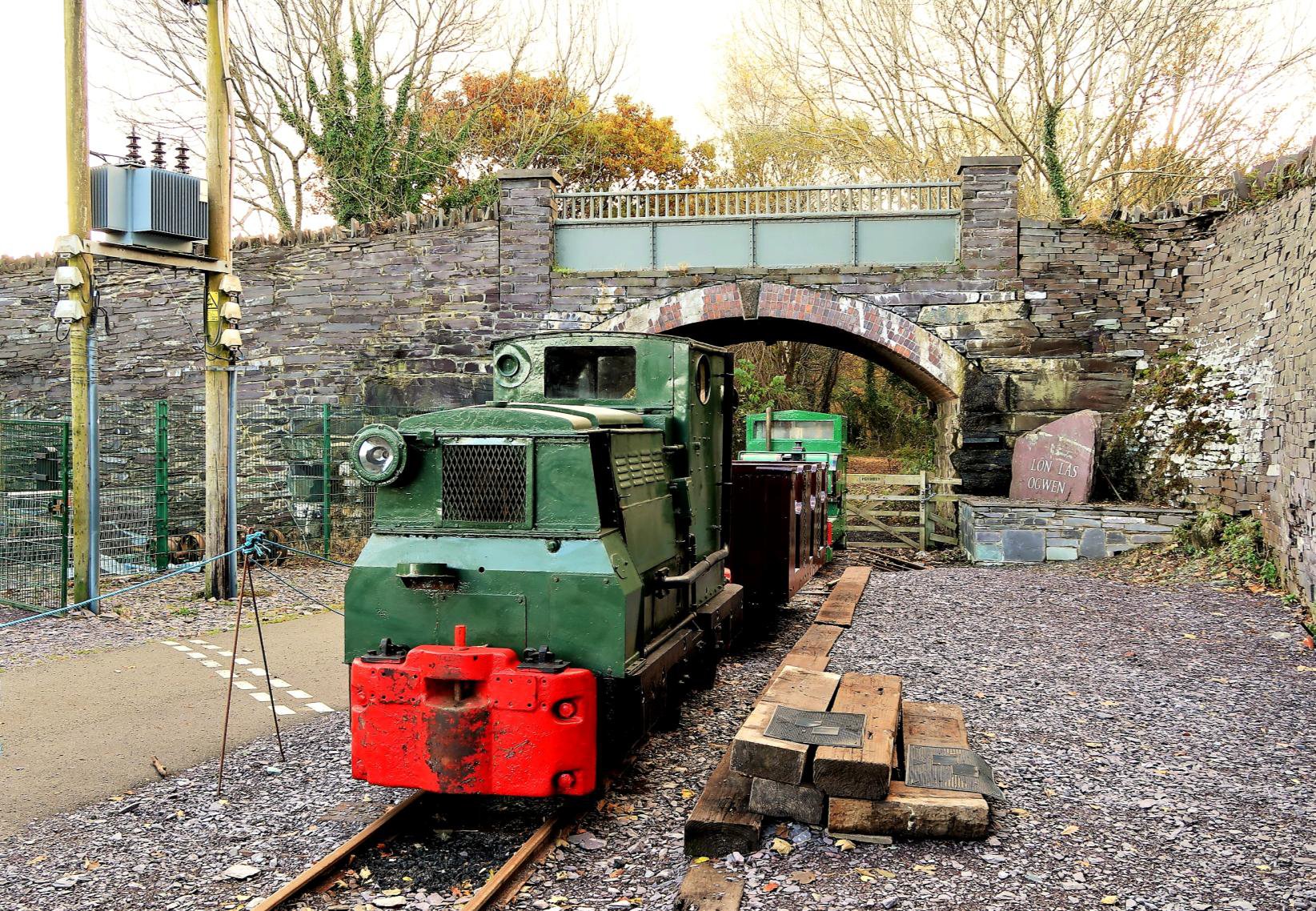 Penrhyn Quarry Railway the extension platform at Felin Fawr. The railway once continued under the bridge as it may do so again.
[Ian Mortimer]

Hot drinks and biscuits were gratefully received. Loco 26 (RH 221625/1943) and coach 'R' waited at the inland end; beyond sat 'Odin' (MR 5859/ 1934). The two worked our train between them, Odin with a lengthy coupling bar, following at first. Despite the dramatic wet weather in the days leading up to the event, and 'Storm Angus' elsewhere, on the day, it was a lovely sunny late autumn morning with a crystal clear blue sky. The Snowdonia peaks were highlighted by snow. The good weather was just as well as coach 'R' had no roof! It was also rather cosy with three bays of seats and all 21 participants shoehorned on to one trip, some sideways to fit! Fortunately, leg stretches, or rather leg untangles, were frequent. 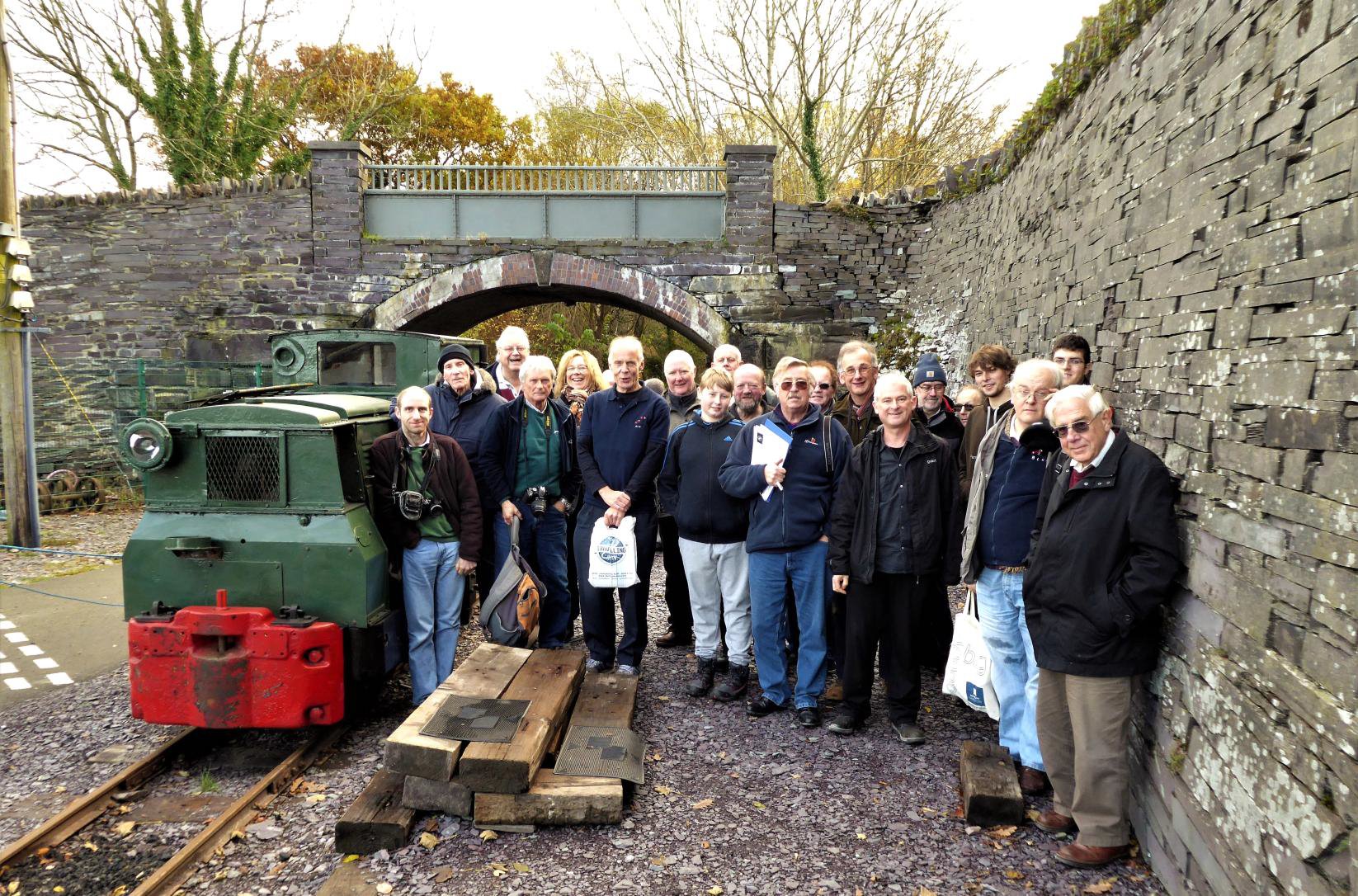 Penrhyn Quarry Railway, Felin Fawr platform on the recent extension (OP 17 Sep 2016),
as with most of the lines here it was traversed with the riding vehicle at the extremity.
[Alan Sheppard]

Departing 11.17 from the small recently constructed Felin Fawr platform on the extension (OP 17 Sep), 'The Quarry Quest' tour headed through the station loop alongside the previous much longer single platform. A 7¼" line once ran on the platform https://goo.gl/Fn3Uhw but has sadly now gone. 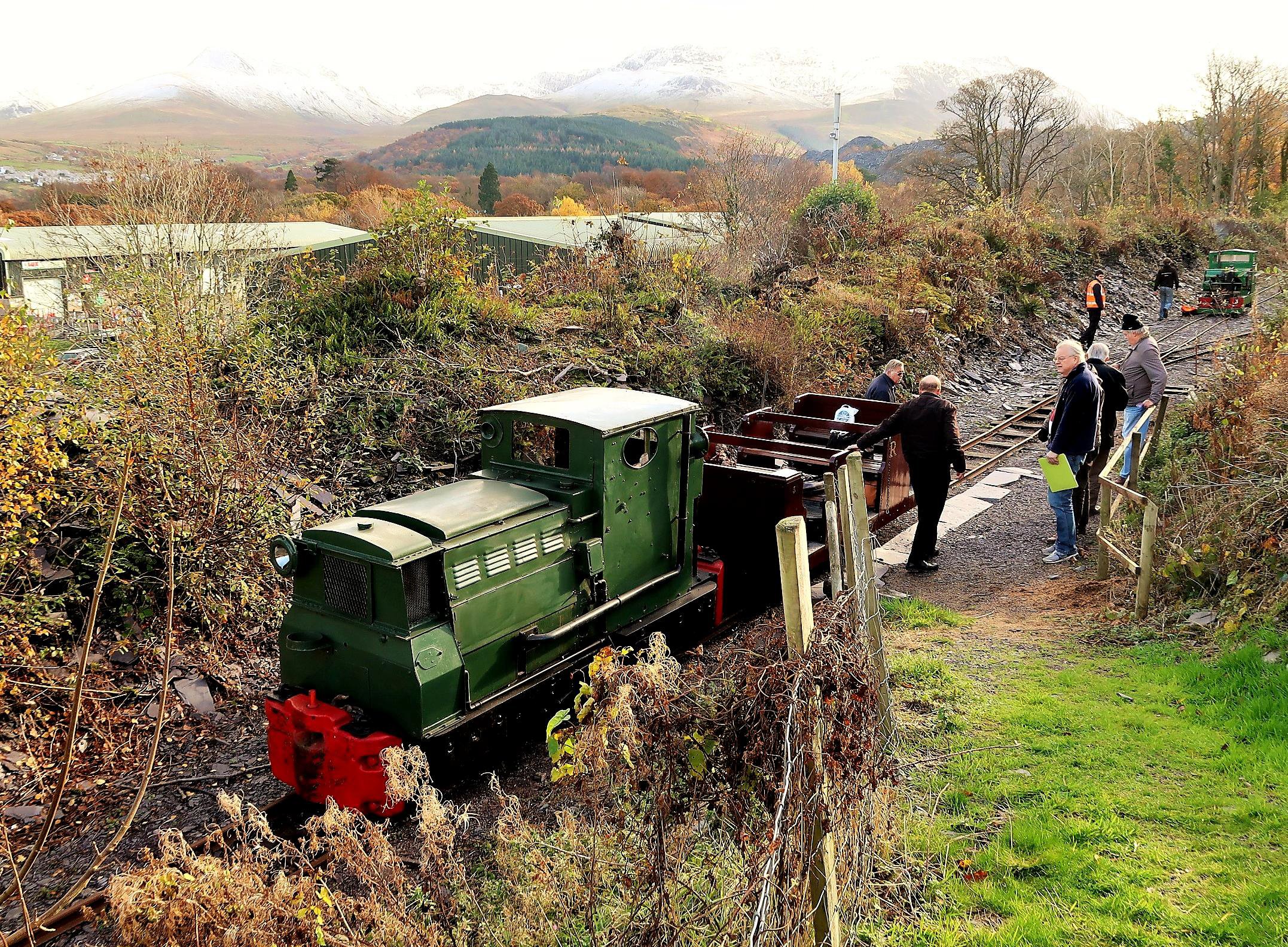 Attractive views in Wales - the countryside and mountains (with snow) are not bad either! St Ann's Hill (Halt) platform at the north end of the Heritage PQR.
The Loco Release Line is top right next to the light engine. 21 'average' (?) BLS members managed to fit into this coach.
[Ian Mortimer]

After a quarter of a mile on the original PQR main line, St Ann's Hill (Halt) platform was reached. None of the platforms have a name board. John Cameron's request to go to the end of line was readily agreed to by the friendly and helpful volunteers (notable for being remarkably young!). A missing bridge over a minor road (see OS map: e-BLN 1270.3022) limits current operations but the enthusiastic railway has plans to extend both ways, probably south first towards the massive Penrhyn Quarry itself. 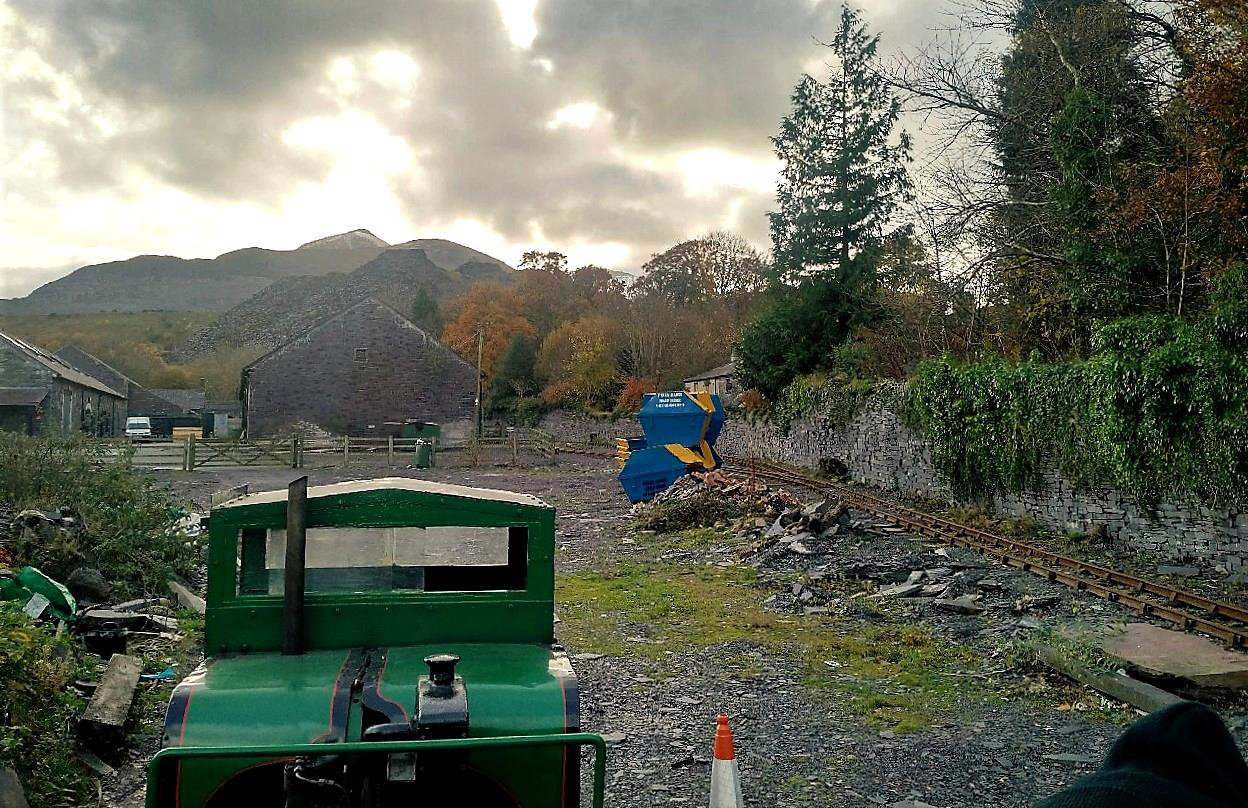 The extremity of the 'loading line' looking south towards the Quarry and normally full of wagons. Right is the PQR main line, the points right of centre are for the loop.
[John Cameron]

Next was the end of the loco release line here, known as Quarry Siding, then back inland to veer left to the lengthy loading line, a significant distance away from the running line. On the way past the first time it had been full of wagons but was now pleasingly empty as our train reached the very end. Return south was on the original main line avoiding the former station, then left in to the twin track Felin Fawr Works, an original building where most stock is kept. Line 1, the much longer one, was taken which actually runs through the building and for quite a way beyond outside (next time!). About half the lengthy building was covered to where a nice little tank engine 'Jubilee' (MW1382/1897) was undergoing restoration. It originally worked at Penrhyn Quarry and had returned after some 50 years away, just the week before our visit. Access to the other shed line was via basic 'push across' points so not covered on the train. Beyond the shed were the workshops of 'PQR Engineering', an affiliated company which the railway is developing to undertake commercial work. Not just railways but bespoke gates have been constructed and many new passenger coaches. Good luck with all this. 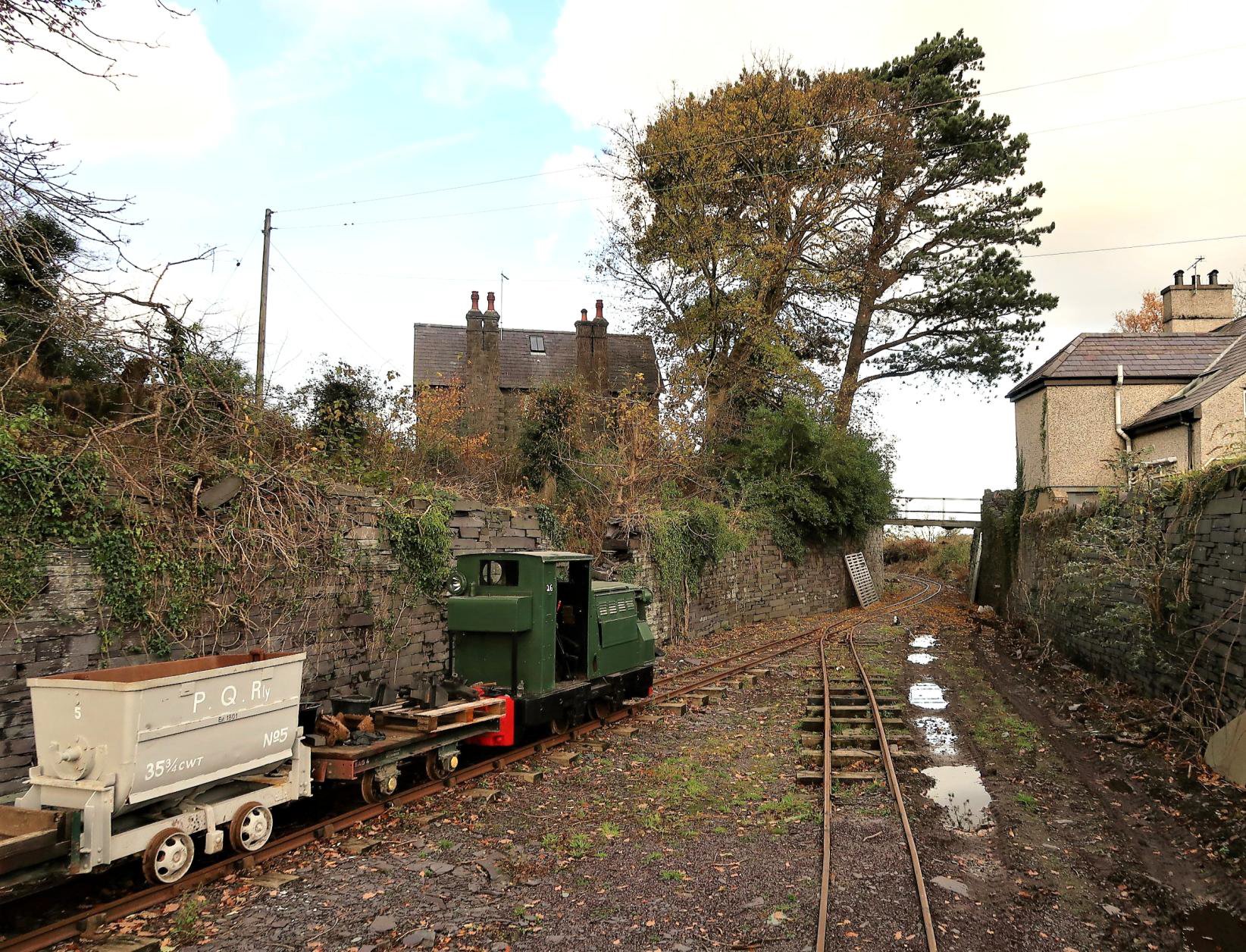 View north (towards St Anns Hill/Bangor) on leaving the line; the displaced stock normally stabled on this 'loading line' is temporarily on the running line left.
[Ian Mortimer]

Finally, the tour reached the south extremity. For its 17/18 Sep weekend open day the railway had temporarily been extended beyond the overbridge there, then the rails removed although the sleepers still remained. A very convenient truck allowed griceage of the other depot line with people power (and permission of course!). Thus ended an excellent two hour visit to this friendly railway which now welcomes visitors with regular running days and special events. Thanks to our hosts and also to John Cameron who organised the event for the Society. 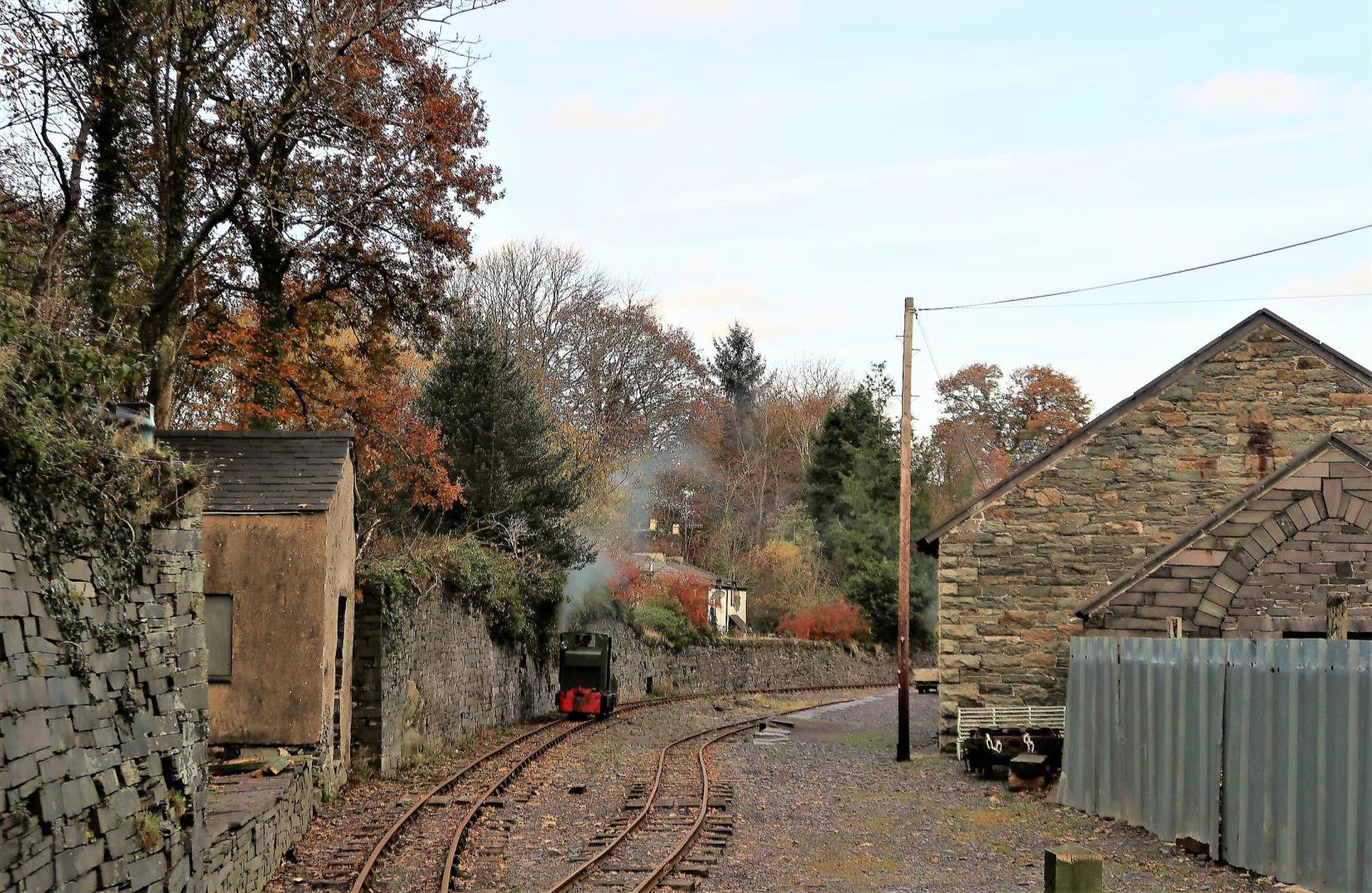 Looking north, the light engine is on the PQR main line, right is the platform that was used prior until 17 Sep
on the platform loop and previously had a miniature railway along it.
[Ian Mortimer] 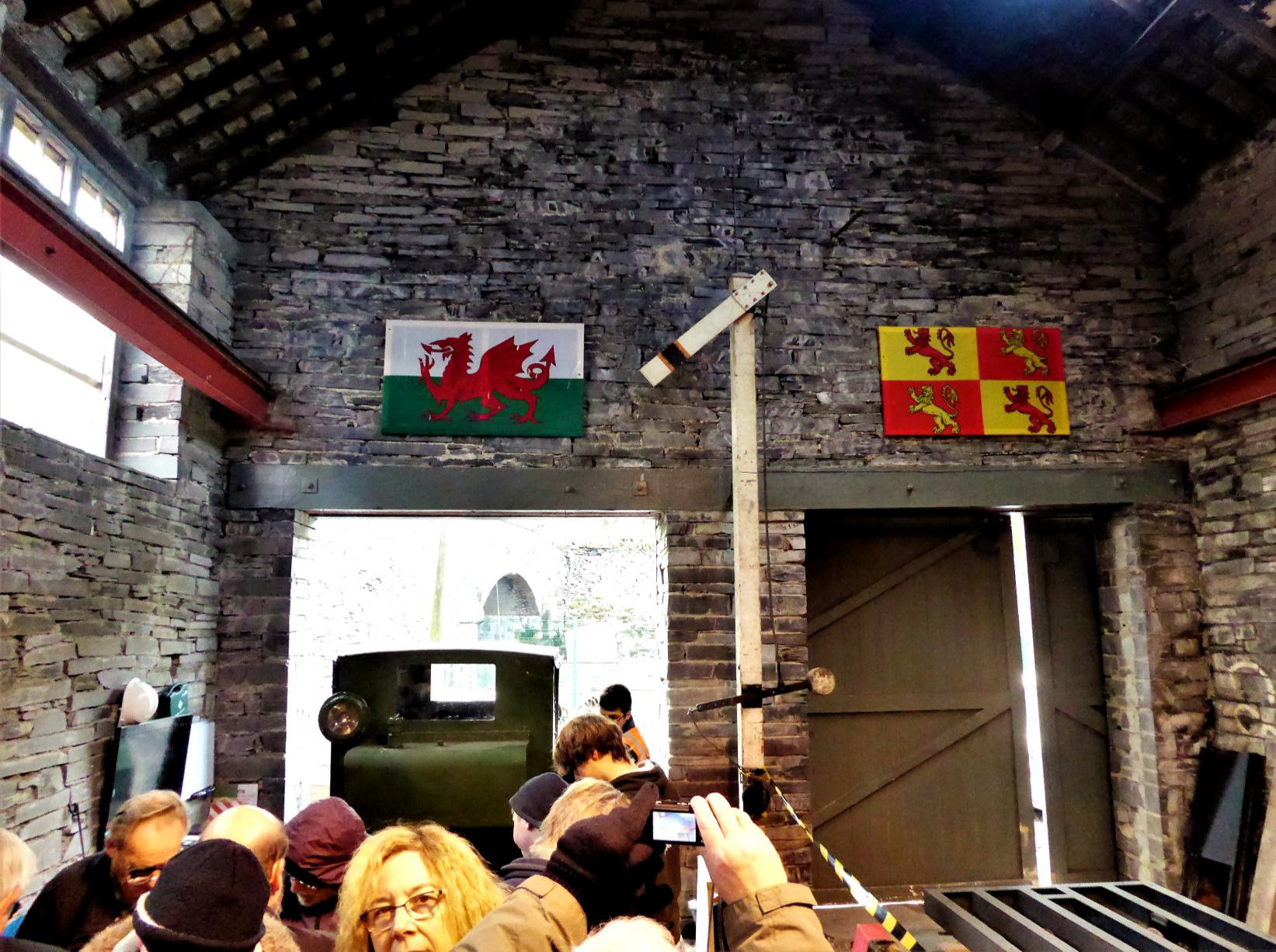 Our tour inside the shed/workshop (Road 1) - an original building. Isn't it funny the way you always have someone looking the other way to everyone else…
Road 2 on the right includes a full sized pit.
[Alan Sheppard]

The large workshop had quite a few brand new coaches in various stages of construction. There was also a buffet car from the South Tynedale Railway at Alston. PQR is clearly a railway with ambition, enthusiasm and energy. http://www.penrhynrail.co.uk/ is the new website and https://goo.gl/BVJS3e has some historical pictures and information. 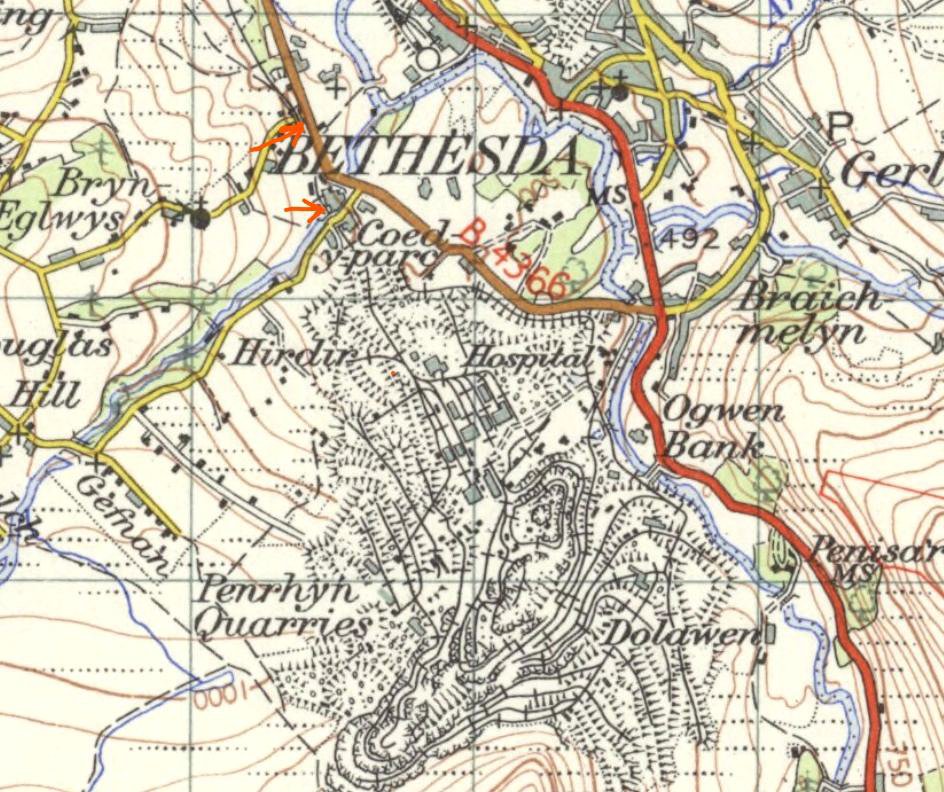 OS 7th Series 1" map 1948-59 showing the former extensive Penryhn slate quarry narrow gauge network. The present limits of operation of the 'demonstration' heritage railway are between the two orange arrows on the former main line to Port Penrhyn (which is just east of Bangor). The former standard gauge Bethesda station, the terminus of a five mile branch from Bangor, is top centre (CP 3 Dec 1951; CA 20 Oct 1963). The main road shown is the A5.
See https://goo.gl/3ZI4vO for some history of the railway.

In the lovely sunshine and superb scenery, three members took a 7-mile walk exploring the trackbed around the outside of the gigantic Penrhyn Quarry (still partly in production). The heritage railway is aiming for the former level crossing (SH 6243 6570), a perfect terminus being close to the major tourist attraction of 'Zip World '. This is not the national collection of men's trousers but a one-mile (in two sections) long zip wire ride over the deep, vividly coloured flooded section of the 'missing mountain' with fantastic views (£60 a go). Judging by the noise from the zippers it is quite an experience; claimed to be the longest in Europe and the fastest in the World! The quarry can be appreciated from the visitor centre viewing point (free with facilities). Guided off-road vehicle tours to the highest point (distant views if clear) are available for £10, but BLN brings you, free of charge https://goo.gl/a9l4lZ !