Blackpool in late November, what was the appeal? Not the Illuminations, they had finished on the 6th, and it certainly wasn't for sunbathing on the beach. Perhaps to watch the popular BBC celebrity ballroom dancing show, taking place in the Tower this weekend? No, it was 'Strictly' to take part in the BLS mega-tour of the Blackpool Tramway. DMU 150143 was boarded at Preston along with quite a few other BLS regulars for the short journey to Blackpool North. Something fishy was going on. On arrival, I considered taking a few pictures, but they do things differently here and wanted everyone to exit so the doors at the platform ends could be closed and that was that. There was plenty of time for a walk to the Promenade with rolling waves breaking on the beach, a strong bitterly cold wind and rain along the Fylde coast. A group had started to assemble at Rigby Road depot gates when I arrived; eagerly anticipating what was to come.

We could have done without the shower of rain and hail, but to our rescue and appropriately named 'Fisherman's Friend Fleetwood' (this was not coincidental!) tram 737 sailed out from the depot, stopping near the entrance. The driver opened the doors and it was 'all aboard'; we even had our Rod with us (from Carlisle). 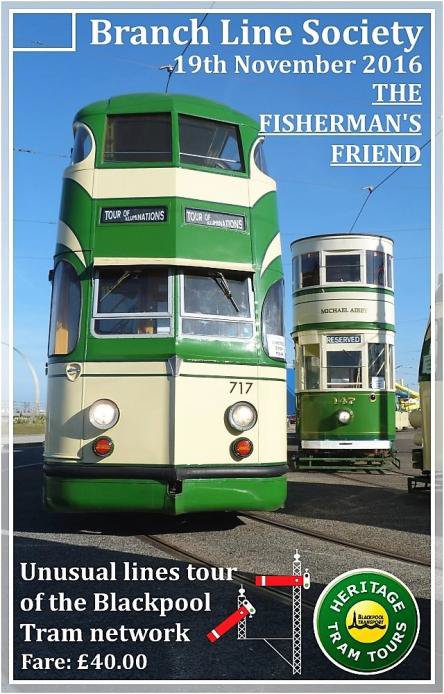 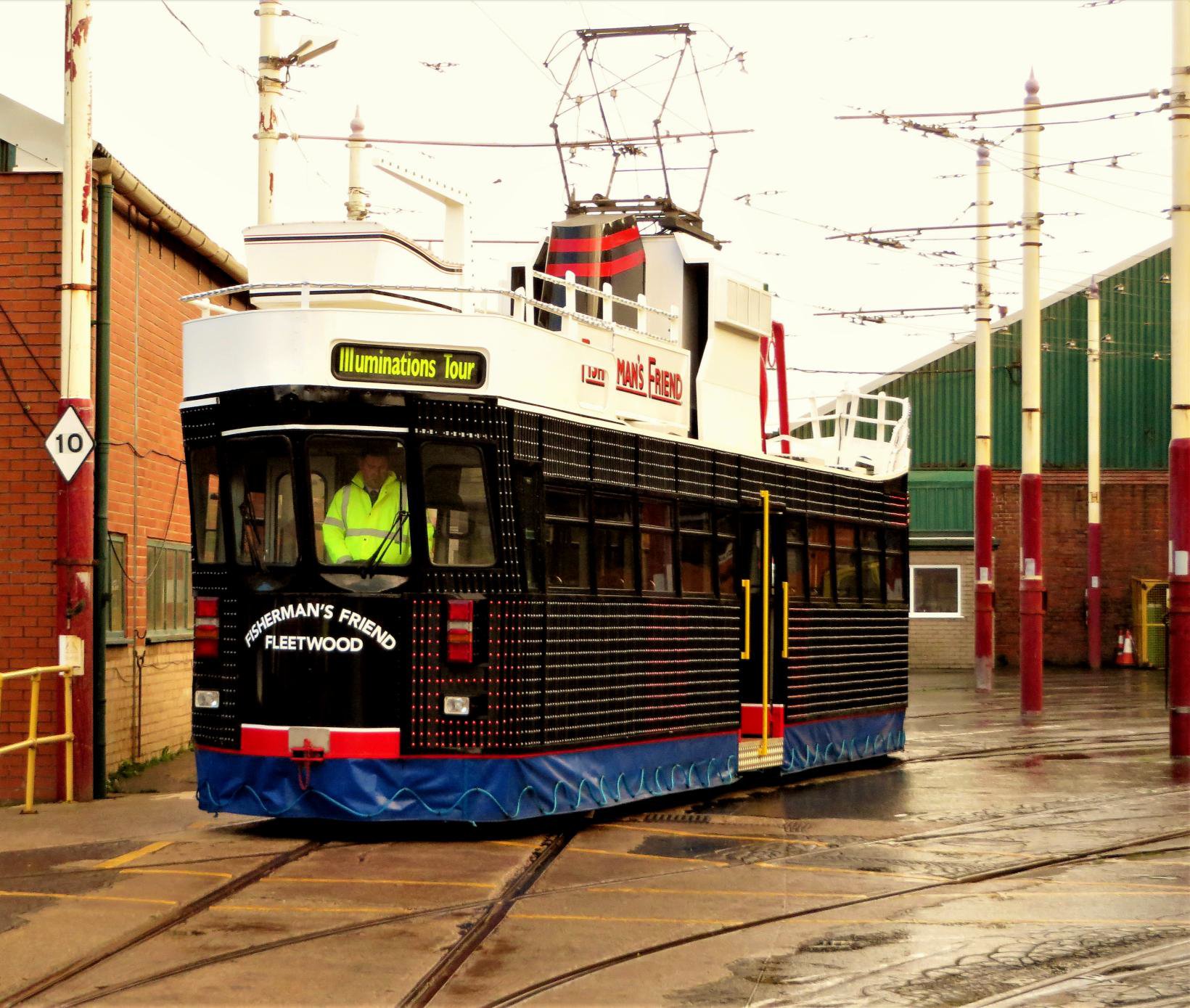 The illuminations had finished but it was certainly the start of a very illuminating tour as Tram 737 appeared out of Rigby Road Depot Road 7 to pick up participants.
[Rob Moorcroft]

Once loaded it was off to 'catch' No7 Pit Road into the depot, reaching half way and stopping just short of the stabled trams, no buffer kissing with these vehicles. Then a reversal out to the depot gates and disembark to allow the rest of the party to repeat the manoeuvre.


After 'Starr boarding' and doing the line (not used in service) from the head shunt to the departures platform, the tour headed north past the various frontages of guest houses and hotels, some a bit of a wreck and in need of more than just a coat of paint. The ever resourceful Kev then produced 90 gift tins of Fisherman's Friend lozenges, which he had coughed up for one to each participant (how sweet).

Heading past the Pleasure Beach I glanced upward at 'The Big One' rollercoaster and reflected on riding it as being a different form of (extreme) track bashing! We traversed the middle roads at North Pier and Bispham en route to Cleveleys, where a reversal scored the crossover on the way to Cabin. Paul and Tim were mobilised on raffle ticket duty and squeezed their way through the tram taking money off the captive audience, 100% of the 'Pieces of Eight' (£310 actually) went to Heritage tram operations. Cabin crossover was used to reverse before turning on Little Bispham loop to reach Bispham. The north end connection to the middle road was OOU; we ran past and reversed in via the south end link. Our tram anchored and with passengers aboard, surprised the Flexity drivers passing either side. In the break, many naturally bought fish and chips to keep them on an even keel.

Participants fed and watered, the tour resumed with Thornton Gate Middle Road and around the Fleetwood Outer Loop, passing by the 'North Euston Hotel' to pause at Fisherman's Walk (close to the Lofthouse factory where the FF lozenges are made). Reversal via the crossover and taking Fleetwood inner loop, the Knott End ferry boat 'Wyre Rose' (sounds painful) was in. Fleetwood's first terminal station was on the Port side here from 1840 to 1851. Incredibly between 1841 and 1848, the fastest route from London to Glasgow was, surprisingly, by train to Fleetwood, packet boat to Ardrossan then train. A stay in the North Euston Hotel often featured.

In 2016, back at Thornton Gate a reversal scored the middle road connection, where it was assumed we would stop and reverse, but no, it was off northbound to cover Fisherman's Walk crossover in the other direction! Heading south through North Pier, two rapid reversals 'tackled' the south and north end crossovers. By now well ahead of time, it just remained to head back to the depot over the 'inward' street running line. 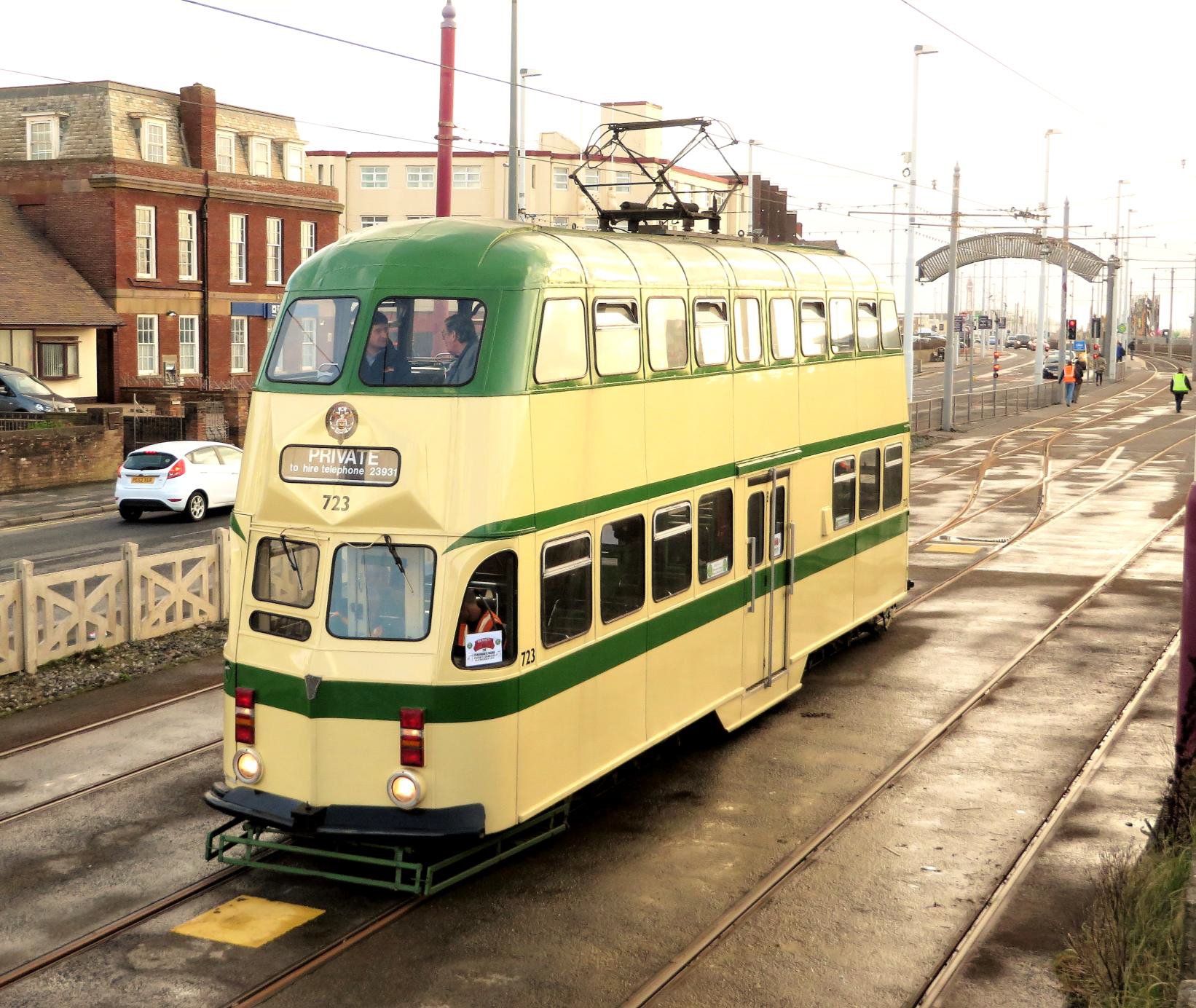 As we approached, stopped and expected to get off 'please remain seated' was the instruction from the stewards and the tram turned sharp left along side the fitting shop to stop at the far end of the building where the wires ended. A fitting end to the superb 42.1 nautical mile tour (an average of 7 knots) of the Blackpool Tramway system - an impressive haul of all available rare track and you should have seen the one that got away! We could easily become hooked on swell trips like this. 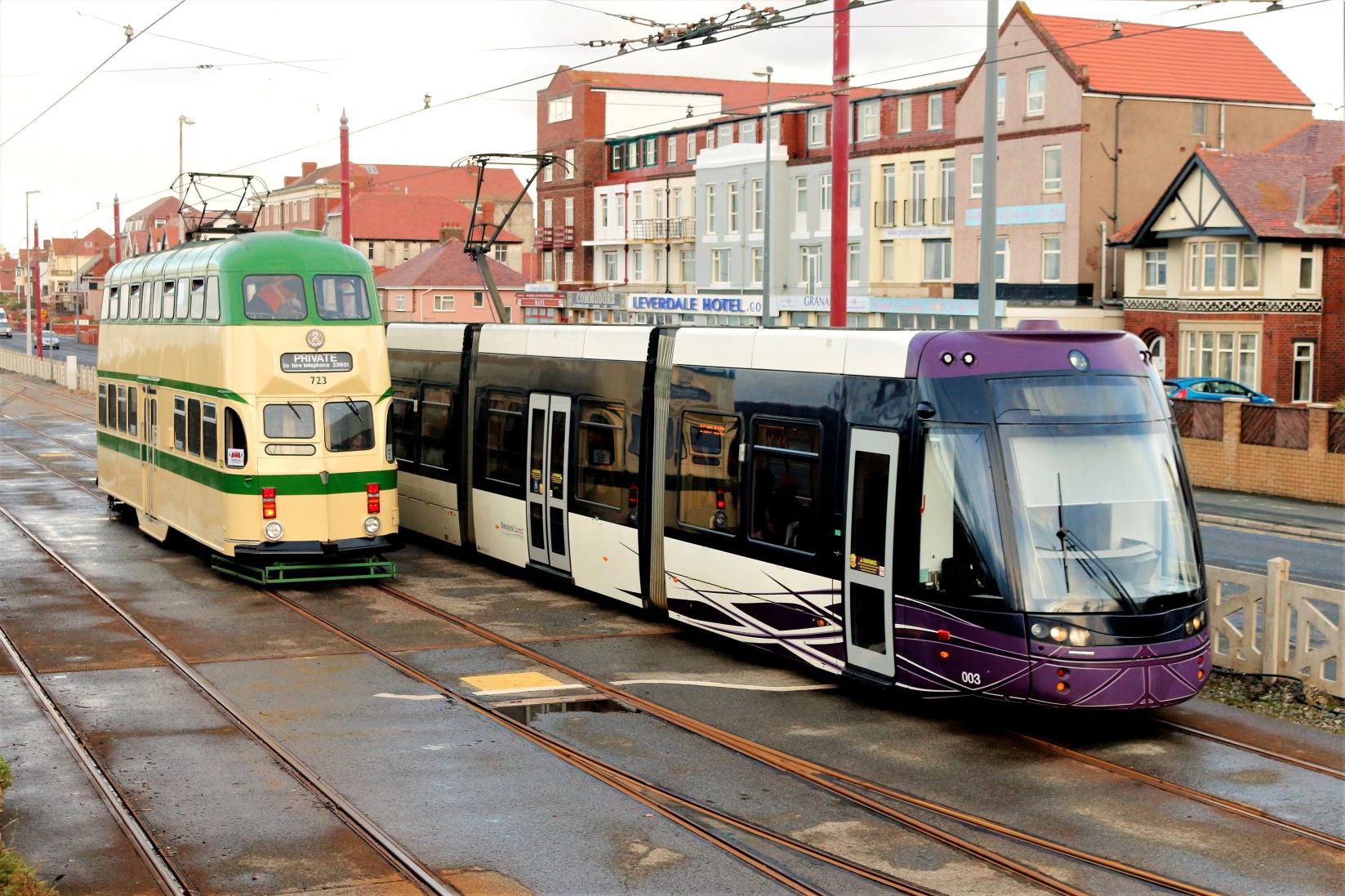 Old and new at Bispham with the OOU connection from the north to the centre road visible behind the trams.
[Stuart Hicks]

Click here for a 'chart' of the moves and distances is available as a download with e-BLN thanks to Jim Sellens. Many thanks to all concerned, particularly Bryan Lindop head of Blackpool Heritage Trams and his colleague, Gary Conn for his Kev-like enthusiasm and organisational skills. They were delighted and very grateful for all the promotional work, sales and fund raising achieved by the Society for them on this trip which will mostly 'sponsor' the new LED lights on trawler 737. Thanks also to our anchorman, Kev Adlam. 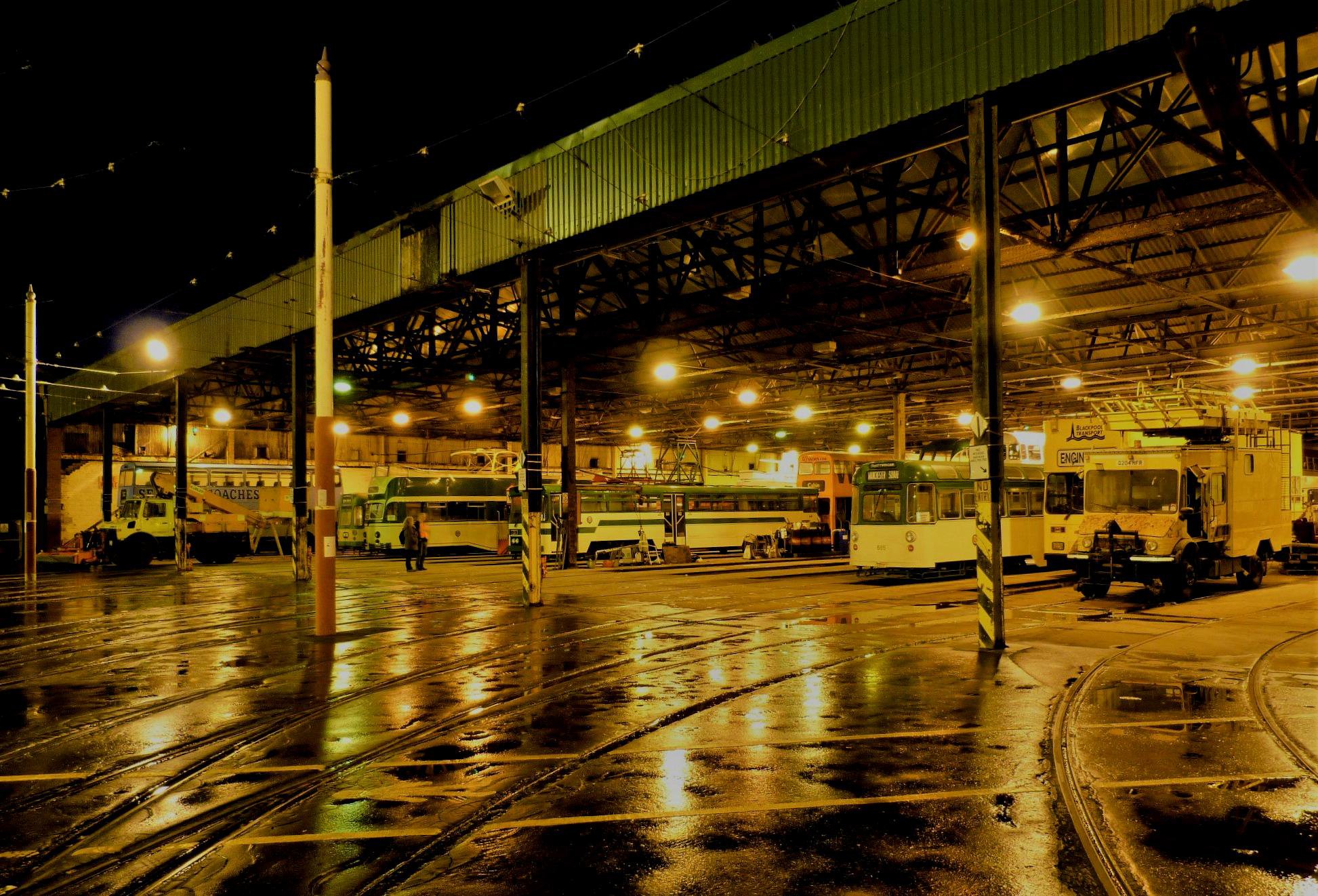 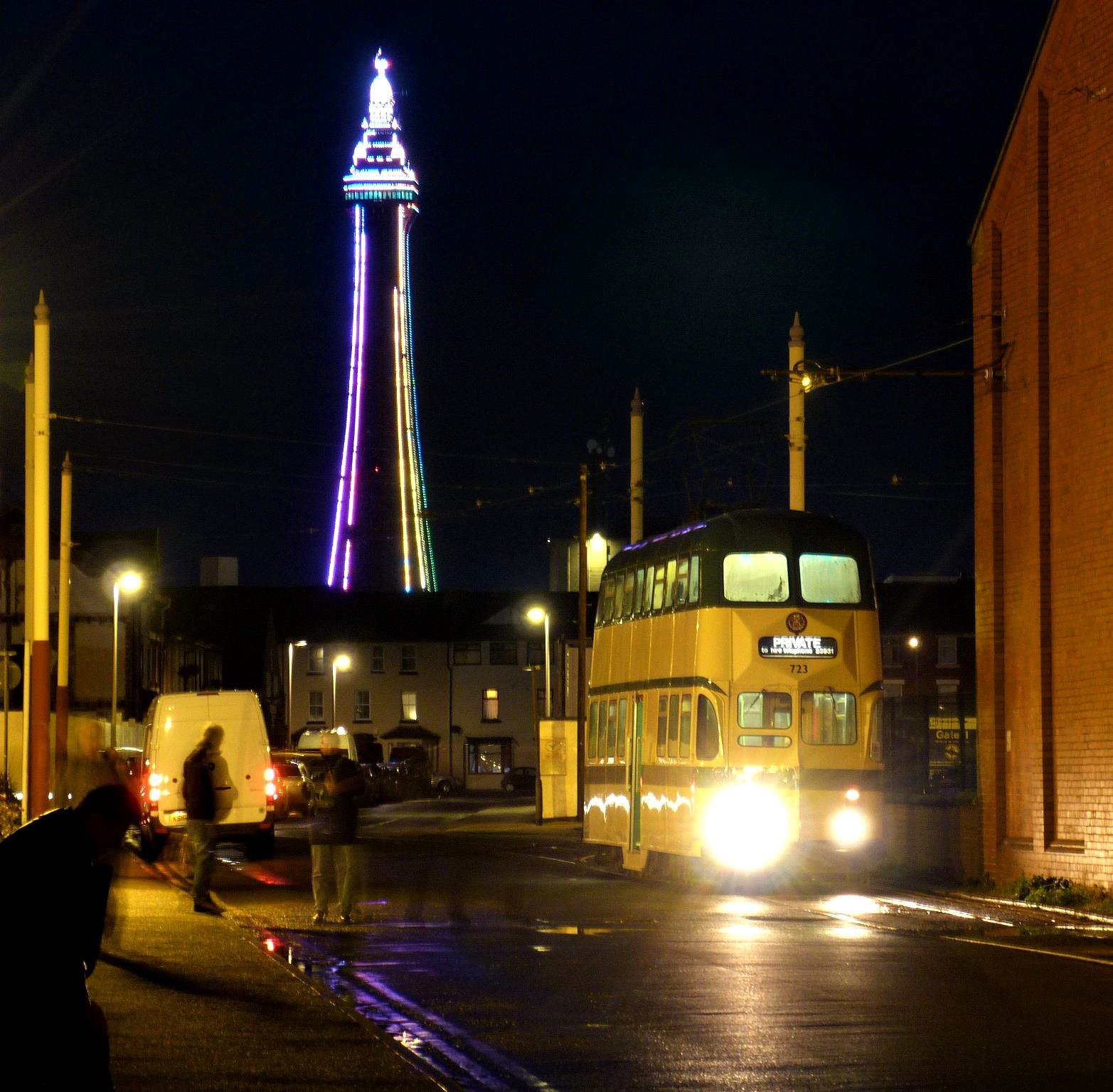 The end of the tour alongside the fitting shop.
[Jim Sellens]