Twelve enthusiasts met at Cattal station where we were joined by our NR host, Allen Goodall. We caught the 09.27 train to Harrogate, having noted with interest the Down starting signal with the motor operated Whixley distant below it. Our first call was to the LNER type 15 box, dating from 1947, at Harrogate, once Harrogate North and still so named on the outside. The original frame has been reduced in size; only levers 21-65 now remain and 13 of these are spare. There is a small switch panel, installed 29 October 2012 to control the line to Armley Junction at Leeds, which replaced mechanical boxes at Rigton and Horsforth. Harrogate station has two platforms and a middle reversible through line, now normally used only for stock stabling. There were previously two more platforms on the south side on land now covered by a multistorey car park. Oddly the lines towards Leeds and towards York are both designated 'Up' ('Up Main' and 'Up York'). 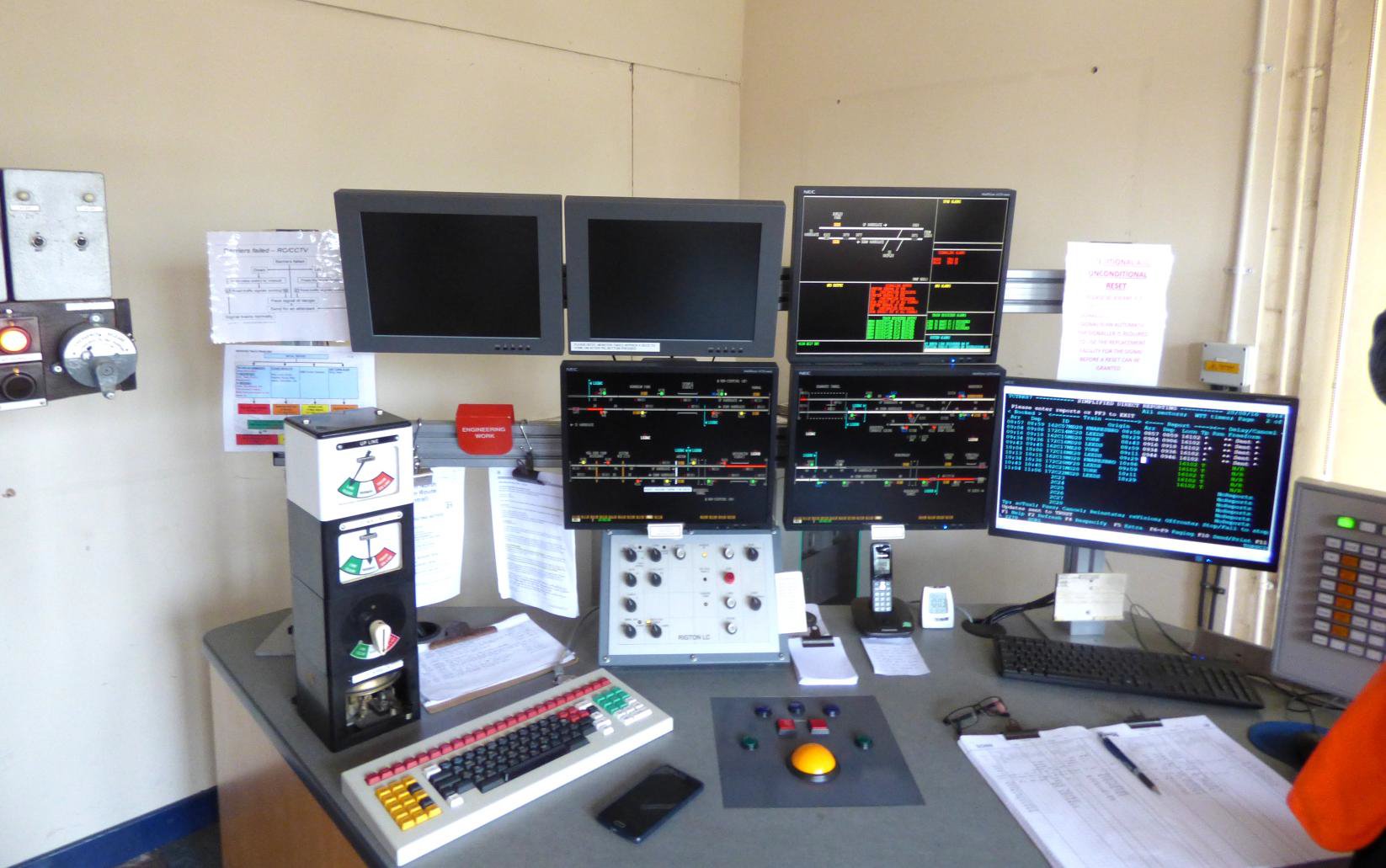 We next caught a train to Starbeck, passing the sites of the junctions at Dragon and Starbeck North; the Leeds Northern line closed to passengers in 1967, but remained in use for freight from Starbeck to Ripon until 1969. The present box at Starbeck was formerly Starbeck South and, until 1951, a line ran south from here to Pannal on the Harrogate to Leeds line. The former divergence of this line is clearly visible and for a while part of the route still served Stonefall sidings and later a preservation site, both now disappeared. The signalbox is a NER type S1a of unknown date; it now has 22 levers (17 are spare) and controls a level crossing. Only one signal is a semaphore, the Up home north of the platform. 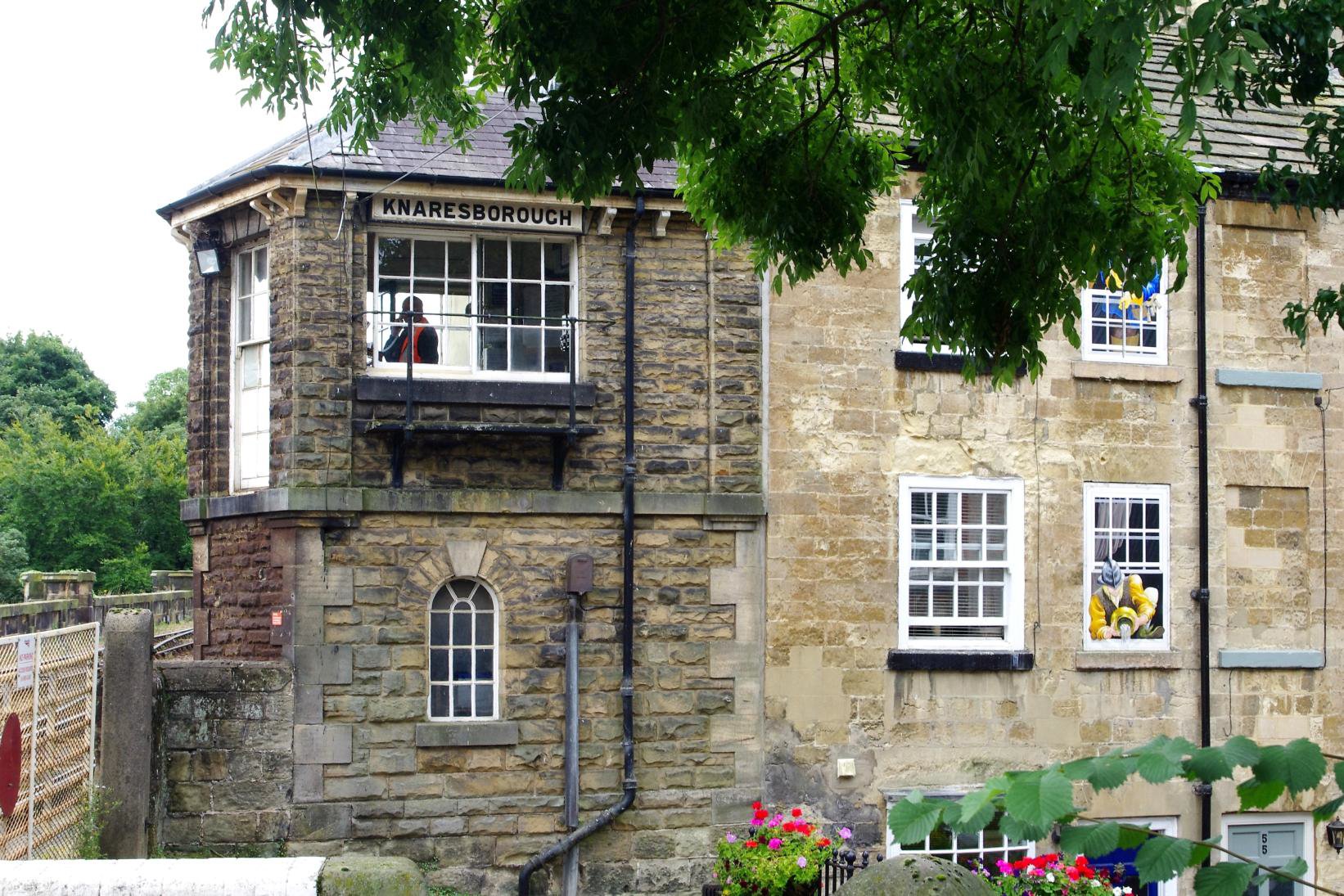 The unique Grade II listed Knaresborough signal box. Note the painted 'windows' to the right of the box.
[Nick Garnham]

We then boarded a Knaresborough train, passing en route the gate box at Belmont, where until about 1908 a curve came in from Stonefall. The box at Knaresborough is small and of a very unusual shape; it is of NER origin dating from about 1873, making it one of the oldest still in use on NR. It has 10 levers (and two for the wicket gates) with, unusually, no spares. Because of restricted space, we split into four groups for the visit, giving the rest of us time for coffee in the rather pleasant 'Old Ticket Office' on the Up platform. [Not a Starbucks at Starbeck then - Ed?] Two trains were observed reversing over the crossover to return to Harrogate via the Down platform. The points from the Up line have a facing point lock, enabling passenger trains to return from P2 in service if necessary. 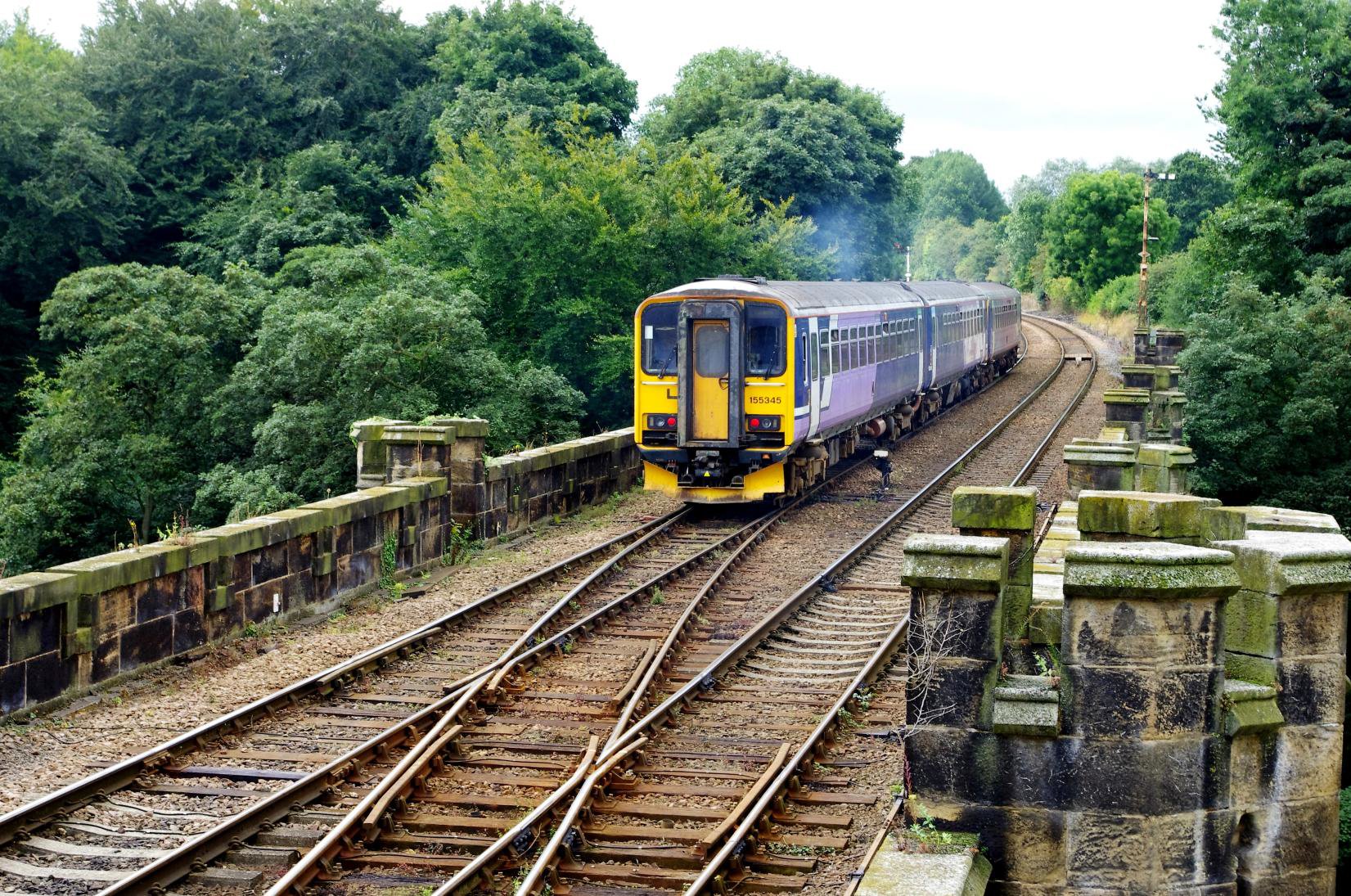 A Leeds train that terminated at Knaresborough shunts ECS from P2 to P1 on the viaduct.
[Nick Garnham]


Our next train took us back to Cattal over the single line controlled by electric token. This was reduced from double track on 16 December 1973 by BR. Cattal signalbox, by the crossing there, is a NER type 'S5', about 1892 vintage. It has an odd frame split into two: levers 1-4 on the one side and 10-15 on the other. There are two spares. We said goodbye to and thanked our host here, since he was due to take over as signaller at 13.30. From here we continued eastwards in cars to Hammerton. This has a most unusual arrangement in that the frame (of 10 levers with one spare), once open on the platform, has been enclosed in a 'wooden cupboard' since 1972. Instruments are in the adjacent station building. 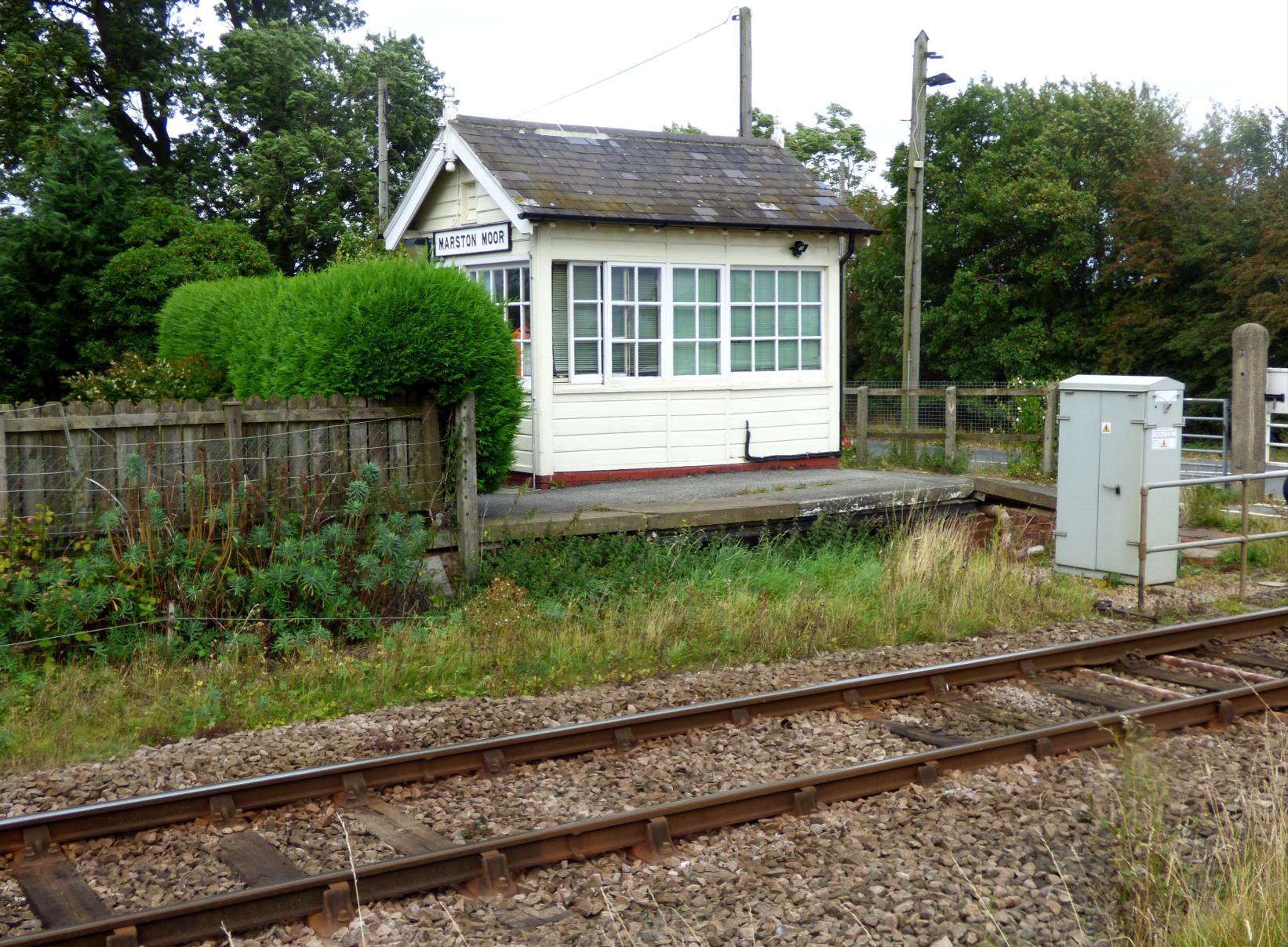 The grade II listed Marston Moor gate box, on the station platform (CP 15 Sep 1958), the level crossing is off to the right. Contrast this with https://goo.gl/LRQh7Y. 'Ivy' appears in one picture.

We next visited the gate box at Marston Moor where Ivy, the signaller, told us tales of incidents over the thirty years she has worked there. The frame, like that at Cattal, is split into two (with an armchair in between), four levers (with a spare) on one side and three on the other. Information about trains approaching is indicated to her by the bell signals between the neighbouring boxes. We learnt that it would be possible to pull off the home signals in both directions on the single line at the same time, but, not surprisingly, this is not permitted! The cabin dates from 1910 (an NER type 'S5') and until 4 June 1972 when the line was singled it was also a block post. [The 'Northern Powerhouse' project includes redoubling of both single-track sections - Ed.] We inspected the remains of the station (closed in 1958) and then split up to return home, although some of us went by way of the crossing frame at Hessay and the signalbox at Poppleton, which we otherwise could not visit on this day.

Our thanks are due to Allen for making the visits possible and for Nick Garnham for the arrangements.