This was our fifth charter with TPE; these railtours have now raised a total of £115,000. A slightly smaller group of non-'normal' passengers re-assembled on Manchester Airport P4 where the stock had stabled overnight following the previous evening's trip (BLN 1261.1394). An extra unit was added to give all three remaining available TPE class 170 DMUs, an impressive 6car train. Some may have been heading west to America, but tour participants were going the opposite way to the far east (of England's) exotic destination of......Cleethorpes (yet again!). The train left slightly early for an uneventful run to Manchester Piccadilly P1, where most participants boarded. Plentiful supplies of food and drink were also loaded. 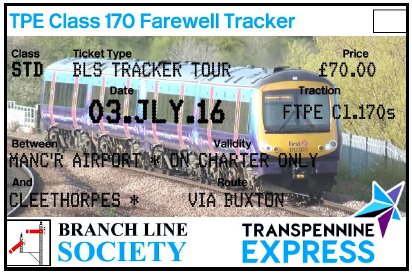 Again slightly early it was off towards Sheffield along the ex-Woodhead route to Guide Bridge. At Guide Bridge East Jn the Up & Down Passenger Loop was taken, past the former Dewsnap Sidings. Then through Hyde and Romiley to New Mills Central, in a very cramped position by the River Goyt. At New Mills South Jn, with its Midland Railway (MR) signal box, the route was through the Up Goods Loop before a final passenger pick up at Chinley, now just a single very wide island platform.

At Chinley North Jn, the train turned right continuing on to the MR's onetime main line to St Pancras. This was unfamiliar territory for Class 170 units (with thanks to our GBRf driver conductor). Passing through dramatic Peak District scenery, Peak Forest and Great Rocks quarries were reached. Several locomotives were stabled and some industrial shunters were working on a Sunday morning. Leaving the former main line it was sharp right at the former Peak Forest Jn to the site of Buxton Jn through more superb scenery, at its best on this lovely long sunny summer day. The stunning 8½ mile Monsal Trail cannot be recommended too highly here, along the trackbed and through the (lit) tunnels from the site of Millers Dale Jn (once the third point of the triangle here) east to just beyond Bakewell.

Buxton was soon reached, but not the station. Amending (BLN 1261.1414), our TPE Class 170 Farewell reversed on the 'Engine Run Round Line' believed to be its first passenger train; at Buxton XYZ sidings (X and Y being long disused). No one on board knew the origin of the 'XYZ' name. Can anyone assist? NR's Sectional Appendix (28 May 2016) now designates 'Road Z' on which loco-hauled freight trains (running between Dowlow/Hindlow and Peak Forest) reverse to run round as the 'Single Line Access Road' with the 'Engine Run round Road' to the east. The other two overgrown sidings to the west are 'Holding Siding' in the middle (formerly 'Y') and the 'Buxton Down Train & Snowplough' line (was 'X').

Then it was back through Peak Forest Down & Up through Sidings to Chinley South Jn, turning right to Chinley East Jn. The tour was now on the Hope Valley line with more beautiful Derbyshire scenery (apart from Cowburn and Totley Tunnels!), before the single line at Dore. Here a wait for a Down train as Dore West Jn to Dore Station Jn was singled by BR when traffic was declining (to save on pointwork and the cost of a new footbridge at the station) but this is now a significant bottleneck planned to be re-doubled as part of the 'Northern Hub' project. 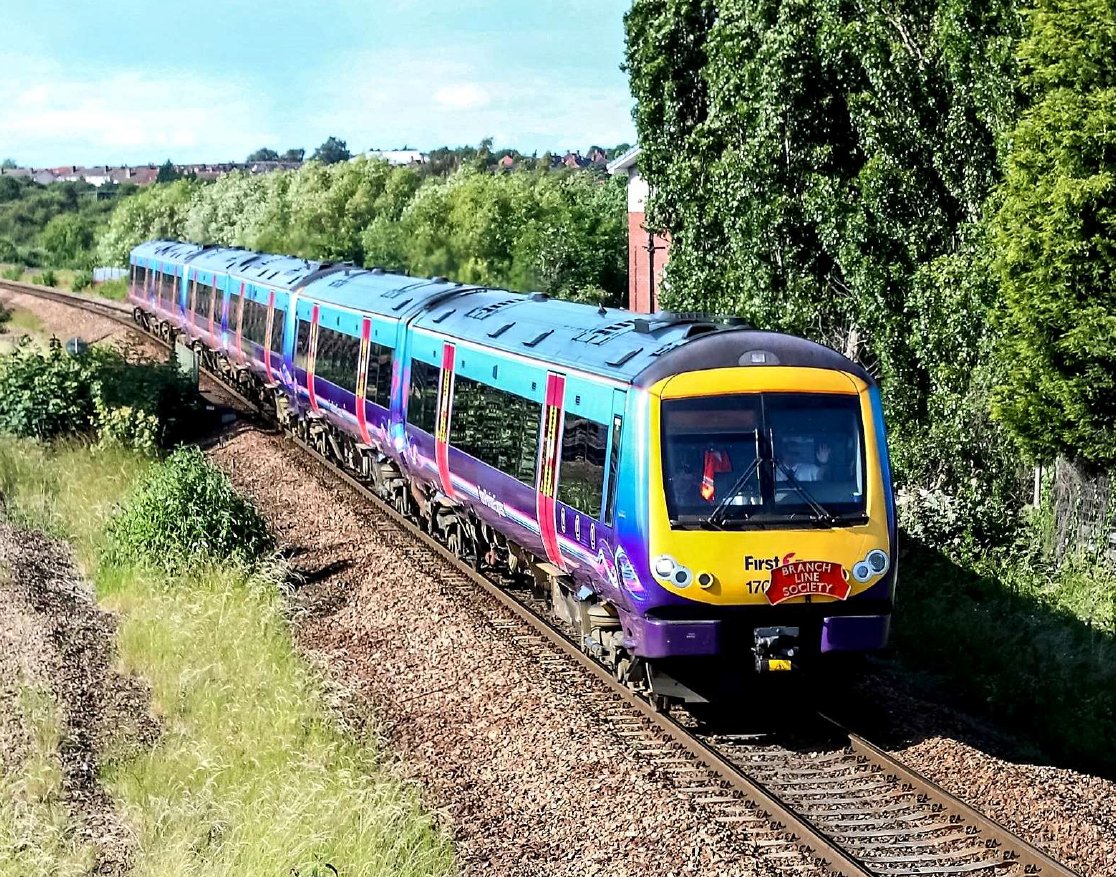 It was all downhill to Sheffield, reaching an extensive area totally 'unspoiled by tourism' and the Down Passenger Loop, to run through Up Station Siding No2 (one of the centre roads between P5 and 6). The south end of this was a nice red mark on the map for most on board. Continuing through a gloomy cutting and passing under the former 1,500V DC electrified Great Central Woodhead route, the train emerged to pass the closed Attercliffe Road station. Beyond at Mill Race Jn it crossed over to the bidirectional Up & Down Goods, then back out onto the main line to pass another closed station, Brightside (not very bright either) followed by the 'money-extractor' (Meadowhall shopping centre).

A third closed station, Rotherham Masborough, is now little more than bare platforms. At Aldwarke Jn the Roundwood Chord was taken and then Kilnhurst Up Goods Loop. One member commented that he had traversed the loop more times than the main line. Mexborough soon followed, then Cadeby Up Goods Loop. At Hexthorpe Jn it was right, then right again on to the Up Sheffield Goods between Hexthorpe Sidings on the left and GBRf's Roberts Road Depot with its brand new Class 66/7s on the right. Our beloved FS apologised for this 'mis-routeing', but no one was fooled! Passing the site of the 'Hexthorpe Hole' it was onto Doncaster Two Way Goods No2 around the station. Was this the first passenger train from Sheffield to Doncaster not passing through a platform line at either station?

North of Doncaster, the Cleethorpes line diverges to the right. However, this is the BLS, so the tour went left. At Carcroft Jn, the sharp curve round to Skellow Jn was taken, then past the new Doncaster North Chord on the left (now the principal route) noting the slower new realignment of the line we were on. Thorpe Marsh Power Station (open 1959 to 1994) on the right has all but disappeared.

At Hatfield & Stainforth, the Up Slow was taken past the former Hatfield Main Colliery which was being demolished, to join the Up Fast intermediately at 7m 16ch just beyond Stainforth East Ground Frame. Our ever-resourceful FS had to resort to showing an aerial photo to have this very rare move included! After crossing Keadby Bridge, (a fully operational sliding bridge which includes a public footpath) over the Stainforth & Keadby Canal and King George V Bridge over the River Trent, it was into Gunhouse Loop. This was unexpected by most on board. A short stop at that favourite haunt of BLS industrial railway fans (especially one from Hull), Scunthorpe - no sign of tourism here either - saw the tour proceed onto the Up Scunthorpe Goods, on the Up side, but then taking three crossovers to continue over the Up Scunthorpe Goods on the Down side! Regaining the Up Main, Appleby (not the Cumbrian one) was passed before crossing to the Down side again at Wrawby Jn on to the Down Cleethorpes Goods. All the semaphore signals went at Christmas, replaced by plastic 'Airfix' type LEDs.

After a fast run to just short of Grimsby the facing crossover was taken through P2, an unusual move. Then it was the single line and through the Up/Down Passenger Loop now with no booked passenger use; the previous one train a week was very 'hit and miss'. For many it was the third traversal of this loop in recent months (and one participant admitted he still needed the 'normal' route!). Arrival at Cleethorpes P3 was a little late. The tour had almost managed to cross the Meridian Line to the Eastern half of the World, more than those flying from Manchester Airport to America could boast! 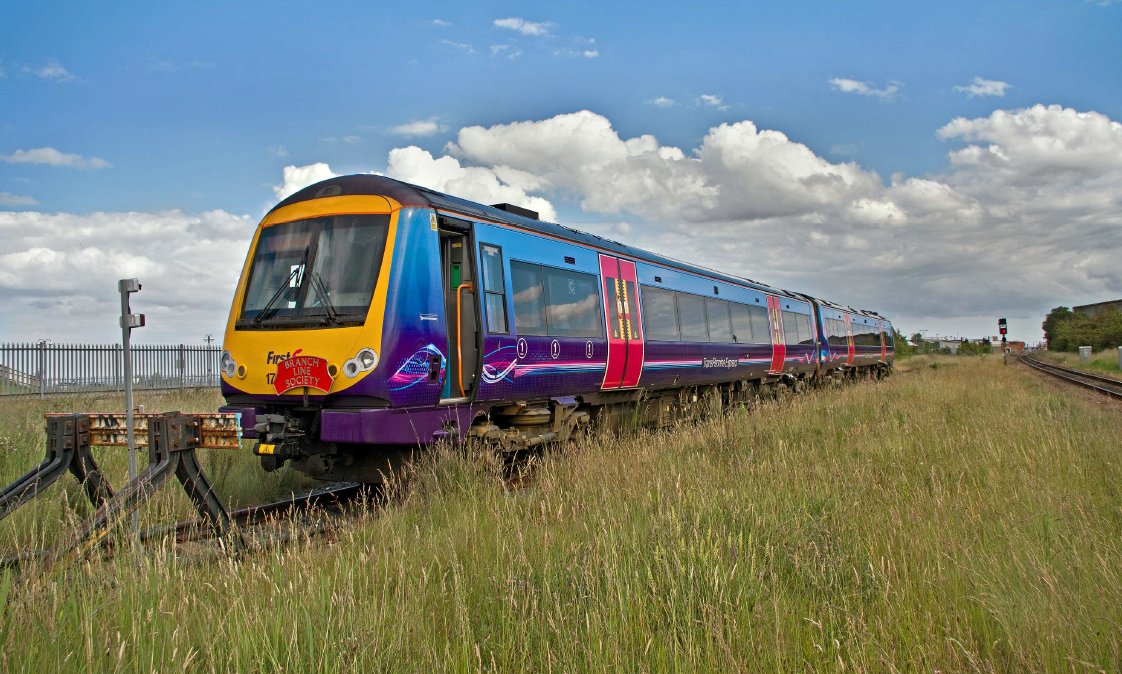 Cleethorpes Carriage Wash Siding end of line (second trip); 15.37 Sun 3 July, looking to the station with the Grimsby line on the right.
[Picture by the train driver on behalf of Geoff Plumb]

Now how could we spend our time in Cleethorpes on a lovely sunny afternoon? Our doctor Editor would frown upon chips and rock, so they will not be mentioned! What can be said is that there is unusual track at 'Cleggy' (as colloquially known; presence of summer wine not tested but no Mk 1 Compo). A 2-car DMU was detached and ran two (almost) identical trips from P3 through the fuelling point, back to the infamous, much sought after P4 (to within two carriage lengths of the buffers), and back through the carriage wash to the buffers and P3. The second trip went further past the carriage wash, but the first did more of P4. P4 was clearly unsuitable for (modern) normal passenger use now.

With everyone happy, fed and watered, it was time to head back from whence we came, but unusually for the BLS, by a fairly direct route as TPE aimed for a fast run. The main line was taken (to the delight of the participant who needed it) rather than the Grimsby Loop, and similarly to Hatfield & Stainforth. At the grade separated Bentley Jn the tour avoided Doncaster station and ran to Hexthorpe Jn, then via Swinton and Rotherham Masborough to Sheffield P8. This was achieved non-stop. After a brief crew change and set down it was via the Hope Valley and the third side of the triangle at Chinley. After passing through Hazel Grove 'bang road' (a fully signalled move) it was fast line at Edgeley Jn No1. The tour crossed to the Slow line at Stockport No1 and then onto the Down Goods east of Stockport station. The adjacent Down Main appeared to be little used. On Stockport Viaduct our train crossed to the Down Fast for an uneventful run to Piccadilly P5, where the tour terminated. Tour tickets were valid on a service back to Manchester Airport for those wanting to return. Thus ended another very successful tour, covering everything expected and more, in sunshine throughout.

Thanks to Kev and TPE for making it happen and all concerned for the many hours of planning and the enthusiasm shown including Bombardier (who sponsored one of the three units used on the Sunday), Skytrack and NR. As usual there was a great atmosphere on board and our two trips, with 164 participants Saturday and 173 Sunday, raised a very impressive £16,275 for 'Prostate Cancer UK' charity and 'Railway Children'. For more pictures of both of the tours https://goo.gl/3gSPgJ and others.