The day's fixture started off with a breakfast roll call before 65 participants (plus an infant - don't ask!) made their way to the Didcot Railway Centre (DRC) café for refreshments, a pre-departure briefing (as in brief!) and to await some delayed participants. The previous day had been the warmest of the year but this day felt like the coldest! It was clear from the start that Kev Adlam, with his BLS Fixtures Team as well as the DRC, had put a great deal of thought and preparation into the day. Expectations were running high and participants looked forward to 'reaching the parts that others cannot reach', including some lines never used by passengers before. It must have been good as even our esteemed PSUL compiler from Crewe was in attendance. 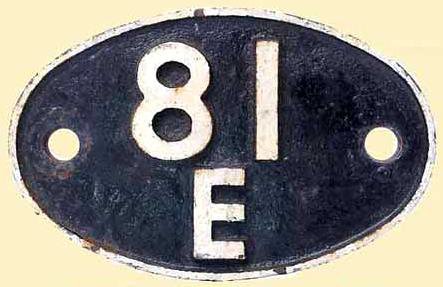 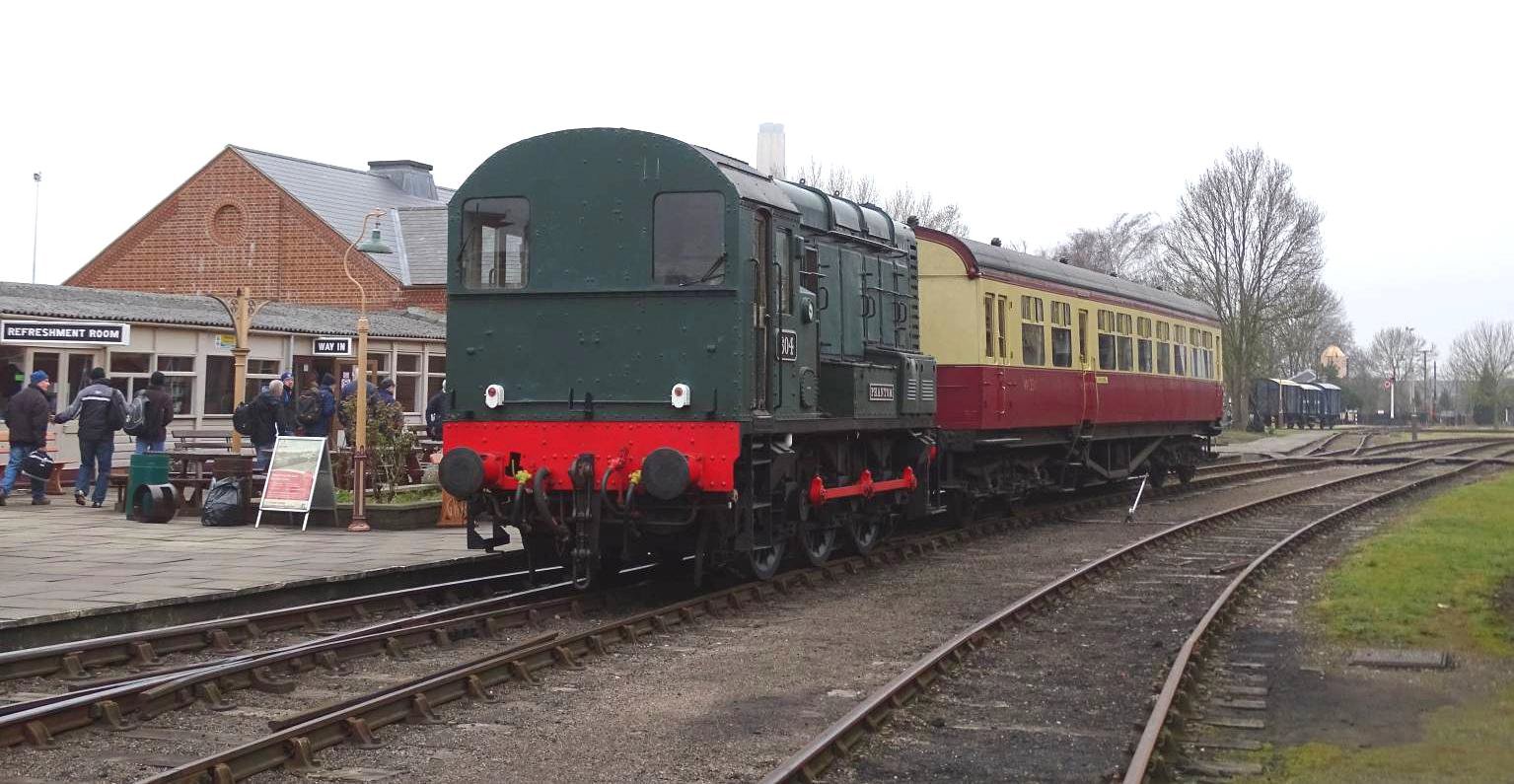 By way of background, Didcot, 81E was a former BR shed originating in the mid-19th century. Steam allocation included Halls, Earls and Panniers but with the phasing out of steam in favour of the Diesel Hydraulics, it closed 14 Jun 1965. The Great Western Society (GWS) took over the site two years later, moving in by train 'convoy' from their previous base on the Totnes Quay branch which CA 4 Dec 1967. Despite some uncertainty over the location's future use a few years ago, the GWS was offered a 50-year lease. Considering the limited length of the running lines due to operating within a triangle of NR tracks, the DRC manages to offer 'main', branch and even broad gauge lines! 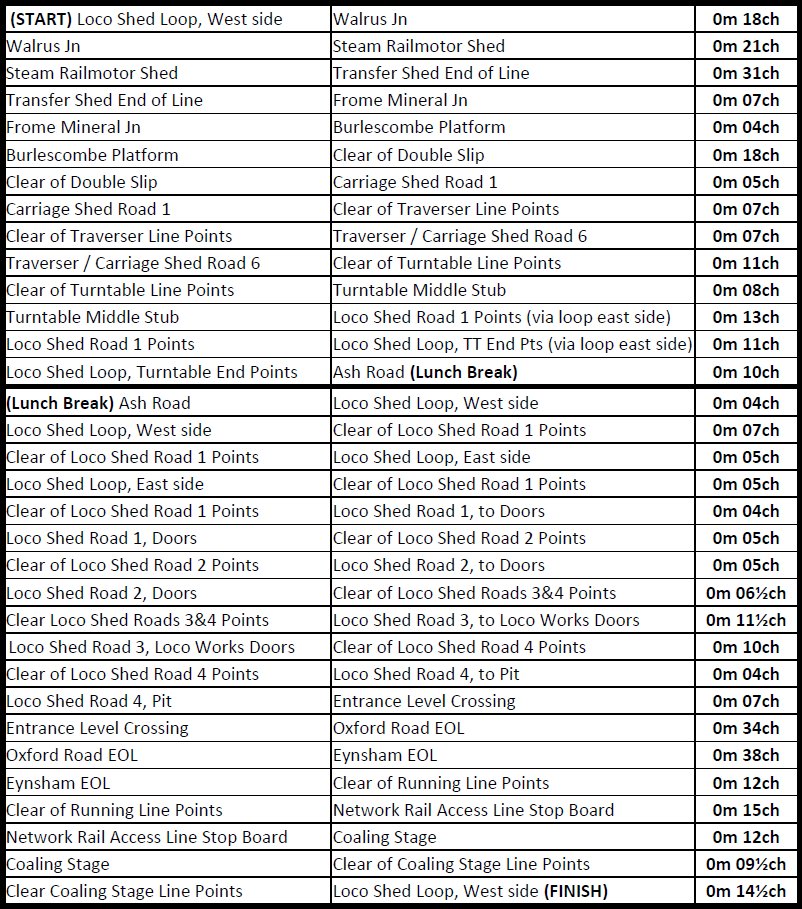 The detailed moves and mileages (total 4m 60ch) are thanks to member Jim Sellens.

Our railtour motive power was green liveried 08604 with the very suitable Hawksworth auto trailer 231 built at Swindon in 1951 giving plenty of room, comfort and visibility. The fixture was in two parts, the morning run covered the route linking the GWS 'mainline' to their branch down to the Transfer Shed. This also included the mixed gauge section, overlapping with the broad gauge track at its platform. For obvious reasons our train was unable to complete the rest of the broad gauge section (!) but did manage a first for a passenger train by running into the Steam Rail Motor Shed. The rest of the morning's highlights included a run onto the traverser, almost into the Carriage Shed and over the turntable. The traverser originally operated at the Midland Railway Works, Derby and was built in 1897. Initially steam shifted this was later replaced with an electric engine and it is now petrol powered. The 21-metre Ransomes & Rapier (1869 -1987) turntable and pit is on the site of the original 1932 GWR one. Somewhat out of place, it was actually built for the Southern Railway at Southampton Docks. A leisurely lunch break followed, allowing plenty of time to revisit the café, socialise, explore the site and 'spot' locos and stock. DRC carried out several shunts to free up access for the afternoon running by moving stock to the lines already covered. Those lunching in the café were entertained by an unlikely procession of rolling stock and dead locos passing the windows hauled by 08604. 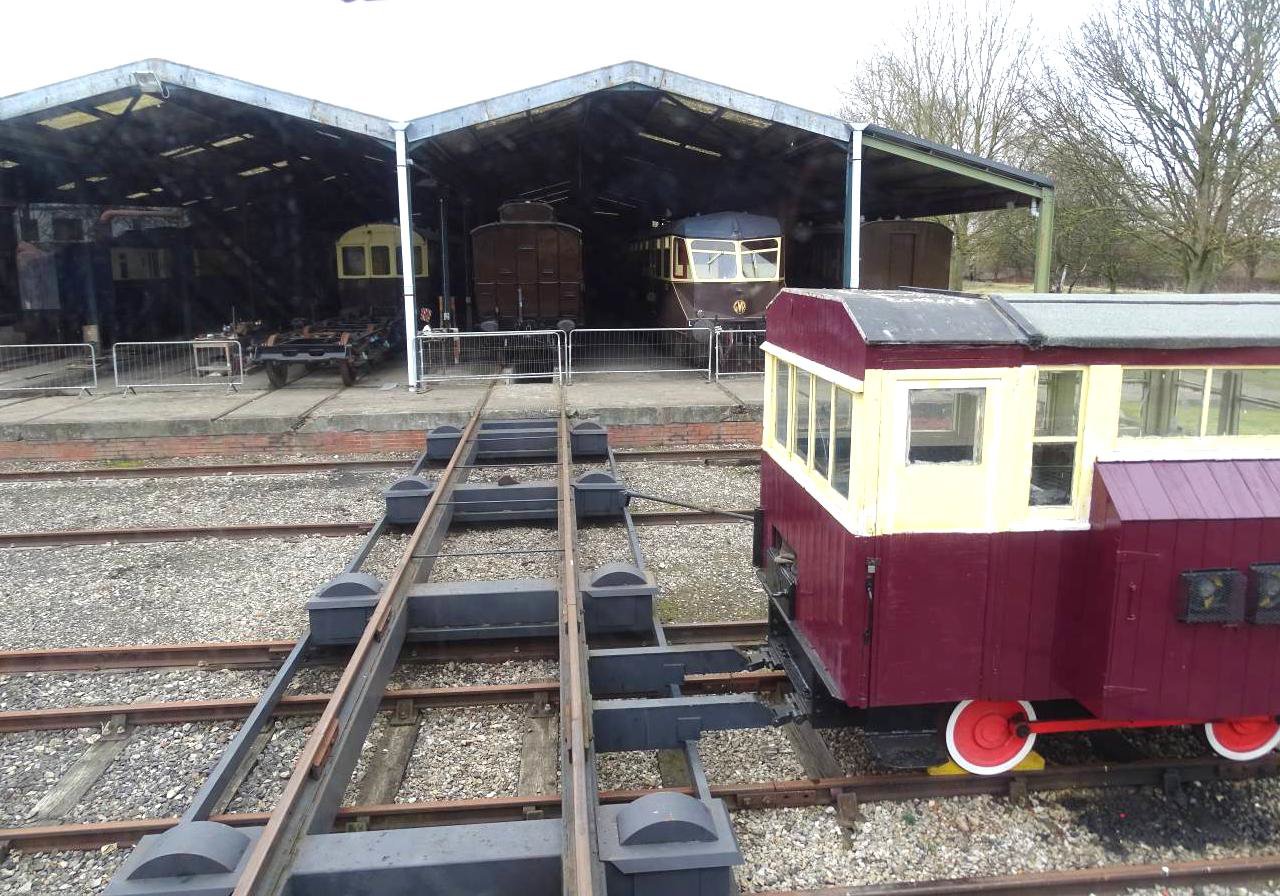 View from front of the train running onto the traverser [above]
… and onto the turntable [below]; the GWR railcar is a point of reference between the two pictures.
[both © Neil Greenwood 2016] 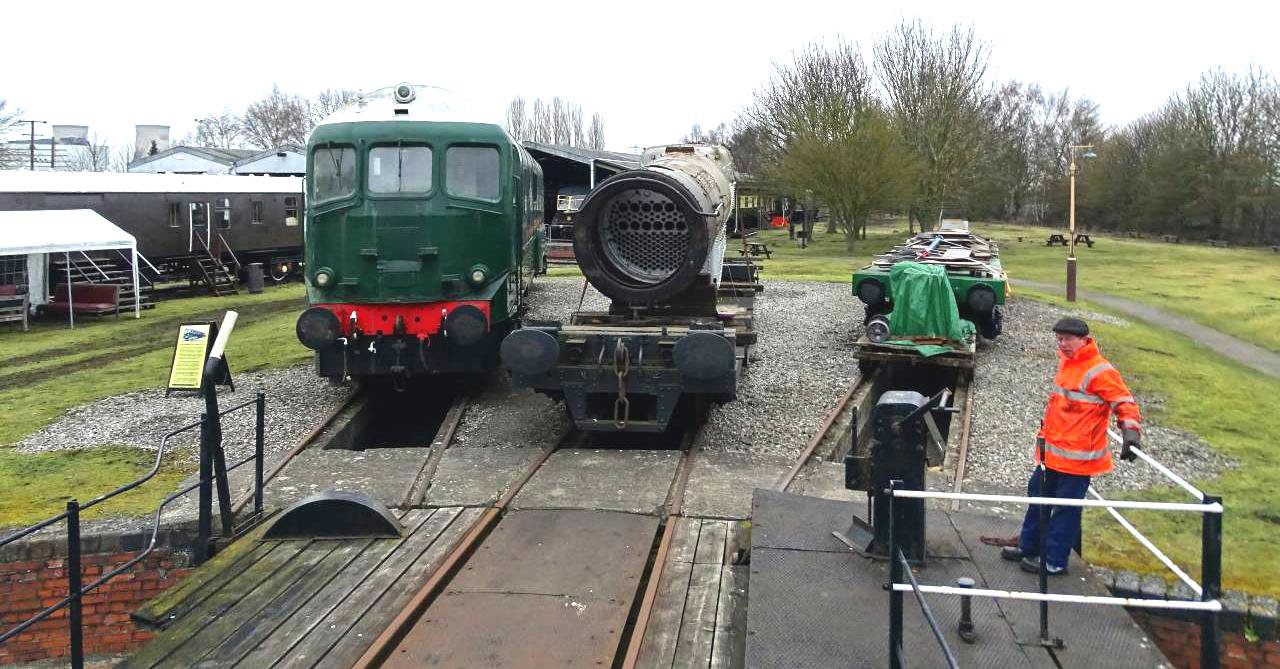 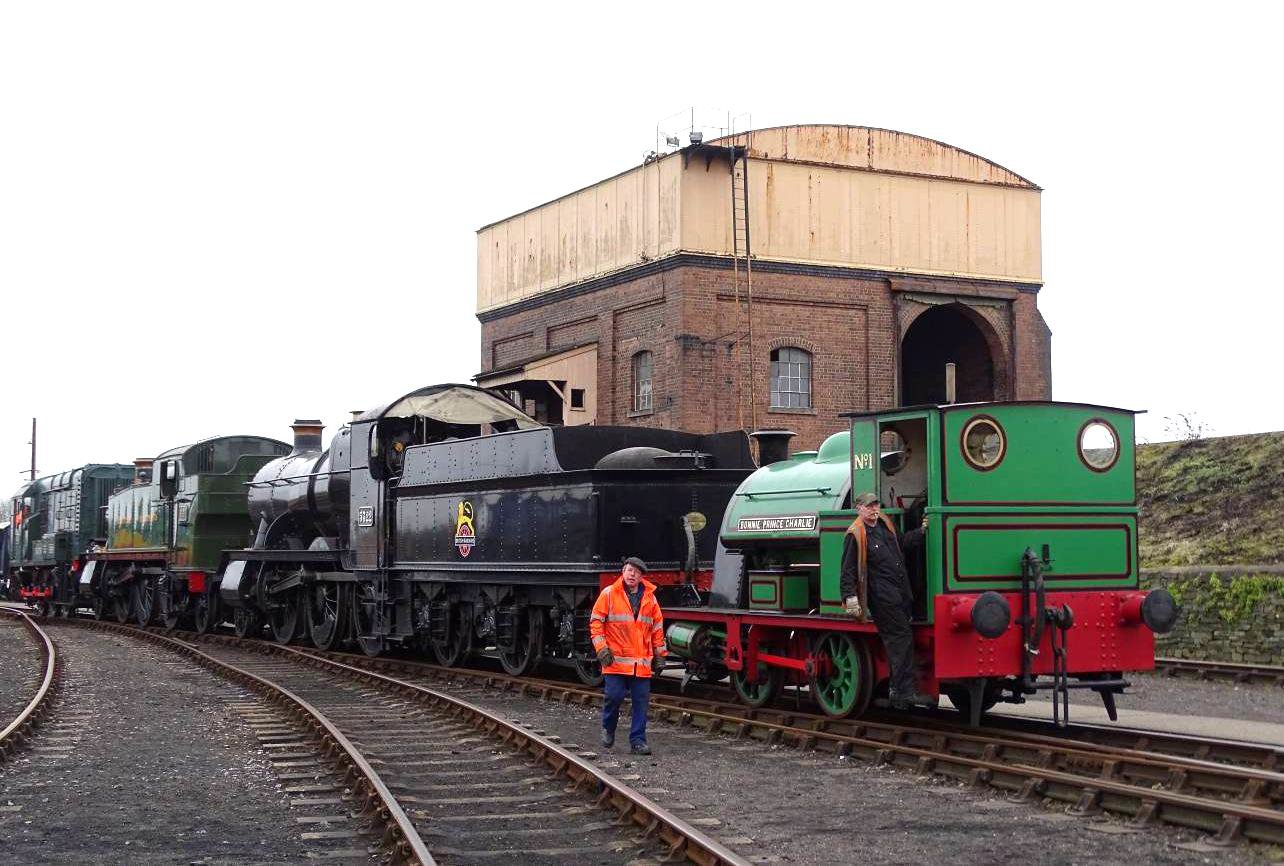 Lunchtime entertainment for participants - one of the locomotive cavalcades.
[© Neil Greenwood 2016]

The afternoon concentrated on the now cleared east end of the site. Initially the loco shed lines were traversed including Line 3 right through, almost into the works building. Then a buffer-to-buffer run on the 'main' line and towards the real main line, through the gate to the NR boundary.

The stage was then set for a grand finale … the first ever passenger run up the steep incline to and through the coal stage. The novelty was confirmed by the sudden appearance of what seemed to be every GWS volunteer on site with their cameras. The loco was not permitted to enter the building due to a weight restriction, so the tour stopped a coach length short of the end (but was propelled through the building). The stage is used to coal and water the steam locos. Coal is brought up the incline into the shed in rail wagons and manually unloaded into small wagons which are subsequently tipped into the loco tenders.

Our very enjoyable and sociable fixture expeditiously covered a considerable amount of track without fuss, largely due to the professionalism of the DRC staff and advanced preparation for the tour. Pointwork had been greased and foliage cleared the day before even to allow travel to the various buffer stops. Many thanks to all concerned at the DRC (well worth a visit on a public steam day http://goo.gl/ugarF adjacent to the mainline station) and particular thanks to the indefatigable Kev Adlam. 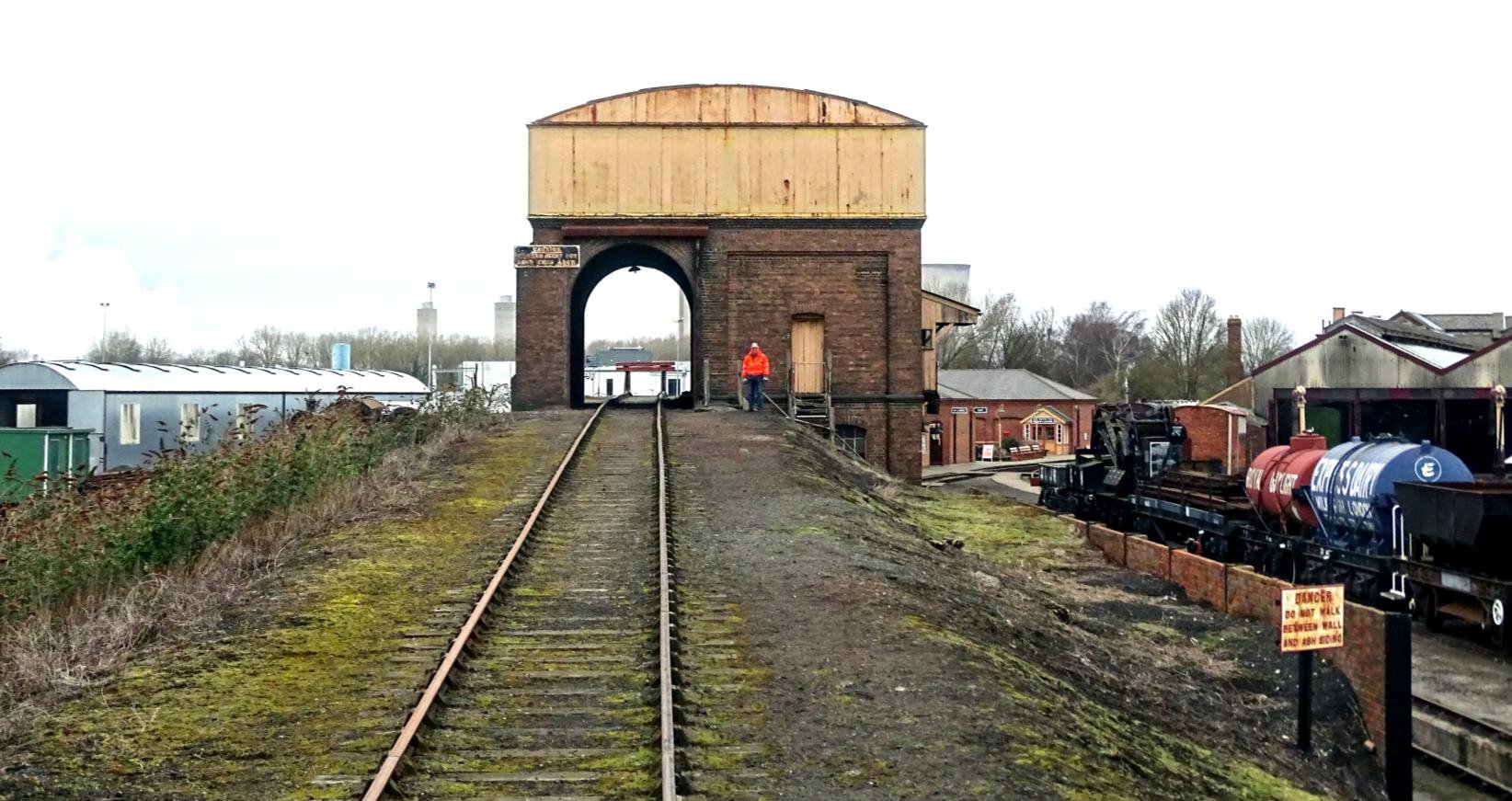 We were banking on Kev Adlam staging an 'on the day bonus'. View from the front of the train ascending the incline to the coal and water stage.
Didcot 'B' Power Station's twin chimneys are to its left in the background. One of the three remaining 'A' Station cooling towers is to the right of the stage building. 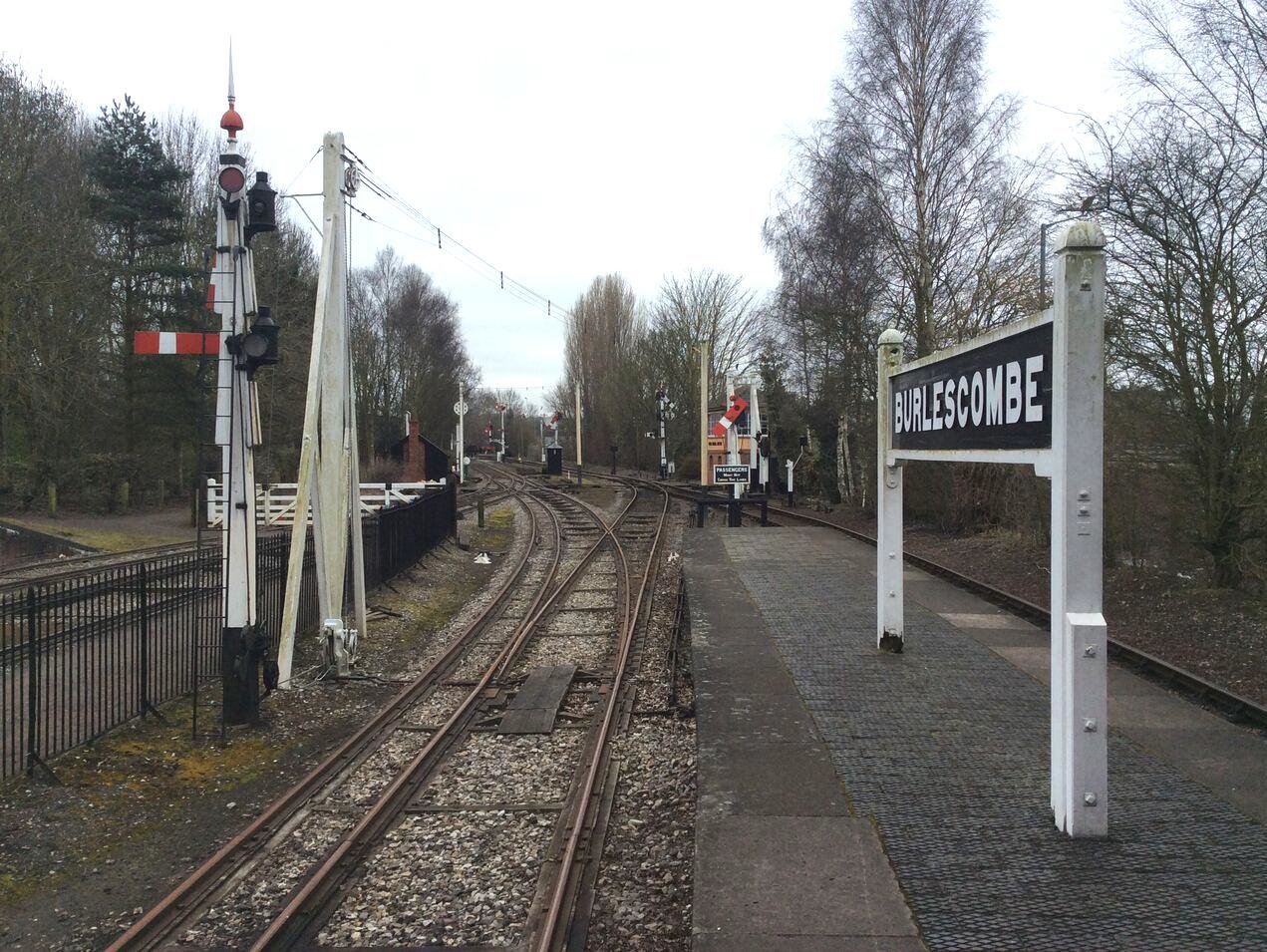 The connection (to the right) from the standard to the mixed gauge covered by our railtour which reversed in this platform giving overlap between the two.
[© Richard Maund 2016] 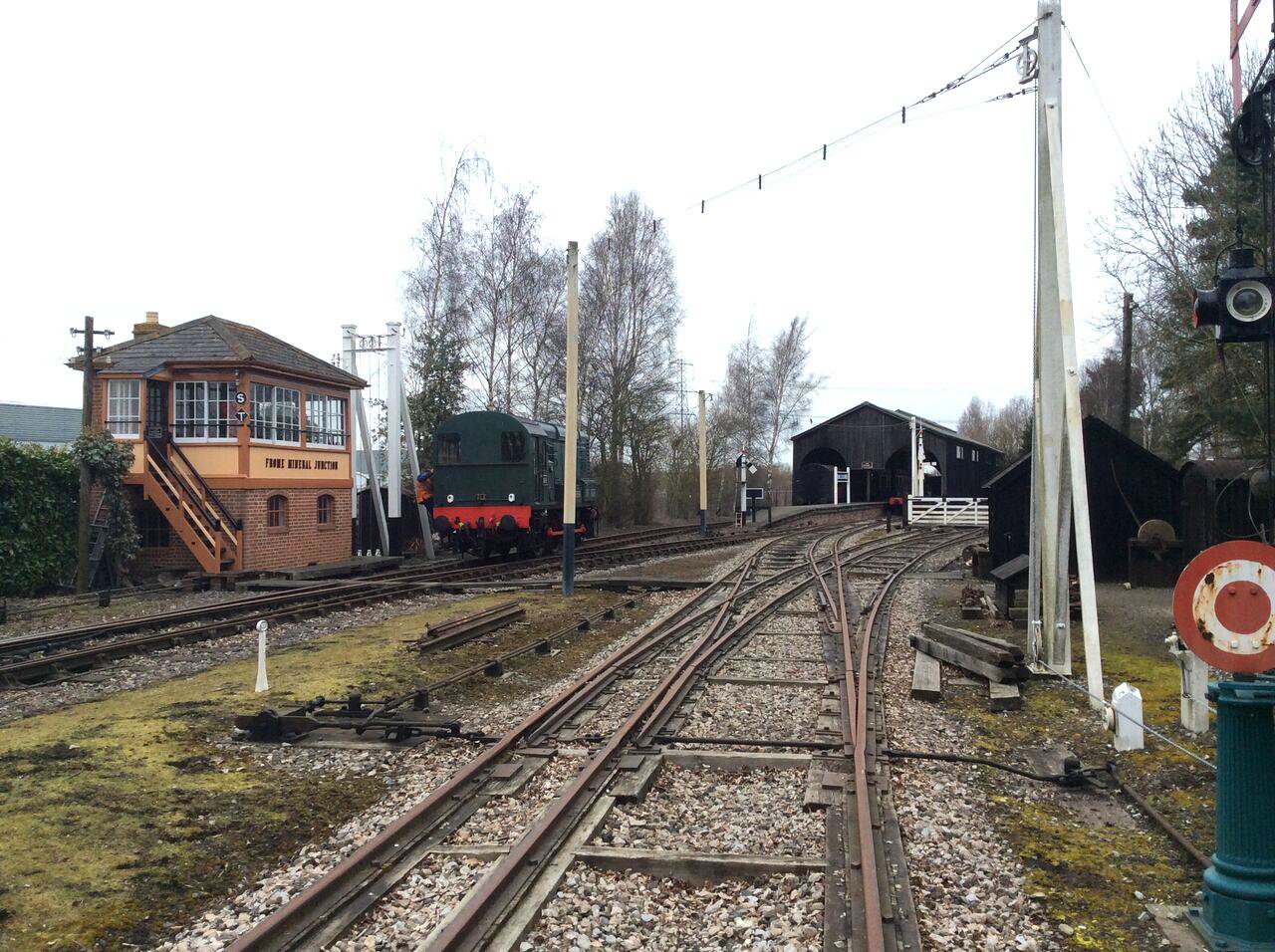 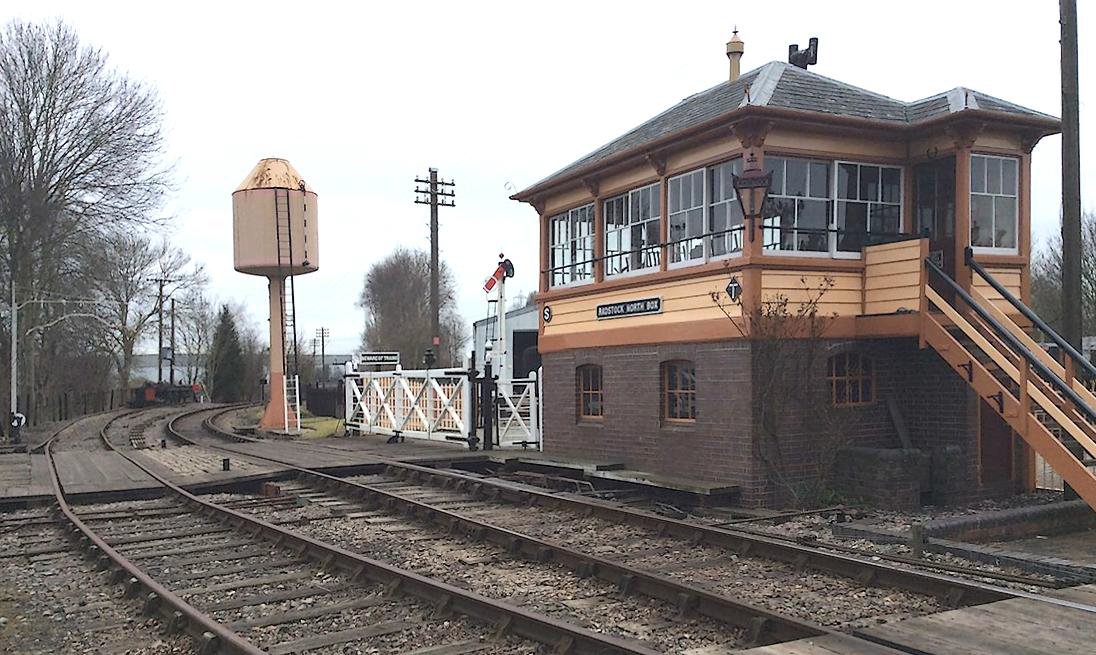 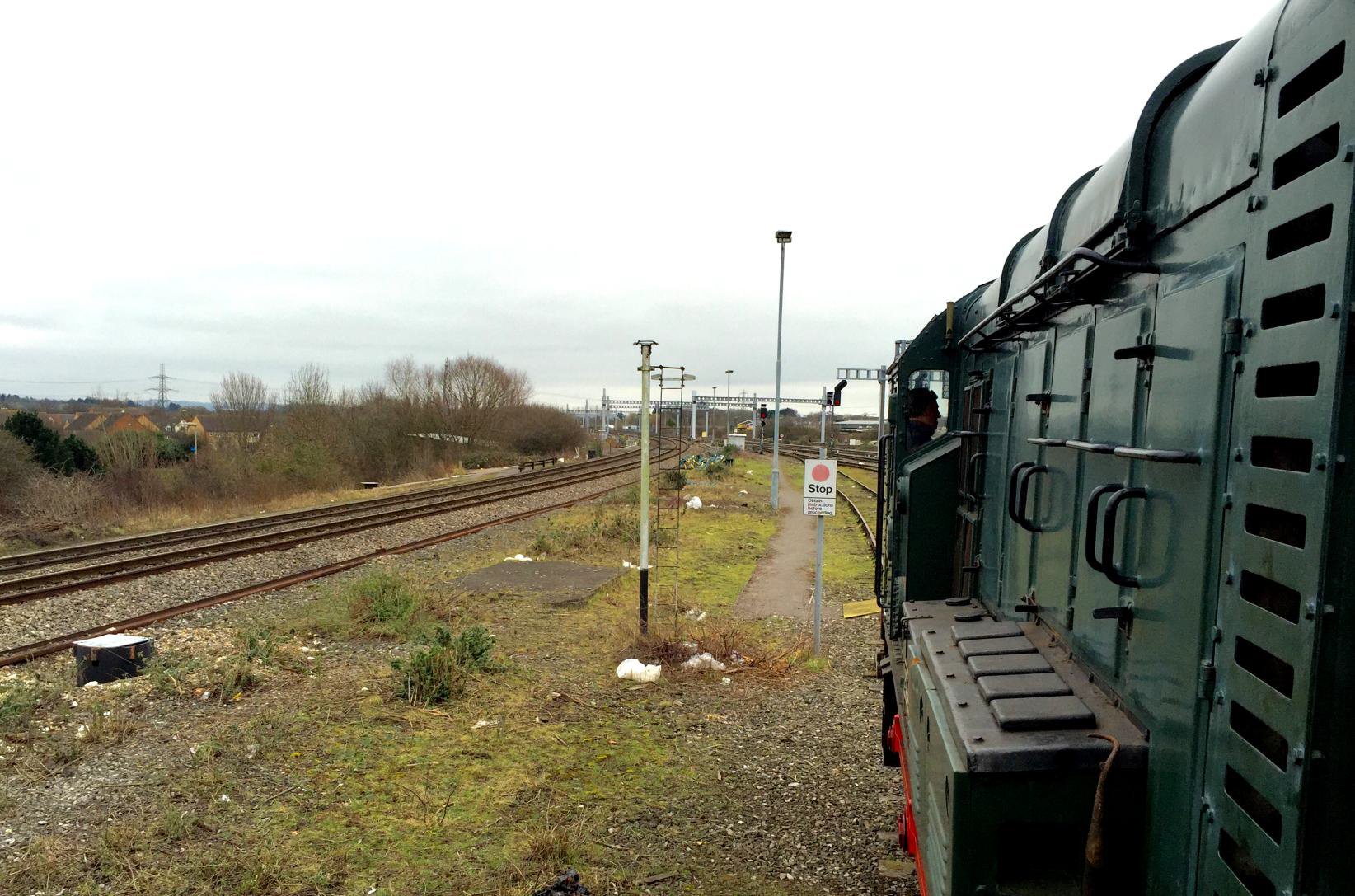 The NR boundary, looking east towards Reading; left are the Didcot Avoiding Lines with a new (covered) piling tube in the ground ready to take an electrification mast.
[© Kev Adlam 2016]