The planning for the day, kindly arranged by our member Rod Bryant, started last November. Despite 'appiering' quite simple on paper, he was expecting problems. However, it was still quite a shock after months of negotiating to receive an email very late the day before stating that the rare move on the Pier railway would not be possible due to a fault. All participants were warned in time and, despite the obvious disappointment, impressively 18 members still made the pilgrimage to Southend on a bracing Saturday in early March.

The cast from 'The End of the Pier Show'… rather windswept participants with the train in the rare left hand platform. The battery-powered
staff railcar is the other side. Pictures of the old cars in double track days http://goo.gl/SyuW7y and information/trackplan.
[© Rod Bryant 2016]

Southend Pier Railway: On arrival at the shore entrance, the Pier Manager met the group and said that the rare middle loop could not be used for our visit due to a fault with the signalling caused by salt water. The party travelled on the 10.30 departure in the rear coach hauled by 'Sir William Heygate'. The other loco, which some members saw, was in the workshops being stripped down. Two trains never run at once now. At the pier head of the 2,180yd, 3ft gauge railway, arrival was into the rare left hand platform only normally used to stable the battery powered staff railcar which was in the other platform. After 30 minutes at the end of the pier, return was on the 11.15 into the left hand (direction of travel) shore platform, negotiations ensued to see if it might be possible to cover the middle loop… 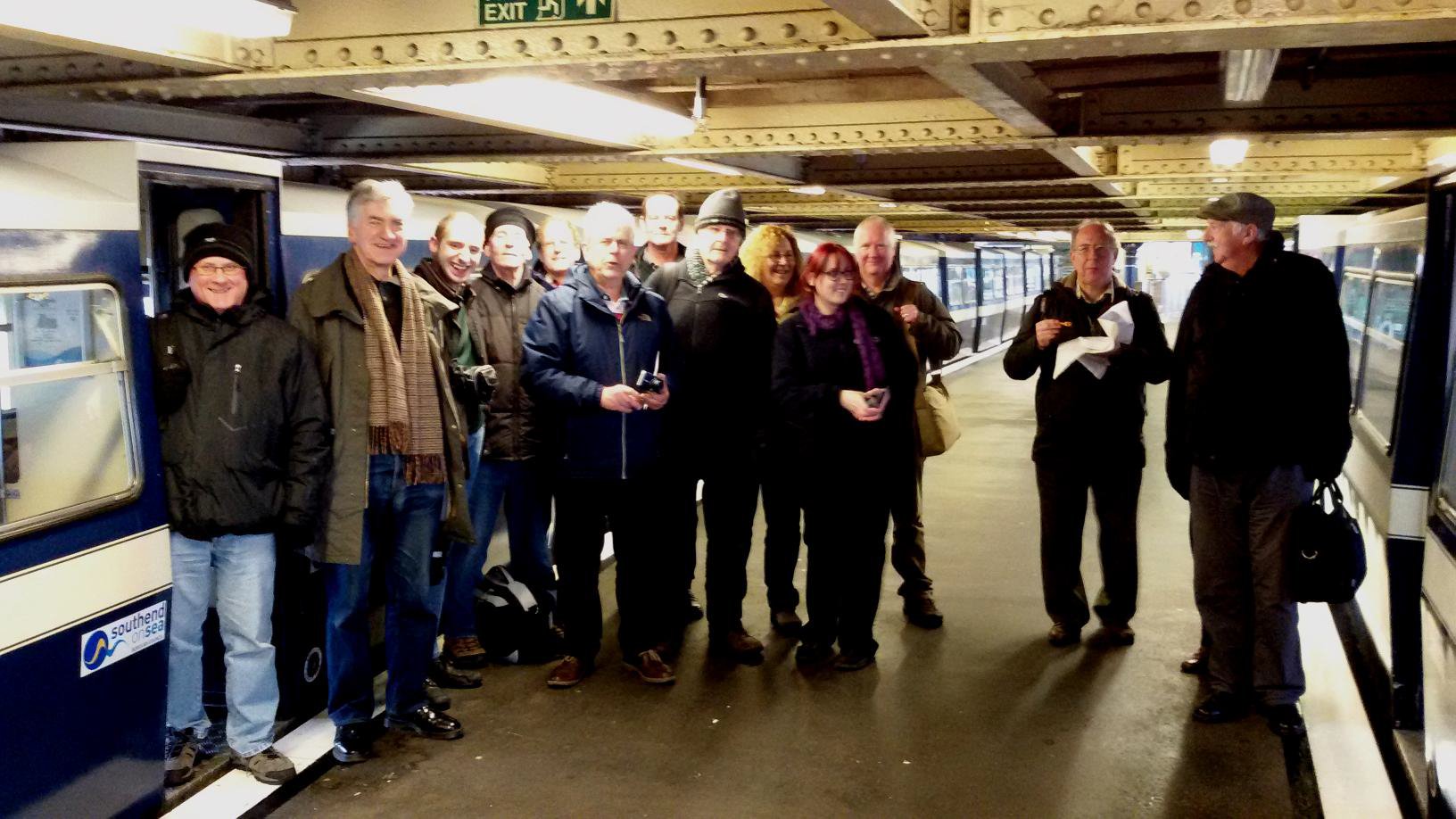 Back at the shore end. Member No.13 (right) thought he had escaped having his picture taken!
[© Rod Bryant 2016]

Cliff Lift:[Below]We were met by Cheryl, our operator and guide for this part of the visit; she said her job did have its ups and downs. Cheryl, a very interesting person, lifted participants' spirits, providing tickets and any information required. A BLS special followed for the party; incredibly the 4'6" gauge single track 130ft long track lift (height difference 57ft) had only been operating for a week due to a major breakdown in January! A return journey was made and we were invited to take as many pictures as we wished. 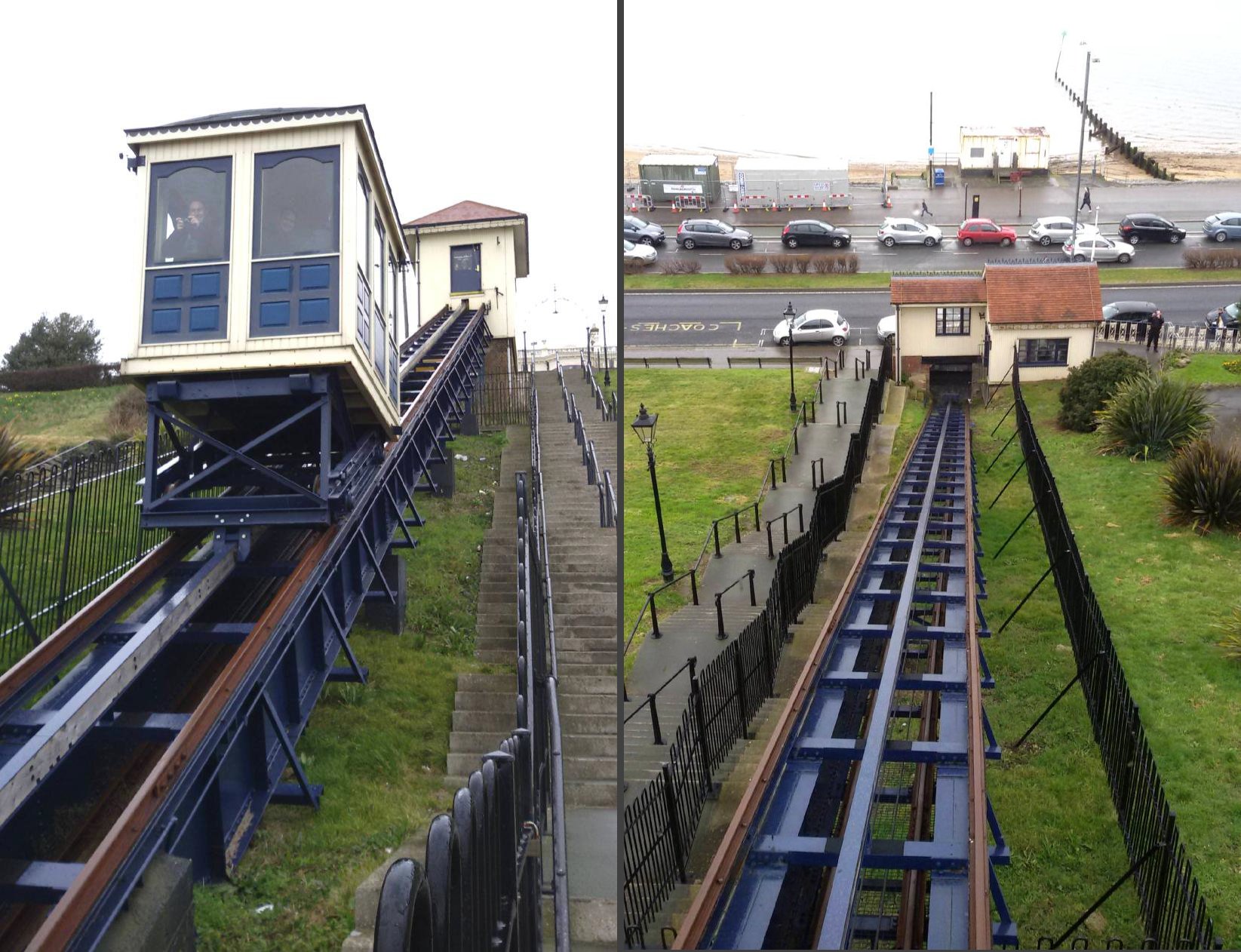 Heritage Vertical Lift: Participants could travel up and down between Western Esplanade and Clifton Terrace as many times as they liked in this small lift which, amazingly, can actually hold 21 people.

Southend Pier Museum: By kind arrangement of the Curator, Peggy Dowie, a special private BLS opening took place. It is a fascinating museum with old pier cars, many rare and unusual items. Participants could inspect one of the pier cars internally and a group photo was allowed (normal policy is strictly no photographs). Some were engrossed in the penny arcade machines, recalling childhood memories from the 1940s. Everyone signed the visitors' book and £100 was donated to the museum.

Postscript: Rod requested one last chat with the Pier Manager to see if anything could be done to traverse the middle loop before participants left. To his surprise and shock, he was told that an extra man was then on site who was willing to manually operate the points for members to traverse the middle loop! The elated group was invited to travel on the 14.30 train free of charge in exchange for a donation to Southend RNLI, an offer which everyone gratefully accepted. The train duly made its way into the elusive middle loop and waited while the pier end points were wound over. Stopping for a couple of minutes it even used the other platform at the pier head as the battery staff car had been moved back to its usual platform. A return run was made back to the shore end and a £30 donation was made to the RNLI station here from the Society.

Next was a visit to Old Leigh, by train from Southend Central via Leigh-on-Sea, then a short walk to the Lynn Tait Gallery to inspect the Pier car in the curiosity shop with many other fascinating items. To follow was what was believed to be a BLS first; a visit to a whelk stall. Osborne Bros have been trading since the 1880s and participants were treated to some delicious seafood, including the famous Jellied eels which one member said was excellent. Some tucked into whelks by the plate full and your organiser sampled a pint of prawns. Hot drinks were available, to conclude our visit to Southend-on-Sea. A thoroughly enjoyable and successful day was had by all and the rain held off. Many thanks to the indefatigable Rod Bryant for organising it and not giving up. A case of all's well that ends whelks?