The original objective of the day was to visit the two Banbury mechanical boxes, due to close on 23 July 2016 with an engineering blockade for major track alterations and resignalling. Banbury South Box will be immediately demolished as the Down Relief is to be realigned through its footprint. Thanks to some splendid co-operation from NR staff across a route boundary, the programme was extended to take in Oxford PSB and Leamington Spa as well. This allowed 21 participants to be split into four small groups, rotating between the sites by train, with military precision planning. Each group took a different sequence; this is your reporter's:

The Oxford instructions were intriguing; 'Assemble on the Down platform north of the footbridge by a gap in the palisade fencing where there is a small window through which the signaller's attention can be attracted'. This turned out to be entirely accurate; the PSB is an anonymous 'tin shed' behind Down P2 but the signallers have a remarkably good view out of the small window of the trains past the legs of any passengers who happen to be there. The room is quite small; most of the building must house the relay interlocking. It is a 1973 Henry Williams 'domino' type NX (Entrance-Exit) panel controlling BR Western Region (WR) E10000 relay interlockings. Unlike earlier WR panels which used a combination of switches and buttons to set routes (turn-push), this one uses buttons only (push-push), which by the 1970s was becoming the BR standard approach. There were two signallers on duty, who share the work over a 12-hour shift (nights and Sundays are usually single-manned). The controlled area is not large: Radley/Culham (fringes Swindon 'B' signalling centre, not the PSB) to Heyford (fringes Banbury South) and Charlbury (fringes Ascott-under-Wychwood) plus the Cowley branch. It used to control the Abingdon branch (TOU 9 Jun 1986) and to Claydon L&NE Jn. Marylebone IECC now control the latter to the Bicester Southwest Chord, not (yet) fringing with Oxford. The restricted Oxford layout, with only two through platforms, one unidirectional, and many trains that terminate, split or join in the station keeps the staff busy. The PSB had been due to close this year, but with the electrification delay and priority being given to the Paddington to Bristol route, re-signalling seems to have been delayed indefinitely to be linked with the proposed new Oxford station (two island through platforms). Presumably, the reinstated Down Relief will be controlled from here later in 2016 (BLN 1246.2223).

Leamington Spa is a nondescript brick building past the overflow car park northwest of the station. It now has a modern Westcad workstation with a Westlock electronic interlocking, but the box's claim to fame is that, in 1985, it was the first live BR Solid State Interlocking (SSI) installation that introduced computerised electronics into a safety critical signalling application. This visit was a trip down memory lane for your reporter who worked on the project in BR Research at the time. The development of SSI was a joint undertaking between BR and the two main UK signalling suppliers of the period, GEC and Westinghouse. It was very successful with over a thousand interlockings of this type in the UK and on overseas railways: Belgium, France, Portugal, Australia, Indonesia to name but a few. Somewhat remarkably, SSI modules are still being produced today, even though they still use an ancient type of 8-bit microprocessor a fraction of the processing power of the cheapest mobile phone!

The initial installation was a conventional push button panel controlling the station area and a few miles around. In 2004 this was extended to the Cherwell Valley route through Fenny Compton fringing with Banbury North, when the original panel was replaced with a Westcad computer workstation. In 2006 it was the trial site for the Westlock interlocking; the Siemens (ex-Westinghouse, ex-Invensys) second generation SSI. Control is to pass to the West Midlands Signalling Centre (WMSC) at Saltley and should be a relatively easy migration as WMSC has the same type of workstation and fringes the box.

Banbury North is a GWR 1900 built Type 7b box with a 95-lever frame installed in 1957 when there was major remodelling with rebuilding of the station. The frame is at the back of the box as it was installed while the original 1900 lever frame at the front of the box was still in use. Therefore, unusually the signaller pulls the levers with his back to the main running lines, The box has a noticeable lean away from the main line attributed to the heavy frame being on the 'other' side now. The condition of the frame and the instruments on the block shelf was superb; clearly well loved and looked after by the signallers; one of whom has even painted the lever frame in 'proper' GWR colours. There is a working coal stove; apparently one of only a handful still in use in NR boxes. Another interesting feature was that in preparation for the resignalling in 2016, switches have been installed in the track for new crossovers. Despite being clamped OOU, they have been added to the box diagram and alarm circuits to alert the signaller if they are not detected in the normal position. 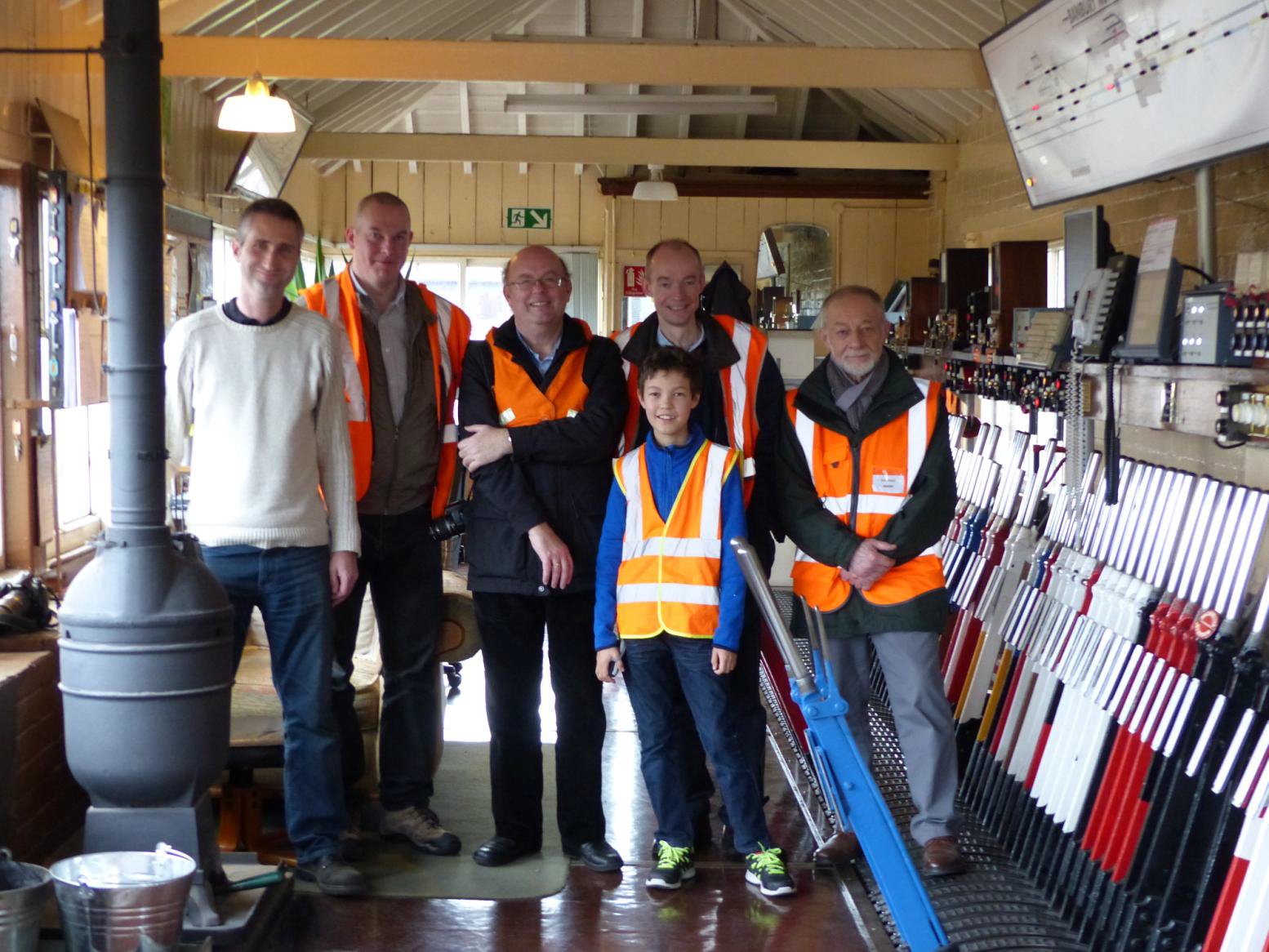 Banbury South is a similar GWR 1904 box with a 1944 lever frame. Originally 87 levers, it was reduced to 67 in 1991 to make room for a small panel (from 1992) controlling Aynho Jn. To avoid renumbering the right hand end of the frame signals, there is a gap in the numbering. Levers 1-61 are original, then three levers which were originally in the 62-67 block are now renumbered as 83, 84, 86. The very close proximity of the two Banbury boxes makes for some interesting (and very rapid) bell codes. Despite being track circuited, the short section between them is still worked Absolute Block and of note the final section of railway between London Paddington and Glasgow Central that is! An interesting mix of colour lights controls the main lines with upper and lower quadrant semaphores elsewhere. Very rare permissive instruments are available for the Up goods loop, although they are no longer used as such.

The fixture concluded with a guided tour around the Loco Workshop, an impressive engineering operation. For a Saturday afternoon, there was plenty of activity and several rows of locomotives, carriages and other railway vehicles to check off against the stock list. In conclusion, another excellent BLS fixture with all available track covered, all sheds visited and much ground frame, point clipping, numerous reversals and trap point operations observed. The use of a railbus again provided a perspective of the railway infrastructure and associated operation that is not always recognised when travelling in conventional rolling stock.

A most interesting and enjoyable day of contrasting visits at these very busy locations where members were made most welcome by NR staff. £1,000 was raised for charity thanks to our donation and NR match funding. Special thanks to the NR Operations Managers who facilitated the visits and to our members John Cowburn and Nick Garnham for coordinating all the arrangements.