The idea for this came after reading a February 2015 interview with Tim Shoveller, the new Railway Benefit Fund (RBF) chairman who was looking for ways to boost the charity's profile and fund raising. Having experienced our very successful TPE Tracker tours, I thought that the Branch Line Society would be an ideal partner to assist. As he was MD of the (now defunct) Network Rail/South West Trains alliance, I wondered if perhaps we could organise a railtour with South West Trains (SWT - Tim is the MD too!) to raise money for the charity. I contacted our Fixtures Secretary and he 'set the wheels in motion'. 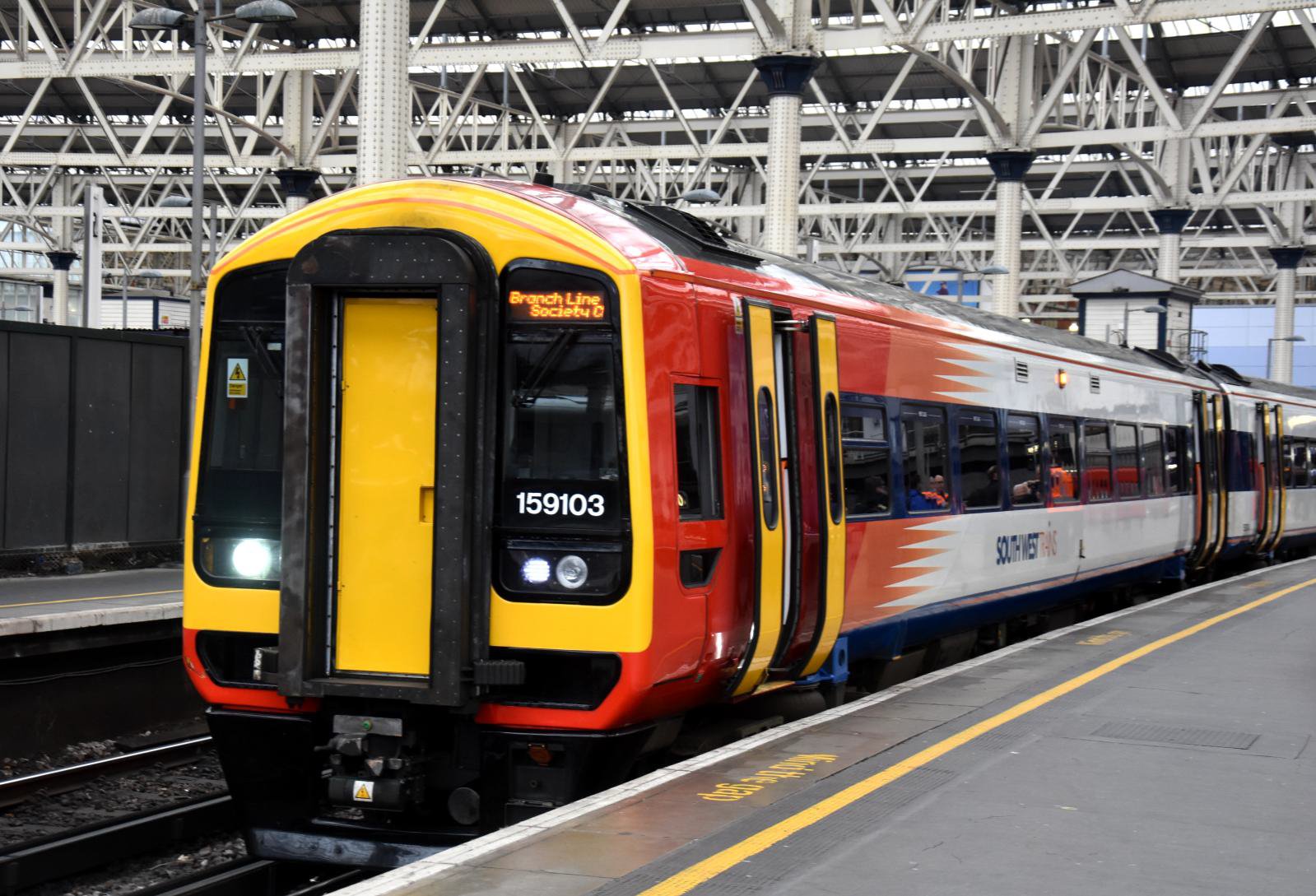 After the initial discussions, I was asked to propose a railtour route with suggestions to include Salisbury depot and the Yeovil Railway Centre at Yeovil Junction. After some head scratching, a route was devised visiting several choice locations on the way. However, this proved to be somewhat overambitious in terms of the locations, route availability of the stock and driver route knowledge. As a result, a suggestion was made by SWT that perhaps the best approach would be to have, on separate days, a DMU 'outer' tour and another EMU 'inner' tour. After further work by SWT, a route was proposed for the DMU outer tour, which was thought to be the optimum with the traction and available time. This was put to NR for validation and our first RBF Tracker tour began to take shape.

There was a slight personal complication when the proposed tour date was advised, as I had planned to be away on holiday! However, slightly amended plans enabled an arrival back the day before the tour. Fortunately, this was on schedule unlike my luggage, which decided to enjoy an extended break!

On the morning of Saturday 7 November 2015, arrival at London Waterloo found a large crowd of familiar faces eagerly waiting beside the barriers. The train had yet to arrive but already there was an air of enthusiasm, this increased as participants were allowed through the barriers and contact was made by one of the stewards with someone on the ECS. The stock arrived at 07.51 formed of 159003 and 159103 at the country end. Departing as 1Z61 at 08.02 from P10 the tour proceeded as booked to just before Woking station, then crossed to the slow line and then back to the fast after passing through Farnborough station. This was due to a track circuit failure at Woking! At Basingstoke at 08.51 the station monitors advised that the tour was the 08.46 to Weymouth formed of 6 coaches. Whilst this was correct, it seemed to cause some confusion amongst the non-railtour passengers ('normals'). After picking up the remaining participants, the DMU traversed the first highlight of the tour at 09.32, the Laverstock loop. It then headed for Southampton and on approach to the station crossed from the Up slow to the Down slow and into P3. From here, the next highlight was Northam Traincare Depot Reception Line. After a reversal here, the RBF Tracker proceeded to Southampton Down goods loop to reverse and run into Southampton Down Bay Siding (formerly bay P5, not used as such now), for a short break and the customary group photographs and charity cheque presentation on the platform. 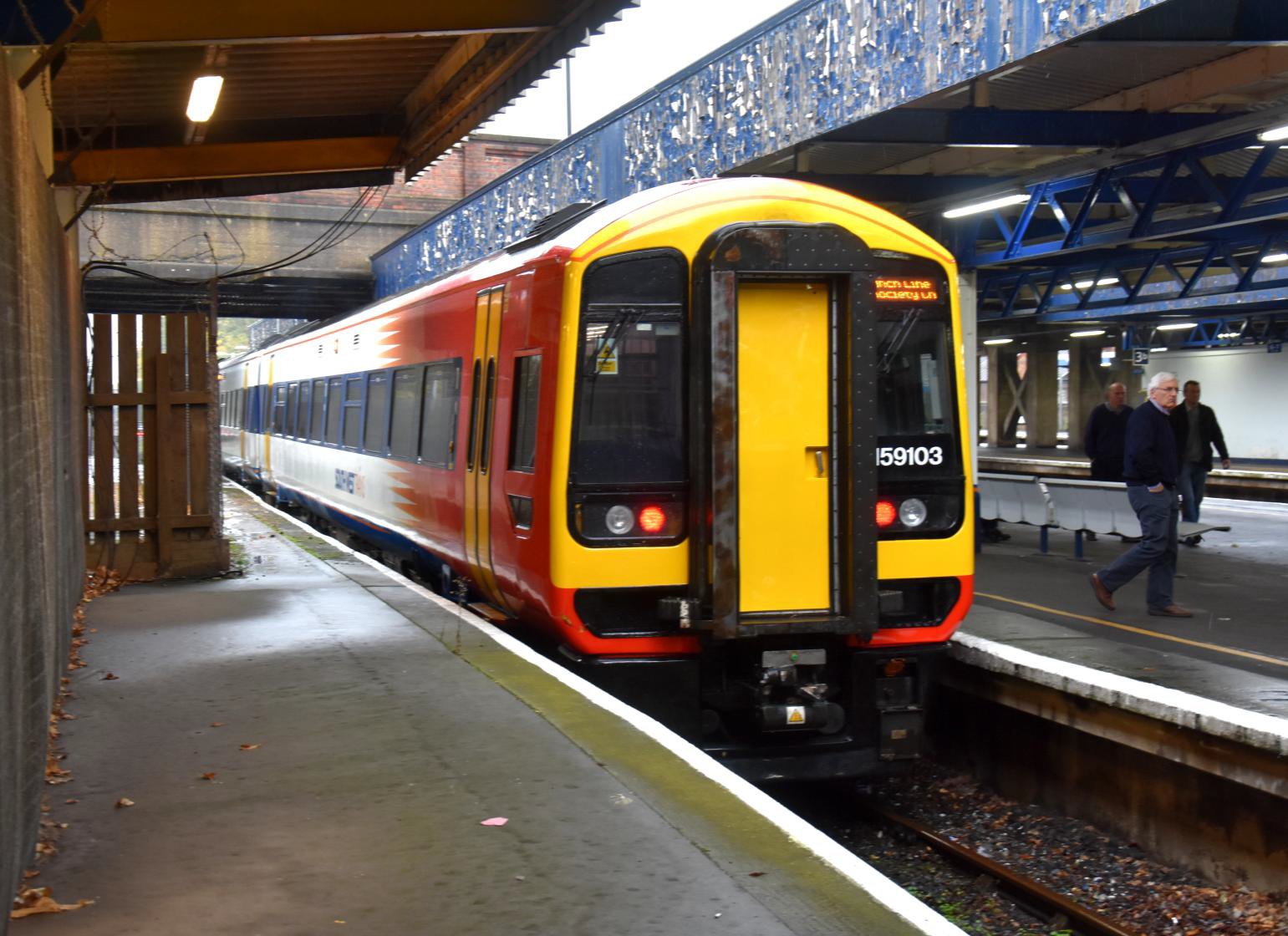 The former P5, now Southampton Central 'Down bay siding' (platform is to right of the train).
[© Phil Logie 2015]

Departing at 10.38 the train traversed the Down Bay Siding, Down goods loop extension, departure road and arrivals/departures line (all reversible and forming 2¾ miles of continuous rare track!). After passing the fuelling point and running behind the back of Redbridge P2, return to the Down main was at Redbridge Jn. Next at Totton East Jn it was on to the very rare (and normally rusty) 1,302ft Fawley branch/Totton Yard goods loop at 11.23 and back to the Down main at Totton Jn West. As the tour was some 15 minutes behind schedule we were unsure if it would be to be routed via the very rare, (for through trains), Brockenhurst P4 (the only section of track on the tour required by one member of note who happens to be an ex-SWT driver!) as it was occupied by a Lymington Pier service due to depart at 11.42. Approaching Brockenhurst the train was checked and shortly afterwards a cheer went up as the hoped for 'feathers' lit up left into P4, where a quick stop was made to replenish the stock of milk. Four pints of milk later it was off towards Branksome via the facing crossover at Brockenhurst Jn with a rejuvenated catering trolley that subsequently experienced renewed demand for hot drinks!

A remarkably swift reversal was made in Branksome P2, departing 12.11 and, for many, the highlight of the day, Bournemouth West. The depot approach involves right hand running (to reduce conflicts); both lines are unidirectional. Then along No6 road (the longest) and, as tradition seems to demand at depots, through a carriage washer. The train halted at 12.35 about 20yd from the buffers, which are just before what would have been Bournemouth West station's (CP 6 Sep 1965) throat. Thunderbird locos 73133 in green livery and 73235 in SWT livery were seen despite the damp conditions outside.

Leaving the depot area for Branksome and the West again involved right hand running taking the opposite line to the inward journey. Unfortunately, we were unable to traverse Poole sidings as they were occupied by ECS due to earlier overrunning engineering work delaying trains. Weymouth P2 was reached at 13.40. There was an option of an hour's break, or a 'pull over' to Jersey Sidings (should have been on Cardigan Bay!). Needless to say most remained on board to experience siding 1, reaching just short of the run round trailing points. Reversing it was back into Weymouth P2 for a short break. Restarting at 14.41, Yeovil was next for a speedy reversal at Pen Mill P1. Then ascending the reversible 'Pen Mill Single' spur and directly into Yeovil Junction Down loop siding (NR call it 'Heritage Platform'; the former P3) at 15.35; a slight change from the anticipated shunt, for a 65-minute break at Yeovil Railway Centre. Impressively, former Chairman Robert Green had come from Minehead to see us. 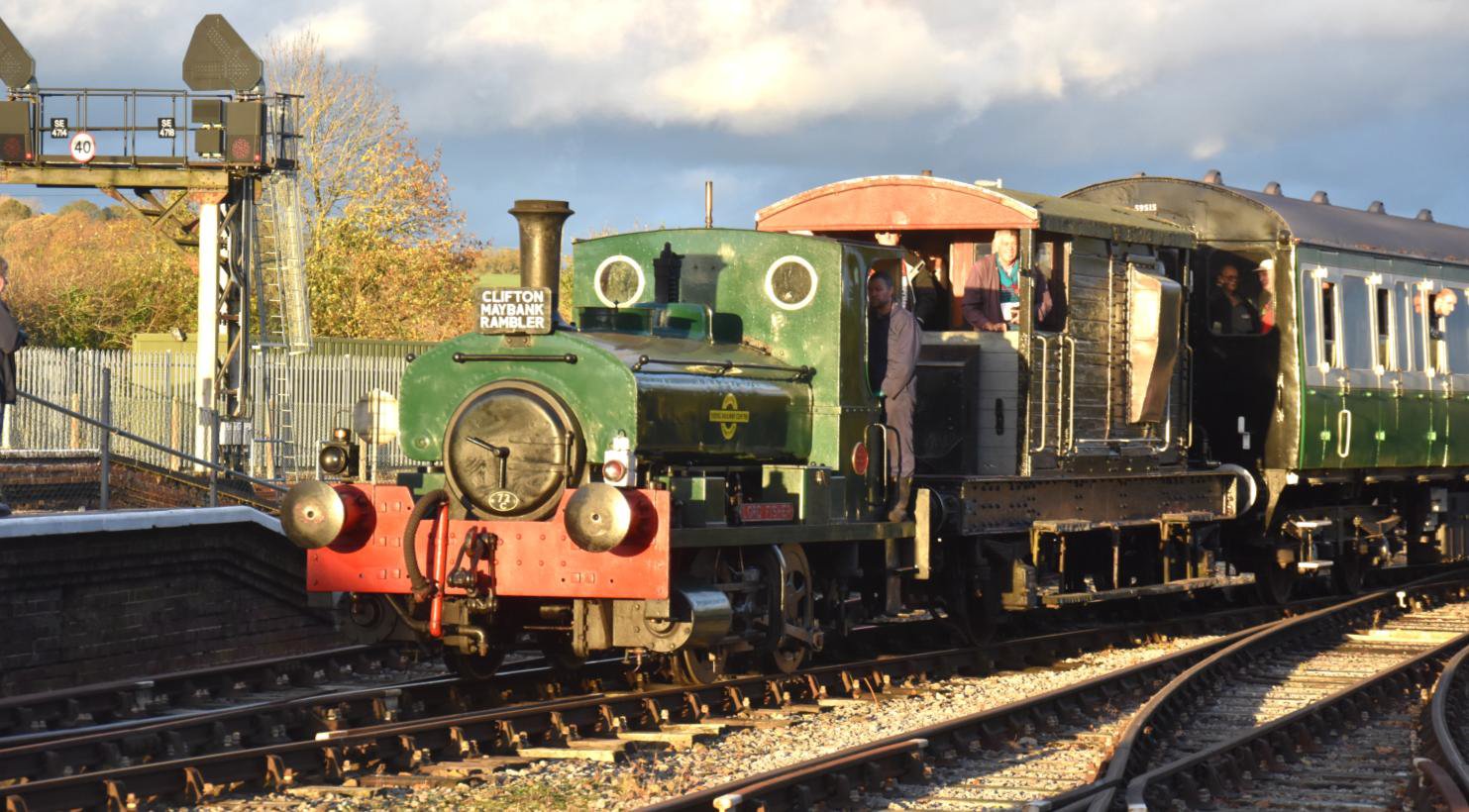 Prior to arrival here, those on each coach were advised to which of the three standard gauge rides they had been allocated. Your reporter was in the first group so made straight for the 'Clifton Maybank Rambler'. Andrew Barclay 0-4-0 steam engine 'Lord Fisher' was on the west end with War Department Brake Van 1018 (a Southern Railway design), DMU centre coach 59515, Great Western Toad 35923, and Fowler 0-4-0 diesel engine No44 'Cockney Rebel' on the east end. Once the whistle sounded, there was a surprise west departure, opposite to that expected, to the turntable which the leading loco crossed. Reversing, part of the ex-GWR Clifton Maybank Goods branch formation (CG 7 Jun 1937) was taken, beyond the normal passenger limit. With all three groups accommodated, there was time for a couple of bonus trips which some used to their full advantage, repositioning themselves to maximise the track in true BLS style! Elevated miniature railway rides, sales and refreshments were all available. A popular question in the café was 'What was in the bread rolls?' The answer was nothing, as they accompanied the soup! A most efficient and enjoyable perfect railtour break; plenty to see and do.

Departing at 16.40, very unusually Gillingham (as in 'Gill' not 'Jill') Down Loop was taken in the Up Direction and it was off to Salisbury (17.41) to visit the third traincare depot of the day. After waiting on the reception line, the tour took the Carriage Wash line (naturally) to virtually the end of headshunt (84m 35ch from Waterloo), on what had been part of the ex-GWR Salisbury to Westbury line until 29 Oct 1973, then Bristol trains were diverted over the LSWR route to Wilton via a BR connection there.

The return to Waterloo included, after Basingstoke P3, the second Up fast to Up slow connection, then staying on the slow until Brookwood where the fast was taken to set down at Woking P2. Beyond Byfleet & New Haw it was back to the Up slow, for P1 at both Surbiton and New Malden to Wimbledon P5. At 6m 73ch the Up fast was taken past Durnsford Road Staff Platform then, impressively, across twice to the Up slow for Clapham Junction P10 and Vauxhall P7. Finally, at Carlisle Lane Jn it was Up main fast to Down main fast and after over 330 miles into Waterloo P5 at 20.30 (booked 20.29).

This excellent day out raised a very impressive £17,315 for the RBF with ticket sales, raffle, sale of RBF items and catering. Thanks to all those in SWT, NR and the RBF who made this possible. Bill Bryson would be most impressed (next item) and we look forward to the forthcoming EMU tour. As a postscript, we are pleased to report an announcement on 18 January that Tim Shoveller (a railwayman for 25 years) has been promoted to the new role of Managing Director of Stagecoach Group's UK Rail division with effect from 1 February. This currently includes South West Trains, East Midlands Trains, Virgin Trains East Coast and the Supertram light rail network in Sheffield.