A good group of familiar BLS faces (31 participated) were gathered inside the railway's café; with greetings exchanged and souvenir tickets provided, a welcoming cup of complimentary very decent coffee was taken. The plan for our charter, on a day without public trains, was the eastern section in the morning, break for lunch and then the west end.

Morning Session: It was unusual for most participants to reach this railway by road or on foot rather than on a mainline railtour! On entering the Riverside station platform, via the interesting Museum, Railbus E79960, perfect in size for a BLS style railtour and with excellent visibility, (every railway should have one!) was waiting for us. No time was lost in opening the windows to prevent misting up. With passengers and staff aboard it was away off east down the single main line towards Strand Road, passing yacht boatyards, the Ribble Swing Bridge, Preston Dock (NB not 'Docks'), lock gates, the River Ribble and sundry road and foot crossings. The Swing Bridge is unusual in these risk averse times, being used by both vehicular traffic and the train service (not at the same time of course). Protected by trap points and sand drags at each end, it is staffed by a Ribble Railway signalman. To the left, in the direction of travel, the ship-free basin of the adjacent Dock was a substantial representation of former glory days. Sadly, now over it seems. Approaching the Strand Road area, the North Exchange Siding (actually the main passenger running line on the left of the three) was taken past the passenger platform followed by the short divergence into Strand Road LC Headshunt for buffer appreciation and reversal. A quick shunt back to the main line and then it was clip the trap points, plunger down, flashing red lights and barriers down for the road traffic. The 5mph Strand Road Level Crossing was covered to the gates protecting the NR boundary (0m 40ch) side of the road just before the PN116 signal post - the first time ever our driver had exercised his full running powers. A penny for the thoughts of, or mobile phone footage from, the waiting drivers as we promptly reversed back from whence we came. 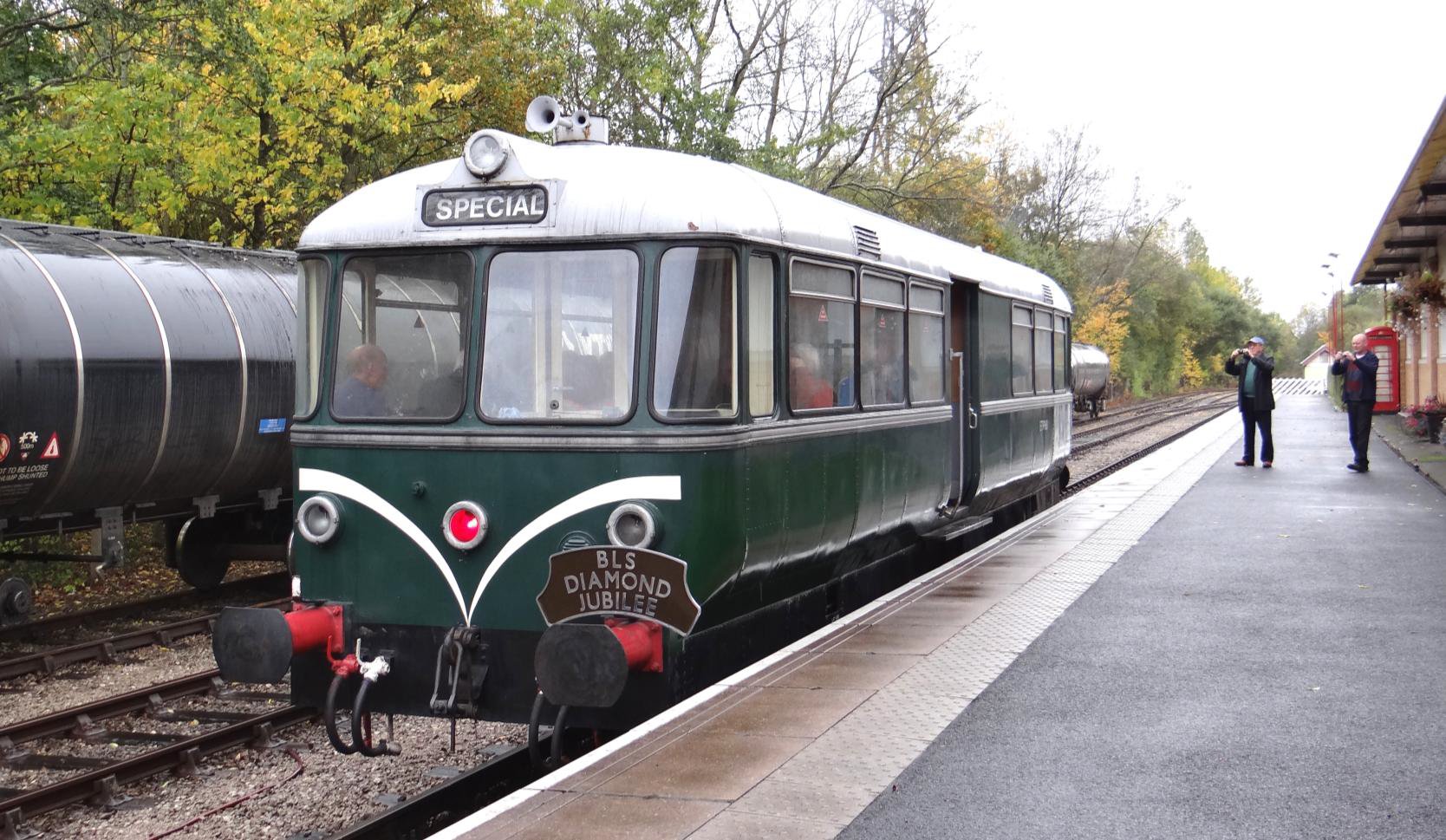 Railbus E79960 before the tour at Riverside station platform. The modern bitumen bogie tanks are in South Loop Siding; see below in the report.
[© Jenny Williamson 2015]

Now running back west, the South Exchange Siding was taken then the Platform Road again and back through the Centre Road (so the points would be trailing). Thanks very much, Strand Road Headshunt, Crossing and the three Exchange Sidings now completed. Returning to the main station area there was a brief pause before reversal onto the Lanfina Siding as far as the locked gates. Safety issues with passenger stock overhead clearance beyond the gates prevented further progress. Given the curvature of the siding it was not possible to confirm if any bitumen tanks were stabled inside. The siding belongs to Preston Council but is leased to the Ribble Railway then sub-leased to Lanfina who pay the Ribble an annual fee for use of the dockside track facilities. The terminal receives trains of bitumen from Immingham (Lindsey oil refinery) run by Colas once or twice a week usually, via Copy Pit. The terminal away to the north of the railway is not visible (good view available on Google). Bitumen is piped from the siding above Chain Caul Way to the terminal, implying it must be quite free flowing. There is a facility for warming the contents of the tank wagons when stabled in the siding.

Reversing from Lanfina Siding, the Loco Shed (North Road) was taken into the shed where the railbus normally stables. A line of Rolls-Royce diesel shunters receiving maintenance were on the opposite shed track. Another couple of reversals and it was back to the station; mission accomplished. As we were ahead of our lunch break slot, a guided visit to the shed was kindly provided to see an assortment of coaches and locos. Invited to step through a side door and into the paint shop, one of the former Dutch 'Class 08s' was viewed (in matt grey undercoat ready for a dark green livery finish). Presumably, it was No 663 as 601 in immaculate Dutch yellow and grey colours had been spotted earlier, inside the museum building. Stock list master spreadsheet (supplied electronically by the organiser as usual for all Society fixtures now) ticked off; it was time for a very enjoyable, filling and comprehensive lunch with a good menu choice and a further chance to socialise.


BELOW LEFT: Preston Dock, former exchange sidings on a brakevan trip, in the days when that was possible.
BELOW RIGHT: Strand Road LC; the BR boundary is by the signal. This trip working visited other choice Preston locations such as Deepdale Coal Depot.
[both © Ian Mortimer 8 Dec 1978]  ABOVE LEFT: The new layout on the BLS visit of 16 Nov 1987, Dock loco coming off the new Bitumen branch (the same as it is now).
ABOVE RIGHT: Three Dock locos at Strand Road level crossing. [both © Ian Mortimer 16 Nov 1987]

Afternoon Session: The weather had brightened up considerably as we set off eastward past the first set of platform points to reverse into the east end of South Loop siding where onward progress was halted by seven stabled bitumen bogie tanks. A double reversal and run through the platform Centre Road covered the track down to the Headshunt as far as two decrepit wooden wagons that blocked progress. Then it was back into the west end of the South Loop siding to rendezvous with the rear of the bitumen tank rake. A double shunt into the Centre Road positioned us for reversal, over the crossover to the main line and up to the gates protecting the lines into Preston Council's former Loco Shed at the western extremity of the site. Given the dumped stock and undergrowth, it was hard to tell if both lines to the shed building were still in situ, but the consensus from the passengers at that end of the Railbus seemed to be that they were. Reversing to pass the Museum Sidings, where all lines were fully occupied, the Unloading Line between the Museum and Loco Workshop buildings was taken. Progress was made up to the stabled vehicles blocking the rest of the line. The caseless body of shunter 08628 was visible at the end of the line, looking quite odd with the diesel engine fully exposed.

A quick reversal or three and all the available Loco Workshop roads were covered. Reading from north to south; Roads 1 and 2 up to the closed building doors, Road 4 up to a diesel shunter and a steam loco on test. Road 3 was completely blocked by a large crane and rusting steam boiler and was clearly to remain unavailable on the day. There is always something to look forward to next time! With the rare track riding completed, we shunted back to the station platform to terminate and heartily thanked the railway staff who had worked so hard to make our visit so successful and enjoyable.

The fixture concluded with a guided tour around the Loco Workshop, an impressive engineering operation. For a Saturday afternoon, there was plenty of activity and several rows of locomotives, carriages and other railway vehicles to check off against the stock list. In conclusion, another excellent BLS fixture with all available track covered, all sheds visited and much ground frame, point clipping, numerous reversals and trap point operations observed. The use of a railbus again provided a perspective of the railway infrastructure and associated operation that is not always recognised when travelling in conventional rolling stock.

Many thanks to our very hospitable hosts, especially Mike Bailey of the Ribble Railway and of course the tour organiser, our very own John Williamson.

Reproduced below is a track plan for our 1989 railtour of the (then quite different) Preston Dock railway.