35 participants gathered from about 08.00 at this station in autumn sunshine. Impressively, quite a few had participated in our HST special from Paddington to Buckfastleigh and Heathfield the previous day! Generous complimentary bacon rolls and tea or coffee was available in the excellent station refreshment room. This, complete with art deco interior, was moved here in 1986 from Maidstone, Palace Avenue, where it had been the Maidstone and District Motor Services' waiting room at reputedly Britain's first purpose built bus station. At 08.30 prompt, the 2-car Class 108 DMU (M50971 & M51571, both Derby built in 1959/60) departed. There was a driver each end for speedy reversals, in radio contact with each other as well as the person in charge and a point clipper, both on the ground. From Tenterden Town (OP 1903), the first move was to Rolvenden (OP 1900, originally 'Tenterden' and renamed in 1903 with the 1m 33ch extension up the steep gradient to 'Town'.) The tour continued with coverage of the recently laid tracks into the large and lengthy new carriage shed only completed in September. First, it was to the headshunt end of line. This required very careful driving, as the buffers are literally perched on the edge of a steep drop into a brook, and there is even a triangular road traffic type warning sign showing an engine falling down a quay! 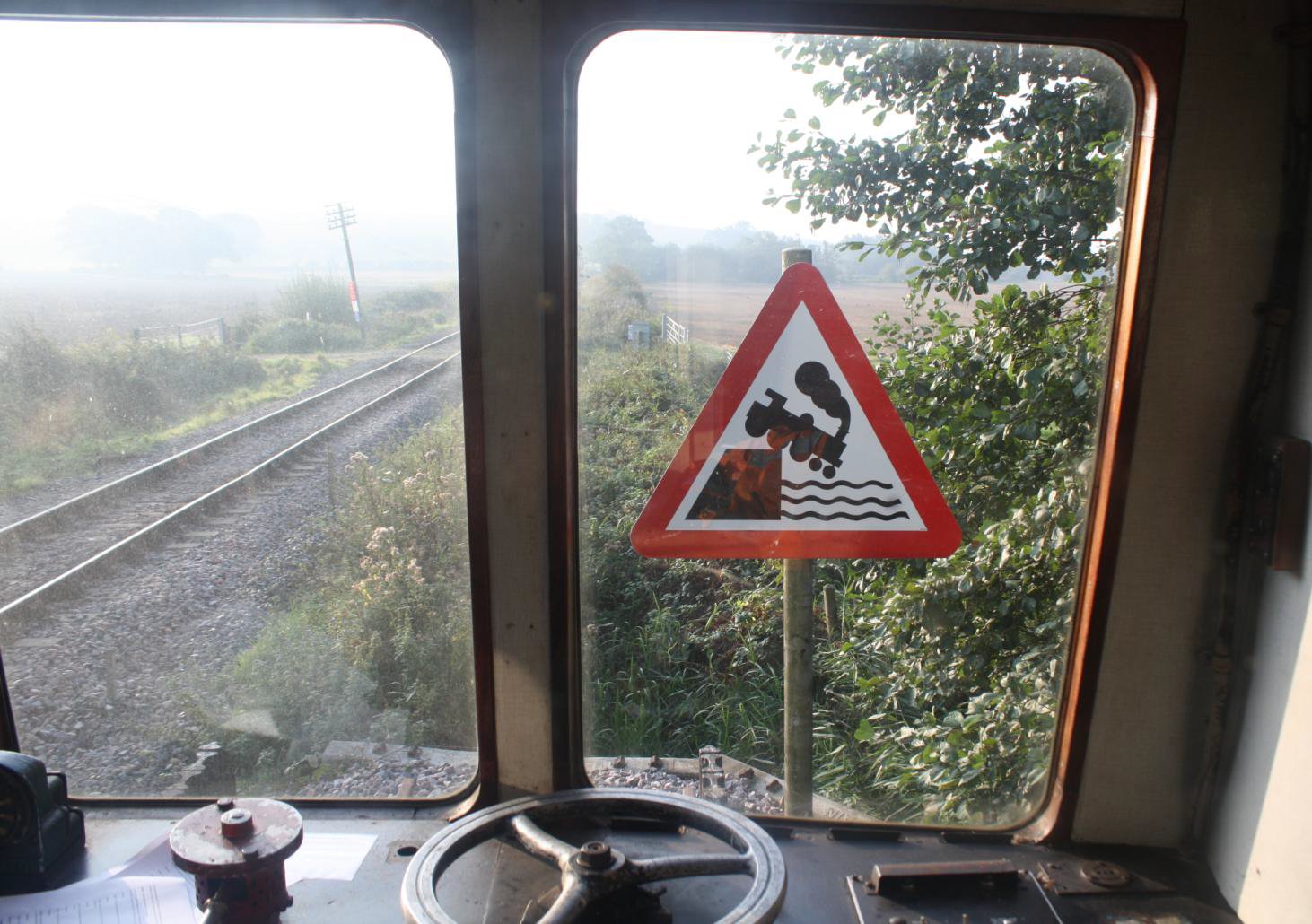 The DMU reaches the very end of the new Rolvenden Carriage Shed headshunt (station behind photographer). The sign is actually attached to the buffer stops! Left is the Kent and East Sussex Railway's line to Wittersham Road, and hopefully one day Robertsbridge.
[© Darren Garnon 2015]

After reversing, it was into the carriage shed (where three of the four lines were completely empty) to road 1 stops. This was a truly historic moment, the first passenger train to enter the shed (and a first for the crew). When it was 'officially opened' in September with a VIP audience they had to walk from Rolvenden station as the trackwork was incomplete. In fact, the Operations Department had only passed the track for trains to enter 48 hours before our tour! Two further reversals later, the tour covered road 4, to three stabled carriages, the only vehicles inside (but it will not remain so empty for long; therefore, such comprehensive coverage will be difficult in future). Then it was road 2 to the end of line. The shed appears to have the 'National Buffer Stops Collection', each road having a different design; one has three horizontal metal bars, another two, a third just one and the last is wooden! Finally, road 3 to the end enabling study of the carriages in road 4, including a LNWR 6-wheel Wolverton 1889 built inspection saloon. The train also covered the Carriage Shed headshunt loop (the front coach overlapping on the end of line) and very cleverly, all four variations of the double slip - no slipups on this trip. The new track is laid to a very high standard.

Things had gone so efficiently that we were 20 minutes early, so waited for the two service train steam locos to vacate the depot. Participants were entertained by No.30065 (US Army Corp of Engineers 1943 built and previously at Southampton Docks) and No.76 'Norwegian' (ex-Norwegian State Railway, built Nydquist and Holm 1919) being prepared and some shunting. Also seen in action was the unusual Metropolitan-Vickers Diesel Electric Bo-Bo loco 'Ford' (of 1932), formerly at the Dagenham car plant, which was taking tree felling equipment out along the line (and returned). When the locos had left for Tenterden, our DMU traversed loco shed road 1, to a small loco's length short of the doors and road 2, to stabled stock. The tiny headshunt to the platform south ramp was next (new for one driver who had only worked on the line since 1975!). Rolvenden crossovers were covered with a double reversal; then our tour was the first passenger train in over a year routed via the 'main' as service trains use the loop. 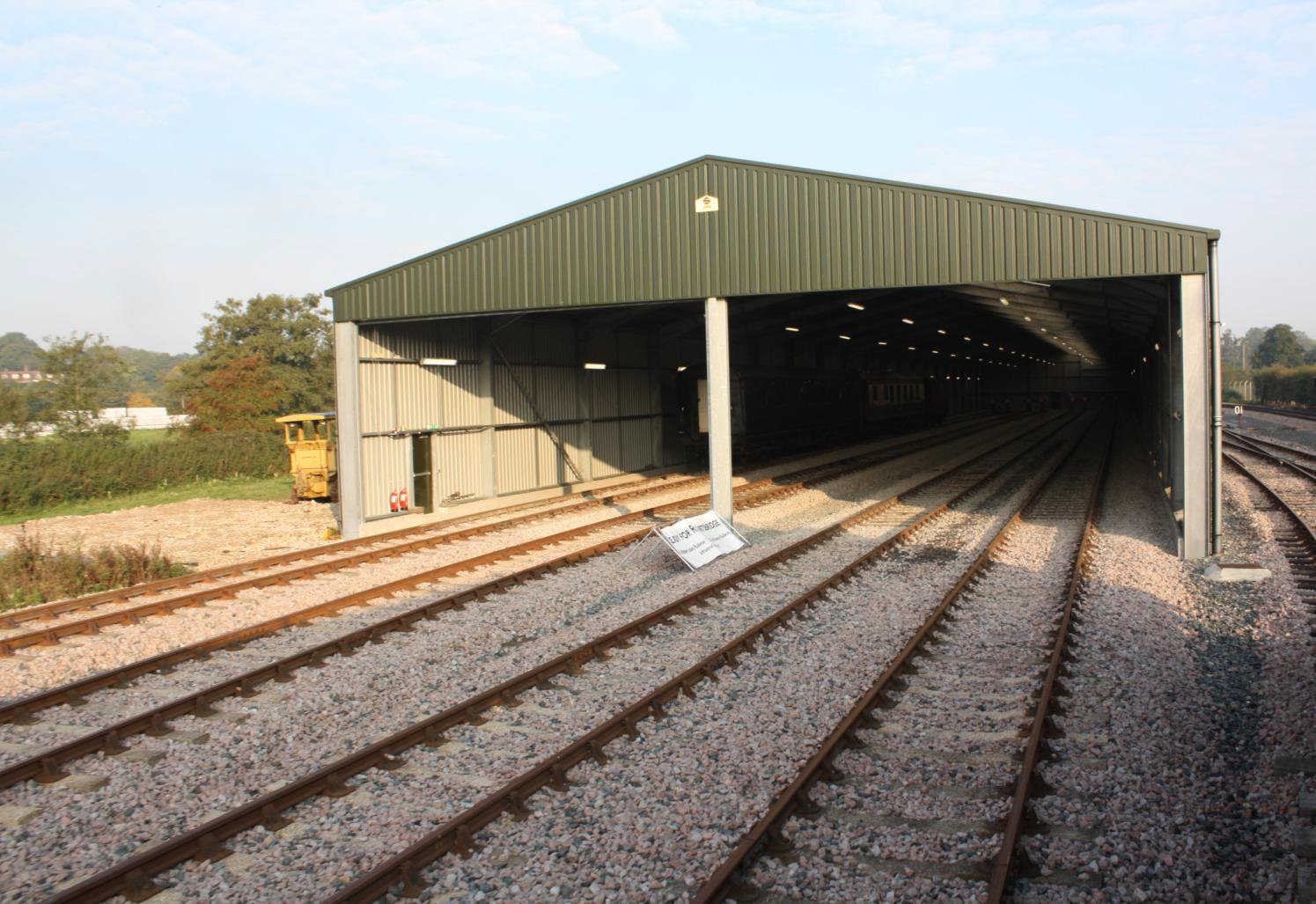 Virgin track! - The lengthy Rolvenden Carriage Shed Roads 4 (left) to 1. To the right is the new Carriage shed access road that leads onto the headshunt which has its own run round loop. The point is in the 'main line' which is not normally used by passenger trains now; they take the realigned 'loop' extreme right next to the green hedge. Both these lines are now reversible; previously they were unidirectional, as shown in TRACKmaps vol.5 p13A November 2008.
[© Darren Garnon 2015] 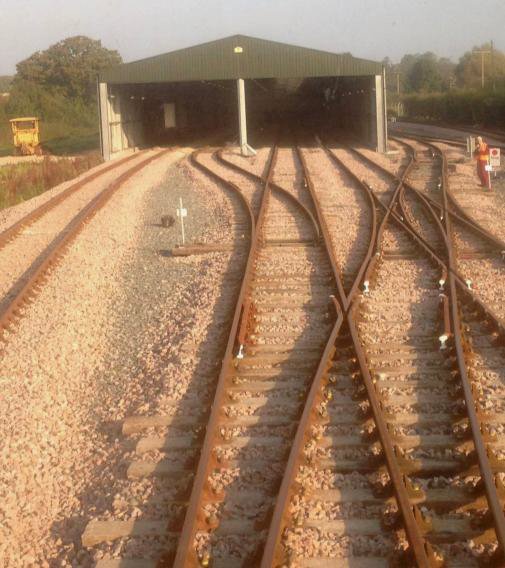 Detail of the connection from the K&ESR 'main line' via the double slip in front of the new Carriage Shed.
[© Darren Garnon 2015]

Back at Tenterden Town, the non-passenger run-round loop was taken, passing a service train in the platform to the considerable surprise of the 'normal' passengers, before reversing on the lengthy headshunt. It is in a cutting (unusual for a light railway), part of the original extension to Headcorn (OP 1905, CP/CA 1954). This traversal was abbreviated by the Pullman train stabled on the line. Next the 'Pullman Dock' buffer stops were visited, behind the platform into the car park (where there was a vintage car rally) at a distinctly higher level than the platform and running line.

The DMU waited here for the first service train to depart and then the Pullman train to move forward into the platform. The next reversal was at the headshunt stop board. To follow was carriage & wagon workshop road 1, to the doors; opened for participants to see class 14 D9504 and GWR railcar No20, under restoration. Two more reversals took the DMU to road 2, to stabled stock. Then the pièce de résistance; the very rarely authorised move to the headshunt derailer beyond the stop board at the buffers of a stabled Class 25.

The railtour finished half an hour early, testament to the railway and its staff, particularly the train guard and drivers, who worked very efficiently and enthusiastically to ensure as much track as possible in the time available. Many participants commented on what a friendly and welcoming railway this was. Grateful thanks to member Darren Garnon for his most enjoyable, superbly organised and executed first BLS fixture (known as 'Kev Adlam style!'), hopefully the first of many more to come.