Many of the participants from the morning's 'Tenterden Town Tracker', and a few others, made the relatively short journey to Hythe station (OP 16 July 1927); the only terminal station on the Romney Hythe and Dymchurch Railway (RH&DR), with its impressive overall roof, excellent facilities and interesting track. There was a strict party limit of 32, the maximum that could be shoehorned into two of the diminutive carriages on this 15" gauge line. Access to some lines would not have been possible with a longer train. 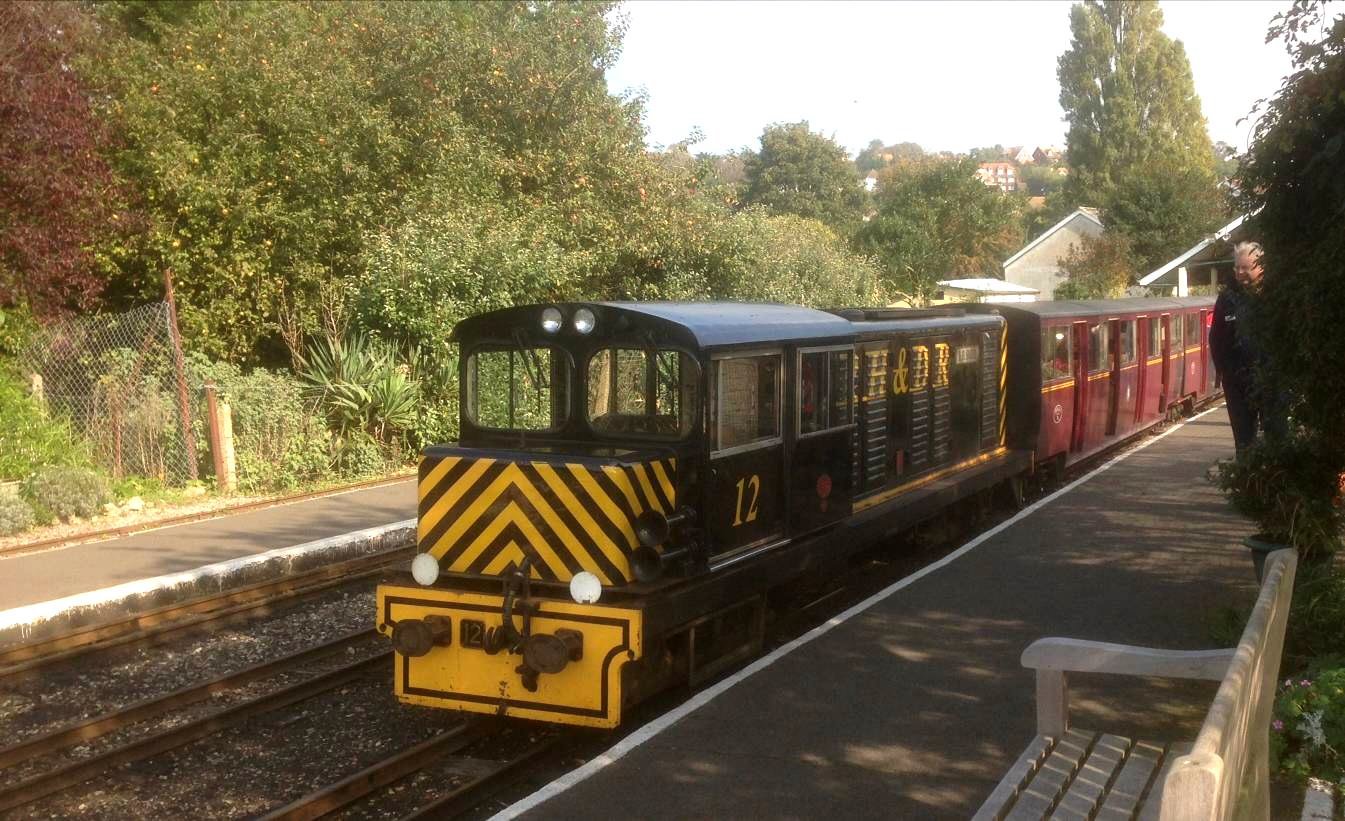 The two-coach BLS railtour waits in the afternoon sun on 11 October at the end of P3 at Hythe - the centre run round engine release road is behind and the very rare P1 far left.
[© Darren Garnon 2015]

Starting from P3, Diesel Hydraulic No.12 'J.B. Snell' propelled the tour back to the platform buffer stops. This is extremely rare, as during service, all trains stop well short to allow the locos to run round. The tour then moved forwards to clear the trailing crossover beyond the shed road. On arrival at Hythe our organiser had at first been told that his requests to traverse Hythe turntable and P1 had been declined and Dungeness non-passenger loop was only a 'possibility'. However, members were delighted (particularly those at the back) as the train promptly propelled over the turntable! After reversing it was into the non-passenger Hythe centre (run round) road, before a double reversal to take the crossovers adjacent to the shed and cover the full length of P2. Further reversals took the train over the other (facing) crossover back to the starting point on P3. A refreshment break was taken, using the excellent tearoom and member Jill Everitt magicked up some well travelled sausage rolls (from Devon on a green liveried HST the day before!) in aid of First Devon and Exeter Prostate Cancer Fund!

Refreshed and taller (legs stretched), participants re-boarded for the next stage, departing from the extremely rare P1. This had initially been declined as it is not signalled for passenger arrivals. However, a quick thinking member suggested the crew run the train to P1 during the break ECS and, eager to please, they did! The timing of our departure was crucial with single track crossing moves so that a non-stop run from Hythe to New Romney via the rare Dungeness inner loop was achieved (no mean feat with four trains out). Skilful driving was required by driver Steve to keep us 'non-stop', with speeds dipping at places for a slower than usual view of the very interesting and varied scenery. 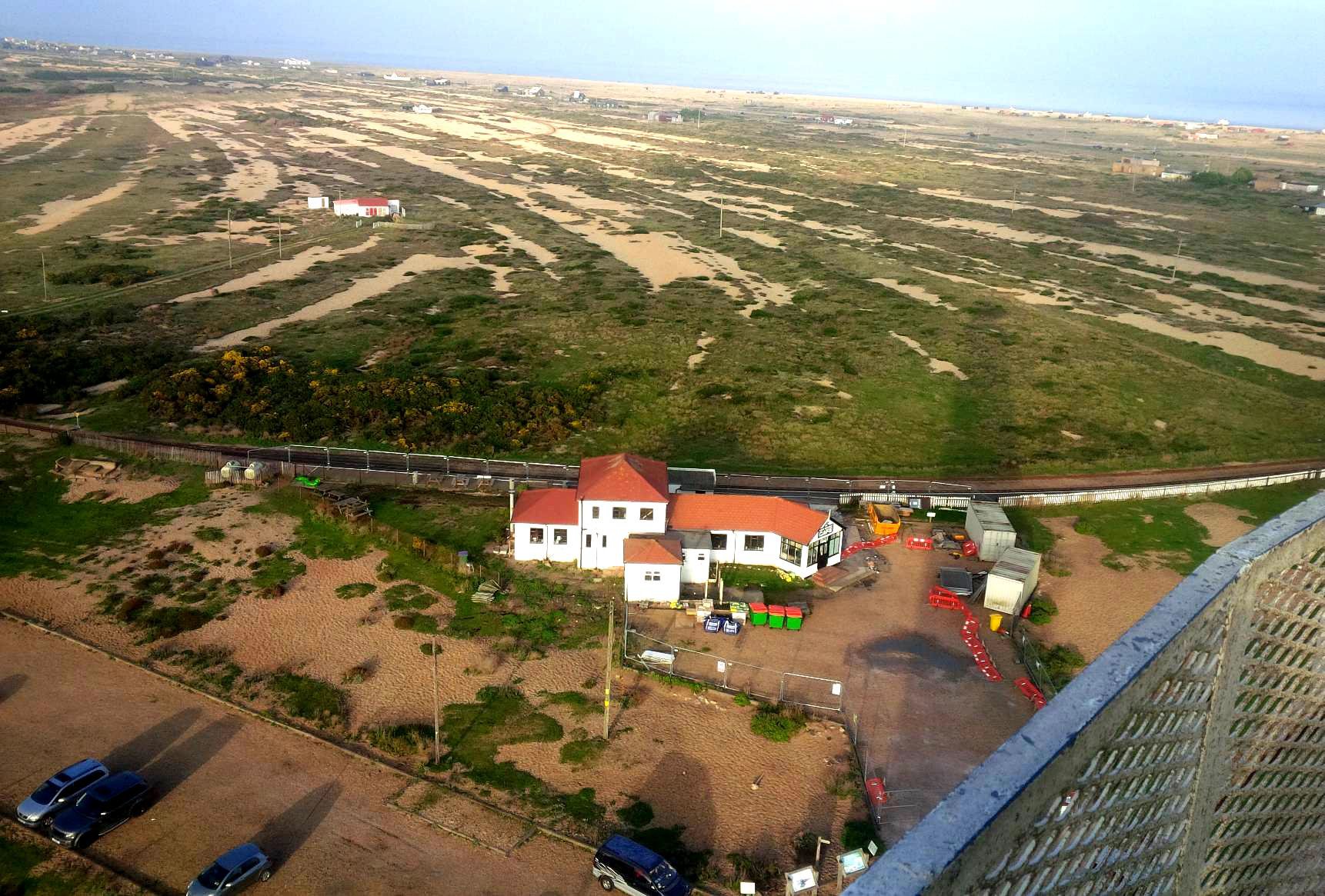 Dungeness (RH&DR) station and the large shingle beach behind from the 'new' lighthouse looking northeast. New Romney is along the coast top left.
[© John Cameron 31 October 2015]

We did manage two crossing moves non-stop and all trains were on time. Some participants had booked specifically in the hope that the inner, non-passenger, loop at Dungeness (station OP 1928) would be traversed. Breaths were therefore held as the tour approached the points, which were set 'right' and through the inner loop, much to the surprise of passengers waiting for the next service train on the platform (left)! The station was a building site (its facilities were being completely rebuilt), surrounded by temporary fencing. A member returned to the RH&DR on 31 October to do the normal platform line; the loop was very rusty even though a non-stop special had run through earlier that day! 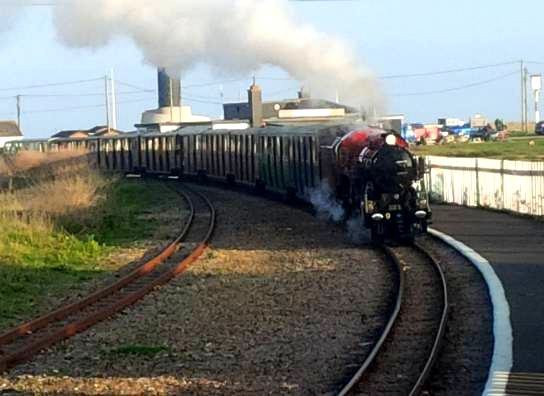 No.9, 'Winston Churchill' approaching Dungeness from New Romney looking southeast. The old lighthouse is in the background, left of centre partially obscured by smoke and the Britannia Inn is to its right. The very rare inner loop covered by our tour is on the left. The whole RH&DR was double track until the Second World War but, after repairs, New Romney to Dungeness was reopened in 1947 (by Laurel and Hardy https://youtu.be/85d2ocHNkg8 ) as single track.
[© John Cameron 31 October 2015]

On arrival back at New Romney (OP 16 July 1927 as a terminus until the 5½ mile Dungeness extension was built over the massive shingle bank, opened the following year), the train crossed to the reversible P2 for a (much needed) leg stretch and complimentary hot drink. The loco was changed to an unnamed and unnumbered 4-wheel 1938 built Diesel Mechanical (Motor Rail, works No7059), not normally used on passenger trains. Crossing back at the east end, the tour reversed on the main line to traverse nearly all of bay P4. Two more reversals took the tour into carriage siding 3, the furthest (north) from the main line before reversing again and travelling right through the works building, emerging on the other side to travel up to the doors of the PW Depot on the middle road of the three. From there the connection from the PW road to the main line was taken before reversing and running through P2 (again) to the west headshunt. The tour map showed two crossovers at New Romney between Up and Down Hastings as the lines are called and it became evident why the train kept using the same one - the further east crossover had gone! P1 was then covered and the connection taken into the Loco Works building to the end of the middle road. Most of the locos not operating on the day were seen stabled on either side as the train exited to travel over the turntable (the second of the day!) and to the end of turntable road 3. Next, the Loco Shed became the third building that the tour entered, reaching nearly the end of the middle road of the three. Further reversals allowed the train to reach the coal road buffer stops, in the car park! Unsurprisingly there was a pile of coal (left)…

Late Sunday afternoon autumn sun at New Romney 'Coal Road' buffer stops in the car park; it is hard to believe that 32 BLS-sized adults fitted into the 2 coaches!
[© Darren Garnon 2015]

The New Romney 'Coal Road' is also the headshunt for the Coach Works building. Here there was a photo stop before traversing Loco Works road 3 as far as possible. After this, it was the connection from P1 to the main line, to complete our very comprehensive New Romney coverage. Then there was a further break in P4 while the loco was changed to Diesel Hydraulic No14 'Captain Howey' for a spirited return to Hythe.

Thanks to the RH&DR team for really going the extra mile (or two) to ensure that our tour covered as much rare track as possible, which was thoroughly enjoyed by the participants, in the lovely autumn sunshine. Thanks and congratulations to Darren Garnon, who had spent a great deal of time and effort, including site visits, to arrange the day's two excellent visits. Both were exceptional, which is particularly creditable as they were his first Society visits. May there be many more to come!