It was shortly after 6am on Paddington's P3 and the first class coaches of a GWR HST set were being laid for full English breakfast. Not so unusual perhaps, but for two details. The first difference was clear for all to see. The train with power cars 43187 and 43188 was sporting the striking new immaculate 'GWR Green' livery; the only HST that will do so with the arrival of the IEP over the next couple of years. The purists might question whether it was an exact match to the 'Middle Chrome Green' and the 'Holly Green' that the 'other' GWR used between 1906 and 1947 on much of its locomotive fleet, but the livery looked superb nonetheless. Quite a few heads were turned during the nearly 468-mile total journey to admire it; the GWR rebranding from FGW had only begun on 20 September with its franchise extension. Inside was equally as smart with clean white light carriage interior walls, grey seats and smart green trim round the headrests. The second detail, breakfast, was being prepared, not for the regular GWML commuters, but for GWR's invited VIP guests. Along with 150 BLS members and others, they would be enjoying the 'First Devon and Exeter Explorer', an HST railtour to the South Devon Railway (SDR) and the mothballed Heathfield branch. This branch has had no booked traffic since the timber trains to Chirk were transferred to Exeter Riverside in April 2015, due to the difficulty they were having in running round at Newton Abbot with the high number of passenger trains there. Downloads of David Palmer's itinerary and Stephen Phillip's geographical tour map were sent out with e-BLN 1243.

The Society was honoured to be asked by GWR to assist in promoting and running this very unusual and (almost; more on this later) unique charity railtour in aid of the First Devon and Exeter Prostate Cancer Fund. The inspiration came from Geoff Fidler, an Exeter based GWR Area Operations Manager, and the aim was to raise £20k for a new portable scanner at Exmouth Hospital. It is an honour and testament to our Society's credibility in previously raising significant sums of money for charity and running similar trips that we were asked to take such a significant role in this tour.

Departure from Paddington was followed by an extremely spirited run to Reading and thereafter that had some on board questioning whether the power cars had been 'modified' for the occasion! If Sir Kenneth Grange, who was responsible for the aerodynamic design of the iconic HST power car and who was one of GWR's guests on board, had a view on this, he was keeping it to himself. Pick up calls (with early arrivals) were made at Didcot and Swindon, then the tour ran via Bath, relatively unfamiliar lines to some on board. The tour was then routed via P5 at Bristol Temple Meads rather than the higher numbered platforms usually frequented by services from London, so covering two crossovers and the chord that connects the Up main and the Down fast. Our Fixtures Secretary, who had requested such novel pathing, was waiting to join the train (a 4am start from Crewe) and could only watch the train weave across the junction rather than benefit from his handiwork. By now, some very lucky members had paid for an upgrade to first class and were enjoying the Travelling Chef's full English breakfast in the leather seat luxury of GWR's premier HST unit. It progressed on time to the last pick-ups at Taunton and Exeter St. David's; at the latter as booked in P6 the furthest west, unusual for through Down services (conflicts with Up trains); certainly some required both of the crossovers.

After a slightly late departure from Exeter, awaiting a late running Up service, the train was soon heading alongside the lovely Dawlish sea wall in sunshine and on to Newton Abbot. Here it was looped into P1 (giving another crossover on departure) and unexpectedly held. It didn't take long for news to filter through that a DMU had failed at Totnes. As the HST was booked to run a mini-tour from the SDR to Heathfield and back for locals, timings were very tight and any delay may have jeopardised this for the 155 guests waiting at Buckfastleigh. Fortune was on our side and NR allowed us to proceed over Dainton bank to Totnes. The misbehaving unit was now in the Down passenger (P1) loop and the tour made the booked rare crossing at Totnes East (MP 222.33) to the Up line and into P2 to reverse. Interestingly this was a fully signalled move with illuminated feathers rather than on 'cats eyes'.

Then for many the highlight of the trip, the now exceptionally rare connection from NR to the South Devon Railway (SDR), which the tour would actually cover four times this day. At Totnes P2 the platform staff worked hard to prevent would-be passengers for destinations other than Buckfastleigh from boarding the train. The signal cleared revealing the route setting as 'DV', reflecting the line's identity until 1992 'Dart Valley Railway'. Our HST became a 'SST' and made its way cautiously over the normally very rusty SDR connection, watched by many congregated on Totnes Littlehempston station, and indeed at every crossing and vantage point along the line. See https://goo.gl/WUBfEs for a video clip.

In fact this was not quite unique but certainly only the second HST (but the first with MTU engines) onto the SDR. The first happened 18 years previously on 26 April 1997 when Hertfordshire Railtours ran their 'Teign & Dart' tour that covered exactly the same routing as this train. Progress down the line to Buckfastleigh was predictably sedate with the train limited to a maximum speed of 25mph and passing a service train that had been looped at Bishops Bridge. Despite the earlier delays, arrival at the terminus was almost on time, with the leading HST power car progressing well beyond the level crossing (new track for many; the line takes a curve right here off the old formation to Ashburton, due to the A38 road) to accommodate the coaches in the platform and clear the starting signal for return. 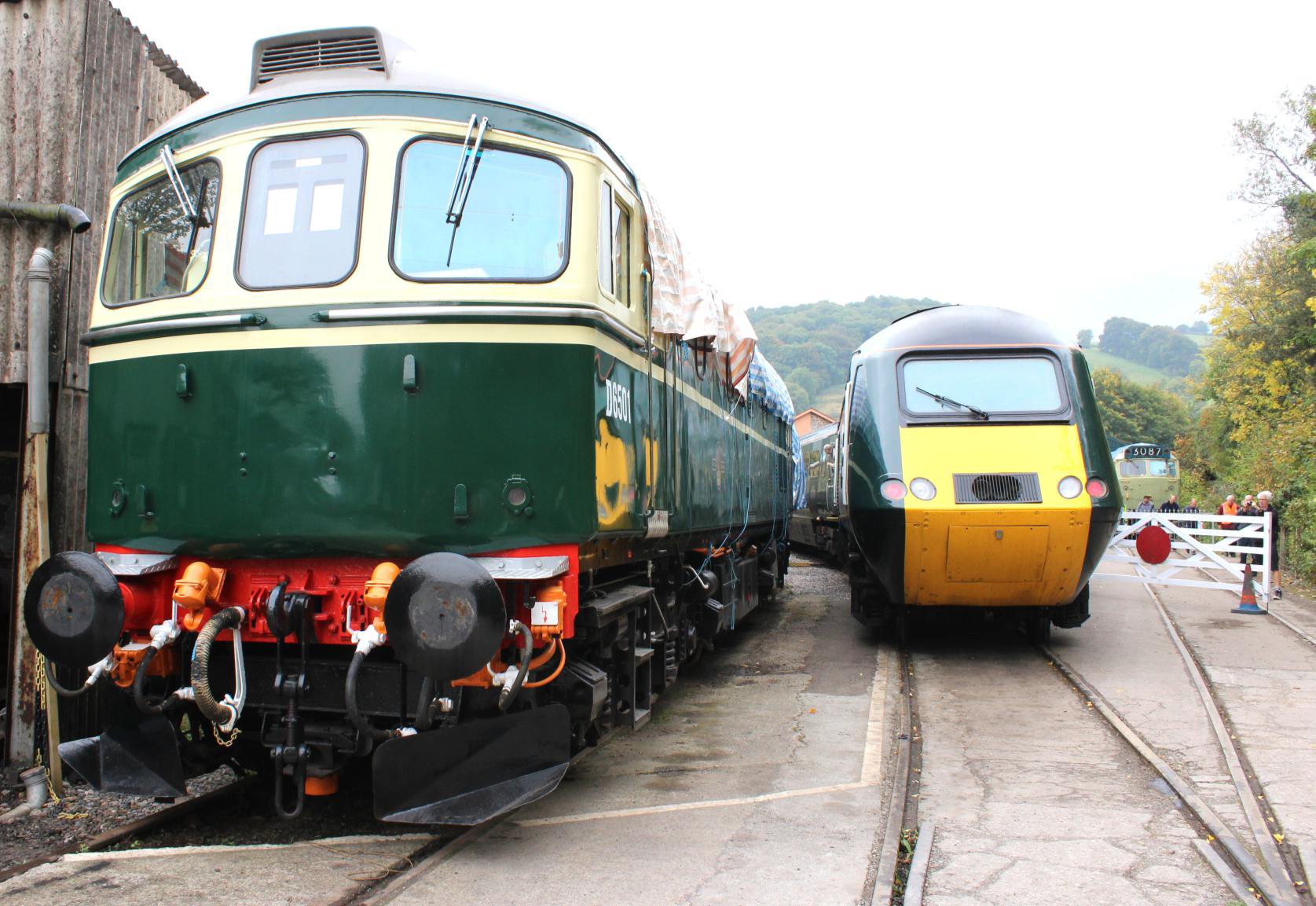 The tour beyond the passenger platform at Buckfastleigh, looking south, the building left of the green Class 33 (33002) or D6501 is the South Devon Railway's Works.
[© David Irvine 2015]

In about 10 minutes the train was retracing its steps to Totnes, now with the 155 new (and a few who had remained) passengers on board each paying £25 to take a lunchtime return trip to Heathfield. Meanwhile participants off the main tour could enjoy Buckfastleigh or try the South Devon Railway's scheduled services with steam locomotives 3205 and 6412. Buckfastleigh miniature railway was running and 'behind the scenes' shed and works visits were available for tour participants, as was a vintage Routemaster bus trip. Most of this was laid on specially - very well done! 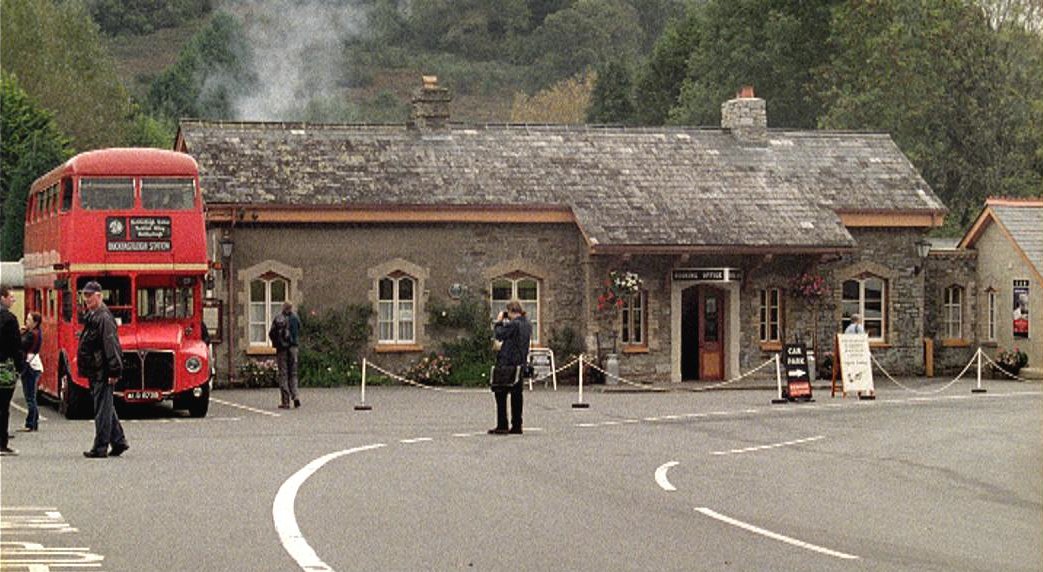 The Routemaster outside the delightful station at Buckfastleigh.

Three hours later all of the original passengers reboarded for their own trip back to Totnes and beyond, alongside the lovely River Dart in the superb Devon scenery. During this trip, Sir Kenneth made his way down the train signing autographs. Such was his popularity that his passage through the train took well over an hour! As on the outward trip, photographers were in abundance especially when the tour ran back over the SDR connection onto NR. Leaving Totnes to a fanfare of locomotive horns, the HST soon arrived at Newton Abbot and ran onto the Heathfield branch. Again the train progressed sedately as many observers came out to wave along this attractive branch that partly runs by a disused canal. At Heathfield, the crew pleased those on board by reaching inches short of the buffer stops, reached via the northwest side of the loop. 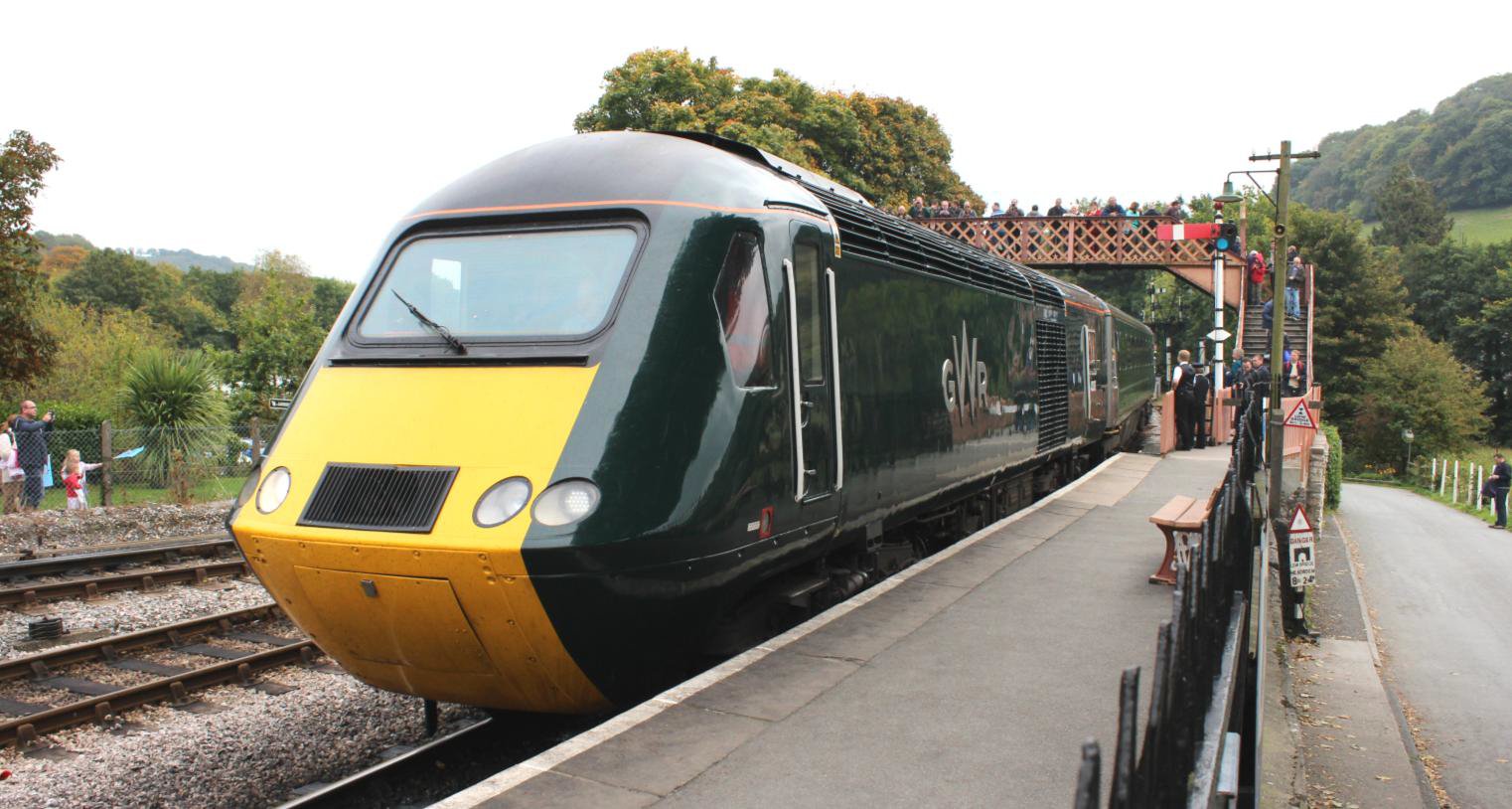 The very smart HST arriving back at Buckfastleigh after the Heathfield 'mini trip' for locals.
[© David Irvine 2015]

All that was left now was the return to London. The fund raising had not quite finished though, and the very generous tour passengers ensured that all of the remaining stock of food and real ale from the Travelling Chef was either consumed or purchased to take away, including 30 well travelled pasties for the next day's Society Kent fixtures (BLN 1245.2081). An on time arrival back into London Paddington P2 marked the end of a hugely successful and enjoyable day. The amazing collaboration between GWR, NR, the SDR, the Devon Diesel Society and our Society raised a staggering £18,215 towards the new prostate cancer scanner and £2,000 for the South Devon Railway Trust. 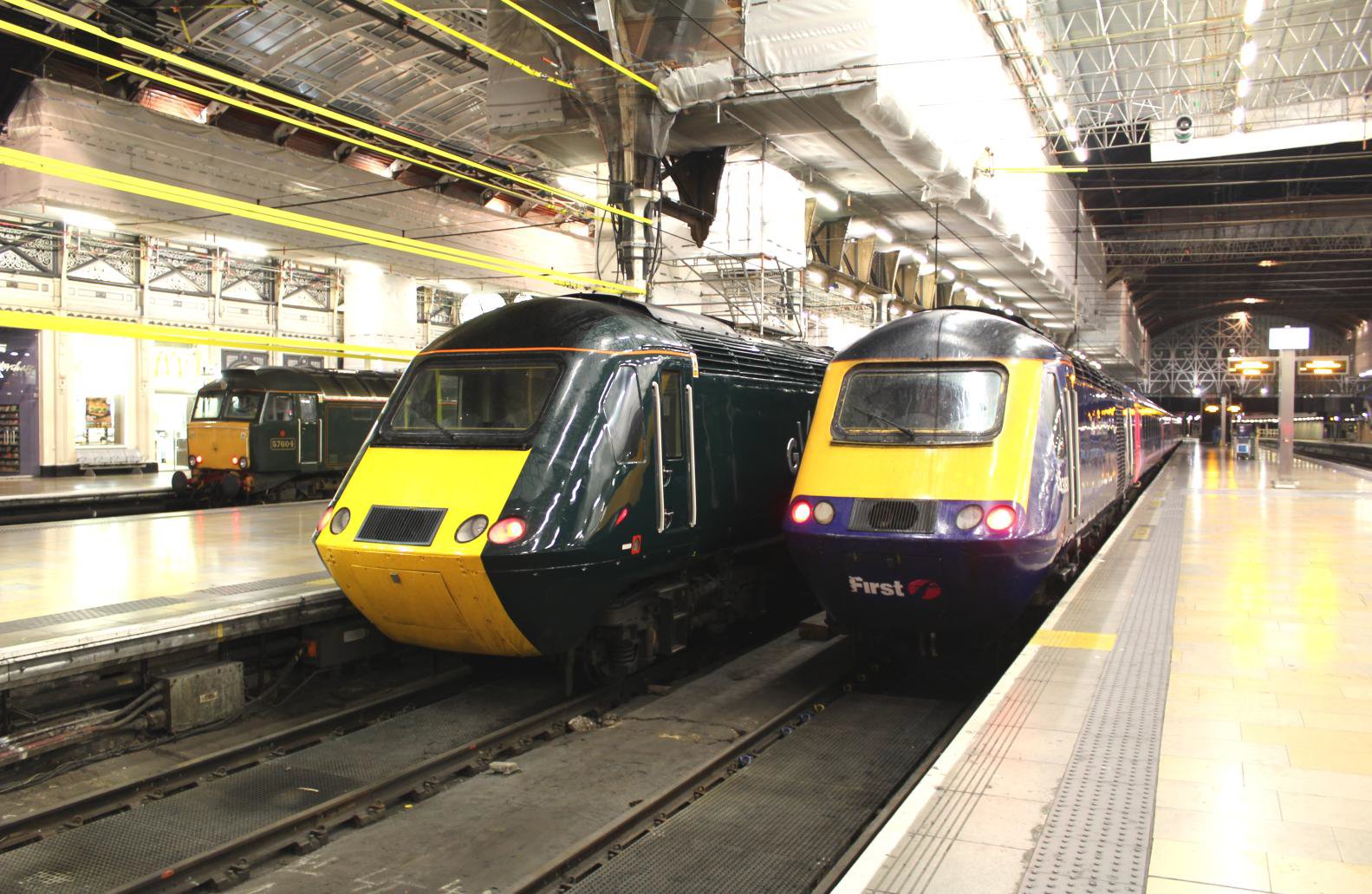 Line up at London Paddington in the evening after the tour.
[© David Irvine 2015]