(1) Crewe & Weston Miniature Railway: Thanks to the operator, Martin Green, 17 Society members visited this unusual 9½" gauge railway that has been here for about 20 years. In the last couple of years it has been extended to Oak Tree Halt along the tree line adjacent to the A500. Open for the occasional church fete, this section is not often used, to keep the ride simple and avoid point changing when the public are queuing. The line has recent motive power but coaches that date back to the British Empire Exhibition of 1924! Our host, ably assisted by his son as roving pointsman, had already plotted out an efficient and thorough plan to traverse every piece of the three legged layout and the three shed/yard roads. It was executed five times carrying four at a time. The owners of the house and grounds also kindly provided the party with tea, coffee and scones. A donation was made to church funds in appreciation of the facilities provided. 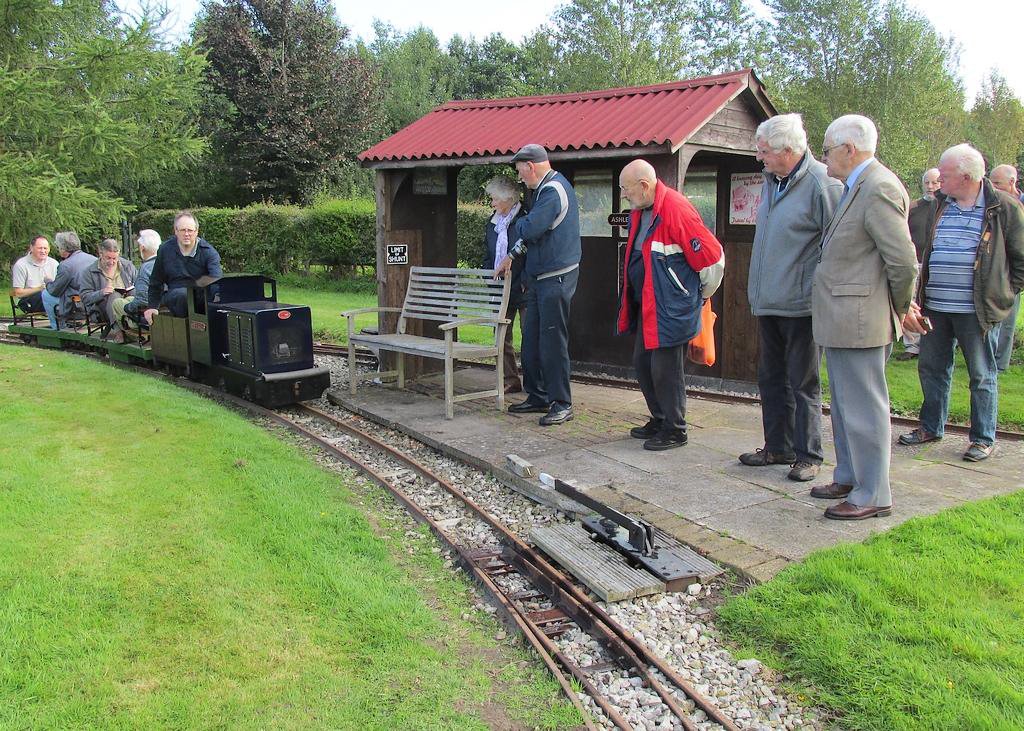 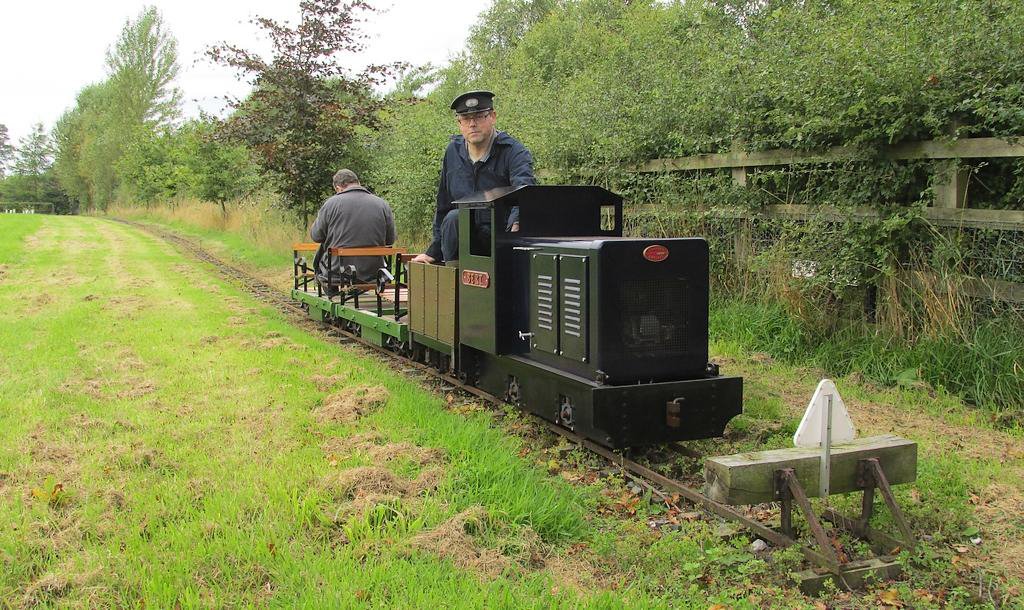 (2) Sandiway Miniature Railway, Cheshire Model Engineers: (MR p13) (BLNs 183.MR77 & 1209.MR69) Some 10 participants informally visited this 5"/7¼" gauge line, en route to (3) Penrhyn Quarry, for an anticipated 'quick visit'. They were made most welcome but the loco, 'Rusty', was making an unhealthy knocking sound needing investigation. A tray of teas appeared; then, while the bonnet was removed, it was enquired if we could 'just trundle up the shed branch' using a spare coach. This was happily agreed to; so 'people power' was used over the next half hour to traverse every shed road including the loading line. By then 'Rusty' was revived and the operators wanted their coach back, although the train did make one or two tours with a single coach before ours was ready to return to mainline service. A full traversal of the circuit and new platform loop was achieved, so after 90 minutes the 'quick visit' ended with a suitable donation and a promise to be back next year when more track should be laid. 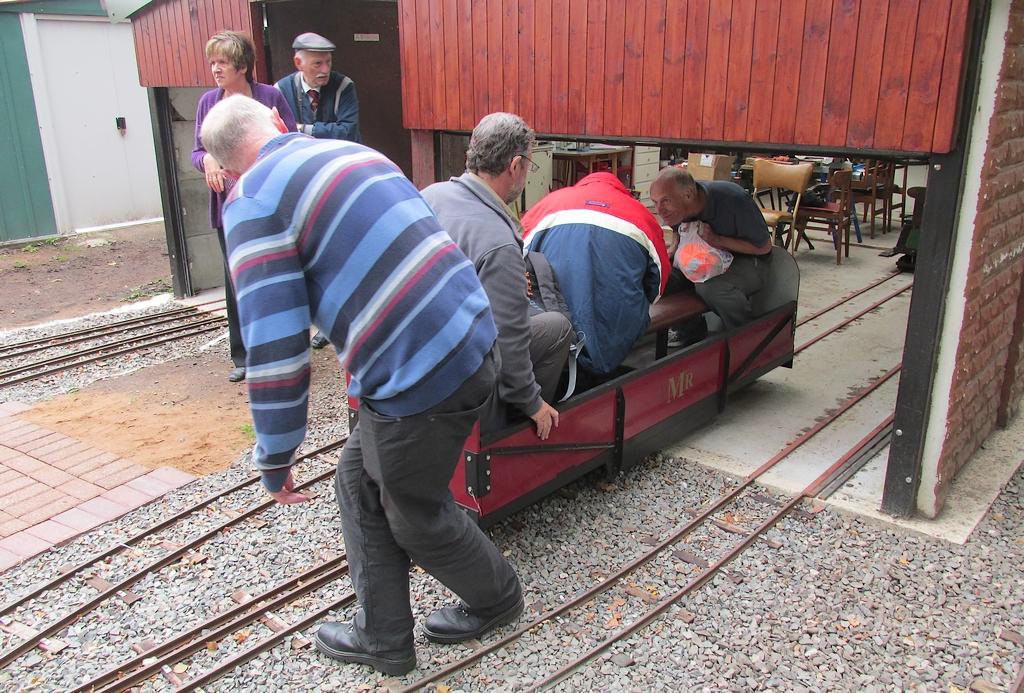 (4) Rhyl Miniature Railway, (Rheilffordd Fach y Rhyl) 'Rhyl Rambler': (MR p29) (BLN 1186.MR106) After visiting Penhryn (see MR 168 later), nine of the initial party of 20 [no staying power - Ed!] were left to make a specially arranged visit to Britain's oldest miniature railway, opened in 1911 [and your Editor's first miniature in 1959]. It has run ever since at the same location, with a hiatus from 1969 to 1978, is 15" gauge and clearly visible from the North Wales Coast mainline. The visit was courtesy of the Chief Operating Officer, and fellow BLS member, Simon Townsend (who therefore needed no briefing as to our 'requirements'!). The group convened at 17.00, after public running and about an hour later than planned, due to earlier events and traffic issues. Swiftly climbing aboard a two coach rake behind 'Joan', the original 1920 4-4-2 built by Albert Barnes and Co, eventually numbered 6 examples. Setting off from the usual platform inside the 2007 built station, the train drew forward to propel back along the centre road, and then reverse along the workshop branch practically to the doors. For this manoeuvre Simon (T.) himself laid on the ground and kept the point lever hard over with one foot! We then reversed out and took what for many was the highlight, the station by-pass line on the sea side of the main station shed. This had just had its occupying stock cleared to the centre road by 'Clara' of 1961 vintage which originally ran at Dudley Zoo. Sweeping past the outside of the station was most novel and a complete one mile loop of the lake ensued finishing up in the station before a short shunt to be sure everyone had overlap. Despite keeping the whole staff here two hours beyond their normal time, Simon was very happy to show us around the workshop and illustrate their latest project. Everyone at the Rhyl Miniature was thanked for their patience, the excellent and efficient operation.

These Kentrail Enthusiast Group visits were kindly arranged by our member, Simon Mortimer, but unfortunately were too short notice to be advertised in BLN. However, the 575 people who receive 'Branch Line' emails were notified in advance, on 10 September. Similarly, all those who take 'Branch Line' were able to find out, on 22 September, details of the short notice (turn up on the day) free public steam brakevan rides on the Barrington branch during the morning of Saturday 26 September. A good number of our members were present as a result. To subscribe free, email (available to nonmembers too) branchline-subscribe@yahoogroups.co.uk from the address you wish to receive it.