Day 1, Strathspey Railway, Fri 4 Sep:Participants reported by 12.30 to the Strathspey Railway platform (P3) of the very attractive and smart Aviemore (joint?) station at the start of our Scottish 'Track and Traction' weekend with PLEG. Commendably some travelled all weekend by train and bus although your Editor confesses to driving 1,150 miles. Some had not visited this delightful line before (does that mean the whole day counted as only one new piece of track?) and nearly everyone needed the extension. Therefore, it was great to start with a full 10m 26ch run, on which bacon butties and hot drinks were available; to be the first passenger carrying train since BR days to run on to the reinstated River Dulnain bridge. 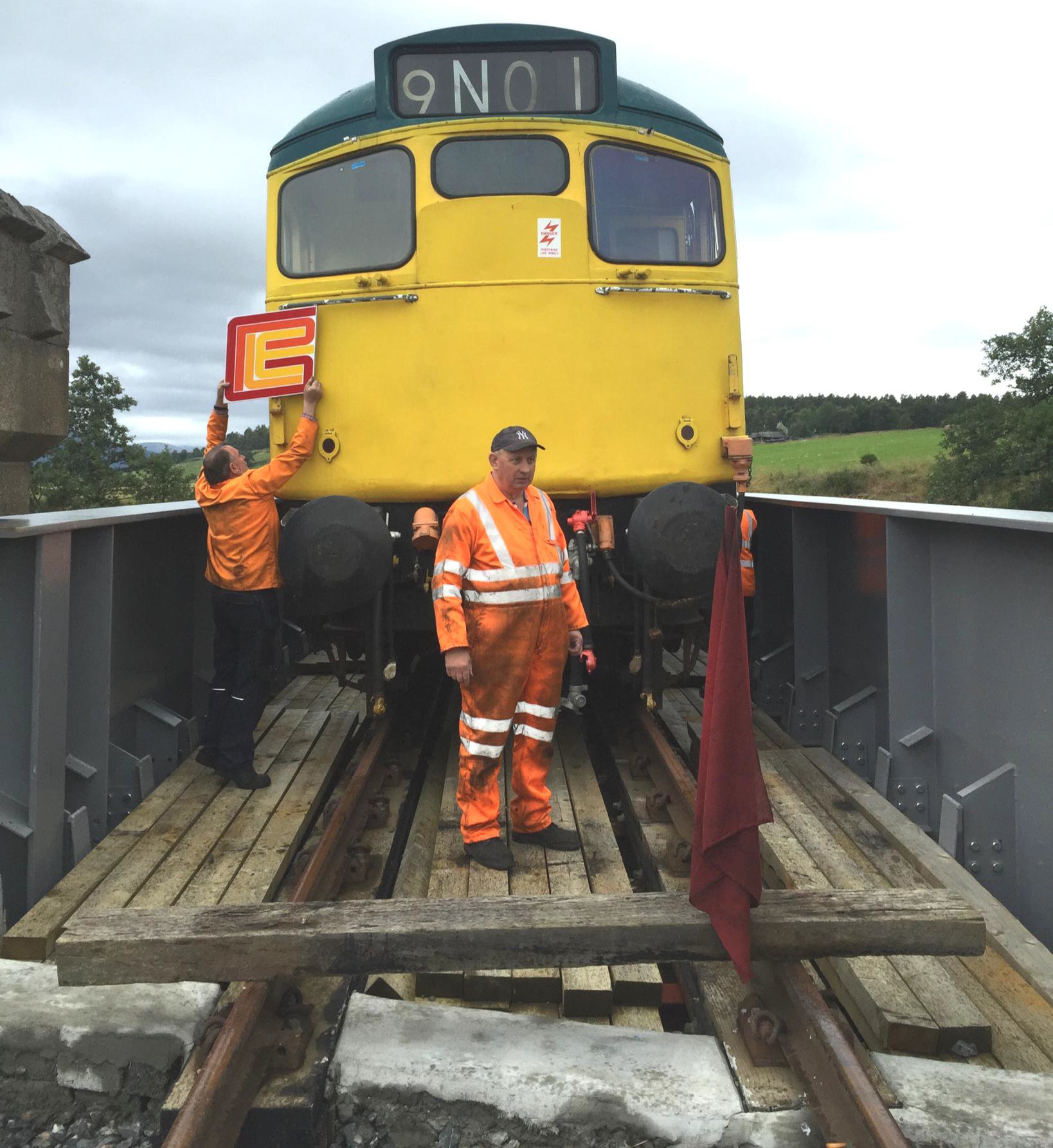 27050 hauled our tour onto the new River Dulnain bridge, the first passenger train on it since BR days, note the pristine metalwork (bridge!).
Looking towards Aviemore from east side.
[© Kev Adlam 2015] 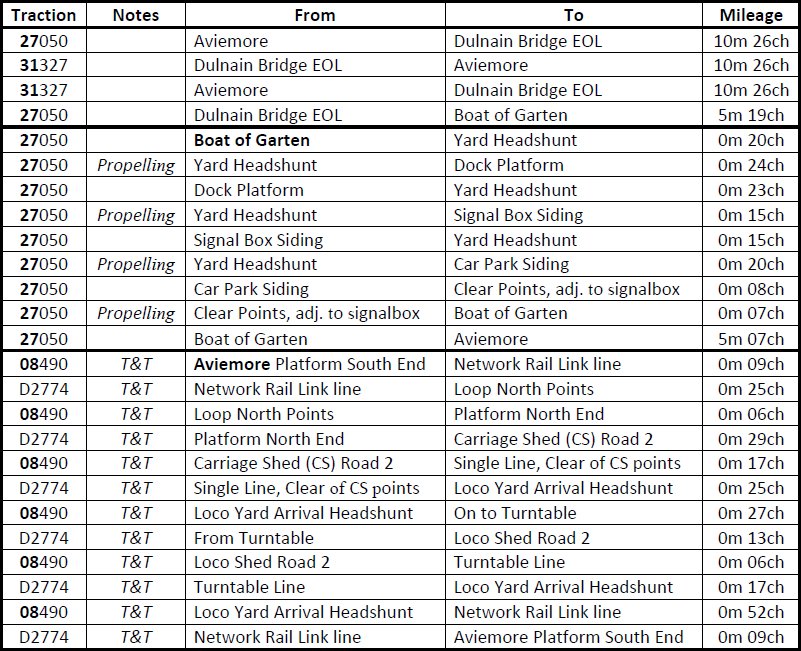 Thanks to Jim Sellens for the track and traction (some believed not to have worked passenger trains) summaries.

Coaches were used as preferred by some (and it was a long visit). After a few full length runs to familiarise participants with this lovely railway, and build up some mileage for the haulage fraternity, a mini tour was undertaken at Boat of Garten. The ends of lines were reached in all cases except the siding adjacent to the south signal box which had an immovable item at its extremity. This signalbox has an interesting Strathspey designed periscope mirror arrangement, which greatly improves visibility to the north. The car park (transhipment) siding was particularly choice. Back at Aviemore it had been intended to run two track tours but, with time being tight, incredibly all those who wanted the track fitted (just about, the Guinness Book of Records are looking into it) into the single TSO. Those just wanting the haulage were satisfied by a local station run (a Kev Adlam masterstroke). It was very good to have such comprehensive coverage because the layout is due to change soon with the creation of a new passing loop on the site of the original Aviemore (Speyside) station just north of the 'joint' station to increase line capacity for galas and specials. It was excellent to run on to the turntable and particularly poignant to reach the end of the middle of the three roads in 'The Roy Hamilton Carriage Shed' which has a very suitable external nameboard in memory of the great man and BLS icon. For details, pictures and a red-penned map see http://goo.gl/ZhQhlT on the PLEG website. This superb event (like the others this weekend) was the epitome of what can be achieved by collaborative working; great track and traction attracting 129 participants to a relatively remote and little visited railway on a weekday. A very good financial result to support the very friendly and accommodating Strathspey Railway too. Thanks to Ian Loveday for the arrangements here which worked very well.

Day 2, The Caledonian Railway, Sat 5 Sep: 130 people starting early or late according to where they had come from, converged on the lovely market town (once traditionally a city) of Brechin in Angus for 10.30. For many it was their first visit in preservation and reminiscences were exchanged about previous BR days' railtours and brakevan trips (CA 4 May 1981). As well as both platforms at each station, most of the rare engine shed branch was covered at Brechin. See http://goo.gl/UjEmr5 also. There was much of interest to see and refreshments were available. 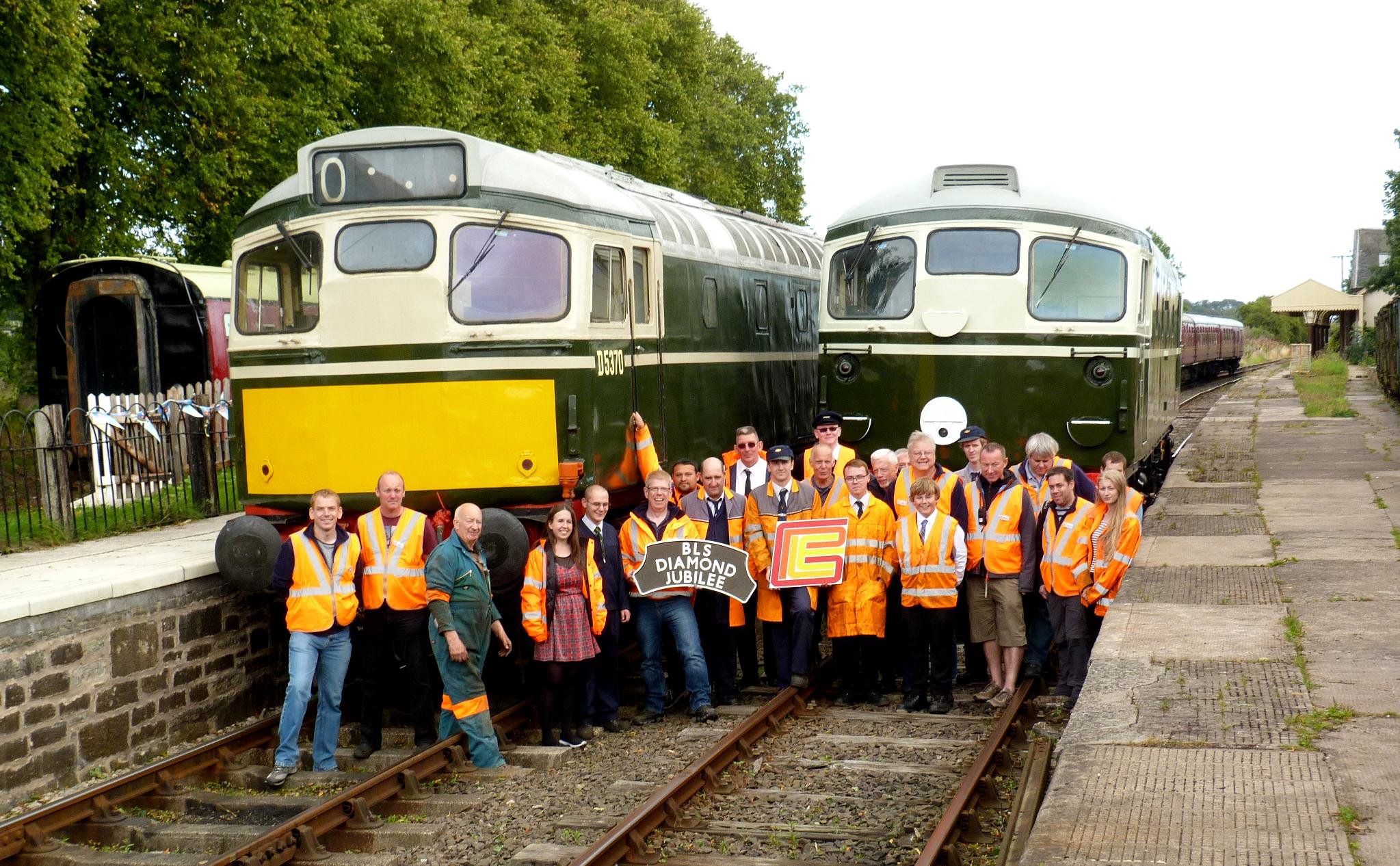 Bridge of Dun station taken during an all line possession after the tour had finished; the BLS, PLEG and Caledonian Railway teams intermingle.
The rebuilt P1 is left, P2 (original) is on the right, looking east towards Kinnaber Jn (the end of the current line is just beyond the coaches);
Brechin (and Forfar) are behind the photographer. This was once a main line from Glasgow (and London Euston) to Aberdeen used by Nigel Gresley's A4s!

With thanks to Jim Sellens.

Some of our miniature men (and ladies!) then made carefully for Kerr's Miniature Railway at Arbroath (via the local road train in some cases); it was no coincidence that this 7¼" gauge line was shown on the track plan for the weekend. This very friendly railway dates from 1935 and is owned and run by the third generation of the Kerr family. After a few 'normal' runs a quorum was secured for an 'ad hoc' all lines special after public running. This was duly achieved including ends of lines at all three 'West Links' station platforms, across the turntable into the loco shed (just) and No3 carriage siding. Trains normally propel back from the far 'Hospitalfield Halt' terminus but for the first time in many years the run round loop was used (and by a coach with passengers too). Even more unusually was the run onto the turntable from the platform line involving travelling through a bush to the buffer stops! (Yes, we were bushed!) Every 'big train' passing on the adjacent Aberdeen to Dundee line sounded a friendly greeting on their horn and the drivers waved. 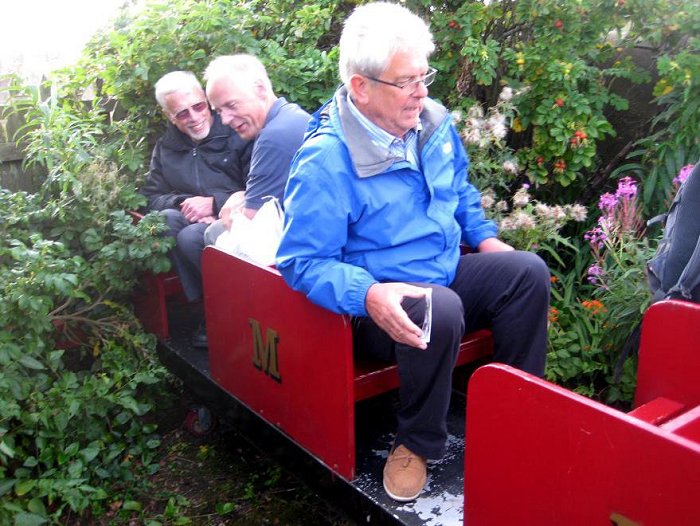 Track in hand is worth two length in the bush? Some random members at the end of line;
Kerr's Miniature Railway turntable - disused for years and seized up (it was checked).
One of the red wheel on which it used to rotate can be made out beneath the rear of the coach.
[© Geoff Noakes 2015]

Day 3, The Royal Deeside Railway, Sun 6 Sep: 66 people made it to this relatively new standard gauge heritage line on the trackbed of the Ballater branch http://goo.gl/WRZXVc (CA 18 Jul 1966) with great prospects for future expansion. Starting at 10.00 from Milton of Crathes station, a new location but in original style, a very thorough trip using 03094 over the 1m 8ch line followed, heading west, before public running. Our train was the first carrying passengers on the extension over Birkenbaud level crossing and beyond. Back at Milton, the running line's eastern extremity, the rounding loop headshunt and the start of the steam shed branch were all visited, with a full traversal of the loop as well. We were made most welcome and participants could stay on for extra public runs. Thanks to Kev Adlam for arranging this excellent visit (which was, for many, their first here) and the previous one to the Caledonian Railway as part of this weekend. One feature of the three days was that there was plenty of leisure time for additional activities and socialising (for those not commuting from Stirling!). After Deeside some went for a ride on the 2ft gauge Alford Valley Railway, 24 miles away, Stonehaven's land train and/or Craigtoun Miniature (which was running at 16.40, Alan!) near St. Andrews while others, perhaps bravely, visited the Tweedbank line (its first day of normal public service) on their way home. Thanks to everyone involved in the organisation and execution of a most enjoyable and memorable Scottish weekend.

With thanks to Jim Sellens.