This new type of fixture allowed members to experience the busy Cardiff Valleys commuter network on an average working day. Electrification is on the cards, as the centrepiece of the planned 'South East Wales Metro' network, but for now the evergrowing demand has to be met by ATW's current fleet of Class 142, 143, 150/2 and 153s. 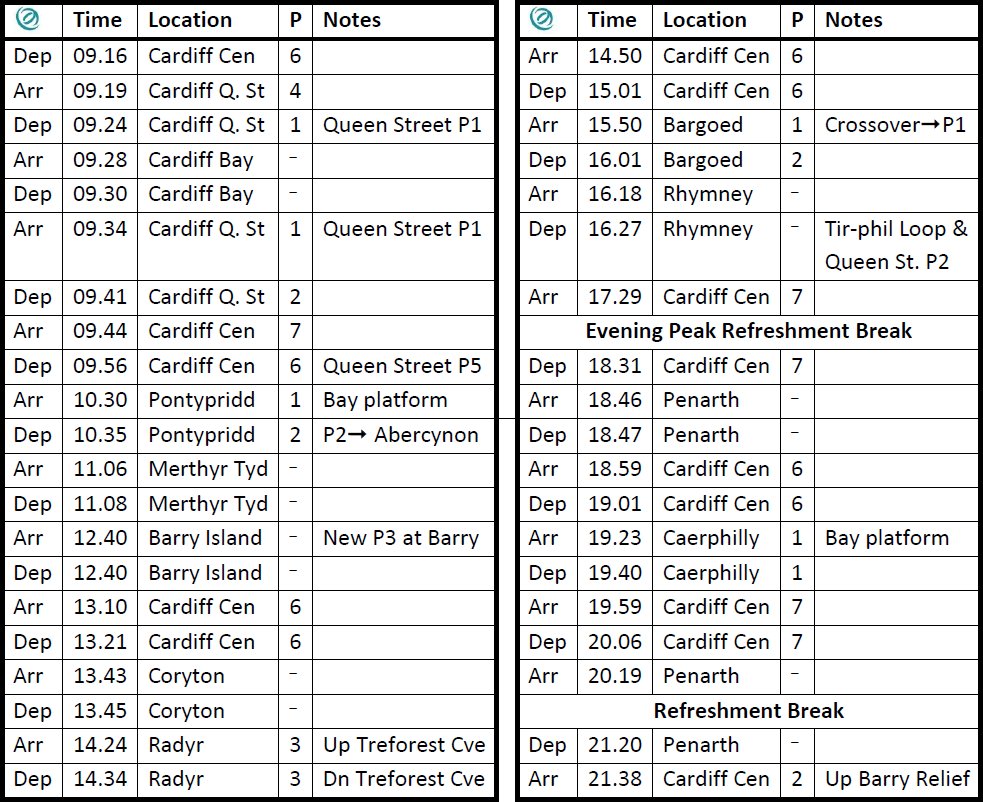 Your Wales Sub-editor elected to forego the initial Cardiff Bay sortie, meeting the other 26 members on P2 of the much-enlarged Queen Street station to join 150227 on 09.39 Bargoed to Penarth, for the short hop to Cardiff Central station. The others had found an understanding train crew on 153367 for their trip to the Bay and return into Queen Street's new bay P1 that, for some reason, needed to proceed further in than most workings! This bay has no overhead cover and is notably further from the steps than when the Bay shuttle formerly left from alongside the stairs on what is now P2. It will also be too short for the suggested 4-car EMUs, although it is proposed to run Cardiff Bay trains through (possibly to Coryton) with electrification. Nothing is finalised but one day bay P1 may have little or no use! Central's new south side station buildings were observed to be almost complete, and construction of P8 and its new buildings well advanced, although track connection and commissioning must await later stages of the resignalling project. Members were also able to witness arrival of ATW's flagship 'Gerallt Gymro' working (aka 'Gerald'), behind 67002. Our immediate objective though was to join Pacer combination 143616+142073 on the 09.25 Barry Island to Pontypridd. New footbridges, including lifts, were noted under construction at Llandaf and Radyr stations, but the busiest intermediate stops at this time of day were Cathays and Treforest, serving respectively Cardiff University and the University of South Wales. Despite a two-minute signal stop at Pontypridd South Jn, arrival in the new Pontypridd bay P3 at 10.28 was ahead of schedule, but frustratingly two car-lengths short of the buffer stops; it appears that coverage of those last tantalising yards must await the longpromised introduction of six-car trains in the Valleys. The only route from the buffer stops to the ticket gate exit is to walk back down the bay platform and across, so it is currently helpful for workings to stop short as per the 2/4 car stop board. A timetable quirk at this time of day effects a changeover of a 2-car with a 4-car diagram, and participants were thus able to join 150229 for a rare Up departure from P2, working to Merthyr Tydfil via the crossover north of Pontypridd Jn. Crossing a Down working as booked at Merthyr Vale loop, the group then arrived at the shortened Merthyr Tydfil terminus at 11.03½, slightly ahead of the advertised time. The train was away again a minute late at 11.09, all the way to Barry Island. Passing 66192, at Treforest on the 10.30 East Usk Yard to Tower Colliery (a large opencast disposal site) empties reminded us that there is still railfreight in the Valleys.

Slight checks approaching both Queen Street and Central did not cause any significant delay, and the greatest interest was to observe the revised layout at Barry, where trains for the Island must now use the new/reinstated P3. The Barry Tourist Railway (with its new mainline connection from P3) was not in operation, and the only steam interest of the day was thus the chassis and cab of 9F 92245 outside the shed. For PPM reasons, advertised arrival times at ATW termini are always shown later than the WTT requires, explaining the apparent anomaly of simultaneous arrival and departure times at Barry Island; our actual times of 12.37½ and 12.40 were ½ early and 1 early respectively by the Working Timetable (WTT), and reflect a very efficient turnaround by the crew. Interestingly at Wrexham Central in the public timetable, trains leave 2 minutes before they are booked to arrive, suggesting a 58 minute wait for the next one (that you are actually sitting on!). Our party finally decanted from 150229 at Central (the train continued to Aberdare) after almost 2½ hours on board. It had, incidentally, been given preference at Penarth Curve South Jn over EWS 66091 on the 10.54 Tower to Aberthaw coal hoppers. The more nimble of the party found time to gather welcome refreshment from the Upper Crust kiosk on P2 (and the really nimble from the Pumpkin on the concourse) before our next journey; 142010 working the 13.04 from Radyr to Coryton, where attractive flower beds demonstrate the benefit of a local 'station adoption' project. Arrival at 13.41½ was a half-minute late by the WTT (not due to the friendly crew ensuring the platform's full length was covered) and the train was away on time at 13.45 back to Radyr. A two-minute signal stop waiting the road at Heath Jn had been recovered by slick station work at Queen Street and Central, taking the newly-redoubled Up Treforest Curve to Ninian Park. 'Gerald' was noted on shed at Canton, as was car 55722, separated from its Class 142 partner. Significant greenery in the four-foot suggested that the weedkiller train had not lately covered the City Line, and passenger traffic was light on this journey. An obliging crew allowed the BLS headboard to be placed on the unit for a photo during the turnround in Radyr P3 (14.21½ to 14.34). After admiring the speed of progress on the station's new lifts and footbridge, the group returned via the Down Treforest Curve. A two-minute signal stop on the Up Barry Relief at Cardiff West was reflected in our 14.52 arrival at Central, whose facilities were again welcome whilst awaiting 2D50 14.47 Penarth to Bargoed. Our day having thus far run almost perfectly to time, it was a surprise to find now a slight delay; the preceding Merthyr train left 6 late, and ours 5 late, formed of 142069 +143609, the latter named in honour of local celebrity Sir Tom Jones (not unusually!). Domestic commitments sadly forced your Sub-Ed to alight at Llanishen, (2½ minutes late).

Suitably lightened, the train picked up all lost time and arrived at Bargoed, over the crossover into P1, two minutes early. The party sampled the station shop and either the lifts or stairs to P2 to await the 16.01 to Rhymney. During the lull, our keen-eyed Fixtures Secretary was concerned at what many of us had thought was just an oil spill on the track in P1. Kev photographed this and gave the details to the friendly DSM who met our group on arrival at Rhymney, who was concerned that it might reflect a track defect and arranged for an inspection. Unfortunately, despite yet more accommodating ATW train crew, Kev's public spirit could not be rewarded with a run up the end of the platform as some regular passengers had the audacity to have boarded! Leaving on time, the new Tir-phil loop was sampled, which would allow a half-hourly service (currently mostly hourly) beyond Bargoed, which itself generally has 4tph to/from Cardiff. This has been held up by lack of rolling stock. Although the loop has been in operation for some time, much work is still being done on the station itself. With a break looming at Central, avoiding the evening rush hour out of Cardiff, some members took the opportunity to leave at Queen Street instead, seeking refreshment and/or haulage opportunities.

The threatened heavy rain failed to land, despite leaden, grey skies, and members stayed dry (outside at least) before meeting up for the 18.31 from Central to Penarth. However, 'emergency engineering work at Bargoed' caused this to be shown late (starting from Rhymney) and everyone began to wonder if Kev's public spiritedness might require some last minute changes. Fortunately, the delay proved slight and this service was sampled to Penarth's single platform, where it was noticed that our 4 car unit's stop board was further along than the 2 car limit, and back to Central where the rear unit was detached. We continued in what had been the lead 142 to what was, for many, the highlight of the day, Caerphilly's reinstated bay platform. Signalling no longer allows reversal in the Down platform, so all services from Cardiff turning back must use this bay. Latterly, this had been the headshunt for access to the coal depot until that closed which then allowed the Caerphilly Railway Society to extend their tracks from the old Caerphilly Works (now part of the Harold Wilson Industrial Estate) almost to the old bay. The 142 moved forward to the safe limit, greeted with applause. The driver understood what we were after now and kindly offered to request Cogan DPL when the unit returned to Penarth.

Approaching Central, darkness was starting to set in but gave a remarkable view as the unit dropped down the incline from Queen Street, with the yellow station lighting very effectively illuminating the platform areas but little else. On arrival, 142076 coupled up to the waiting 150283, although the numbers travelling to Penarth would have been adequately managed by our 142. This did require a driver change and, with a TSR applying to Cogan DPL, the group were warned that it was unlikely this could be covered. This proved correct but, having opted to go to Penarth earlier on this, rather than wait at Central, the party were able to sample The Railway Hotel's hospitality, not surprisingly close to Penarth station. After a very sociable break, participants returned to Penarth for the 21.20 to Cardiff, which then forms the 21.55 through to Crewe. For those like Kev travelling to Crewe, it was pleasing to see 150251 arrive to form this rather than a pacer. It was booked into P1 at Central via the amended Up Barry Relief. How could members know they had done this, it was asked, now that it was nearly dark? With one member's access to real time signalling layout occupancy, the 45o feathers at Penarth Curve S Jn and running on the left hand line after, there was no doubt. The last section of targeted track was achieved as the train took the ladder across to the Up Main. There was a last minute change as it went into P2 at Central (booked P1), substituting one regular passenger route for another.

The group had been entertained on the way to Penarth by one member's slide show on his laptop of shots he had taken in 1987. It was very interetsing to see what had changed. Merthyr Tydfil then still had two platforms, the full length of the original station. Now it has one short platform at the edge of the old station layout, replaced by a supermarket and car park. Rhymney, however, looks much the same but rather tidier now with trees covering the mounds behind the carriage sidings. Cardiff Bay was Cardiff Bute Road in 1987 and still had track on the eastern side of the platform, but very few trains (now it is five an hour!) alongside where the Barry 10 had briefly sat. Much has changed physically; perhaps more importantly, the service frequency and passenger take-up has hugely improved. This indicates a progressive railway that provides the services passengers need and will use, greatly aided by the helpfulness of the various ATW train crews met during a very successful and enjoyable day.

Our collective thanks to our Committee member and ATW Assistant Train Planning Manager David Clark for all his excellent work in planning the project. A most enjoyable, sociable and interesting day. With e-BLN 1240 are notes on the routes thanks to Paul Jeffries.