There were 152 participants on this unusual railtour run in aid of three cancer charities. Formed by especially prepared 319444, it covered 157m 55ch with over 19 manoeuvres, meticulously planned and executed; performing excellently against the schedule. A cab video https://goo.gl/gw83rx and, for many the highlight https://goo.gl/QhmW9L of the excellent tour, Smithfield Sidings. Thanks to all at Thameslink, and especially project manager Matthew Dodd and NR Mobile Operations Manager Robin Morel, for making it happen. An electronic version of the route itinerary / historical notes is attached to e-BLN courtesy of the compiler, David Palmer. Stephen Phillip's tour map and track plan was with e-BLN 1236. Additionally a member has advised that there was a significant 1¼-mile WW2 connection immediately south of Napsbury station from the Midland Main Line (MML) opposite the signal box. See map below (OS 1" to the mile 6thSeries) which although dated 1945 shows the link line (correctly??) as 'Old Railway' and lifted. 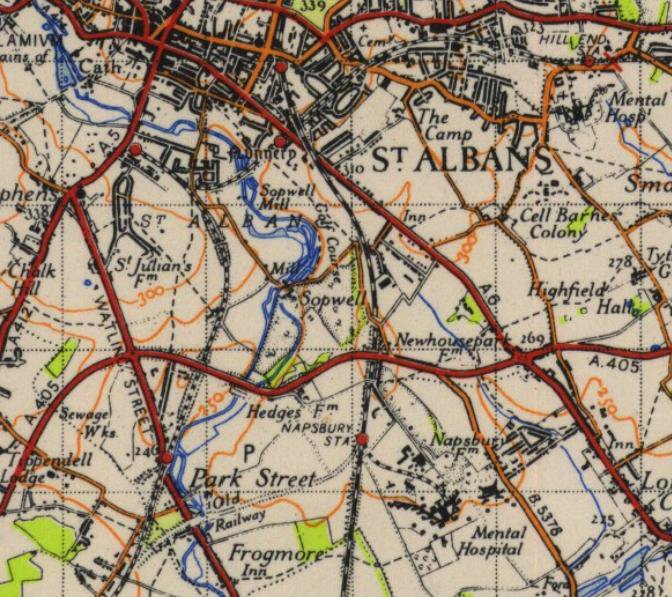 Heading south west from Napsbury, with a bridge over the A5 (Watling Street) it joined the St. Albans Abbey Line just north of the present How Wood station; south of Park Street station. A WW2 rail mounted gun was stabled on it at times. Traces are visible and a cul-de-sac, 'Branch Road' (a very desirable address for Society members) runs south of part of the route. It can be seen heading southwest off the former 'Watling Street' (now at the junction of Park Street and Frogmore) south of the line's embankment there. How Wood station did not open until 22 October 1988 where the unmetalled track crosses the St. Albans line at the bottom of the map so is not shown. Moving north, Park Street station is seen on an embankment by the 'kink' in Watling Street. Further north still along the branch is St. Albans Abbey terminus with its Great Northern branch to Hatfield trailing in from the east (BLNs 1233.976 & 1234.1074). The first station just before it passes under the MML is St. Albans (London Road) then Salvation Army Halt which would have been open but it is not shown on the map; it is on the OS 7th series map. Of note just before Hill End station is a short single track standard gauge branch down to the 174-acre Hill End Mental Hospital and east of that station, top right of map, is the former OS level crossing symbol of a red cross (perhaps more suited to the previous halt?). On the MML itself another single track branch (mainly used to bring coal and supplies in) diverges south east the London end of Napsbury station to the eponymous mental hospital with capacity (!) for 2,000.

Back on board our railtour a charity raffle was held with amazing prizes, and a fun quiz was undertaken (BLN 1237.1346 and below) the winners scoring a very creditable 16/19. A 'silent auction' for a cab ride back to Bedford resulted in a very generous donation. Chris Green, the former Managing Director of Network South East (inter alia), was on board spending most of the day chatting with passengers, signing tour brochures and catching up with former colleagues. There were also guests from the St. Albans South Signal Box Preservation Society and the Network South East Society who explained their respective projects to passengers. Chris Green was heard to comment that he 'needed' the West Hampstead Down Carriage Loop so was delighted when we covered it. Interestingly it had fast turnouts but mostly jointed track and we were the first passenger carrying train. Participants were also delighted when we were unexpectedly routed 'bang road' in each direction between Blackfriars and City Thameslink so covering four crossovers! A 'rare track' summary for the tour:

The Fixtures Secretary wishes to thank the stewarding team for their assistance with this particularly demanding project.