Sixty BLS Border revivers (including six volunteers from Whitrope Heritage Centre) continued southwards through the so-called 'Debatable Lands' of not that many centuries ago, dismounting a short distance on the Scottish side of the now more peaceful line of demarcation. What is not debatable is the quality of the visit to Saughtree (a blink and you will miss it hamlet), the only Scottish intermediate station on the Border Counties Railway between Riccarton Jn and Hexham, CP October 1956, and CG in 1958. Set in superb, remote and sparsely populated Roxburghshire countryside, part of the station building was leased by Newcastle University archaeology department for a time; this ended in the mid-1980s, and the building and two acres of land was sold in 1987. From over 200 bids, the successful purchasers were our member Geoff Mann and his wife Meg. The new B&B operation here is now in the hands of one of their four daughters, Rachel Dumbarton and her husband Rob. Try the excellent B&B on offer (heartily endorsed by Mr and Mrs Scottish Sub-Editor) and you can read the whole story from 1862! The guest accommodation has its own private entrance from the platform to the waiting room, with TV and tea-making facilities. Breakfast is served there each morning. Access from the waiting room to two adjoining single bedrooms (formerly the ticket office and the ladies waiting room) leads onto an en suite shower room. http://goo.gl/rJkosh Tel: 013873 76213. 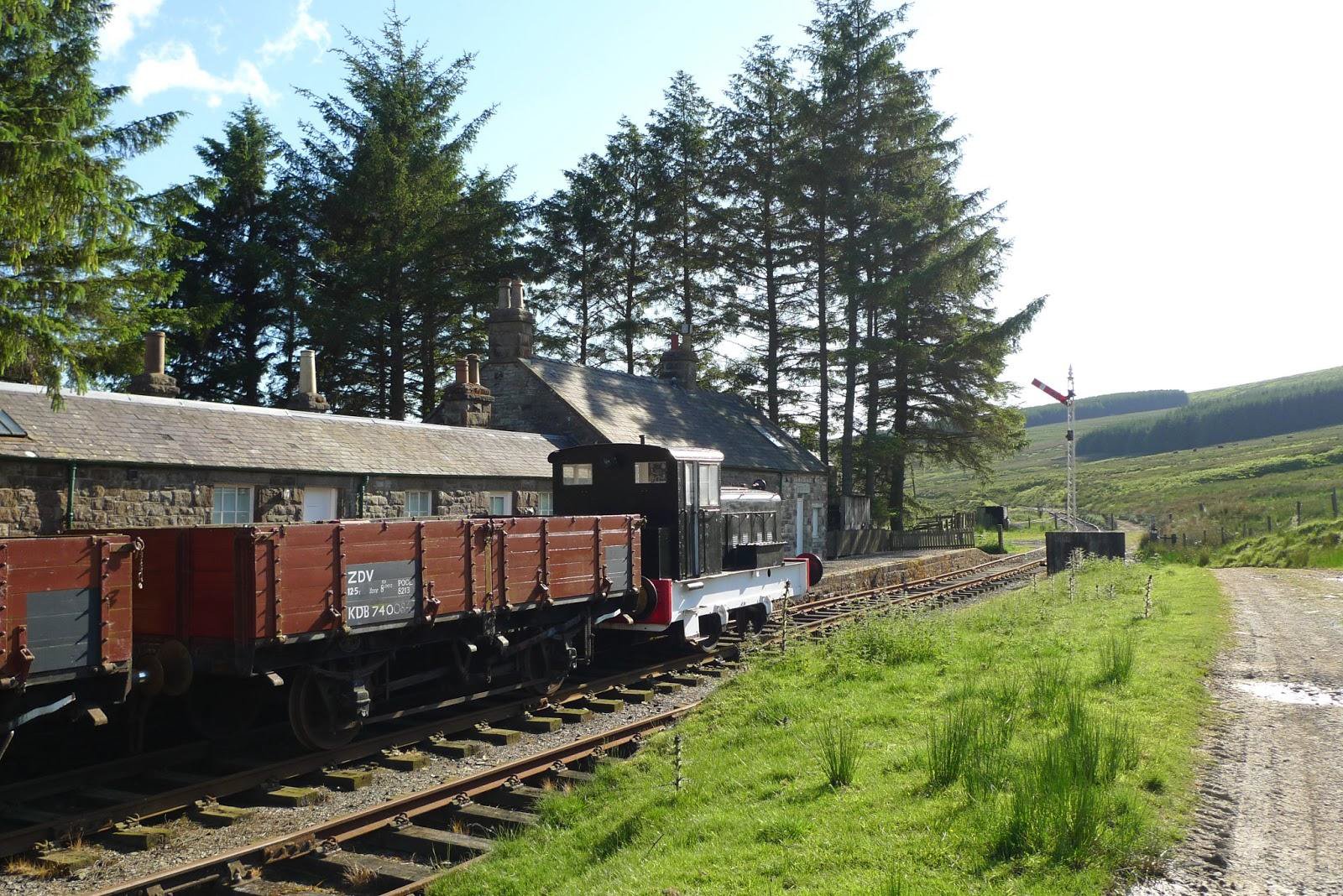 Saughtree 2009.
[© Copyright Les Hull and licensed for reuse under this Creative Commons Licence]

The track and rolling stock was all obtained by Geoff and his contacts locally and from around the country, they also restored the station building to a habitable condition, installing electricity and water. Our party had a successful all-track coverage commencing around 11.30. Traction was a Ruston 0-4-0 DM No.275882 'Meg of Saughtree', originally from Hull Oil Refinery. Passengers rode in two 13- ton 5-plank wagons B740080/4 (seating with ingenious concealed stepped access; Geoff is an architect of repute!) and in a 20-ton brake van B950001 'Les Prothero', named after a late stalwart of the works here. It has the distinction of being the first brakevan built by BR; an LMS design was used. There is over a third of a mile of 'main' line, with a siding into a loading bank opposite the passenger platform. A headshunt from this loading bank parallels the running line southwards; each of these is long enough to accommodate the train. Going north a siding trails back on the Down side towards the station, and on this a facing point leads onto a connection into a building, which once provided accommodation for two railway families. It has been converted into an engine shed which houses a Permaquip four-seater man-carrier (perhaps a Mann-carrier?). The trip (with 'Meg' at the north end of the train and Geoff driving) began from the platform, propelling back to where there was once a four-arched viaduct (over Dawston Burn and the B6357 road), demolished by Borders Council in the 1960s. The north extremity, loading bank and its headshunt were also covered as was the siding. The radius on the curve to the engine shed is too tight for the wagons to clear the entrance so the trolley was used to give rides between the shed branch and the very end of line, through the (opened) gate that keeps the local sheep out. Being open and low on the ground the exhilarating ride appeared fast.

Tea, coffee and biscuits were kindly provided. To recognise the facilities provided by Geoff and his family, a £200 donation was made to the local volunteer 'Newcastleton Rapid Response Service' providing medical assistance whilst awaiting an ambulance. This can take a long time in this remote area with poor roads.