Like birds of a feather many of the morning BLS brood 'flocked' down the M6 (97 miles as the dove flies), to 'land', on the Dove Nest Group management centre, Crosthwaite Mill, 6 miles west of Oxenholme. This was for a 16.00 Kentrail Enthusiast Group trip on the rarely visited 270yd, complex, 7¼" miniature railway nestling in its sylvan grounds. The most friendly and accommodating host Chief Executive, Dave Moore, has owned the centre for some 22 years. He acquired the railway lock stock and barrel in situ (from a hippy 'organic vegetable' style commune in which context the railway's function is unfathomable!). The railway is coincidental and actually has nothing to do with the work of the centre. The party were furnished with a battery electric locomotive and a four-seater coach and simply let loose! Indeed that is the entire rolling stock fleet of the line and its provenance is completely unknown; it all looks quite heavily built and rugged up to the bodywork and then seems to give way to the homemade seats made from right-angled section and square cut wood. (If anyone can even suggest where it all came from, looking at the photo below from Simon Mortimer do advise; Dave would like to know!)

The site regularly floods from the VERY adjacent beck and so the railway has now been entirely set on concrete. Unfortunately the softwood sleepers have allowed the rails to spread out of gauge and move a little in places making progress sometimes a little perilous especially when within a foot of the riverbank. However, slow driving, luck and the occasional re-railing exercise saw all the participants 'wing it' and eventually cover the whole layout without any splashdowns. These have apparently met some putative passengers in the past including three 'well-built' teen chicks making an unbraked descent of the loop with a tangential trajectory over the edge into the river! Our manoeuvres were punctuated by guided tours of the superb Grade II listed mill itself. The mill last ground animal feed in 1965, having operated since the 17th century and still has all the apparatus intact, some fully carpeted around including chains and drive belts between the floors and three millstones, one of which can still rotate! With the battery electric whirring its last, the party made a final reversal into the shed; Dave said he had never seen such a thorough traversal and was delighted by our interest in his railway. We had similarly been delighted by this almost unknown line, its mysterious train and the lovely weather. Special thanks to KEG and BLS members Simon Mortimer and Rod Bryant for 'hatching' the visit. 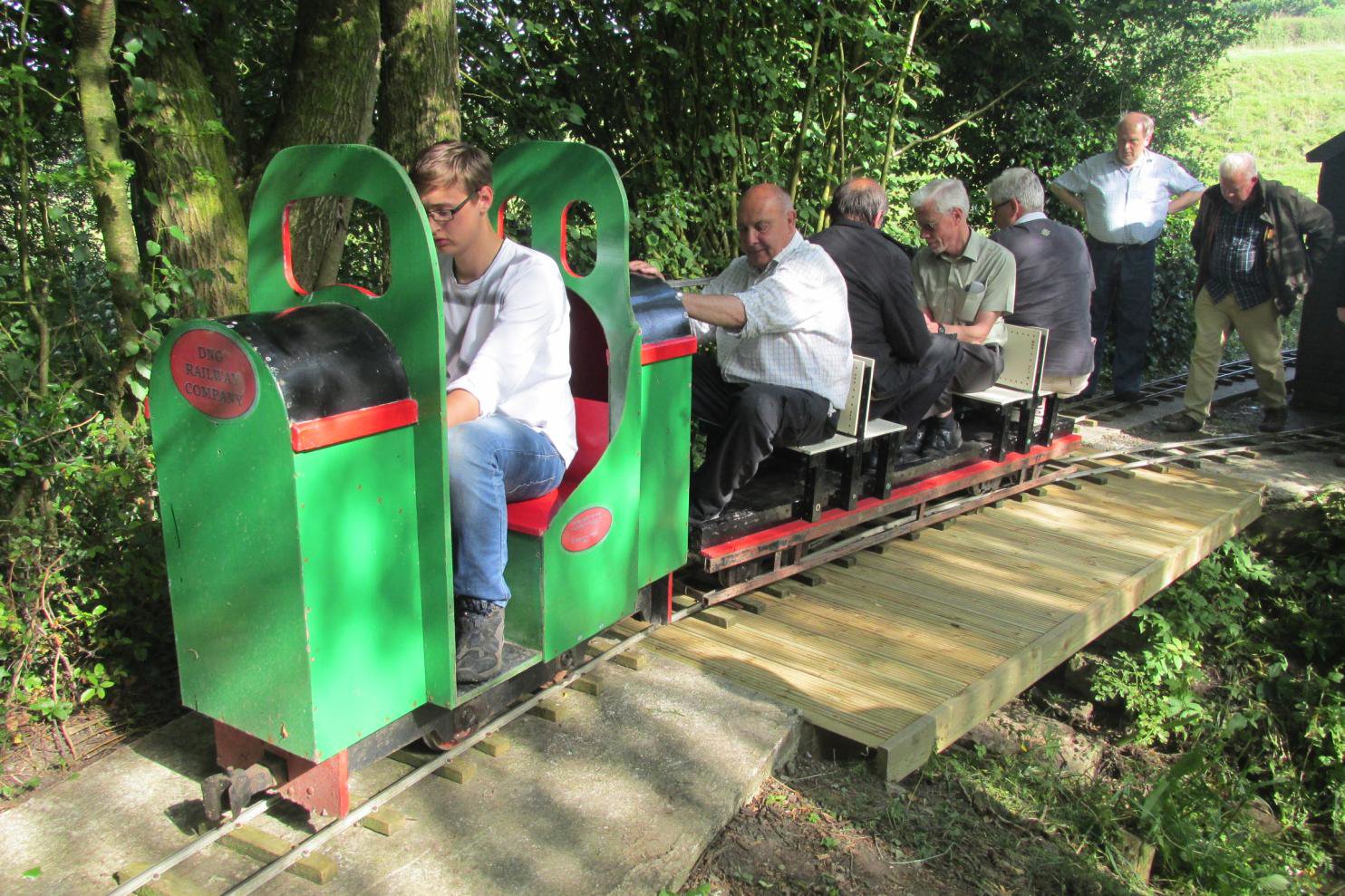