Refer to the map below to help make sense of this report, an area with much incredibly complicated railway history. 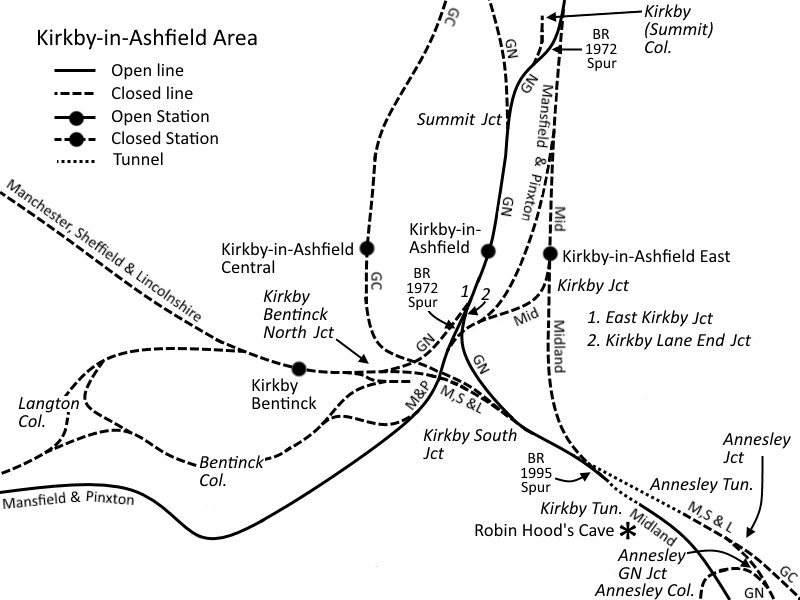 The current Kirkby-in-Ashfield station opened in November 1996 as part of the 'Robin Hood Line', interestingly a section of line without a previous passenger station. Following the Shardlow visit, a band of 12 merry men (no one had made Marian come along) and a dog (travelling on a rover ticket perhaps?) met there at noon. Firstly, the party walked an unnamed road once the route of the 1819 Mansfield & Pinxton Railway (4'4" gauge and horse drawn) converted to standard gauge in 1849 by the Midland Railway as part of their Pye Bridge to Mansfield line until 1892, when a new route into Kirkby Station (East) was built, which itself was closed by BR in 1972 by building two new chords! At the end of this road the Great Northern Railway (GNR) Leen Valley Extension Railway crossed the Midland. This closed in May 1968 and was bulldozed away; who would have thought that it would be revived 26 years later as part of the Robin Hood Line? A footbridge over it gives an excellent view towards Kirkby Lane End Jn, near the site of Kirkby East Jn. A second footbridge crosses the BR 1972 spur connecting Pye Bridge to the GNR line. The other 1972 chord at Kirkby Summit then takes it back to the Midland. Next the GNR East to North curve trackbed, closed by 1905 due to a dearth of traffic, took participants onto the grassy hillside known as Bentinck Banks. Here 50 years ago two double track railways, the Mansfield and the Great Central (GCR) (originally the Manchester, Sheffield & Lincolnshire) swept across the valley on viaducts with a colliery branch alongside, nowadays nothing! There is just a green sloping hillside down the dale to the infant River Erewash and a slight dip in the tree line opposite. A short stretch of the GCR was found towards Kirkby Bentinck before descending the GCR Bentinck Colliery Empty Wagon Line (it was!) and its back shunt into the Empty Wagon Yard towards the massive derelict colliery site (occupying a square mile).

Now it gets a bit complicated! The group followed the Bentick Colliery Midland Empty Wagon Line which joined the extant Pye Bridge line at Sowters Crossing (137m 67ch from St. Pancras), the site of Bentinck Colliery Sidings signal box. Participants were now in Portland Park and took the path on the well defined Mansfield & Pinxton Railway embankment northwards. Shortly came 'Kirkby Cutting' where the GCR and Mansfield Railway crossed overhead and converged to the east alongside each other. It is now an almost impenetrable jungle (but not to us as our guide's trusty secateurs were brought into action against the Greenwood). The double track Mansfield Railway (later part of the MR) was followed on a falling gradient through the deep cutting with a high solid stone retaining wall in perfect order to come alongside and join the Great Central, also double track. Further on towards Kirkby South Jn (where to add to the interest the GNR joined in too) is flooded. Therefore, the party returned along the Great Central paralleling their outward route at a lower level noting the much poorer and crumbling retaining walls on this side of the former four track formation here. Then, north alongside the still operational Pye Bridge line, the divergence right of the pre-1972 route was noted as the Robin Hood line came in from our right, taking the ex-GNR route. Re-crossing the footbridge we walked the 1892 Midland route back to Kirkby, to Lindley's Lane, the site of Kirkby (Station) Jn, to the Midland's Kirkby Station later 'East'. All is redeveloped; not a trace of railway, station or level crossing.

Participants 'Tucked' into an excellent lunch and visited the Little John before a short bus ride, rather sheepishly having to ask the driver for 'Mutton Hill Bottom' a.k.a. the bridge over the Robin Hood Line at Kirkby Tunnel. Following the edge of a field we came to Grives Lane AHB Crossing, almost above the buried GCR Annesley Tunnel portal, noting the embankment now on top of the former GCR cutting and the new Robin Hood Line formation (1995, BR's final ever spur!) around it. The group returned to Kirkby (East) along the Midland Line that closed in 1970. Arrival back at Kirkby station was in good time for the 16.21 train to Nottingham. A brief visit afterwards to Warren House Level Crossing (135m 31ch) on the other side of Kirkby Tunnel, found the infilled rectangular GCR Tunnel cutting in use as horse-gallops and grazing.

Thanks to our guide, Tom Gilby for all his thorough preparation, maps and notes that made sense of such a complicated and interesting area for participants on the day and pointing us in the right direction. A seasoned railway rambler was heard to say that it was the most interesting and thorough such walk he had done.