So extensive are the private grounds (the word garden would be inadequate!) that this 1,300m line settles in almost inconspicuously as its circuit loops the lake and then descends around a woodland area with spurs off to steaming, loading and shed areas. In a reverse of normal practice in the initial absence of steam motive power, it was arranged for the available battery electric, a centre cab class 14 lookalike sporting a suitably diminutive BLS 1955-2015 headboard (see e-BLN 1236.1213 picture), to run shuttles into the only siding (off the platform loop) in sight! About 35 participants formed an orderly line to travel all of 30yd in one direction or the other (but highly significant at 7¼" gauge)! This heroic mission accomplished, there began a more extensive tour around the lake mainly to take in the whole of the platform line, as steam hauled trains began to operate via the platform avoiding, line AND the steam powered yacht on the lake (is this a BLS first?)! This, rather faster than its railway counterparts, called Roundtuit, has an engine built by J. Alex-Ritchie of the Steam Launch Machinery Co. of Wrabness, but a fibreglass hull! The steam yacht and trains made a fine sight as they circled the lake in brilliant sunshine with participants aboard, some with ice creams in hand. Later full tours round the upper and lower loops ensued until all had traversed this extensive and delightful line and lake in full. 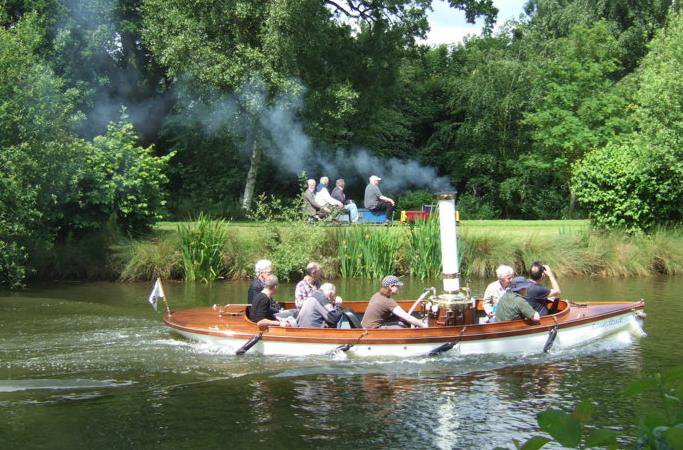 Thanks to Peter Stevenson (owner) and Kenneth Eyre (operator and liaison) for the great success of our visit that resulted in a £300 donation to the local Air Ambulance.