A select few met at Inverness station at 09.30 for a road tour beginning by travelling down the much rarer east side of Loch Ness and visiting numerous sites along the fascinating former Invergarry & Fort Augustus Railway (I&FAR). Many have the wrong idea about this archetypical branch which was actually heavily engineered and intended to become the North British Railway double track Glasgow to Inverness main line. It would have been the shortest and fastest route from Glasgow (160 miles compared with 207 at the time) had it been completed beyond Fort Augustus. The branch managed to successfully avoid what little population there was between the junction at Spean Bridge and Fort Augustus by taking the unpopulated east side of the Great Glen. The Highland Railway also proposed a line between Inverness and Fort Augustus to block a North British extension but did not need (nor could afford) three routes to Inverness and both railway companies agreed not to build the line! 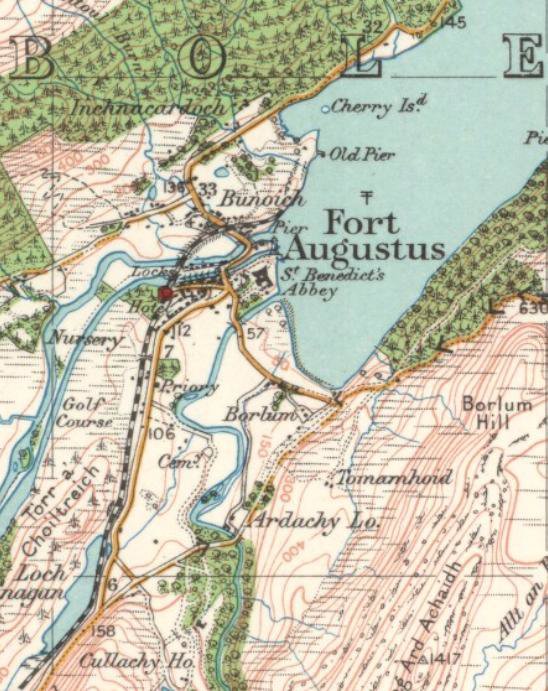 From the 1928 OS 1" to a mile 'Popular Edition' of Scotland (sheet 42).
The line was CP at the time and someone has made a crude attempt to
incorrectly colour Fort Augustus station in red (open) on the original map!
It shows the final section of the pier branch (to 'Old Pier') as lifted at this time.

Locations visited included Fort Augustus station site, where some platform edging remains, the former Caledonian Canal swing bridge and the piers of the River Oich viaduct in the town. A trip in a rubber tyred vehicle was made to the end of the former Fort Augustus pier branch (which had a summer only passenger service connecting with steamers from just 1903 to 1906 and cost almost as much to build as the rest of the line). The station house is intact, now a B&B business. The main branch trackbed (in June in the process of conversion into a high quality, well cleared and well drained cycle path, part of 'The Great Glen Way') was walked for 4½ miles from the former Aberchalder station, through the line's only tunnel, to Invergarry. Extensive use of concrete was noted, in a sympathetic way as the line did not open until 1903. In April 1910 the 24 mile branch was quite difficult to do; an 8.30am (SuX) departure from Fort Augustus to Spean Bridge (9.25/10.25am) arrived back at 11.20. Additionally TuWFO, there was a return working at 2.30pm; MThSO it ran at 7.15pm! The line CP from 31 October 1911 to 1 August 1913 then it was subsidised by Inverness County Council. Final CP was 1 December 1933. A weekly coal train continued SO with Naval traffic during WW2; final CG was 1 January 1947.

This lovely track bed walk in superb countryside with views of Loch Oich and the Caledonian Canal is thoroughly recommended. At Invergarry the lengthy island platform (built to take the royal train, which it did twice) has been cleared and 400yd of track laid as part of a plan to create a railway museum here. The remains of a passenger subway were investigated at the south end. Participants walked to the abutment of the Gloy viaduct then drove to Spean Bridge station (where the I&FAR joined the West Highland line). The former signal box here has recently been renovated, but NR is still looking for someone to take it on for a modern-day use. The station building has become 'The Old Station Restaurant', specialising in fine Highland dining. The group finally reached Glenfinnan Station Museum. This was viewed and refreshment taken in the static buffet car (ex-Mk 1 TSO 3767). Turns were taken at operating the signal box lever frame which has recently been restored with a demonstration simulation. The fully loaded 'Jacobite' steam train was seen returning from Mallaig to Fort Wiliam and later two Scotrail DMUs crossed at Glenfinnan, not bad for a Sunday afternoon.

Returning to Fort William via various locations of railway interest the party dispersed. Two enjoyed a scenic (18.15 'Citylink' service) coach trip back to Inverness through the Great Glen. Thanks to our local Fort William member, Nick Jones, for two very interesting and enjoyable days in this really lovely part of the country.