On the midsummer weekend with maximum daylight and pleasant weather, a group of 10 met at Nairn at 09.15, some travelling on the trains which crossed at the station then. Participants were welcomed, and given a short safety briefing by Local Operations Manager Alex Campbell. Until April 2000, Nairn was famous for the use of a bicycle by the signalmen to travel between the three signalling locations. These were a platform office with the token instruments, (a block post since the line opened in 1856), as well as the east and west signal boxes (BLN 1237.1342 with pictures in e-BLN). This was once a quite common practice on the Highland Railway. Since resignalling, most passenger services use the northern (former eastbound) platform in both directions, which has the main buildings on it. The southern one is now used by Aberdeen bound services if crossing another train (as when our group arrived). Although both signal boxes ('Grade B' listed buildings) are closed, they each retain their lever frames and remain in good condition after renovation in 2012. Signalling is all now based in the platform office which has the unusual combination of a Westcad (WESTinghouse Control And Display) VDU terminal and a Key Token Instrument! The key token working is east to Forres, and the Westcad controls the station area and appropriately west on the single line to interface with Inverness Signalling Centre. The party visited both redundant boxes, the platform office and sampled the excellent 'Coffee Station' there.

Forres (formerly 'Forres East' signal box) was next, once a triangular junction with the line to Boat of Garten and Aviemore, the other end of which is now the Strathspey Railway. There was also a dead straight east to west 'station avoiding line', latterly the goods depot accessed from the east end but now all OOU. The existing passenger line sharply curves towards the town and back again with the station (reduced to a single platform) situated on this tight curve. Key token working is used at this 1896 box in both directions with a 24 lever McKenzie & Holland frame and semaphore signalling. An unusual (passenger-unfriendly!) feature here is that the loop is just east of the station. The box also works a level crossing (now with lifting barriers) but the remains of the gate-wheel are still visible at the west end of the lever frame. The route of the former avoiding line is still visible and this is likely to return to operational use in a few years if the station is re-sited as planned by NR and the Scottish Government (BLN 1237.1325 & 1338) as part of the Inverness to Aberdeen line upgrade. The key token instrument towards Elgin is fitted with a 'token magazine' apparatus. If unbalanced workings result in an excess of tokens at one end of the section, some can be transferred to the magazine (in which they are securely locked) and taken by road to the other end to refill to the other token instrument. 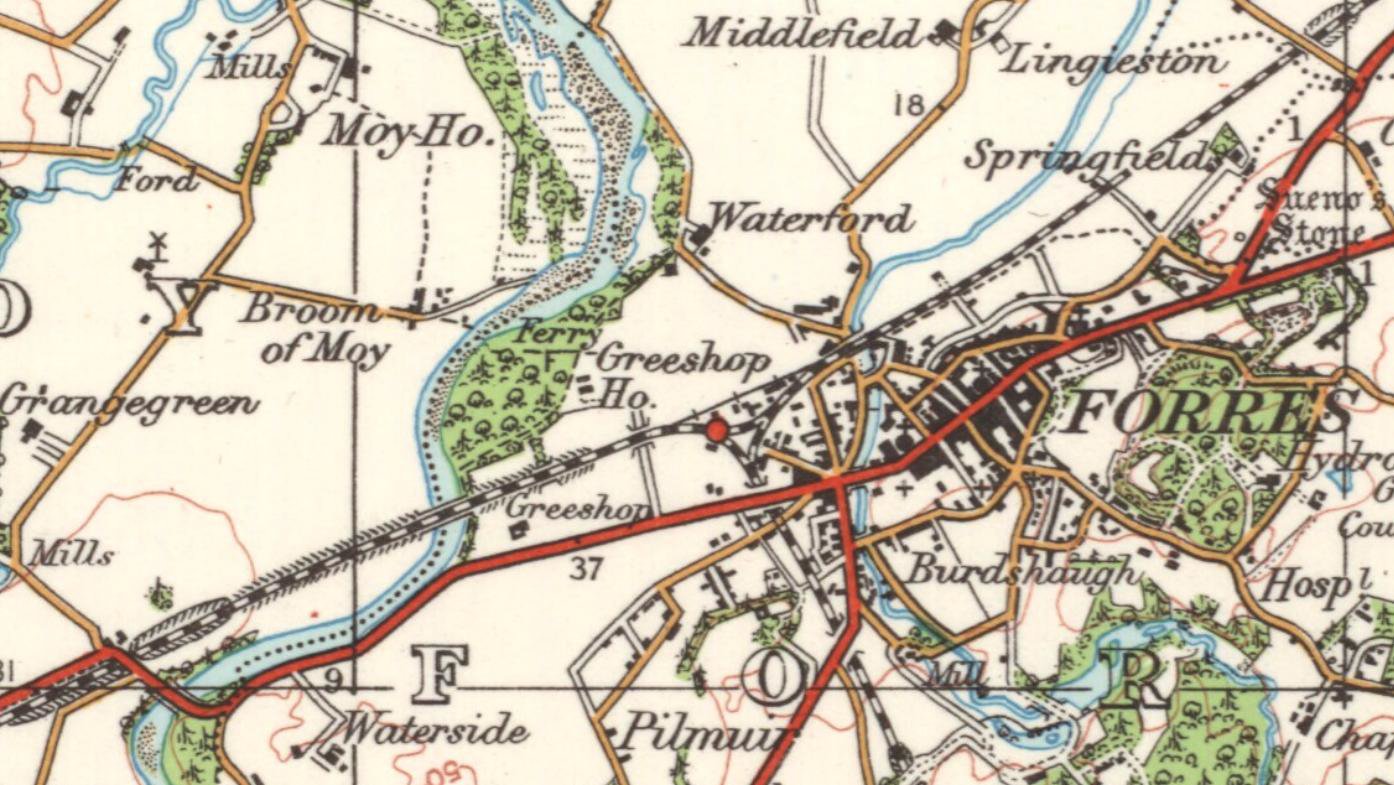 From OS 1" to the mile, sheet 28 Nairn & Cromarty (1926/7 revision). Why is Forres station on such a sharp curve? Nairn and Inverness are to the west, Elgin and Aberdeen east. The straight avoiding line is shown as a 'mineral line', the original (1858) Forres passenger station was at its east end, close to the 'p' in 'Greeshop'. It is the proposed new station site. The line heading off southeast is the original 1863 'Inverness & Perth Junction' line (CP 18 October 1965), from 1865 a constituent of the Highland line, the building of which led to the resiting of the station to its current location. The later 'direct' and present Aviemore to Inverness route opened in stages between 1892 and 1898.

Elgin is the end of key token working on the Inverness to Aberdeen route. The line beyond (to Keith) is worked by Scottish Region Tokenless Block (now known by NR as 'Scotland Route Tokenless Block'). This 26-lever frame signal box was installed by BR in 1951 as 'Elgin West', second hand from the former Mosstowie station where it had been since 1902. It holds the staff (actually a small key) for the Burghead branch, although this has not been used since the year 2000 (BLN 1237.1325). The party did not visit Alves Jn but was told that the points there have recently been renewed and there is the possibility of traffic returning to Roseisle distillery. The extensive but little used sidings at Elgin East are accessed via a ground frame beyond P1, released from the box and allowing trains to be 'shut in'.

Keith (once Keith Junction, as evidenced by its 'KJ' code) took the group from Highland to Great North of Scotland Railway territory. It was the junction for the Dufftown branch, (the heritage Keith & Dufftown Railway, now disconnected from the main line). A small NR stub into Keith branch platform remains. This is believed to be the shortest branch or section now worked by train staff (or token) on NR (BLN 1238.1337). Remarkably few of the 40 levers at Keith are spare as it has a fully signalled loop (both lines are bidirectional), goods yard, sidings and the bay platform; the latter are all little used. 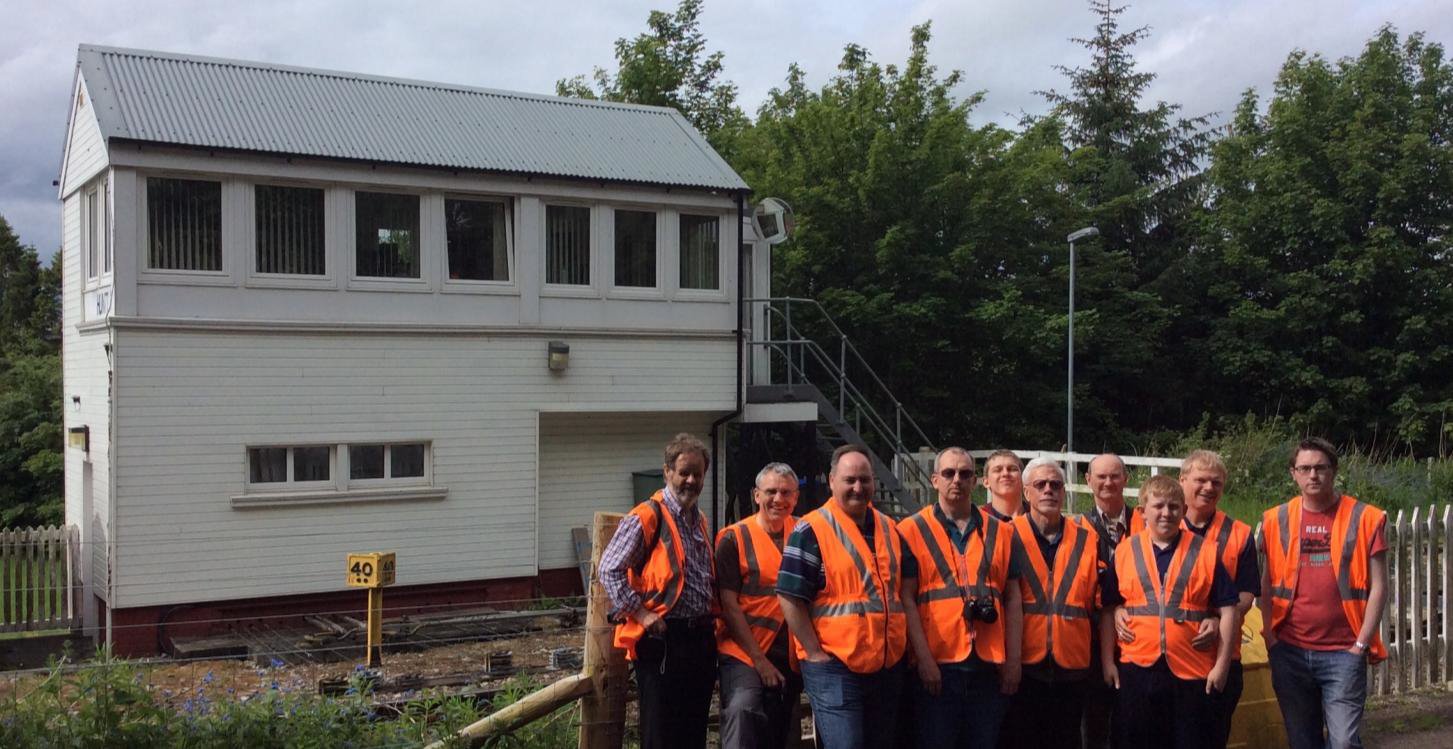 Group picture in front of the very smart Huntly signal box at the east end of the station loop. Unsurprisingly it is exactly 40m 40ch from Aberdeen!
[© Alex Campbell 2015]

Huntly with 25 levers was the final box of the day. A weird quirk of geography means that the line runs NORTHEAST to Inverness and SOUTHWEST to Aberdeen (check your map) which confused several participants on first entering the box. Both station lines are bidirectional but the Loop Line (P1) is favoured because of easier access to the town. When two trains are crossing, the signaller can adjust the choice of platform if requested by Scotrail. If one train has a disabled passenger wishing to board or alight, then that train will use P2.

After a group photo, a collection was made and £285 donated to Glenfinnan Station Museum. NR donated the same amount to CLIC Sargent by 'match-funding'. Most of the party then left and one carload visited the Keith & Dufftown Railway for a heritage DMU ride.