The sad news that the Colliery Railway (opened in 1836) and Snibston Discovery Museum (opened in 1992) where it is situated, were to close from 1 August 2015 attracted 80 members to our visit on Thursday 11 June, a much larger party than ideal but no one was turned away. We were extremely fortunate as, when closure was announced, it was anticipated that the railway would not operate again (repairs were needed to a point and the final working loco whilst staff were being laid off). Numerous phone calls and emails were required but, as visitor numbers increased with the impending closure, our visit was finally agreed. The Museum opened at 10.00, allowing members to enjoy a hot drink and/or bacon cob and view the many exhibits, including steam locos and even jars of 'Coal Dust Jelly', before our special running started at 11.00. Hunslet 0-6-0DH 6289/1966, originally at Desford Colliery, was already coupled to coach TBCK S70576 in Snibston Central platform, alongside the Museum. This coach was part of 4-CEP unit 1589 (originally 7178 built at Eastleigh in 1960) and the 1980s refurbished style was very apparent, although the driving windows and controls at each end were not standard NSE practice they do allow wonderful end views! 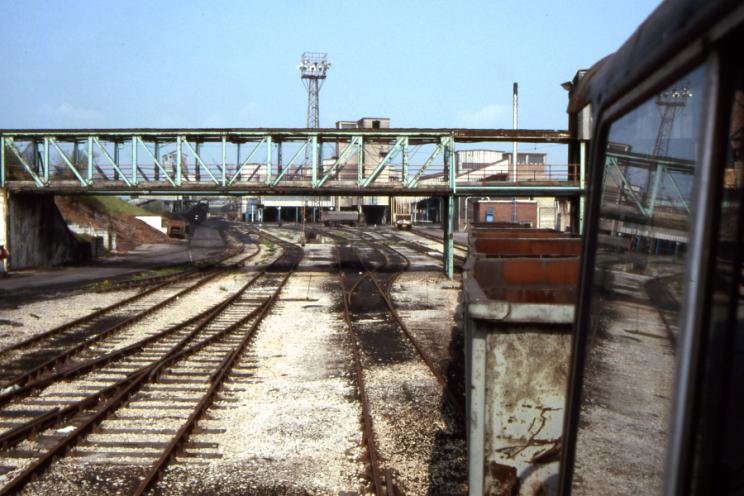 The former Snibston colliery and railway branch on 16 May 1985; note very rusty track. This was the final train
which took the last internal wagons from the site for transfer to Cadley Hill Colliery (Swadlincote). This trip,
arranged by the late Chris Boyle also included a brake van trip from Snibston exchange sidings
to Cadley Hill, via Drakelow Power Station CEGB sidings, where the train reversed.
[© Ian Mortimer 1985] 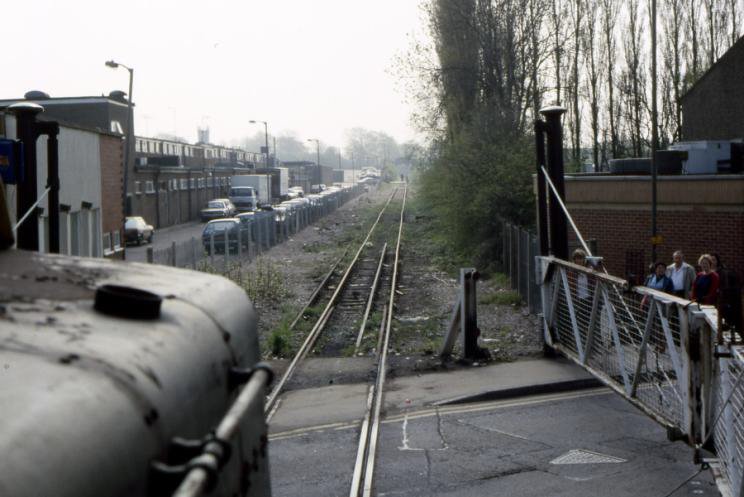 16 May 1985: The Discovery Centre railway terminates behind where the engine is just before
Belvoir Road level crossing and where long trains of coal used to trundle through Coalville.
[© Ian Mortimer 1985]

Our special train ran towards Coalville, Belvoir Road Halt, and slightly into the sand drag before the buffers that protect the busy town centre road immediately beyond (formerly a level crossing when it was the Snibston No.2 Colliery branch, originally opened under the guidance of Robert Stephenson, connecting to the Leicester and Swannington Railway, and latterly an NCB line until the colliery closed in 1983). Then back through Snibston Central, the only station with a nameboard, and over the level crossing by the main Museum entrance, turning sharply left through a right angle to the lengthy headshunt (about 1,200 yd buffer to buffer) which is where the line ended in NCB days. One trip, at least, was mere inches away from the buffers in an area that nature has reclaimed to such an extent that the Elk Sculptures can no longer be seen from the train. Many were surprised to hear that the public runs do not go here, beyond Snibston Central platform. (We were informed that the previous passenger train was our 16 May 2011 tour with 15 participants!) At the south end, the public runs also reverse at the stop board short of Belvoir Halt, which has no regular public access. Once a year on carnival days, however, passengers have been allowed to board there and the train runs into the platform. A short stretch of 2'6'' track was noted approaching the standard gauge loco shed, full of locos and wagons whose appearance suggests they were fully unrestored! Behind these, leading into a workshop, narrower gauge track (from NCB days) was set in concrete but with no rolling stock.

At this point, the standard gauge line splits and passenger services always use the right-hand loop towards Belvoir Road. The very rare and very rusty left-hand loop was covered with a second loco and coach run, accommodating all those who wished the extra track, but the intermediate crossover between each side of the loop could not be used as it was too sharp for the coach. Many cab rides, 3 participants at a time, were provided to cover this and the shed branch right to the door and (despite the railway only being booked to 13.00) were kindly continued. Booked school trips and the important need for train crew to take lunch (on a very hot sunny day) briefly interrupted these but they ran again afterwards throughout the afternoon until past 16.30. This allowed members to also enjoy an excellent early afternoon guided tour of the Colliery buildings or just the loco shed to see its three OOU inhabitants, two steam and one diesel, without missing the opportunity for a cab ride. A quarter of the party had booked for the special lunch laid on and were very impressed with its quality, quantity and value for money, allowing ample second helpings of roast meats and vegetables, followed by creamy and/or chocolate cakes, with fresh tea/coffee. Others dined more frugally in the main café. One member renewed his acquaintance with the mobile but now static 'Century Theatre', built nearby in Hinckley and 'performed' at Keswick for many years, composed largely of three separable elements on road wheels allowing such long distance moves. Everyone who did not have to rush off could do all six elements to the day if they so wished. These were the extensive Museum buildings, including various locomotives and other railway items, track tours on the coach, two course lunch, colliery buildings guided tour, footplate rides, and the track bed walk all with plenty of photo opportunities. 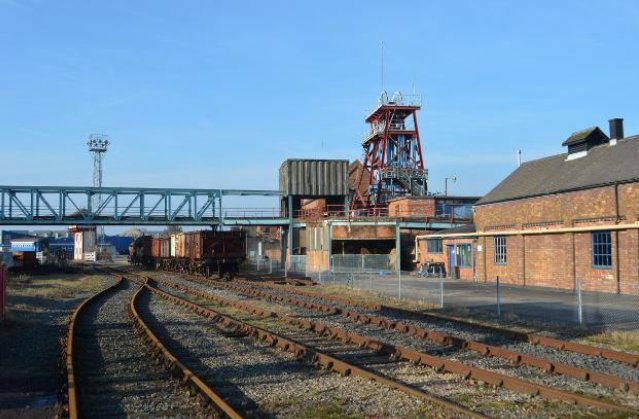 This picture was taken at the museum in 2011, showing remains of Snibston No2 Colliery.
© Ashley Dace, licensed for reuse under this Creative Commons Licence: http://goo.gl/sZhf.

As those on the guided walk of old railways round Coalville left to catch their bus, the rest off the Colliery Tour were taking their cab rides. This was a visit that catered for many tastes and interests, enjoyed all the more courtesy of the various guides, railway and otherwise, keen to share history and local stories whilst ensuring very thorough track coverage. The Judicial Review into the closure is due to be heard on 20/21 July but the Council are confident that their closure decision was properly made and that the Museum will close on 1 August. It is to be hoped that those who take up residence in the inevitable new housing on the site will appreciate the relevance of the Colliery buildings they look out upon that are listed as an ancient monument and have had significant money spent on refurbishment. Sadly the large purpose built museum building is expected to be demolished and the site cleared.