On 1st May a group of 12 met on South Gosforth station P2 where incredibly and with perfect timing battery electric locos BL1 and BL2 (TOPS numbers 97901 and 97902) passed through, pantographs up, hauling unit 4080 'top and tail'! It was being transferred from the non-electrified Hylton Street PW siding (an ex-coal depot) at North Shields, (arriving there by road following refurbishment at Wabtec Doncaster) to South Gosforth train maintenance depot, the penultimate one to return! (Picture below © Donald Stirling.) This had been ongoing at Doncaster and is now almost complete so the trains are smart and uniform. Greater than expected levels of corrosion to the doors and bodywork and other problems has meant that the work has been more extensive (and more expensive) than initially envisaged. The refurbished units will be good for another 10 years' service; replacement is due about 2025. The earliest two non-standard T&W units, 4001 and 4002, are now to be withdrawn from service instead of being refurbished. These were the 2 units at the T&W Test Centre at Middle Engine Lane from 1975. The track followed the Seaton Burn Waggonway alignment and ex-Backworth Colliery Railway, with mock up stations, tunnel and a passing loop, which was then available for special parties to ride on (and we did!). With extension to Percy Main, this is effectively now the Stephenson Railway Museum. 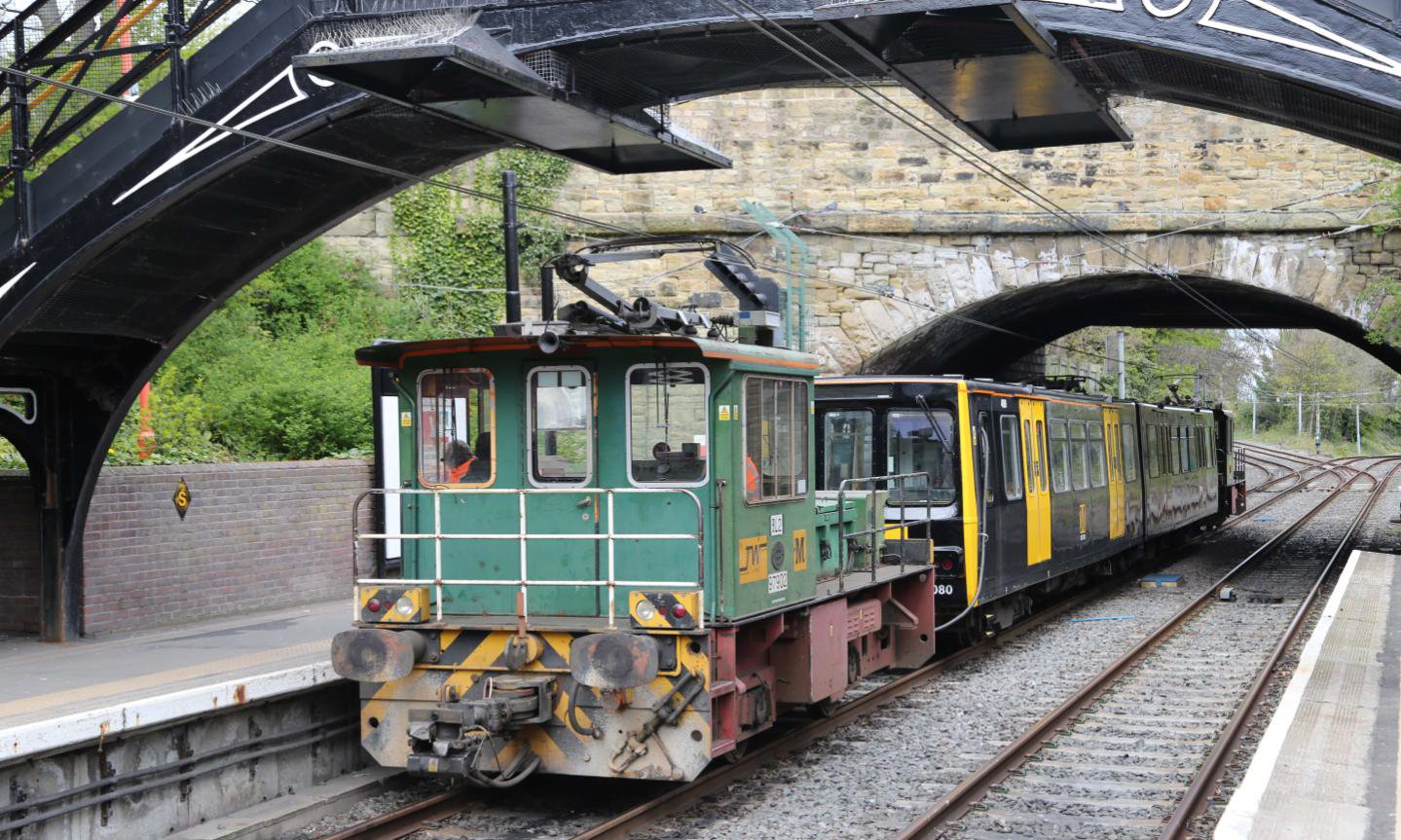 The party then proceeded to the control centre (adjacent to but much higher than the station), signed in and were taken to the control room, after being asked to be very quiet! The Duty Manager showed the group round and explained everything. He is in overall charge during his shift, but does not operate any of the equipment himself being 'strategic' and represents the 'TOC'. This is DB Regio Tyne and Wear Ltd. (a subsidiary of DBS, part of Arriva UK Trains), operating the units on behalf of Nexus (Tyne and Wear Passenger Transport Executive) who have an infrastructure manager present. The control room houses signalling and control equipment for the Metro system with its 60 stations, except for the Pelaw to Sunderland and the South Hylton branch sections. These are signalled by NR from Tyneside IECC, due to the shared running on the former. A large panel takes up one side of the room which displays the system and allows the trains to be 'tracked' (as far as Pelaw/South Shields). Trains are under automatic control using a 'Positive Train Identification' system, although manual signal controls can be used in emergencies. At peak times 78 out of a fleet of 96 units are required to be in operation. The high frequency of the trains means the allowance is 30 seconds to open and close the train doors at outlying stations but only 24 seconds in the inner area! 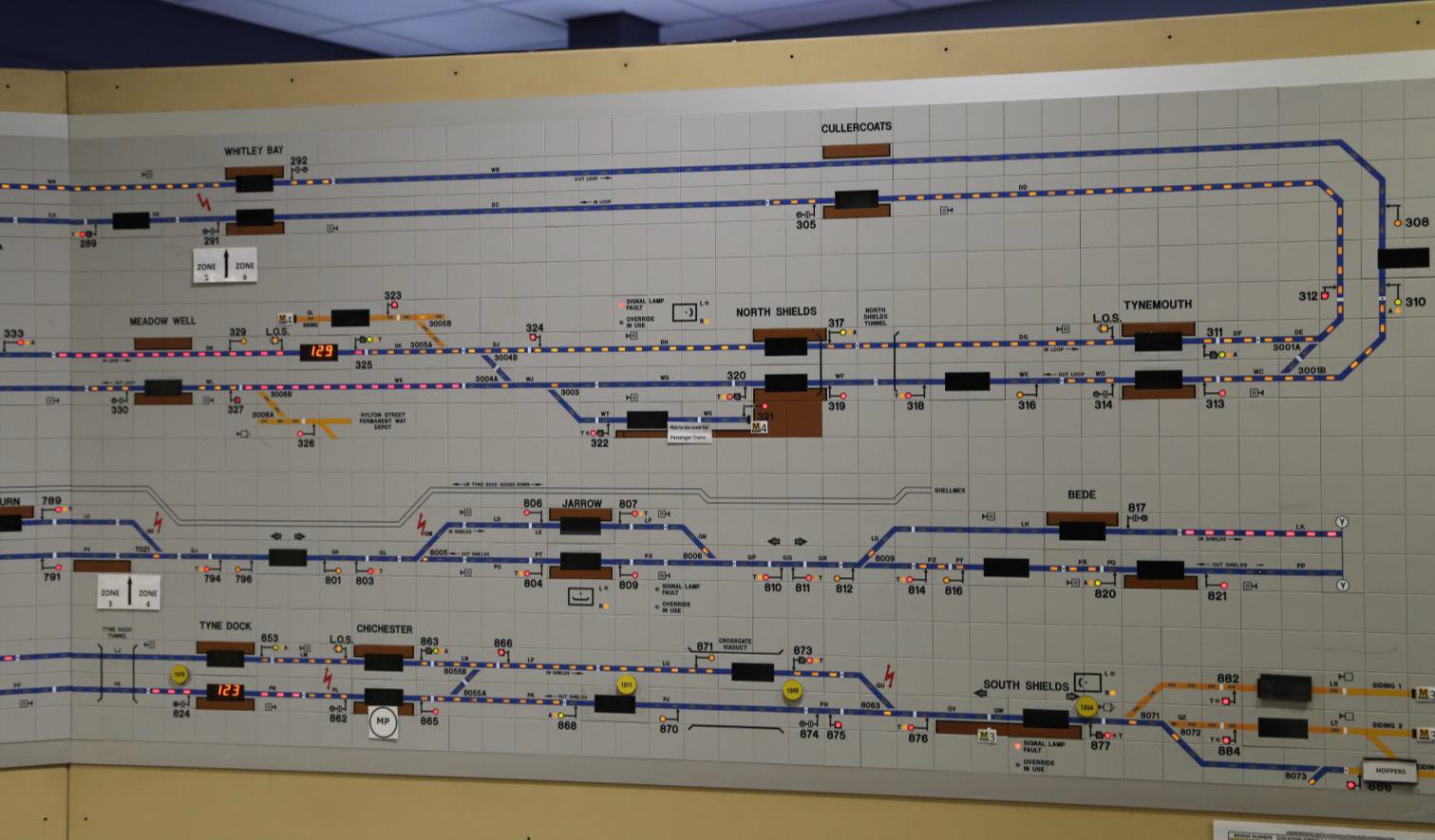 The right one third of the large panel in the control centre.
[© Donald Stirling 2015]

The system and panel are due to be replaced in about 18 months with a VDU based control, although the exact details are not yet known. As well as the panel and signalling equipment, the room houses a bank of CCTV monitors. These display various busy locations at stations across the network and the staff monitor them for potential trouble or problems. They are able to switch to any of the 600 CCTV cameras on the system and the same staff make non-automated announcements at stations and take enquiries from passenger station intercoms. The control also houses the equipment that monitors the network power supply.

The Duty Manager answered questions and was thanked warmly for a very interesting and enjoyable visit. As a result of which £120 was raised for Percy Hedley, a local charity chosen by the Metro supporting disabled adults and children. Thanks also to our Derby member John Cameron for arranging this 'different' visit; his first one! Most of the group had day rover tickets, allowing them to experience the impressive T&W Metro first hand before and after the visit.

More of Donald Stirling's superb pictures of the visit: http://goo.gl/8xacb8