After meeting some participants off trains at Perth the day started at the modern looking but actually 1961 built Stanley Jct. box; formerly for Forfar and Aberdeen etc. (CP 4 September 1967 and CA beyond Forfar; some society brakevan trips and tours ran before the latter CG 7 June 1982). This much reduced box only controls the end of the double track from Perth where Down trains can be set back and recessed on the Up line. Seven miles north of Perth and a contemporary of the latter's Power Box, it uses levers and track circuit or tokenless block to control motorised points and colour light signals. The 45 lever Steven’s frame, the modern Tokenless Block instruments and an Individual Function Switch (IFS) panel were of interest. 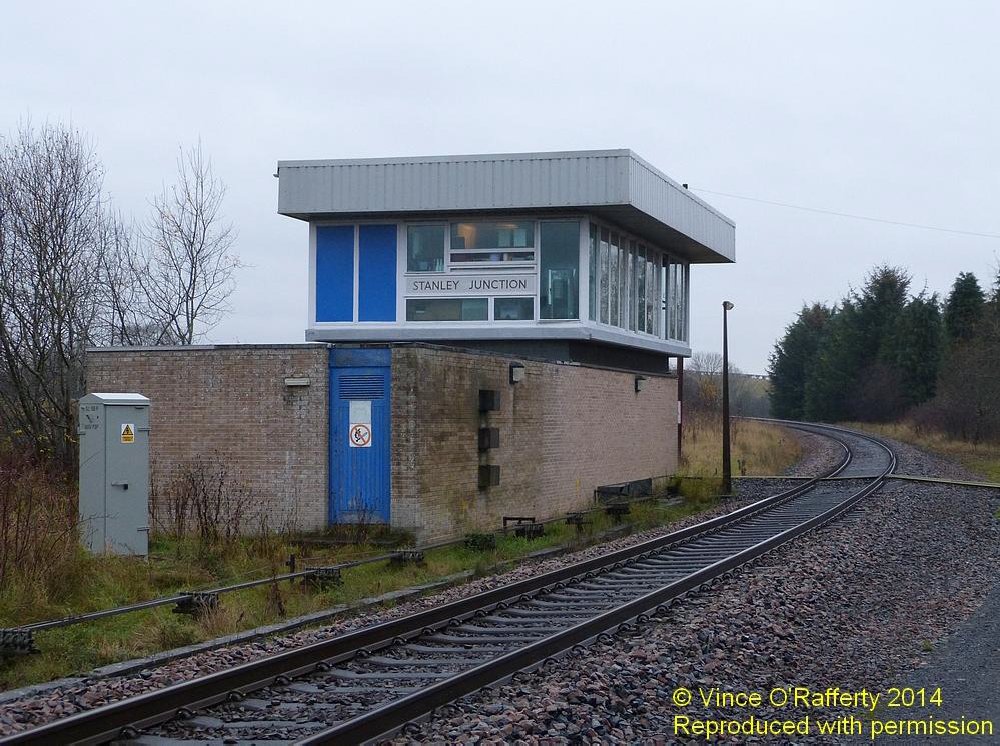 The 1961 built Stanley Junction signal box on 22 November 2014, looking north.The former Caledonian main line to Forfar, Kinnaber Jct. and
Aberdeen went straight on to the right; the single track Highland main line to Dunkeld & Birnam (and Inverness) still continues left.
The only 'junction' now is where double track from Perth becomes a single here, this and Stanley station were to the left of the photographer.

Dunkeld box was next at Dunkeld & Birnam station. A conventional brick and timber box with a relatively recent corrugated metal roof and double-glazed windows but traditional vertical beading to the woodwork; originally a 35 lever McKenzie & Holland (McK&H) frame and IFS. It had similar instruments to Stanley Jct. Some nice lattice post semaphores were seen, the particularly tall Up Starter having an unusual arc shaped metal 'stop' to preventing it rising too far and 'looping the loop' ! There was a disused tablet/token exchange platform. Downstairs the electro-mechanical interlocking was visited. 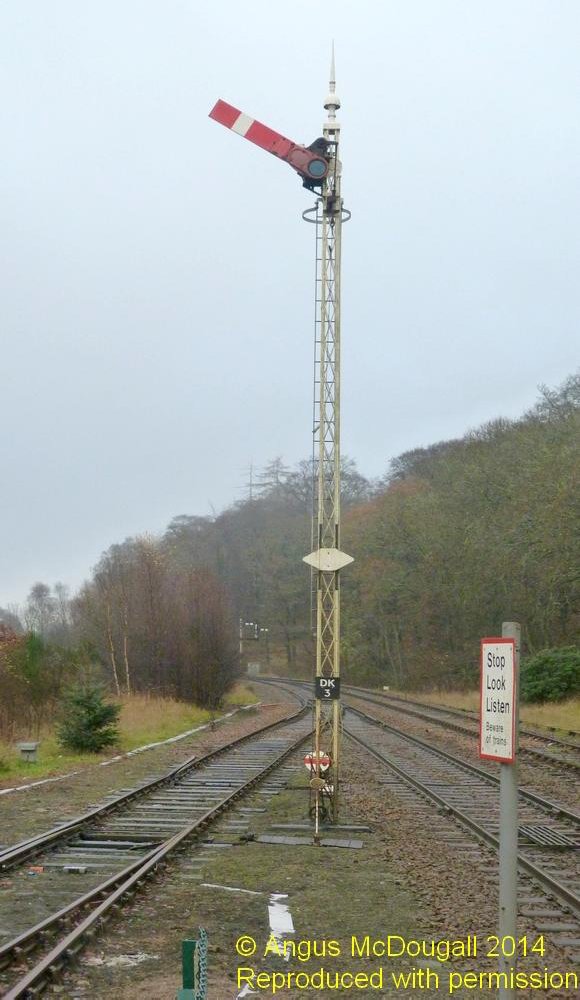 Dunkeld and Birnam on the Highland main line was the northern terminus of the
Perth and Dunkeld Railway until the opening of the Inverness and Perth Junction
Railway on 1 June 1863. The unusually tall up starting signal here is
one of the diminishing number of lattice post semaphores remaining.

Isolated Dalwhinnie was next, bigger than Dunkeld, a modernised wooden construction on a brick base with double glazing (essential here!) and a tiled roof. A 20 lever McK&H frame with IFS panel was in place but there were Tyers’ frame castings in the locking room (with 'NER YORK' cast lettering), along with an old-style but actually new and not yet installed cable tensioning wheel. A more conventional magnetic needle block instrument at the Blair Atholl end and modern block instruments at the Kingussie end of the frame in the cabin were also noted. There are standard BR upper quadrant signals controlling part of the section that was redoubled over Druimuachdar Summit (at 1,484ft the highest location on NR) in the 1970s from Blair Atholl during the North Sea oil boom and can signal up to three trains at once in the same direction.

Kingussie box is an all-wooden structure to the north of the station on the Up side with galvanised steel steps up to the cabin and a privy extension at one end. A corrugated roof but no double glazing completes the structure. The compact 18 lever frame has a horizontal straight locking bar frame and electro-mechanical interlocking. The 'electrics' and 'electronics' look quite modern too, maybe from after the 2013 flooding. The Dalwhinnie end block instruments look modern and there is just an enunciator bell at the Aviemore end. The box also controls the level crossing north of the station under direct vision. A CCTV monitor gives an excellent view of the south of the station facing Aviemore, allowing the signalman to check Down trains are complete.

Aviemore has a wooden exterior and a corrugated metal roof with galvanised metal steps to the cabin and double-glazing. There is a 1971 McK&H 30 lever frame working the station area in the middle of the 1979 vintage 'NX' (entrance/exit) panel (only BR could do that!) also installed in the large cabin at a skew angle across the width of the cabin floor. The latter controls the section from Kingussie to the south edge of the Inverness panel area but not Aviemore (it works 'NX' to the adjacent Aviemore station frame!); possibly a unique situation? There are loops at Kincraig, Carr Bridge, Slochd, Tomatin and Moy (the last two only 3¼ miles apart) some added for the 1970s' upgrade. The frame had several white (spare) levers and as well as the station area it controls the Strathspey Railway connection (used mainly by the Royal Scotsman but only ECS!), via a brown king lever, points and signals. The locking room contained upgraded electronics, electrics and the usual mechanicals.

Participants in this interesting and enjoyable day donated £275 to a local children's charity as a 'thank you'.