Three-car Class 150 DMU 150927 was presented for service for the second joint collaboration railtour between the Branch Line Society and The Locomotive & Carriage Institution, when 160 members of both organisations enjoyed a highly unusual day out railtouring courtesy of First Great Western. Unlike March, the weather was on our side this time as the highly successful fixture helped raise just over of £1550 for charity, with £500 being donated to The Railway Mission and £1050 to Railway Children.

Leaving platform 4 of Bristol Temple Meads a few minutes down we unexpectedly reversed on the Down Through as Network Rail has advised there were no facing point locks on the carriage line at Bedminster, and therefore permission was refused. After a prompt reversal we were able to enjoy our first highlight of the day, the highly sought after Goods Avoiding Line past St Phillip's Marsh depot. Both Class 08 depot shunters were visible going about their duties as were various "internal user" vehicles including the Mark 1 Cinema Coach and Mark II training coach 5636.

Back at Bristol running nearly 6 minutes early, we proceeded along the "Down Through", before making our way to Yatton to traverse the Down Loop. Travelling via Weston-Super-Mare platform 1 we arrived at Taunton and took the opportunity for a photo stop, leg stretch and convenience break. Ad hoc comfort breaks were to become a feature of our day! At first it was thought the unit had not been tanked, however it later turned out to be a fault on the flushing mechanism which could not be repaired despite fitters attention later at Laira. 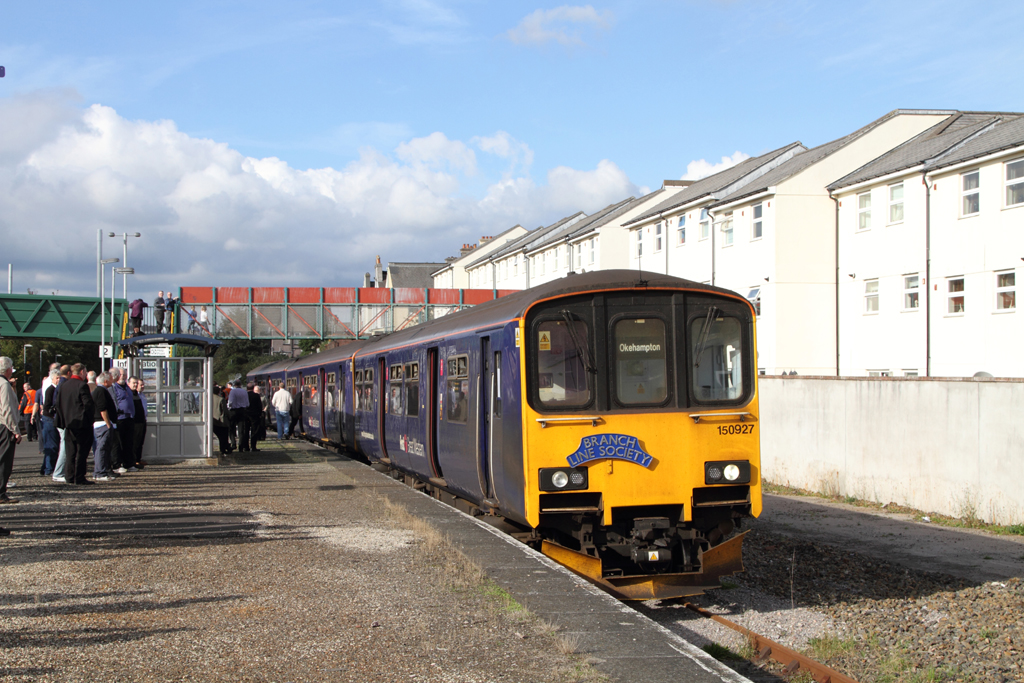 With a booked crew change complete, we set away for our final pick up at the bay platform of Exeter St David's taking in the Goods Reception line at Fairwater Yard and Tiverton Down Passenger Loop on the way. Tiverton DPL was a loss from the March charter due to a track circuit fault so we were pleased to "claw back". After reversal in platform 2, we were able to enjoy an "on the day" bonus with thanks to the local Operations Manager and proceeded into Hyde Park Siding – a real bonus for our passengers.

Our next port of call was Exeter New Yard (aka Waterloo Yard). Having missed Road 1 last time due to a Class 159 being present, we were able to complete all three roads on this visit, again including the shunt spur – what more could we ask for!

Away from Exeter St David's 23 minutes late, we proceeded along the highly scenic sea wall, observing the Great Western liveried camping coaches still used for holiday makers at Dawlish Warren and managed by the Great Western Railway Staff Association. After passing through Totnes we proceeded to Tavistock Junction G.F. to perform a reversal and access Tavistock Junction Down Refuge, this being an addition to our previous visit. At Laira Junction, we travelled firstly to the buffers on Lipson Siding No 3 which was to be used as a secure compound for the Nightstar project. After a double reversal, we took Embankment Siding No 2 and avoided the carriage washer by taking the Up road down to the end of the line at Plymouth Friary. 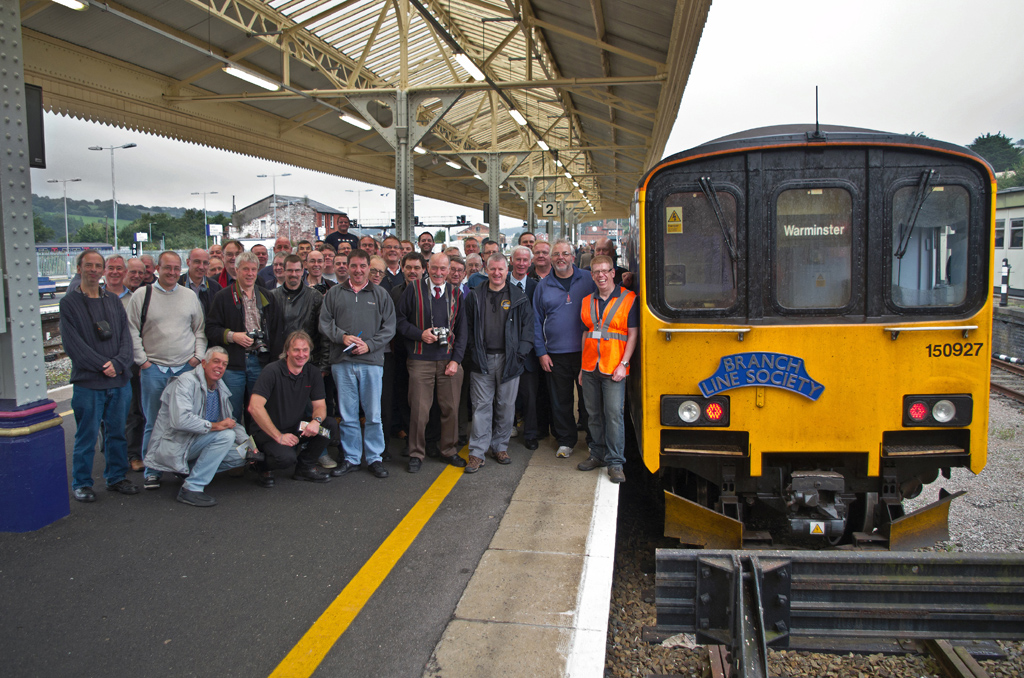 Group shot of participants in the BLS "Great Western Tracker II" tour, at this point running as 2Z10, 07:40 from
Bristol Temple Meads, with 150 927 at Exeter St. David's Platform 2 just prior to reversing into Exeter New Yard.

As if to again tease us at this point, we could only look longingly at the Cattewater branch which remains a target for traversal. As efficiently as ever, the road was set for us to head out towards Plymouth and the theatre box was checked to ensure we "got" the Up road at Speedway Jn, being the required route into Plymouth for many passengers, including a well-travelled guard from Northern Trains and long standing member that was with us for the day for that section of track.

We reached Plymouth No 3 Dock 21 minutes late so a prompt reversal was arranged into the head shunt and continuation into platform 4 for a well-earned leg stretch and comfort break. Departing 1 minute late (due to the slowest coffee machine in the world) we headed further West to Keyham, where we were booked to reverse on the Down and run into the Up Yard siding which maintains a platform face with Keyham station. However, despite repeated efforts, the Network Rail team on the ground could not "get" the points (later revealed as an earth fault) so an impromptu run over the bridge into Cornwall was arranged for a reversal in the Down Platform and Up departure from Saltash. A certain directionality enthusiast from Retford would have been delighted if he had been able to travel with us. This move allowed us still to access the yard in the Up direction, which was duly completed and a photographic stop arranged at the platform whilst Network Rail prepared the road back to Plymouth. Extremely well-mannered local children, fascinated by the arrival of a passenger train in that side of the platform, went home that day with a few souvenirs from the charter, very much to their delight!

Once away, the Plymouth Through Line was completed as were the delights of Hemerdon Goods Loop . On arrival at Totnes, we completed the West End Siding in full before reversing and running to the buffers at the long East End Refuge, much to the merriment of well-wishers and enthusiasts enjoying Totnes Littlehempston station on the beautiful South Devon Railway, host to a Branch Line Society rare track charter earlier in the year. By now, a further comfort stop was required and we briefly called at Totnes platform 2. 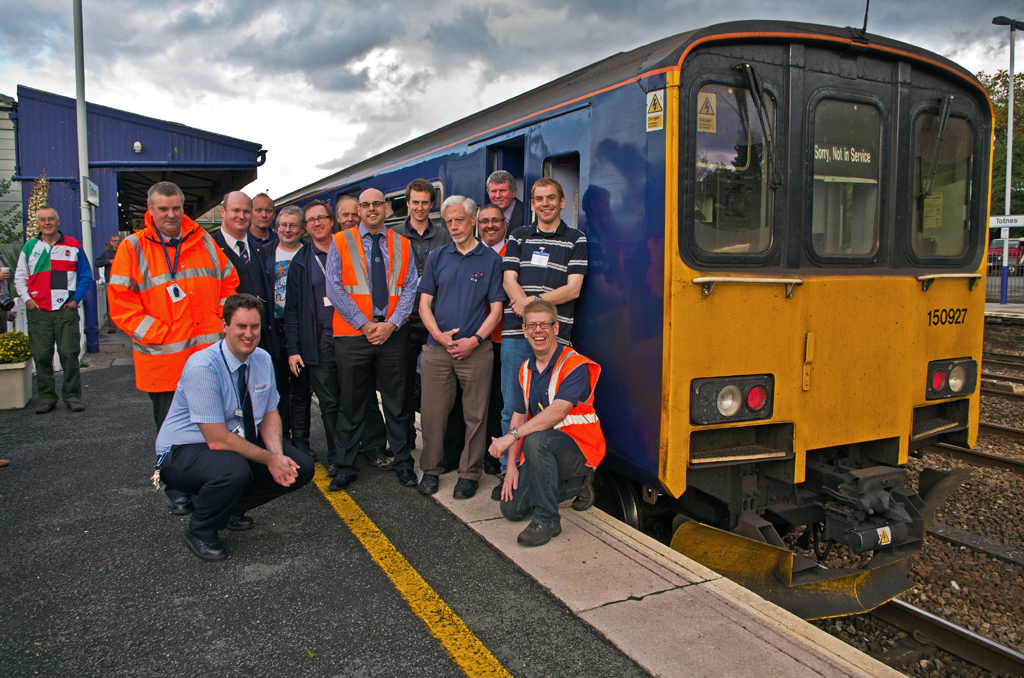 FGW train staff and BLS stewards pose alongside 150 927 at Totnes station in the up platform 2 during the running
of the Great Western Tracker II tour. At this stage the tour was running as 2Z12, 14:30 from Plymouth to Goodrington
C.H.S and was keeping Railtour Standard Time - about 60 minutes late! Time was made up later however.

Our next target was the Heathfield branch, being only partially completed in March due to flooding. On this occasion, all was well and we reached the very end of the line before reversing and running directly into the former Newton Abbot bay platform 9 now used for stabling the Colas locomotive off the Teingrace to Chirk timber trains, being the former Motorail platform. As this was a "re-run", it was only fair we delivered this extremely rare piece of track having performed this manoeuvre back in March due to the flooding.

After pausing briefly in Newton Abbot station, Goodrington Sands sidings called, being the highlight of the day for many who participated in the first Great Western Tracker. Routing out via platform 1 at Paignton and back via platform 2, we reached the very end of the line on the sidings reception road just as the light was starting to fade. Departure from Paignton was a mere 10 minutes late, and a lively run to Newton Abbot ensured we got put out in front of a Paddington bound HST, much to everyone's amusement!

With our first set down at Exeter St David's platform 5, a comfort break was again taken and we set away just 4 minutes down. We completed Tiverton Up Loop as expected then took in Highbridge Up Goods Loop on our way to Weston-Super-Mare and Bristol via Yatton Up Loop.

Of course, every good tour needs a finale, so we took the Up Relief at Parson Street from the first available crossover and stayed "relief" through to Bristol Temple Meads where we took the Up Through, before reversing at Bristol East Jn and terminating in platform 9 only one minute down. With 302 miles and 61 chains under our belts, we waived our good byes to the train crew, stewards and passengers – and promptly started counting the huge pile of booking forms we had collated during the day for the Power Haul Tracker on 3rd November!

To conclude, thanks must go out to everyone who made this very special charter happen – not least of all Stuart Smith, a Driver for First Great Western at Plymouth, Editor of The Locomotive & Carriage Institution newsletter and not least a prominent BLS member, who was the original "driver" behind this fixture. The list of those to thank is almost endless. First Great Western continue to be impressed with the level of interest in their operations, and as you would expect, discussions are underway as to where we could go next together…. 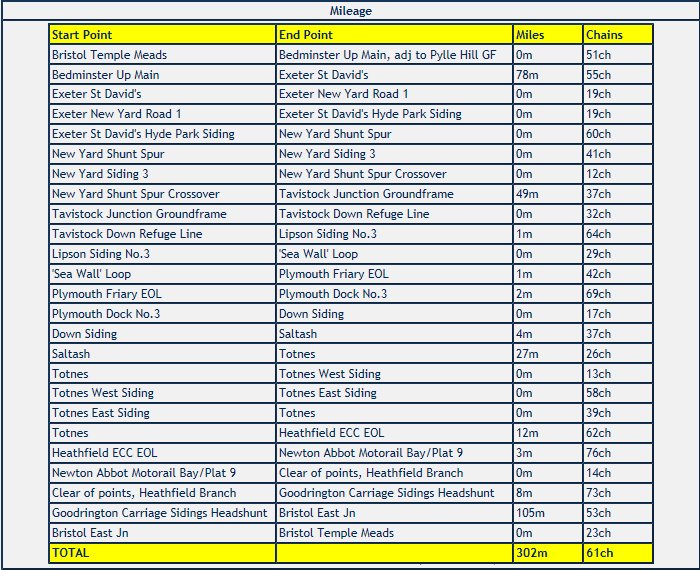 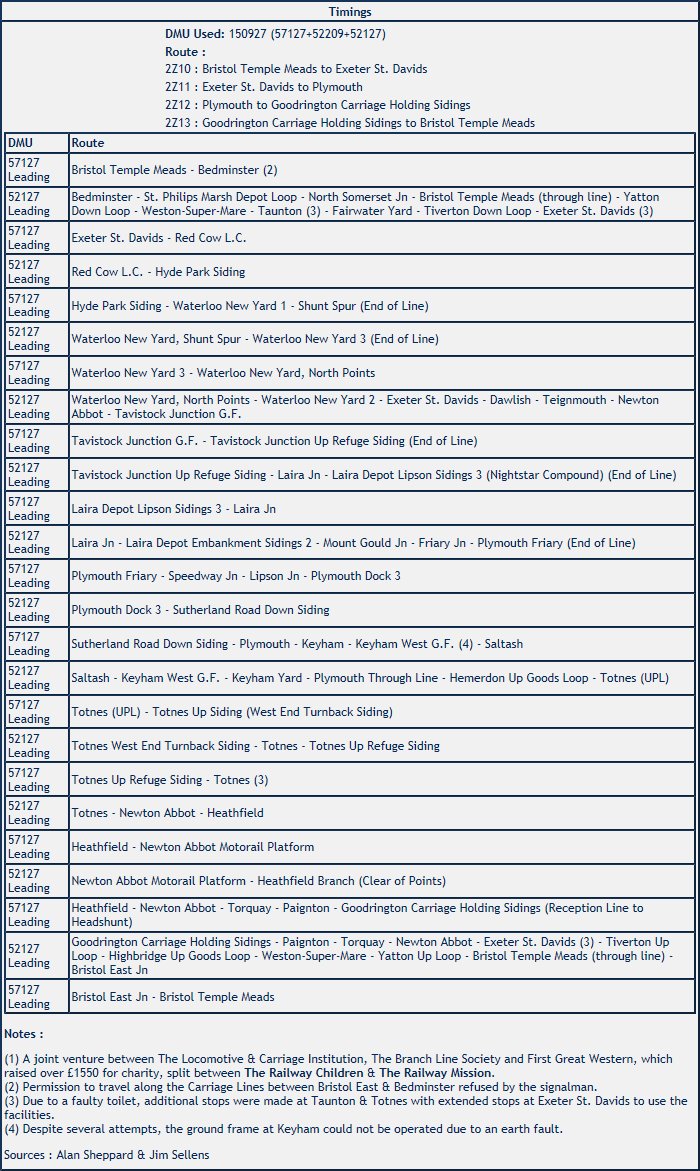 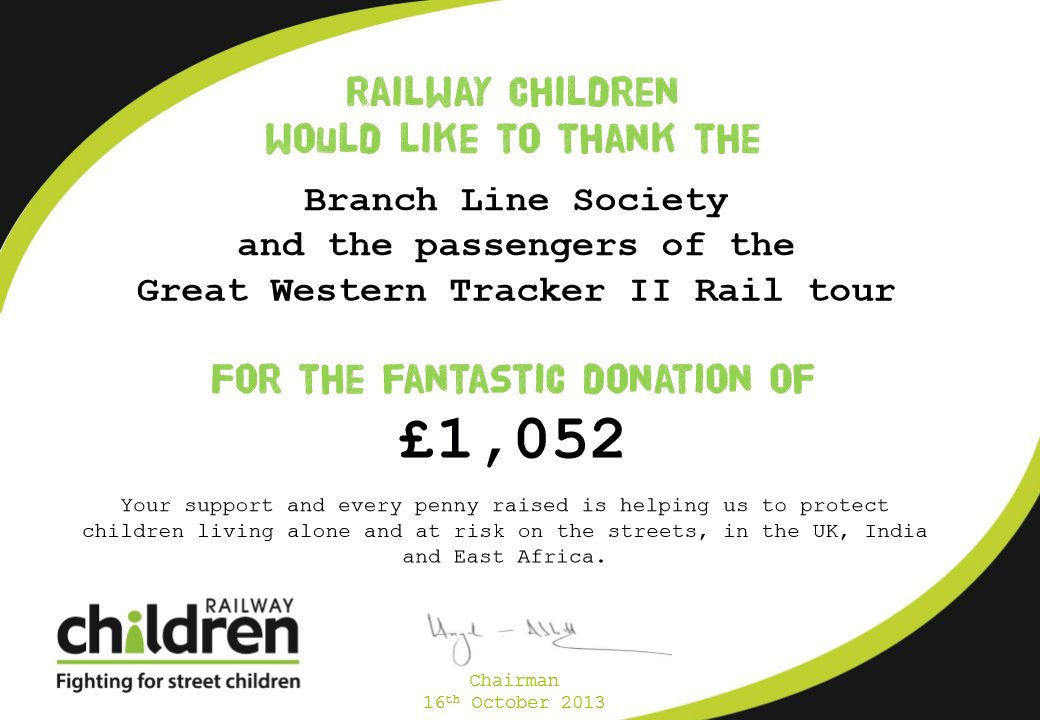