The Society ran another Train Operating Company based Tracker charter on Sunday 26th May, with an on-time departure from Marylebone and nearly 200 people on board Chiltern Railways' DMU number 168107, at 11.05. The comprehensive track coverage saw the tour visit sidings in Marylebone station, Wembley depot, Wembley turnback siding, Gerrards Cross turnback sidings, Aylesbury depot, traversal of the Thame branch to the end of the line, Princes Risborough engineers' sidings and Bicester turnback siding amongst many other rare track highlights. The tour, facilitated by Chiltern Railways who provided the unit and organised, with BLS input, the route was also made possible by the superb support from Network Rail both on the ground and in the signalbox at Marylebone. 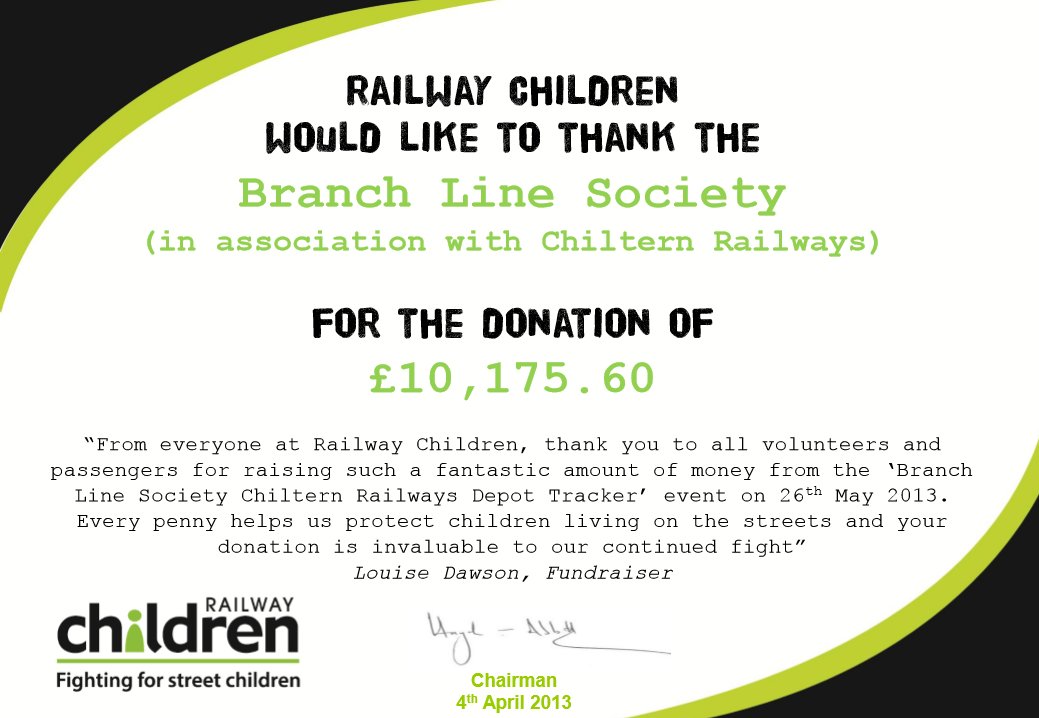 Chiltern Railways' staff fully entered into the spirit of the tour and special mention must be made and thanks passed to Paul Clewlow from Chiltern Railways who assisted greatly in the initial planning and on the day operation of the tour. All the organisations involved in the running of the tour provided their services free and, with the on board raffles, enabled the tour to raise over £10,000 for the Railway Children Charity. The tour returned to Marylebone a few minutes early having spent a leisurely day in glorious sunshine wandering around the southern part of the Chiltern Railways network. 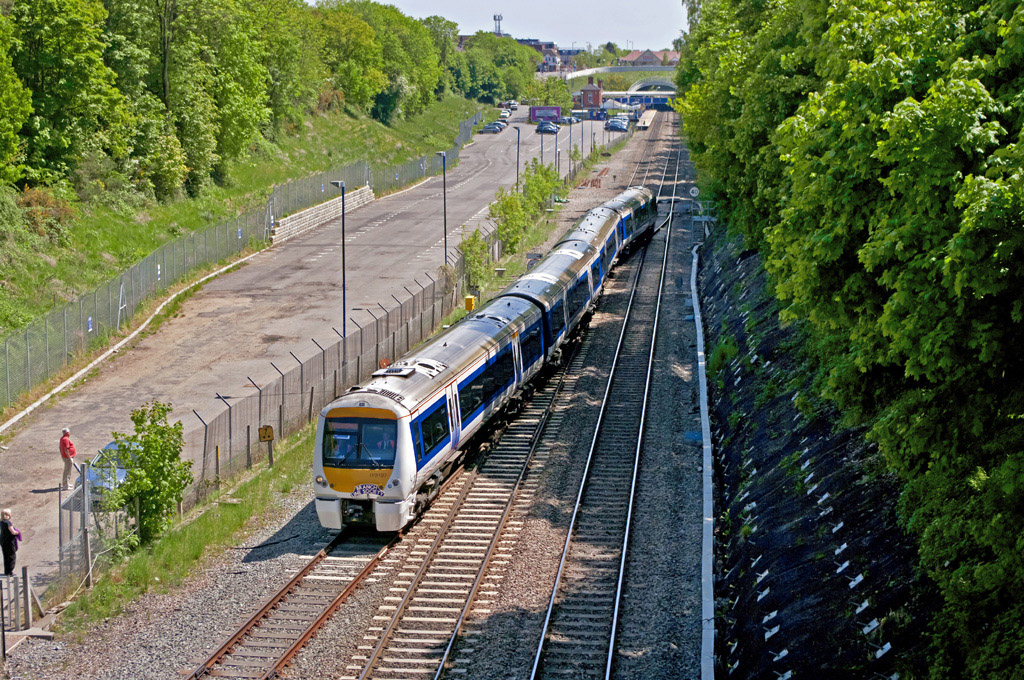 168107 Gerrards Cross Siding.
Having now worked from Neasden South Junction via West Ruislip up platform (in the down direction), 168 107 with the BLS charter passes milepost 7
(from Northolt Junction) as it crosses from the down line to the up line and into the turnback siding at Gerrards Cross. This siding is normally used by trains
terminating at Gerrards Cross and running ECS to the siding before returning to Marylebone. For a while it was also used by aggregates trains bringing in
material for the notorious "Tesco Tunnel" prior to its collapse - the tunnel can be seen in the far distance beyond the station. 13:08, Sunday 26th May 2013.
Copyright remains with the photographer and downloaded images can only be used for private / personal use only. http://plumbloco.smugmug.com
[© Geoff Plumb 2013] 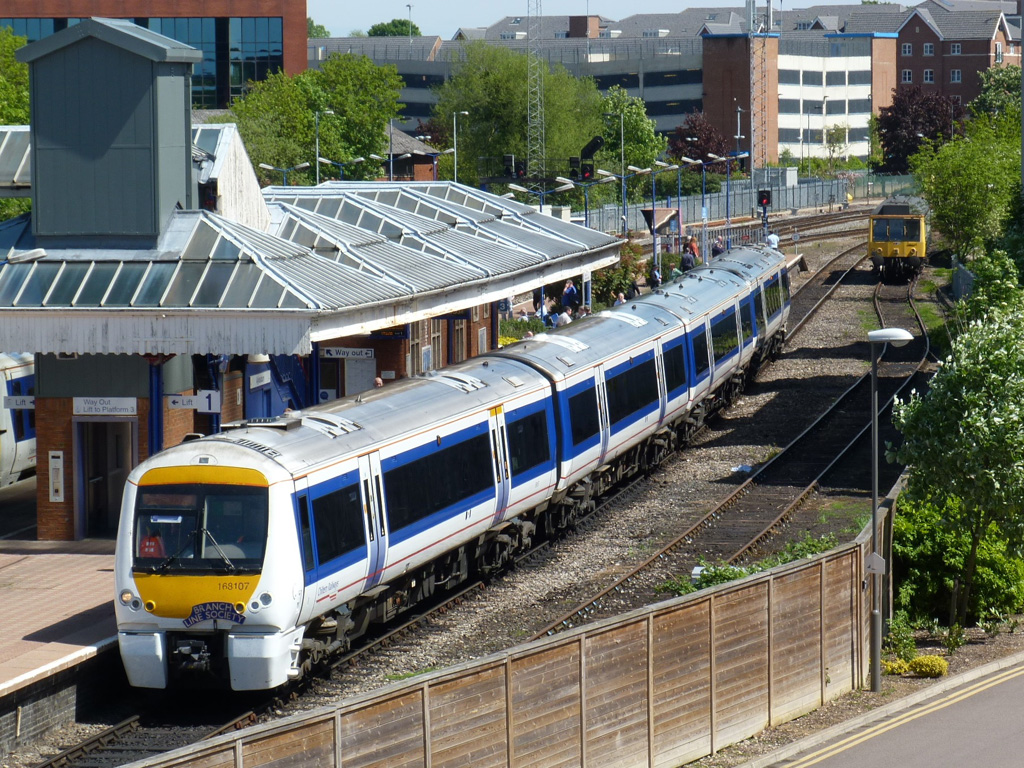 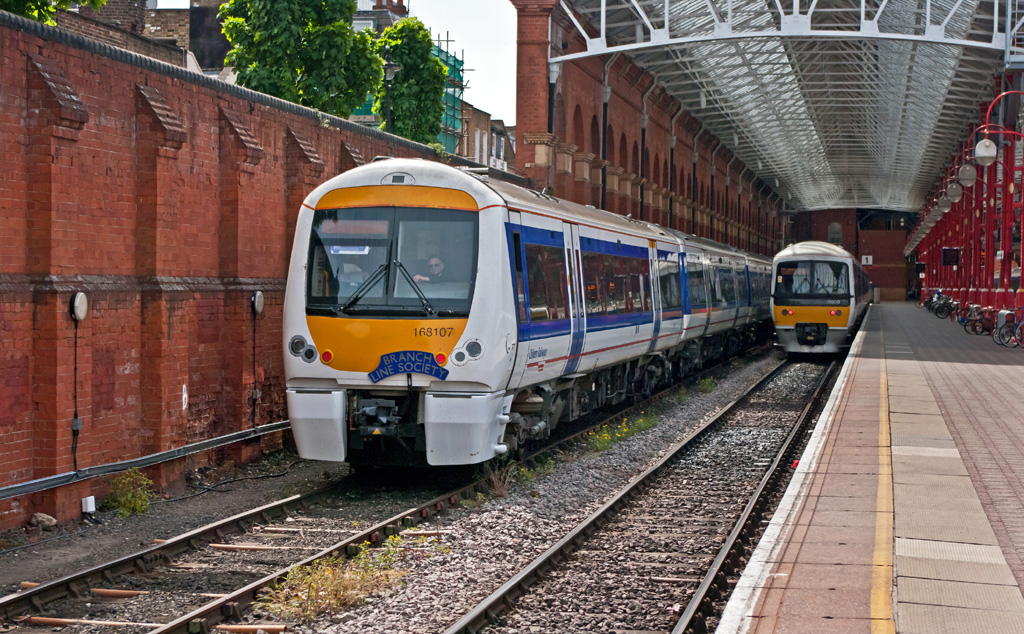 168107 Marylebone WallSiding
I was unable to get to Marylebone for the initial departure of this train due to being further north for "Steam on the Met". Chiltern Railways, in
conjunction with the Branch Line Society, ran a special excursion, "The Chiltern Depot Tracker", with the proceeds going to the Railway Children
Charity. Initially running as 1Z21, the 11:05 from Marylebone to Gerrards Cross Siding, the train was to visit many stretches of track not normally
used by trains with passengers on board. The first move was from Marylebone station to the upside tunnel siding, just north of the station. The
next port of call was the Wall siding at Marylebone station where the train is seen making its way from the tunnel siding to the bufferstops in the
station, alongside 165 018 in Platform 1. This siding is normally only used to stable empty stock between duties. 11:15, Sunday 26th May 2013.
The train was already running early and this became a feature of the day.
[© Geoff Plumb 2013] 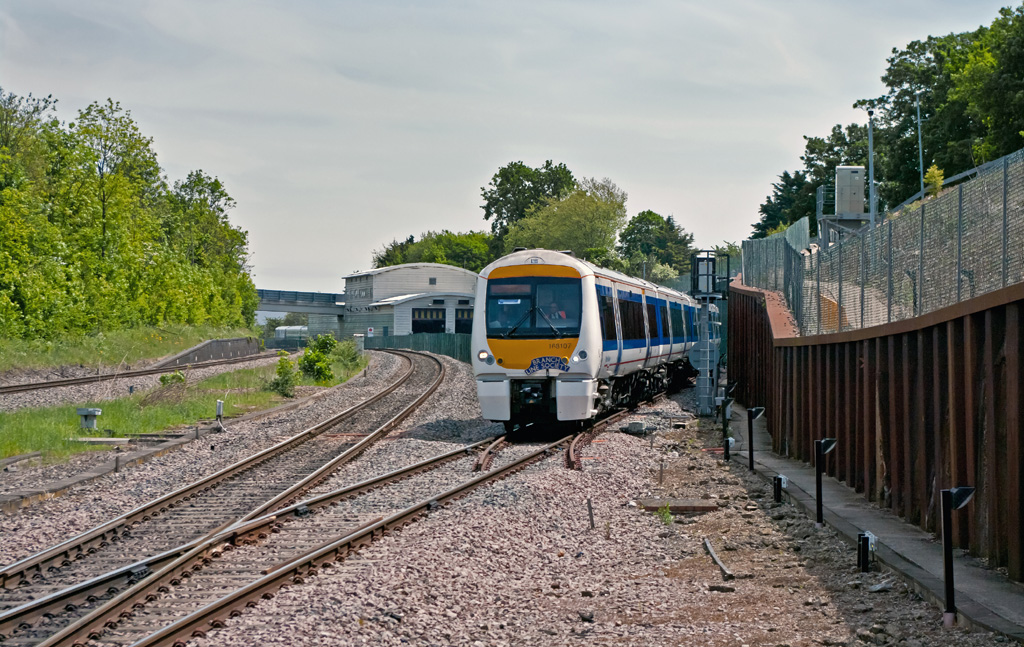 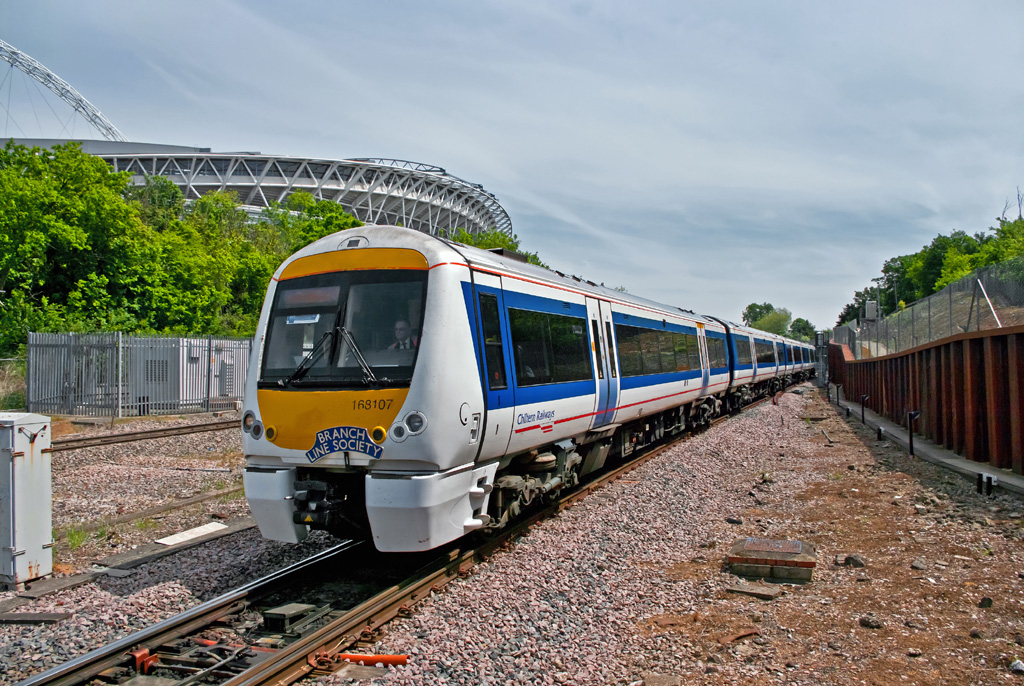 168107 Wembley LMD
Signal ME363 at the exit from Wembley LMD cleared for the train some minutes early (scheduled at 12:27) and the BLS special with 168 107 now
comes out of the depot onto the down main line with Wembley Stadium alongside. The train is now on its way to the next non-passenger stretch
of track, the turnback siding just west of Wembley Stadium station. 12:21, Sunday 26th May 2013.
[© Geoff Plumb 2013] 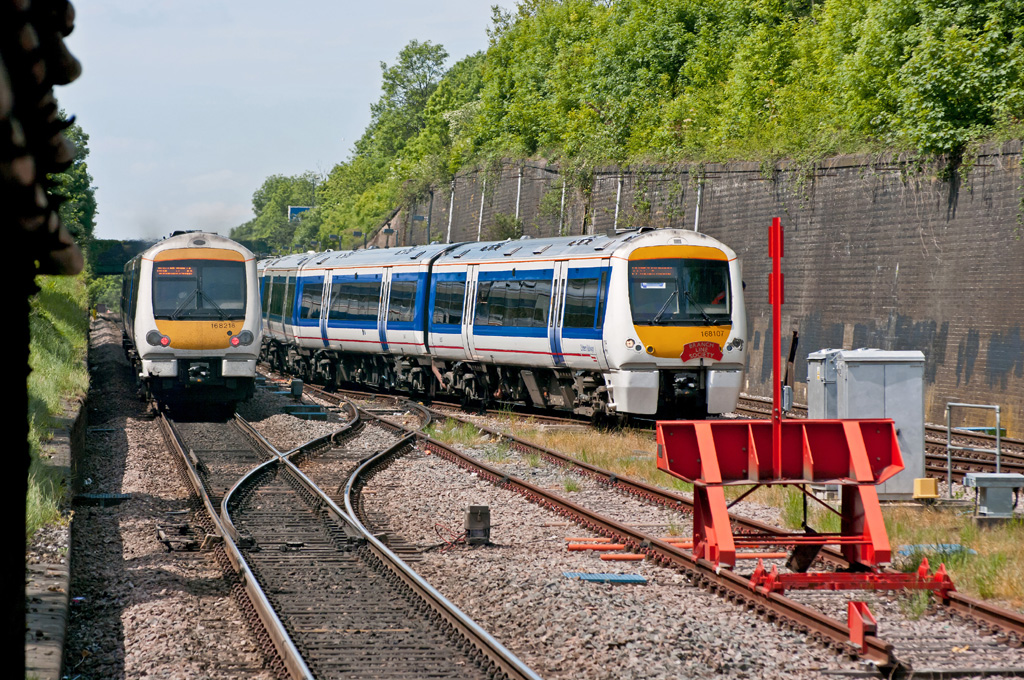 168107 Wembley Siding
As 168 218 heads northwards non-stop through Wembley Stadium with 1R30, the 12:33 from Marylebone to Birmingham Moor Street service,
168 107 is heading out of the turnback siding onto the up line to make for Neasden South Junction and a further reversal before going on to
Gerrards Cross turnback siding. 12:41, Sunday 26th May 2013.
[© Geoff Plumb 2013] 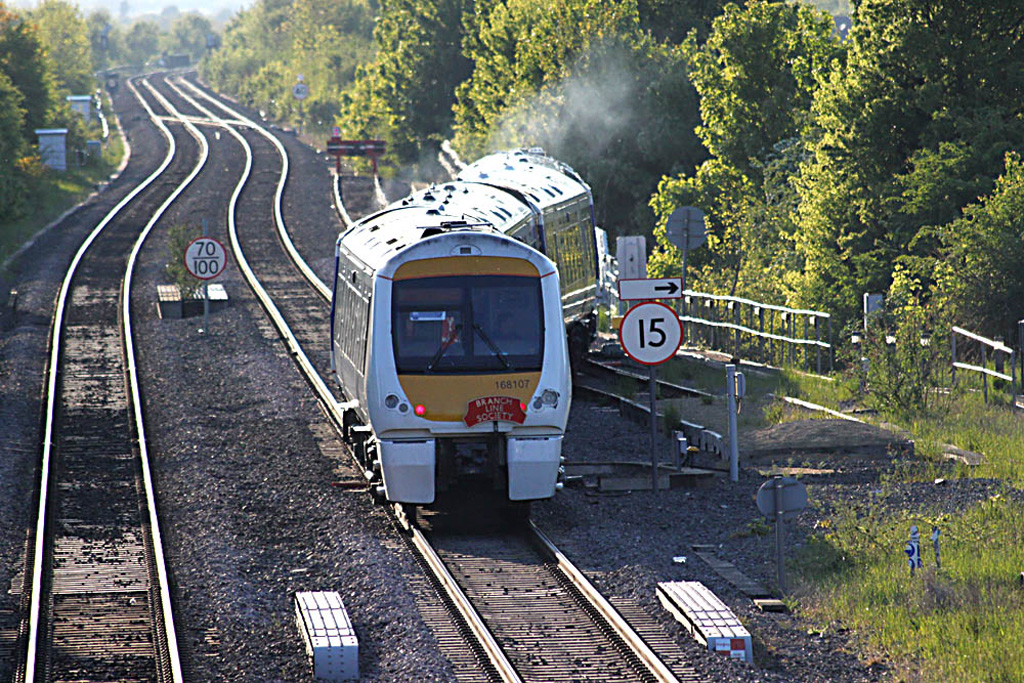 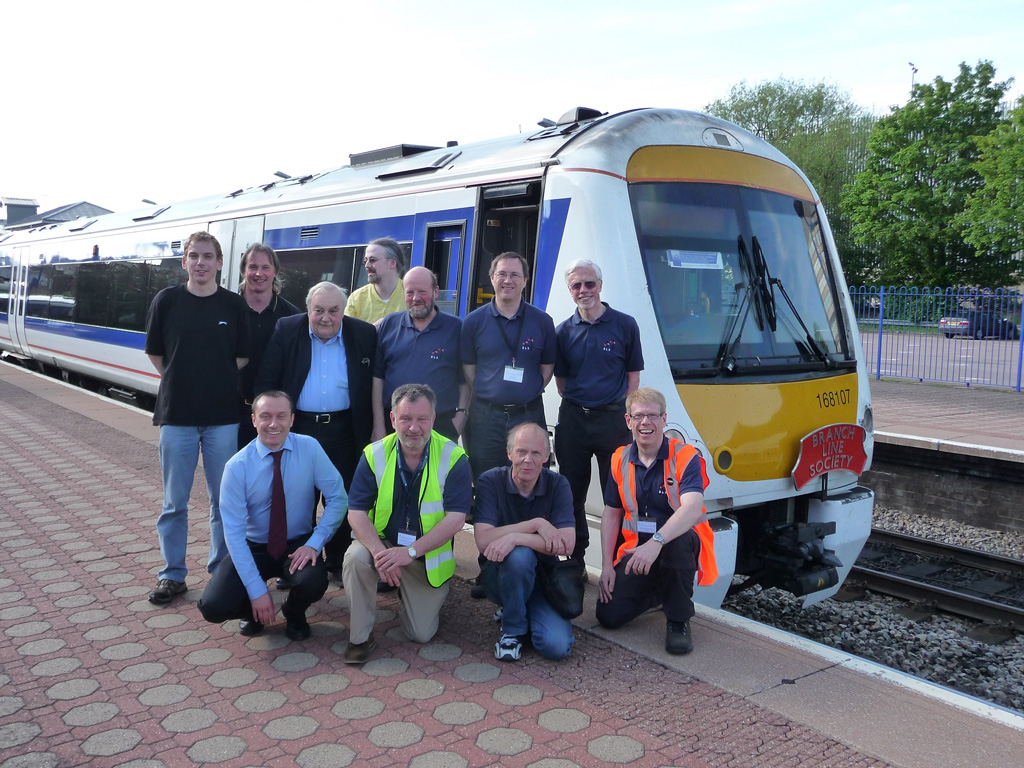 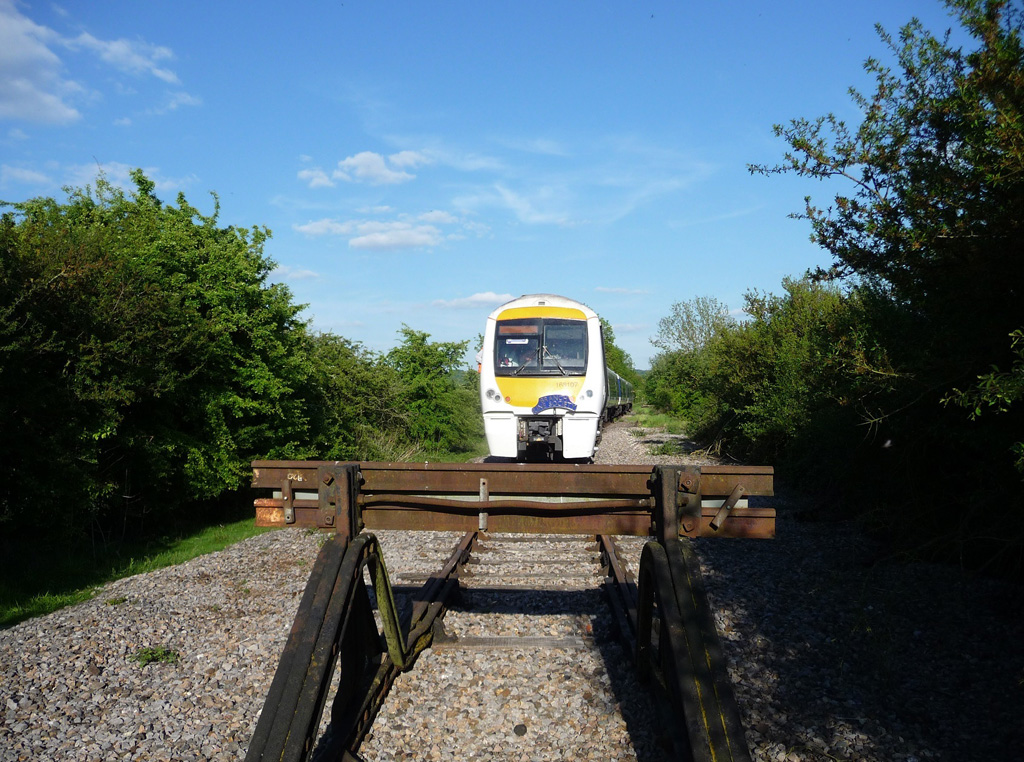 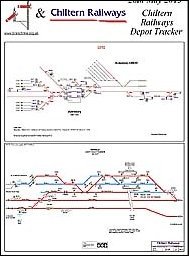 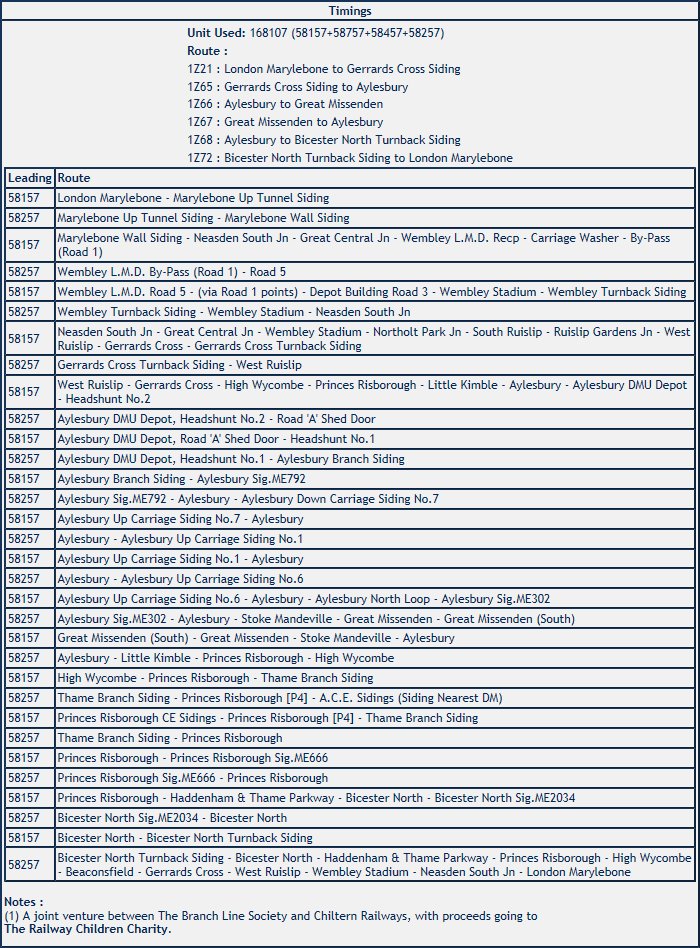 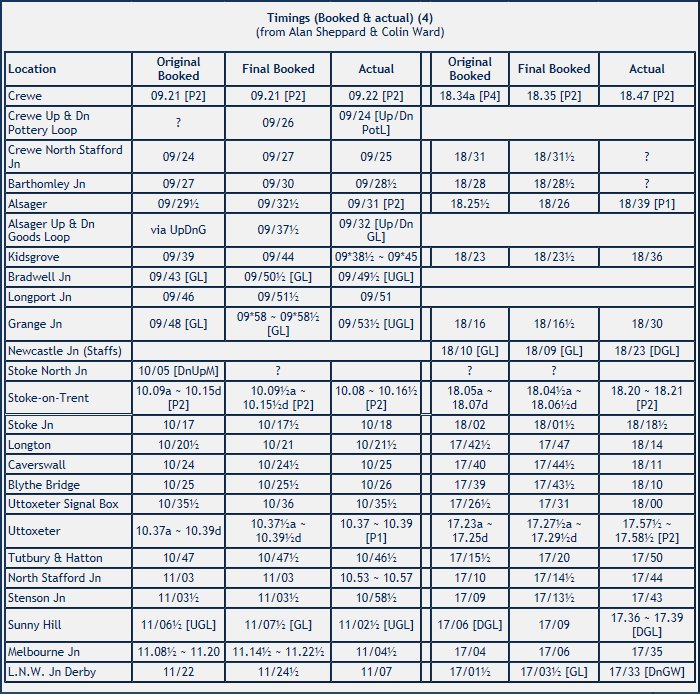