The Yorkshireman - the Society's first ever railtour
Sunday 2nd June 1957

Report by I. Hurst 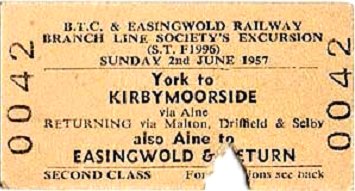 Sunday June 2nd saw the first major-rail-tour organised by the Society – The Yorkshireman - a special train covering closed lines in Yorkshire and including a trip over the Easingwold Railway. The train was made up of 5 open coaches including an ex-N.E.R. buffet car, and motive power was provided by D20 4-4-0 No. 62387 specially cleaned and carrying the Society's headboard. The departure was delayed for some 55 minutes owing to the late running of an excursion from Liverpool, and we finally left at 1.25p.m. By Poppleton J. Driver C. Snowden had very capably worked our D20 up to 50 m.p.h., and we continued at good speeds through Beningbrough and Tollerton to the stop at Alne, by which time some 8 minutes had been regained. Here a crowd of local people and pressmen were waiting to see us off on our trip over the Easingwold Railway. Indemnity forms were handed over and photographing passengers climbed, with or without the aid of ladders, into the train. This consisted of J72 0-6-0T No. 67926, 10 open trucks (not fitted) and an ex-L.N.E.R. parcels van lettered "on loan to the Easingwold Railway”! 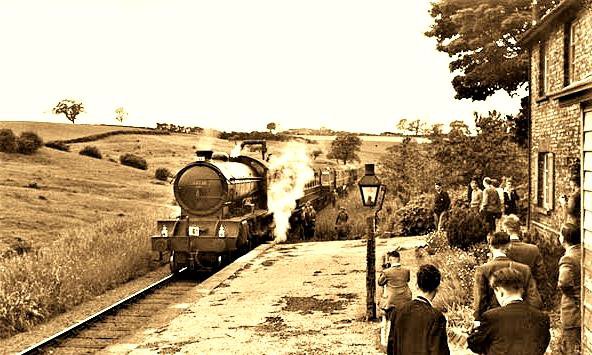 'The Yorkshireman' between Malton and Driffield at Wharram, and how different things were in
1957 (although the picture could almost pass for 1857)! Our train has stopped for water just
before the station allowing participants to alight/literally jump down (note open doors) to
take photos from the platform - looking (very appropriately) northeast towards Malton.
[© Dean Phillips]

To cheers from the onlookers and the sound of 3 detonators exploding, we moved out on to the weed-grown line, which curves sharply to the right. As we lost sight of the main line, the surroundings became more and more like those of a leafy country lane, with hedges brushing the train, ditches blocked up and the track slumbering peacefully beneath grass and weeds so deep that in places the engine's coupling-rods were pushing the grass aside. At both of the intermediate road-crossings there were crowds of local people and cameramen. When Easingwold was reached, the whole town, it seemed, had turned out to see us. We ran in past the disused loco. depot to the station, where one enterprising salesman had installed himself with soft drinks for our benefit. The booking office was open selling specimen tickets which proved very popular. We inspected the station and yard, unearthing N.E.R. labels, an ancient timetable and other interesting items. Traffic for the line seemed quite good, with at least a dozen goods wagons in the yard. We returned to Alne having lost even more time, and rejoined the main train.

A quick run over the 3½ miles from Alne saw us passing Bishopstone J., site of the Pilmoor South Curve, and drawing to a halt at Pilmoor South Box. Here our D20 ran round and continued tender-first away up the closed Gilling branch on single track from Sunbeck Box. The ruins of Husthwaite Gate station were passed and we were soon slowing for the token change at Coxwold. Ampleforth was passed and the train stopped at Gilling for water. The station buildings and bridge all seemed to be in good condition although the signalman had some difficulty in pulling off our starting signal. Surprise at this was soon quietened when it was learnt that no-one usually bothered about such formalities.

Leaving Gilling the Kirby Moorside line runs parallel to the Malton branch for about one mile to Stonegrave. Here the Malton line was left behind as climbing steeply at 1 in 91 we curved first NW and then E through Nunnington to a halt at Helmsley. After a ten minute photographic stop we continued through some fine scenery to Nawton and Kirby Moorside. The latter is now the terminus of the line, the track having been lifted from here to Pickering. 62387 ran round, but a word with Driver Snowden elucidated the fact that all was not well with her and it became apparent that the train would run very late. However, a fairly fast run back down the branch to Gilling was made, and after a further run round we left on the Malton line (closed to passengers 1st Jan 1931). Most of the intermediate stations on this section have had their platforms partly demolished, and with only three freight trains a week its life seemed somewhat doubtful. We ran through Hovingham Spa, Slingsby, Barton-le-Street and Amotherby, and at each point small groups of local people had gathered to see us pass, whilst on either side of the route magnificent views could be obtained. Soon reached Malton (Scarborough Rd.) where the spur from Malton station joined our line. We did not stop here since a pilot run was required, but continued on through Settrington up the bank to North Grimston.

This station saw a full-stop, the locomotive brake having failed, and the 20 minutes spent here for repairs, effected by judicious use of the coal hammer and a very large spanner, enabled passengers to see the numerous “Best-kept Station” certificates (12 1st’s) in the booking-office. Also on view was the station cat, a large ginger animal, which quite took the heart of one well-known member. Under way again with steam pressure falling, we crawled up the bank through Wharram station with the gradient steepening over stretches of between 1 in 50 and 1 in 71 into Burdale tunnel, just over a mile in length and lined throughout with Malton and Driffield Railway bricks. Some nine minutes were spent traversing this narrow bore before we emerged and passed the remote Burdale station. On easier gradients now we ran down down through Sledmore and Fimber, passing the only signal-box on the line, and off the Wolds at Wetwang. The country now became much flatter and after Garton we were soon approaching Driffield, after a journey of some 85 miles. Driffield West J. saw us join the line from Selby and a few hundred yards later the line from Beverley came in.

At Driffield we ran round, from here to York the writer was privileged to travel on the footplate. Steam was in very short supply and it was apparent that the engine would have to be nursed all the way. Only 120 lbs. were on the gauge when we were pulled out of Driffield lhr. 20 mins late, and. before we could leave arrangements had to be made for a connection to be held at Selby for Leeds and Manchester passengers. A very cautious start was made out past Southburn and Bainton, but despite herculean efforts by the fireman, pressure still fell. Middleton on the Wolds was passed, but on the rising gradients through Enthorpe the brakes began to leak on, pressure being down to 80 lbs. We just passed Enthorpe station, and then stopped to raise steam. Having brought the pressure up to 136 lbs, we started again. A couple of hundred yards passed when a glance back showed us the guard performing like a champion runner in chase of the train, which he had apparently left without applying his own brake. A quick stop enabled him to reach us, and we were soon away again through Market Weighton, Everingham, Holme Moor, Foggathorpe, High Field, Babwith, Menthorpe Gate and the site of Duffield gate to our special stop at Cliffe Common, junction for the Derwent Valley Light Railway, where representatives of that Company joined us for the remainder of the trip to sell us obsolete tickets. On again to Selby, where at Selby East J. signals halted us and a note permitting us to proceed to the station on the same line as the Leeds train was handed up. After this connection had been made, it was decided to run fast to York, the guard and others being informed of this. On we went noting the Cawood branch on our right, and the spur from Brayton J. at Thorpe Gates past Hambleton, to Gascoigne Wood J. Here we took the infrequently spur to Sherburn-in-Elmet and were soon heading for York with 110 lbs of steam and a tender full of dust. Approaching Church Fenton at about 25 m.p.h. we were rudely awakened by the application of the guard’s brake. We stopped, but after a series of interjections soon moved on completing our journey to York without further event and arriving some two hours late. This was unfortunate, but was due to the necessarily late start and very poor coal.

It remains to thank all those who helped to make this trip possible: British Railways N.E. Region Commercial Dept. for all their work, York loco. dept for their attentions to 62387, the Easingwold Railway for all their help, and the Derwent Valley L.R. Co. for sending their official and to the following members of the Society:- E.R.Ebury and G.M. Baxter for their help on the train generally, the latter also for his excellent map; P. Baldwin and Dr.D. Thorpe for assistance with the headboard, members of the Committee for general assistance, and most of all G.C.Lewthwaite to whose efforts the whole tour, including the itinerary was due. 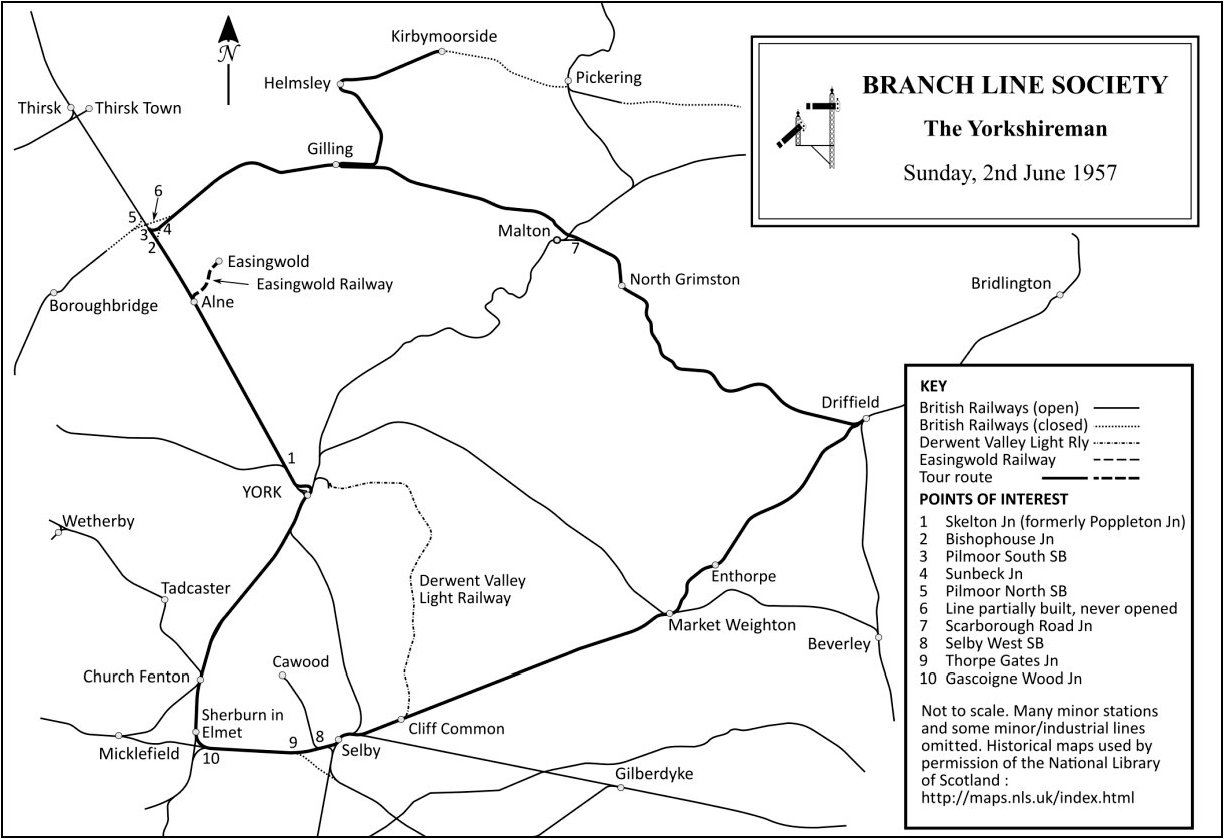